When Ae* saw a stray dog get hit by a car, she decided to take it to a veterinarian. However, when the vet informed her about the expenses, it was too much for her to afford and she took the stray home feeling upset.

This stray dog case is just one of many situations that veterinary student, Nidchakan Jaiboon, has experienced while working at a veterinary clinic. After becoming aware of the problem, the sixth-year student at the Faculty of Veterinary Science, Chulalongkorn University together with her peers Kamonwan Sengsen, Pimpakan Siangruangsaeng and Pimrampa Kao-ian decided to develop a new application titled "RightBaan" (Right Home) to help abandoned cats and dogs find new homes.

Browsing on rightbaan.com, visitors can see photos of cats and dogs from four shelters -- CU Vet Animal Welfare Club at Chulalongkorn University, Vet Tech at Kasetsart University, Worldwide Veterinary Service Thailand or WVS Thailand (Care for dogs) and Soi Dog Thailand. The application provides details of animals, including their names, breeds, gender, age, condition and background. According to a report in 2016 by the Department of Livestock Development, there were 758,446 stray dogs and 474,142 stray cats in the country. This app can help some stray animals to find homes, which will then allow more space to open up space in shelters for other strays.

"Thai people have experienced problems related to stray animals for a long time. These animals sometimes attack, which raises the risk of getting rabies if you are bitten. Moreover, the numbers of stray animals keep increasing each year. We have also noticed that nowadays the size of families is getting smaller and because of that, many like to adopt stray animals and have a pet around to curb their loneliness. However, information about stray animals on the internet is not reliable, especially, about donations which is why we decided to make rightbaan.com to serve as the library of information about animal shelters in one place. If anyone would like to donate money to these shelters instead of adopting, we also have information from the shelters themselves on the site," explained Nidchakan.

Anyone interested in adopting an animal can browse RightBaan to find a cat or a dog. If a visitor finds an animal he/she is interested in, they can contact a shelter via the social media information provided.

Over the past years, many news reports have shown how people adopt animals and then abused them to death. To avoid that, each shelter has established a procedure to prevent aspiring new owners from mistreating their adopted pets. Nidchakan explained that people who want to adopt an animal have to fill out a form and provide their personal data.

"There are questions in the form to evaluate the prospective owners' background. Some questions include what their house condition is like, whether the family members are willing to accept a new pet or not, and if they've ever taken care of any animal before. Afterwards, the aspiring pet owner must come to see the pet in person and officials at the shelter can question him or her more and determine if they love animals or not," said Nidchakan.

Phongsiri Nakphadungsuk, president of CU Vet Animal Welfare Club and fourth-year veterinary student at CU, added that after the pet owner takes a pet home, people at the shelter will follow up on the condition of the pet for a while.

"Some people have been turned down for adoption due to inappropriate environments. Cats and dogs at the club always stay in an enclosed area but some aspiring pet owners do not have secure gates to prevent them from running away or do not have enough space for them to play. As a result, we have had to deny adoption. In cases where a pet is adopted, we will check in with the owner on social media to see if there are any problems. The owner can also consult with our veterinarians. We will keep an eye on the pets for four to five months," said Phongsiri. CU Vet Animal Welfare Club at Chulalongkorn University is one of the shelters on RightBaan. Photo: facebook.com/CUVETforAnimalWelfareClub

In the UK and US, abandoned animals are euthanised after staying at an animal shelter for five to seven days. However, most Thai people prefer letting stray animals roam the streets rather than putting them down. As a veterinary student, Nidchakan also disagrees with euthanising animals. She said putting pets down is not solving the root cause of the problem.

"Stray animals are the consequence of irresponsible pet owners and dog farm owners who breed more dogs than the demand. We can solve the problem by adopting pets from shelters instead of buying them. This can reduce the number of stray animals. Local authorities should also have measures to deal with stray animals such as spaying or neutering them. Moreover, there should be a law related to pet issues. For instance, there should be a pet tax. This would mean that a pet owner must be financially stable enough to support his/her pet. Also, each pet should be chipped and registered to the owner's name. This can prevent problems about abandonment, lost and stolen pets," explained Nidchakan.

It will take a long time for Thailand to establish such rules and regulations. In the meantime, Nidchakan suggested that before getting a pet, an owner should look for information about the nature of the pet they would like to own.

"Most pets are abandoned because their owners do not have enough time, money and knowledge about their characteristics or behaviour. Many people desire cute and endearing pets but do not look up information about how to raise them. They do not know what food they prefer, what are their congenital and inherited defects and what are their needs. For example, many large dogs need physical activity. If they do not release their energy, they sometimes destroy things. When pets are sick, many owners cannot afford the medical expenses and some decide to abandon their pets. It does not matter what kind of pet you have but you must understand them and spend time and money on them. Animals are living creatures. They have feelings. If you are not ready for pets, don't get one," she suggested. 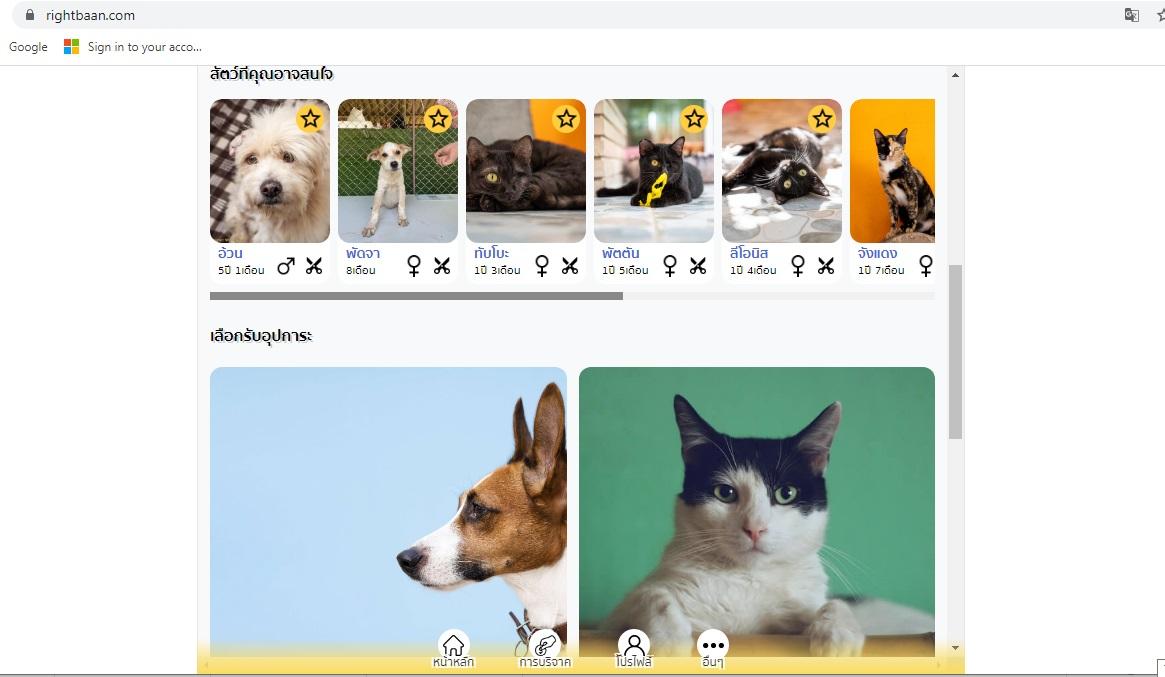 Cats and dogs are available for adoption on RightBaan. Photo: https://www.rightbaan.com/

In the future, the four creators of RightBaan plan to improve their features and add more shelters.

"During our first three weeks, we had 660,000 visitors and five pets were adopted. It was unexpected. We intend to add more features. If visitors cannot find a pet that they want, they can register on RightBaan and leave information about what they are looking for. When there is a match, RightBaan will send a notification to the visitor. We also have information in English. Currently, we have two shelters in Bangkok, one in Phuket and one in Chiang Mai. It would be nice to have shelters in other provinces, so it will be more convenient for aspiring owners to come to the shelters. We hope everyone will consider adopting stray animals to be their pets. If we can reduce the numbers of abandoned animals, it will reduce negative impacts such as animal attacks and rabies in the community," said Nidchakan.

*not her real name.