All about asparagus
Life
Social & Lifestyle

The first thing that comes to mind food-wise when you think of Montien Hotel Surawong Bangkok is probably its famous khao mun gai. While the iconic hotel has been showing off its new look since reopening in October, Montien's kitchen repertoire is also getting enhanced and becoming more sophisticated.

Along with its new look, Montien Hotel Surawong Bangkok brings back an old face, namely chef Hervé Frerard, as its Culinary Director. He's a veteran French chef in the Bangkok dining scene, having been at the helm of successful French restaurants in Bangkok between 2004 and 2015 before he took a hiatus from Thailand to work in leading restaurants in Singapore and Taiwan. To showcase Montien's more sophisticated food offerings, he will be joining forces with guest chefs in a special dinner series, with the previous one taking place last Friday in the revamped Ruenton restaurant.

"Diner Autour de l'Asperge", or Dinner Around Asparagus according to Google Translate, was a showcase of chef Frerard's flavours and finesse. The five-course dinner highlighted the prized French asparagus and each course was paired with selected wines. 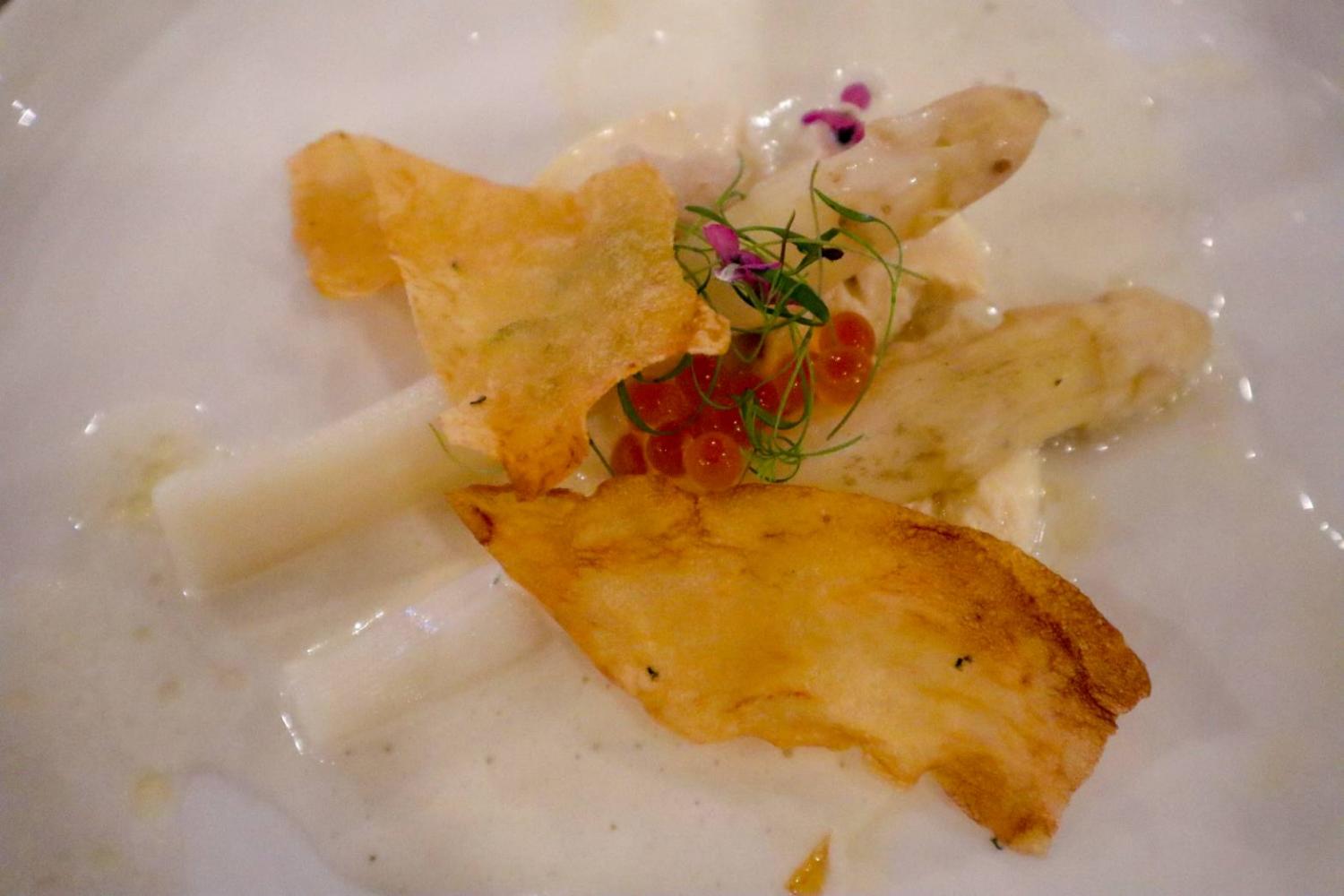 It started off with Green asparagus, sea urchin yuzu butter and bottarga. The green spears had this delicious melt-in-your-mouth feel without breaking apart when you picked it up with a fork. It had some umami and briny moments from uni and bottarga and I gladly soaked up the leftover sauce with some complimentary bread.

Next came the Classic white asparagus, gribiche sauce and mustard seeds, which was a Belgium-style dish. The sauce was a delicious combination of egg yolk, capers and more. Croutons were added atop for an extra crunch while the mustard seeds complemented the dish with some additional zest on the side.

The cremeux of white asparagus and smoked poached haddock fillet had many things about it to love; steamed white asparagus souffle, poached-in-haddock-milk white asparagus, smoked and succulent haddock fish as well as foam and tartare on the top of the souffle. Ikura and the thinnest crisp I've ever seen added even more flavour to the dish. 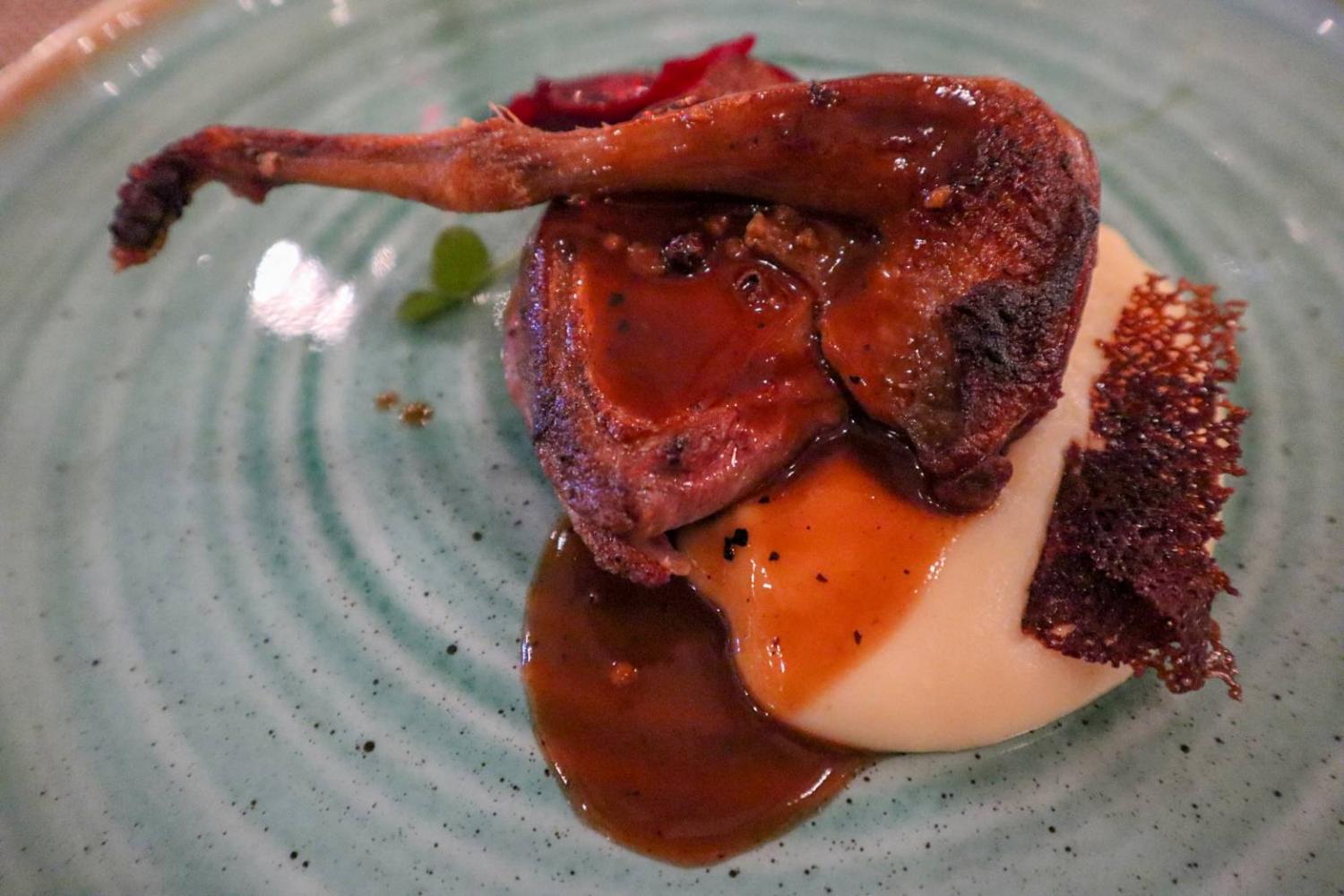 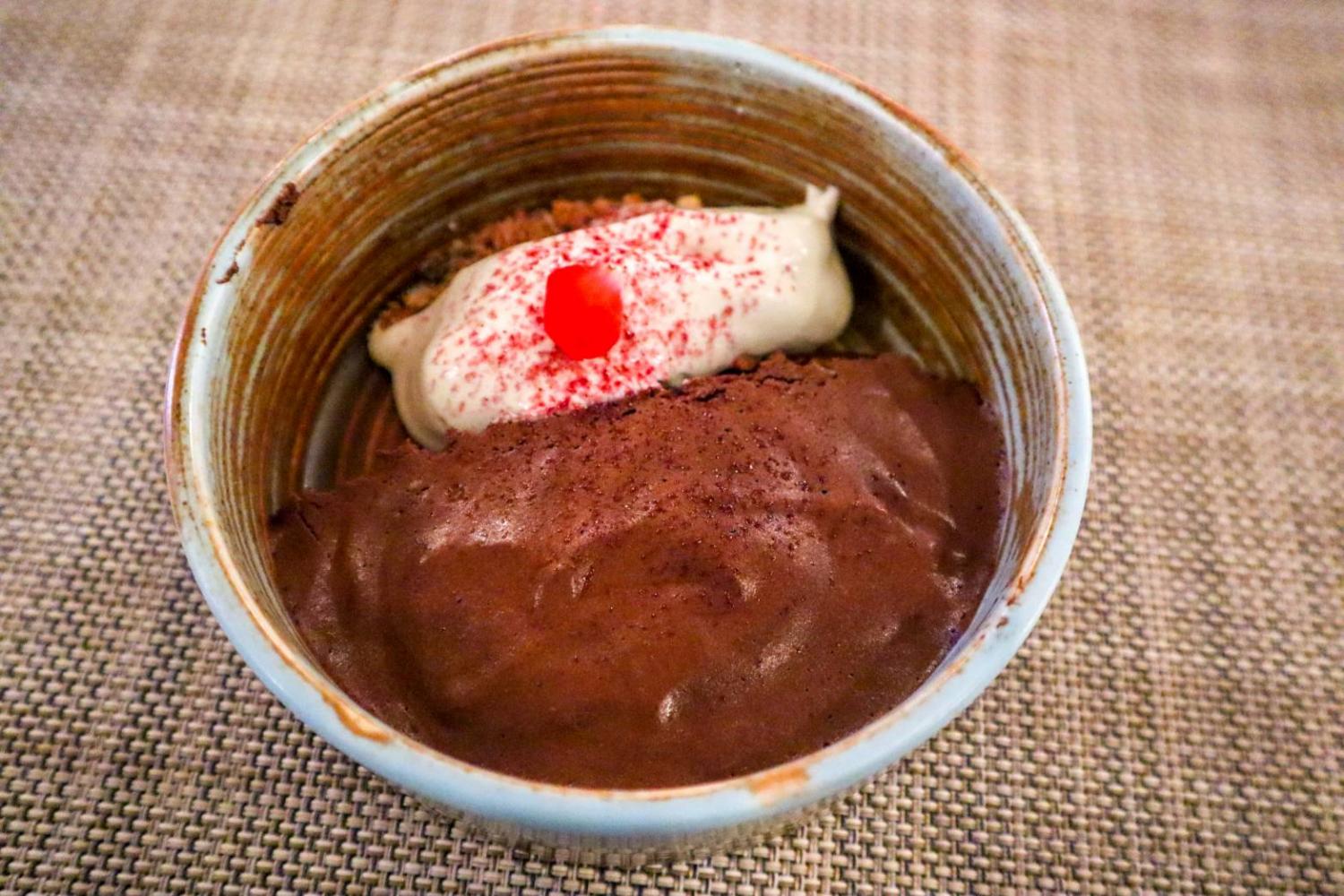 Then came the slow roast Racan pigeon which was served along with creamy Idaho potato espuma and jus. The pigeon itself had this pinkish glow and left a slight gaminess on the palate which I welcomed. The potato espuma was dreamily creamy while the jus was infused with cacao and Arabica beans for a chocolate-y touch.

Chantaburi chocolate mousse is paired with Sicilian sablé and pistachio cream for a sweet end to the meal. The yin side gave a rich and smooth texture while the yang side gave a lighter and fragrant contrast.

Judging from this chef's table experience, chef Frerard's creations are likely to take you on a journey as you discover new flavour combos and intricate textures along the way. As part of this ongoing series of special dinners at Montien Hotel, he will reunite with chef Jutamas "Som" Theantae of Karmakamet Conveyance for another four-hand dinner on May 7. They previously created a special four-hand dinner for Valentine's Day at Karmakamet Conveyance. French master and innovative fine-dining chef. Now that sounds like a palatable pairing. 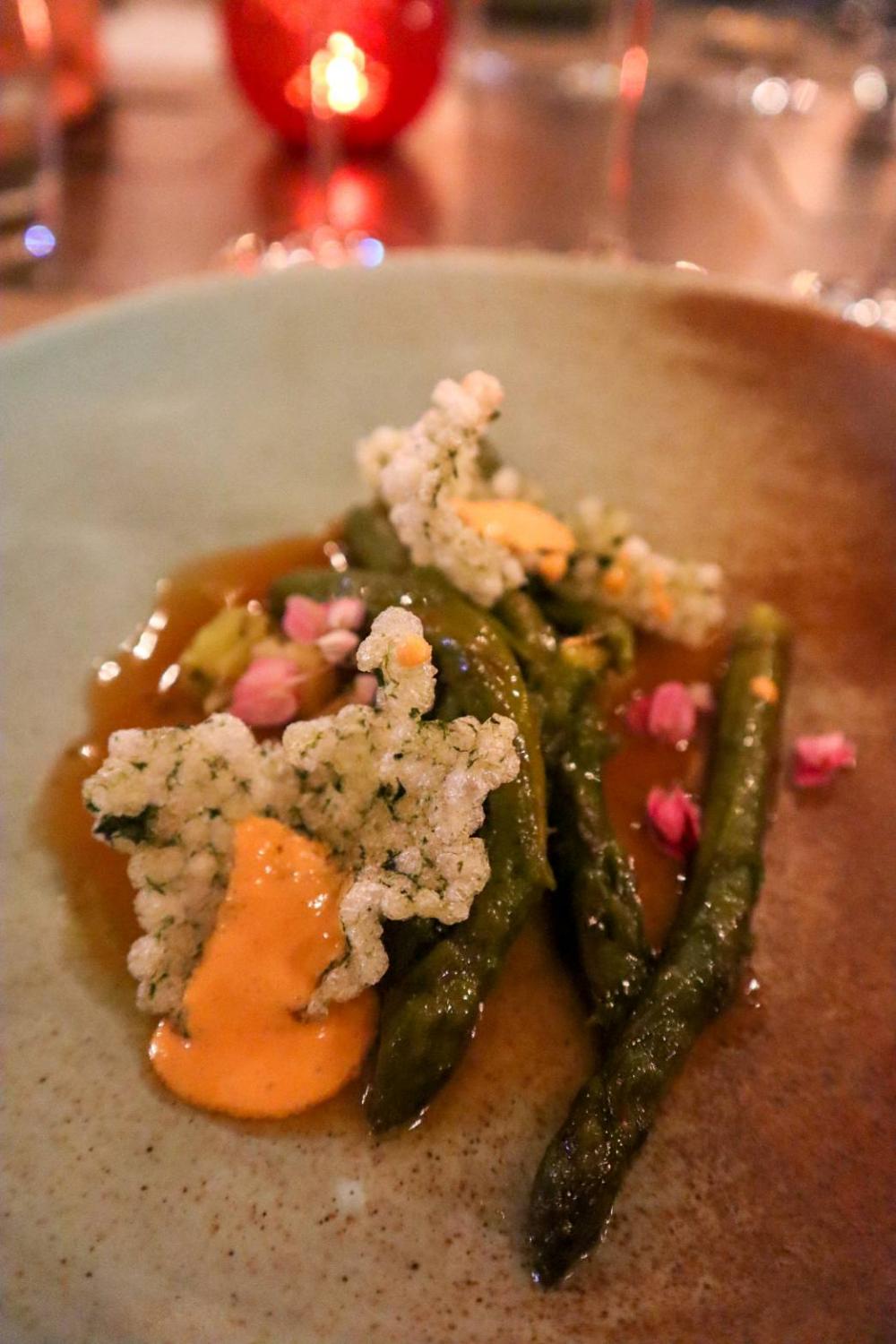 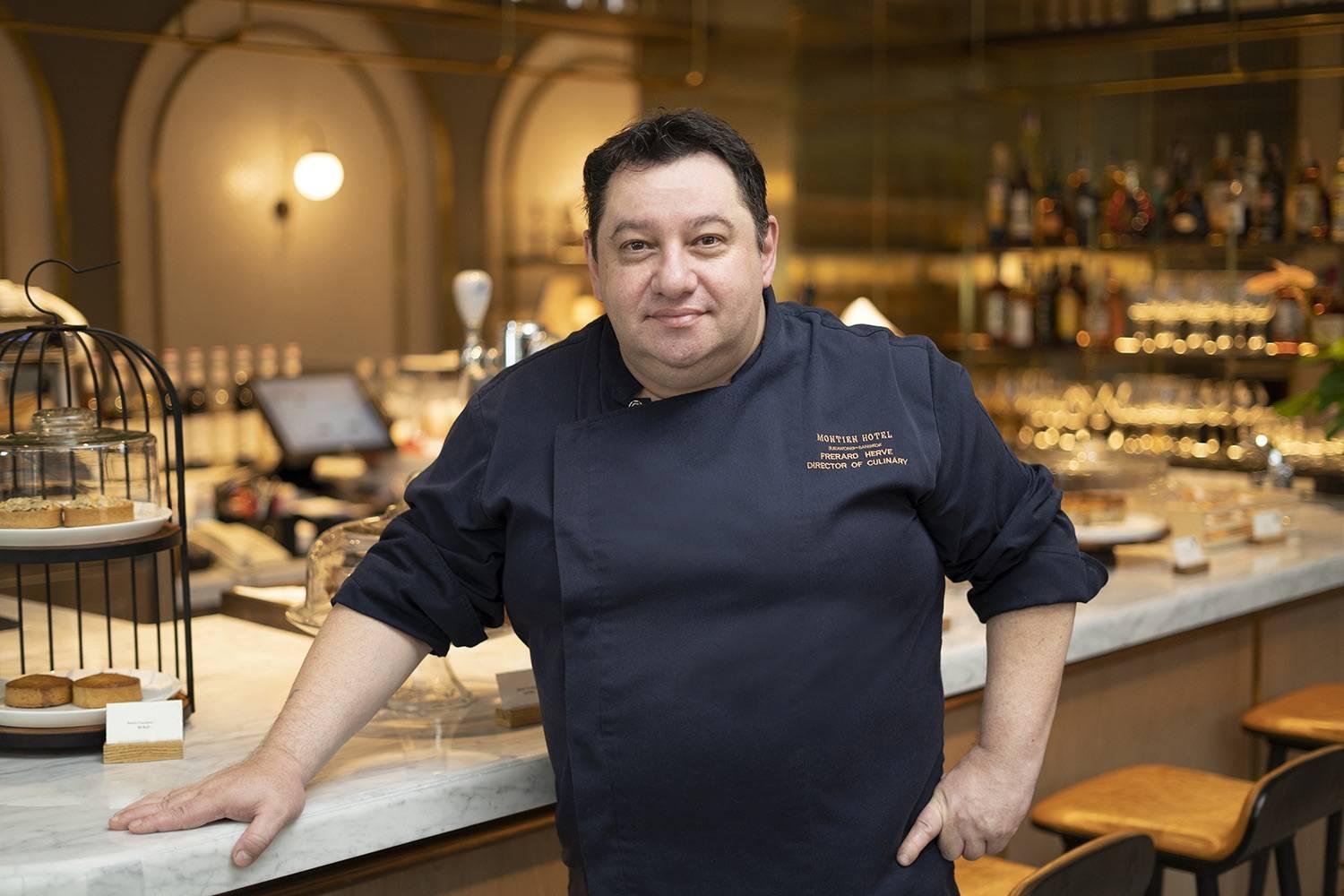