The art of Japanese gift giving

Cultural significance aside, the practice of offering presents provides a boon to any economy, exhibition organisers say

To celebrate Japanese cultural heritage and boost Thailand's gift industry, the Japan Foundation and Creative Economy Agency has introduced the touring exhibition "The Beauty Of Exchanging Gifts In Japan -- The Japanese Spirit Of Gifting: Giving Shape To One's Thoughts And Emotions".

On view until April 25 at TCDC Bangkok, this is the Japan Foundation's newest travelling exhibition, with Thailand as the first stop before moving to India. Curated by Nagasaki Iwao, director of Kyoritsu Women's University Museum, it showcases an astonishing 98 handicrafts, including kimonos with elaborate embroidery, refined bedding, engagement decorations, hand-painted silk crepes and children's pastel clothes -- mostly from the Edo period to the present day.

"Our mission is to promote and build understanding internationally. We've organised various cultural events like art exhibitions, film festivals and performing arts. And this time we bring this newest travelling exhibition to the world," said Shogase Mari, director of the Arts and Culture Department at the Japan Foundation. 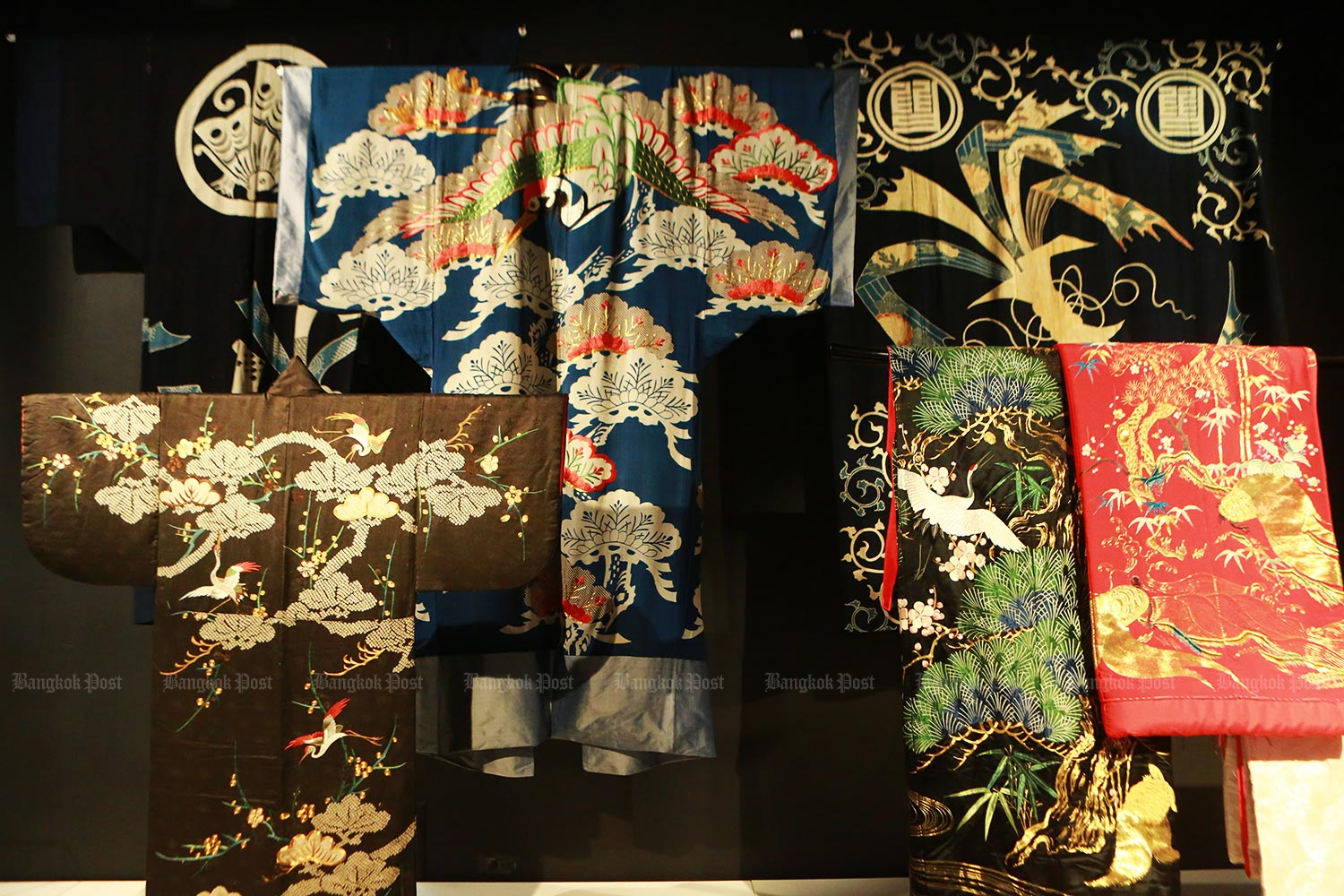 "This exhibition introduces the characteristics and how Japanese exchange gifts. We hope people enjoy the beauty of craftsmanship behind these items and understand the philosophy of Japanese people, how we are connected with nature and how we hope the connection or the bond of people to be."

Gift giving is a part of Japanese culture and there are several kinds of gifts bestowed on different occasions. For instance, okurimono represents seasonal gifts for a wedding ceremony and the celebration of a newborn baby, while omiyage refers to souvenirs you brought home from a holiday trip.

"Japan is a good study case about cultural management and gift economy. When culture becomes a part of daily life and business, it helps add value to handicrafts. We want to raise awareness of gift giving among Thais. Giving a gift can build the community of a gift economy. The global gift economy is valued at more than US$60 billion," said Songwad Sukmaungma, senior knowledge management officer of the Creative Economy Agency.

"Thailand has exported premium fruits to China during the Chinese New Year celebration, but the Covid-19 pandemic led to a decline in food exports. This time, we should look back to the local market and learn to stand on our own feet rather than counting on foreigners. We can create a choice of gifts based on traditions to add value to local products like Japan and China." 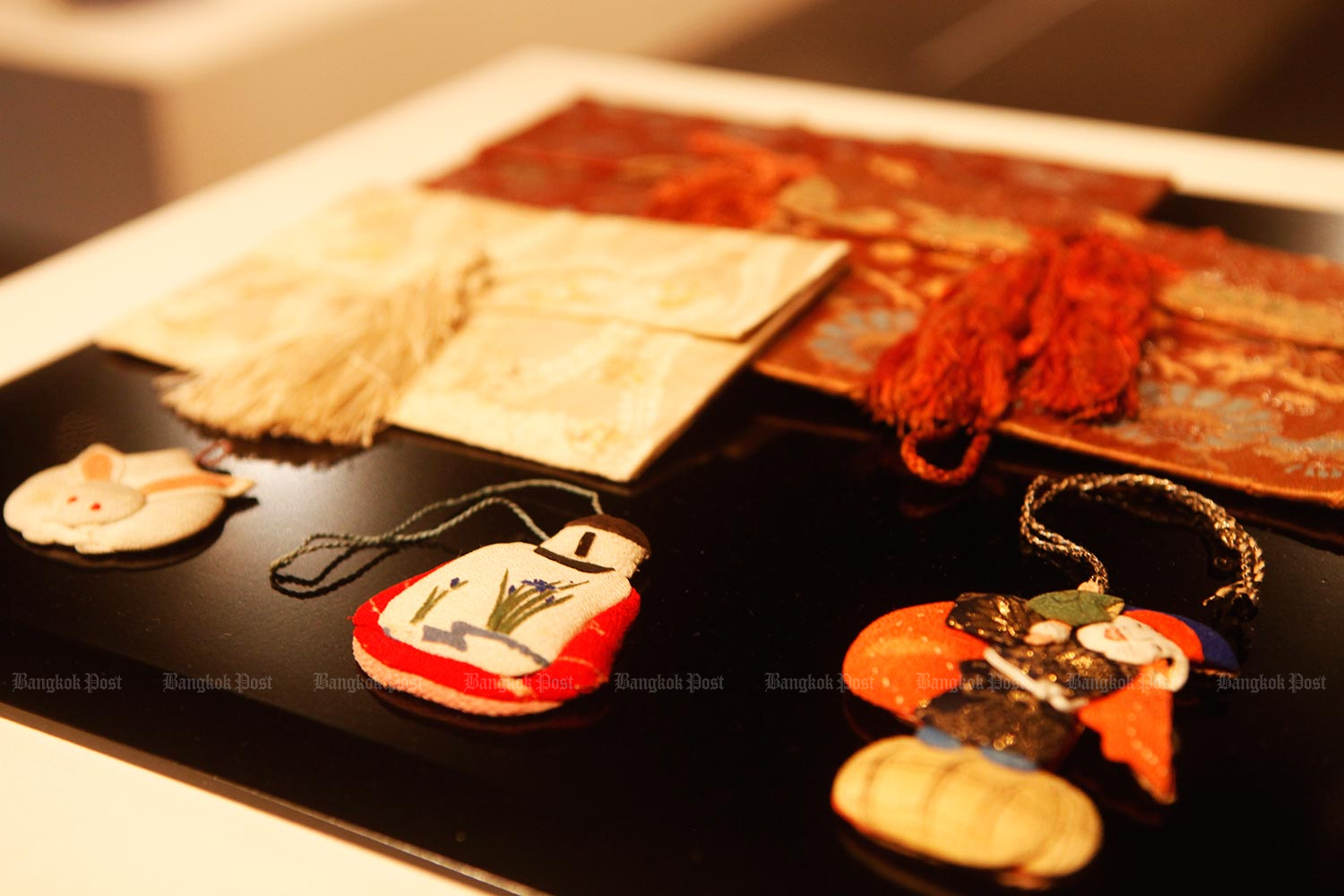 The exhibition comes in four chapters and starts with "Various Gifts Related to Weddings". In Japan, gift giving and exchanges are customary for the bride and groom to reflect the spirit of praying for a happy marriage.

During the Kamakura period (12th to 14th centuries), marriage changed form, in which women had to leave their birth home and move to their husband's homes, with yuino becoming an important ritual to establish a formal engagement.

On display is a set of symbolic traditional betrothal gifts featuring a miniature crane, turtle, plum, pine tree, bamboo and a grandpa and grandma couple to pray for happiness and longevity.

"During the Meiji period [1868 to 1912], Japan adopted modern culture, science and technology from the West as Thailand was developing infrastructure during the reign of King Chulalongkorn. Political systems and social circumstances changed, so wedding ceremonies shifted to simplicity," Songwad said. 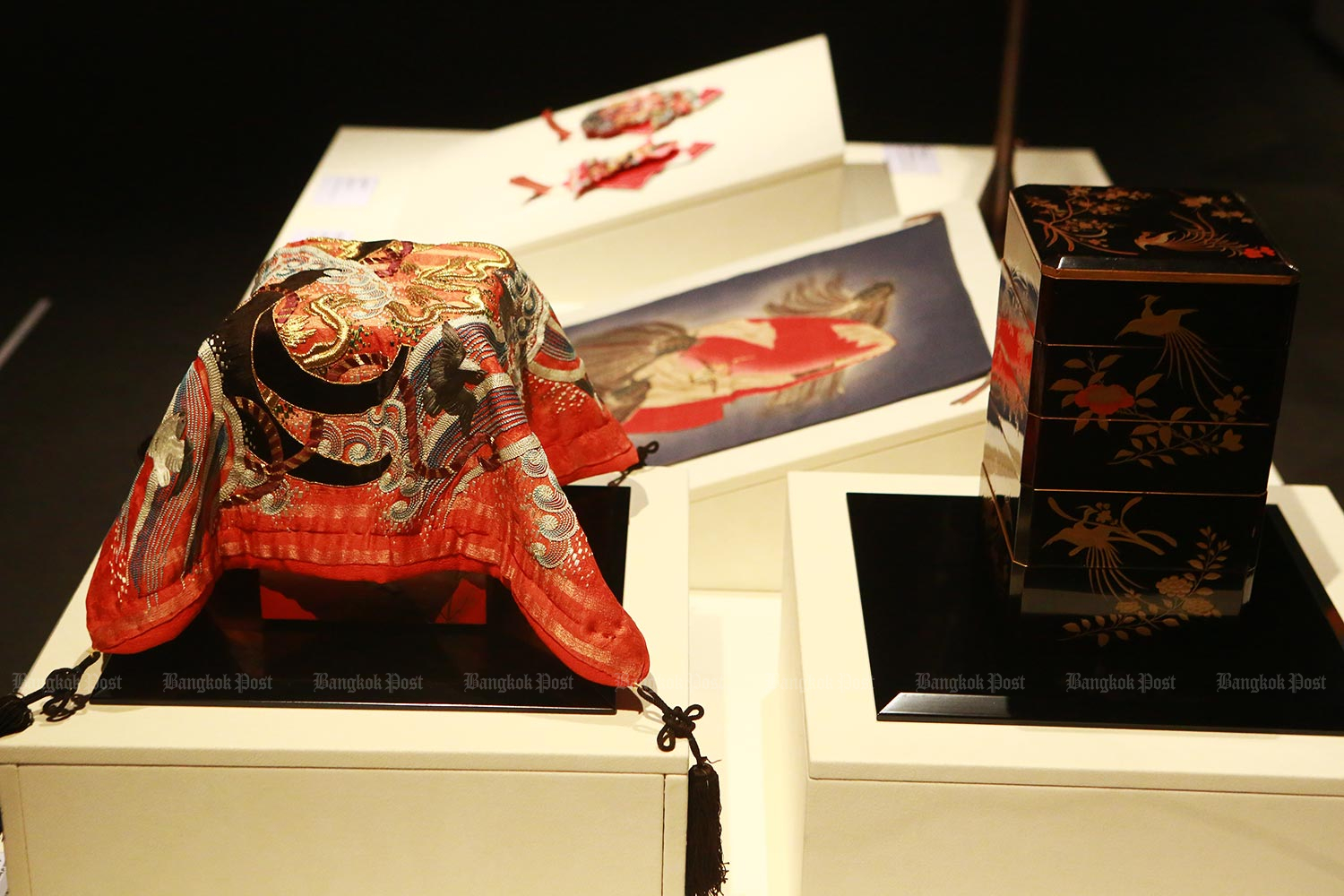 Fukusa with elaborate embroidery is used to cover things on ceremonial occasions.

Nearby is a collection of white wedding costumes that include a headdress, traditional sandals, silk uchikake (ornate bridal robe with long trail) and obi sash, which all were worn during the wedding ceremony. This was a gift set from the bride's parents to represent purity and begin a new chapter of life. There's also a series of bedding such as a futon (bedspread) and yogi (hand-painted, kimono-like blankets).

"A groom will give some money to the bride's parents to express gratitude because they need to prepare a new kimono and many other things for the wedding. A bride will wear a white kimono in the wedding ceremony and then change to a red or black costume. The designs and materials of the wedding costume, like sophisticated stitching techniques and quality silk, can identify social status," Shogase said. 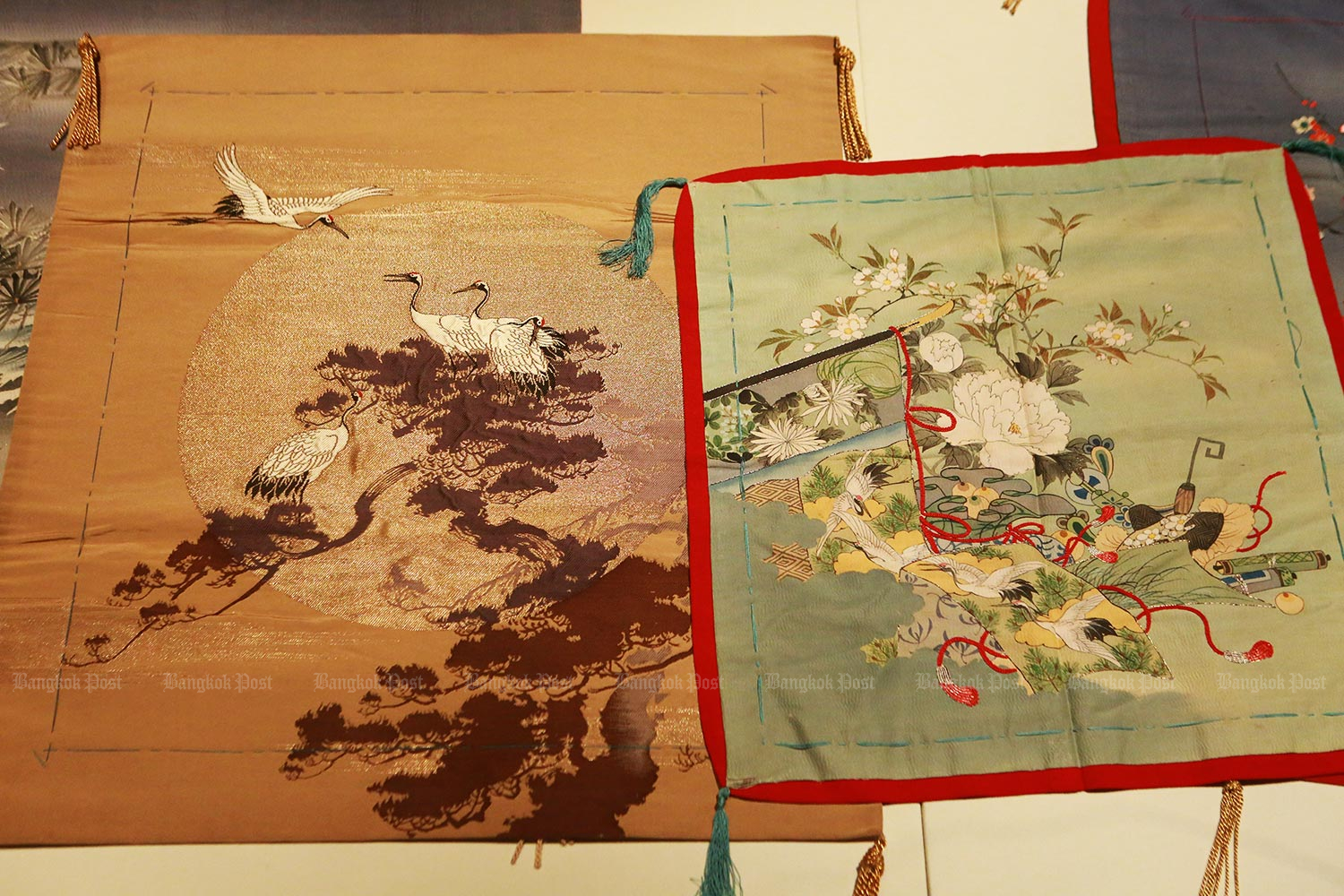 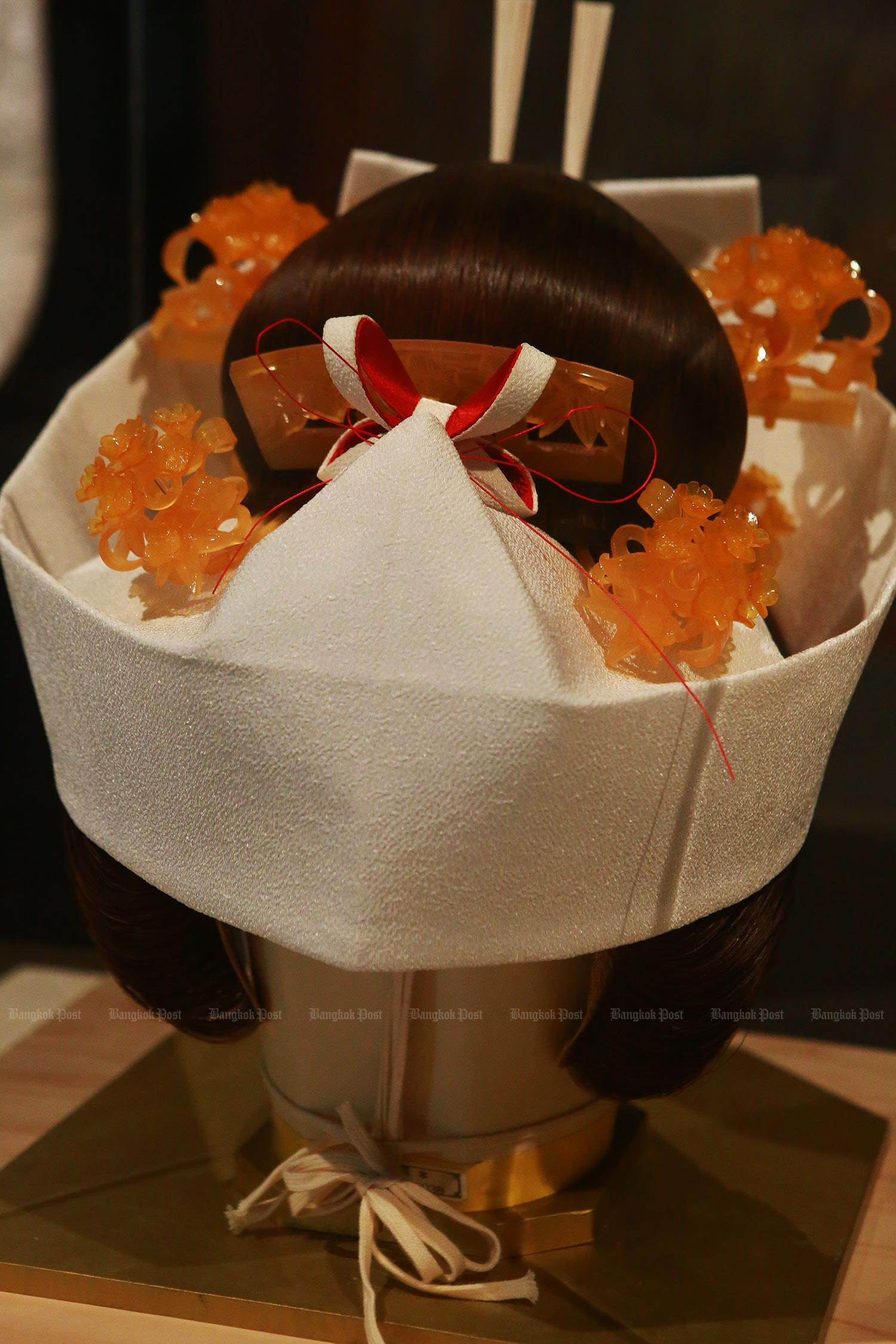 A white headdress for a bride. 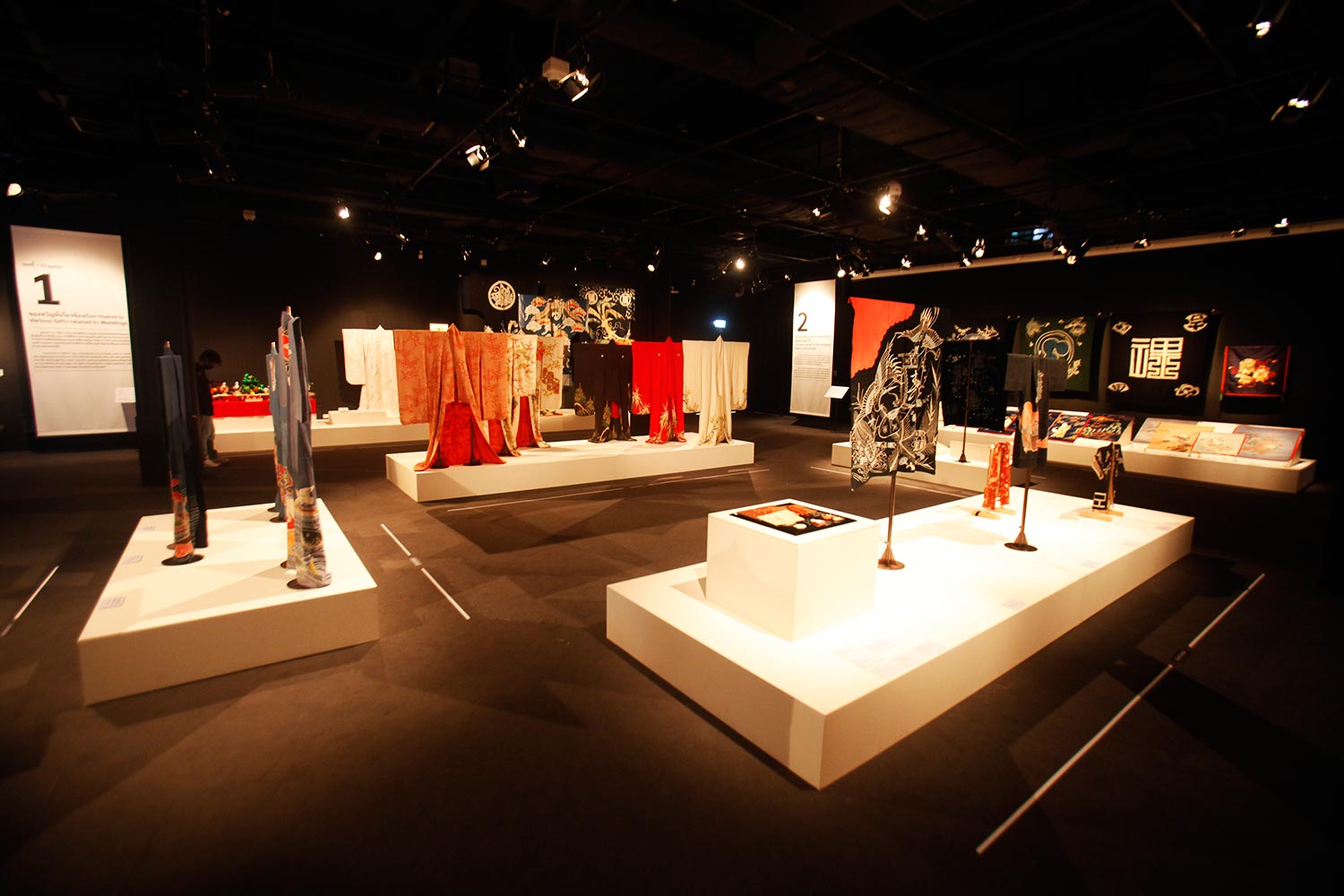 "Yogi is another gift from the bride's family. Influenced by samurai culture, the newlyweds will sleep inside a kimono-like quilted blanket with auspicious patterns to protect them from evil while they sleep."

The second chapter is "The Heart And Art Of Gift-wrapping". It boasts two styles of wrapping clothes -- fukusa with elaborate embroidery is used to cover items during ceremonies, and furoshiki, a simple hand-painted wrap for daily life.

"Wrapping represents the importance of the gift and it's a part of giving. We use furoshiki when we give gifts on very ceremonial and important occasions. This chapter shows that we don't use just any cloth for wrapping, the patterns have their meaning," Shogase said.

"In the old days, Japan was influenced by Chinese culture and used mythical creatures like the phoenix and dragon as auspicious symbols. Later, we customised kissho patterns from some local animals and plants in daily life to reflect characteristics of Japanese culture. A crane, turtle and pine tree symbolise good luck and longevity, while bamboo represents purity and innocence, and a snapper brings you happiness. Plum is about spring and rice straw refers to the harvest festival."

The third chapter is devoted to "Gifts From Parents To Children". During the Edo period (1608 to 1868), when healthcare was still very rudimentary, parents tailored hitotsumi (kimono for infants up to three years), yotsumi (kimono for children ages three to 12), caps, bibs, amulet cases and identification tags for their children. They featured kissho patterns to protect their children from disasters and evil spirits.

But the highlight is ancient armour for children from the late 17th century to early 18th century. In the past, the birth of a boy with the right to inherit the family headship was generally regarded as essential for the survival of the household, so parents prepared some gifts to symbolise his future profession.

Also on display is a collection of maiwai (celebratory clothes), which owners of fishing nets and vessels gave workers as an award after a large catch as well as yukata, which kabuki actors and sumo wrestlers bestowed on their fans to express gratitude for support.

As part of the tour, the exhibition will travel to TCDC Khon Kaen from May 5 to June 30.

"The Beauty Of Exchanging Gifts In Japan -- The Japanese Spirit Of Gifting: Giving Shape To One's Thoughts And Emotions" is on view at the Gallery of TCDC Bangkok until April 25. Open daily from 10.30am to 7pm (except Monday). Admission is free. Find out more details, call 02-105-7400 or visit cea.or.th, jfbkk.or.th.