To prevent bullying of LGBTI youth, the ThaiTGA has created a manual titled This House Has Gender Diversity to help educate parents and dispel their fears

Mark* is the oldest son in a Chinese-Thai family, so his parents have high expectations. After being forced to study what he disliked, Mark consulted a lawyer to file a lawsuit against his parents because he felt he had been mistreated due to his gender.

Mark is one of many LGBTI youngsters who suffer because their parents cannot accept their sexual identity. Even though Mark could not file the lawsuit since he was underage and needed permission from his parents to proceed, the case triggered Asst Prof Ronnapoom Samakkeekarom, chairman at The Foundation of Thai Transgender Alliance for Human Rights (ThaiTGA) to come up with a solution to make parents understand their LGBTI children. In collaboration with the Thai Health Promotion Foundation (Thai Health) and other alliances such as NGOs and hospitals, the ThaiTGA released a manual for parents of LGBTI children titled This House Has Gender Diversity.

In 2014, research by Plan International, Mahidol University and Unesco reported that six in 10 LGBTI high school students in Thailand were bullied due to their gender identity. Moreover, 31% of these students had experienced a physical attack; 36% suffered social abuse; 29% verbal abuse; and 26% sexual abuse. Meanwhile, at least 7% of LGBTI students who experienced abuse attempted suicide.

"In a study, 48 out of 100 LGBTI students experienced bullying and more than half of them were bullied by their own family members. It was a shock to discover that LGBTI youth were suffering more from abuse by parents rather than other people. Hence, we had a discussion with Thai Health to find ways parents could look up information that would empower them to handle problems they have with their LGBTI children," said Asst Prof Ronnapoom. The 84-page This House Has Gender Diversity manual for parents who have LGBTI children contains eight chapters with content divided into four main parts. The manual is easy to read and summarises the latest information. To create this manual, a group of parents of LGBTI children from 60 families in Chiang Mai, Bangkok, Pattaya and Chon Buri met to discuss and share their experiences. Information from their discussions was studied by experts and scholars.

Ronnapoom said that at the beginning it was difficult because no parent wanted to open up about their experiences.

"Parents were interested in listening to others but no one wanted to share their own personal experience. So, we had to invite a professional who could create a safe atmosphere for parents. It took time but it was important to have a safe space for the parents to question and express how they feel about their children both negatively and positively before working on a solution," said Ronnapoom.

The first section of the manual introduces readers to the concept of gender and sexual diversity. It also informs parents that there is no identifiable reason for the sexual identity of being lesbian, gay, bisexual, transgender, queer and nonbinary. These are also genders, just as male and female are genders.

Dr Bentawich Surasartpisal, a family physician at Gen V Clinic, Ramathibodi Hospital, who contributed to the two-year process of creating the manual, emphasised that other genders besides male and female are not psychological disorders. 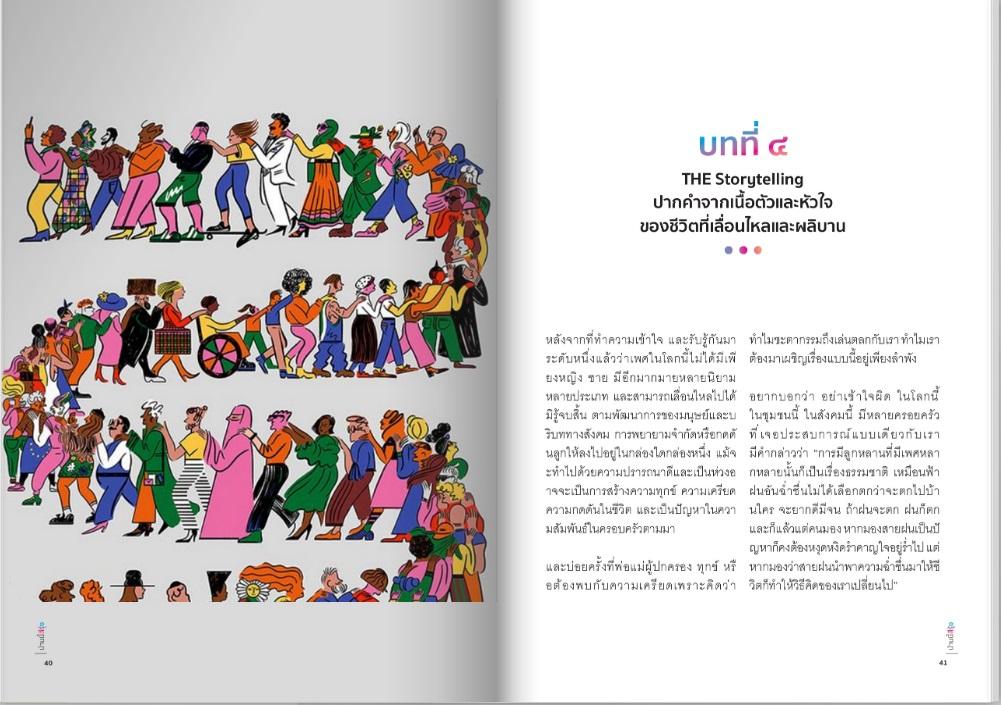 This House Has Gender Diversity. Photo: The Foundation of Thai Transgender Alliance for Human Rights

"Gender and sexual diversity are not disorders nor are they abnormal, so you don't have to find a reason for them being this gender. If you question what causes them to be gay or lesbian, you must search for the causes of being woman and man as well," said Bentawich.

The second part tells a story that relates to the experiences of many families who have LGBTI children from provinces such as Chiang Mai, Pattaya and Bangkok, so that readers can feel they are not alone. Instead, it creates a feeling amongst parents that they have companions who have been through similar experiences even if each family handles the situation differently.

The third part of the manual covers parents' expectation. Most parents who bully their children do it unintentionally because they are worried about how society will react. Some common expectations include ordaining them as a monk, pressuring them to get a job and marry and have children. This section provides information to relieve parents' concerns.

"There are temples that accept LGBTI people to become monks. This section also provides examples of LGBTI people who have successful careers. Some parents worry that their LGBTI children cannot have their own children and will have to live alone when they are old, so the manual also includes information about assisted reproductive technology, child adoption, as well as elderly welfare," explained Ronnapoom.

After reading the manual, some parents still cannot accept their children's sexual identities. To help them deal with these difficulties, the manual provides the contact information of experts nationwide.

"The contact list includes professionals in NGOs, hospitals and organisations under the Ministry of Social Development and Human Security. They can meet a professional in person. Experts in NGOs are in several provinces, so parents do not have to travel to Bangkok," said Ronnapoom. As a member of the LGBTI community, Matcha Phornin who works at the Sangsan Anakot Yawachon organisation and is a board member of International Family Equality Day, also contributed to the manual. Matcha is one of the parents who embraced her adopted daughter, Siriwan Phornin, when she came out as bisexual. However, Siriwan's classmates and a few teachers in her school have made fun of and bullied her and her LGBTI friends. After Matcha had a meeting with the parents of the bullies, the parents realised what their children did was wrong. Moreover, the teachers also then began to understand the victims better.

"Teachers can also use the manual, especially those who do not know how to deal with LGBTI students. The manual can answer questions that teachers and parents have. When parents search on the internet and come across this manual, they will find useful information that they can use. As a result, they will then act in a way that does not violate their children's rights such as seeing a doctor who claims LGBTI can be cured," said Matcha.

The complete manual will be available for download starting tomorrow at online.anyflip.com/slmrr/cjaj/mobile/index.html. The ThaiTGA also plans to test the manual with parents in other regions such as the Northeast, Central Region and South to collect more feedback from parents.

"The manual has already triggered action in many educational institutions. The Prince of Songkla University has decided to open a clinic for LGBTI and they will be followed by Srinakharinwirot University, Khon Kaen University and Chiang Mai University. We really hope the services for LGBTI, both mentally and physically, will also be included in the universal healthcare coverage scheme, but this is a massive plan. We have to create a social environment and have proper institutions before we can achieve that," said Ronnapoom. Before the ThaiTGA can achieve this goal, Bentawich advised that parents should listen more to their children.

"We do not expect every parent to follow what the manual suggests. Instead, reading the manual is just a way to get parents to open up to listen to their children. Nowadays, we have many channels to communicate with one another but we prefer talking to listening. Your children want you to listen to them. You do not have to believe in them but you should open your mind and listen to what makes them suffer, so you can know what can be done," concluded Bentawich.

*Not his real name