At the exhibition 'New Ramayana', artist Surachet Prueksawunprasut gives the supporting characters of the Ramakien epic a new futuristic look

Thotsakan, the Demon King of Lanka in the Thai epic Ramakien, plays with a drone. Hanuman, the Monkey King, kills a giant with a gun and the giant Queen Nang Sammanakkha wears colourful attire without the golden theatrical crown. These characters from the Ramakien were created in new forms for a future world by artist Surachet Prueksawunprasut in the collection titled "New Ramayana", who makes them look different from their usual self in the traditional paintings.

After his daughter was born, Surachet began to think about the future and his thoughts are reflected in his work. His previous collection is about a future world where there are many droids, robots and futuristic architecture. He then visualises what will happen in the next 50 or 100 years in the world of the Ramakien.

"I chose to work on the story of the Ramakien because this literature has been in Thai history and culture for a long time. The Thai Ramakien is very different from the original Indian Ramayana. In Ramayana, Hanuman is celibate but the Thai Hanuman sleeps around. Meanwhile, Thotsakan in Ramayana does not have an ugly demon appearance but is a good-looking giant. I want to present Thai art in a different form. It is like local art in the countryside which differs from art in the capital even though they share similar beliefs. When mentioning Thai art, people think of the traditional kanok pattern. However, Thai art does not have to be like that," explained Surachet.

Kit Chirachaisakul, the curator at Kalwit Gallery said "New Ramayana" stands out with its contemporary art style on a white background.

"Many painters draw characters from Thai literature in traditional style but Surachet does not stick to the typical format. His new characters are intriguing and his black lines are not stiff. They include some curves that create volume. Some of his Thai characters include some elements of Japanese cartoon characters also and this may appeal to viewers," said the curator.

To create new forms for characters, Surachet brought elements of lines and patterns from art styles of other countries such as China, Japan and Cambodia to blend with his work. 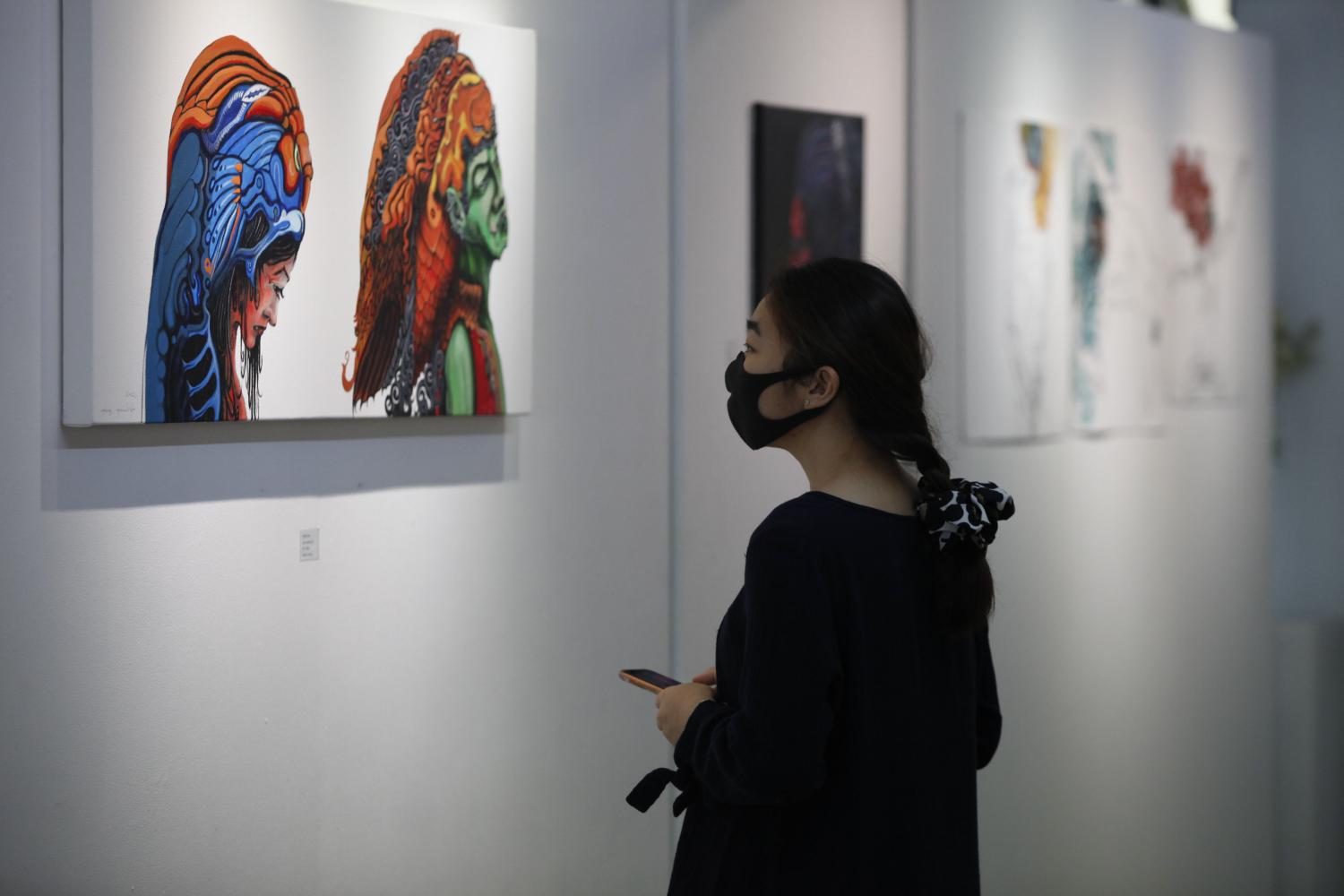 "Chinese traditional portraits of leaders or nobles have a white background to clearly show the leaders so as to not distract viewers with other elements. Hence, I used a white background in many pieces. The coil and roll patterns are from India. Two paintings, Queen and Giant Woman, with black backgrounds are influenced by Cambodian art but the face of the female character in Queen was inspired by an Indian face painting," said Surachet.

Instead of focusing on the main characters in the Ramakien, Surachet intended to depict supporting characters, especially the giants. The paintings such as Kill Giant and Giant Dead portray unfortunate events for giants who are powerful and vicious demons in Thai literature.

"I would like viewers to pay more attention to the blades of grass rather than a big tree. I want people to focus on the format rather than famous characters. I drew supporting characters such as giants so viewers can use their imagination to visualise how the leader of the giants in the future might look like. In the Ramakien, many giants are abused and I feel sorry for them. Hence, I created Kill Giant which depicts the image of Hanuman as a cruel creature since he shoots a giant in the head," said Surachet.

The 38-year-old artist graduated from the Faculty of Fine Arts, Chiang Mai University. As a Bangkokian, Surachet had to return home after graduating and has since been a full-time artist in the capital. He found that without any connection with his lecturers and friends in Chiang Mai, it has been difficult to exhibit his work. However, Surachet developed his style by experimenting with several materials such as watercolour, oil paint, black and white drawing and acrylic. 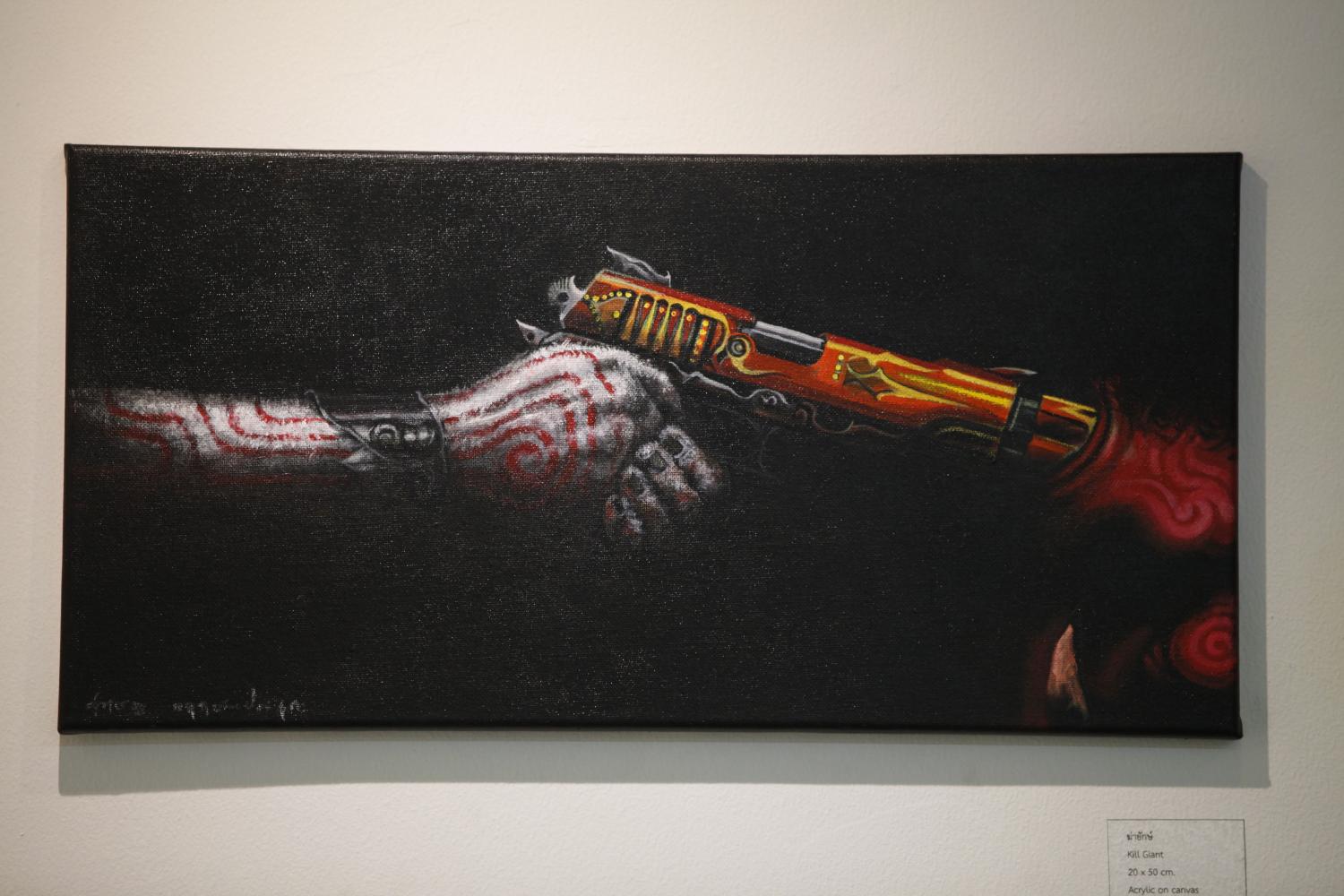 Hanuman uses a gun to shoot a giant in Kill Giant.

"New Ramayana" is his first solo exhibition and he decided to use acrylic because the colours dry quickly.

The current exhibition also depicts a dystopian world. When asked why he wanted to create a dystopia and not a utopia, he said a future dystopia is more likely.

"Since I have a daughter, I am worried about the future of our society. Distorted events happen daily and nothing is certain. We do not know the future and we have no idea when or if the coronavirus pandemic will end or when Thai people will achieve herd immunity. These factors led me to feel that a dystopia is very possible in the near future," said Surachet.

Working as a full-time artist is not easy for Surachet, but he said that he will never give up on this career.

"I always have hope. Even though it is not easy to showcase my work, there is a space for me. I am somewhat satisfied with the results of my work. I will never give up working on art because it gives me my worth as a human. I will leave my creations for the next generation to think about," concluded Surachet.