Choreographer Jitti Chompee's ongoing khon project, which includes Melancholy Of Demon, a dance performance that I reviewed earlier this month, is supported by the Ministry of Culture and departments and offices under its umbrella. This is a surprising level of governmental support granted to a contemporary dance artist who wants to do not-so-genteel things with khon and the character of Tossakan. I still remember how in 2006 the Ministry of Culture reportedly forced Somtow Sucharitkul to change the scene in his opera Ayodhya that depicted the death of Tossakan (Ravan in the opera version) onstage, a practice that is considered a bad omen in Thailand.

The project has done a good job so far of educating the public about khon by bringing together critics, artists and academics to share their knowledge and interpretation of the genre and of Jitti's work in accessible ways through a book, film, demonstration and panel discussions.

It's understandable that all the media and literature the project has so far produced is focused on Jitti's exploration of khon. But in a way, this project is another attempt to write a history of khon, or at least to record its development in a systematic way. From watching via Facebook Live the demonstration and panel discussions on March 27 at the Neilson Hays Library, I thought the narrative of the more recent history of khon contained a gaping hole. It was most likely not the intention of the speakers or presenters that day, but Jitti's undertaking seemed to have been treated as the first major effort to deconstruct and develop khon in the past few decades when this is not at all the case.

There were comparisons between Jitti's work and the more traditional versions of khon, but no comparisons at all of his work and process to those of contemporary artists like Pichet Klunchun, whose relationship with the art form preceded Jitti's by decades.

While Pichet and Jitti both approach khon as dancers and choreographers, with wildly different results, there are other artists in Thailand whose contribution to khon should not be overlooked. The works that resulted from Patravadi Mejudhon and her decades of collaborations with folk and classical performing artists, for example, should not only be credited for their experimentation with the visual aspects of these art forms. She should also be credited for her interpretations of classical Thai literature through theatre. I was actually happy to see that the event at the Neilson Hays Library took time to touch on the literary/storytelling aspect of khon -- something that is often left out in performing arts conversations in Thailand.

There are surely other contemporary artists who have contributed to the development of khon, not to mention classical and folk artists, like artists and companies that continue to perform khon sod, a folk form that combines khon with two traditional folk forms: likay (a regional comedic musical theatre) and nang talung (Southern Thai shadow puppet plays).

This brings me to the questions of how we define and apply labels such as "contemporary", "traditional", "modernisation" and "preservation" in regards to khon. What does khon have to look like today and what do artists have to do with it for it to be considered "contemporary"? Can we truly call some of the khon that is being performed today "traditional"? What does it mean to modernise or bring into the present a performing arts form? Isn't modernisation one of the methods of preservation? Can any art form be preserved without modernisation?

Jitti's project is not yet complete. Melancholy Of Demon will be re-staged later this year. Another book is under way, and perhaps the documentary will be expanded. But I hope the final product will provide or at least take into consideration a more complete picture of the evolution of khon and its interaction with other cultures and art forms across centuries. 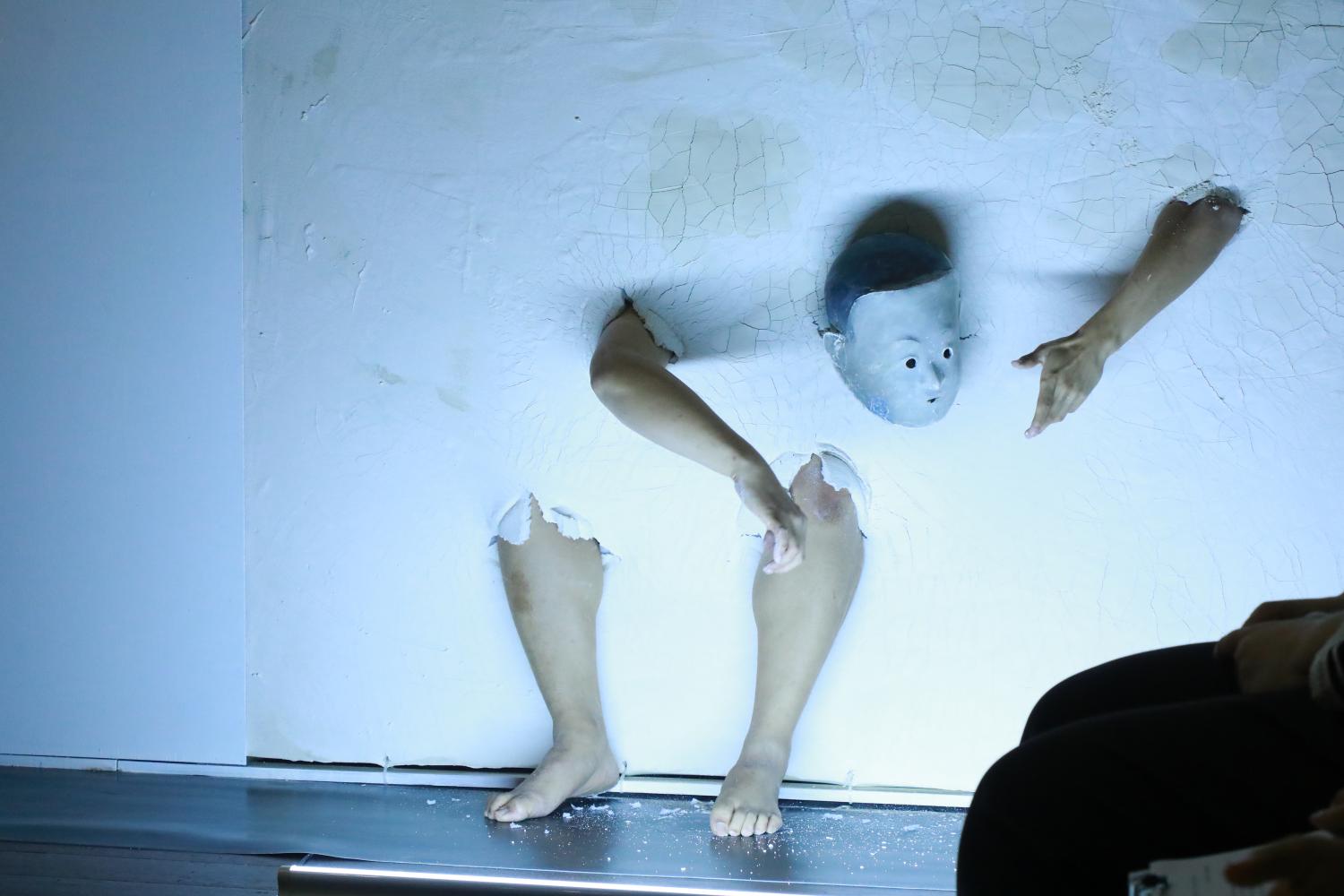 Pattarasuda Anuman Rajadhon breaking down Jitti Chompee's 'Melancholy of Demon' during a demonstration at Neilson Hays Library on March 27. (Photos: MINISTRY OF CULTURE)

The Question of Relevance

The question of making khon more relevant to younger generations seems to be asked most often by artists, as if the task falls on them alone and the answer lies only in their artistic processes and their fruits.

The number of young khon artists who continue to dance in khon productions and who have sought out opportunities to train and perform with artists like Jitti and Pichet is proof that the new generation of artists continues to see khon as relevant to them and has the desire to innovate and build upon their artistic roots. Khon is clearly still relevant to the young people who choose to pursue degrees in classical dance and music. Some just choose to remain closer to tradition, while others prefer to branch out.

When it comes to relevance to audiences, I believe it's a mistake to think that khon has become irrelevant to current society. Khon is a relatively straightforward art form. Yes, familiarity with the stories in the Ramakien, the literary language, and the idiom of Thai classical dance can increase the appreciation of the art form. And perhaps fewer and fewer people grew up with these stories and rituals of attending khon performances.

But consider the following: Khon at Sala Chalermkrung Royal Theatre is 25 minutes long. The annual Queen Sirikit's khon performances have drawn a wide range of audiences for over a decade. Khon may not be popular among certain sections of urban art consumers and theatregoers, but we also shouldn't forget that older generations of audiences who grew up loving khon and other traditional forms of live entertainment still walk among us. And it would be a shame to let them die off without learning anything from them.

So the problem with the questions of relevance and audience development today is that they mostly concern young urban adults and are directed at too few disciplines and professions. To cultivate an interest in art and a theatregoing culture, you have to start much younger.

Although artists should have the freedom to experiment with any art forms they want in whichever way they want, as can be seen with Pichet and Jitti, the results can be alienating and inaccessible. Listening to passionate academics sharing their knowledge of khon, music, Tossakan and the Ramayana epic at the Neilson Hays Library, I realised that the effort to make khon more relevant needs to be multidisciplinary like this panel and the project. But it needs to go further by involving people in more fields, not just academics and critics. So why not explore what creative educators, curators of museums, especially children's and science museums, and experts in early childhood development and learning have to offer?

How can we make an art form, viewed from a distance, more tactile and interactive for young and potential audiences? Do the performing arts, not only khon, deserve a place in museums and other learning spaces as exhibitions and activities to develop interest and instil a sense of wonder in children? Curiosity in science doesn't always start in school science labs. In fact, nature and science museums can be a lot more fun. So can science toys for children. Who says then that curiosity in the performing arts has to start only in the theatre and after-school classes? We shouldn't forget that for arts education to be successful, it doesn't have to result in only more artists, it can and should result in more informed audiences, too.

If we want to take the issue of audience development more seriously, perhaps we need to imagine spaces in which the performing arts can exist beyond designated performance areas, classrooms and workshops and develop ways in which the public can interact with them beyond the duration of a performance and post-show talks.