When in Surat Thani, skip the more famous destinations and head over to Koh Nok Phao and Koh Raet for a taste of local life and unique homestay experiences

published : 22 Apr 2021 at 04:00
newspaper section: Life
writer: Karnjana Karnjanatawe
Hat Longhon is the name of this spot on Koh Nok Phao. The term means invisible beach because it will disappear every monsoon season and reappear during the end of the year until April.

Koh Nok Phao was not a familiar destination to me when talking about exploring the islands in the southern province of Surat Thani. Known as Muang Roi Koh (meaning Hundred Island Province), Surat Thani has many islands and islets that have not yet become well-known unlike Koh Samui, Koh Phangan and Koh Tao.

As I looked at the map from Don Sak district where I was to board a ferry to Koh Phaluai, I spotted a small island with a homestay. Out of curiosity, I decided to spend a night on Koh Nok Phao and also explored the tiny island of Koh Raet, located near Don Sak mainland, during my recent trip to Surat Thani.

Located about 5km from the mainland, Koh Nok Phao can be visited year-round. It is home to about 50 families and most of them are fishermen.

Since this trip was part of my island journey, I did not ride a boat from the mainland to the island. Instead, I took a ferry from Koh Phaluai to Koh Nok Phao. The journey took me about one hour and when the ferry was near the island, a boatman told me to get ready to transfer to another boat. 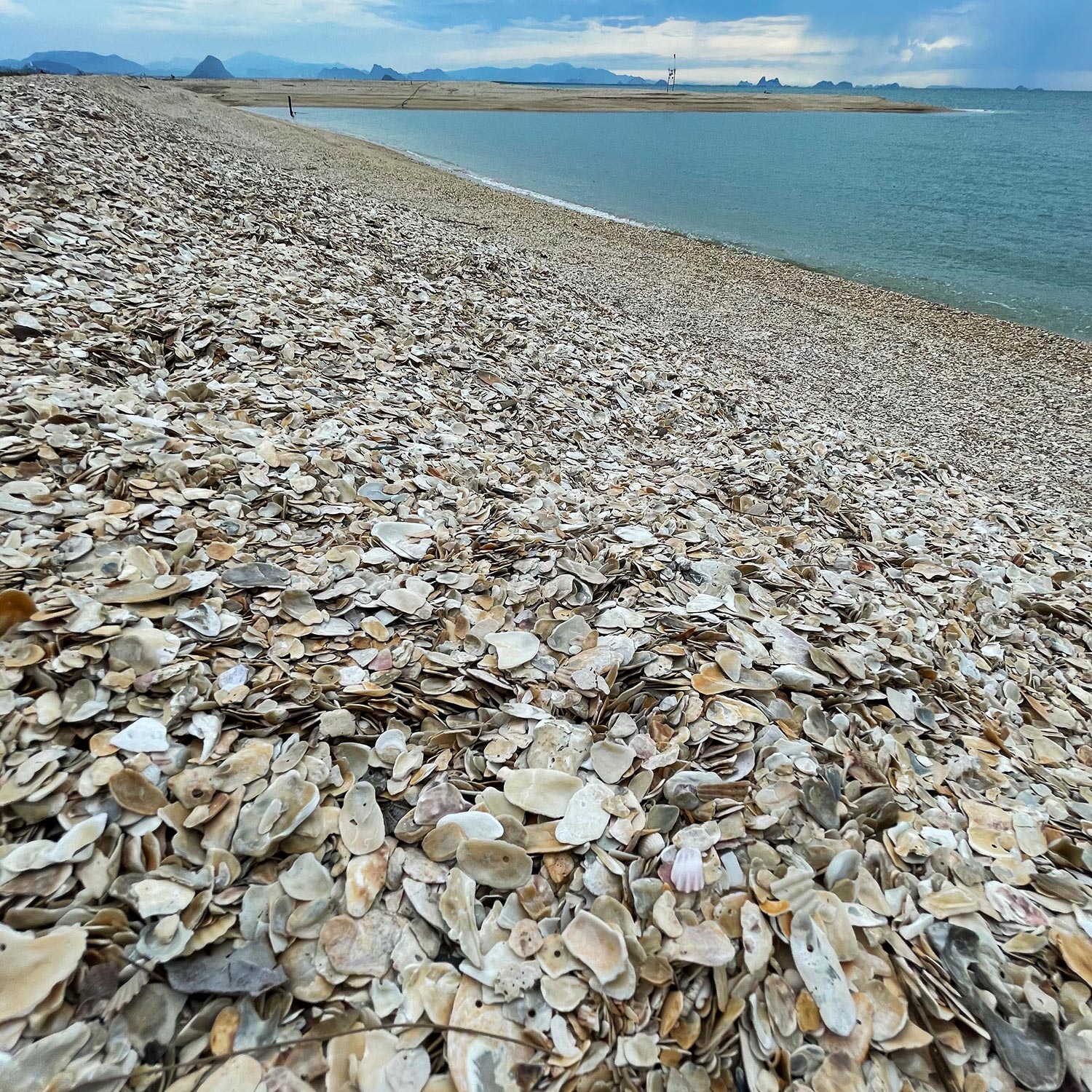 The beach at Ao Kruat is made of piles of small shells. 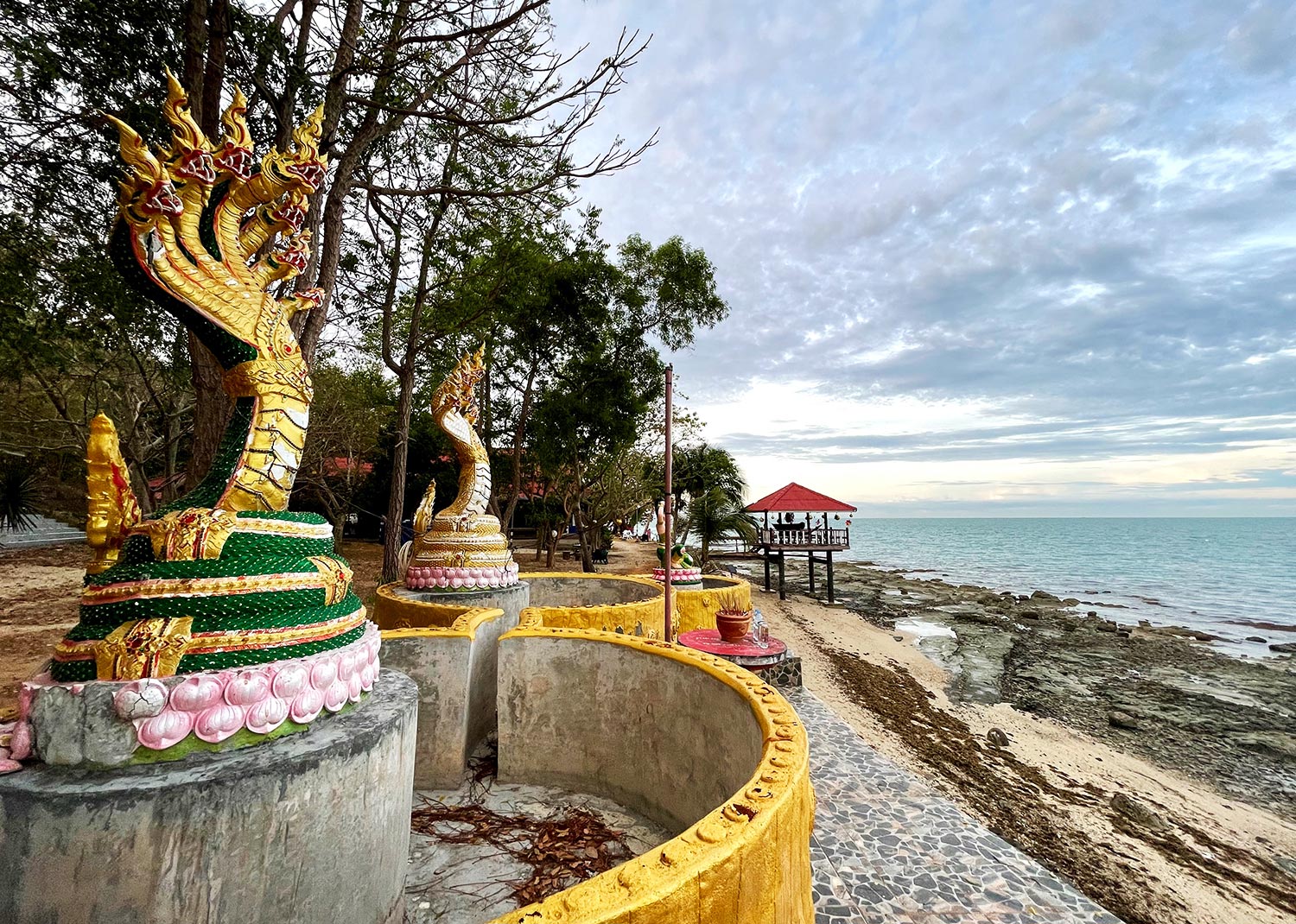 Koh Nok Phao temple is located on the beach next to the Ban Koh Nok Phao School on the northwest of the island. Only a handful of monks live in the temple. They go out to ask for alms in the community around 7am and return about 20 minutes later. 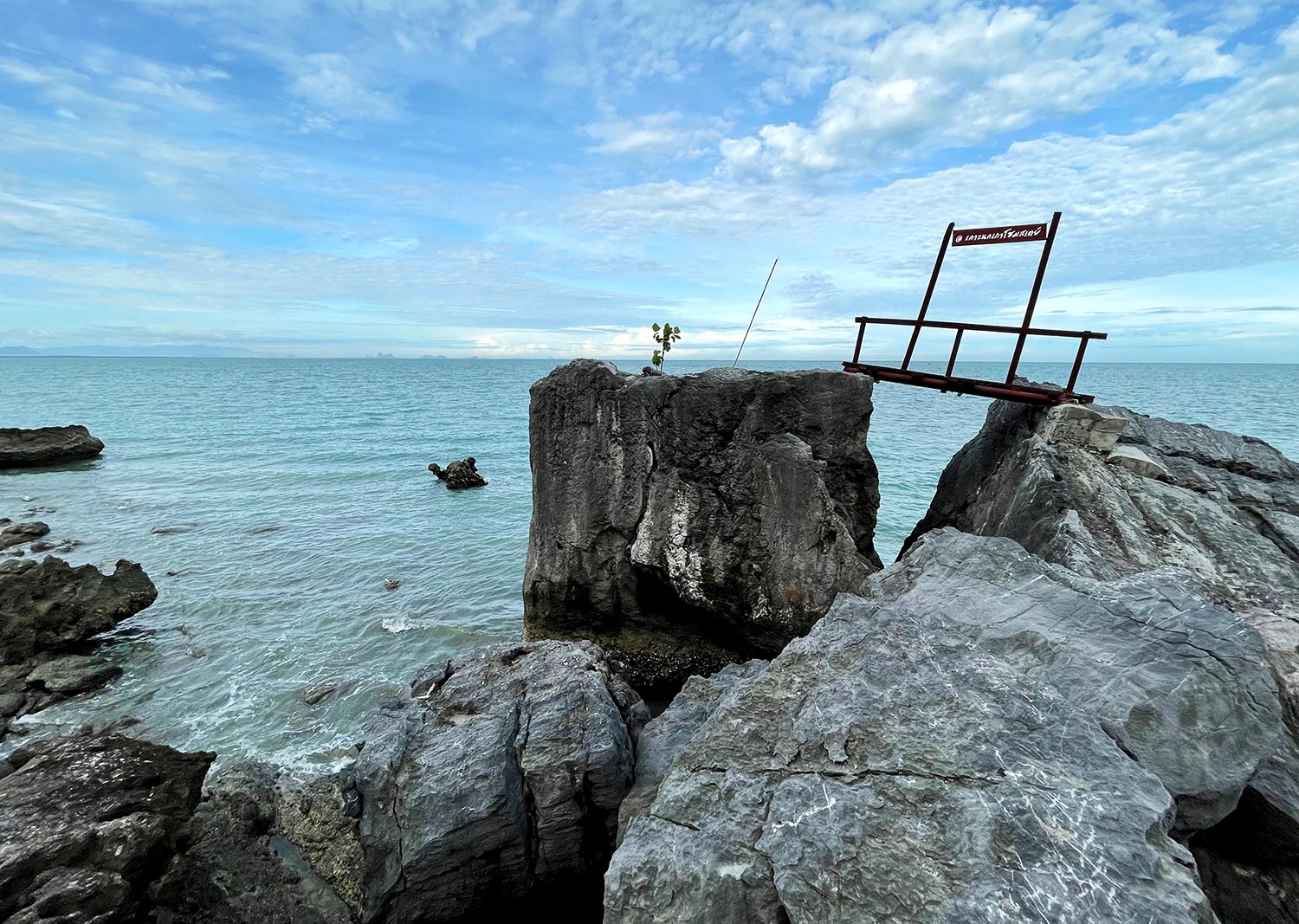 This little bridge on top of coastal rocks is a popular selfie spot on Koh Nok Phao. It may not look scary in the picture but it requires courage to walk from one rock to another to reach the bridge. 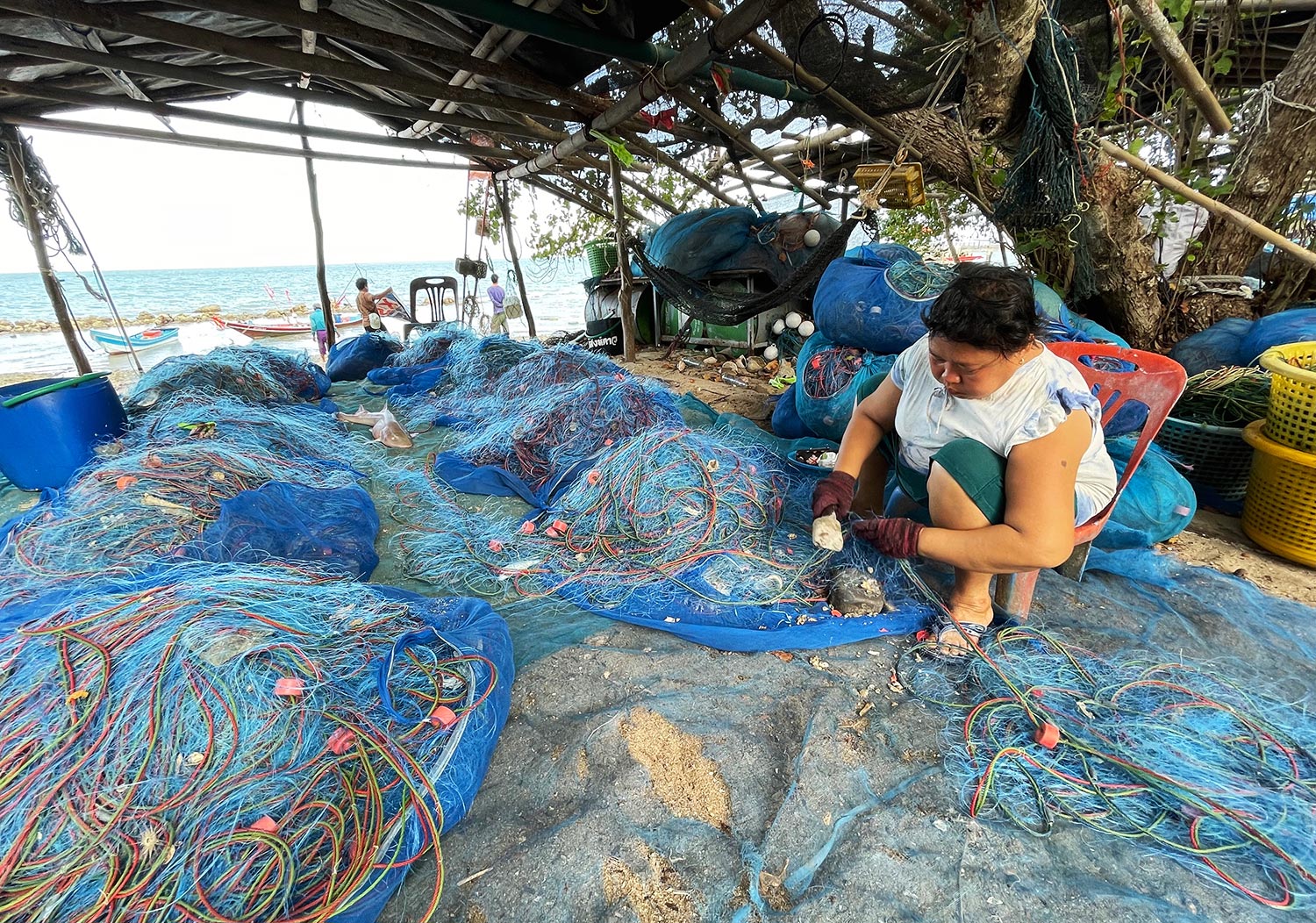 A woman hammers shells from a fishing net after a night catch around Koh Nok Phao. They catch blue crabs, fish and a small shark can be seen between the rows of the blue fishing nets. The community also has a blue crab bank and a nursery for female sponge crab. The crabs are released back to the sea along with crab larvae. The nursery is part of local efforts to help increase the number of blue crabs in the habitat.

As we got near, two long-tail fishing boats approached the ferry -- one boat was for picking up goods ordered by locals on the island while the other boat was for me. I have to admit that I was a bit excited when I jumped from the ferry to the smaller boat as it swayed on the waves. Luckily, the transfer went well and the boat took only five minutes to reach the shore.

Tipwan Sae-tae, the owner of Koh Nok Phao Ao Thian Homestay, greeted me with a big smile. She led me to my accommodation -- a bamboo hut located next to a small wooden bungalow. Each hut had its own private balcony and there was also a two-storey house that could accommodate 12-15 people. Across from my bungalow were two gazebos and one of them had two hammocks that you could lie down on while watching the sunset, while the other had a wooden table set, making it the perfect place to have dinner and a little chill-out.

The beach on Ao Thian was scenic. It is a good spot to swim as the sand is soft and the water shallow and calm.

Koh Nok Phao welcomed its first tourists a couple of years ago. Today, you can visit the island for a day trip or an overnight stay. This is a place where you don't have to do anything, except just lie down on a quiet beach, swim, rest and have tasty fresh seafood.

But if you want activities, you can rent a bicycle and explore the island. The attractions are nothing fancy but enough for those who love selfies.

From my homestay, I rode a bike further north to see Ban Koh Nok Phao School, which faces the sea and also has a playground for children. You may spot colourful graffiti on a classroom wall displaying a pirate boat carrying smiling kids, and swimming in a healthy sea next to the boat were two whales.

Sharing a fence with the school is Koh Nok Phao temple, which also has gazebos on the beach. The monk's quarters are modest and may remind you of beach huts. Not far from the school is a health centre and then the narrow concrete road ends.

Heading back to my homestay on Ao Thian, I biked south and passed through a village to a check-in spot on the island. The place is called Saphan Wat Jai, meaning a bridge to challenge your guts. It is a small bridge built over two big coastal rocks. You need to be extra careful while stepping over some rocks before going to the bridge. The way is quite slippery.

The road from Ao Thian to Ao Kruat is built along the shoreline. From time to time, you can see small fishing boats heading to or out from the village. The road is only wide enough for two motorbikes. A popular vehicle on the island is sidecar motorcycles, which can accommodate a few passengers.

The seafood dishes of Koh Nok Phao Ao Thian Homestay are second to none. Each dish looks appealing and is also tasty. The owner will ask you to choose a dish a day in advance so that they can prepare fresh seafood for you. I really liked kaeng som pla kao (spicy yellow soup with grouper), nam prik kapi served with chakram (spicy chilli dip with boiled seepweed topped with coconut milk) and steamed squid and shrimp.

Ao Kruat differs from other beaches on the island as it is long and made of piles of shells, stretching out as far as the eye can see. Some people have said it is a heart-shaped beach thanks to Hat Longhon, which appears during the dry season and disappears during the rainy season. The beach is also made of small shells.

From Ao Kruat, I continued my journey to the east side of the island, following a sign for a viewpoint. The wooden platform was built along the roadside but I believe it once used to be a viewpoint but has now been abandoned. It did not look safe to step on and locals told me that it was a spot for visitors to see the sunrise, but it was not that popular.

I drove my motorcycle further to the northeast of the island but the road did not connect to Ao Thian where I started my journey. I stopped my bike when I saw the road was under construction.

I left Koh Nok Phao before lunchtime due to the strong winds in the afternoon. I hired a fishing boat to take me to the mainland. It took about 30 minutes and along the way, I spotted a dolphin swimming not far from the boat.

Another small island located about 700m from Don Sak mainland is Koh Raet. The island is also home to fishermen and links to the mainland via a concrete bridge.

The island is smaller than Koh Nok Phao but it also has many homestay services. While I walked along the road built around the island, I spotted homestay signs one after another, unlike on Koh Nok Phao which has only two homestays. 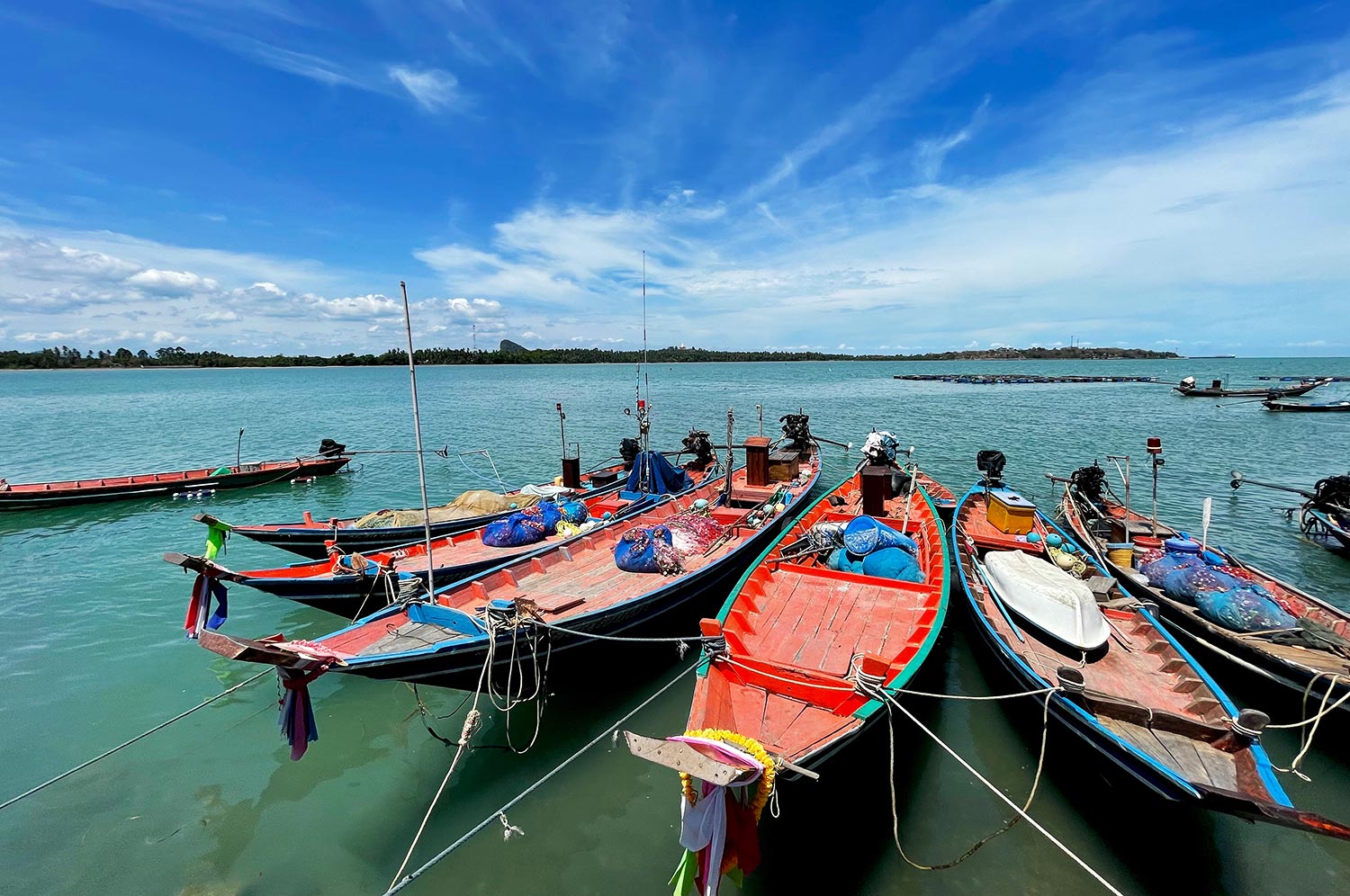 Most of the locals on Koh Raet are fishermen. Some of them dock their boats around the entrance of the island. You can hire a boat to tour around the island and you might spot some dolphins if you’re lucky. The fee is about 1,500 baht. Contact homestay service providers on the island for the service. 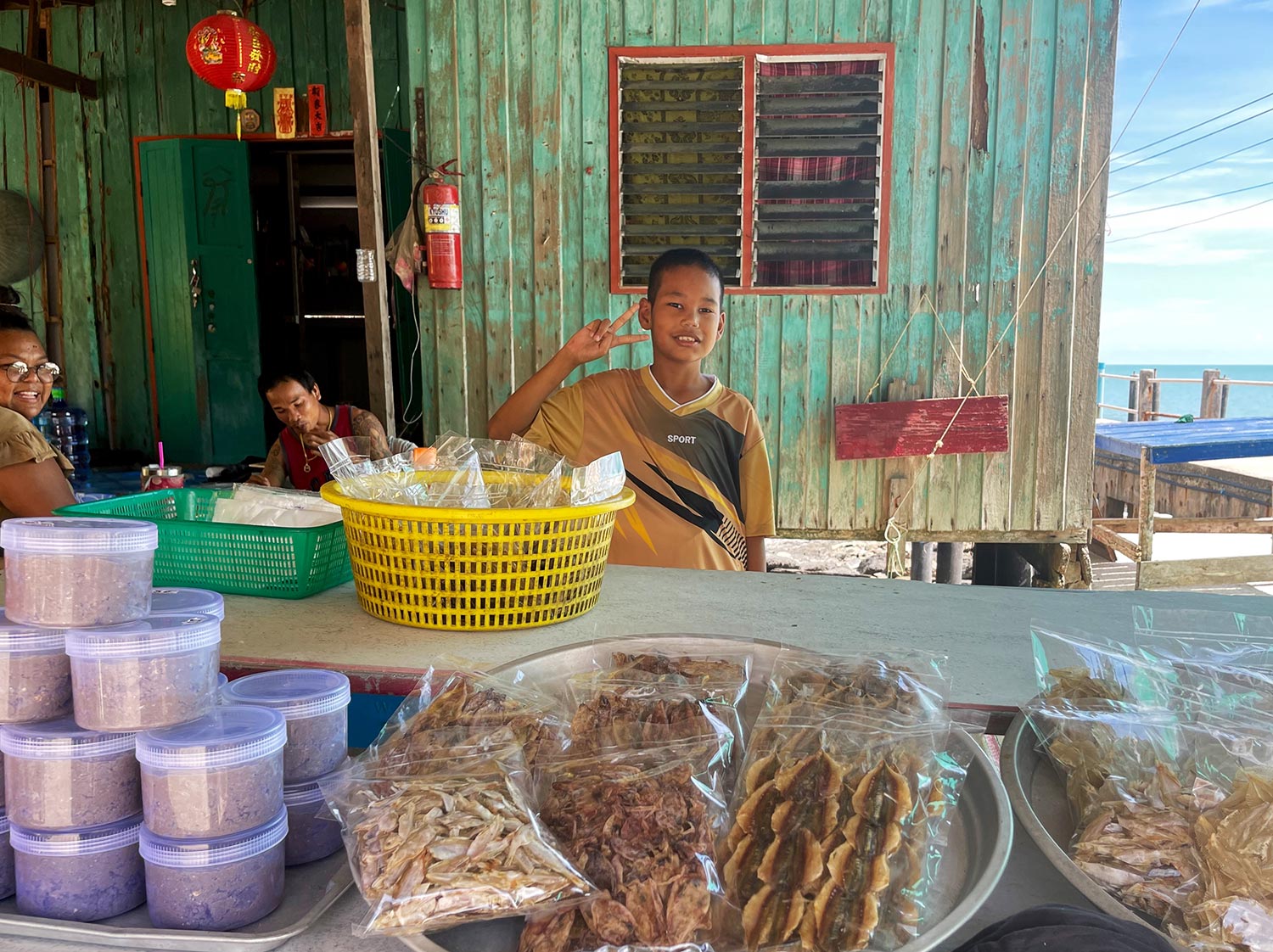 A boy helps his parents sell sun-dried fish and squid in front of their house on Koh Raet. The dried seafood and kapi (shrimp paste) are popular goods from the island. The shop also sells shells, the by-products of their daily catch. 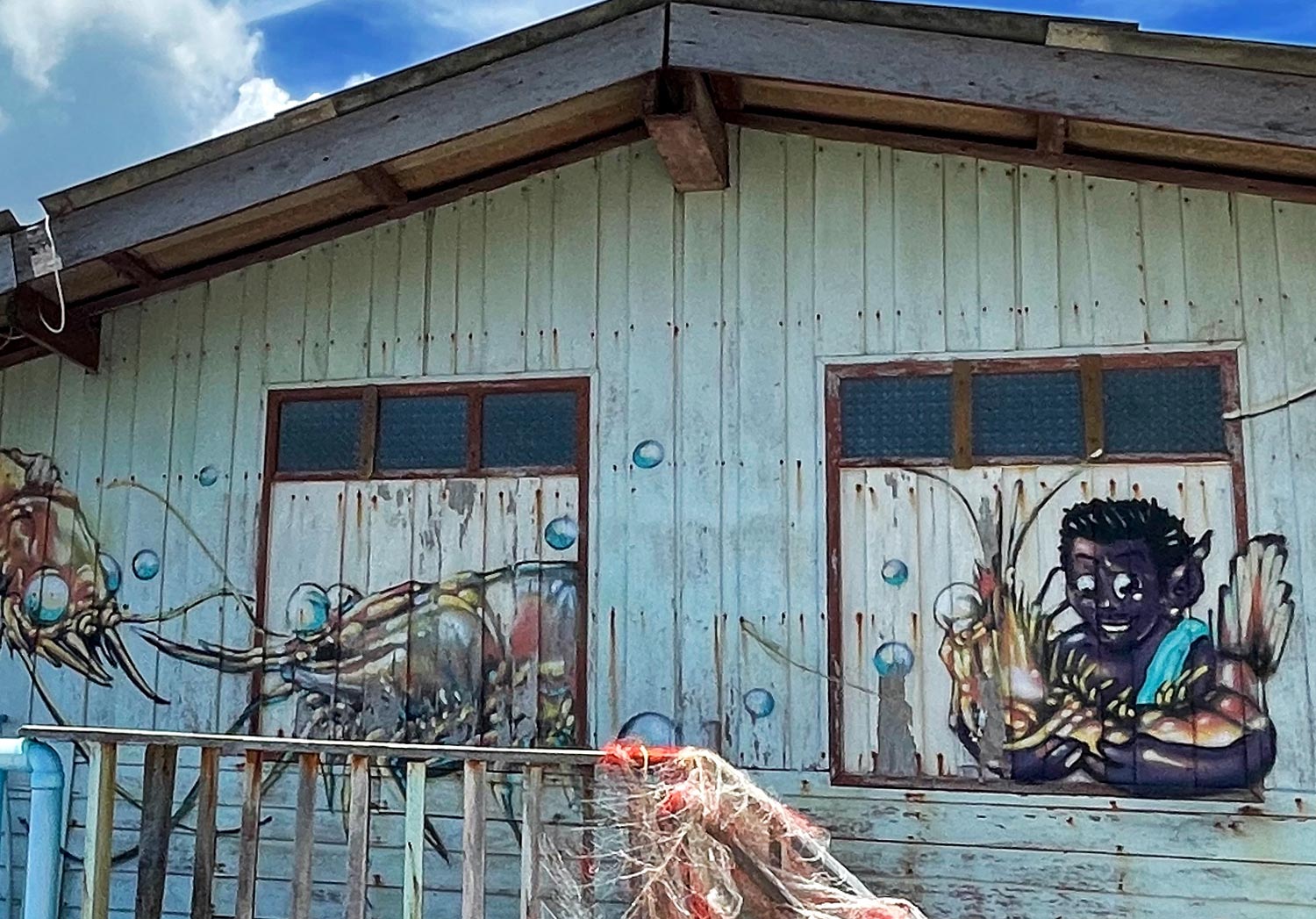 Colourful graffiti depicts the life of people on Koh Raet and these paintings create photo spots for visitors while wandering around the community.

The first stop for tourists who visit Koh Raet is paying homage to the guardian spirit of the island at San Chao Ban Koh Raet. The sculpture has a Chinese appearance as the first group of settlers were Hainanese. They built the shrine as well as digging a well for the community 150 years ago.

There is no public transportation on the island since you can walk from one end to the other within 20 minutes. I started walking from the west side to the east. Along the way, I found old wooden shophouses, some of which had been turned to homestays and restaurants. Some locals sell various types of dried fish, shrimp and squid while others offer shrimp paste.

Apart from local products, you will come across street art by volunteer artists. The graffiti reflects the way of life of locals and can add a lively ambience to the community.

During this time, you may want to find a quiet place and Koh Nok Phao fits the bill while Koh Raet can be the ideal destination for those who want to be far away from crowded places but still have enough facilities to be comfortable. You can take a day trip to both islands when you go to Surat Thani when the mood for travel returns. 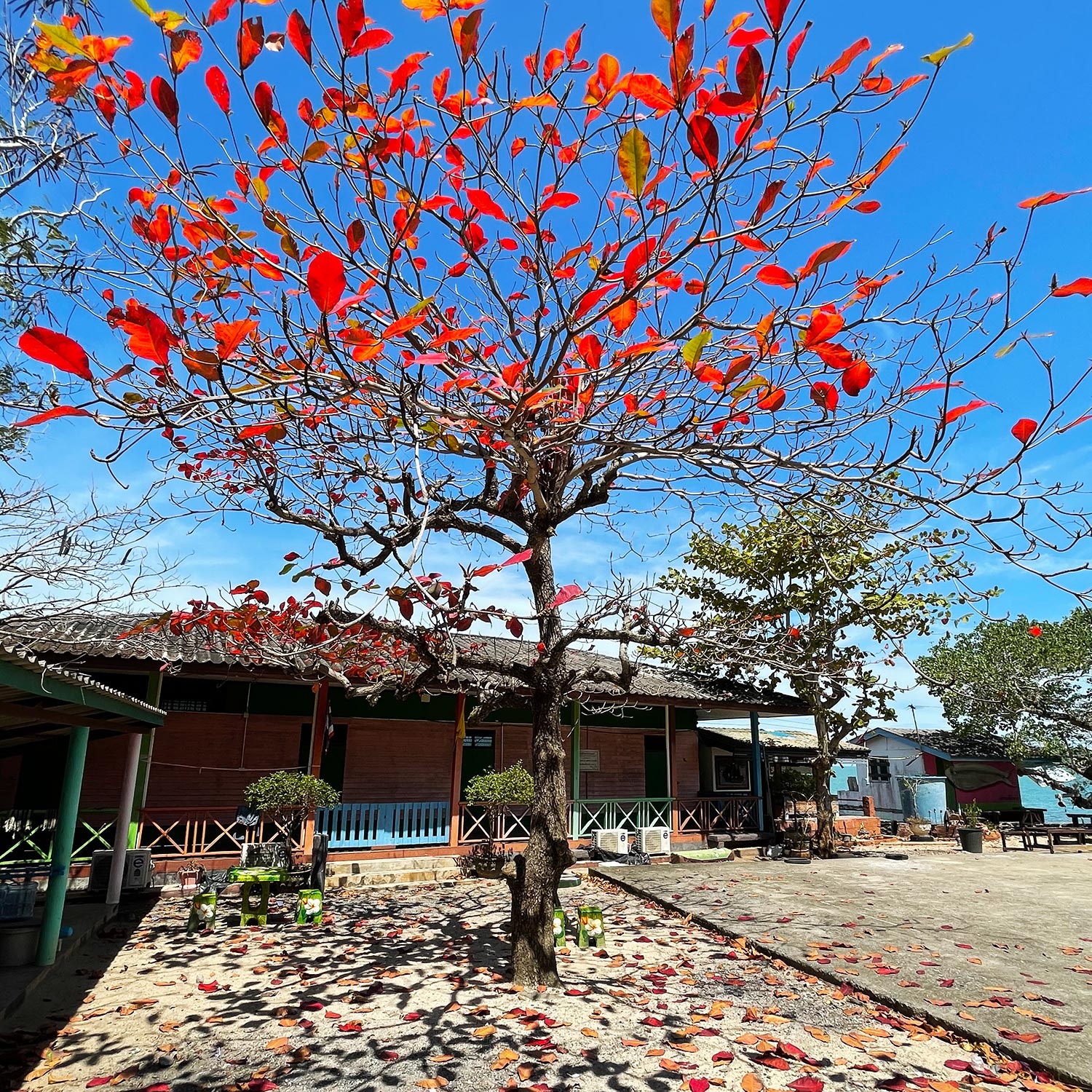 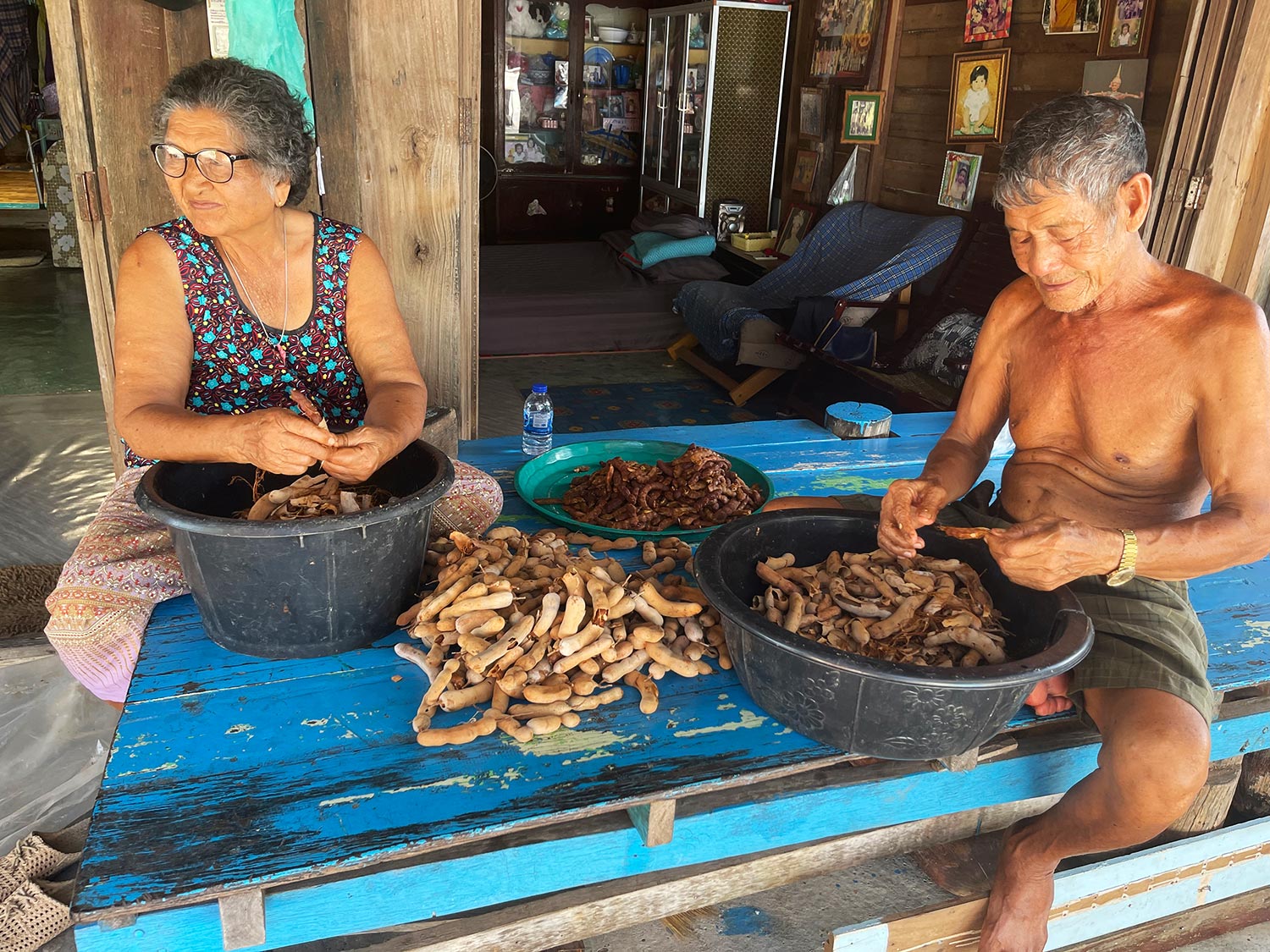 While walking around the Koh Raet community, you may come across friendly locals who want to have a little chit-chat. Most of them do not shy away from a camera too. You just need to ask them politely first. The island also has a primary school where I took the photo of the red leaves of an Indian almond tree. 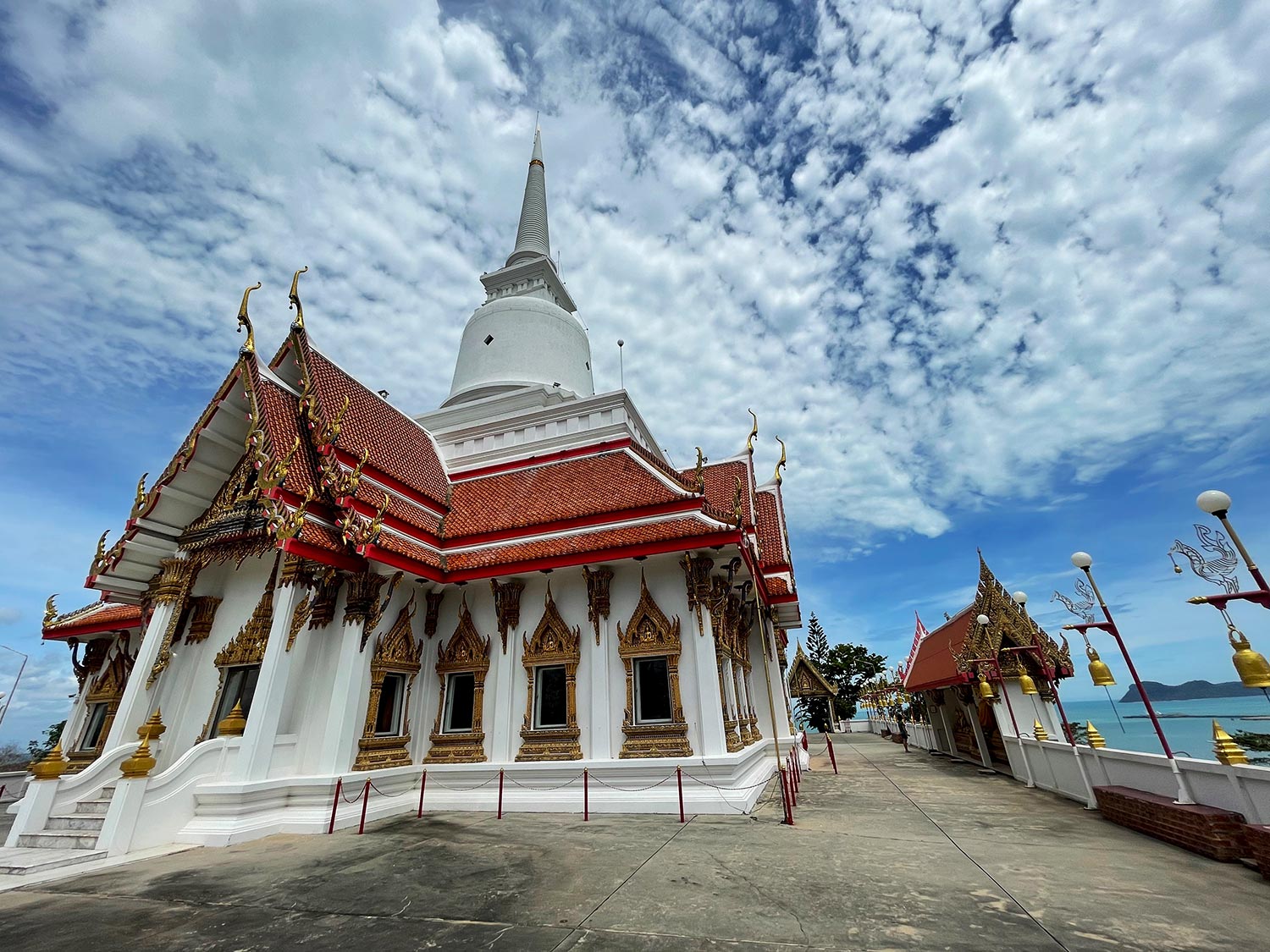 Wat Khao Suwan Pradit houses Buddha relics inside its prayer hall. Located on the top of Khao Hua Lan hill, the temple can be seen from as far as the ferry ride heading back to the mainland. The temple is also a good spot for a bird’s-eye view of the surroundings including Koh Raet. 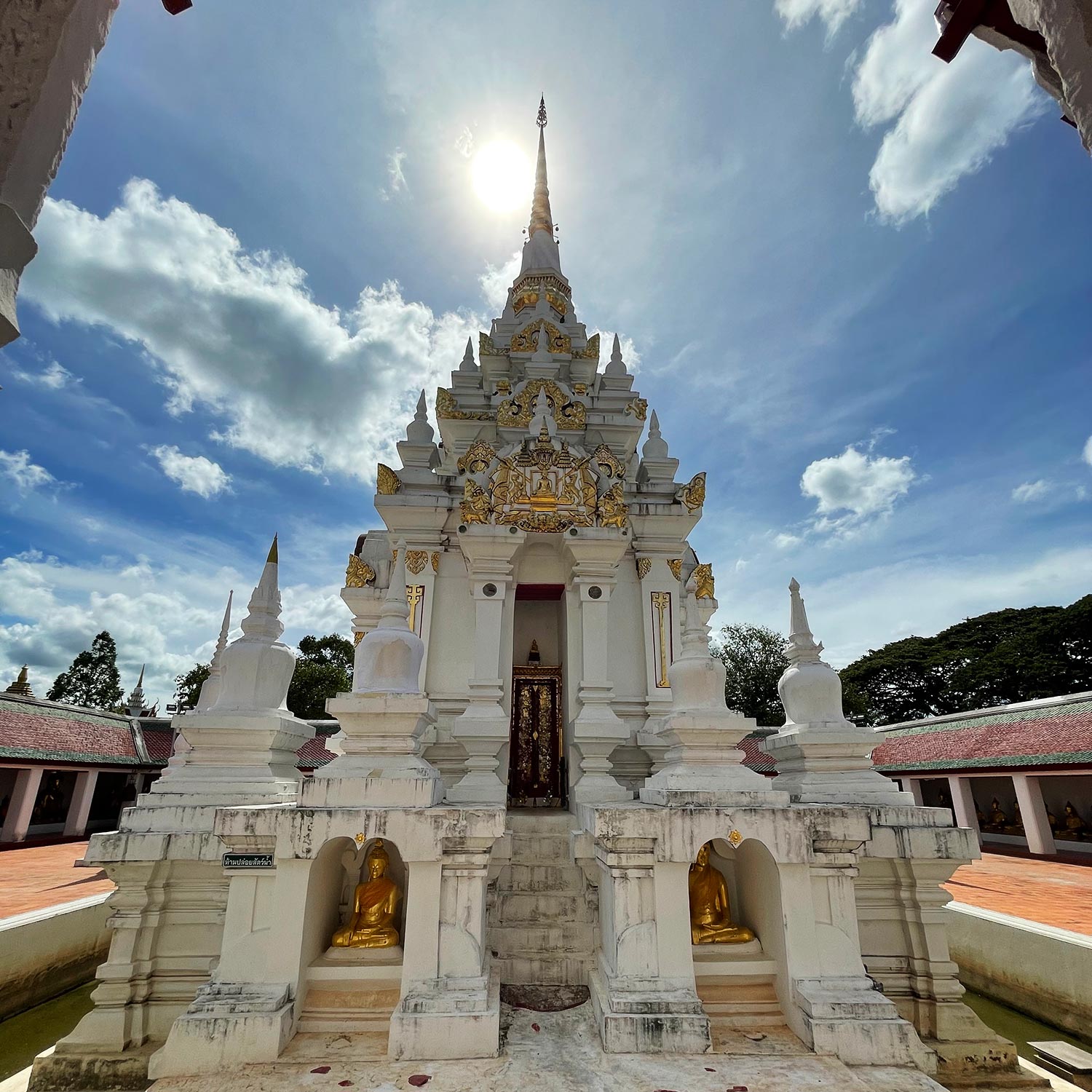 Wat Phra Boromathat Chaiya is a highly revered temple in the province. The temple houses Buddha relics in a white Srivijaya-styled pagoda surrounded by 180 Buddha images. Don’t forget to check out Chaiya National Park, located next to the temple. It has a large collection dating back to the Srivijaya period (8th-13th centuries). 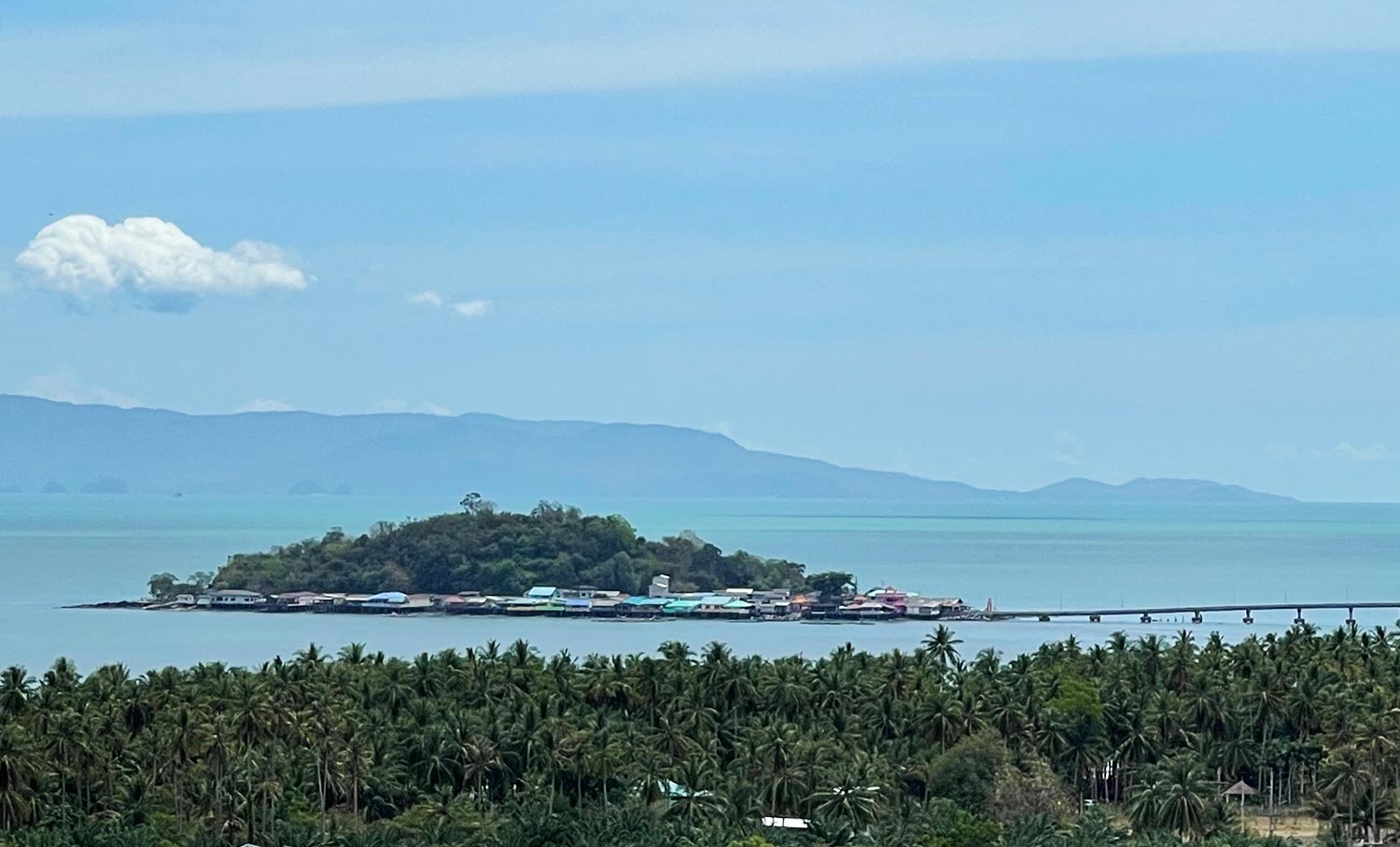 Koh Raet is linked to the mainland of Don Sak District by the Chalerm Sirirat Bridge. You can drive to the island. Parking is available at the entrance and quite limited. There is a concrete walkway built around the island. One round-trip may take about 20 minutes. 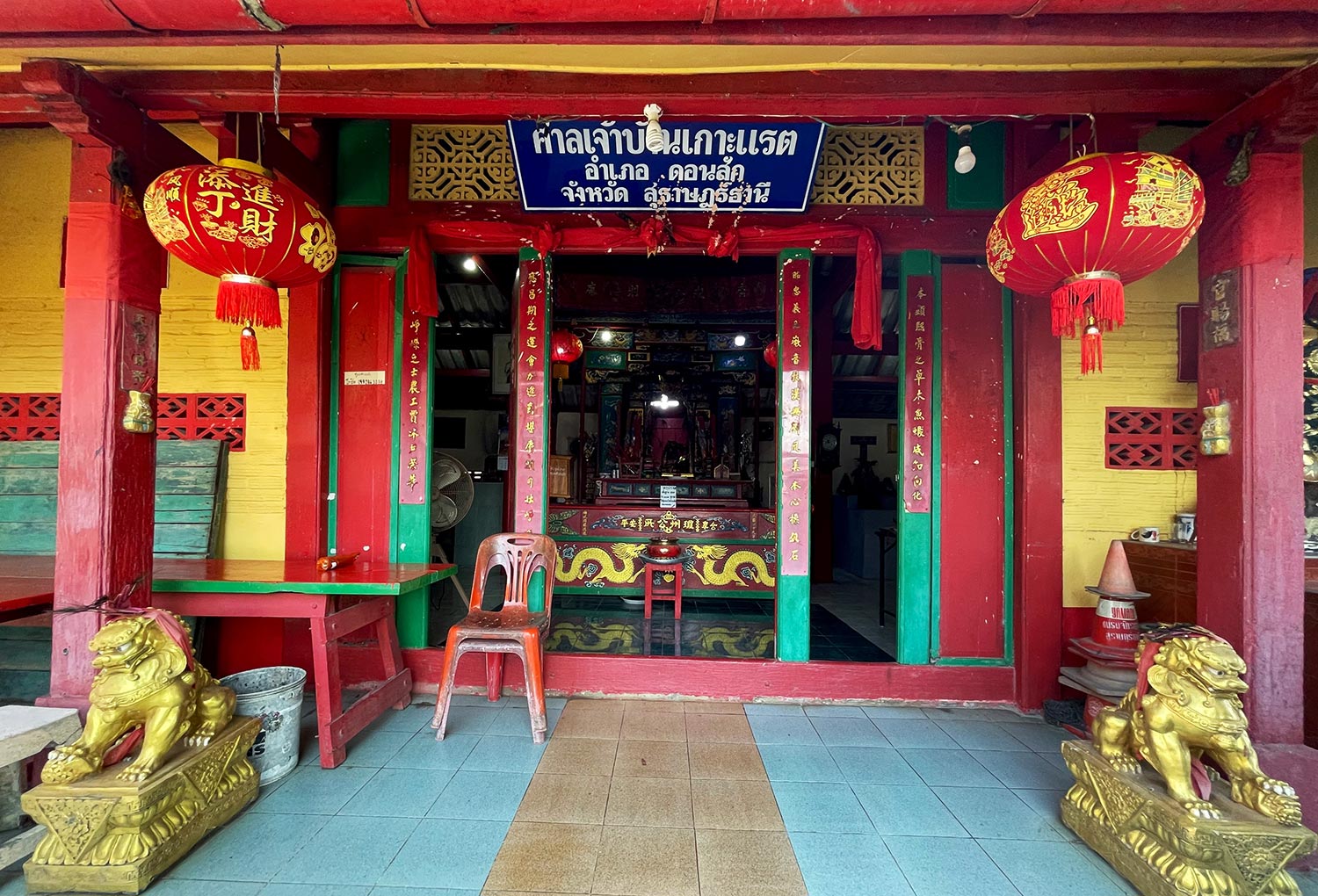 Although Koh Raet is small, it houses some Chinese shrines including Koh Raet Guardian Shrine located not far from the entrance to the island, Chao Pho Tao Chang Niang located on the west coast and Chao Pho Sue Shrine on the east side of the island. 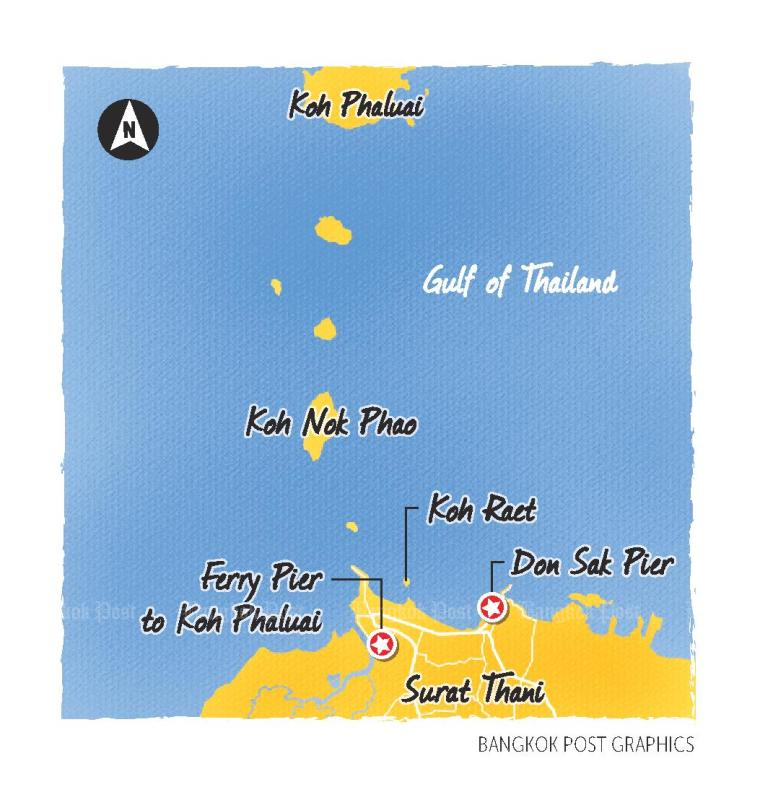