Sushiro is famous for being an affordable purveyor of conveyer belt sushi, aka kaiten sushi, with prices starting at ¥100 per plate (¥110 with tax to be more accurate). Found three decades ago, the famous sushi chain operates 600 branches in Japan and overseas. Sushiro made its Thailand debut on the seventh floor of centralwOrld.

Sushiro Thailand keeps the original Japanese aesthetic with tables, chairs and the conveyor belt in a light wood colour as are the ceiling and walls. The red cushions for your back and bottom pop out from each dining booth. Rectangular partitions are placed in the middle of the two lanes of the conveyor belt, which I assume is to provide some privacy and prevent unintentional eye contact with someone at the opposite table. The place is abuzz with enthusiastic staff and the continuous movements of sushi conveyor belts.

If you've never experienced a rotating sushi experience before, fear not as a waiter will give you the basics on how to order through a touchscreen tablet, how to help yourself to the free green tea (put green tea powder in a cup and fill it with hot water from a tap at your table) and so on.

I've been to Hamasushi in Okinawa so I already have a kaiten sushi experience but what set my first time at Sushiro apart is the fact that it has two levels of belts. 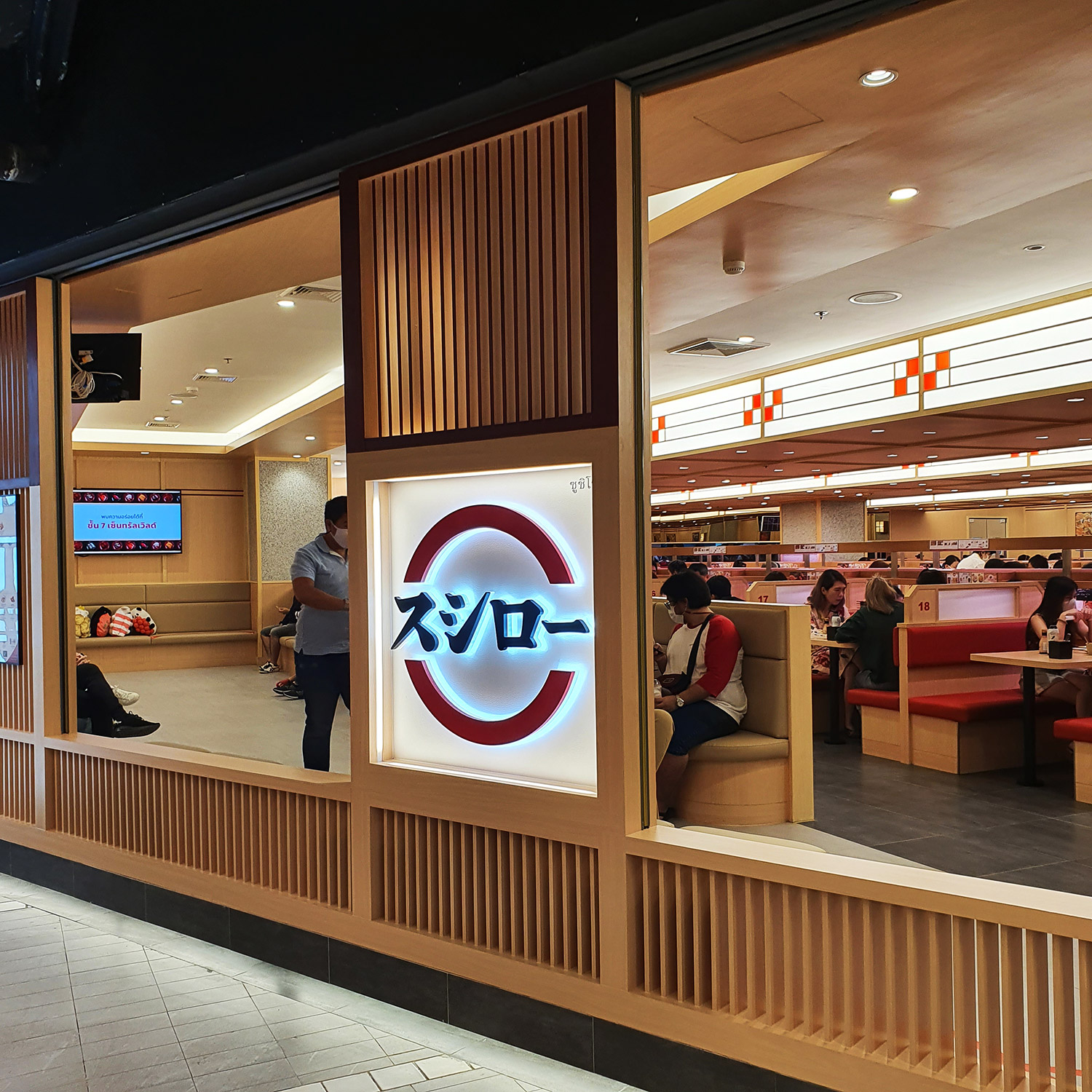 You can help yourself to the sushi parade on the conveyor belt before you or "the road" if you will, but there's an upper-level single-lane belt, which I would like to refer to as "the expressway".

The expressway is for when you want to order sushi freshly made for you and, next to each table, there's this short roller conveyor that connects to the expressway for your order to literally park in. You see, after putting in your order (up to four items each time), it'll soon be running down the expressway and a lever will automatically trigger to direct it to go into your roller conveyor and park next to your table.

Sushiro Thailand categorises their sushi into four price tiers; B40 red plates, B60 white plates, B80 yellow and B120 black. There are almost 100 choices of sushi, mostly nigiri, to choose from, on top of fried food, udon, ramen, soups, appetisers and desserts. You'll be spoilt for choice. 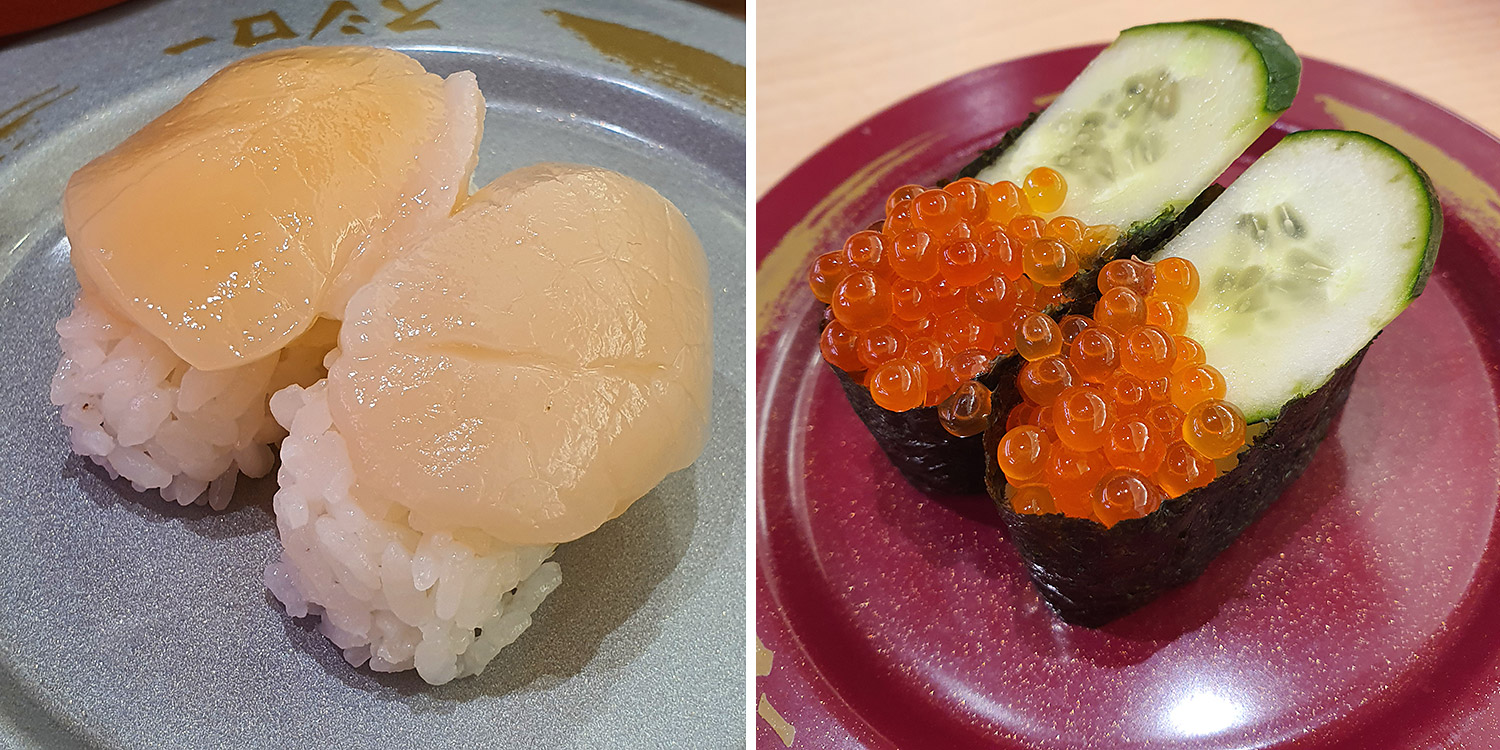 Now that I've covered the technical side, let's talk taste. From the most basic tier, I find Salmon or Shrimp with basil sauce and cheese a crowd-pleaser. Ikura gunkan pops in my mouth and comes with a refreshing touch from the cucumber slice. Another gunkan I would recommend is the tarako roe as its saltiness goes well with the rich mayo.

From the second tier, the Hotate is fresh, plump and slightly sweet as it should be and you can have it as plain nigiri or with tomato and basil sauce. Grilled unagi and grilled anago come at B80 a piece and both are quite succulent but the former feels fattier. Until Apr 30, nigiri otoro is on offer at B40 a piece and it has this delicious ratio between meat and fat that I enjoy.

Once you're done stuffing yourself silly, stack up the plates according to their colours on the side of your table that isn't facing the belt so a waiter can calculate your bill by scanning them with a gun. I spent around B650 to fill up my belly, an overweight-man one mind you, so a meal at Sushiro is affordable and comes with good variety. The sushi is good and good value for money. However, taste-wise, I don't think there would be real wow moments for advanced sushi fans.

If you haven't tried kaiten sushi at Sushiro, now is your chance to do so and without having to fly to Japan (you can't and shouldn't right now, anyway). However, getting a seat there can be a bit tricky. 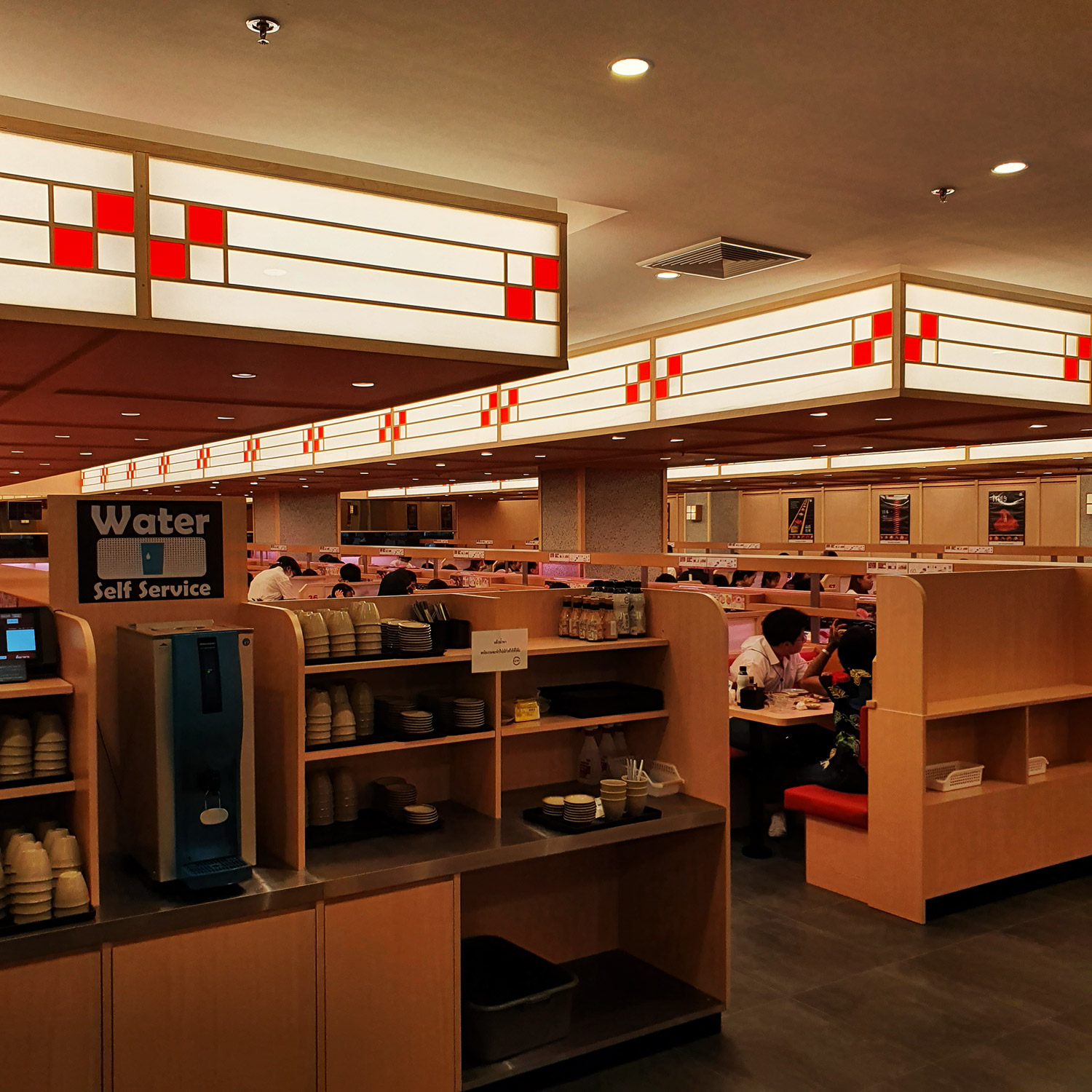 If you book your seat via its Sushiro app, you'll see that there are no empty slots until late May. I got my seat because someone gave up theirs so you'd better check back with the app to see if there's an empty seat available on the day you want despite the app previously noting that it's fully booked. The staff told me that walk-in customers may get seats in less than two hours on a weekday.

The second Sushiro branch opens in May at Future Park Rangsit so those who live in the suburbs don't have to go far for pay-per-plate sushi.

A new life far from Thailand

Reward your loved ones with these tote bags