Just over a month ago on the night of March 27, the Armed Forces Day of Myanmar celebrated with a reception organised in the presence of the military attache and diplomats from various countries in Myanmar's capital city Nay Pyi Taw. Yet on the same day, jet fighters of the despotic Myanmar Army were dispatched for an airstrike on the town of Day Bu Noh Mutraw, where the headquarters of the Karen National Union's (KNU) Brigade 5 is located. The mission caused a number of casualties and sent thousands of villagers running for their lives into the forest and towards the Thai border by the Salween River in Mae Hong Son.

The Myanmar Army had started a massive campaign against the KNU. Meanwhile, drones were also sent by the Myanmar Army to patrol areas under the control of the KNU and this is still going on even now.

We were given an opportunity to see the damage with our own eyes. One of the targets of the airstrike was a KNU military base in Thi Kaw Hta by the Salween, just opposite Mae Sariang District in Thailand. It was hit by bombs from Myanmar jet fighters on March 28 and a large sinkhole in the land clearly attests to the massive impact. One may wonder why the Myanmar Army would dare to send planes to operate in an area so close to the Thai border without fear of backlash or damaging relations with their neighbour.

The villages have been completely deserted like Thi Pho Hta, a coconut grove village to which we have made several visits. Now, those who remain are pet animals, dogs, cats, buffaloes, and sheep. There is no sign of humans as the villagers have fled the war to live in the forests.

By foot, we went to meet several such families hiding in the forests. Naw Ker Thu's family built their makeshift home on a hanging cliff close to a stream on the mountain. She told us that she had come here with her children since the night of the air attack by the Myanmar Army. Her four children are young, with the youngest still being breastfed. There is barely any food, except 1kg of rice which is gradually shared among them. Rice has to be cooked during the daytime and they dare not start a fire in fear of being spotted by Myanmar drones. 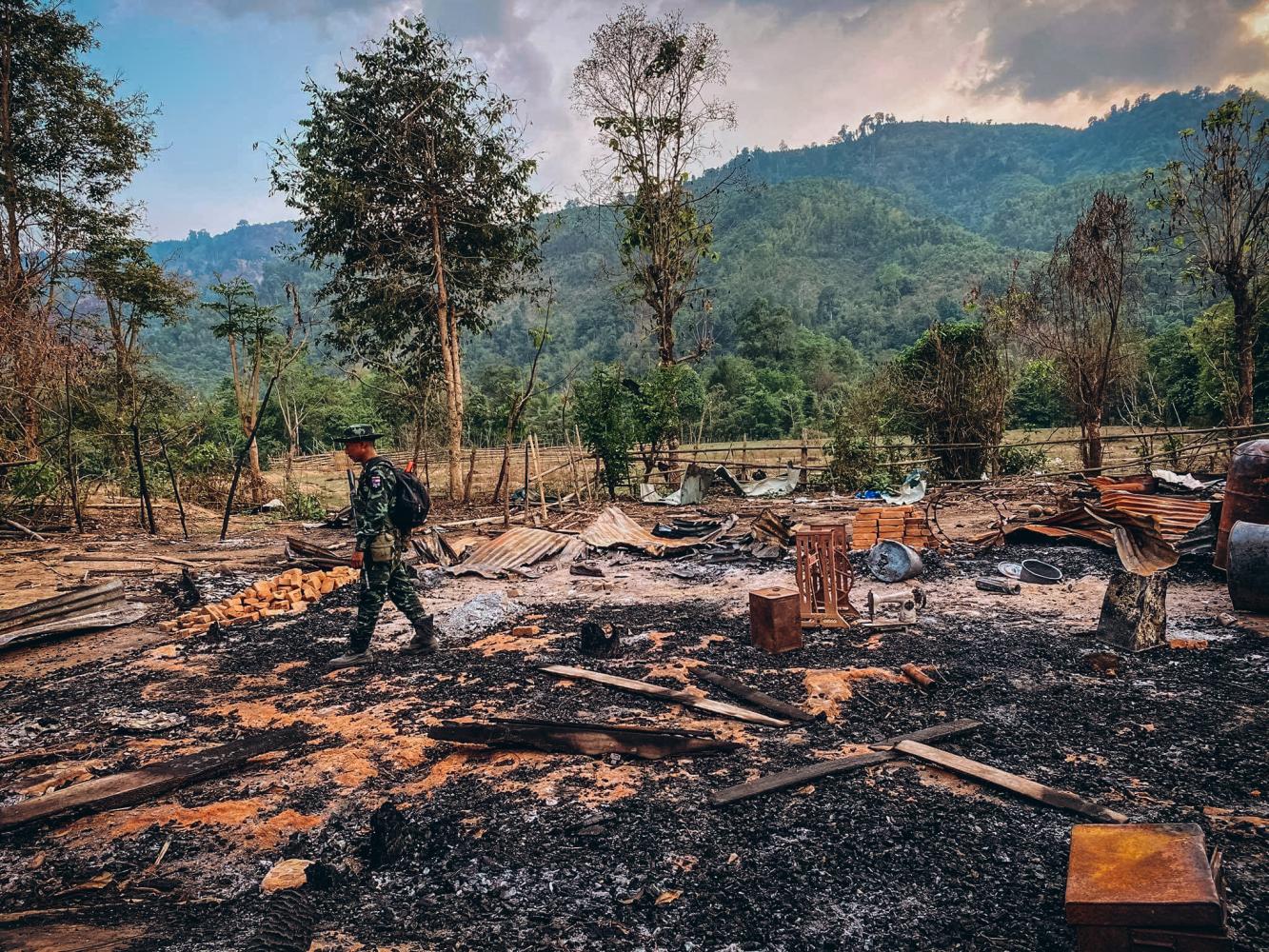 "Actually, we have some rice left in the barn at home but I have no guts to go and bring it here. I dare not do husking with mortar and pestle either fearing the noise will alert Myanmar soldiers that we are hiding here," said a Karen mother of four in a soft voice.

She and other villagers have to hide even in the dark as they are afraid to turn on a flashlight at night. After dusk, everyone heads to their sleeping quarter in constant fear. What keeps them warm is support from their neighbours and the protection of the KNU forces.

Another family I spoke to came from the same village on the night of March 27 when the Myanmar army dropped bombs and they have not yet returned home. For displaced people, there is nothing else they yearn for more than peace and tranquillity.

"I want to return home to tend to my pigs, chickens and my farm. The place where I now stay is a makeshift home we come to till the farmland. At night, we have to find gaps between rocks in the forest to sleep as I dare not sleep at home. I have been on the run for several weeks. My children's health has deteriorated and they are vomiting and have diarrhoea. As the rainy season is approaching, I am also worried about malaria. Given the situation, I have no idea when I can return home. The Myanmar army's reconnaissance aircraft can be heard every day. It is very difficult now. I have received some rice from rationing but it is not enough so I have made the trip to Day Bu Noh by the Yunzalin River at least five times to bring some rice back," said a housewife. 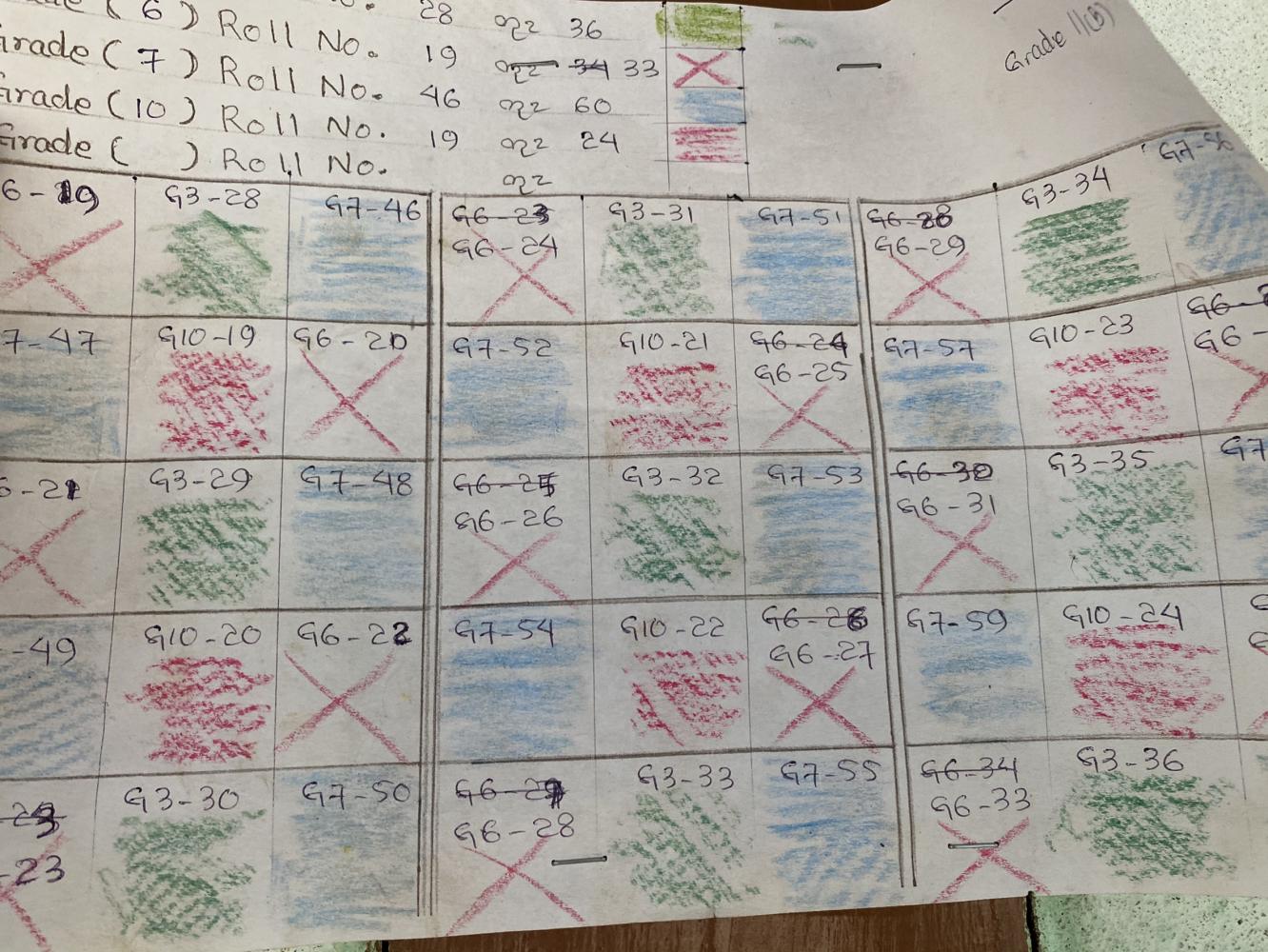 A class schedule for Karen ethnic students hangs on the wall of an empty school. The Myanmar Army's airstrike in Karen state has forced residents to hide in the jungle or by the Thai border. Saw Kha Pay Mu Nu

Besides food, other basic necessities are also in short supply for the displaced villagers. What makes them worried is the need to prepare for the upcoming farming season. They need to plough their land, prepare for irrigation, and grow upland rice as most villagers have prepared their land for rotational farming. However, as long as the noise of the planes can still be heard, they dare not go out to the field. Many have said that if they cannot grow rice this year, they will be left with nothing to eat next year.

We also spoke with Law Moo, a 62-year-old Karen, who was preparing land for rotational farming. He recalls that the night the bombs were dropped, he and his family escaped to the bank of the Salween and crossed the river to seek refuge in Thailand. However, they were pushed back by Thai authorities and feared the Thai armed forces. Thus, they decided to seek refuge by hiding in the forests.

"It was very difficult to seek refuge on Thai soil. We had to take care of each other. I felt ashamed being told to return and feared the Thai armed forces. However, we have discussed among ourselves and have decided to return, regardless of how dangerous it is. Initially, the men were told to return leaving behind women and children. However, now everyone has been told to return and we have to do that even though we are scared since there have been reports about another airstrike by the Myanmar Army. I have started sneaking to tend to my farmland but I have no idea if after planting the rice I'll be able to return to harvest it. However, I have to plant it and we want to rely on ourselves. If we have to run again, the donated rice will not be enough," said a breadwinner of a Karen family.

We also met Mu Htee, chief mobile teacher trainer for the Karen Teacher Training College. He recounts how the attack physically damaged the college located by the Salween just opposite Mae Sariang District. The teaching has been affected by the situation and the uncertainties. Both teachers and students feel very unsettled. During the airstrike, everyone had to leave for refuge in Thailand but they have just returned to the Karen side. As the new semester is approaching in this unstable situation, they may need to postpone school reopening. 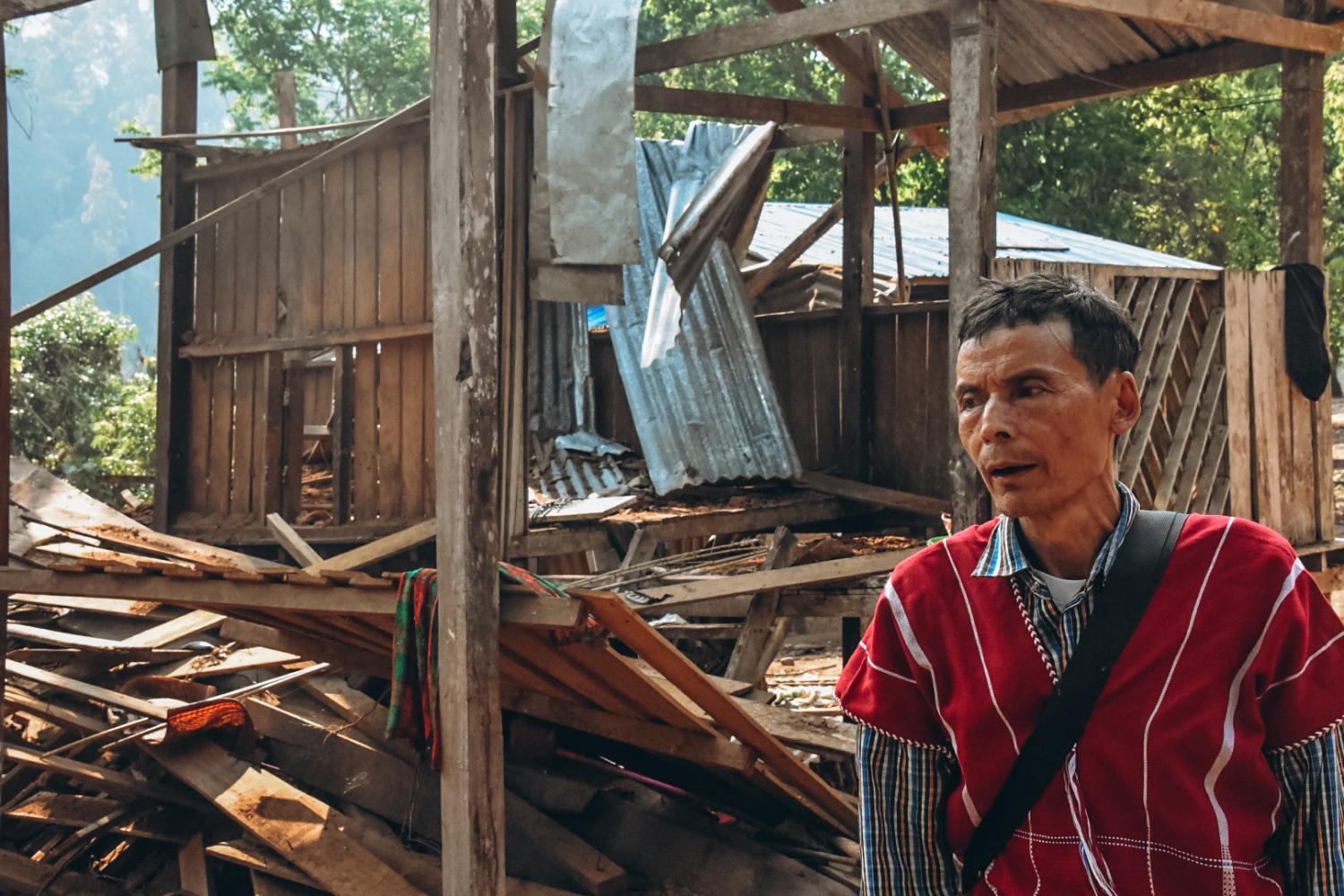 The chief trainer discusses two key issues. First, since we live on the border, what we are asking from the Thai authorities is understanding. If the situation escalates such as with airstrikes, we are asking them for a chance to cross the river to stay in Thailand temporarily for our safety. Second, the transportation of humanitarian support to help people affected by the violence should not be impeded. Access to food and other support to help villagers survive should not be blocked since the villagers have been living on Karen land and face an invasion by the Myanmar armed forces.

In Day Bu Noh, we met Saw Tender, the Mutraw District Governor and president of the Salween Peace Park who said that it is the people who bear the brunt of the attack. The targets of shelling are not only the KNU's military bases but civilians' homes and schools. If the Myanmar Army wants to attack, they should just target KNU military bases and not bomb civilians. The attack on Day Bu Noh this time claimed the lives of at least four young children and villagers. The despotic Myanmar Army's operation on Karen's ancestral land is inhumane. The terrorised villagers have much to fear to conduct their normal life and instead have to hide in the forests. Some try to seek refuge by crossing to Thailand and stay there temporarily as it is important to stay safe.

"I hear that Thais have sympathy towards Karens fleeing from war. They lavish us with lots of donation and I really appreciate the kindness of Thais who understand the suffering and the agony of the Karen people who have been affected by operations of the Myanmar Army. I really appreciate your understanding," said the President of the Salween Peace Park.

From the village in which people lived peacefully in the midst of abundant natural resources, mountains and forests and where the ethnic Karens had been able to practise their traditional way of life since time immemorial, now it has become deserted due to the heinous nature of war. The desire to take control over the land of other people has prompted the Myanmar Army to launch this cruel and indiscriminate operation and those who bear the brunt are just ordinary people.

Saw Kha Pay Mu Nu is an environmental and human rights defender working on the Salween. 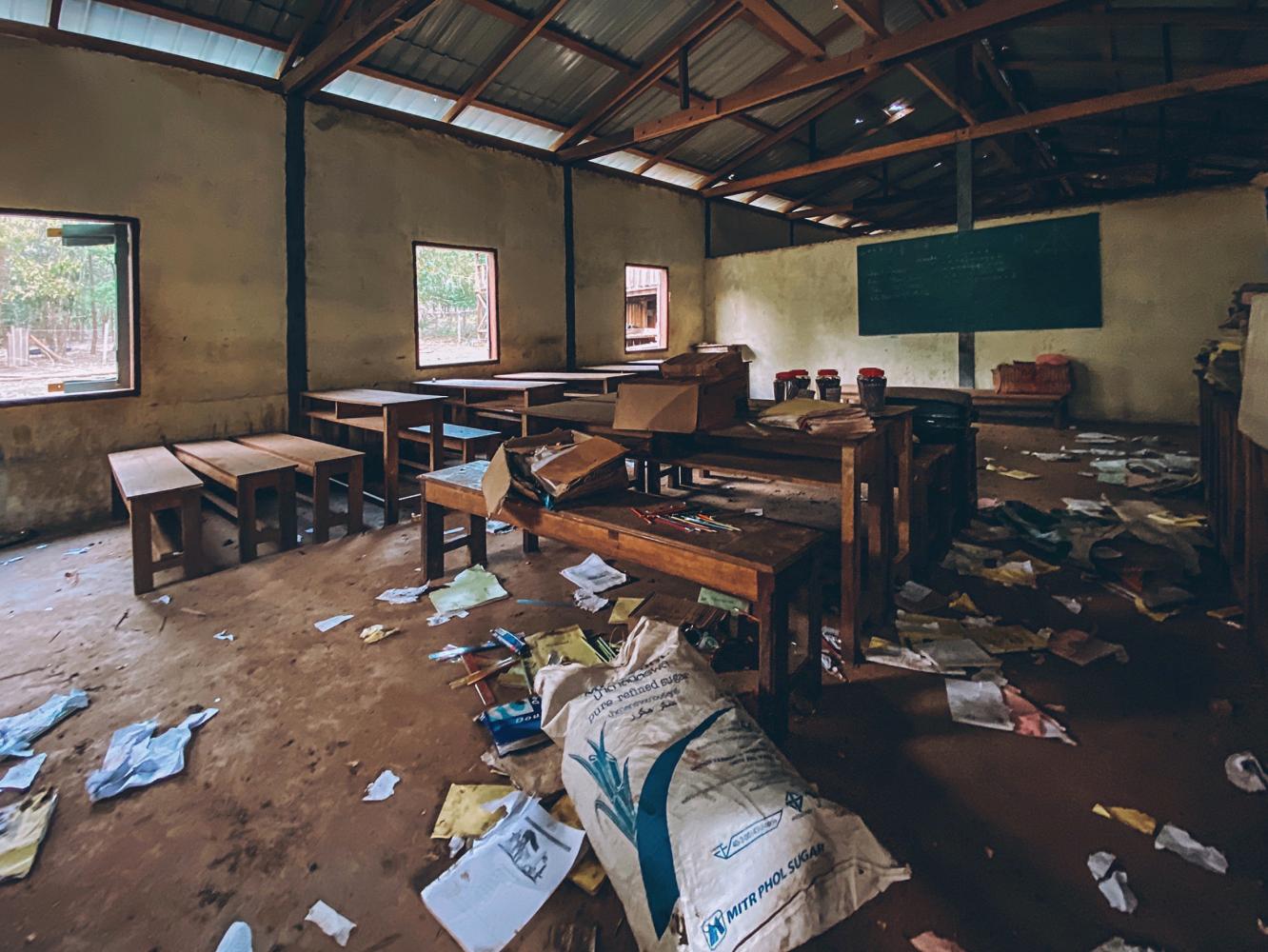 At least two Karen high schools were attacked. This one is at Day Bu Noh. Saw Kha Pay Mu Nu