Fans Tuk Up tuk-tuk cause

The coronavirus outbreak has sounded the death knell for tuk-tuk drivers. No sooner after they had started recovering from the absence of foreign tourists, the third wave of the pandemic kicked in last month. Fortunately, local fandoms are throwing lifelines to them. When passengers are nowhere to be seen, drivers are going around with idol posters on their vehicles.

Thitipong Lohawech, a veterinarian student at Kasetsart University, said his father has run a tuk-tuk garage for more than 10 years but drivers have not been able to earn any income after the country went into lockdown during the first wave of the pandemic last year. Thitipong and his friends decided to found Tuk Up to provide new services via tuk-tuks.

"We let our drivers use tuk-tuks for free and give them 50 baht each for petrol. Unfortunately, they are suffering from the latest round of the outbreak. Last year, student protesters ran many campaigns via our tuk-tuks because it is cheaper than posting advertisements at shopping malls," he said.

Since then, tuk-tuks have provided advertising services to international and local fandoms who want to shower their idols with support on special occasions, such as birthdays and comebacks. Around 300 tuk-tuks have signed contracts with Tuk Up. Currently, there are more than 10 events per month. For example, Amanda Obdam is joining the 69th Miss Universe Pageant in the United States. Fans asked over 50 tuk-tuks to see her off on April 27.

Customers can choose locations and types of banners. Tuk-tuks often run in Bangkok's commercial districts, such as Siam Square, Saladaeng, Sukhumvit, Hua Lamphong and Yaowarat. While the rear poster costs 1,000 baht per month, the side poster costs 500 baht. Prices are lower if customers bring their own banners.

Thitipong said advertising services are the main source of income during the third wave of the pandemic. When fans hail tuk-tuks with idol posters, they not only take photos but also get in.

"We are now putting up a poster of Krit 'PP' Amnuaydechkorn. Fans are showering their love for him. Drivers get around 1,000 baht per month. It means a lot to them," he added. 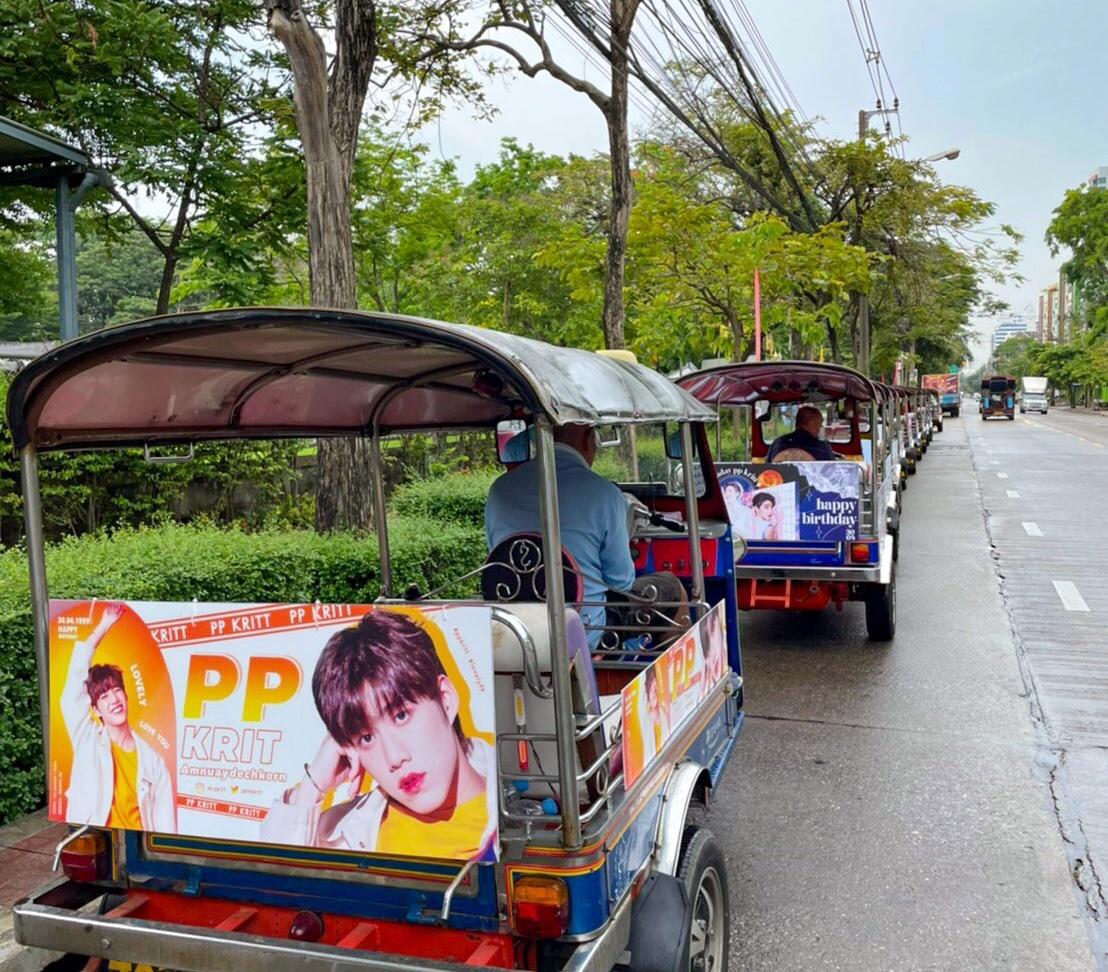