A Bangkok woman is urging police to stiffen the charges they have laid against a couple who assaulted her older brother, leaving him in danger of losing his life.

Kulakarn Kornnitaunchasa, 50, said she met the couple when they picked up her brother, Chatchai Kanthad, 55, from her home in soi Pracha Uthit 28, Chom Thong district, on April 26. 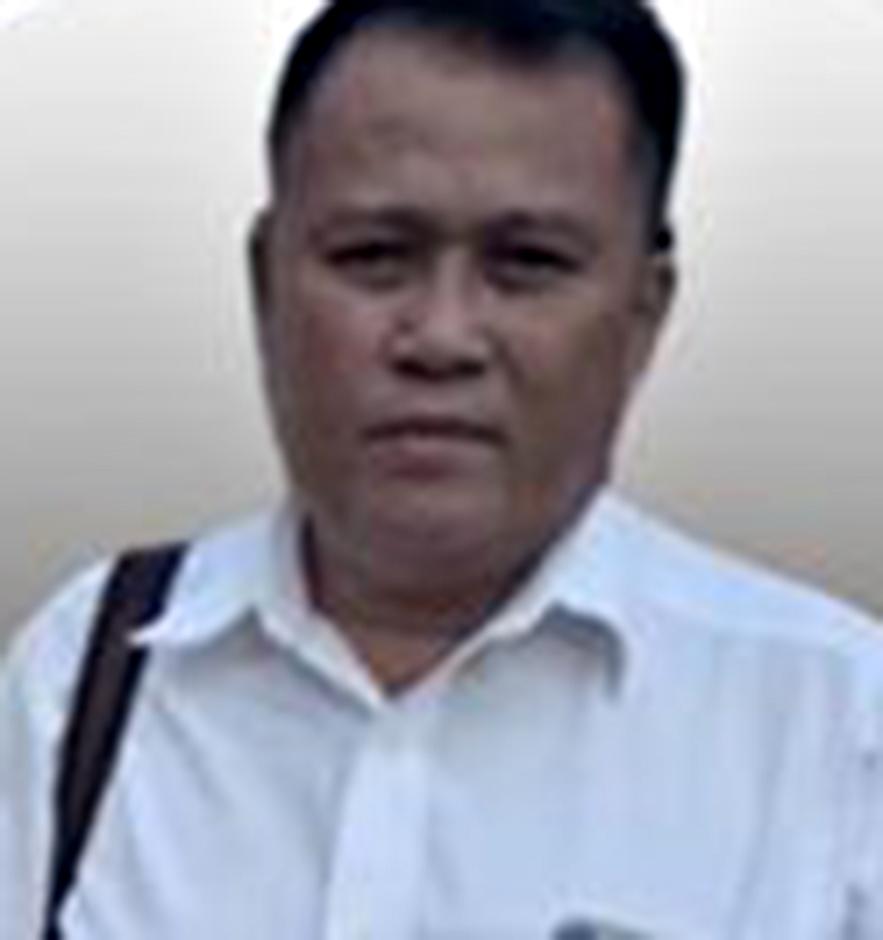 They said they were taking him for a meal though Mr Chatchai's family was unable to contact him again that night. CCTV footage later shows him being attacked and left for dead in a dimly lit soi.

They learnt about his fate when Somdej Phra Pin Klao Hospital called the next morning to say he had been admitted. Mr Chatchai, found in Phra Ram II's soi 35, Chom Thong, was bleeding from the brain and stomach, and covered in bruises. His stomach injuries required several operations to stem the bleeding.

The family complained to police and on April 2 Tha Kham officers nabbed the pair who picked him up at the house, Siriwan Limkaisaeng, and Theerayut Duangthai, both 31, in Nonthaburi. They were charged with jointly assaulting Mr Chatchai causing serious harm. 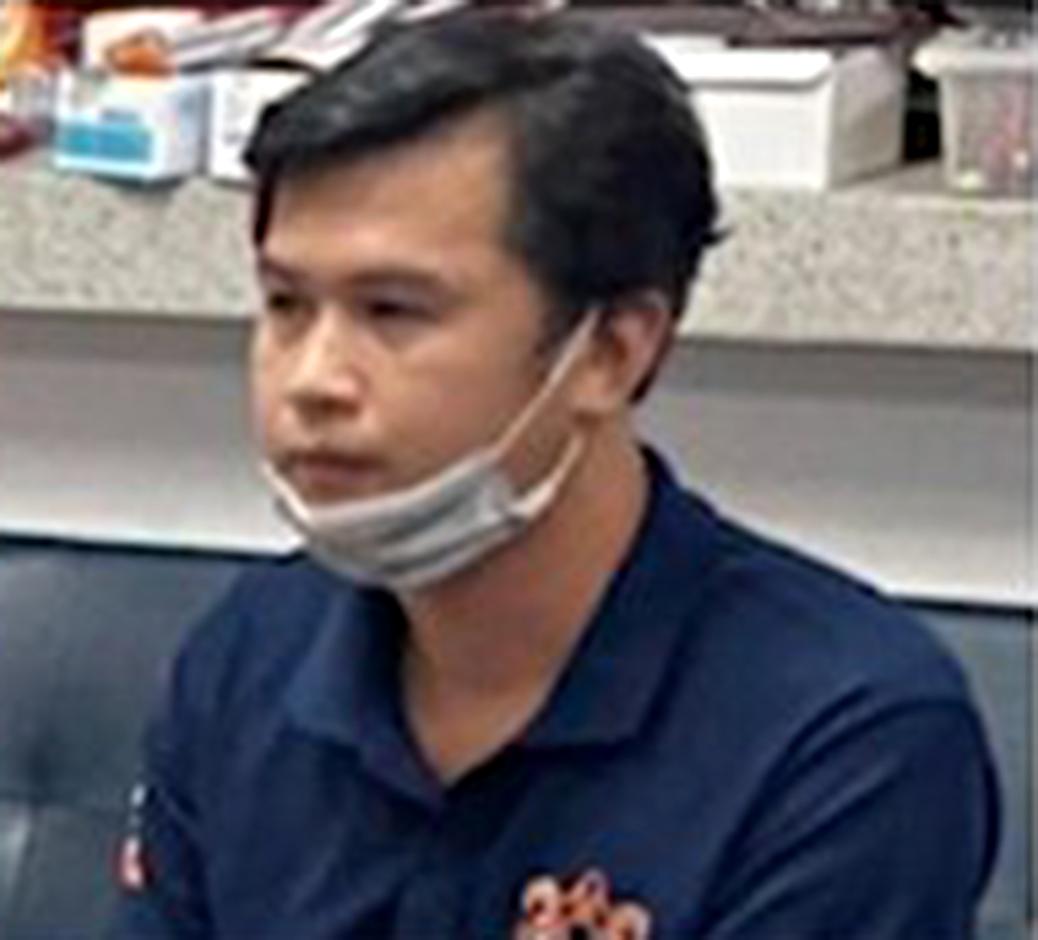 Video footage shows Mr Thee­rayut telling police when they presented their warrant that Mr Chatchai was drunk from early in the evening, as if to explain what happened next. The couple claim that Mr Chatchai insulted them over their meal.

Other reports, however, suggest the beating stemmed from a business deal gone wrong, with police revealing Ms Siriwan has been involved in two recent fraud cases.

CCTV footage showed a man punching and kicking Mr Chatchai by a mound of rubbish in the closed soi. A few minutes later, he gets back in his Toyota Revo and drives away.

Ms Kulakarn said she did not like the look of the couple and suspects they hatched a plan to harm him even before they turned up. "The woman wandered in and out of my house like it was her own, which didn't impress me," she said.

Her brother once owned a business making air con machines but it went bust about 10 years ago. After that, she said, he turned to drinking, and asked to move in with her. "I have spoken to the police and they agree that my brother was probably assaulted before he was attacked in that soi," she said.

"My brother is an alcoholic and likes to speak bluntly. However, they still had no right to do what they did. They knew where he lived and could have brought him back; any genuine friend would have done so."

She said assault was too lenient a charge, as she suspects his attackers intended to go further. Since obtaining bail, the suspects had called asking if they could meet for talks.

She turned them down, amid lingering doubts over their motives. "I will talk to you only in court, as you harboured ill intentions from the start," she said, referring to the pair.

According to one TV news outlet, Ms Siriwan admitted travelling with Mr Theerayut to the victim's home. She said Mr Chatchai had invited them to invest in an online business. She claimed the couple had sent him 110,000 baht in four transfers, as insurance for a 3 million baht loan.

On the day of the attack they intended negotiating further over a meal but at the eatery he spoke ill of Mr Theerayut's parents. Her investor friend, a shareholder in a business buying frozen chicken, took offence. Later they drove him to the soi where they sought their revenge. 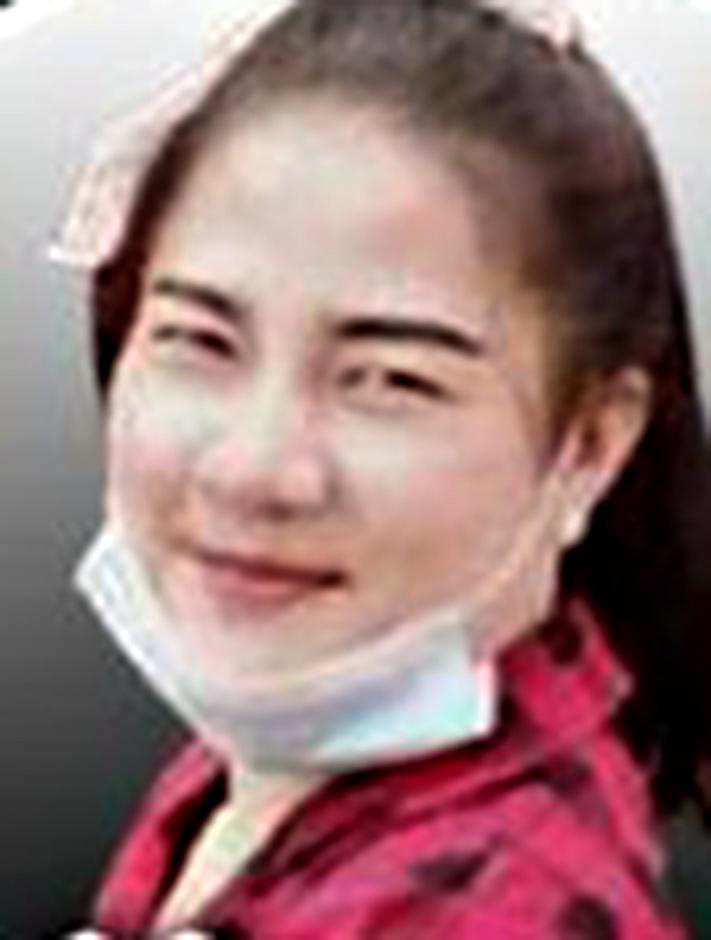 Police said Ms Siriwan faces a court warrant for a fraud case in the Lak Si area early this year. Another fraud case involving a bounced cheque was settled. The case continues.

A southern woman has apologised on behalf of her nephew, charged with killing a police informant, saying she didn't know she had given shelter to a fugitive hired killer. 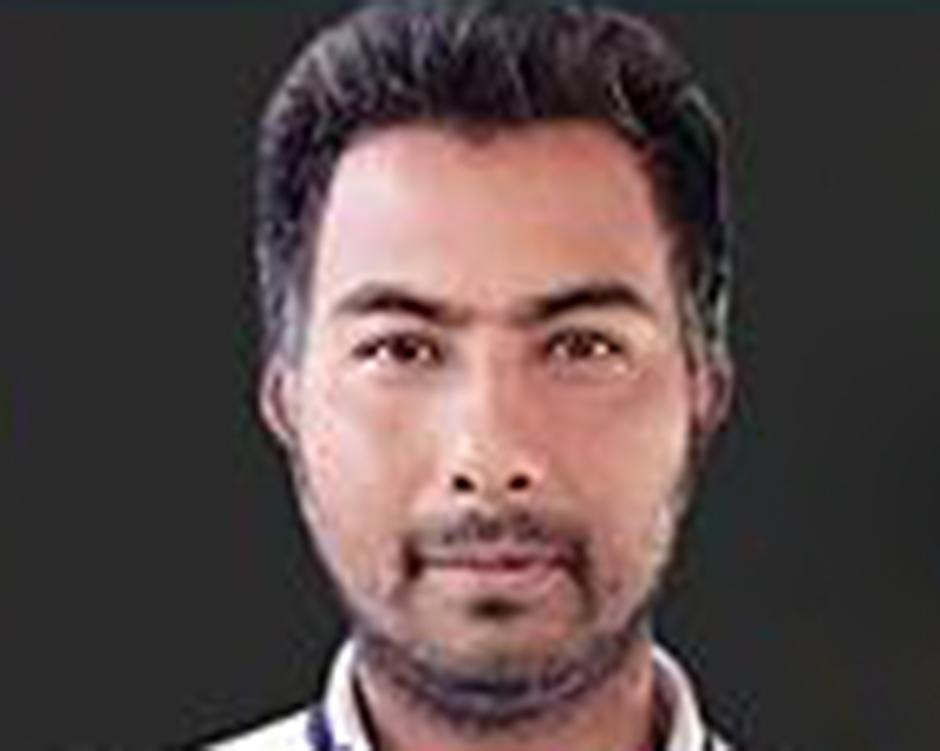 Domsri Sriyokeng, 60, from Cha Uat district in Nakhon Si Thammarat, said her nephew, Chokdee, or Ah Deow (no surname given), turned up at her place on April 28 seeking food and shelter.

A few days later, a joint team of 10 armed Surat Thani police, Crime Suppression Division officers, and Region 8 police burst into her single-storey cement place, nestled in a rubber plantation on a mountain.

They charged him with killing Praman Rakmuang, 43, in front of his wife and child on Oct 31 last year in Surat Thani. Praman was a police informant whose testimony resulted in the conviction of a local drug lord and seizure of a large quantity of drugs merchandise.

Police say Chokdee, a hired killer who has served time, met the drug lord while behind bars. The drugs boss, who was not named in news reports, asked Chokdee to kill Praman out of revenge for having put him in jail, they said.

Ms Domsri said she knew her nephew had problems with the law but didn't know the details. Chokdee, she said, was a good man who loved kids. He would often buy them snacks when he turned up for his visits.

"If someone has died I would like to apologise if people think I was sheltering him...but I honestly didn't know," she told reporters.

Natthaya Chairaksa, 33, Praman's widow, said the attack took place close to Wat Bo Nam Phut in Khiri Rat Nikhom district, Samut Prakan. She, her husband and their daughters had been to a merit-making ceremony and were on their way home on two motorcycles. 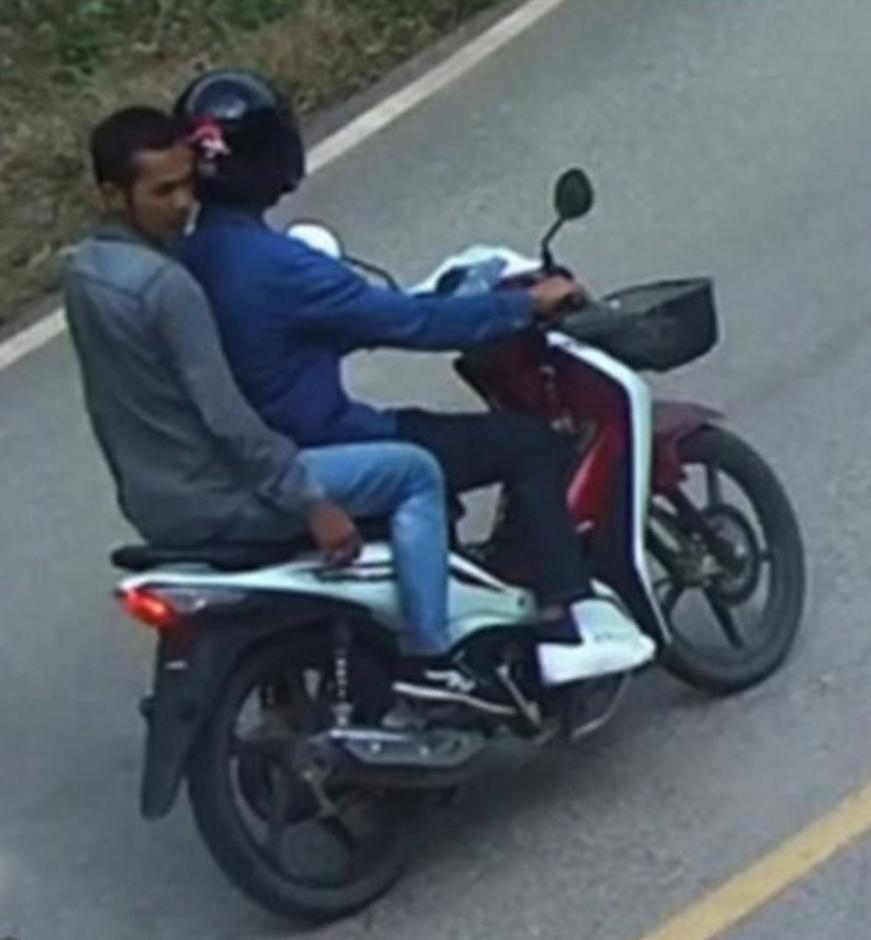 The two men accused of killing a police informant.

The elder of the two girls turned off to her grandmother's place, while she, Praman and the little one carried on on their own bike. CCTV footage released by police shows two men following them from the temple on their own motorcycle. Earlier, CCTV cameras captured them following him on foot at the temple. Neither is wearing any facial covering by way of disguise.

Ms Natthaya recounts the attack: "Two guys on a motorcycle pulled up, and the man sitting behind pulled out a gun and shot Praman three times. Our bike hit the ground, his body still astride the vehicle. My daughter and I spilled off the bike. I told my daughter to run while I called the police.

"It was just too cruel, as he was a good man. We have struggled since, as Praman was the main breadwinner," she added.

Police say Chokdee admitted being at the scene, but denied pulling the trigger. His accomplice driving the motorcycle was still at large.

A convicted bag snatcher says he was forced to go back to his offending ways after failing to make his vehicle repair business work. 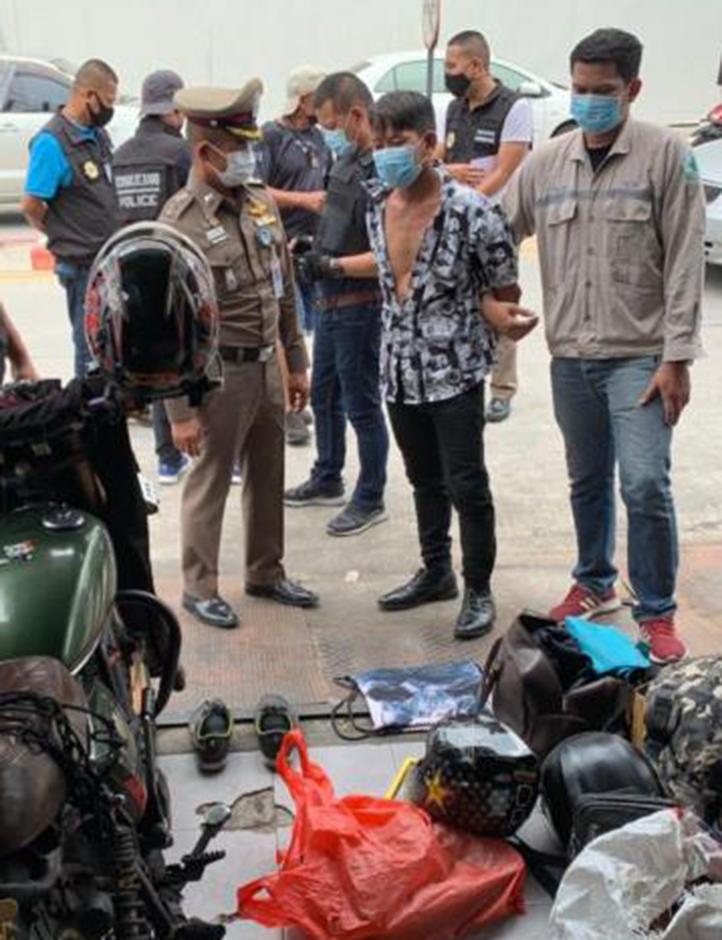 Suthep Sonhom, 47, arrested for theft on April 30, admits snatching victims' bags at least 10 times since the start of the year. Police reckon his offending spree actually accounts for at least 50 such robberies, in Bangkok, Nonthaburi, and Pathum Thani. He sneaks up on his victims from behind and snatches their bags before making off on his motorcycle.

The veteran thief said he chooses victims who are walking or cycling, and keeps cash and any valuables. He tosses their phones as he knows they can be traced.

Suthep came clean after Metropolitan Police Division 2 and Don Muang police nabbed him at his motorcycle repair shop in Pathum Thani. The arrest was spurred by a robbery in Don Muang on April 26 after the victim, teacher Watcharaporn Wiriyanankul, complained.

The Wat Tian Tawai school teacher said the thief grabbed her bag containing 6,000 baht, a phone and other valuables while she was buying food from in front of a streetside curry outlet. He took off down Soi Nawong Pracha Phatthana 19, heading towards Wat Nawong. The victim said she gave chase but wasn't fast enough.

Police say CCTV footage on the escape route led them to Suthep. When they approached his motorcycle repair shop in Talad Thai Somboon market of Pathum Thani's Klong Luang district, Suthep tried to flee but was caught. They found him with a handful of shoulder bags and backpacks, two crash helmets, and 5,470 baht in cash.

The cash, they believe, belonged to an elderly victim whose bag he took that morning in Samakee Road, Pak Kret. The 70-year-old woman, whose bag contained 5,470 baht and eight lottery tickets, fell on her front, broke a tooth, and was admitted to Nonthawet hospital.

The day before, Suthep said, he snatched bags in Sai Mai, Khu Khot, and Pak Kret.

Don Muang police say they caught Suthep earlier, in 2014, for bag snatching. He was jailed for two years and eight months. Upon his release three years ago he opened a motorcycle repair shop, but when it struggled financially turned to his old trade of thieving to help make ends meet.

Police say they are expecting to hear from more victims as word gets out of his arrest. Suthep apologised for his offending, but said he faced rental expenses of 15,000 baht a month at his shophouse, on top of supplies.