Leave nothing to chance

To help youngsters learn about sexual harassment, four girls from Satri Wat Absornsawan School have created a fun board game to teach students how to safely handle dangerous situations

Ploykanok Thubthong, 17, was worried about walking past a house on her way home because an old man living there was a serial public masturbator who targeted schoolgirls. Meanwhile, Chonthicha Wirat, 17, stopped going to a mall after an uncomfortable experience of being stared at by a male stranger.

Even though Ploykanok and Chonthicha experienced sexual harassment which led them to feel anxious and insecure, they did not know much about the issue until they decided to participate in the competition "Games And Learning 2021", organised by Banpu Pcl and Thammasat University (TU). The competition invited 14 student teams to create board game prototypes that tackle 14 social issues.

Ploykanok and Chonthicha teamed up with their classmates Tippawadee Inthanon, 17, and Suvaree Ngampunja, 18, at Satri Wat Absornsawan School to create the board game Escape From Danger, or E.F.D., to tackle sexual harassment. Since Ploykanok and Chonthicha experienced sexual harassment on their way home, Escape From Danger portrays students' journeys after school.

Three to six male or female players can play together. Each player has to roll two dice and take turns to "walk" on the board. In the game, a player will encounter situations inspired by 30 real cases in which they have to figure out how to handle his/her and other players' situations by using one of six reaction cards -- ignore, escape, shout, report, trick or warn. A player also receives "items cards" which can help them solve a situation easily with a spray, a whistle, an electrical self-defence device, a bag, an umbrella and a mobile phone. 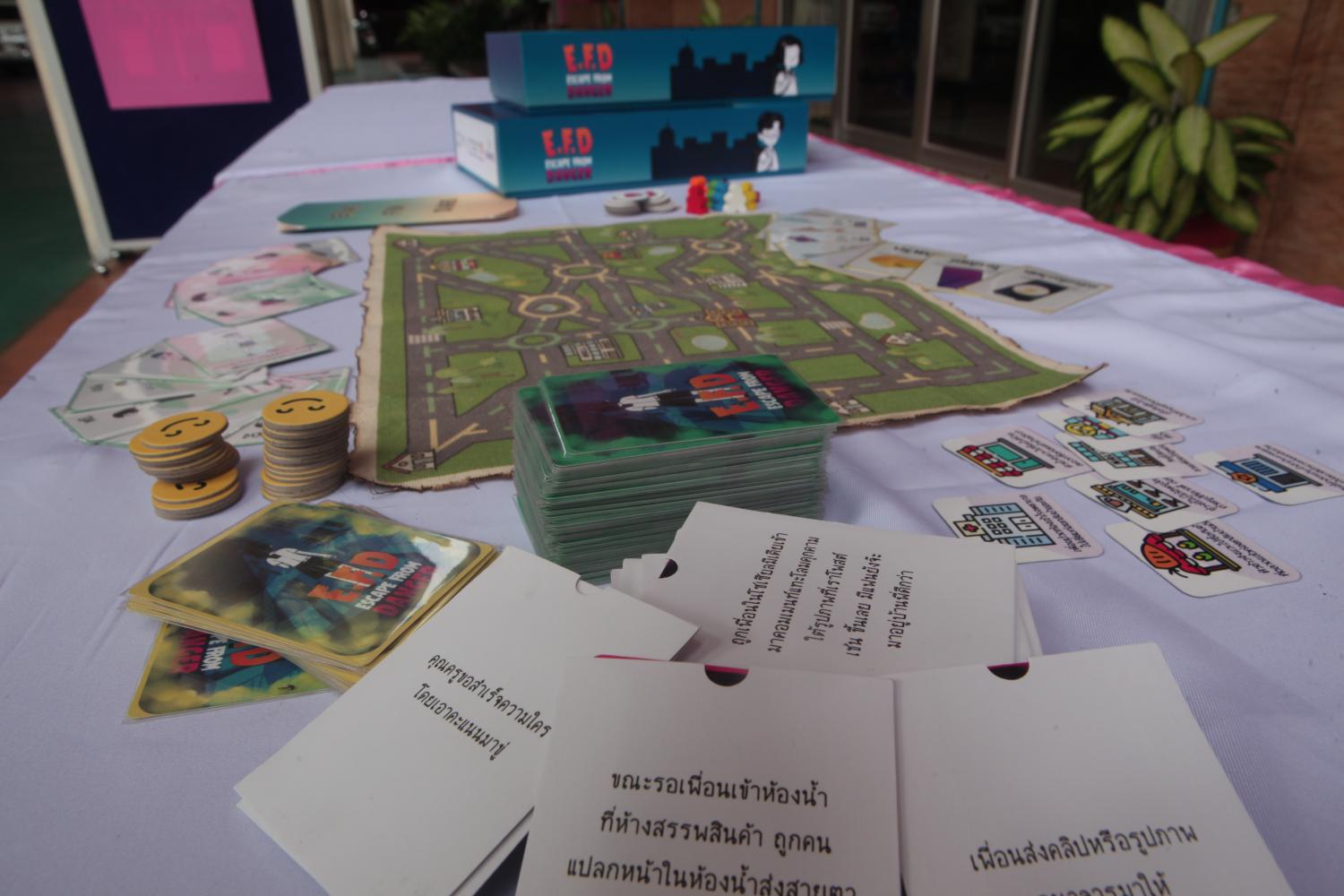 Patcharee Maisuk, chief of the Rights Protections Department at the Friend of Women Foundation (FOW) explained that sexual harassment is not limited to only physical advances.

"Sexual harassment is any unwelcome sexual behaviour and that includes verbal conduct such as sexual comments, jokes and innuendoes and non-verbal conduct such as lewd or suggestive gesturing and physical contact. Many minors are not aware that inappropriate sexual behaviour is sexual harassment because some aggressors do not make it obvious. They may use vulgar language or naturally touch or hold an adolescent," explained Patcharee.

According to a 2017 survey of about 1,600 public-transportation passengers by the Safe Cities for Women Network, one in three people said they experience sexual harassment. Women accounted for around 45% of respondents, followed by LGBTIs and lastly men.

The unwelcome conduct that victims experienced most was looking under skirts or staring at breasts (18.8%). Touching, leaning and cornering victims came in second (15.4%), followed by whistling (13.9%) and uninvited or unwanted flirting was fourth (13.1%).

At WMP, the girls also learned about statistics regarding sexual harassment and gathered more information.

"The WMP staff let us see files of sexual harassment cases and how each was dealt with. At CPCR, we learned that children need to learn about their body rights and how their private body parts are not allowed to be touched by others, except their parents," said Ploykanok. 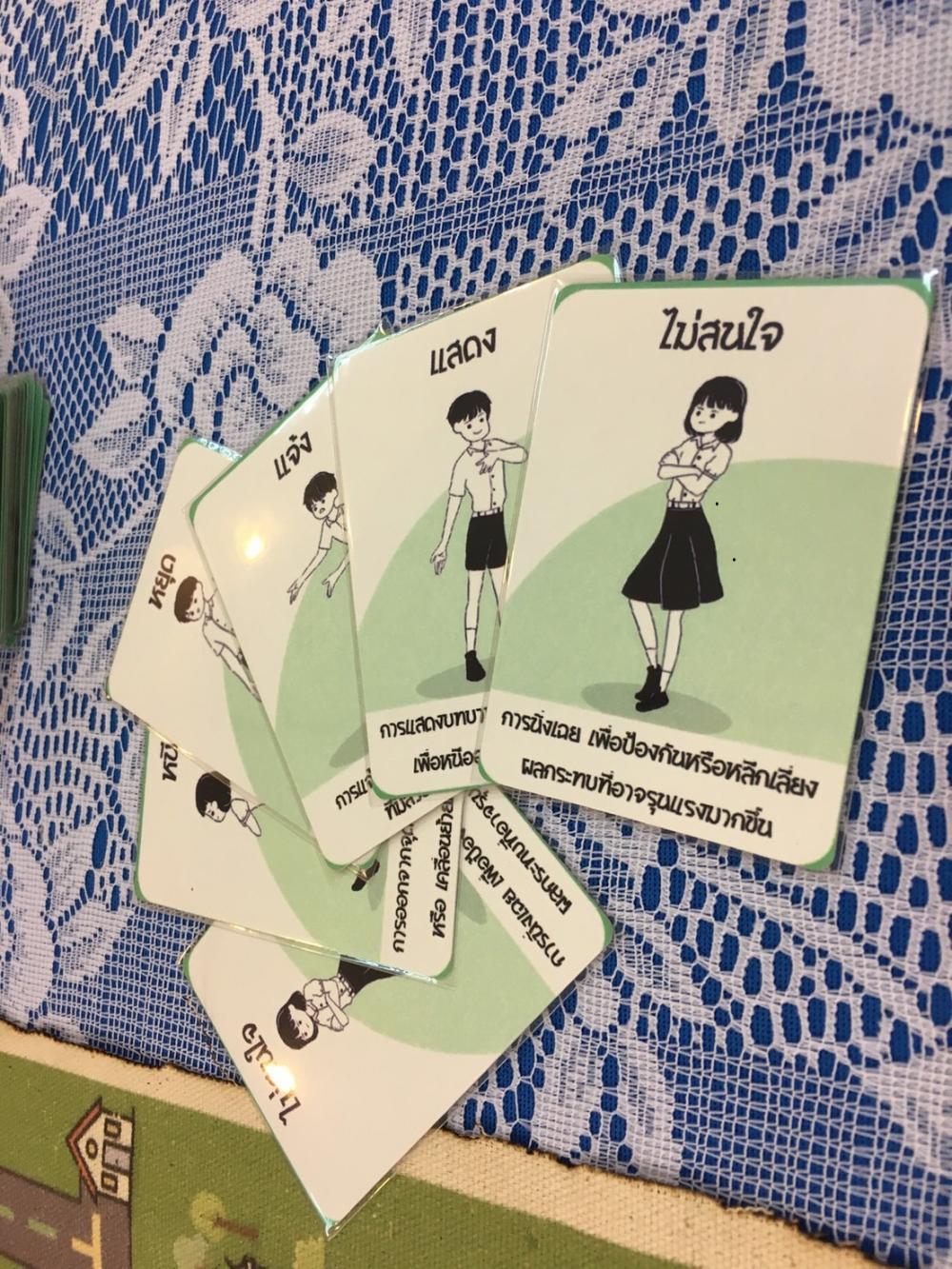 A player has to react to sexual harassment with one of six reaction cards — ignore, escape, shout, report, trick or warn. (Photo: Suwitcha Chaiyong)

Patcharee said that children should learn about their body rights at a very early age.

"Children who understand their body rights can protect themselves from being harassed because they will refuse to let someone touch them or immediately inform their parents if they are harassed. Young people must learn how to say no and avoid potentially risky situations. For example, girls must stay away from their fathers and/or their friends when they drink," she explained.

On the back of a card for each case, there are solutions from the foundations and answers from the questionnaire.

"The solution on the card is what we think is a safe way to handle that situation. For instance, if a student is teased by a motorcycle taxi driver, the solution is to either ignore it or report it to the authorities. Motorcyclists usually stay in a group, so a student should not argue with them as it can lead to a risky situation. A student should ignore it and later report the incident to the district office or police officer," explained Ploykanok.

To make E.F.D. as perfect as possible, the girls let people play it several times, listened to the feedback and made changes before finalising it.

"Our first edition was very serious. It was criticised by consultants from TU and Banpu about how it was not fun and engaging, so we made it more competitive. At first, our cards were written in English but many players did not clearly understand the messages, so we changed it to Thai. Some players could not understand the game at first, while some could immediately understand it, so we rewrote situations to make it clearer," explained Suvaree.

After several changes, the girls discovered that players enjoyed the revised version of the game.

"Players have fun playing E.F.D.. Item cards challenge players to analyse the situation carefully because they have to explain why they used a particular item card to fight against an aggressor, such as a bag or an umbrella. Players may use the same item but they may have different ways of using it. Players also have to suggest their ideas for other cases, so there is an interaction between players," Chonthicha said.

The final result of the competition "Games And Learning 2021" will be released next month. In the meantime, the final edition of Escape From Danger will be on the shelves of Satri Wat Absornsawan School's library. The girls hope that the game will help players handle the situation better if they face sexual harassment.

"Before playing E.F.D., a player may not know how to deal with sexual harassment. However, after playing, they will realise that they have choices such as escaping, ignoring or reporting. They will be more observant and aware of usable 'items' around them. If I encounter sexual harassment, I think I now know what to do," said Suvaree.

"Working on E.F.D. made me understand what sexual harassment is and has helped me become more careful about not unconsciously harassing others," Tippawadee added.

At FOW, Patcharee uses jigsaw puzzles to teach female students about sex and gender, and believes E.F.D. is a welcome development.

"The way of teaching and learning in schools should be adjusted to a format that youngsters are interested in. The girls use a game as their medium which is a great method. Students learn about sexual harassment through the game unconsciously. Some young players may not realise that some of their conduct is sexual harassment and E.F.D. educates them to understand what sexual harassment is. Players also get to exchange ideas about what they should do when they experience sexual harassment. This game is a good one. I hope we at FOW will have a chance to try it in the future," said Patcharee. 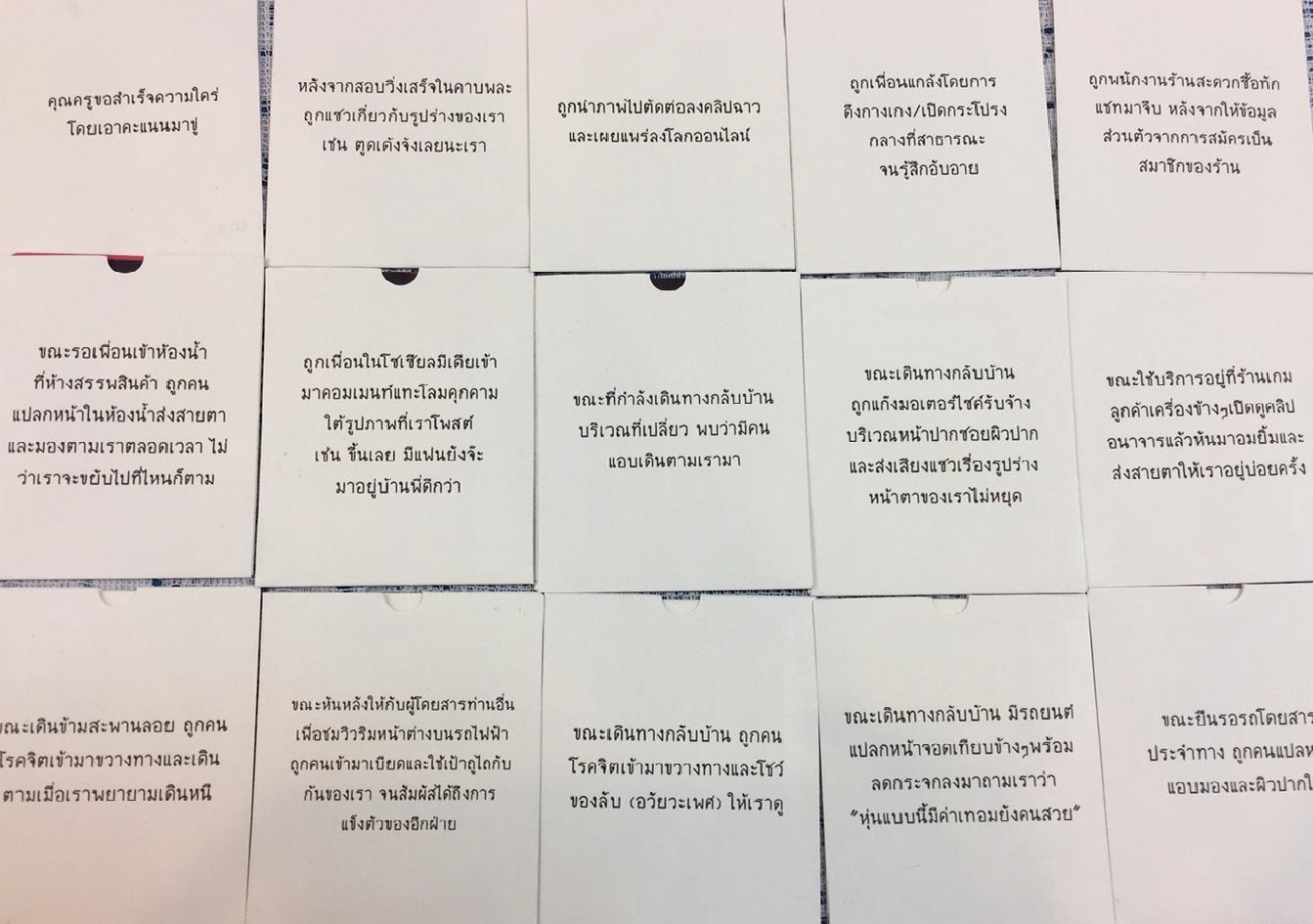 Sexual harassment situations in the game were taken from more than 30 real cases. (Photos: Suwitcha Chaiyong)