Smile, you're on CCTV

A serial car thief who took a car from a Don Muang company after hours claims he was just out for a joyride and had no intention to steal. His "joyride" took him all the way to Nonthaburi where he left it at a temple carpark overnight.

On Sunday, Don Muang police arrested Chainarong Krajangjai, 38, at the temple when he came back for the vehicle. Media images showed him handcuffed and seated next to a Toyota Yaris which he stole from the Nawong Pracha Phatthana Road firm on May 7.

Chainarong, who initially told police he took it for a spin, drove to Wat Koh Paya Jeng in Pak Kret, Nonthaburi. After the owner reported it missing, police followed the route he took via CCTV cameras positioned across the city and lay in wait until his return.

The owner, whose company makes parts for the skytrain and reported the theft early on May 8, said a laptop housing software for the firm's CCTV cameras, a hard disc and a computer monitor were also stolen. "I have been renting the place for a year. It is a company car and I hang the keys where anyone can grab them easily," the owner, who was not named in news reports, told police.

"When I noticed the car had gone that evening I went looking for our CCTV but discovered that had vanished as well. When I asked to look at cameras nearby I saw the thief enter the premises and take the vehicle," he said.

Chainarong, who has a history of stealing cars going back to 2013, left the vehicle at the temple's carpark and took off in a taxi. That, too, was captured on CCTV.

Talking to police after his arrest, Chainarong insisted it was his first offence and occurred almost inadvertently. He said he used to live on the Don Muang company premises some years back when the building was a car repair yard with rented rooms. He found the place empty that night so let himself in.

"I was walking past, saw the gate open and went in for a look," he told police. "I spotted a set of car keys hanging in the carpark and the Toyota. I was surprised to find the key opened the vehicle. I decided to go for a drive and as I was leaving noticed the CCTV camera.

"I worried someone might think I was stealing so decided to take the laptop as well. However, I always meant to return it," he said.

Contrary to Chainarong's claims it was his first offence, police say a check on his record found he was in fact a serial offender, having served lengthy time for car theft in Pak Kret, in 2013, and Don Muang, in 2016.

He spent four years in jail for the 2016 crime and was released in the middle of last year. When asked about the 2016 conviction, Chaina­rong abandoned his claim he was a first-time offender and admitted it was him.

Police, who have once again charged him with car theft, say they believe Chainarong, far from taking the Toyota out for a ride, wanted to sell it on the black market.

He left the vehicle at the temple for safekeeping while he tried to find a buyer. "Otherwise why would he leave in a taxi when he already had the Toyota to get out and about in," one investigator said.

A social media influencer has gone to police after an online lender threatened her young son over a loan taken out by his teacher.

Khangguy Areyasakul is warning Thais about instant loan apps, after she ended up at the centre of a dispute between the lending company and her son's primary school teacher, "B".

She has gone to Phra Khanong police, after the lending company threatened to kill her son if she did not get him to pay up.

The teacher, she said, took out a 8,000 baht loan via an online lending app, and missed payments for eight days.

Khangguy said she knew nothing about the loan until the company behind the app called and demanded she arrange repayment. They had obtained her contact details from his phone.

Khangguy said the lenders obtained a list of B's contacts including her own number via the app. "A man called on May 8, abused me and told me they would kill my young son, Sunny, if I did not contact B and demand he pay up," she said.

"I was stunned when he started abusing and threatening me but regained my composure enough to ask who is B, and what does my son have to do with it," she said.

"What are you, stupid as well as being a liar," the caller replied. B, he said, was her son's form teacher, and he had an outstanding balance of 3,500 baht. "We know where your son goes to school. If we don't get out money he will die," the man said.

If B failed to be persuaded, they were just as happy for her to pay on his behalf. The caller, she said, claimed B had listed her as a referee whom the lending company could contact in the event he failed to pay.

"I was scared as my son is just five years old, so I pretended I was willing to pay. They gave me an account number where I could send the money, and the account owner's name, which I have now handed over to police," Khangguy said.

"Once I found out what I needed, I hung up and contacted the school. B called and apologised, though he insists he did not give my name as a referee." He had merely listed her in his contacts as "Sunny's mum", along with her number.

Khangguy said she felt sorry for the teacher, who since the saga came to light has been hauled over the coals by the school head.

"The app gains access to contact numbers itself, as borrowers agree to share their personal details as a condition for being granted the loan," she said.

Khangguy, who posted about the encounter on FB, claims she gave the loan shark caller a warning of her own.

"Before you threaten people you should do a little homework and find out if the people you are calling can do you any harm. Look up my details on the internet and you'll find out for yourself," she told him.

She claims the man later called back to apologise when he realised she was a public figure, but she told him the damage was done.

She had looked into instant loan apps since the drama unfolded and would like to warn Thais to be careful when borrowing from them.

Responding to her FB post, Thais shared similar encounters they had had with unscrupulous online lenders. Nuy Jindasri, who took out an online loan and missed a repayment, said the company called people on his phone contacts list to chase up the money. "My contacts called me back and abused me for giving their names as referees," Nuy wrote.

Prakarn Alpha, meanwhile, said a youngster he knows had borrowed from an app and given Prakarn's number in the event he could not be reached.

"Someone called me, asking me to arrange repayment. They didn't abuse or threaten me. But when I told the caller about my family background -- we're from the police -- they didn't bother me again." Police are looking into Khangguy's complaint.

Ghosts get thirsty, too

A food delivery guy says he was surprised to get an order from a cemetery in Chai Nat. 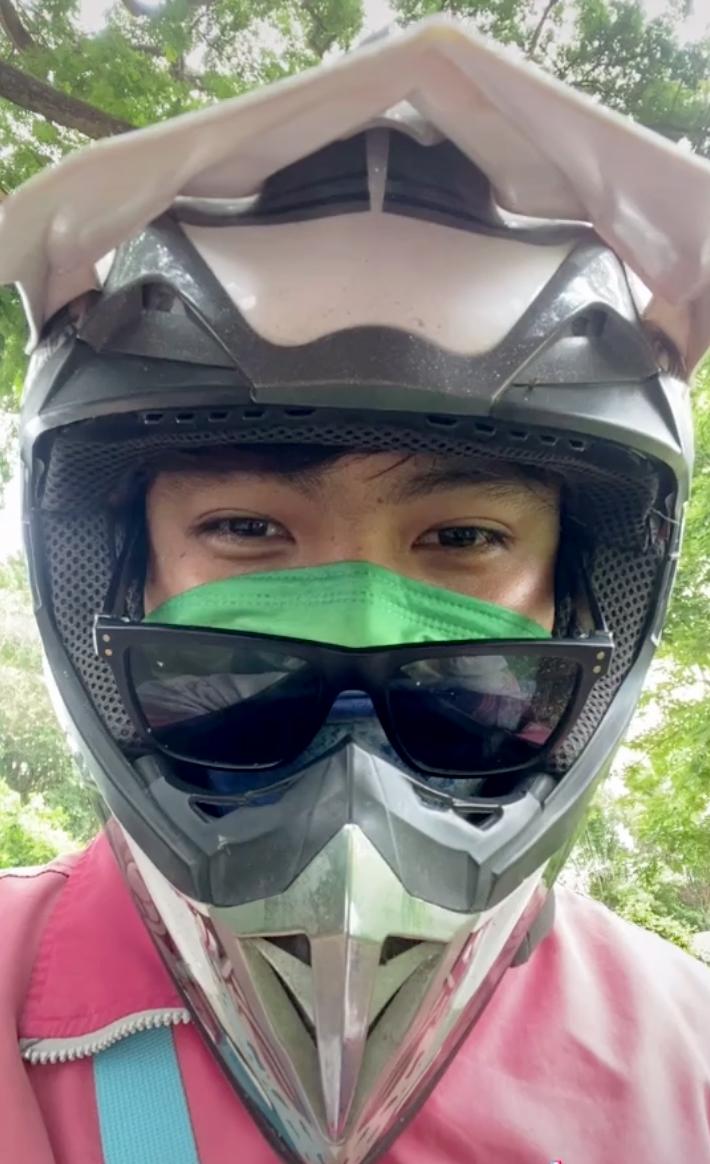 Food Panda rider, Boy Chainat or Sittichai "Boy" Muangnil, last week shared a brief clip on TikTok of him taking a delivery of two bottles of fizzy drink to a location overlooking an overgrown cemetery which a customer had pinned on a GPS map.

When he arrived at the cemetery behind Wat Khao Tha Phra in Muang district he looked puzzled and called the customer, who did not answer. This hardened Boy's suspicions that he had fallen victim to a prank -- that, or GPS had led him to the wrong spot. "So, which grave is it," he muses to his phone camera. "Please put up your hand."

He asked whether he had been tricked into making the delivery by a local ghost. The post was widely shared in the media. "I don't believe in ghosts but am still pleased I was called there in the daytime and not the middle of the night," he told reporters.

The mystery unravelled when the customer eventually called back. She said she had pinned the location wrongly, and her home, where she wanted him to make the delivery, was actually another 500m away. He found the customer and delivered his goods. 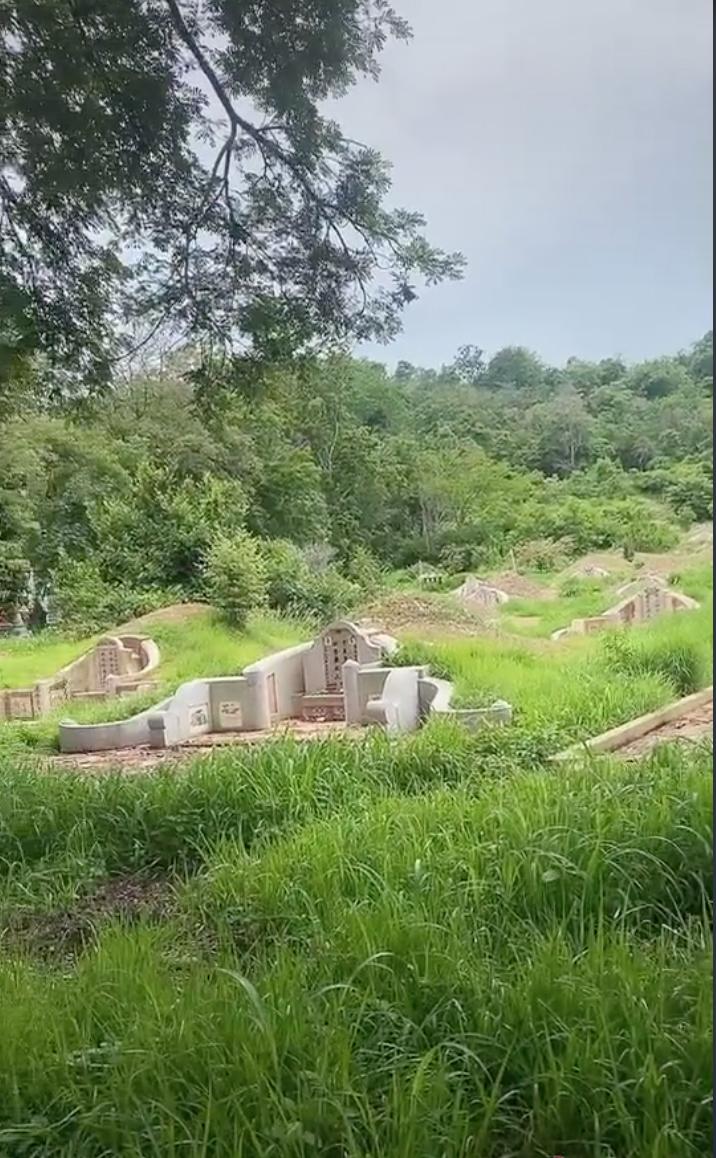 The overgrown cemetery where he took the order.