When working from home and self-isolation is not an option, Oh* said the rise in Covid-19 infection numbers among her fellow police officers made her anxious and uneasy in the company of not just outsiders but also her colleagues.

"As the Covid-19 cases continue to rise unabated, I cannot help but feel a morbid fear of whether the people that come in contact with me on a daily basis have contracted the disease," said Oh, a senior officer attached to the Thailand Internet Crime Against Children Bureau.

Much of Oh's work entails catching hardcore criminals, and so the obvious concern for her is whether they are infected with the novel coronavirus. She said it is difficult to shake off the fear.

"The large number in quarantine has impacted our police force, which in normal circumstances is already facing problems with a lack of staff to service the public," she said.

Catching criminals in PPE gear and devising strategic plans to break up drug rings in the city via Zoom meetings have become the new normal for the Royal Thai Police (RTP) ever since hundreds of officers were found to have contracted Covid-19 during the latest infection wave. As Bangkok had become the epicentre of the latest spread, the bulk of infection cases among police officers was found in the capital. Stats show that from the metropolitan police bureaus alone, there were 312 infected, 154 hospitalised and 157 recovered so far. 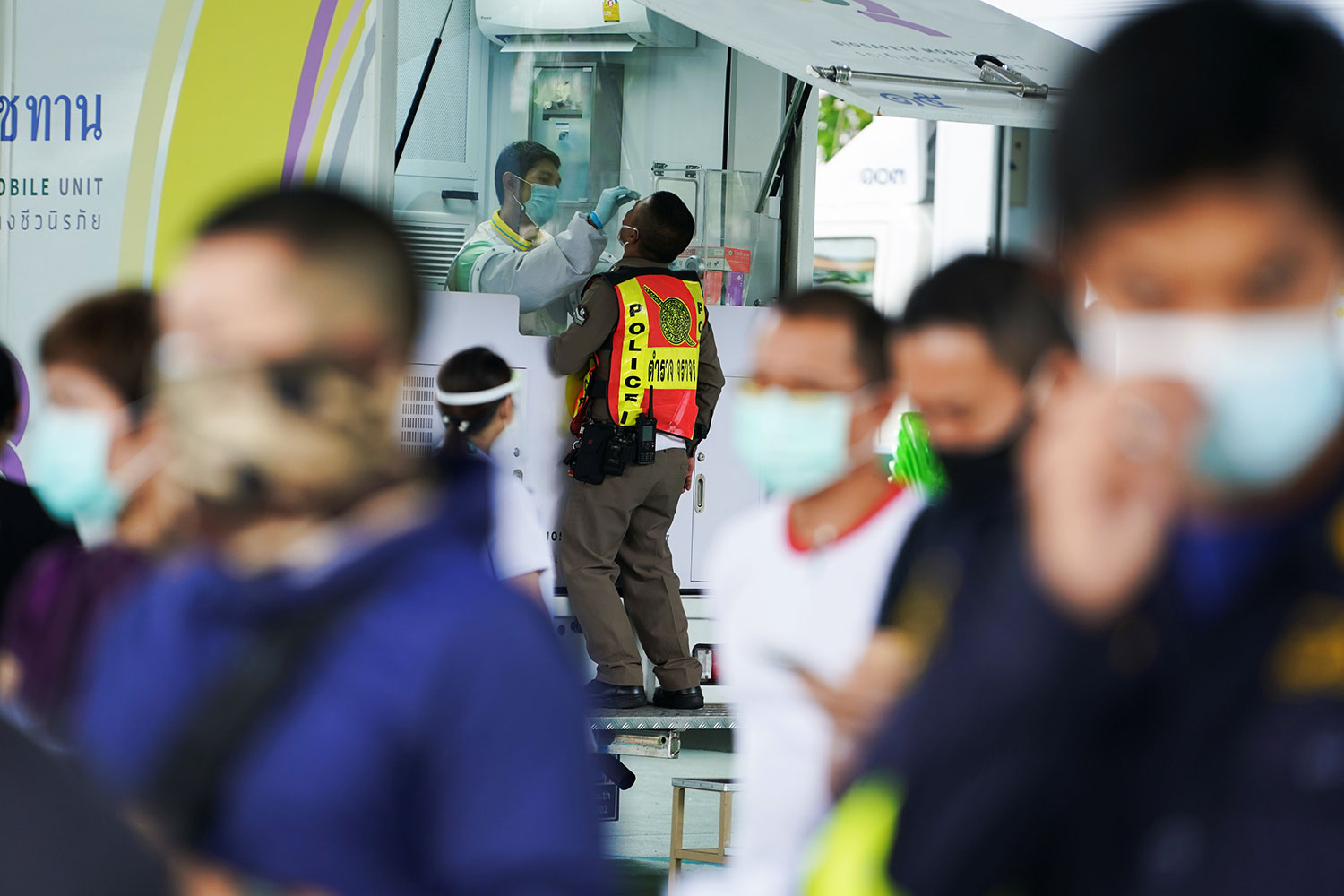 A police officer is tested for Covid-19 in Bangkok. (Photo: REUTERS/Athit Perawongmetha)

Spokesperson for the RTP Pol Maj Gen Yingyos Thepjumnong said 975 of 200,000 police officers in the country had contracted Covid-19. Of this, 745 had recovered, 224 are in quarantine and six deaths had occurred.

Maj Gen Yingyos attributed the spread of the virus to negligence by certain police officers in following Covid-19 preventive measures, thus spreading it to their colleagues and family before being tested for it.

"If we compare the number of officers that are incapacitated due to Covid-19 to the ones remaining at our disposal, you will find that we have not reached the stage where the performance of the police force is compromised due to a lack of officers on duty," he said.

"Nevertheless, Pol Gen Suwat Jangyodsuk [national police chief] has authorised that police stations that find themselves lacking staff due to the impact of Covid-19 to have replacements brought in from other units that have not been affected as much. All this in order to better service the public, especially during the pandemic, which has created its own set of challenges for everyone. Until now we haven't seen a need arise to use this order."

Infected police officers who are either asymptomatic or required to be quarantined are also offered the option of using government managed vacationing facilities as a hospital.

Getting police officers vaccinated has also been prioritised, he said, as is their well-being.

"Pol Gen Suwat has also ordered all department heads to personally attend to any subordinate who has been found to have contracted the virus. He felt strongly to implement this order after it was found that a junior police officer who tested positive for Covid-19 waited for many days in his room to have an ambulance take him to the hospital," said Maj Gen Yingyos.

"We are doing everything in our power to see that each officer is well looked after during this pandemic. To the best of our ability we have provided them with safety gear, masks, gloves, hand sanitisers, and in some instances PPE suits, to assure that they do not get infected while in the line of duty."

The police spokesperson said to bolster public faith in law enforcement and improve the standard of policing in Bangkok, Pol Gen Suwat had ordered prior to the public health crisis the installation of over 9,100 CCTV cameras across the capital, which is under his Police CCTV project.

Already in existence are around 53,200 cameras that belong to Bangkok Metropolitan Administration (BMA). However, out of this number, 1,051 cameras were recently discovered to be inoperable, while an additional 2,000 were offline.

The Police CCTV project will enable officers work more efficiently as it will be under the jurisdiction of law enforcement.

"The present cameras in Bangkok belong to the BMA so when we need footage we have to ask their permission to access records, a procedure that can be time consuming," said Maj Gen Yingyos.

"When it is our own project, we get to pick the angles and areas in which to mount these devices across the city," said Maj Gen Yingyos.

"To achieve maximum advantage from these cameras we recruited veteran police investigators, with sound knowledge of the various crime-prone areas in the city, to advise us on the locations and the direction they should be pointing. They are at the top of their game, so their know-how is priceless, helping us in turn to capture the best footage of a crime scene and potential routes perpetrators often take to flee. All of this can be done remotely, so it is very timely."

He reiterated that the Police CCTV project is an ongoing endeavour, a work in progress, which has been up and running since the new year.

Feedback from the public has been positive as a number of cases have benefited from the evidence from these cameras.

"We haven't promoted this much in the media for fear that criminals would be more vigilant in covering their tracks if they had foreknowledge of these CCTV cameras. However, we would like to share this information with the public especially during the pandemic in the hope that they will feel secure in knowing that via these cameras we are monitoring their communities to keep it safe," said Maj Gen Yingyos.

"The pandemic has made social distancing the new normal, however, this technology has helped us to fill the gap that this has been left behind."

Before the pandemic, Oh said the biggest worry for an arresting officer in a sting operation was whether the perpetrators were armed. However, today it is not just that but also if the individuals are infected.

While wearing PPE gear when making arrests is an option, Oh believes it will take time for this to catch up with the masses and become their modus operandi.

"We are working on a platform whereby the public can go online to report their grievances to us instead of coming to report it at the police station," she said. "This will definitely be a step in the right direction to practice social distancing and the new normal in police circles."

* Not her real name.