A rogue taxi driver has been nabbed after a string of incidents including shaking down city drivers for cash, and ripping the face mask from an unsuspecting pedestrian.

Phra Khanong and Metropolitan 5 Division police on Monday nabbed Nana Meebotsom, 47, after a string of complaints about his oddball behaviour. They were sparked by an incident at a bus stop below BTS On Nut on June 9 when he ripped the mask from Manita Jitbenjakul, 25.

She said she was checking her phone as she waited for a bus when Mr Nana stopped his taxi, walked over and tore the mask from her face, leaving a scratch mark on her neck. He told police he wanted to know if he knew her beneath the mask, as she looked familiar. She denies they have ever met. 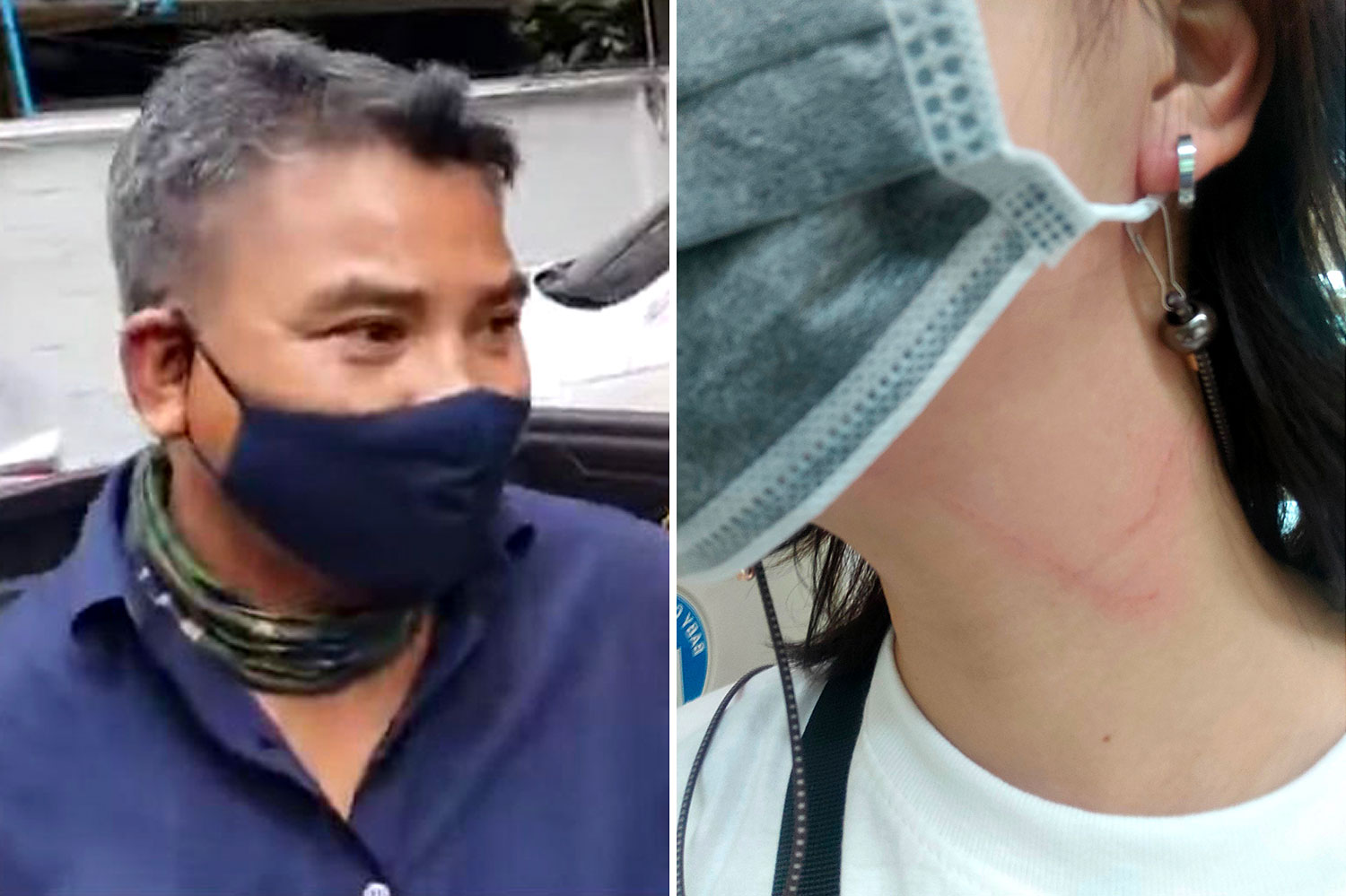 She exclaimed in shock but recovered in time to take a picture of his car's number plate. Ms Manita said he looked back at her as he was returning to his cab but did not utter a word. Commuters at the bus stop urged her to lay a complaint.

Ms Manita, who posted about the saga on Facebook, alerted Phra Khanong police. Other victims of his threatening behaviour also came forward, with two motorists saying he staged accidents to demand money from them, and one student accusing him of taking her to a short-stay motel. Once again, he claimed they had met before.

Songkran Intasurat, 37, said his run-in with Mr Nana occurred in Lat Pla Khao soi 9 of Bang Khen district on June 13. He had just left Wat Trai Rattanaram when Mr Nana's taxi cut in front of him. Mr Nana, clutching a piece of wood behind his back, approached Mr Songkran's window and demanded he leave the vehicle.

Mr Songkran, who filmed the incident on his phone, said Mr Nana accused him of cutting in front of him. He apologised and offered the man a wai in the hope he would be deterred, but refused to get out.

Mr Nana changed tack, claiming Mr Songkran had once assaulted him and demanded he pay 1,000 baht. When he refused, he asked for whatever money he was carrying. Happily for Mr Songkran, a young motorist approached the vehicle asking Mr Nana to move his taxi as it was causing traffic to pile up. As Mr Nana returned to his cab, he turned to take a picture of Mr Songkran's vehicle before driving away. Mr Songkran alerted Khok Kham police.

Student Rin, 21 (assumed name), said her encounter with Mr Nana occurred on June 7 when she got into his taxi in front of Dhurakij Pundit University, heading for a relative's place in Bang Phlat. She was playing on her phone and didn't watch where they were going. Eventually she looked up to find he had taken her to a short-stay motel in soi Charan Sanitwong 40/1. "He turned around and asked if I remembered him. I insisted we didn't know each other," she said.

She quickly left the cab. When she asked why he had taken her there, he denied having bad intent, saying he merely wanted to get to know her better. He told her to get back in, and offered to drop her at the mouth of soi. He made many roundabout trips before they passed her relative's place and she asked to be let out. She fled the vehicle, and as she was running away heard him say, "We'll meet again". She took a picture of his taxi and complained to Bowon Mongkol police.

After his arrest, Pha Khanong police charged Mr Nanas with assault in relation to the mask case and appealed to other victims to come forward. Pol Col Wachirakorn Wongboon, the station head, said he was a repeat offender and had harassed motorists in many parts of the city.

Asked about the mask-ripping case, Mr Nana told reporters he did not mean the young woman any harm. He struck himself four times in the face by way of atoning for his crime. He also denied shaking down motorists for money. Quoting Phra Khanong police, Khao Sod newspaper said he has twice been jailed for theft. The first time was in 2016, in Pathum Thani, when he was jailed for three months. The second time was in Bangkok in 2019, when he was jailed for two years, released on Feb 5. The case continues.

A Buri Ram man says he has no hard feelings after his family mistakenly identified his body in a fatal traffic accident and staged a funeral for him, only for him to walk in unawares the same day. 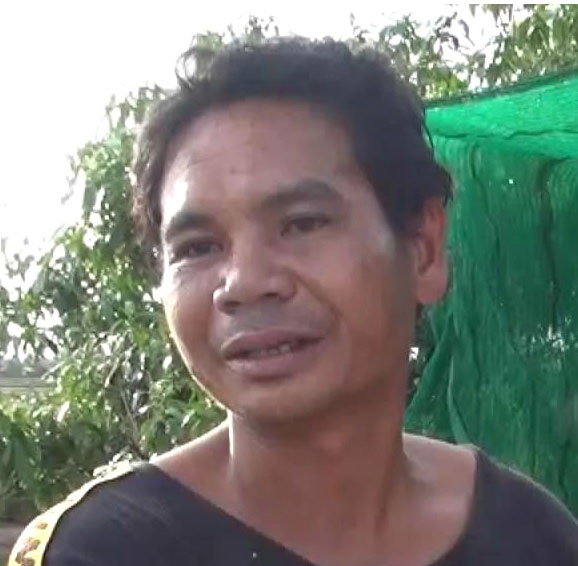 Sangad "Lan" Saiwan, 38, from Sa Bua of Khaen Dong district, said he had been away from home for two days when his family received word of a nearby traffic fatality on Khaen Dong-Satuek Road on June 1. A 12-wheeler truck ran over a motorcyclist, leaving the body so disfigured it was hard to make out his identity.

His father, Pairat, 61, aware his son had gone missing, inspected the body and thought he recognised a tattoo on the victim's arm. He identified the body as that of his son and police arranged with rescue workers to have the body delivered to his home for funeral rites. The next day the village headman broadcast a message over the loudspeaker about Mr Pairat's loss, and locals turned up to help him prepare food and arrange the funeral.

Mr Sangad, a young man fond of his drink, had been visiting friends in Ban Yang Noi to help them tap rubber but did not tell anyone when he left home. When he turned up about midday the day after the accident, he saw a tent outside his house and other funeral arrangements and assumed someone had died.

However, when he walked in and saw his photograph on top of the coffin and a sign giving his birth date and date of death, Mr Sangad, who also turned up with a tow cart full of grass to feed the family buffalo, asked shocked onlookers: "So have I died then?"

After recovering from their initial shock of discovering Mr Sangad was not in fact dead, the next puzzle was finding out who was lying in the coffin. In another headache, his father spent 40,000 baht of money drawn down from a family funeral fund which he would now have to return.

They found the body belonged to Wutthichai "Ood" Poonwong, 35, who lives three villages away. They sent the body to hospital, where Ood's elder sister, Prathom Poonwong, identified it as that of her brother from scars on his body and clothes.

She said she had heard about the accident the night before but didn't go to look because she assumed the victim must be someone else. Later she heard Ood did not return home that night, and that Mr Pairat's family had since found it was not their son who died. After having doubts she contacted authorities.

Reporters travelled to the family home, where Ood's funeral, the second one the body had attended in two days, was underway. Ms Prathom said she did not hold the mix-up against anyone, but does want the 12-wheeler driver who ran over her brother to take responsibility. Police are viewing CCTV footage after he fled the scene of the accident.

Village headman Thawil Seegnam, 51, said the incident should serve as a warning that a better standard of proof is needed when a family goes to identify a body.

A group of Nonthaburi teens is in shock after one of their mates drowned in front of their eyes, with the terrifying moment recorded on a smartphone.

A clip released to the media showed Wisarut "Dream" Lertjai, 18, an ice-cream delivery boy, jumping with a friend from a temple jetty into the fast-flowing Chao Phraya River. 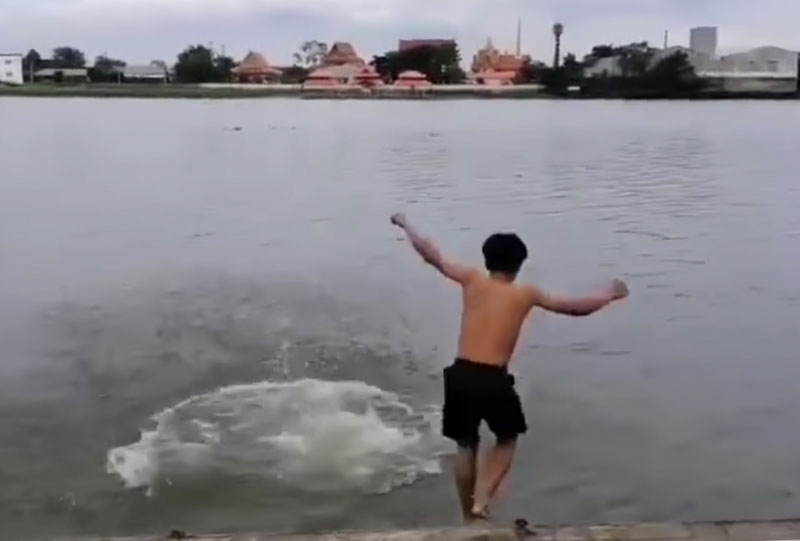 His friend, "Tim" (assumed name) went in first. They had been making merit at a nearby temple when Dream, who could not swim, suggested they take a dip. In the opening scenes, Tim, himself a weak swimmer, tells a reluctant looking Dream that he will help him. However, he warns him not to press his head down in the water.

Tim jumps in, followed by Dream. Dream heads for Tim, who manages to get a "lock" on Dream's body, but they are quickly separated by the flow, and Tim himself gets into trouble. A young woman filming them from the jetty, in front of Wat Tamnak Nuea in Bang Phut, Pak Kret, is heard telling another lad to go to their aid. Tim and Dream had joined four others who were already swimming there.

The teen who swims out to help them, Pongsathorn Plaengsri, 19, said he was able to get hold of Tim and drag him to safety. However, he could not get to Dream in time. Initially Dream is seen thrashing about in the water. Within a matter of 20 seconds, as he drifts further and further away from the group, he has gone.

Tim contacted the village head, who called rescuers. Tim also went to tell Dream's mother that her son was missing. Rescue workers finally found his body about 100m away.

Dream's mother, Sasima Padpherng, 47, said she was in shock. Dream was her only child. The boys had travelled to the river from Wat Saphan Sung in Pak Kret, where they made merit.

Tim said he and Dream had known each other since preschool. Dream had once asked him to teach him how to swim but he never had the chance.

"Normally when I invite him for a swim he turns me down. I don't know what prompted him to swim this time," he said.

Tim said he was shaken over the loss and asked netizens to give him a break. Some said he had abandoned his friend even though he loved Dream and never thought such a thing could happen.