Tradie with a temper

A tradesman who killed a contractor in Taling Chan and who was hunted by police to the upper edge of Chiang Rai has returned to Bangkok to point the finger at two of his workmates as complicit. 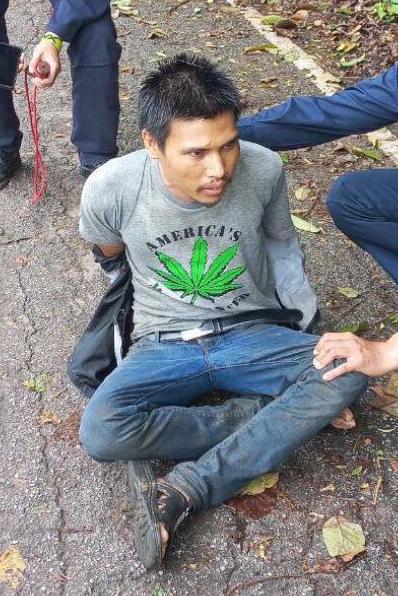 Police on Thursday took tradesman Jawa "Phong" La Hoomerner, 21, back to the scene to re-enact the July 8 crime in which he used the tools of his trade to slay a contractor developing a cafe/bar at a 4 rai residential property in Bang Chueak Nang, Taling Chan. He concealed the body under a house, where it was found on July 17.

The saga started when Jawa and a workmate lured contractor Sittichok "Son" Saroj, 42, from Kanchanaburi, out of bed in the house they shared on July 7 evening for a drink. Mr Jawa and his mates were part of a team working under a man called "Na", who in turn answered to Son. Na and another worker, "Yo", joined them initially for their nightly drinks but later went to bed.

All were living at a house on the property and working on the cafe/bar during the day. The rambling property, according to TV reports, belongs to businessman Suphot Tangvitoontham, chairman of the Color King gem company and owner of the Doi Hom Fha resort in Chiang Rai. 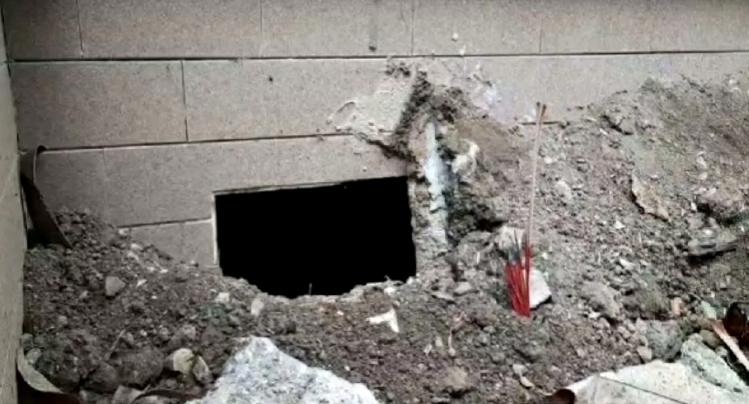 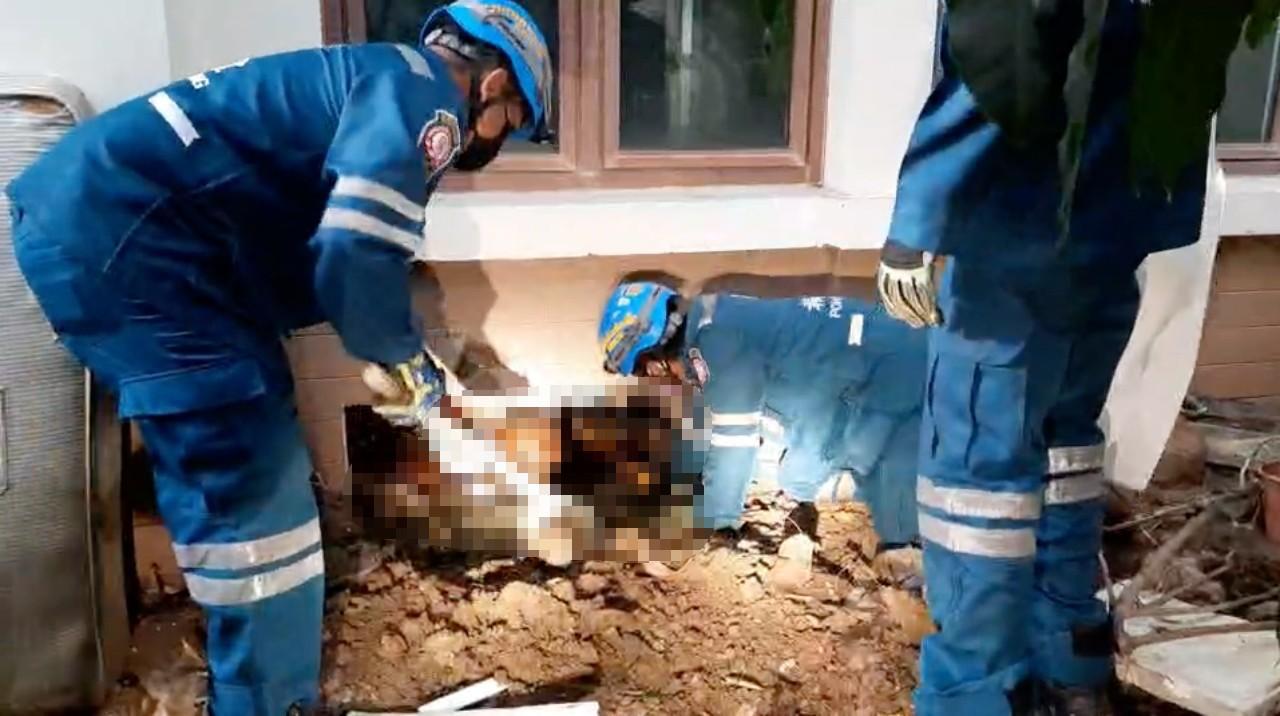 Police drag the body from the hole.

After an argument, supposedly over unpaid wages, Mr Jawa, an electrician by trade, stabbed Son, and as he lay injured beat him with a hammer and hoe. He said his workmates, Songpol "Rung" Taping and Theerawat "Wat" Sukrath, who were in the drinking group, fetched the tools he wielded to kill Son. They also helped him conceal the body.

Mr Jawa said he wrapped the body in a curtain, dragged Son's body outside and stuffed it under a hole by the side of the house. He sealed the hole with cement tiles intended for the cafe fountain.

Jawa also dragged a mattress over the hole to conceal his handiwork. Two days later, the electrician fled for Chiang Rai, leaving his mates to face the rap when Son's family, aided by Bang Sao Thong police, found the body on July 17.

Son hailed originally from Krabi, though he has a wife and family in Kanchanaburi. He would call home to Krabi daily and when he stopped calling his family grew concerned. They knew he worked in Bangkok and travelled there in search of him.

They found nothing at the property the first time they visited on July 15, though noticed a bad smell. They consulted a fortune teller the next day, who told them roughly where to find the body. The family asked police back a second time, and after seeing flies buzzing around the mattress, removed it. Media images showed police breaking the cement with a hoe, digging away and finding the body.

Breaking down the crime after his arrest, Mr Jawa said he stabbed Son in the head first. While Son was lying prone, Mr Jawa asked Mr Wat to get a hammer from the cafe construction site. He also asked the pair to get the curtain from a bedroom next to his.

Outside, he ordered Mr Rung to get a hoe and start digging a hole so they could ease the body in. Mr Jawa, meanwhile, fetched tiles from a water fountain they were building.

Mr Jawa, a diminutive, quiet figure who has worn a white PPE suit in his public appearances since being nabbed, admitted that while he was preparing to conceal the body, Son was still breathing. Mr Jawa said he hit him again with the hoe before stuffing Son in the hole. Police suspect the contractor might have been buried alive. His workmates, after initially denying involvement, said Mr Jawa forced them to help at knifepoint.

The crime re-enactment sheds gruesome new detail on the murder. Two days after the slaying, Mr Jawa asked for 10,000 baht in unpaid wages from Na and took off to see his family in Chiang Rai. The other two carried on as if nothing had happened. Their wives, who also stay with them in the house where the body was secretly buried, say they noticed nothing odd about their behaviour. 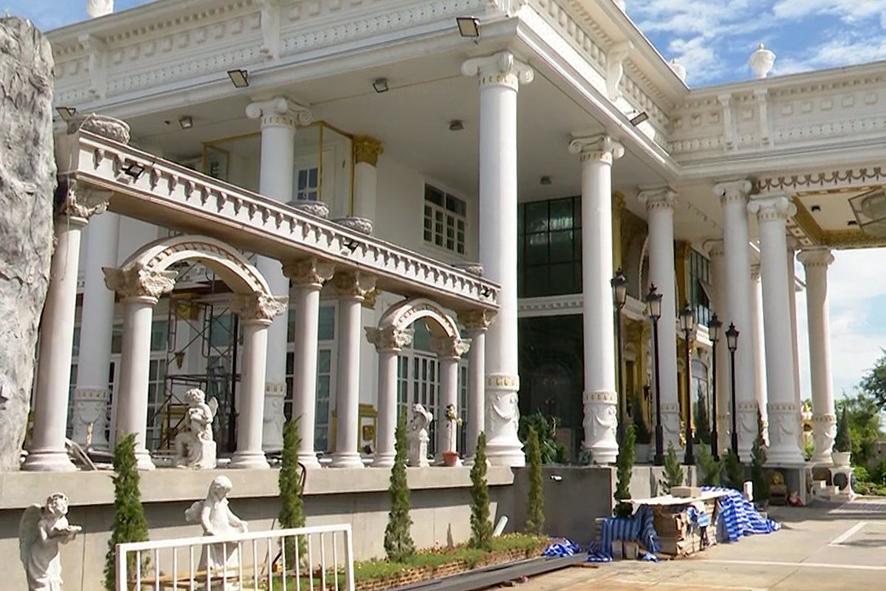 The main house and the cafe. 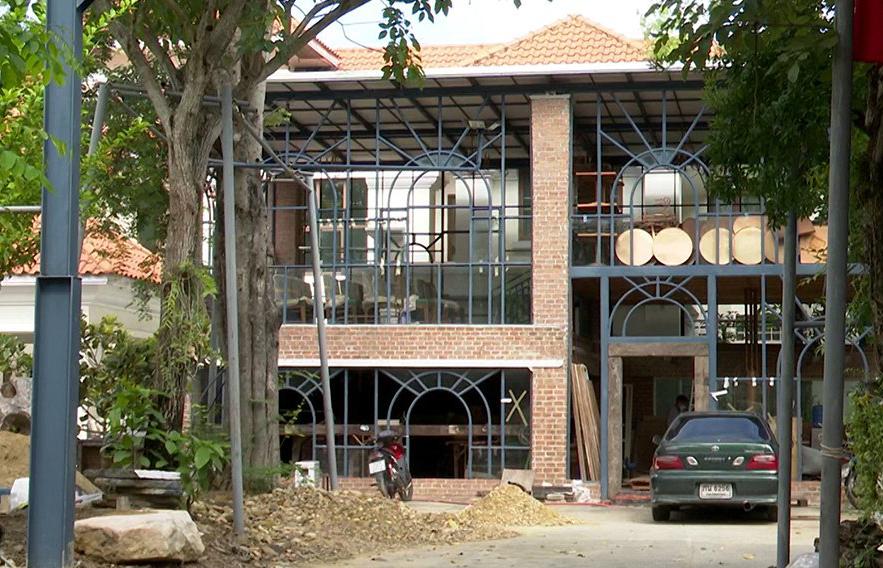 As Mr Jawa was the only one who left, police initially regarded him as the key suspect. A day or so later, however, police decided he was unlikely to have pulled off the murder alone, and charged Mr Rung and Mr Wat with jointly killing Son and helping conceal his body.

Asked why he did it, Mr Jawa said he and Son argued over unpaid wages of about 10,000 baht. This has caused confusion, as contractor Son would pay the wages he received from the property owner to Na, Mr Jawa's team leader.

He did not pay wages directly to tradesmen, though Son had earlier told his mother, Suwadee Petchkaek, that Mr Jawa had borrowed 15,000 baht from him and asked him to deduct it from his wages. "I asked him how he could trust him with that money and we argued," said Ms Suwadee, who believes the three men planned the murder.

The wife of a caretaker said she had seen Son and Mr Jawa mixing cement and laying tiles together, so it is possible that Mr Jawa, even though he was an electrician by trade, had taken on extra work directly from Son and not been paid.

Meanwhile, Mr Jawa's escape to Chiang Rai took him initially to Terd Thai mountain in Mae Fah Luang, where a combined team of 20 soldiers, police and local body staff searched for him with no success.

His younger brother, So, 18, said Mr Jawa called on July 9 to say he was coming home. Two days later he turned up at a village about 3km away with canned food and clothes and went into "Covid isolation" in a forest hut. So gave him his motorcycle to get there. He was to stay there until July 18, before police arrived looking for him.

So took police to the hut, where they found a bamboo bed and clothes line which Mr Jawa had built, but no Mr Jawa. The search then moved to Ban Mong Paed Lang village in tambon Mae Salong Nai, about 40km away from Mr Jawa's home, amid reports he may have fled to a neighbouring country.

However, he did not get that far. Mae Fah Luang police say a patrol team found him walking past their station early on Wednesday. When Mr Jawa, wet and hungry, saw the patrol car he jumped into the bushes, arousing suspicions.

Police stopped and asked his name. He replied innocently: "My name is Jawa." Police arrested him with deputy national police chief Pol Gen Suchart Theerasawat leading questioning at Chiang Rai provincial station. Later that night police took him on a plane back to Bangkok. He has been charged with intentional killing and concealing a body.

Two elderly widowers vying for the affections of a 31-year-old woman in Buri Ram let their rivalry descend into bloodshed, after one man shot the other in a fit of jealousy. 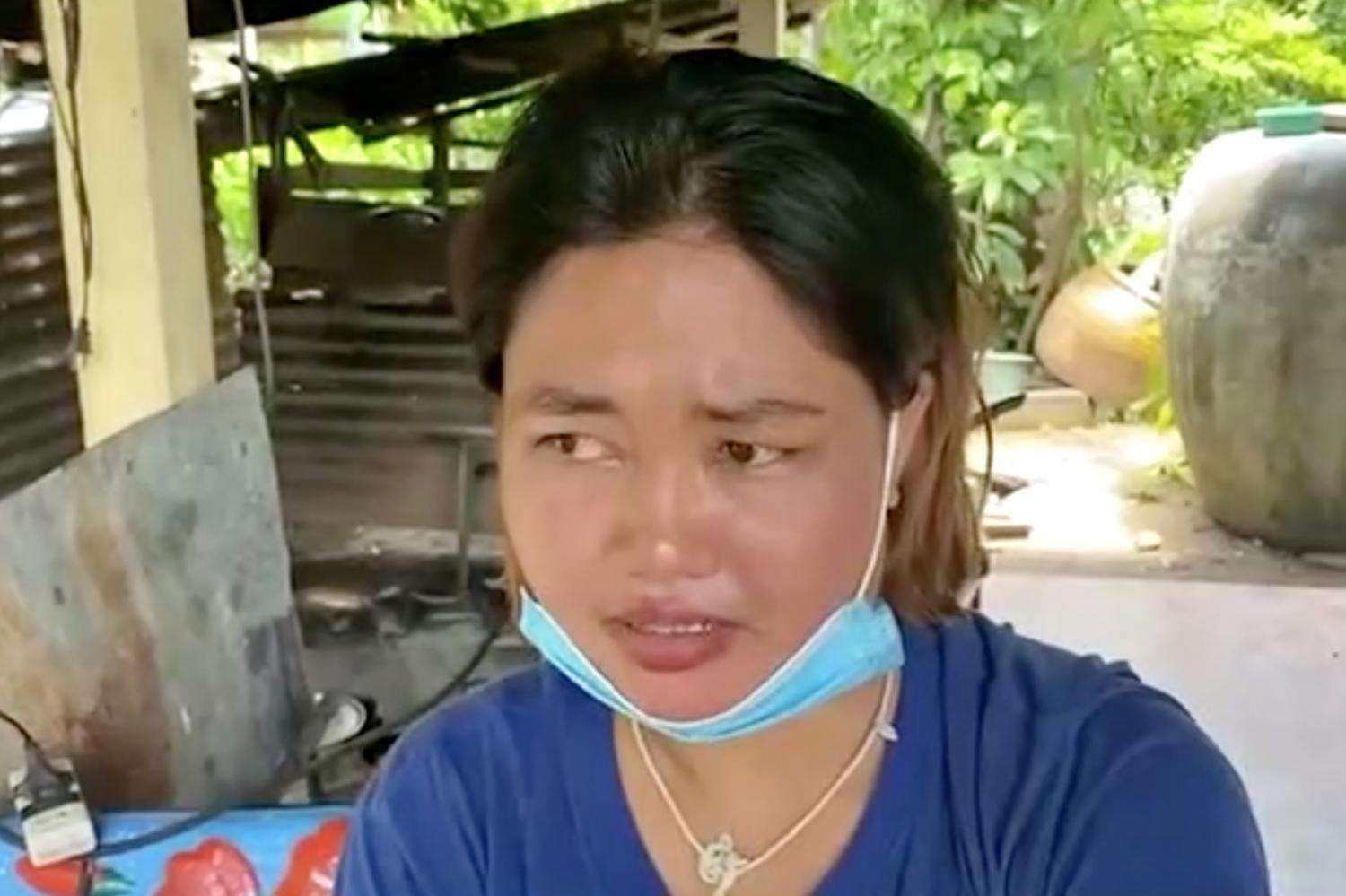 Samran, 69, from Satuek district, was shot in the right leg on July 10, allegedly by his neighbour, Thongpool, 72. Thongpool, who initially denied shooting anyone, later admitted he and his neighbour had a "misunderstanding" over the young woman, Nam Fon, who split up from her husband a couple of months ago. Both men gave her cash gifts though Nam Fon denies leading them on.

The men would see each other visiting Nam Fon, who also lives nearby, and feel put out. However, the rivalry grew too much for Thongpool. He allegedly tried to scare away another neighbour with his gun the same day, after he, too, showed too much interest in Nam Fon.

Thongpool told police that he helped Nam Fon with her finances and also gave her money, though only as a kindly uncle might help out his niece. Under questioning, he declared he was no longer keen on the young woman as she had brought trouble into his life.

After he initially denied shooting Samran, police searched a relative's property, where they found a rifle hidden in a toilet. The obliging relatives said it belonged to Thongpool. Police said the firearm showed signs of having been fired recently and sent it for gunpowder residue tests. Later Thongpool admitted shooting the firearm, but said he did it just to scare Samran, who needed 10 stitches to treat his injury. 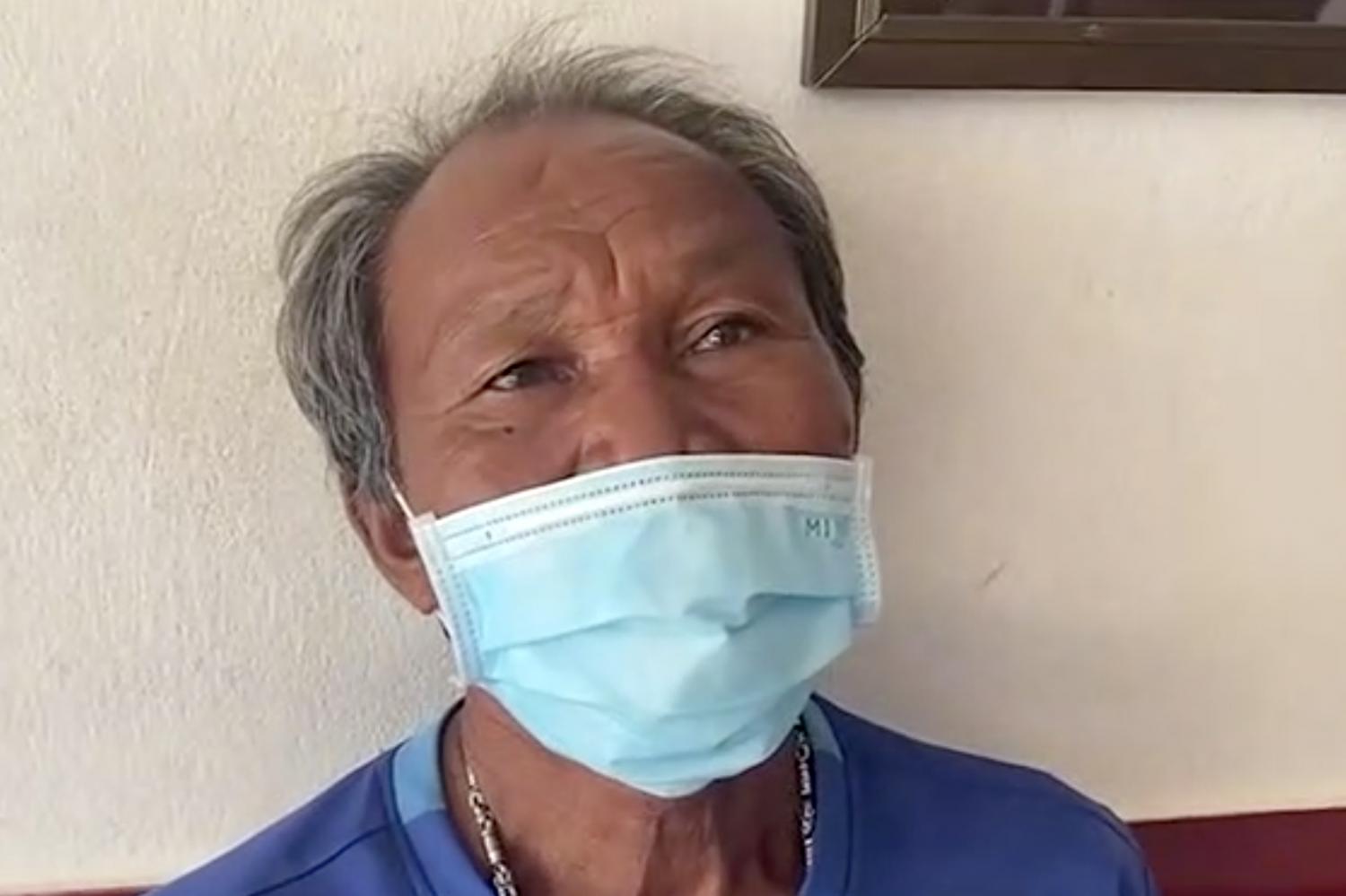 Nam Fon said the men started drawing close to her after she left her husband. Samran forbade her from visiting Thongpool's place, which may have set off their row. However, while she was friendly with the widows, she had not thought of starting a future with them.

Nam Fon's elder sister, Ampaporn, 36, said the incident stemmed from jealousy. "After losing his wife, Thongpool turned into a Romeo, staring at much younger women in the village. He is a man of means and owns lots of land.

"He said if Nam Fon was interested she could move in with him. He would give her 5 rai of land straight away. However, Nam Fon still loves her husband, so wasn't interested. Samran also liked her, but wasn't as brave as Thongpool," she added. When Nam Fon drops into her place, she said, the two old men follow and exchange playful banter.

Meanwhile, a villager said he was sleeping in a hammock under Nam Fon's house on the day of the shooting. He got up briefly and while he was away, Nam Fon took his place. "Thongpool must have seen it and assumed we were close as we switched places with each other. He came over, pointed his rifle at my head and said 'should I shoot?'" the villager said. Hours later he heard he had shot Samran. Thongpool, who has vowed to fight the case, has been charged with having an unlicensed firearm, taking it to a public place, and shooting Samran.