Local leader lets down the team

A village headman in Buri Ram is facing calls to resign after he took off with another man's wife.

"Samreng", 57, a village headman in Sawaijeek, Muang district, says he wants to start life again with a village health volunteer, "Hong", 55, whom he claims he has loved for 30 years.

The couple abandoned their families and left town for five days recently. They came back to declare they loved each other and had started building a house in the middle of the village.

The news upset locals who said it was a poor way to behave for a local leader. Mr Samreng is himself married and has three children. His critics have now started a petition calling on the district office to sack him.

Hong, who has declined to talk to the media, has been married to local man "Pik" for 40 years and together they have two children. Mr Pik is running hot and cold on the affair, at one point saying he was prepared to let his wife go if she handed over her share of their assets to their children.

More recently, however, he has complained to the district office, which has called in everyone involved to clear the air.

Earlier, the couple met for talks with their elders at the home of Sawaijeek kamnan Som-in Kachernrum. A clip of the conversation found its way on to social media.

Amid mounting pressure in the village, Mr Samreng and Ms Hong later left to be alone for five days, though Mr Samreng denies they absconded. He said their relationship has come too far for them to be parted now and hopes his wife and Mr Pik understand.

"I told my wife Reudee and the kids that I love Hong. At first she could not accept it but now there's no drama," he told reporters.

Mr Samreng said he has loved Hong for 30 years, but she went and married Mr Pik instead. After he took on the job of village head they drew closer and the relationship blossomed a year ago, he said. He admitted he had visited her home, opposite his own, for sex when her husband was away.

He said he was building a house in the middle of the village as their nuptial home, as he intends to marry Hong once her husband has agreed to divorce her.

Asked about opposition to his affair, he said he was aware of the petition but also knew of locals who appreciated his efforts and did not want him to step down.

"Some people are persecuting me and simply want to topple me from my job," he said.

"A local called this morning asking me not to quit. He said villagers are able to separate work from personal matters. As far as my family is concerned, while I would like a divorce, I will carry on with my duties of looking after my wife and kids," he said.

He was not worried about the prospect of legal action as both sides had met at the kanman's house and understood each other.

Mr Samreng's wife, Reudee, said she was not willing to accept Ms Hong as a second wife, and doesn't want her in their house.

Mr Pik, 63, Hong's husband, admitted telling the meeting at the kamnan's place that he didn't want his wife back, and would give her to Mr Samreng. However, he said he was speaking sarcastically.

"I still love her and am worried about her," he told reporters.

Mr Pik said he didn't think his own wife would be so brazen and shameless as to take off with another man. "We have been through many hardships together, but if she feels remorse and is willing to quit such behaviour, I am prepared to accept her back."

"Kat", one of the upset locals who signed the petition calling for Mr Samreng's ouster, said she feels sorry for Mr Pik. He is left with the job of looking after Ms Hong's ailing mother, who is unhappy with her and wants her to come home.

She rubbished Mr Samreng's claim that he had loved Ms Hong for 30 years, as Ms Hong and her husband had been married for even longer. "There's no way they would have been together before Pik came along," she said.

"They are being selfish and he should have stepped down before taking off with her. For a village head to steal a local's wife is just not on...no one is persecuting him and nor is the affair a karmic throwback to any mysterious happenings in the village's past as he says. It's happening because both sides want it to, and he is a flirt."

Deputy district chief Ukrit Hongthaisong said Mr Pik had written to him urging the district to take action against Mr Samreng for stealing his wife.

"I have contacted Mr Samreng, Ms Hong and others involved, calling them to a meeting. Mr Samreng may face disciplinary action," he said. 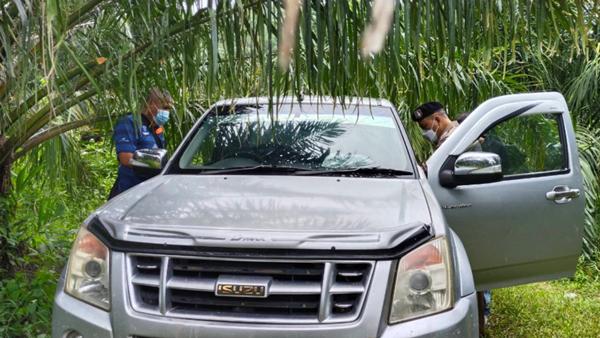 The pickup where the shooting took place.

A former drug inmate in Trang is on the run from the law after allegedly killing his long-time love and mother of his child. 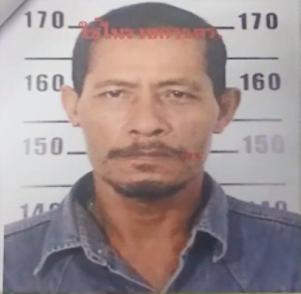 Somchai Mitrsan, 54, fled after the shooting about 100m from the rubber and palm oil plantation where he works in Kalase, Sikao, on July 18. He and his married lover, farmer Onuma Suratisak, 42, fought over his gun after he tried to stop her leaving his home.

Onuma, accompanied by their nine-year-old daughter Nam King, had visited him but the two argued after she suspected he was seeing another woman.

She returned to her pickup with their child, but Somchai followed with his gun. Onuma was sitting in the driver's seat as they wrestled over the car keys and the weapon.

Nam King, who witnessed the shooting, said her mother appeared to place the gun by her own forehead and shoot. However, other reports suggest it was accidental or even murder. Somchai left her body there and took his daughter to a relative's place, who alerted Onuma's husband about her death the next day.

Family members told the media that Somchai made Onuma pregnant with Nam King shortly before he went to jail on a drug charge. They say the couple resumed their relationship after his release a few years ago.

Pheerasak, 54, Onuma's husband, said he was married to the victim for 24 years. He knew his wife started seeing Somchai about 10 years ago.

"I warned her to stop seeing him as Onuma said herself that he was a wild guy with a bad temper," he told reporters.

He had never met Somchai despite his lengthy presence in his family's life. The last time he and his wife spoke, on the day of her death, Onuma had asked if she could take the little girl to see Somchai as he had bought a phone for her.

However, Nam King said his mother and Somchai argued at his house. A woman called Somchai on the phone and her mother assumed he had a new lover.

Somchai's mother, 75, who lives about 5km from the scene, said she and her son had fallen out over his relationship with Onuma.

"It started with a fight between my younger daughter and Onuma, and escalated when she laid a complaint alleging my daughter, a villager and I had assaulted her.

"I gave my son an ultimatum to stop seeing her and he refused so we didn't see each other again. But now Onuma is dead I am happy to have him back," she said.

After Somchai went to jail, Onuma's husband took over raising Nam King. Police say they are sure Somchai is hiding locally but have yet to find him.

A Phangnga man has been nabbed for killing his uncle after he took off with his wife. 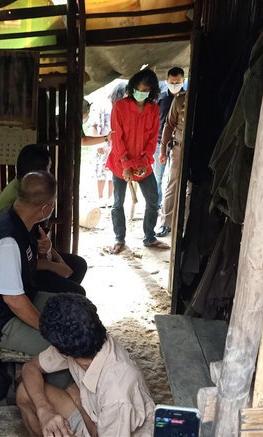 Wathit Kongrak, 37, killed his uncle, Boonlert Niamjamroen, 37 at the family rubber plantation in Thai Muang on July 15. His uncle had returned to the village four days before after taking off with Mr Wathit's wife.

The victim's elder brother, Thammanoon Wareepuak, 53, said the two were having a meal in a hut on the plantation when Mr Wathit, his nephew, kicked in the door and shot Boonlert once in the temple. His body fell onto his own as Mr Wathit fled the hut without saying a word.

Boonlert, he said, started an affair with Mr Wathit's wife and absconded with her to Kuraburi, Phangnga, leaving Mr Wathit to raise their two children.

Mr Wathit said he was picking fruit in the family orchard when he saw Boonlert turn up and enter the hut. He fetched a gun, burst in and shot him.

After the shooting Mr Wathit told his mother what had happened and contacted the village head. He threw the gun into the stream at the back of the orchard and calmly waited for police.

Mr Wathit said he was unhappy with both his wife and Boonlert when they took off but had started to recover emotionally. When his uncle turned up at his grandfather's place days before to boast that he and Mr Wathit's wife intended moving back to the area, his heart plunged back into turmoil.

"I found out he was seeing my wife about six months ago. We argued and I almost shot him on that occasion but felt sorry for his kids, so let him go.

"But 4-5 days ago, Boonlert returned and mocked me. He said he would bring my wife back to the area. I begged him not to as I didn't want anyone upsetting me again, but he ignored me."

Phadung Kongrak, 62, Mr Wathit's mum, said the victim was her younger brother. When Boonlert told family he intended to move back, relatives protested, telling him he should live somewhere else.

She felt bad about what happened, as Mr Wathit is the family's main breadwinner. She would have to look after his kids when he goes to jail. Police have charged him with murder.