A trip to the central province of Ang Thong reveals majestic temples and Buddha images from the Ayutthaya period, market communities and museums featuring works by talented locals

The gigantic Buddha statue known as Luang Pho Yai rises 95m above the temple grounds at Wat Muang in Ang Thong's Wiset Chai Chan district. From afar, you can see his calm face and oval-shaped head with a flame-like halo on top of hair curls. 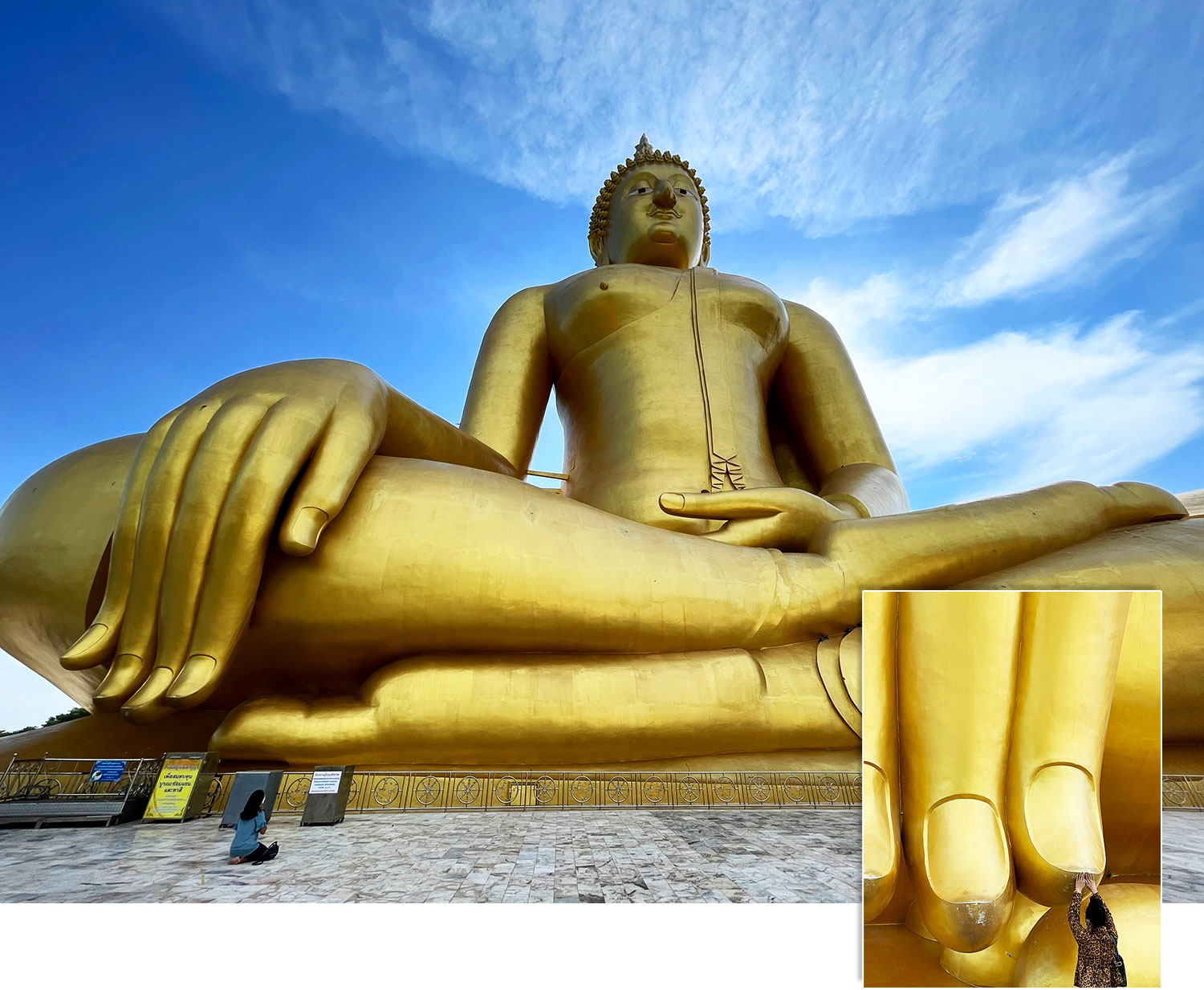 Luang Pho Yai of Wat Muang. Touching the fingertip of the gigantic 95m-tall Buddha sculpture is how locals ask for a blessing.

But when you get closer and stand in front, you will feel humbled by its size. If you look up, you will wonder if he is looking at you or perhaps aimlessly at the ground.

The statue is the largest Buddha image in Thailand. Its height is similar to a 30-storey building while the width is 63m. It was built due to the initiative of the late Luang Pho Kasem, the first abbot of Wat Muang, which is an old temple founded during the Ayutthaya period. At that time, Ang Thong was an outpost, so when the Ayutthaya kingdom lost its last battle in 1767, the town was burnt down and the temple was damaged and abandoned.

Two centuries later, Luang Pho Kasem found the ruined temple during his thudong (long walk) pilgrimage in 1982. He rested in the temple grounds and liked the peaceful atmosphere. One day during his meditation, he had a vision of two old Buddha images, Luang Pu Khao and Luang Pu Daeng. From then, he began to renovate the site. Bit by bit and with the help of locals, the renovation brought back the glory years of the temple.

In 1986, the temple was granted Visungamasima or the legal status of a Buddhist temple as a juristic person. In 1991, the late abbot launched the Luang Pho Yai project, aiming to celebrate the 85th birthday of His Majesty King Bhumibol Adulyadej the Great in 2012 as well as to mark the 80th birthday of Her Majesty Queen Sirikit The Queen Mother that year.

In 2007, the construction was completed. It took about 16 years at a cost of 131 million baht. Since then, the temple has been a tourist attraction and Luang Pho Yai is now a famous landmark in the province. 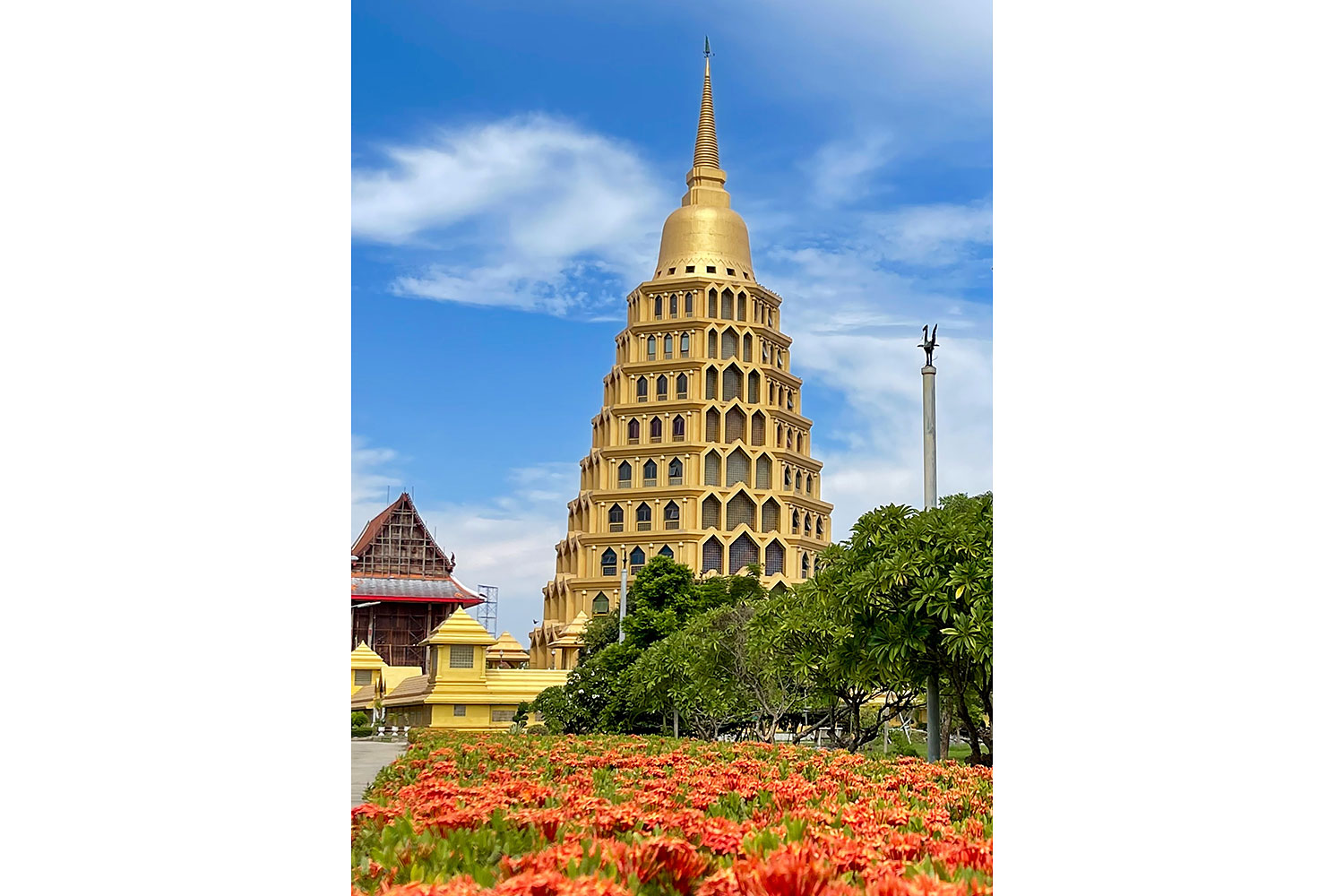 The golden pagoda of Wat Tha It.

The formal name of the image is Phra Phuttha Mahanawamintr Sakayamuni Sri Wiset Chai Chan. It was built in a pang man vichai posture (the attitude of subduing Mara) or calling the Earth goddess to witness the enlightenment of Buddha. He sits cross-legged with one on top of another while his left-hand rests on his lap. His right hand is on his right knee and pointed to the ground. Locals believe that they will be blessed when praying while touching the fingertip of the Buddha sculpture. Before the pandemic, the temple was always crowded and people stood in long queues for the chance to touch the Buddha's fingers. But when I visited the temple last week, there was only a handful of visitors. A signboard warns that anyone wanting to touch the Buddha's fingertips must use hand sanitiser before and after prayer.

In addition to Luang Pho Yai, the temple has a prayer hall fully decorated both inside and out with pieces of glass. The hall houses a seated Buddha image, the first of its kind to be made from silver. Within the 72 rai site, the temple has a large ordination hall, a zone for Chinese shrines, an exhibition area showing places of hell, sculptures of deities and characters from classic Thai literature.

The temple is not far from Talat Wiset Chai Chan, a century-old market. Wiset Chai Chan was the former name of the province during the Ayutthaya period. The province was renamed during the early Rattanakosin period. Locals believe that the name was taken from its geography, the flat land or basin that turned golden during the rice harvesting season.

The province has two major rivers passing through it. One is the Chao Phraya River to the east and the other one is the Noi River to its west. Farming is the main source of income for people in the province. They grow rice, sugar cane and tropical fruits such as mango, banana and santols. Some farmers also grow durian and it is available for sale at this time.

Talat Wiset Chai Chan is only a 10-minute drive from Wat Muang. I drove on a rural road flanked by green rice fields to the old market which is located in the San Chao Rong Thong community. The market is also known as Talat San Chao Rong Thong. It is believed that this community, located along a bank of the Noi River, was founded in the Ayutthaya period.

The San Chao Rong Thong market is also known as Wiset Chai Chan market. It was founded during the reign of King Rama V. 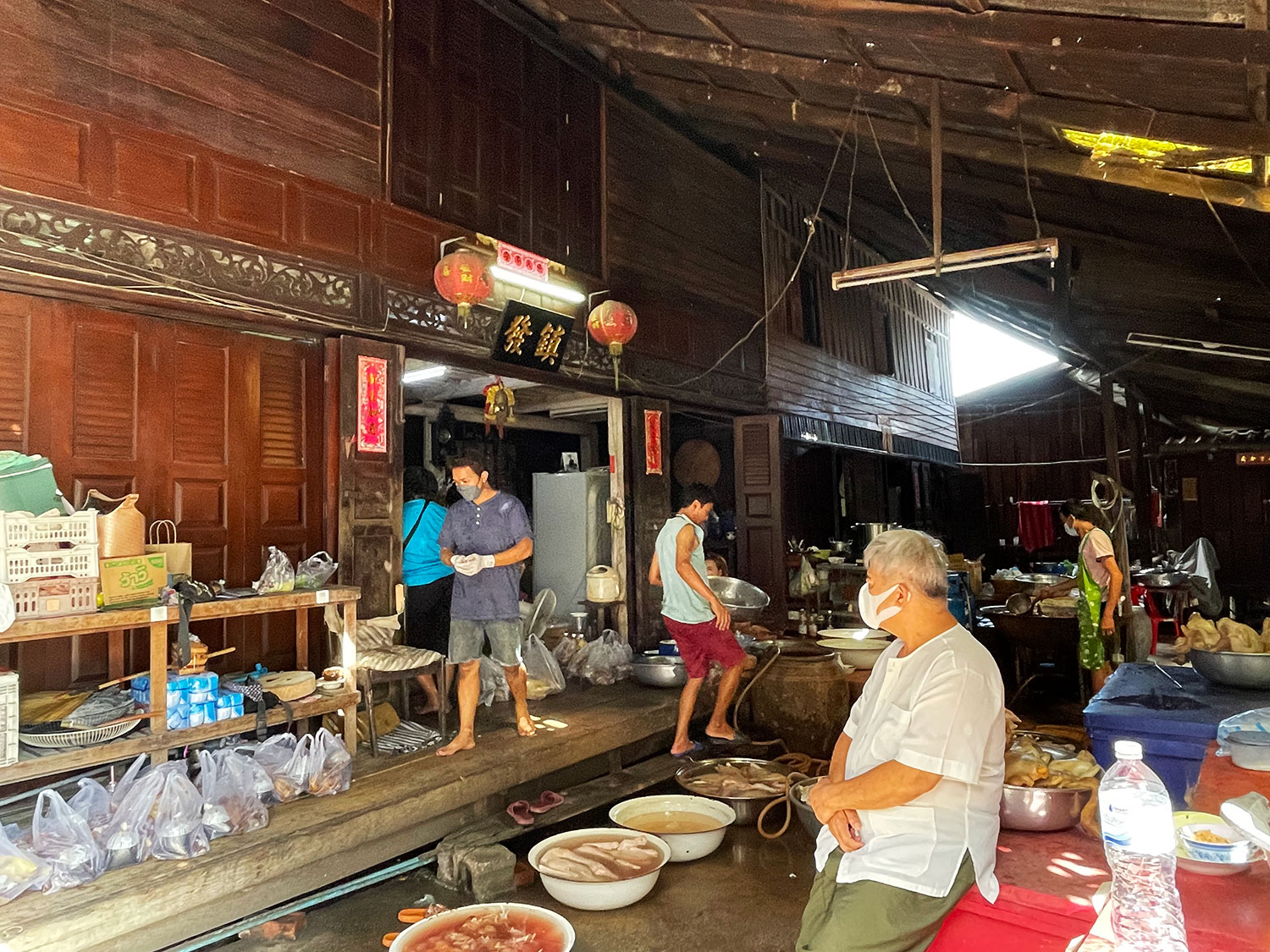 A Chinese family prepares boiled chicken and pork for sale.

According to its history, the small farming community expanded after Chinese people migrated to the area in 1877, or during the period of King Rama V. Led by Singha Saechua, the settlers built wooden shophouses along the river. They set up shrines including the Guan Yu shrine and opened a market.

During the early years, the market was named after the Chinese leader. It was called Talat Ta Chua or the market of Grandpa Chua.

The market later expanded when more Chinese people moved in. Among them were skilful goldsmiths. They opened several gold shops (rong thong in Thai) around the Guan Yu shrine so people later named the market Talat San Chao Rong Thong.

In the recent past, when people still commuted by boat, the community was big. The market was also a centre of trading and transportation connecting Ang Thong to Bangkok and to Nakhon Sawan. However, when Asian Highway 1 was built in 1937, the glory of the market became history.

In 2005, a fire also occurred and burnt down 180 houses on the 7 rai site, which was a large part of the community. After the incident, locals and authorities wanted to preserve the community. Academics were invited to rebuild and renovate the area and a year later, the community reopened its 144-year old market. In 2007, the site won the Best Architectural Conservation Award from the Association of Siamese Architects.

Before the pandemic, weekend travellers from near and afar came to Talat San Chao Rong Thong for a walk in the market or to try local food and traditional desserts. However, during the pandemic, many shophouses are now closed. The boat cruise service along the Noi River has also been suspended but the old Guan Yu shrine is open. Remember to avoid visiting the shrine in the late afternoon because that is when people go to talat nat, a regularly scheduled temporary roadside market, located not far from the shrine. 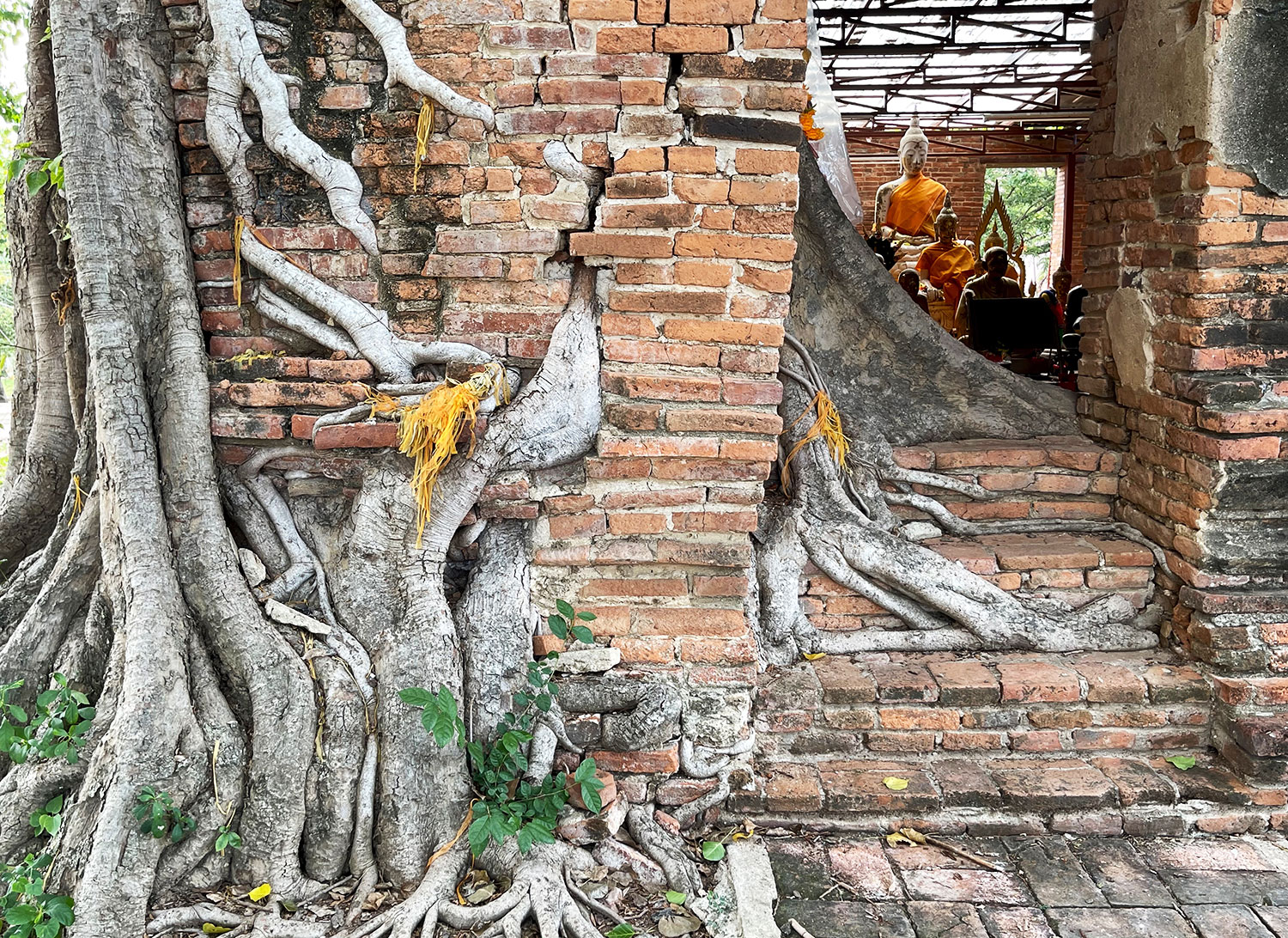 Luang Pho Khao is housed inside a ruined hall. 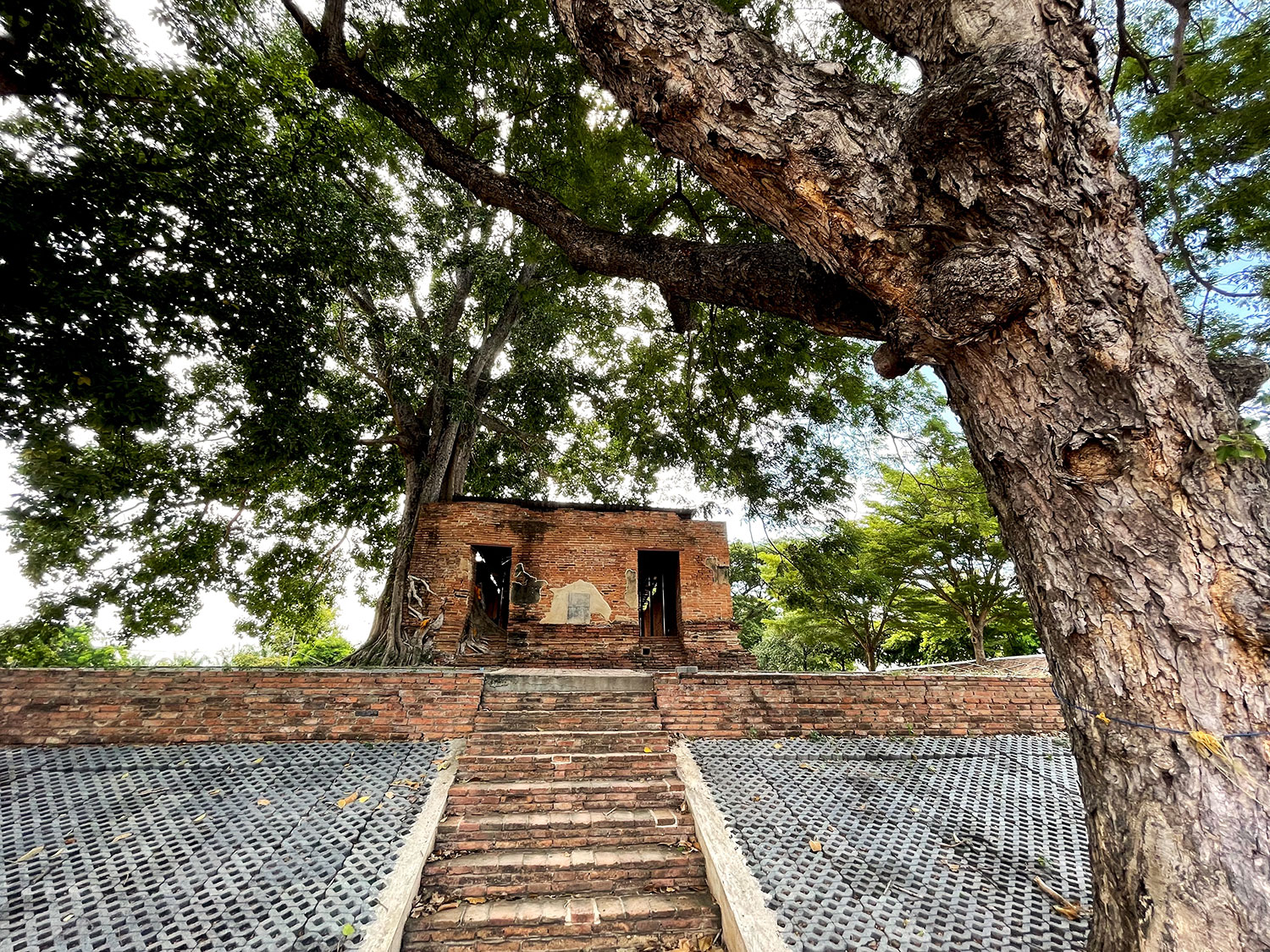 The remains of an old prayer hall at Wat Khun Inthapramun. 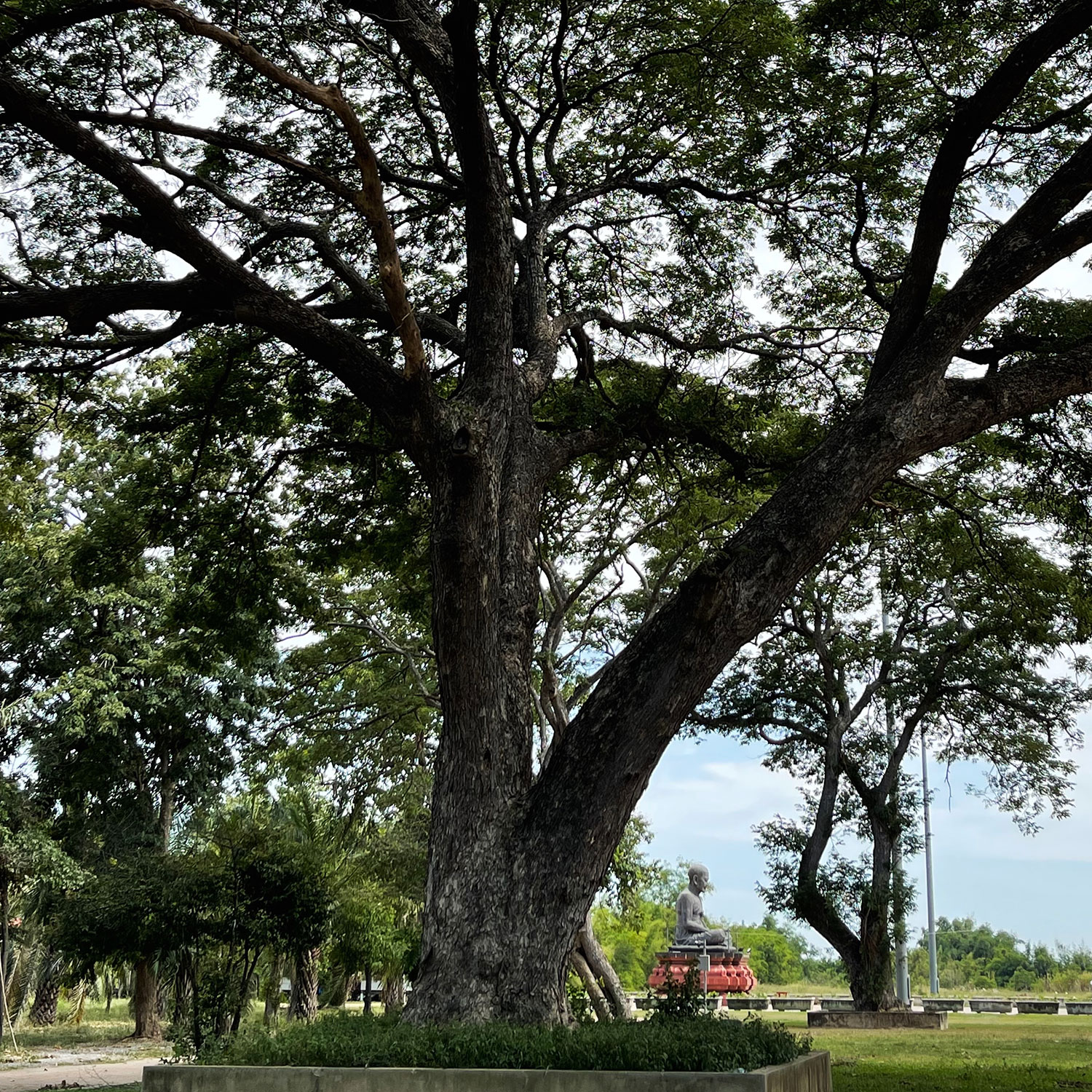 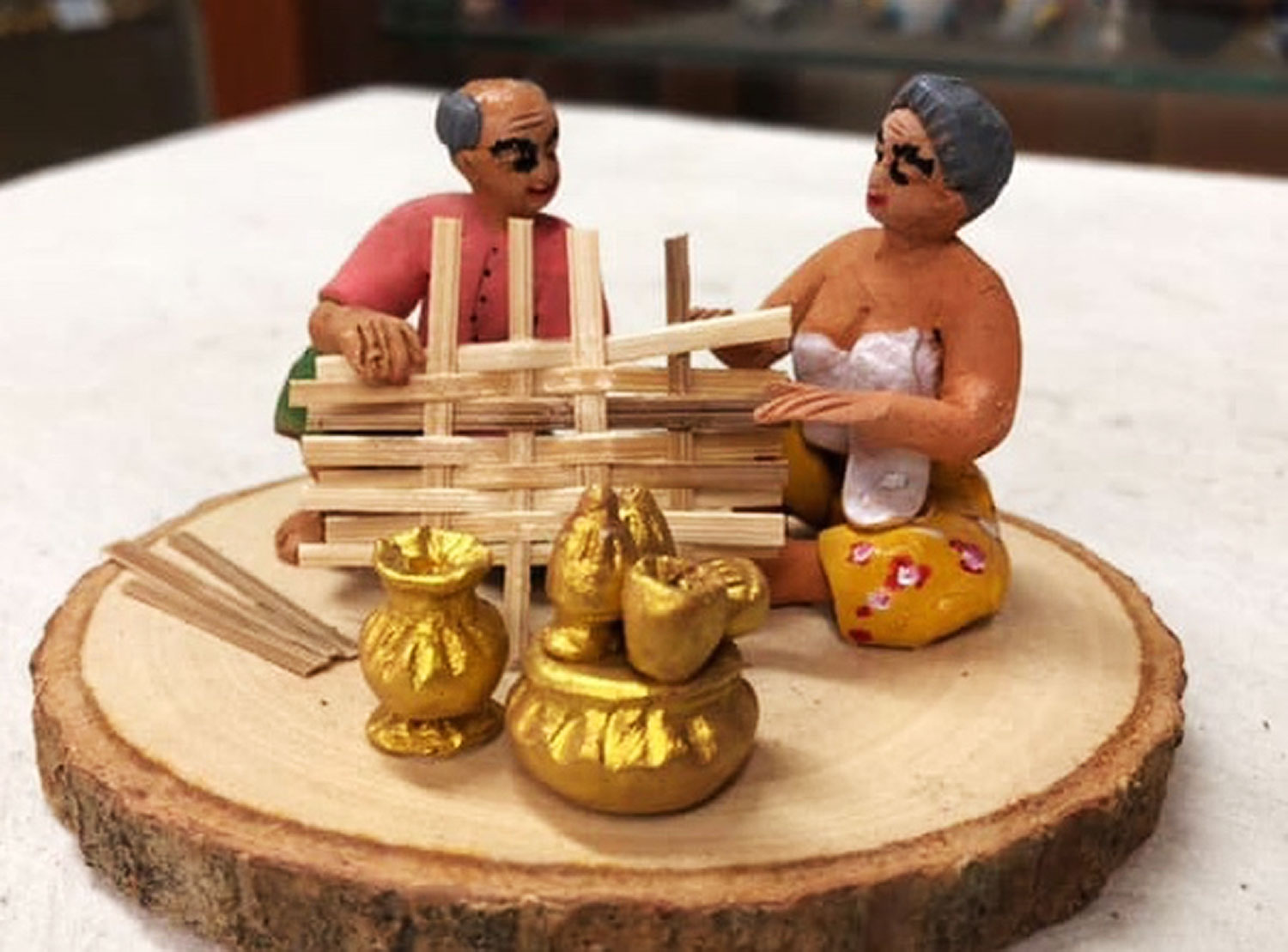 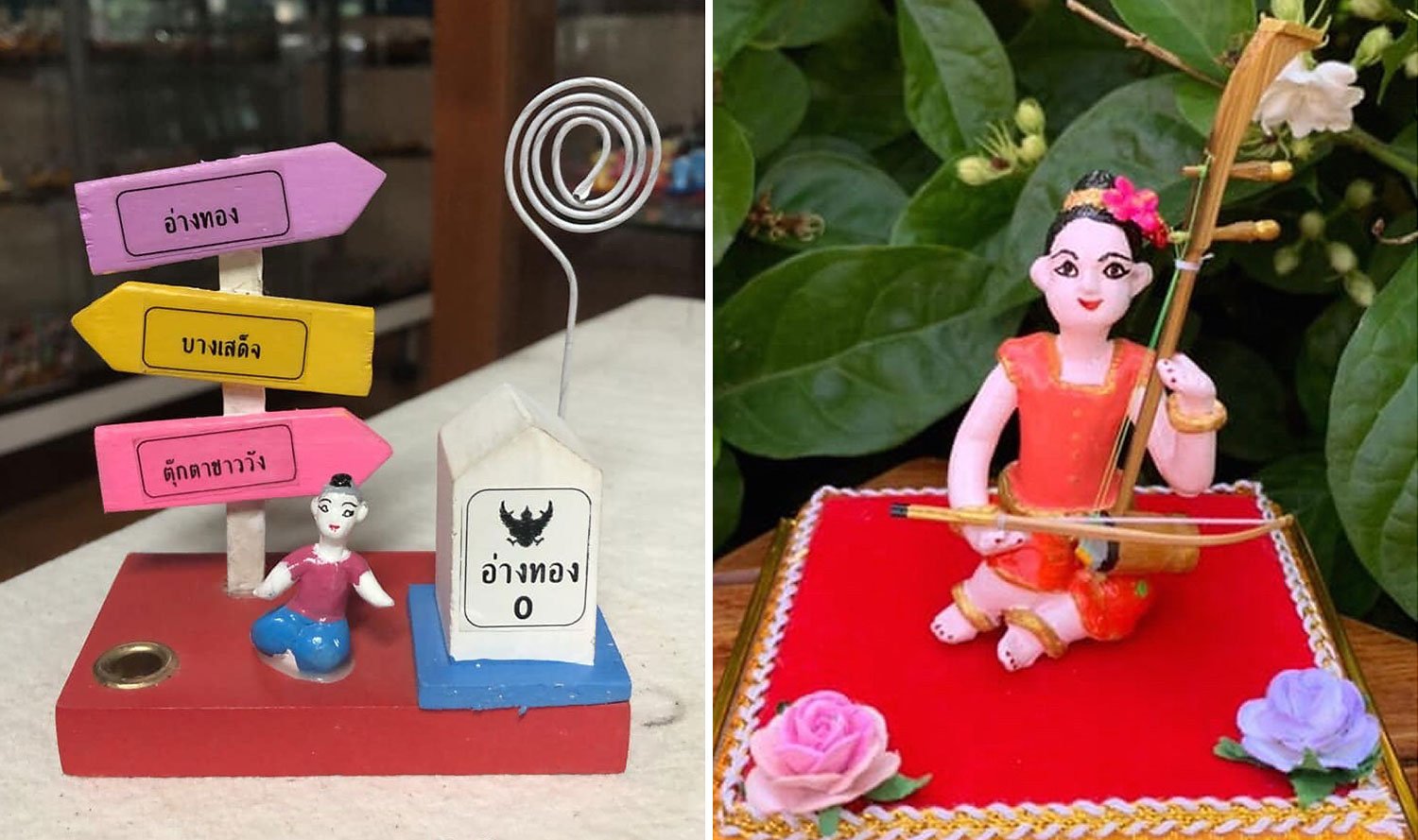 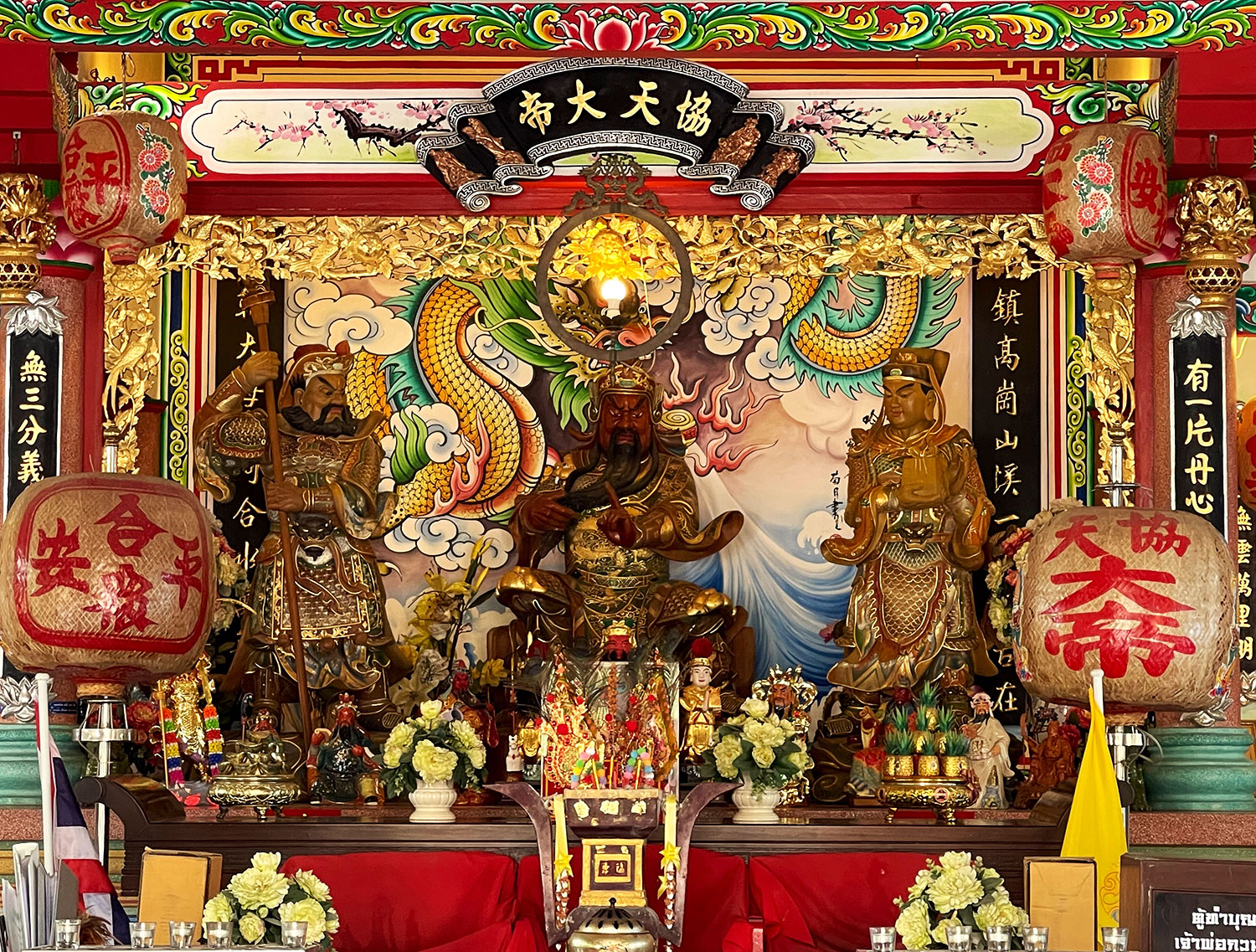 The Guan Yu deity is housed in the Rong Thong shrine.

The sculpture of the Goddess of Mercy (Guan Yin or Bodhisattva) is at the front of the Guan Yu shrine.

From the Guan Yu Shrine, I drove to Wat Khun Inthapramun in Pho Thong district, about 15km away. I took a detour on the rural road 3454 just for the scenic view of trees and a waterway.

The temple was burnt down during the fall of the Ayutthaya kingdom. It was abandoned for more than a century. What remained was the reclining Buddha statue, some brick pillars and a wall base to indicate that the statute was once housed in a prayer hall.

The temple was restored during the period of King Rama V. Currently, the temple has a modern ordination hall but the highlight is still the old reclining Buddha image.

Located not far from Wat Khun Inthapramun is Wat Tha It. The temple has an eye-catching golden pagoda. It is 58m tall and 40m wide. It has a pyramidal structure with nine stories topped with a bell-shaped chedi. The stupa was built in 1992 to replace the damaged one. It houses Buddha relics and Buddha images.

If you plan to visit Ang Thong when the pandemic is under control, stop by Ban Tukkata Muay Khat Chueak, a private museum exhibiting a series of traditional muay Thai dolls. The museum is located in the house of Bundit Kosolsith in the Pa Mok district.

His passion to make fighter dolls started as a hobby.

"I love muay Thai so I want to present every fighting technique through my resin dolls," said Bundit.

Bundit, 60, learnt to make dolls over three decades from his mother, a member of Ban Bang Sadet Court Doll Centre. The centre was founded in 1976 with the support of the Foundation of the Promotion of Supplementary Occupations and Related Techniques of Her Majesty Queen Sirikit the Queen Mother. The aim was to help farmers have an extra income.

Starting with clay dolls, he later changed the material to resin to make his dolls more durable. He perfectly captures the feeling of fighters and the angle of action in his fighter dolls.

"Every piece is made by me. It's a pure handmade product," he said.

Before the pandemic, he had opened his home for public visits but today it is temporarily closed. He will soon resume the service and will have more fighter dolls for display. 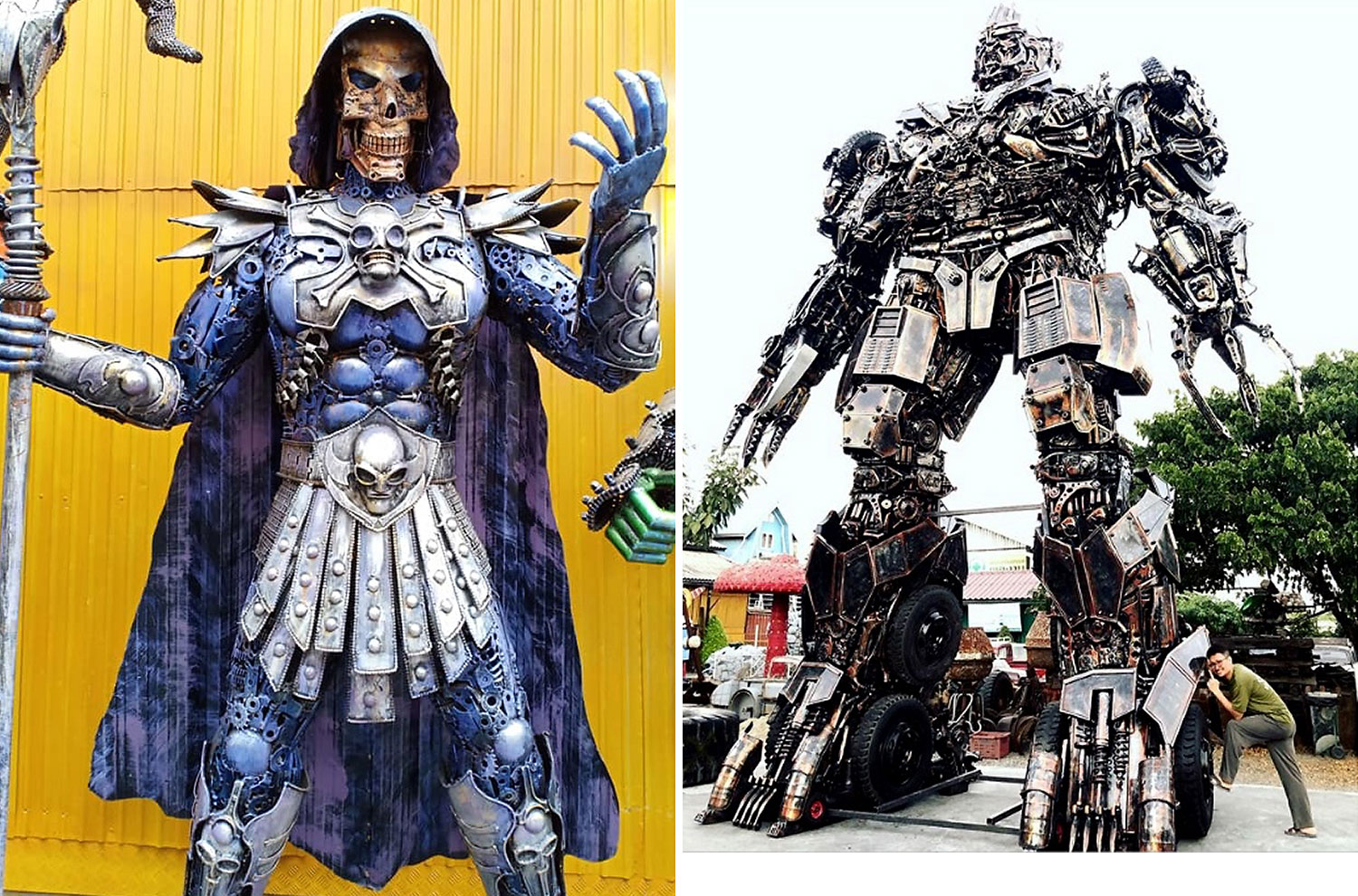 Pairoj Thanomwong has created metal sculptures from scrap for more than 20 years. He creates a variety of art pieces ranging from animals to well-known Hollywood characters. He has opened his home as an art gallery called Ban Hun Lek. The service is now suspended and he hopes to reopen the gallery soon. 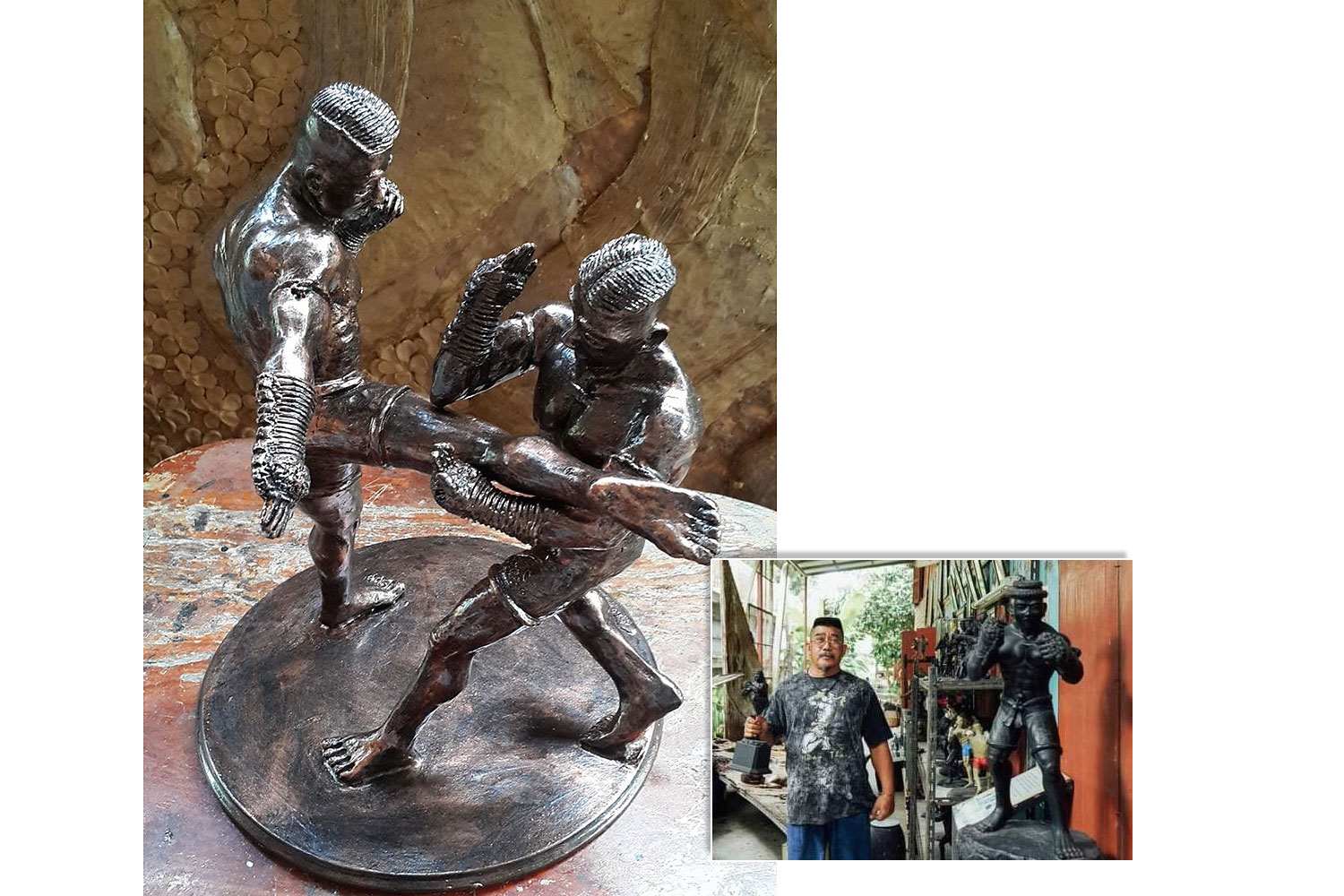 Bundit Kosolsith has created sculptures for more than 30 years. He has opened his home as a museum to preserve the beauty of muay Thai techniques. His museum is called Ban Tukkata Muay Khat Chueak. It will reopen after the Covid-19 pandemic is under control.

The Muay Thai Doll Museum is only 450m away from Ban Bang Sadet Court Doll Centre. The centre is located on the temple ground of Wat Tha Suthawat. The showroom is open every day if you like to see the original clay dolls. The centre exhibits dolls in different aspects of community life and culture such as children at play, old people relaxing, a kid playing a traditional musical instrument or floating market vendors.

Another site worth visiting is Ban Hun Lek (or the House of Metal Sculptures). It is located on a 5 rai plot of land owned by Pairoj Thanomwong in the Muang district. He introduced his first iron sculpture more than 20 years ago when he wanted to create an art piece from spare parts of vehicles and metal scrap.

He spent his spare time creating metal sculptures. Years later, his hobby gained popularity and in 2013, he opened his home as a tourism attraction to exhibit his works, showing art pieces of different sizes ranging from small to 8m tall. Popular are movie characters Ironman, King Kong, Spider-Man, animals and cars.

Ang Thong is about 115km north of Bangkok. It can be enjoyed as a one-day leisure trip if you want to drive to places where you can admire rice fields, open green spaces or pay respect to giant Buddha sculptures at outdoor sites. 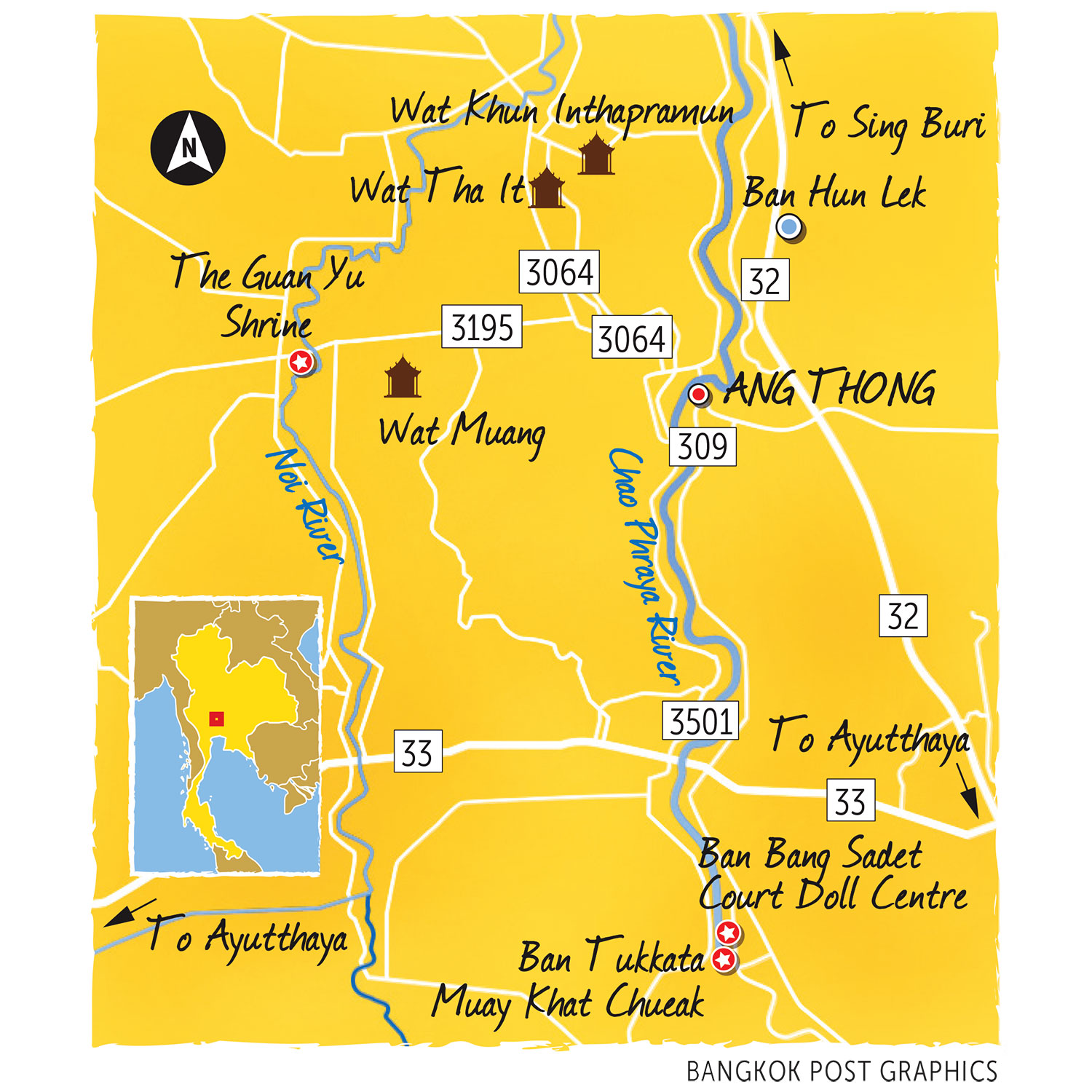