Taking a stand for clean air

Chiang Mai-based artist Thaiwijit Puengkasemsomboon has to stay inside his house during summer due to the air pollution caused by PM2.5. The artist was uncomfortable being locked up in his house every summer and the PM 2.5 pollution was getting worse. Chiang Mai used to be renowned for its spectacular landscape, but last March, Chiang Mai became known as the most polluted city in the world, according to IQ AirVisual.

To tackle the PM2.5 pollution issue, Thaiwijit created aesthetic sculptures, paintings and installation arts that were repurposed from scrap materials for his latest exhibition "One Generation Plants The Trees, Another Gets The Shade". The artist, who is notable for his abstract expressionism with outstanding compositions and colour applications, explained that the exhibition title comes from a Chinese proverb.

Two metal sculptures, Attitude Determines Destiny – Tiger and Attitude Determines Destiny – Crocodile, are made of metals the artist bought from scrap shops and resemble two headless human figures -- one pressing his hand on a tiger head and the other stepping on a crocodile head. Thaiwijit said the sculptures were inspired by a Thai proverb that literally means "escape from a tiger to be confronted with a crocodile". 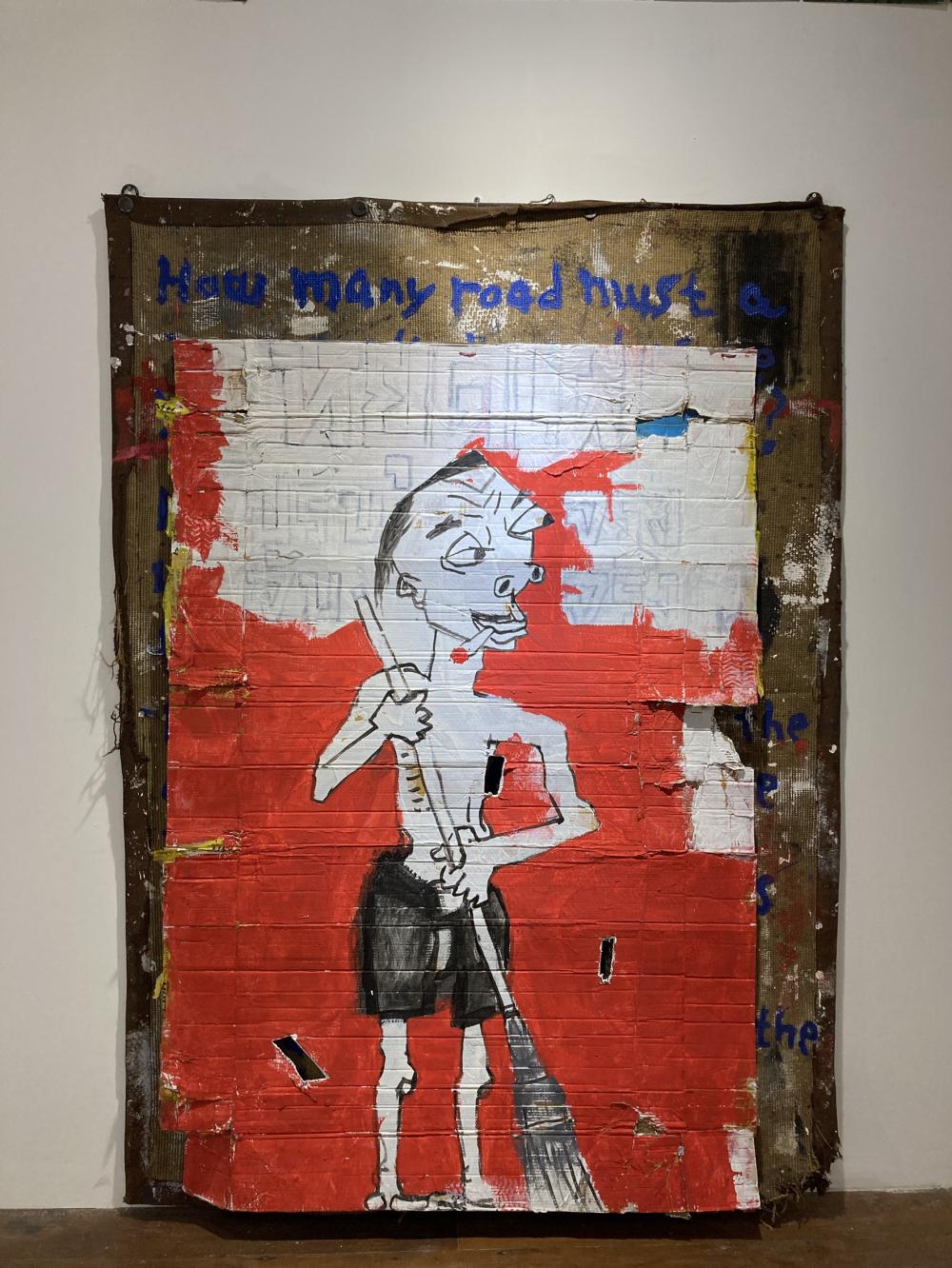 Blowing In The Wind.

"The proverb means we escape from a problem to encounter another problem. In order to find a solution, we must face the problem. Attitude Determines Destiny – Crocodile is a sculpture of a headless human stepping on a crocodile head to signify that since a human causes a problem, a human must solve the problem. The two Attitude Determines Destiny sculptures have no heads which means they are destined to die. If we do not handle this problem, we will die because we keep inhaling toxin into our lungs. The sculptures are used to store dry leaves to let them become compost," said the artist.

At the exhibition, Thaiwijit incorporated found materials in his art. He used cardboard paper from air conditioner boxes to create a painting series Stop Burning, Real Fine, Real Arrest, and one painting, Blowing In The Wind, to satirise how local people and authorities sweep things under the rug to hide them. The title of the series was inspired by a slogan on state agencies' posters that aimed to promote a campaign against agricultural burning. Thaiwijit said the message expressed on the posters stuck to his mind.

"The messages on the poster which said, 'real fine, real arrest', emphasised the authorities would take serious action, but they are only messages, not enforcement. While this campaign was being promoted, local people continued to burn agricultural waste late at night or at dawn. Thus, air pollution did not reduce. Today, the PM2.5 pollution in Chiang Mai is getting worse. In the past, the PM2.5 dust stayed in the air for two weeks, but currently they stay longer from, two to three months," he said.

All the paintings in the series are wrapped in plastic and framed in used wrought-iron bars, which signify people trapped in buildings. 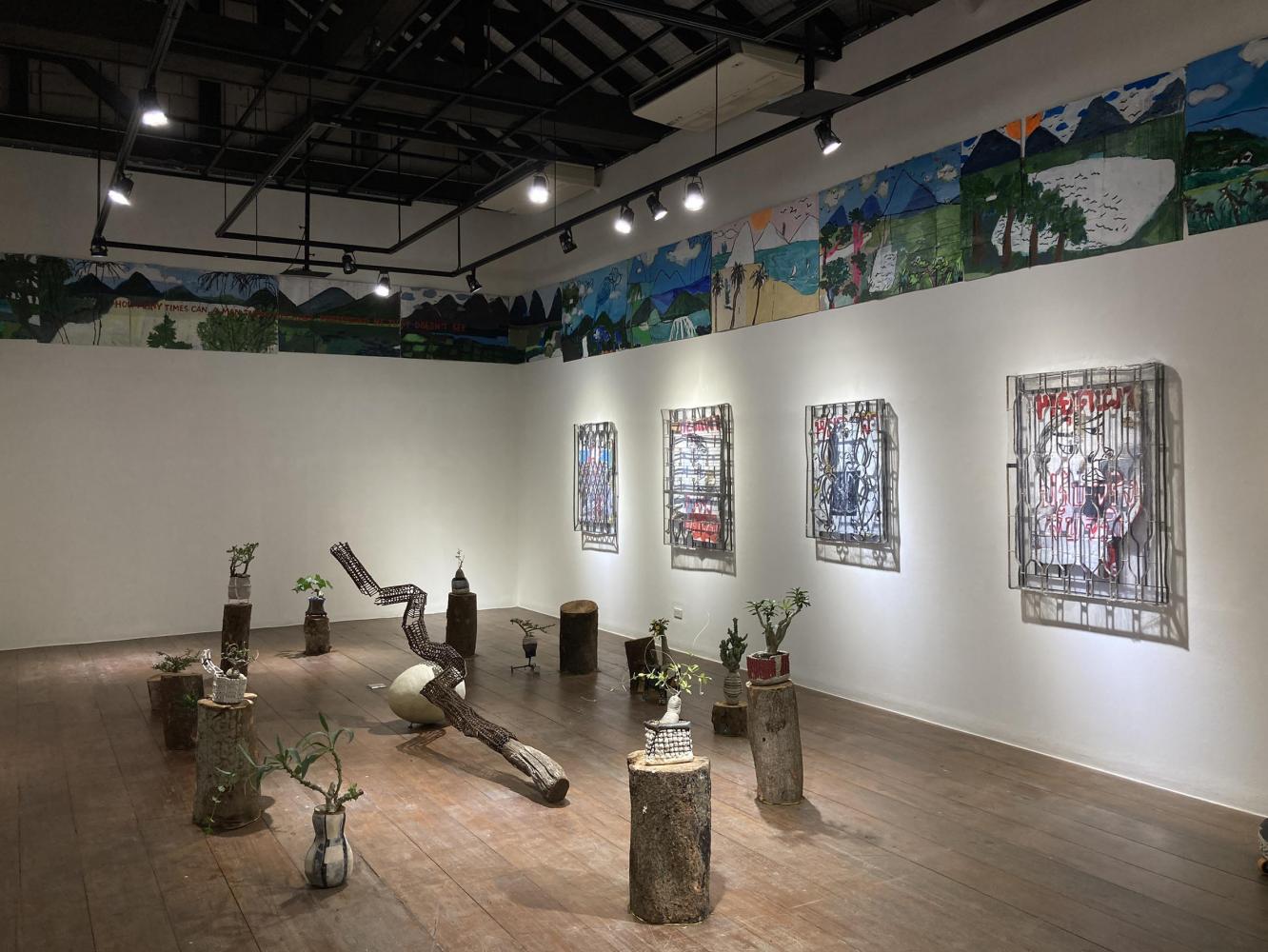 "People should be able to spend their time both inside and outside of buildings. However, during summer, I have to close the doors and windows, so that PM2.5 dust cannot permeate inside and stay inside the house, which is unnatural. I felt like I was locked up. I should be able to stay outdoors to appreciate nature and enjoy well-ventilated open areas," the artist said.

The painting Blowing In The Wind was created on a used rug and a corrugated box that once housed an air conditioner. Thaiwijit wrote some lyrics from the song Blowin' In The Wind by Bob Dylan on the rug and painted a picture of a man sweeping something under the rug. The painting satirises the PM2.5 problem.

"The PM2.5 problem happens year after year and has never been taken seriously. It is like sweeping something under the rug, so the problem has never been solved and we have no idea when it will be solved. The lyrics, 'the answer is blowin' in the wind', are appropriate for this situation since the PM2.5 may stay in the air forever," said Thaiwijit.

The installation art Tree Of Life consists of reclaimed wood and various kinds of potted plant. The highlight is a middle piece made of used metal connected to a log, placed on an object that resembles a large egg.

"Trees are sources of fresh air, moisture and shade. The used metal symbolises trees that are in a bad condition due to cruel destruction. An egg symbolises hope. If an egg hatches naturally, a new life is born. However, if an egg is broken by an outside force, there will be no newborn," he said. 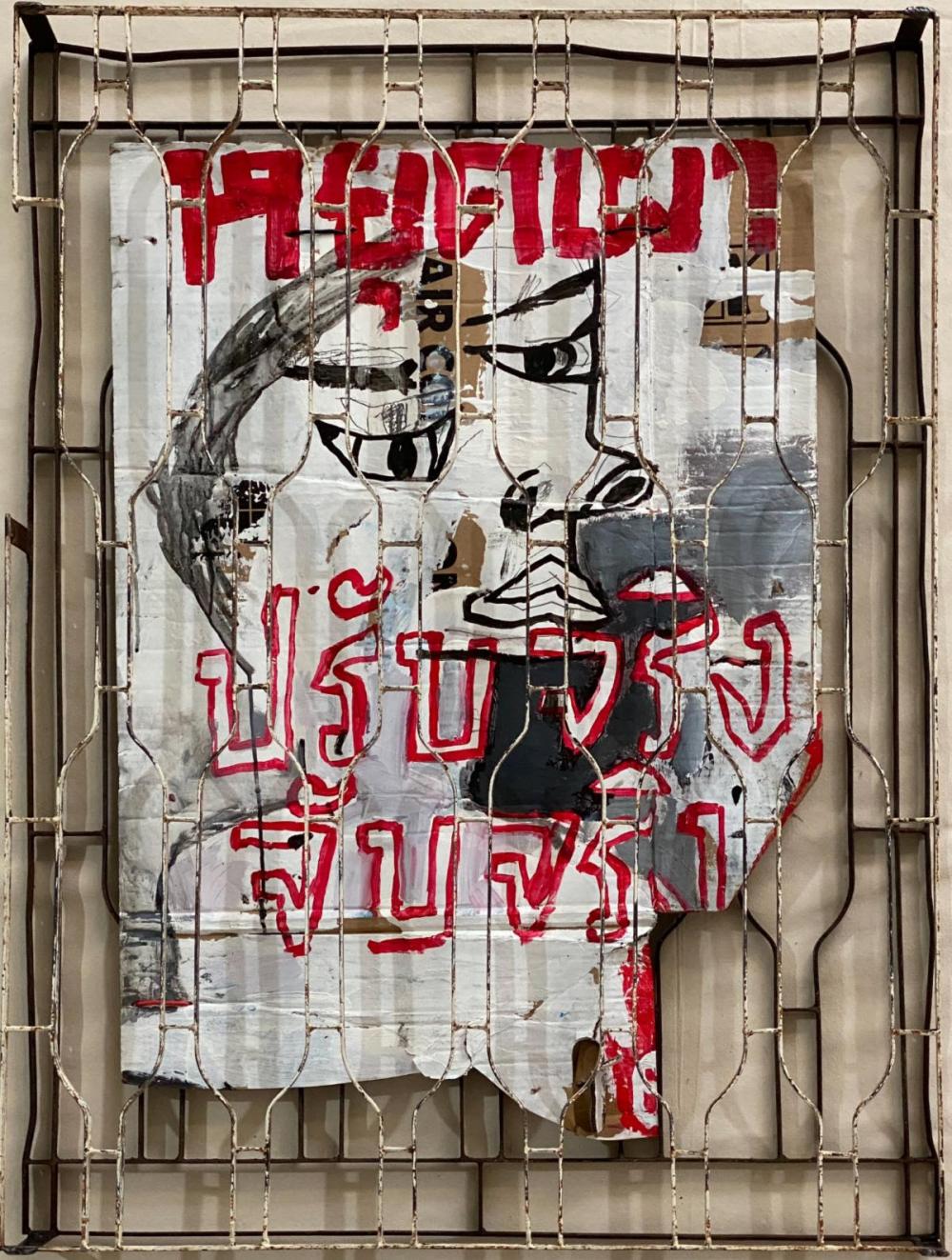 Angkrit Ajchariyasophon, the curator of the exhibition, said since this installation art is arranged to look like a clock, it is a reminder that people have limited time to solve environmental issues.

"This installation art reminds people that we cannot ignore environmental issues since we work against time, so we don't have the luxury of working whenever we feel like it. We must do something now and at the very least, we can start with ourselves first," said Angkrit.

The series How Many Times Pretending features 25 acrylic landscape and seascape paintings on used cardboard boxes. The 26m-long series was inspired by the artist's childhood.

"When I was a child, I never heard of the words pollution, smog, residue and global warming. I experienced beautiful nature, so I drew bright pictures in simple forms like how children draw the Sun, sky and clouds. In the painting series, the message, 'How Many Times Can A Man Turn His Head Pretending He Just Don't See', was written in vivid red colour. This message is a sarcastic reminder that we destroy beautiful nature," Thaiwijit said.

Even though Thaiwijit created the exhibition with the intention of raising awareness regarding PM2.5 pollution, he admitted the problem is difficult to solve.

"The PM2.5 pollution is a complicated issue that cannot be solved by only one person or even one group of people. Earlier this year, there was an art exhibition, 'Art For Air', in Chiang Mai. I hoped it was the beginning of spreading messages. If we have hope and everyone of us tries to find a way out, it can be helpful. If you love trees and plant trees, it can help because the trees will continually grow and will provide us with oxygen and shade in the future," concluded Thaiwijit. 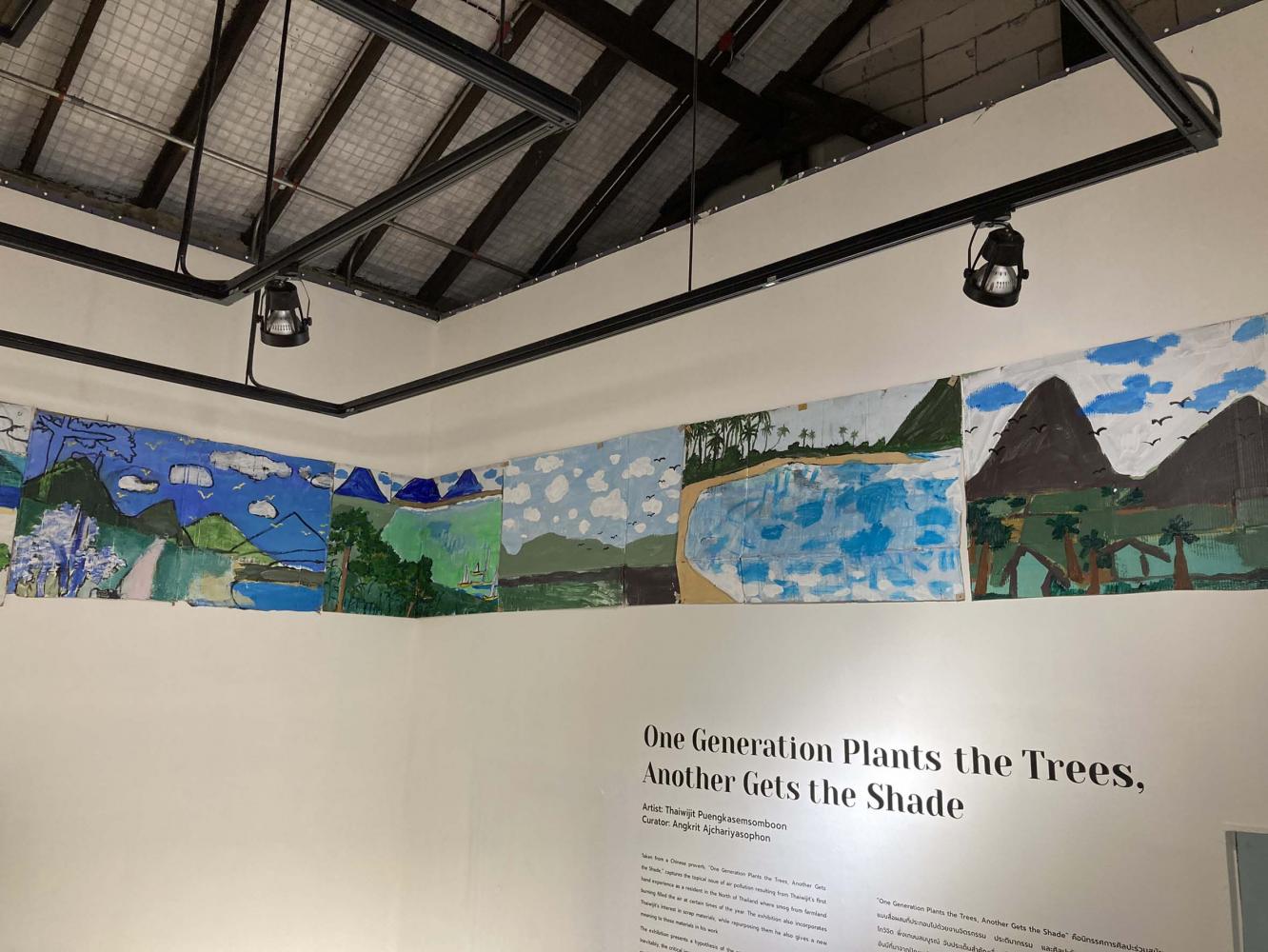 The series, How Many Times Pretending.