Bubble wrap made of polyethylene is often used to fill up spaces in cardboard boxes to protect products during shipment.

Following the rise of the e-commerce industry in recent years, environmentally-conscious consumers and online vendors have voiced concern over non-biodegradable packing materials, especially as they are increasingly being used for product delivery.

Some people use environmentally-friendly packaging fillers such as small packs of popcorn or other lightweight snacks while others use shredded paper or biodegradable foam "peanuts". To provide more alternatives, two entrepreneurs have turned valueless natural material into 100% biodegradable box fillers. One of these products is made of water hyacinth and the other is of dried banana midribs.

Their businesses are located in two different provinces but they share the same idea of introducing environmentally-friendly packaging fillers. Their products can be reused and also help people earn extra income. 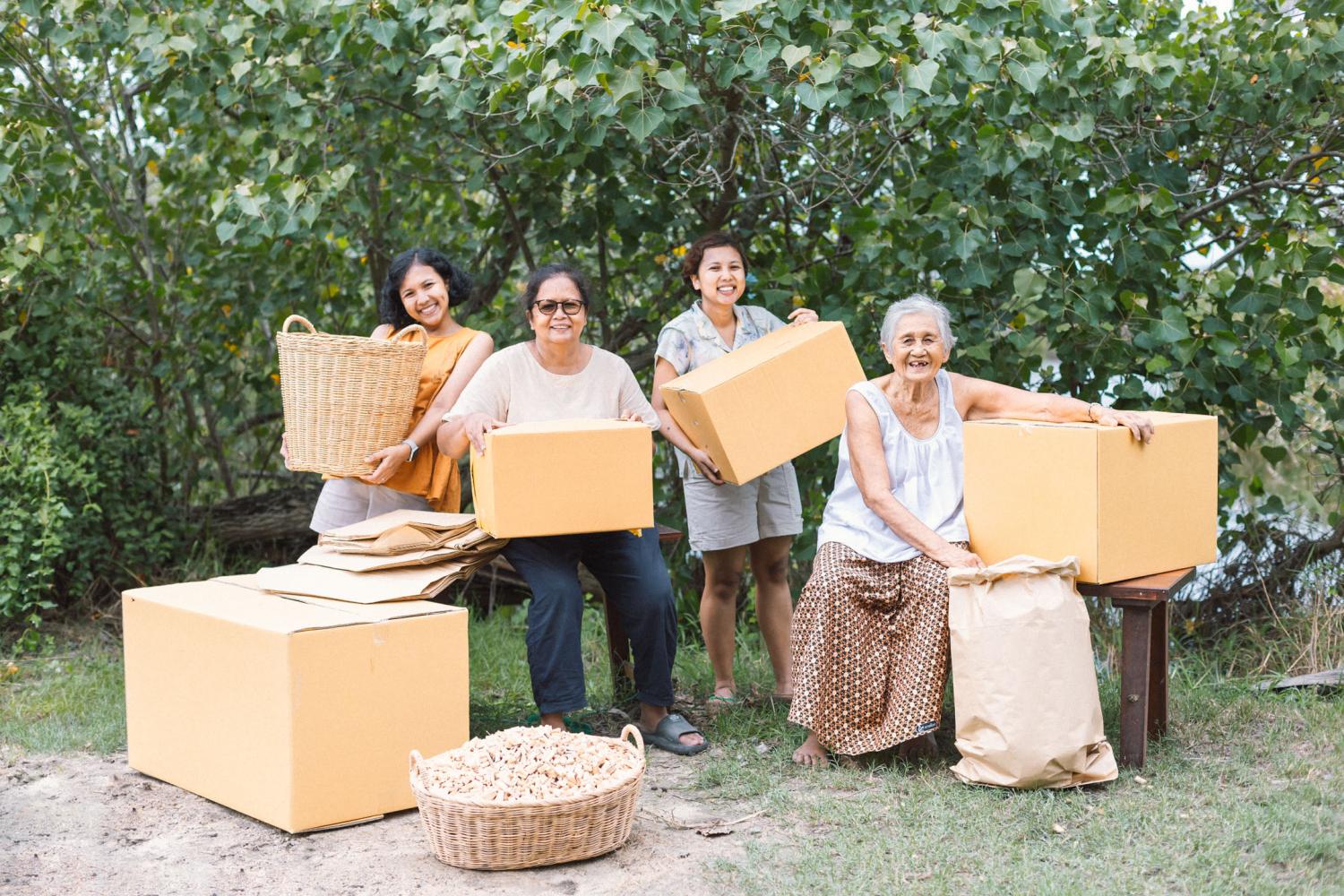 The Pimpama family. From left, Thitima, her mother Bussara who is in charge of the production process, younger sister Pornsawa, and grandmother Somboon.

Thitima Pimpama, 37, is the founder of Chva. The idea to use water hyacinth stalks as packaging filler came to her two years ago when she started selling handmade macrame products online.

She regarded packaging fillers as part of her branding. At that time, she used unbleached cotton yarn to make macrame, so she wanted to have environmentally-friendly box fillers.

"I thought about an experiment my classmates and I did in science class when I was young. Each group was assigned to find a way to prevent an egg from cracking when we dropped it from a table. Each group had their own method but we wrapped our egg with many layers of dried hyacinth stalks. When we dropped it, our egg did not crack. The technique worked," Thitima said.

Water hyacinth is an invasive aquatic weed, which originated in the Amazon River Basin in South America. It was introduced in Siam in 1901 by royalty who visited Indonesia and liked the beauty of the vivid purple flowers and heart-shaped leaves. However, it accidentally entered a canal due to flooding. Since then, the fast-growing alien species -- a single plant can grow within 15 to 20 days -- has clogged waterways throughout the country, including canals not far from Thitima's home in Phetchaburi. 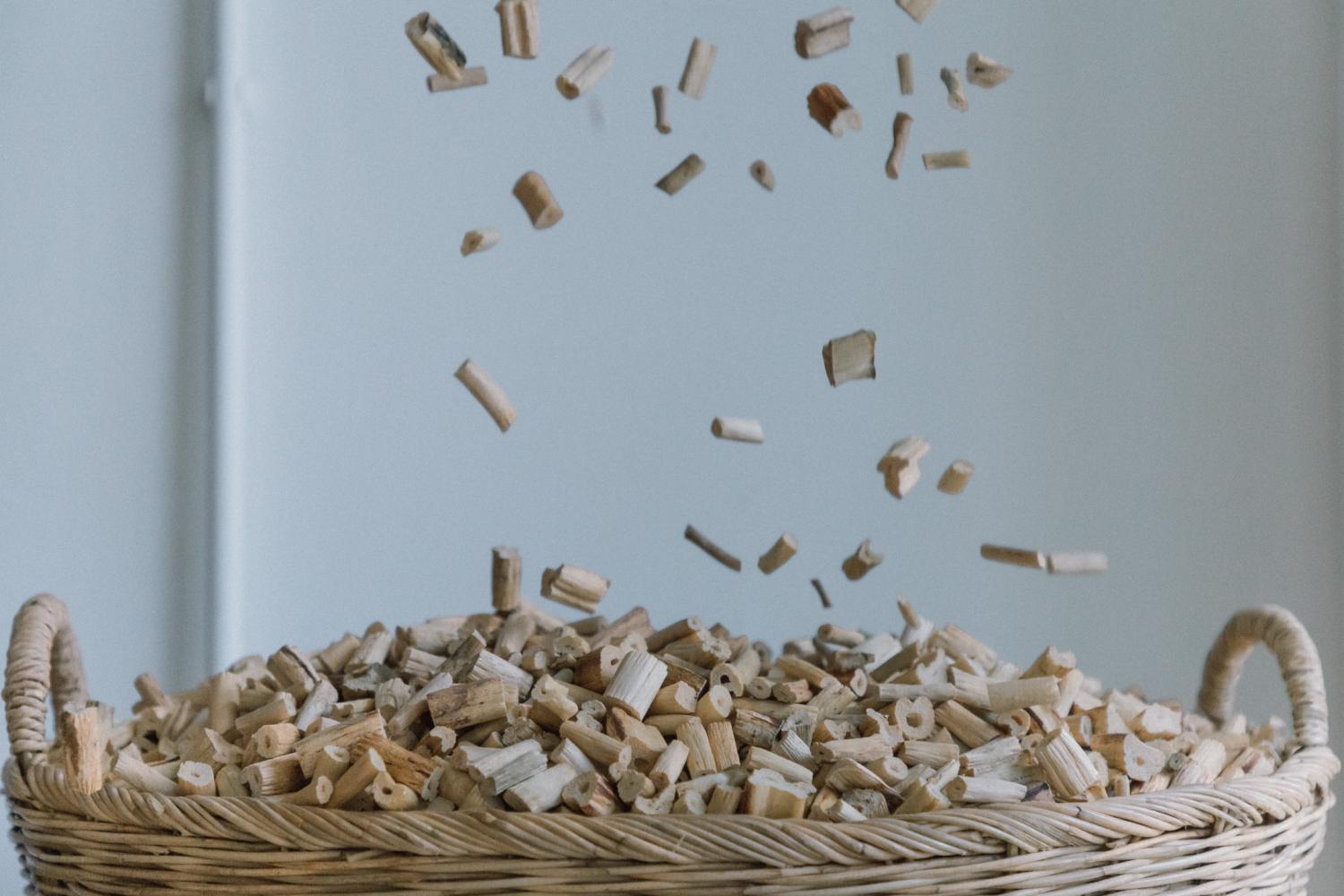 So when she looked at water hyacinths, she saw an opportunity. Her mother, Bussara, offered a hand as they took some hyacinth plants from a canal. They used only the stalks and washed them before cutting them into small chunks. They sun-dried the stalks until each became dry and brown.

Thitima experimented by putting a glass in a box filled with the dried stalks chunks. She then dropped it from the 2nd floor of her home and when she opened the package, the glass was in one piece.

"The texture of dried stalks is like sponge. They are light and can function as a shock-absorbing material. Moreover, they have a mild fragrance," she said.

She then used dried hyacinth stalks to pack her products. She posted photos on her personal Facebook and a group titled Greenery, for people who support sustainable living. The post became a hit and was shared by 5,000 people and Thitima received many requests for purchasing.

Thitima spent about four months experimenting before she introduced the natural box filler as a commercial product under the Chva brand.

It soon turned into a family business as her grandmother and younger sister also joined the production process.

"The dried stalks can be reused several times. They can also be recycled. For example, you can use them to cover plant beds to help keep moisture in the soil. For those who raise rabbits or hamsters, you can use Chva products as soft bedding in the bottom of a cage," she said.

At present, Chva can produce up to 1,000kg of dried hyacinth box filler per month. One kilogramme of filler is made from 10kg of fresh hyacinth. The freshly cut hyacinth stalks are sold to her by locals and farmers living nearby daily. They earn an extra income of up to 400 baht a day, she said.

In the future, Thitima plans to have a parabola dome which will help double production capacity to 2,000kg a month.

Since the product is not hard to make and anyone can produce it from water hyacinth as Chva does, Thitima does not mind competitors.

"The demand is quite high, especially among those who produce organic or green products. The market is big enough for newcomers. For me, I will not stop at water hyacinth. I will introduce more options of environmentally-friendly packaging fillers in the future," she said.

Chva products are available via Facebook. The price is 155 baht a kilogramme. Visit facebook.com/Chva.Brand or call Thitima at 089-690-4299. 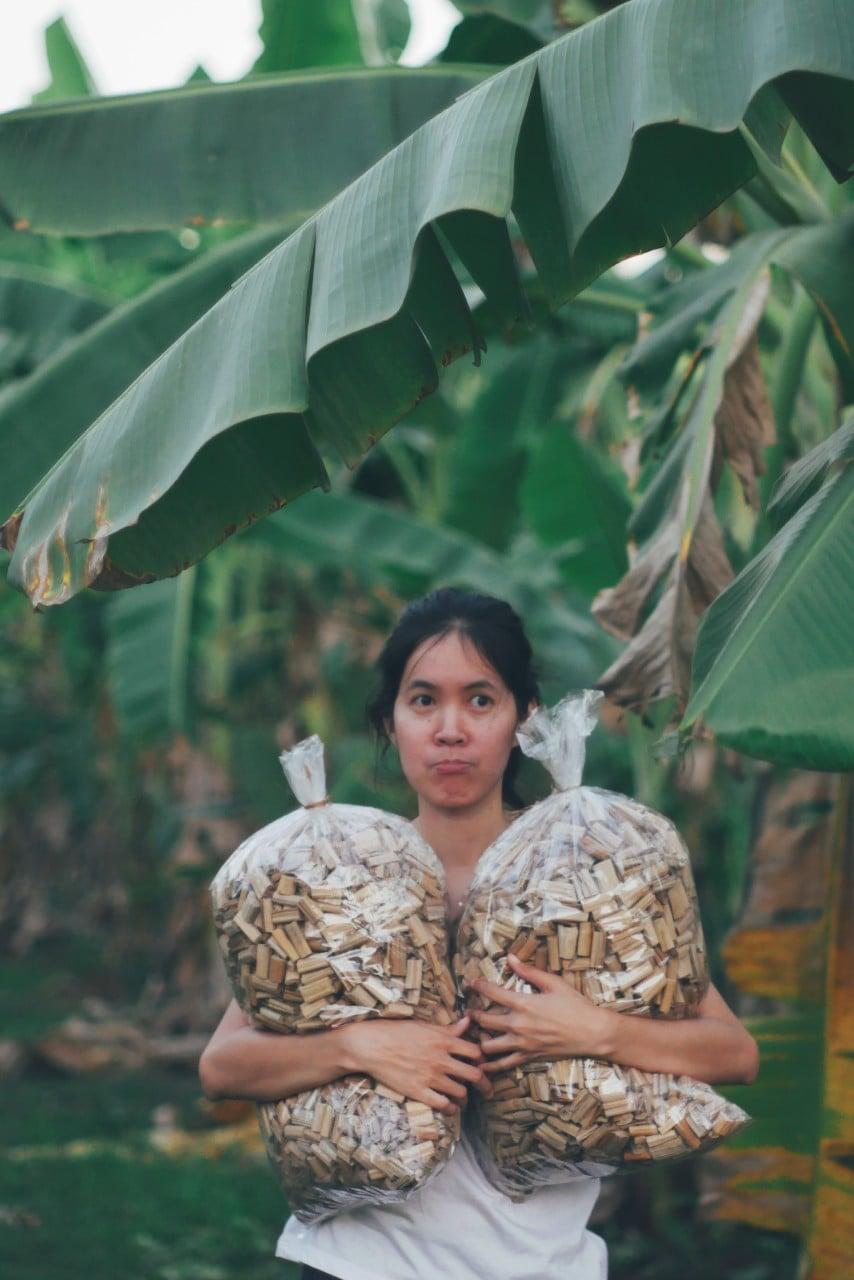 A woman with 2kg of Kluay Chuay Lok. The price per kilo is 100 baht.

The northern province of Sukhothai features one of the largest banana plantations in the country. Farmers sell the bananas and fresh leaves, however, dry leaves and unwanted midribs are seen as waste.

Instead of being trashed, the materials have now been turned into natural fillers by the brand Kluay Chuay Lok. The term means Bananas Save The World.

"The brand was created when we were searching for a solution for our e-commerce business. Instead of using bubble wrap packaging, we wanted to have alternatives," said Thanawut, 31.

The three learnt about dried water hyacinth stalks being used as box fillers. That triggered them to look around banana plantations in their community. They found that the midribs of dried banana leaves were soft and tough, and had a texture like sponge.

They spent about four months mastering their product to ensure that dried banana midribs can protect goods inside a shipping box. One of their experiments involved packing an egg in a cardboard box filled with chunks of dried banana midribs. The box was thrown from a balcony of the 2nd floor of a home. When they opened the box, the egg was safe. 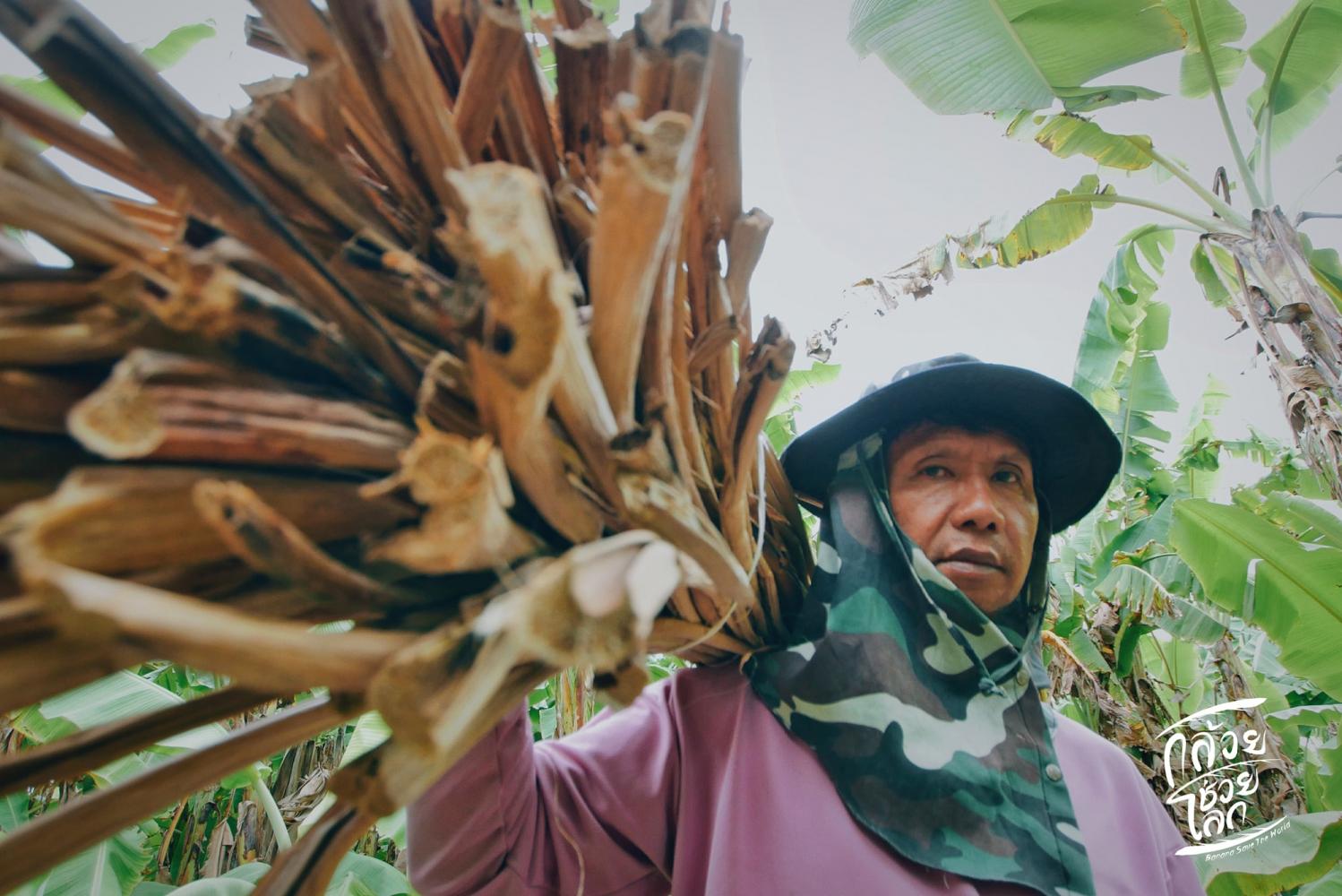 A farmer with dry banana midribs.

"Our product can be reused many times. It can also be used in a garden to cover plant beds," he said.

At present, Kluay Chuay Lok buys dry leaves and midribs from farmers in their community. They can produce up to 200kg a month.

"Our business is still young so production capacity is not high. What we want is to offer an affordable green product that will not add cost to online vendors. We want them to stop using bubble wrap and consider using our environmentally-friendly fillers," he said.

The price of Kluay Chuay Lok filler is 100 baht per kilogramme.

In future, the group plans to make use of the tip of banana leaves, which are leftover after farmers cut the fresh leaves for sale. They plan to convert it so as to be like shredded paper.

"Our green product not only helps reduce waste in our community but also provides income to local farmers," he said. 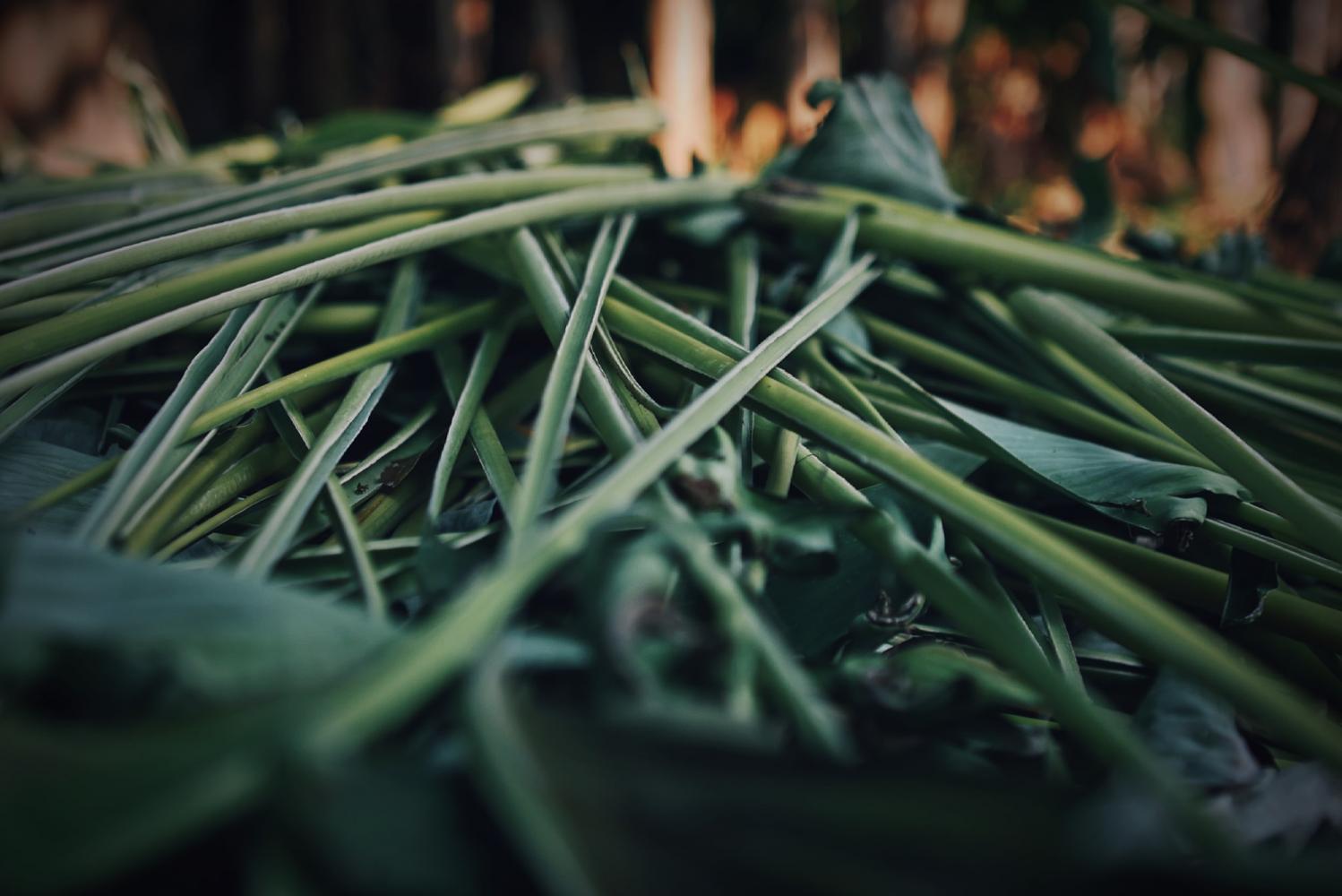 Unwanted banana midribs can be turned into filler. 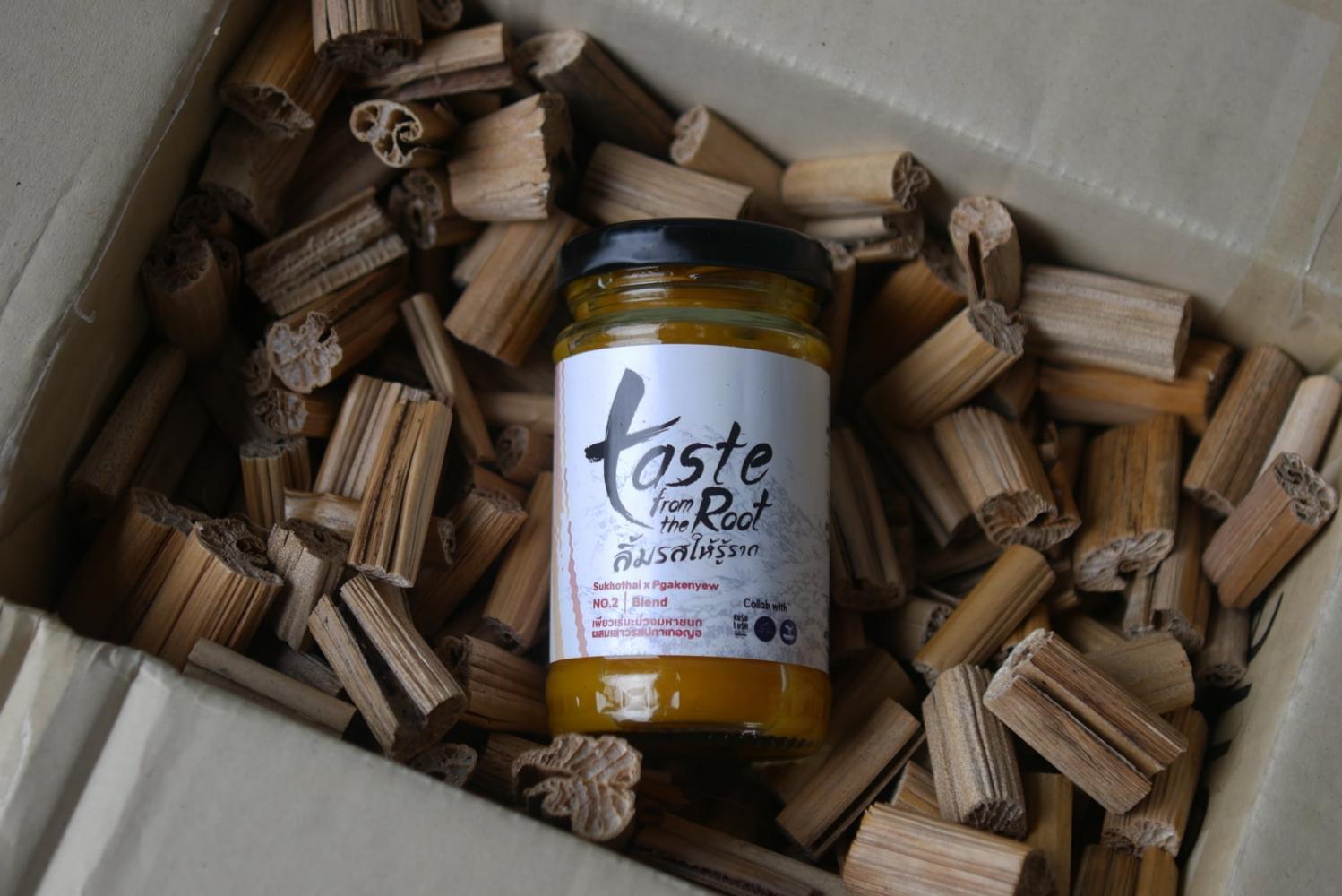 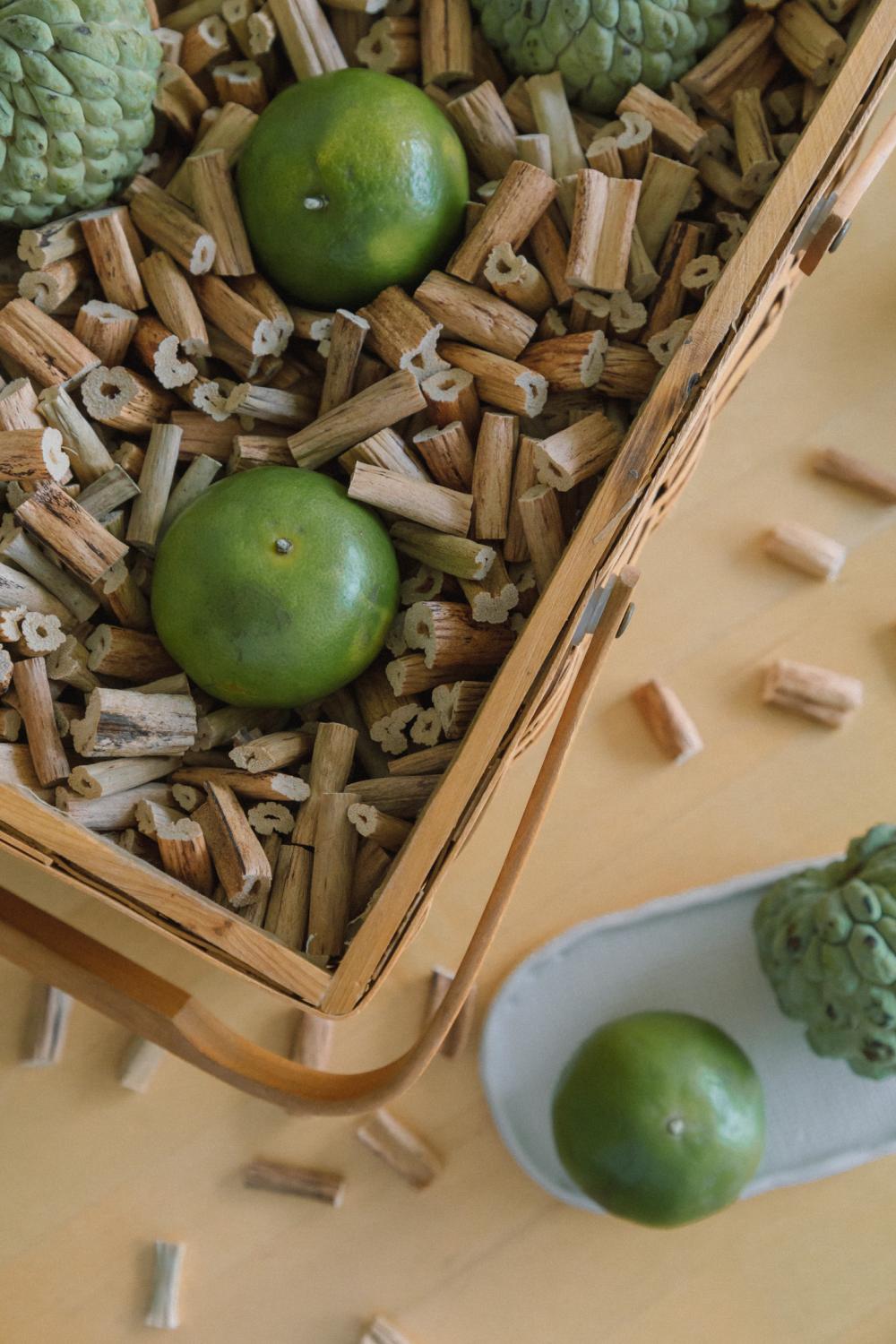 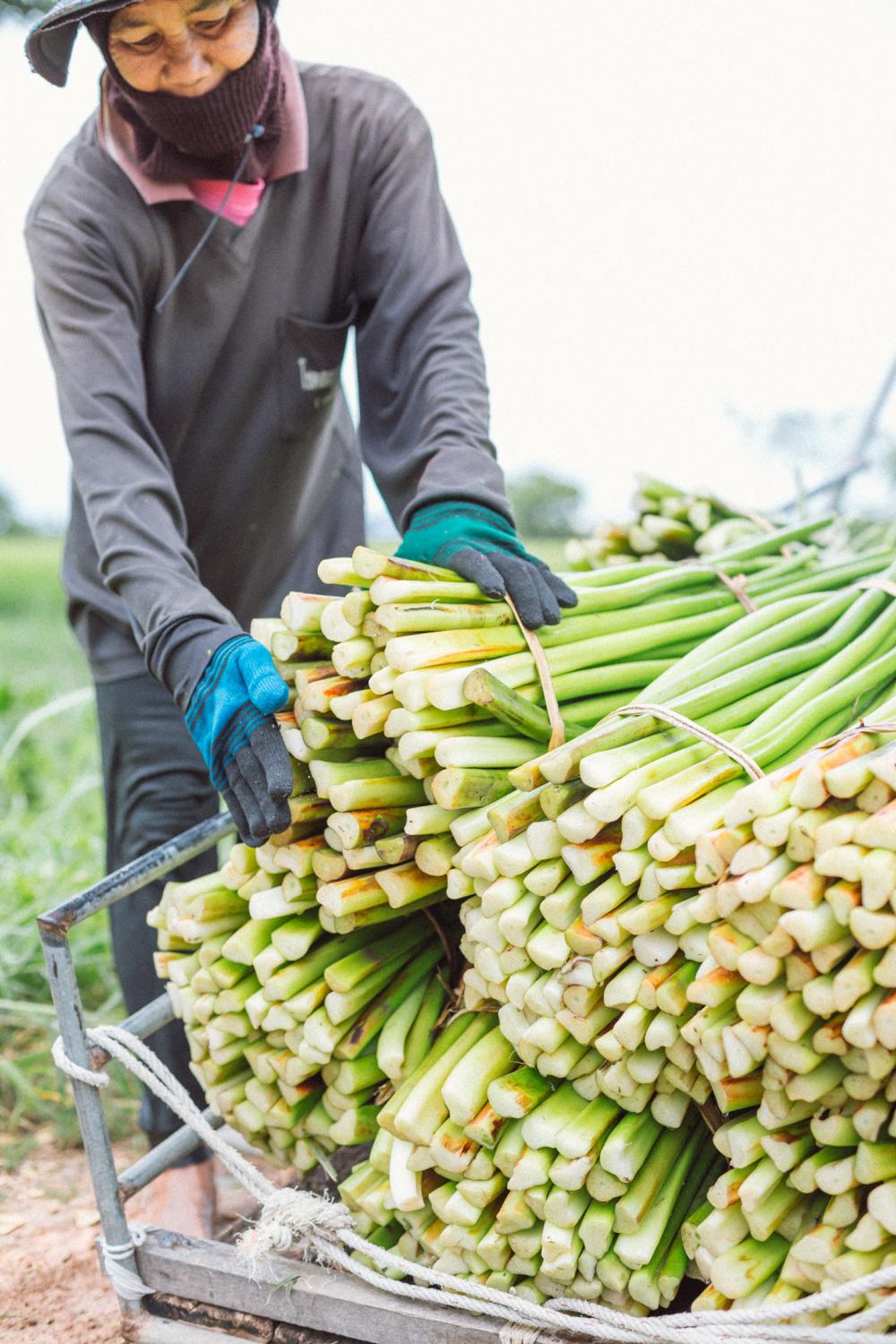 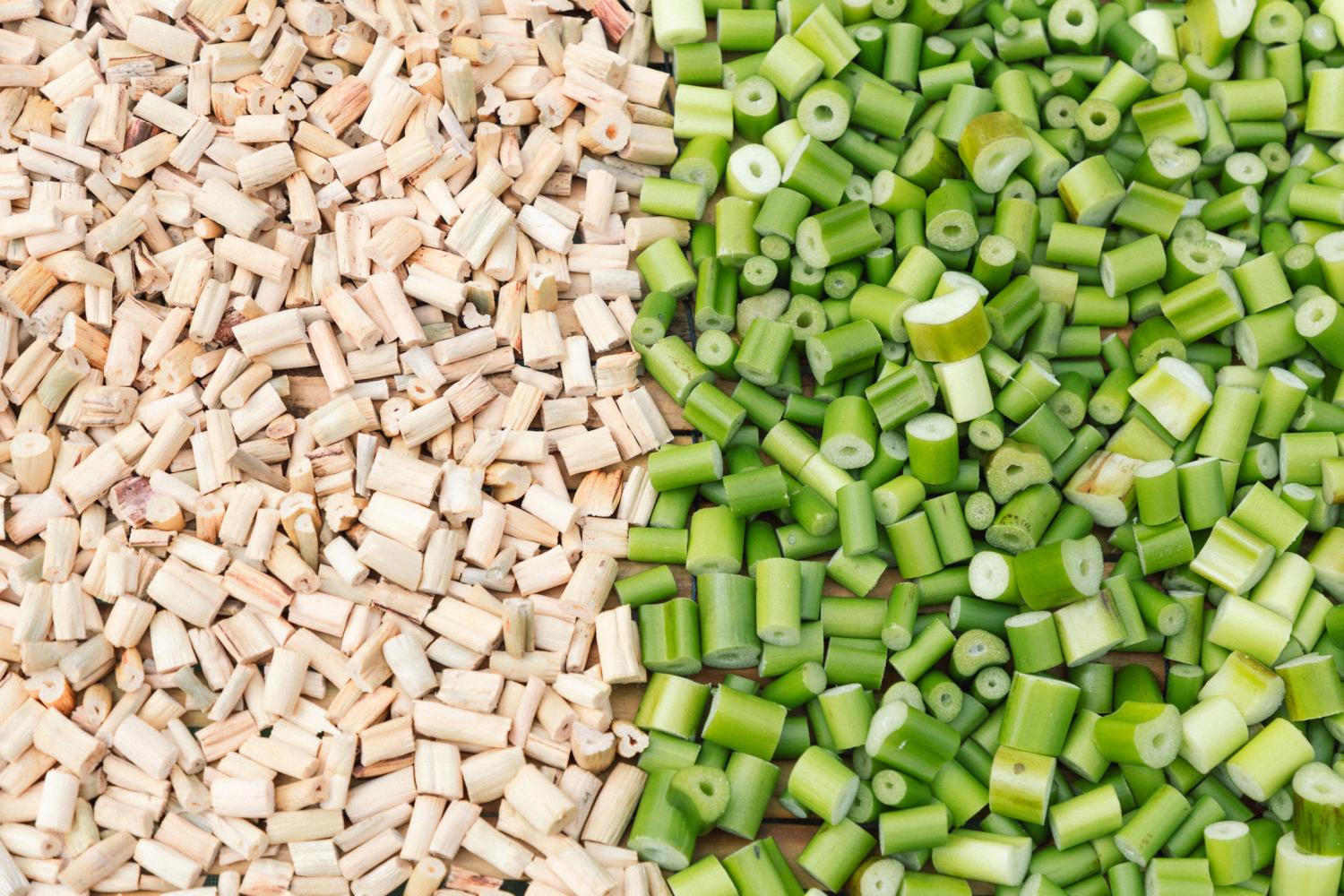 One kilogramme of dried hyacinth stems is made of 10kg of fresh stems. 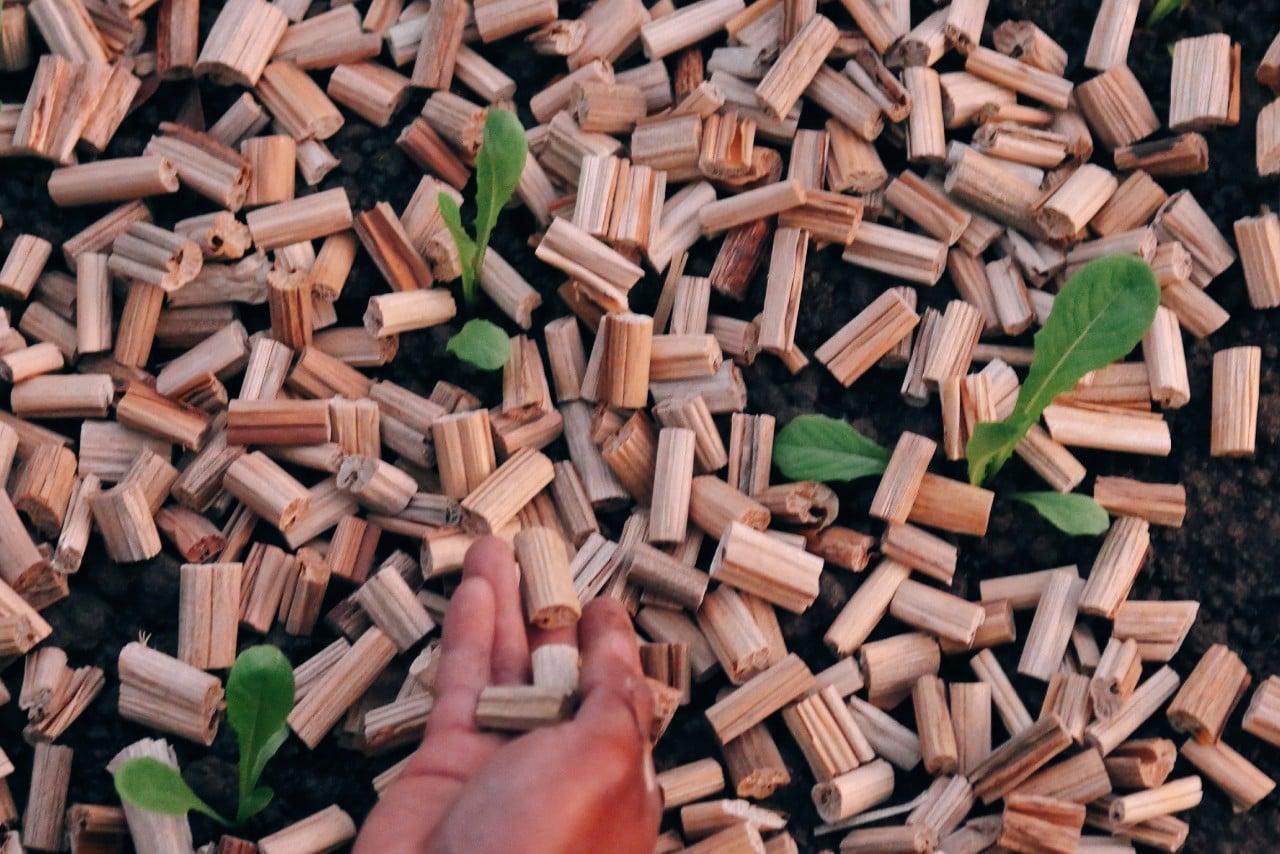 The dried banana midribs can be decomposed or used for carpeting a plant bed.