Windows into the past
Life
Social & Lifestyle

Windows into the past

Despite the government's relaxation of lockdown measures, recreational venues remain restricted and many office workers are still working from home. To satisfy bookworms and those interested in Thailand's rich history and wisdom, the National Library of Thailand (NLT) is arranging an online exhibition named "10 Books From The Valuable Ancient Documents Of The National Library".

Available on mobile.nlt.go.th and the NLT Library app, this exhibition is showcasing recreations of historic khoi paper manuscripts known as Samut Thai in order to educate future generations about Thai cultural heritage and conserve ancient documents.

"Back in 2018, Her Royal Highness Princess Maha Chakri Sirindhorn suggested that we create a book exhibition that displays both printed books and original documents to educate people about Thailand's roots," said Dipwat Watjarasiriamon, director of manuscript and inscription collection at National Library of Thailand.

"The project began last year and our team of experts have selected 10 rare prints and manuscripts that are well-liked by readers and feature interesting content as well as astonishing illustrations that highlight the beauty of Thai cultural heritage. Due to the Covid-19 pandemic, we've shifted our attention to an online platform this year so that people of all ages can access this e-book exhibition from home." 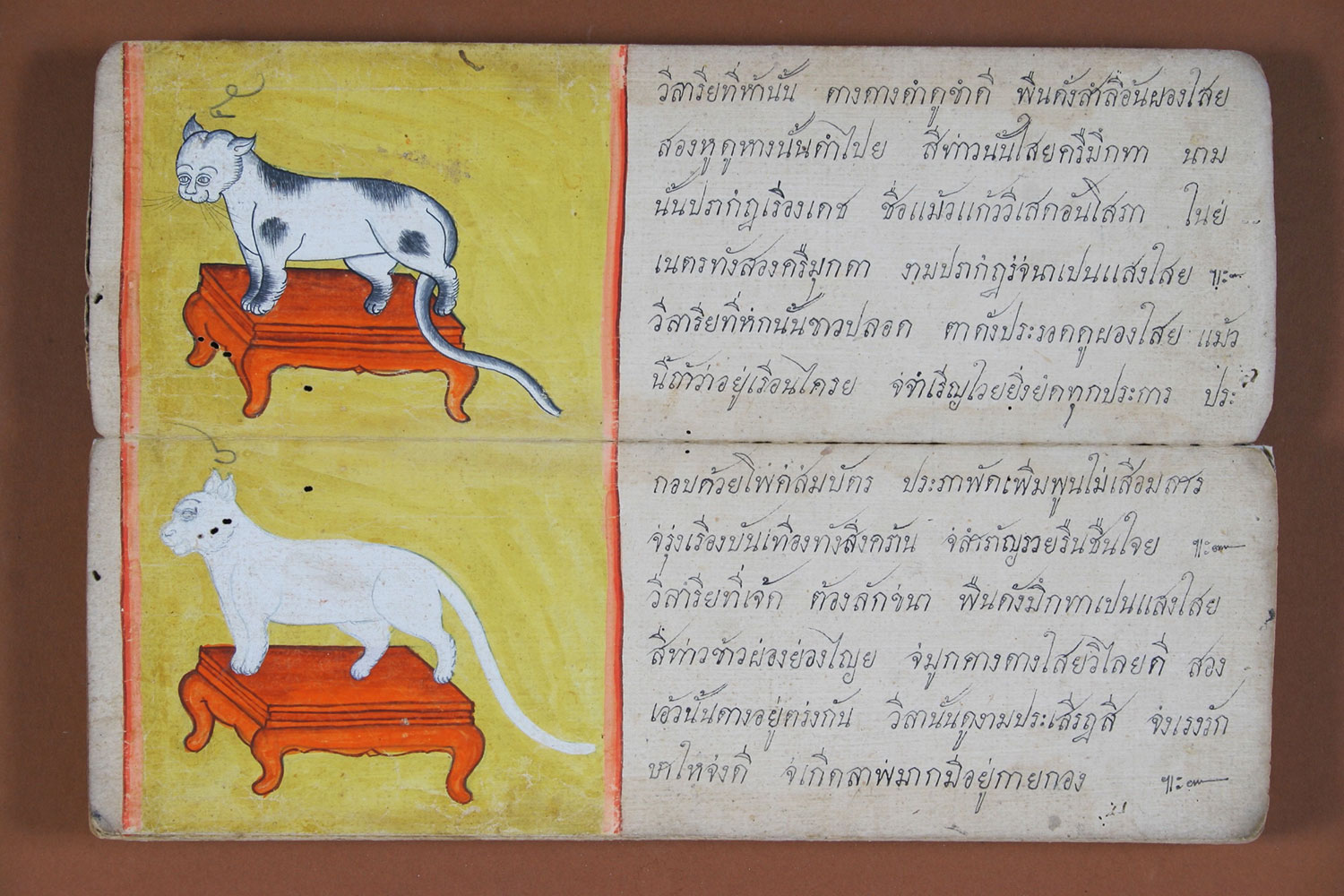 On a digital bookshelf, you can find Tamra Maew in a pictorial calendar version and a hoary manuscript with stunning illustrations of 17 auspicious cat breeds and Thai poetic verse. A feline is intelligent, flattering and devoted, making it a popular pet and special gift.

In the past, Thais believed that owning an auspicious cat would bring fortune and prosperity to the owner. For example, Maew Nilrat with black eyes, nails, tongue and teeth brought wealth and protected its owner from harm. Maew Supalak with a copper body, nails, and ruby-shaded and white whiskers was believed to bring prestige while Maew Mares with its white nails, whiskers and eyes as well as nimbus-like hair brought happiness and auspiciousness.

According to Prince Damrong Rajanubhab's novel, Siam adopted the traditional healing arts of India which Brahmans practice during their pilgrimage to make muscles and tendons supple, improve blood circulation and raise their spirit. 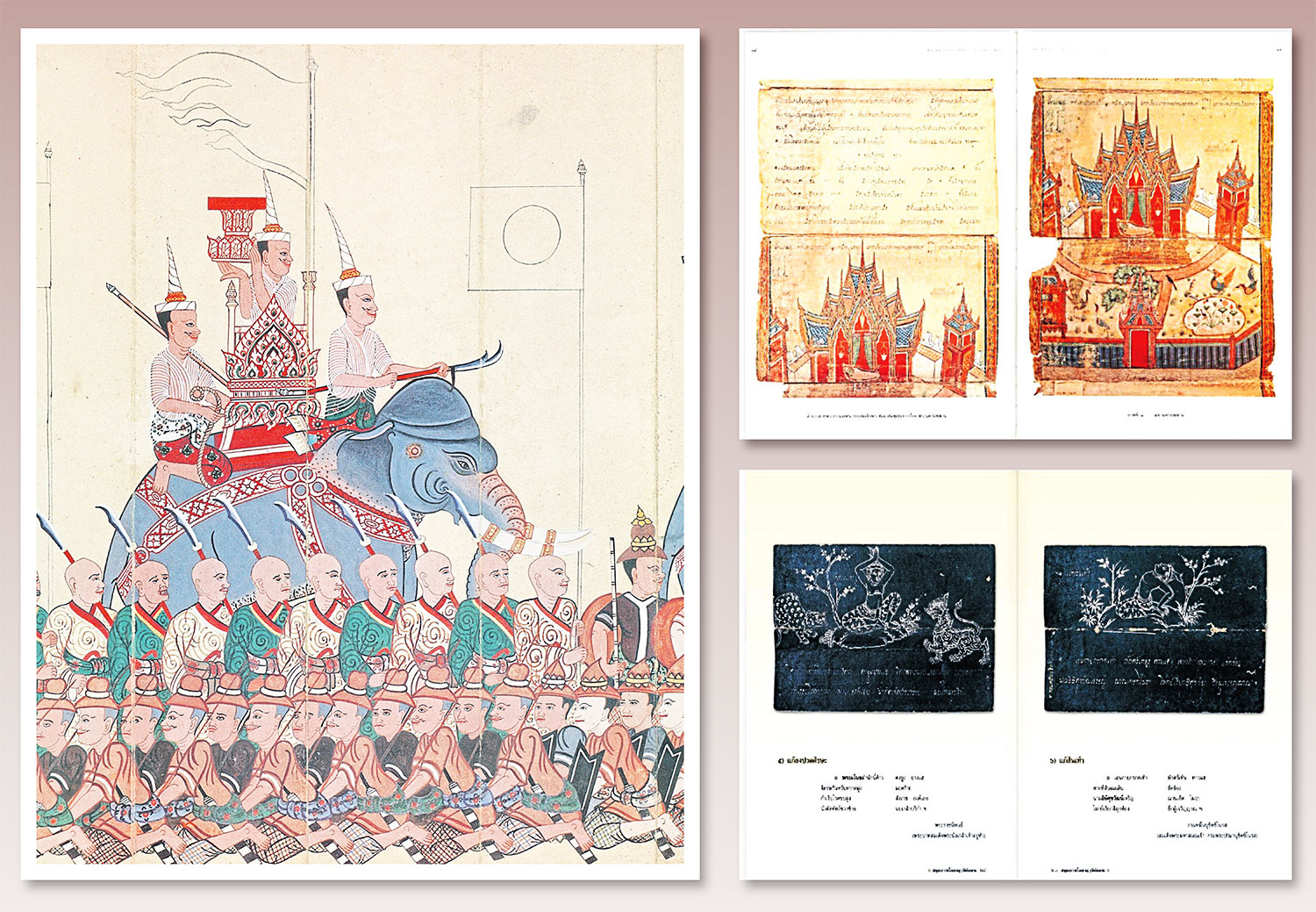 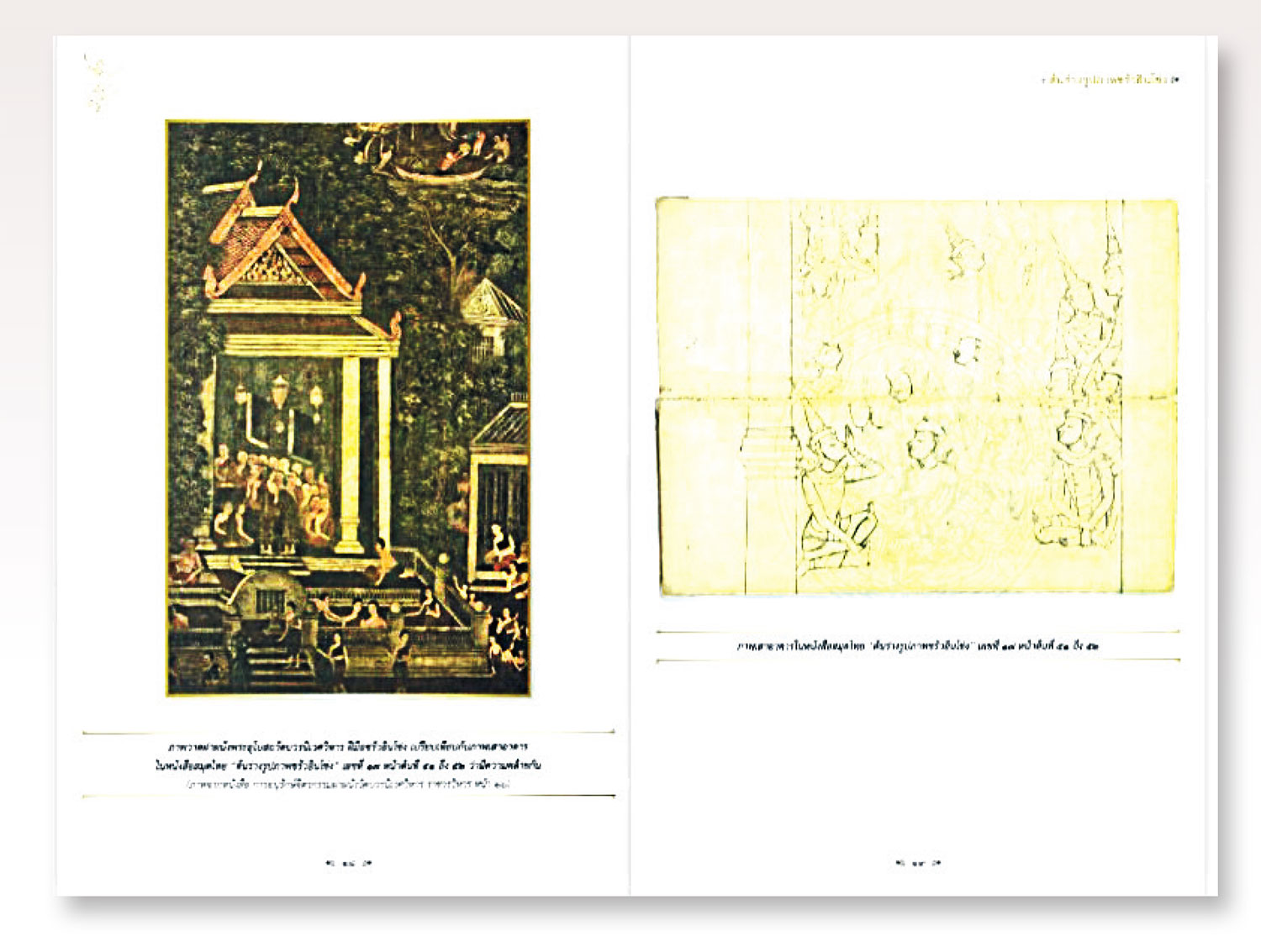 Phra Samut Tamra Phaen Khotchalak is the oldest elephant book with Khmer-Thai and Thai-Pali descriptions from the Ayutthaya era. Pachyderms became an integral part of Thai culture during the Sukhothai dynasty.

Based on King Ramkhamhaeng's inscription from 1292, they are clever, strong and beautiful, making them ideal for training as a king's chariot. This manuscript was created in the reign of King Borommakot to illustrate the attributes of auspicious elephants and teach how to tame and train them, following Hindu beliefs.

For instance, Phra Aiyara has a towering mountain-like body, long ivory, large star-liked eyes and a bow-like back. Meanwhile, Chang Mongkol Hatee has a dark purple body and Chang Buntarik has a fragrant white lotus-like body, a big head and pure white tusks.

Based on an ancient book written during the reign of King Rama III, Samutphap Sat Himmapan boasts 73 drawings of mythological animals from Himmapan forest. This pictorial book was issued in 2017 to commemorate the royal cremation ceremony for King Bhumibol Adulyadej after the base of the royal crematorium was designed to resemble the Anodard pond and adorned with sculptures of Himmapan creatures. 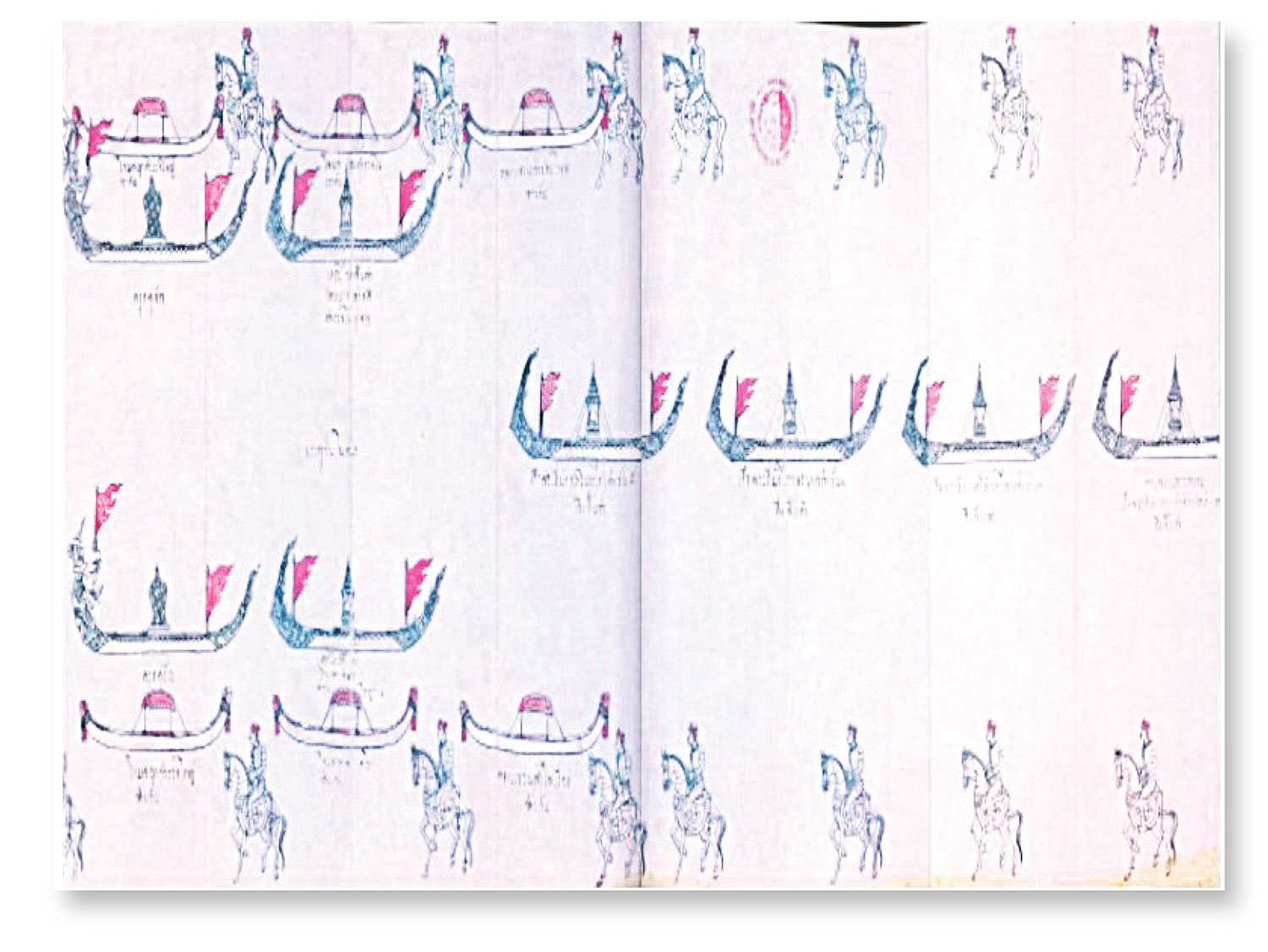 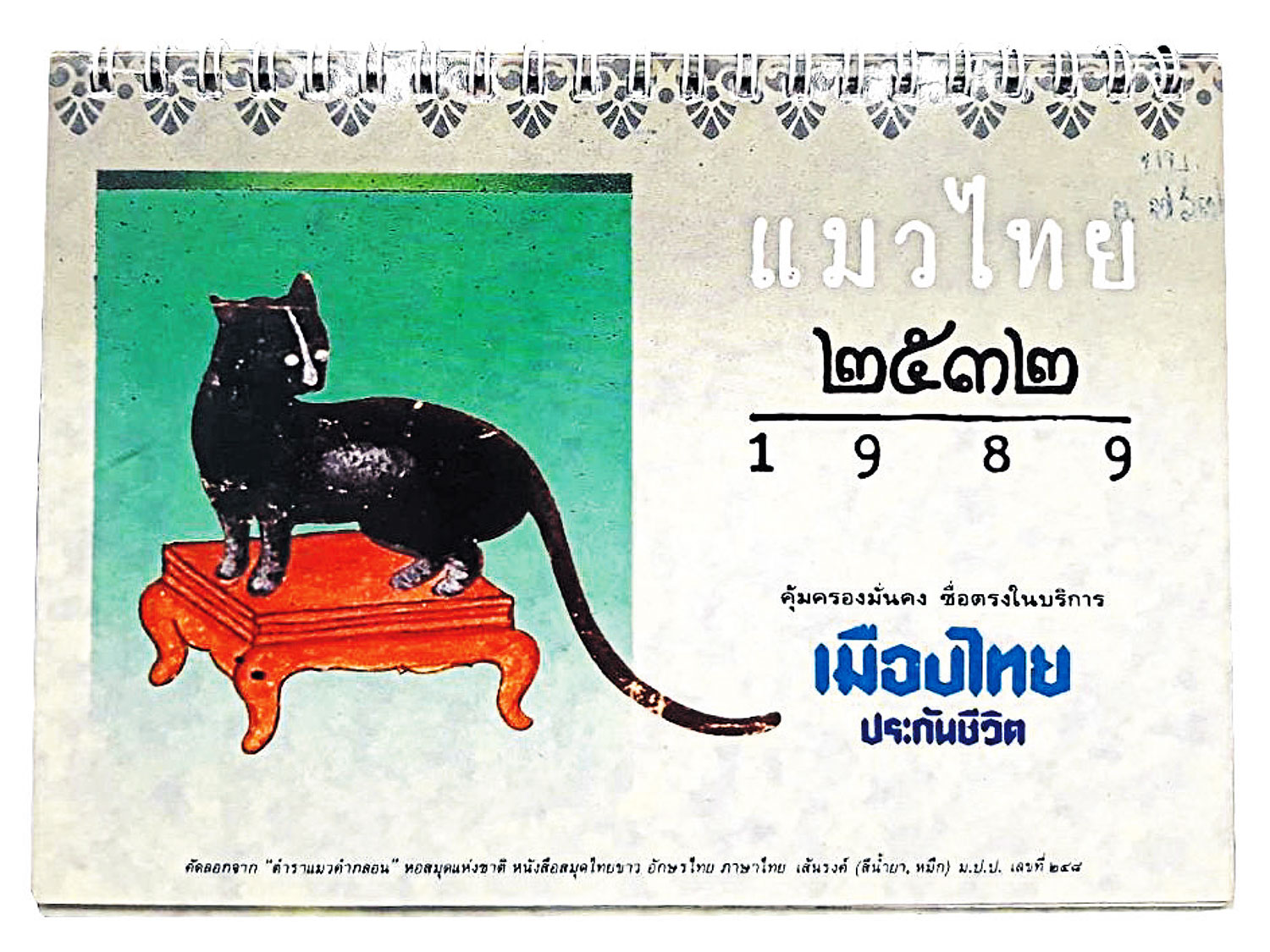 Following Buddhist beliefs, the Himmapan jungle stretches over the foot of Mount Meru, home to more than 1,000 mythical creatures. In Thailand, all Himmapan characters have been extracted from imagination and the majority are a combination of terrestrial and aquatic animals or humans and beasts.

For example, Nok Thanthima has a bird head, peacock tail, human limbs, ox ears and crocodile eyes, while Kinnorn and Kinaree are a mixture of humans and birds and Kodchasi is a hybrid of a lion and elephant.

Also on view is a pictorial manuscript depicting King Narai the Great's royal march to Wat Yom in the former capital of Ayutthaya to perform a religious ceremony.

After that, visitors can enjoy a historic cruise through a pictorial manuscript of the royal barge procession during the reign of King Narai. It features four large throne boats, each of which is driven by 80 oarsmen with a gold-gilded horse-like bow. Both processions represent Siam's might.

Based on the manuscripts from the late Ayutthaya and Thon Buri periods, a series of Samutphap Traiphum depicts Lord Buddha's life, the Himmaphan forest, and the city of enlightenment and hell as well as Vessantara Jataka and Mount Meru to highlight the principles of Buddhism and Thai traditions.

The 160-page book titled The First Drafts Of Krua In Khong will transport readers back to the reign of King Rama IV when Western culture expanded to Siam. 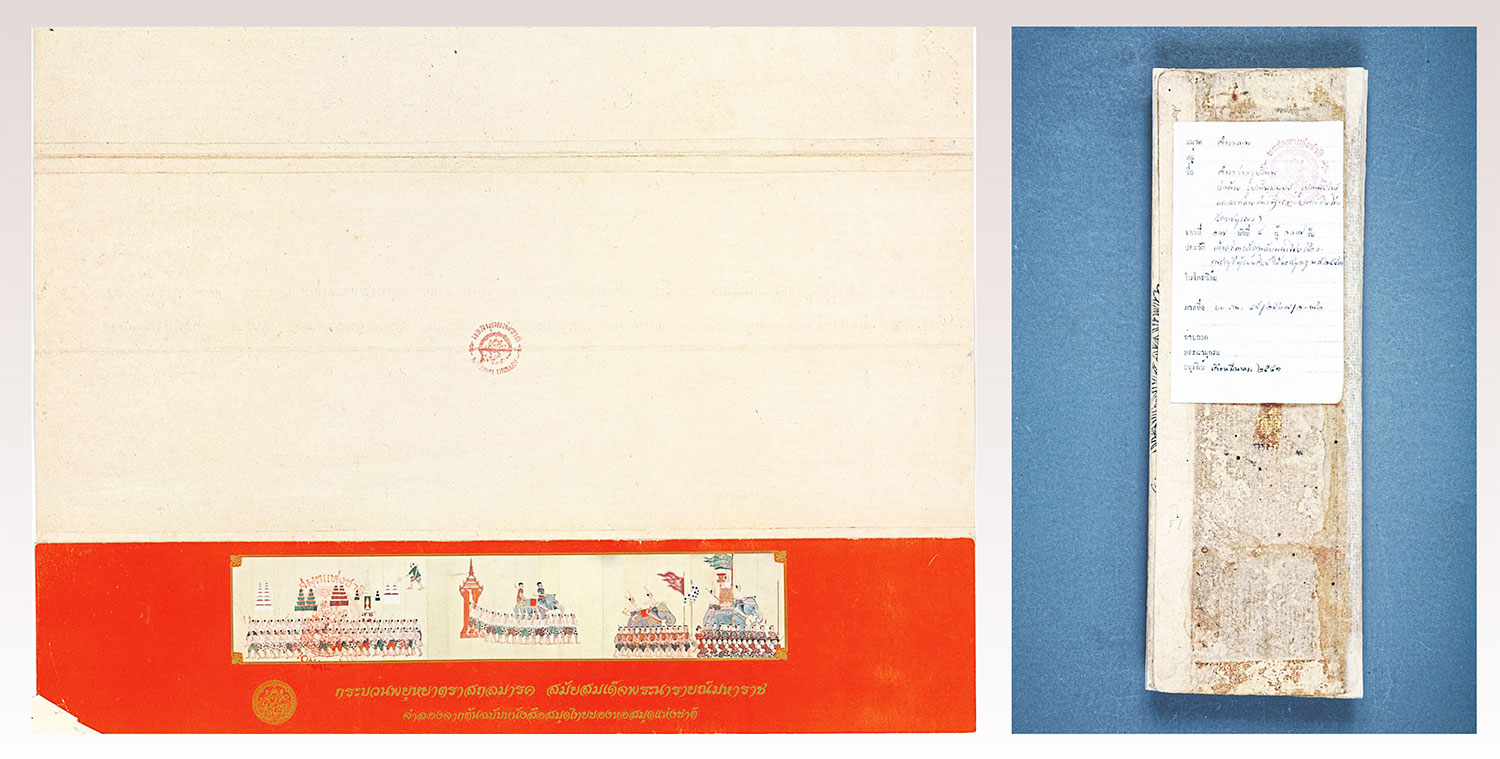 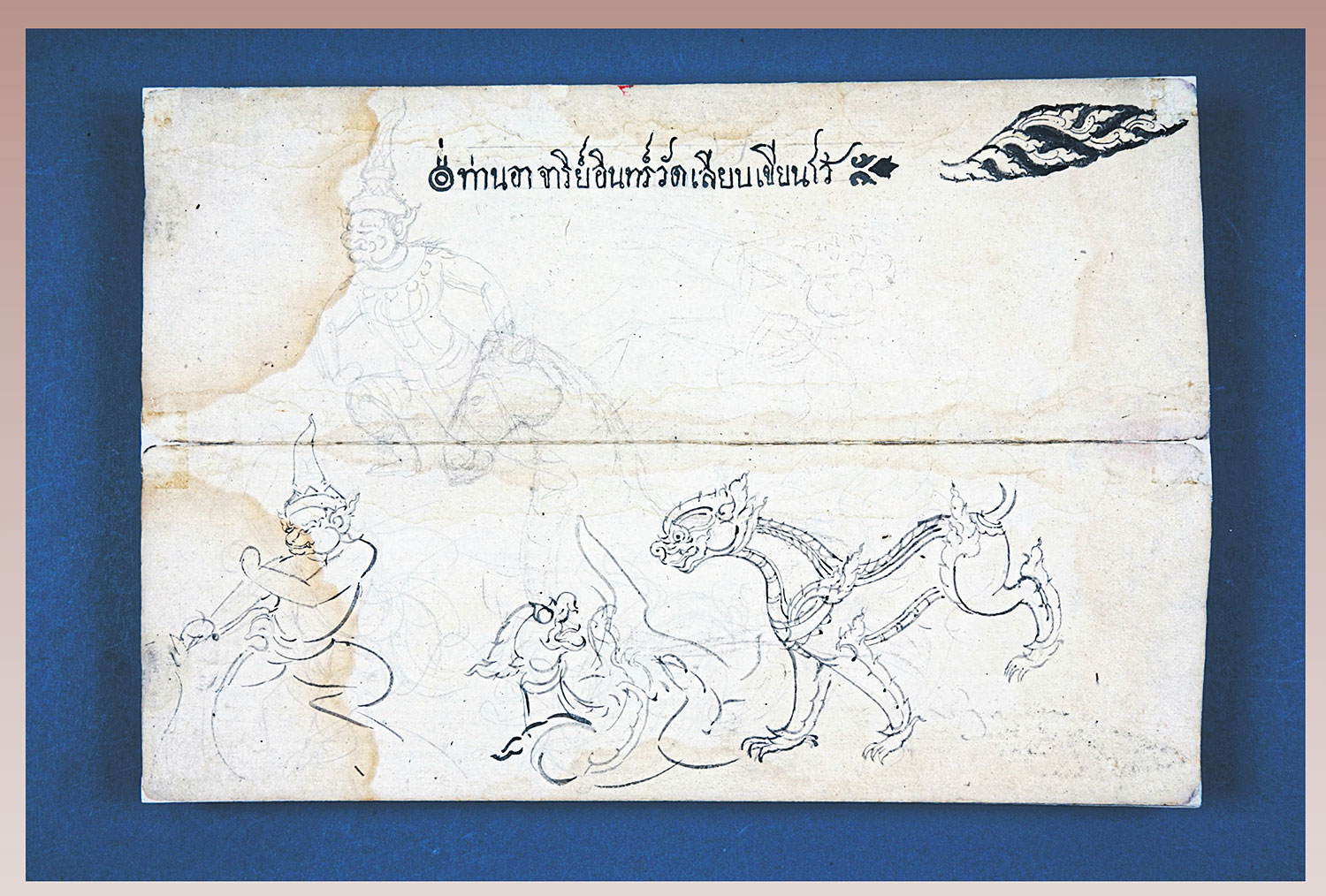 Samutphap Pritsanatham is a picture book about Buddhist teachings and enlightenment meditation. Using corpses in various condition to depict the cycle of life and death and a lotus, which is born in mud but sprouts and blooms over water, to represent intellect.

The reading hour ends with the Buddhist literature Supriti Dhammaraj Jataka Khamluang, which is believed to have been written during the Ayutthaya period. It recounts the story of Supriti Dhammaraj, who gave his three sons to a Brahman in order to attain nirvana.

"To promote the value of ancient books, we're preparing a new project to showcase some rare books such as a medical treatise during the reign of King Rama V and the Three Seals Law of Ayutthaya to promote the value of ancient books. Moreover, we're working to improve our e-book database, which contains more than 1,000 inscriptions, dhamma cabinets and other manuscripts so that people can enjoy our services from home," Dipwat said.