Carrying on the legacy

Amid the pandemic and gentrification, heirs of family-run restaurants in Bangkok are forging new paths to save old recipes

However, when Covid-19 took the life of its founder, Chanchai Tangsupmanee or Hia Ouan earlier this year, his son Adulwitch Tangsupmanee had no choice but to become the second-generation operator of this legendary stall.

"I had never planned to inherit the business but after I graduated in communication arts from university, I began helping my father full-time and found that I could earn a living," Adulwitch recalled.

A kitchen is an unlikely place to dig for treasure but for Adulwitch and many families, it is a place where parents pass down recipes to their children through apprenticeship. Usually, when parents pass away, they leave behind many legacies but intergenerational cuisine secrets are rarely found except in childhood memories.

Since the third wave of the pandemic began in Thailand, the death of veteran chefs who paved the way for street food culture has brought about public grief. These restaurants have served classic dishes for generations.

Adulwitch is no exception. His father never gave him cooking lessons but he had first-hand experience of helping him after school. He remembered that his father knew from the frying sound if belly pork was perfectly crispy. 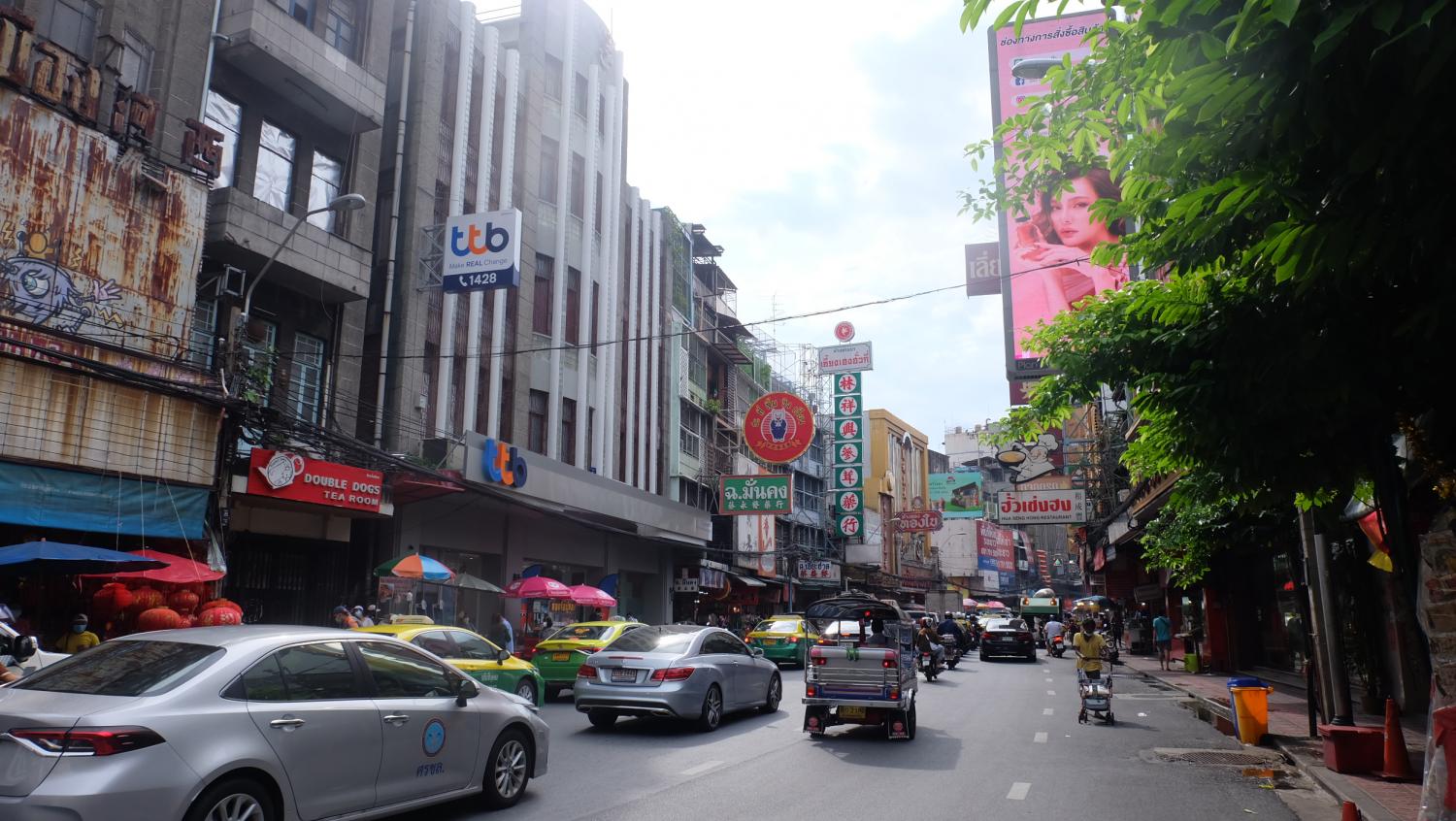 In recent years, Yaowarat has been subject to urban development, raising concerns about the local way of life.

Adulwitch said his late father worked for an uncle who sold noodle soup in Yaowarat. When he started a family, he asked for permission to run his own stall. He later moved from the opposite side to the front of the cinema.

"My uncle and my father were one of those who began selling street food here. My father told me that there used to be a tram there. Also, by the time I was born, Peking opera no longer existed at the cinema," he said.

When asked about the impact of gentrification on the community, Adulwitch said it has changed gradually and not abruptly. He will continue to follow in his father's footsteps but adapt to the change caused by the pandemic.

"The government is once again allowing dine-in service but the number of walk-in customers has declined. It is not lively," he said. 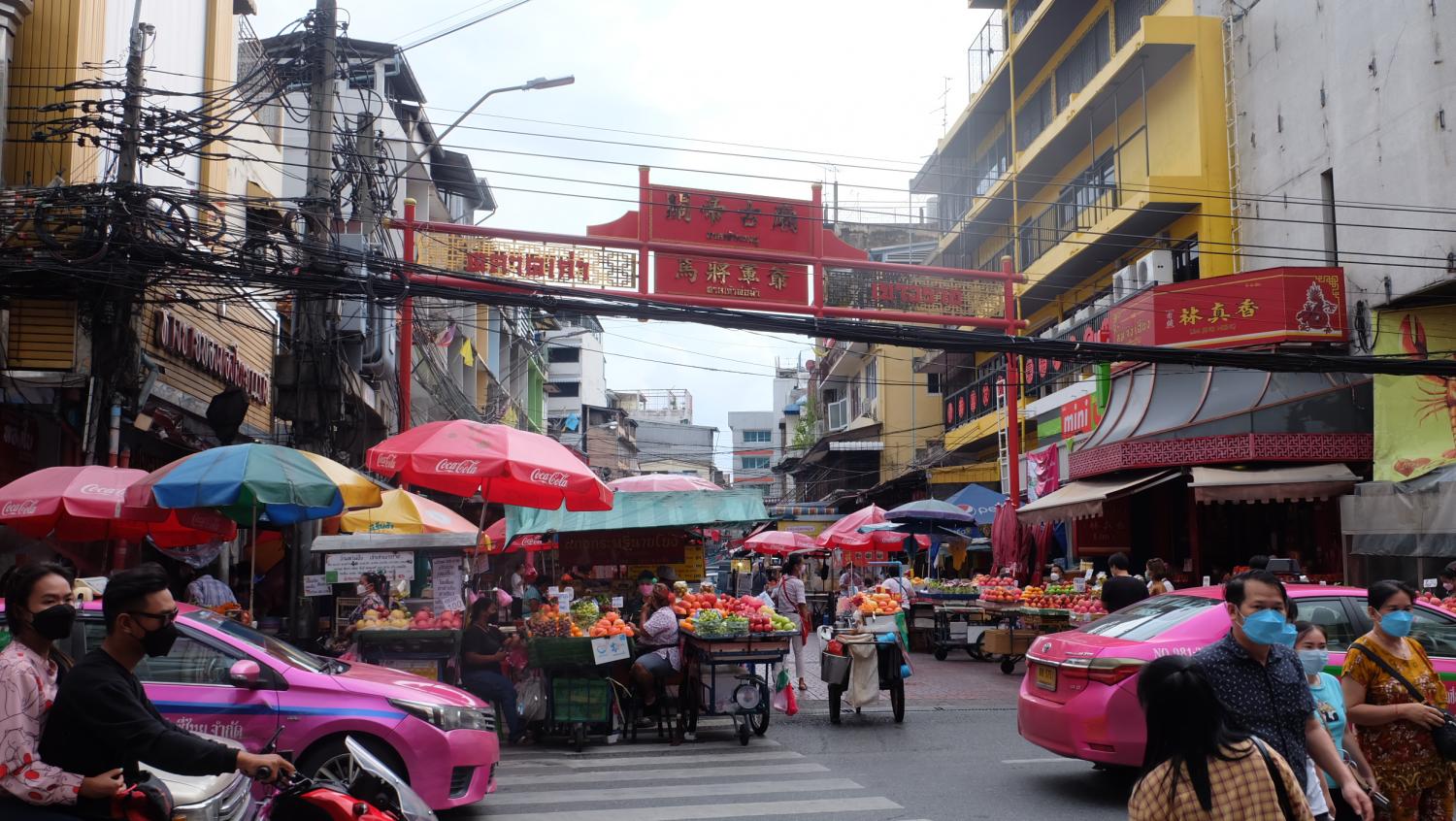 With restrictions easing, life is going back to a new normal but some business operators said the market remains in the doldrums.

Nestled in Soi Nana in Yaowarat, Ji Seng Heng has sold Teochew pot-stewed duck for over 60 years. The made-to-order dishes are known for their tenderness, salty and sweet flavour, and scent.

Sarisa Saetang said her grandfather handed down the business to her uncle, father, and mother. In her memory, her father stewed duck in a special stainless pot that can hold up to 10 people.

"The pot used to cope with high demand on special occasions, including the Chinese New Year, the Ghost Festival, and the Qingming ceremony. But the business was abandoned when I was 13 or 14 years old," she said.

Sarisa did not plan to inherit the business but eventually promised that she would carry on the tradition before her mother passed away. While her sister mastered the art of cooking, she helped her family taste and sell dishes. In the past, she commented on her mother, who kept muttering but eventually she listened intently and improved.

"She taught us to work during childhood. It may have seeped into us. I studied hotel management at university but never took any cooking lessons. I think experience can help maintain the family recipe," she said.

Nevertheless, maintaining a legacy is not easy. Sarisa said it is a new beginning. Some customers had thought the family would close the shop because her mother once said nobody would take over when she had passed away. Today, only those who use social media order food.

"We follow our mother's recipe. We taste it all the time because she never used measuring tools. We will give ourselves some time to get the hang of it. Later on, we may offer a course. I don't know how long the business will last but I don't want it to disappear," she said.

The shop does not offer dine-in service and the pandemic has reduced the number of walk-in customers. Online food delivery can make up for the losses but it does not allow customers to experience the shop in the flesh.

"In the past, customers came here to interact with our mother," she added. Sarisa Saetang and her sister are now heir to Ji Seng Heng which has offered Teochew braised duck in Yaowarat for over 60 years.

Nevertheless, one restaurant has been able to survive the rough ride. Jae Jook has sold yentafo (pink noodle soup) in Samut Prakan's Paknam for over 30 years. It also offers stewed pork leg on rice.

Jarunee Suetrong and her sister inherited the restaurant from their mother, who would wake up early every morning to prepare pink sauce, chilli paste, and the condiments. They planned to continue the business 10 years ago.

"At the time, I learned the recipe and cooked alongside my mother. Five years later, she took a break. Today, she is no more but her name remains. We will keep on with the tradition," she said.

Jarunee said her restaurant is a household name in Paknam. It attracts customers of all ages, some of whom have been fans since they were students. At first, she thought they would stop coming after her mother died of the coronavirus. However, they continue to show unwavering support. 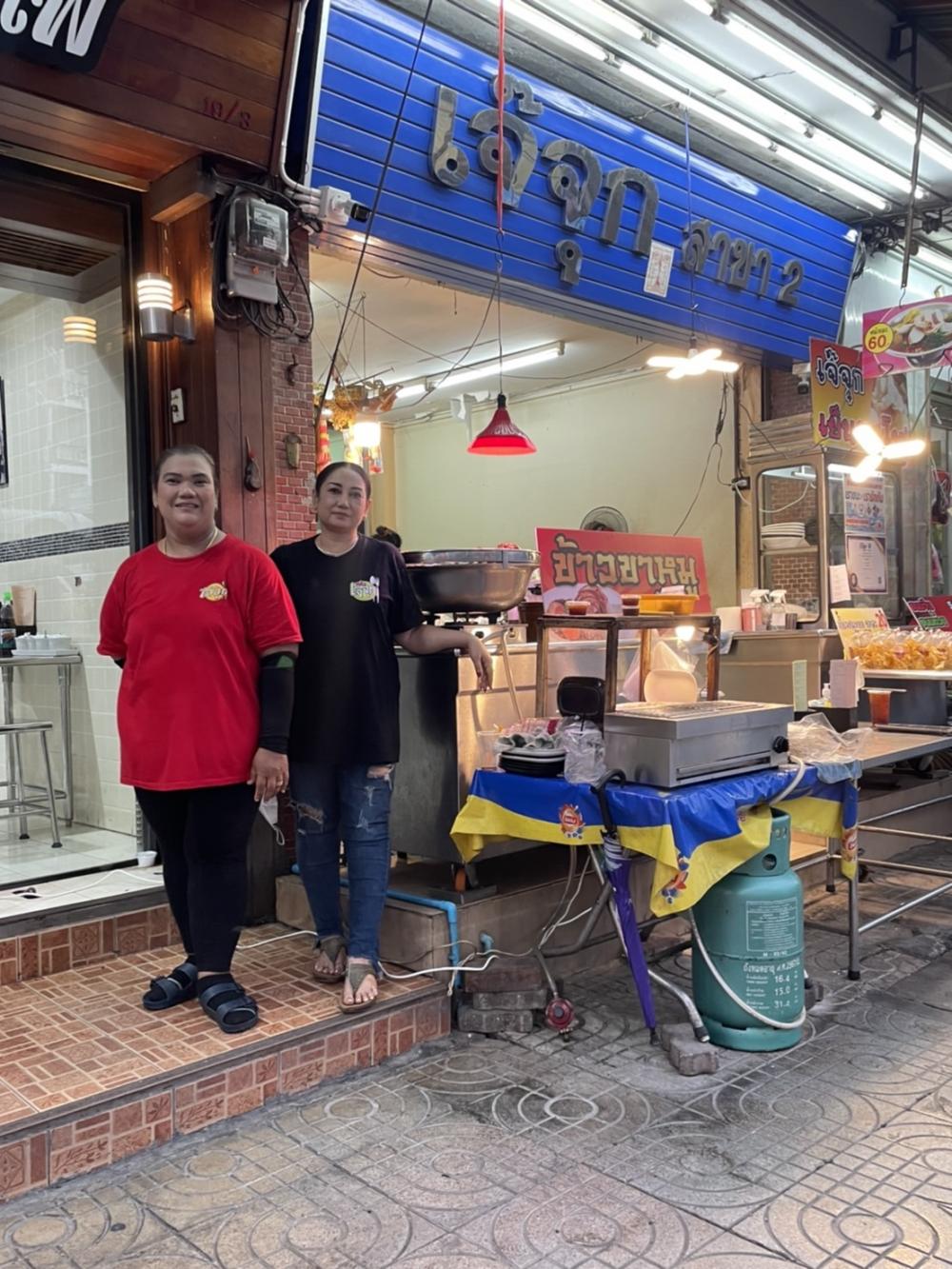 Jarunee Suetrong and her sister took over the family-owned business which has served pink noodle soup and stewed pork leg on rice in Samut Prakan's Paknam for over 30 years. (Photo by courtesy of Jae Jook)

"When the pandemic subsides, our eatery will have more staff. I plan to offer rice roll noodles with brown broth. It is another recipe from my mother," she said.

Jarunee said online food delivery helped amid the government's ban on dine-in service. Surprisingly, customers outside the neighbourhood, such as Samrong, Bangna, and Phra Pradaeng, ordered the food also.

"With restrictions now easing, people show up in small groups for safety," she added.

Asst Prof Aphilak Kasempholkoon, a lecturer at Mahidol University's Faculty of Liberal Arts, said recipes that have been passed down for generations can be classified as intangible cultural heritage. Coined by the United Nations Education, Scientific and Cultural Organisation, the term covers knowledge, skills, practices transmitted intergenerationally.

"It may not be authentic but it must retain its identity. The question is whether these recipes will continue to exist. If descendants inherit them, they will likely survive. However, rebuilding trust or brand loyalty takes time. They may follow the same recipe but customers feel different," he said.

Aphilak said successors must go through this transitional period, which is what their parents faced in those days but they will eventually find their way through trial and error. 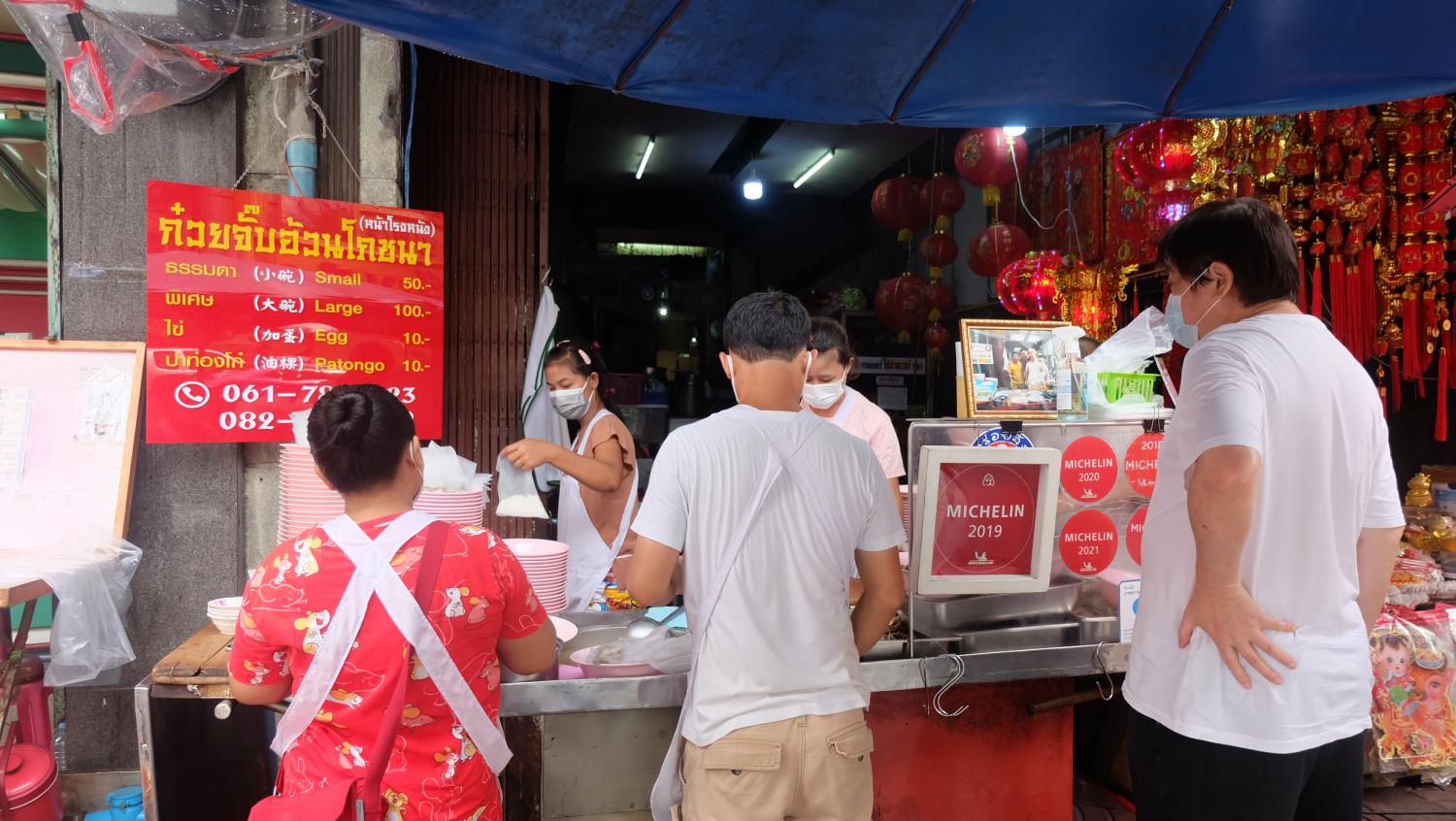 "There is opportunity in every crisis. They can use legacies to develop new products and follow different paths," he said.

Besides the pandemic, gentrification has made an impact on local culture. These legendary restaurants have witnessed a lot of change. Some refuse to adapt while others venture into uncharted territory.

Aphilak opted for the middle path where one moves forward without forgetting its root. He cited an example of shops and restaurants in Yaowarat that compromise by adopting the retro style but ensure sanitary standards.

"It must retain identity, but not necessarily in the same way," he added.