I first learnt about Tamrub Guru, this week's subject of Eating In, via online ads.

The brand's title is a bilingual word play betweeen tamrub, Thai for recipe, and English word guru, which sounds close to ku, a coarse Thai pronoun for I.

Thus I thought it was another uninspiring venture of some wannabe cooking master trying to market their who-cares-whose cuisine during the current economic hardship.

But the brand's registered address struck my attention.

It was the location of the headquarters of Loxley, a neighbouring company in the same hood as our Bangkok Post building.

The corporate head office didn't look to me like a place where anyone would set up a shop selling takeouts. That's why I began to dig in.

It turned out that Tamrub Guru had some interestingly genuine stories to tell. And it all began in a corporate function room on the 18th floor of the building. 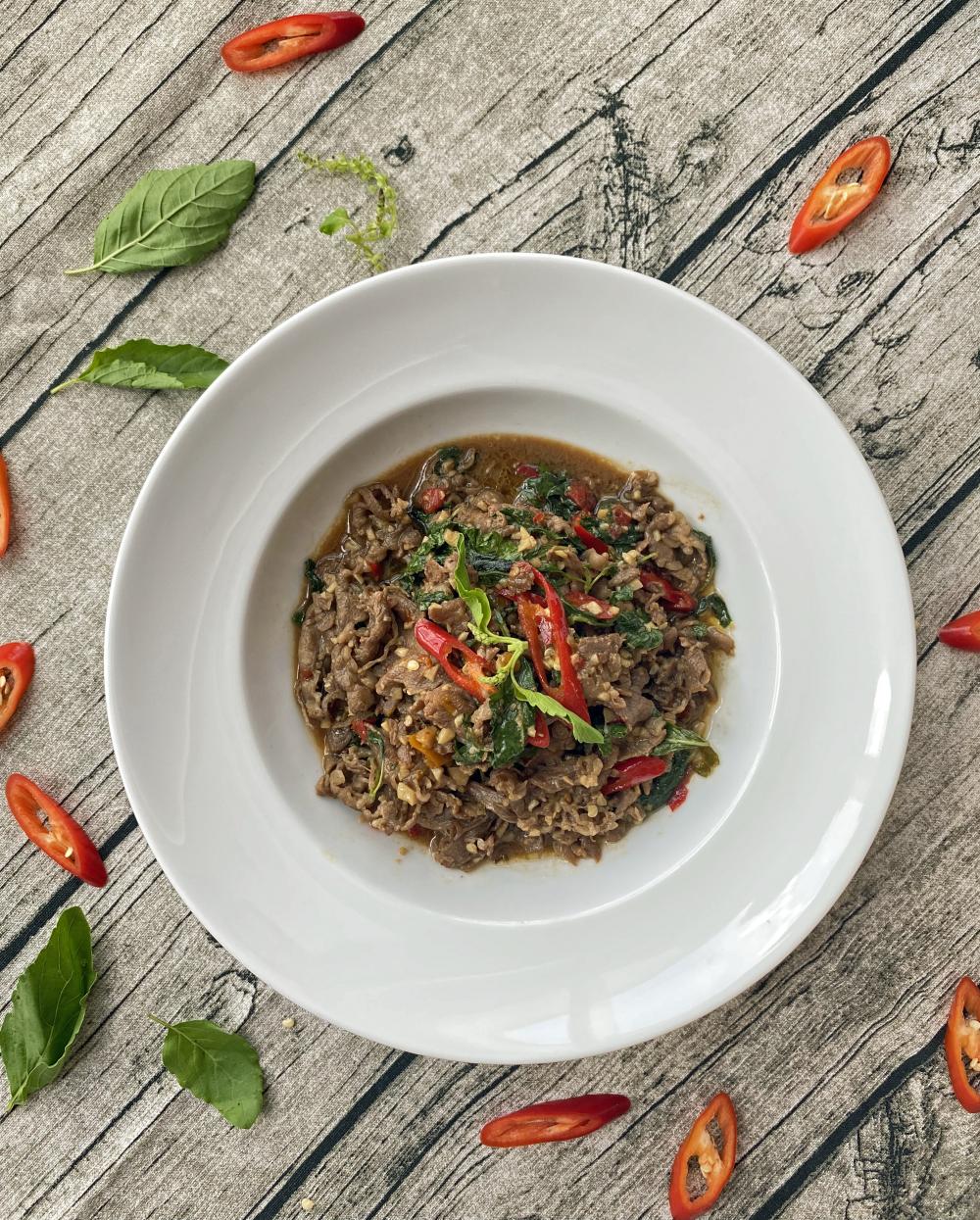 Over the past 30 years, executives and guests attending an event there were always impressed by the banquet it provides, so much so that the guests started to ask for the recipes.

The cuisine is not highbrow nor elaborate. It's a simple line-up of home-style fare prepared to recipes passed on in the household of Lamsam, the founding family of the Loxley empire. There are dishes such as pla duk krob pad phed, or wok-fried crispy catfish with chilli sauce; kha mu tun kiemchai, or stewed pork leg with preserved mustard green; and gai tun ma-nao dong, or lime-infused chicken soup.

Unfortunately due to the social distancing mandate during the pandemic, the function room chefs were facing a long halt and their cooking was very much missed.

The company's senior vice-president of food service, Charaspong Lamsam, came up with the idea. 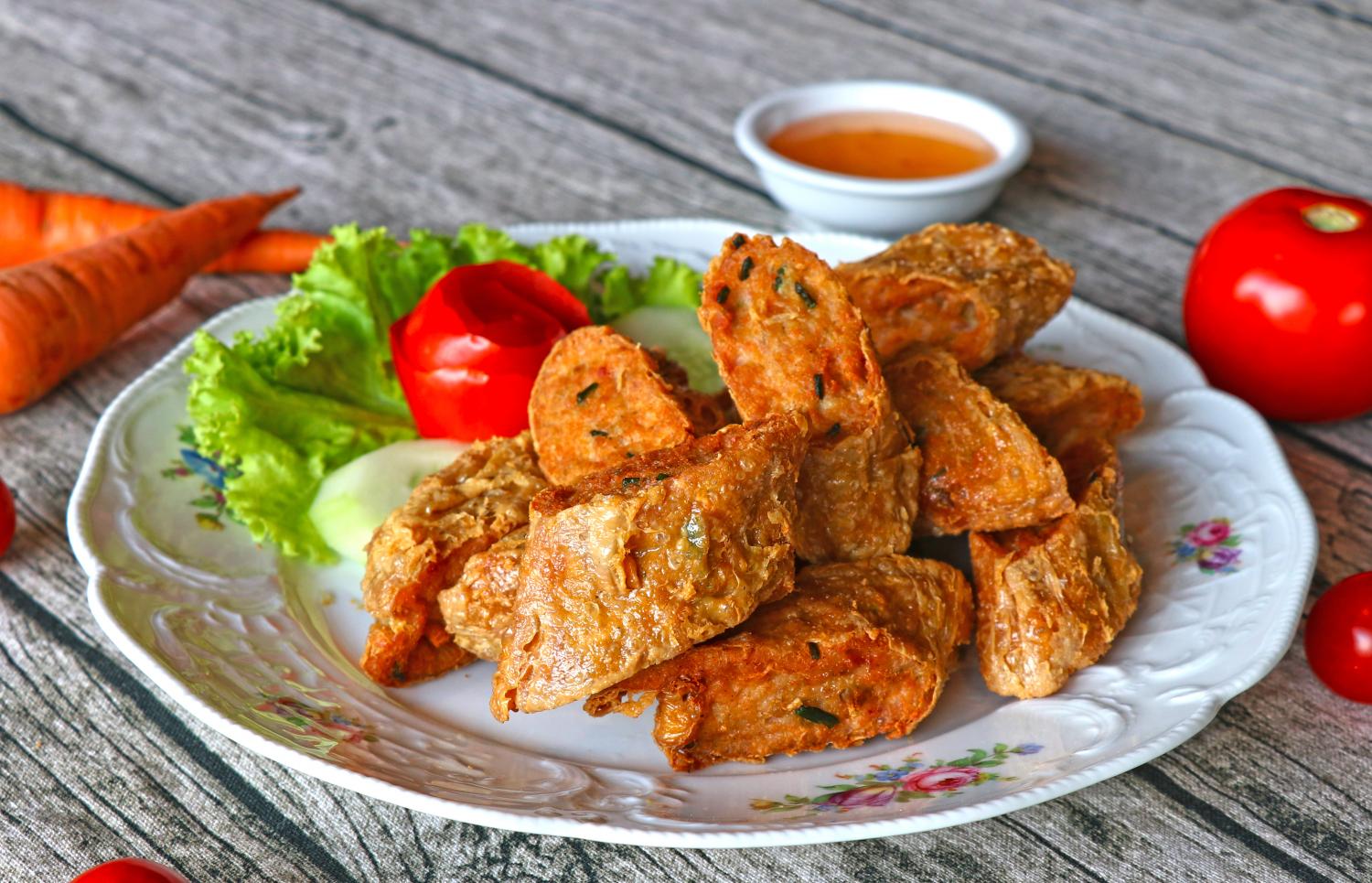 Actually, in case you don't know, Loxley's food department (which goes by the name L Food Solutions) owns, operates (and previously operated) a number of dining establishments including WaQ yakiniku Japanese restaurant and Ai Catering. Therefore food service is nothing new under its umbrella.

For Tamrub Guru, the offerings evolve around home-style Thai recipes and "cookshop" food (classic Western dishes with a Thai-Chinese twist popularised in Bangkok in the 60s).

Dishes, unlike most typical takeaway food, came in professionally-sealed bags as ready-to-serve rather than ready-to-eat. You will need to plate the food and probably reheat it.

Some dishes are offered with an uncooked or partially-cooked options so you can enjoy the food piping hot and crisp right from the stove.

The pla duk krob pad phed (200 baht), one of the two dishes that I liked most, required some prepping. 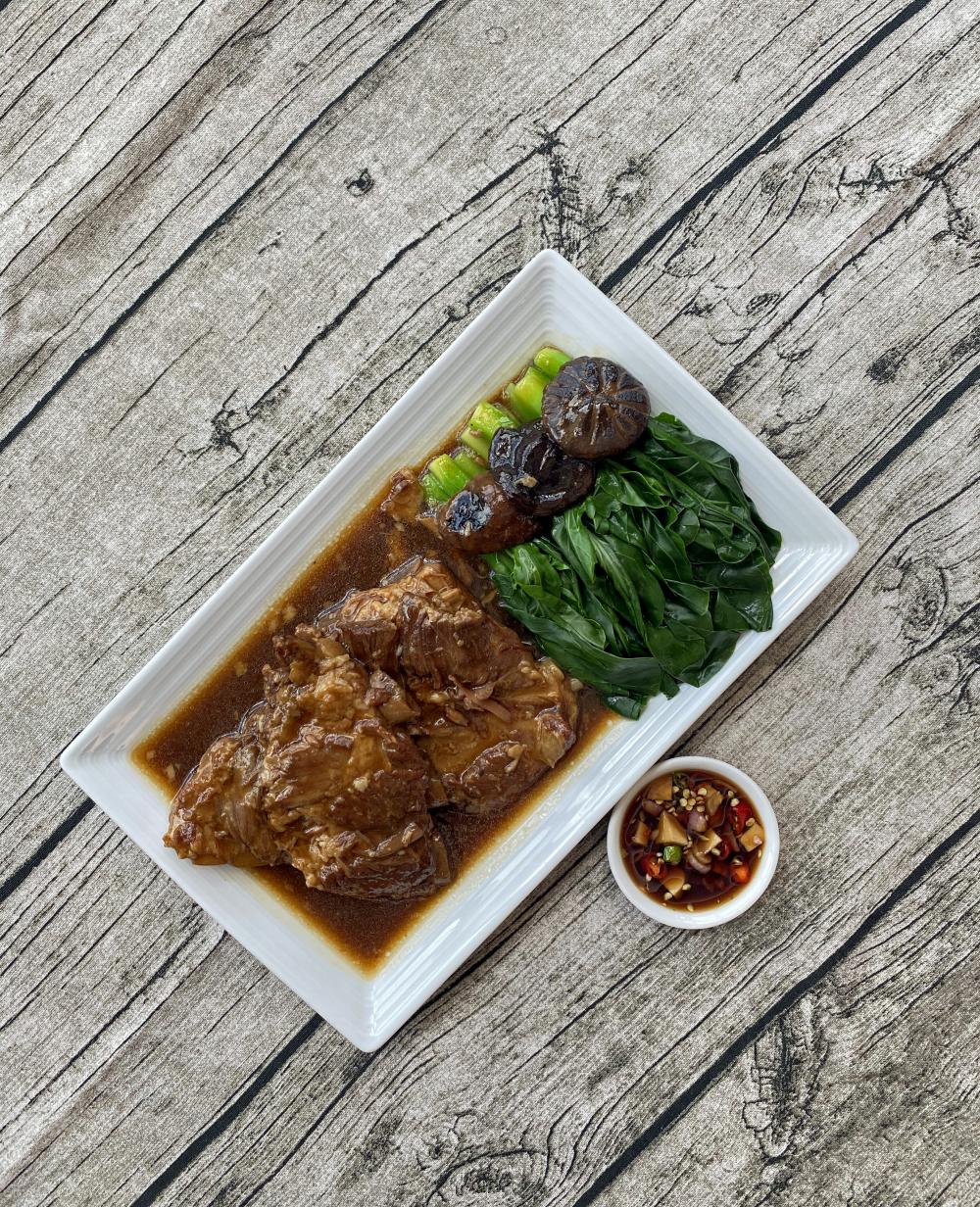 Of it, there were a good portion of crispy bite-sized morsels of deep-fried catfish; separate packets of fresh vegetables namely finger root (kra-chai), red chilli peppers and holy basil leaves; a large bag of curry-like sauce; and a tiny card with cooking instructions.

Customers will need to simmer the coconut cream-based sauce in a pan over high heat until the mixture starts to bubble and thicken before adding the rest of the content, with catfish being the last.

It was a 10-minute task, including the plating, and the delicious result was worth every nanosecond, especially since the fish retained its crispiness for hours even after being smothered in the sauce, which was savoury sweet and lightly spicy. The dish provided a familiar taste profile though not at all commonplace.

The other dish that astounded my taste buds was braised pork spareribs, or as described in Thai as si-khrong mu ob nam pheung (300 baht).

When served, the dish looked nothing but typical. However, the taste proved scrumptious, refined and heavenly addictive. 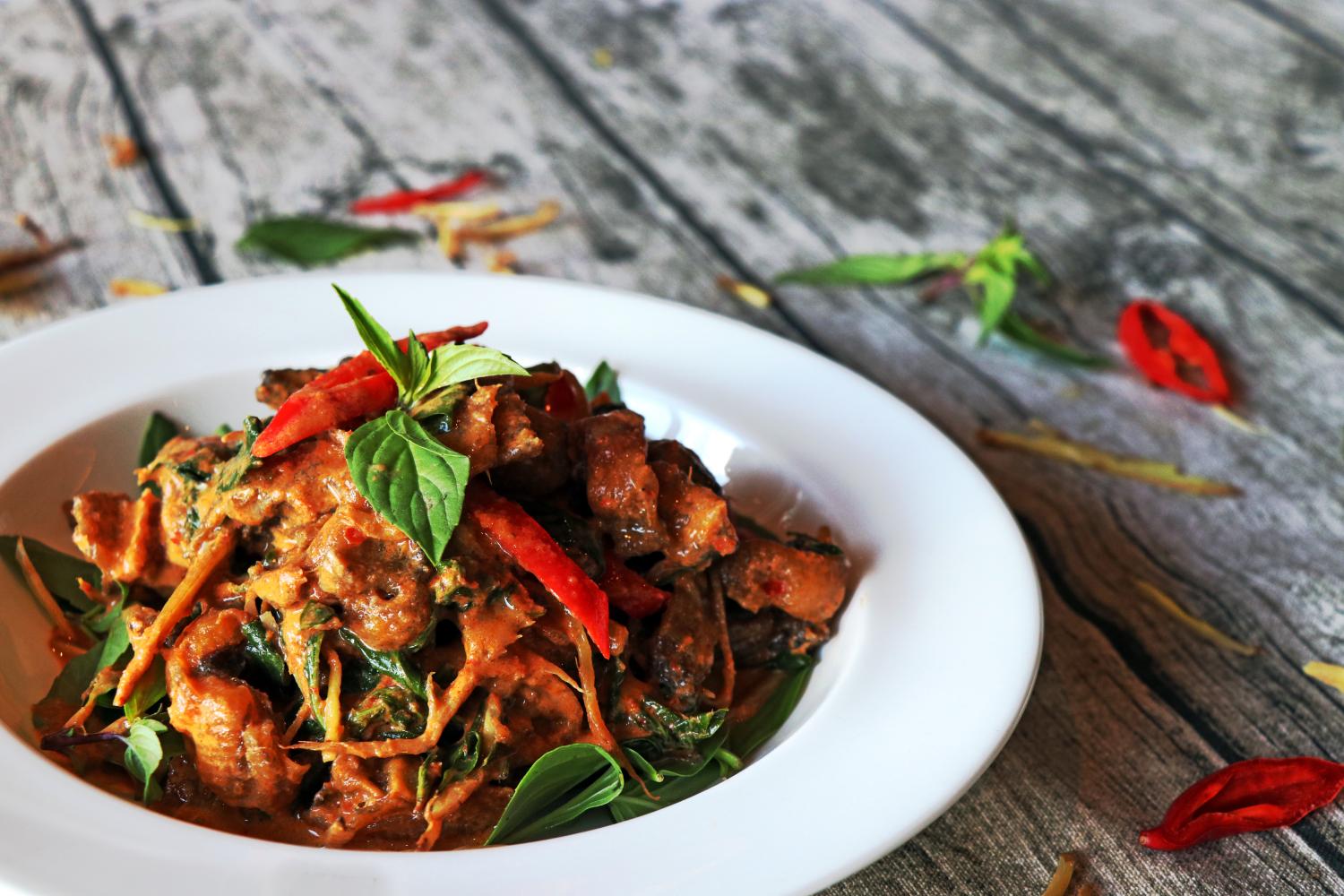 The pork was braised until tender and thoroughly absorbed the sweet savoury taste of the gravy but at the same time retained a nice meaty chew.

The dipping sauce, a marvellous brew of soy sauce, ginger, fresh chillies and lime juice on the side, lent a peppery tangy contrast that enhanced the overall taste of the dish.

There's a mu jor, or Teochew-style deep-fried pork cake (150 baht). A condensed mixture of minced pork meat and chopped water chestnut seasoned with soy sauce and white pepper was rolled in beancurd skin before being steamed, cut into pieces, and deep-fried. The treat, exhibiting a gummy flavourful centre encased in a crusty golden brown skin, was enjoyed with house-made sweet plum sauce.

Another signature dish that had enjoyed so much praise from the guests to the function room is braised pork leg with preserved mustard green (300 baht).

The pork leg was slow-cooked until the meat very tender and the thick fatty skin became translucent and melt-in-the-mouth supple. The slightly sour and peppery pickled vegetables helped give to the collagen-rich dish a crunchy and bracing complement. 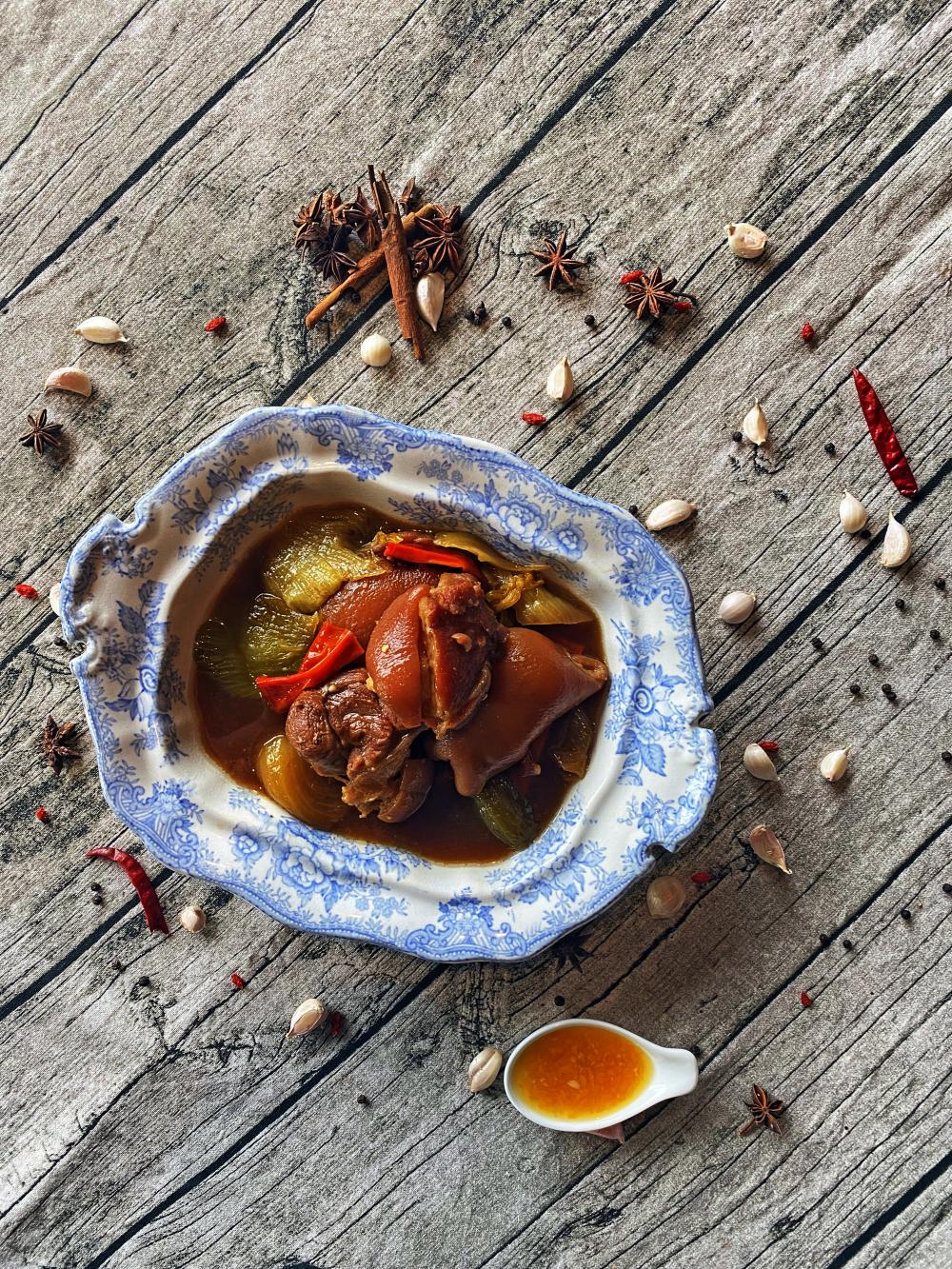 The thin-sliced, generously portioned, high-quality beef thrived to showcase its characteristic heavenly beefy taste that wasn't overpowered by the highly fragrant and pungent sauce. It's a dish that promises to make pad kaphrao fans and beef loons ask for extra servings of rice.

I found Tamrub Guru's chicken curry (250 baht) a bit mild for my palate. But I'm sure my 75-year-old mother, an avid connoisseur of cookshop fare, would give the yellow-hued Chinese-style curry with potatoes and onions a perfect 10 approval.

If you are a fan of lime-infused consommé, you'll find the rendition here -- double-boiled for hours with chicken leg and flavoured with fresh lime juice (80 baht for an individual portion) -- very soothingly satisfying.

Tamrub Guru's menu is available online at Line @tamrubguru. Home delivery as well as takeaway service is offered daily from 10.30am-7pm. Orders can be placed directly at the restaurant at 081-107-1224 or through Robinhood and Line Man. Self pickup is offered from Wa-Q The Garden restaurant on Rama III Road near the Klong Toey five-way intersection.