It's no secret that hidden gems lie deep in the alleyways of Yaowarat and this is perhaps, what draws the endless stream of people to this part of Bangkok, pandemic or not.

It is within the maze of left and right turns where Restaurant Potong lies, the newest baby of chef Pichaya "Pam" Utharntharm, who was born into a family of traditional Chinese herbal medicine producers. Potong is in same building that once housed the family business. Roughly translated as "simple", the five-storeyed shophouse is a mix of old and new. It is where Sino-Portuguese architecture of 1910 meets 2021. 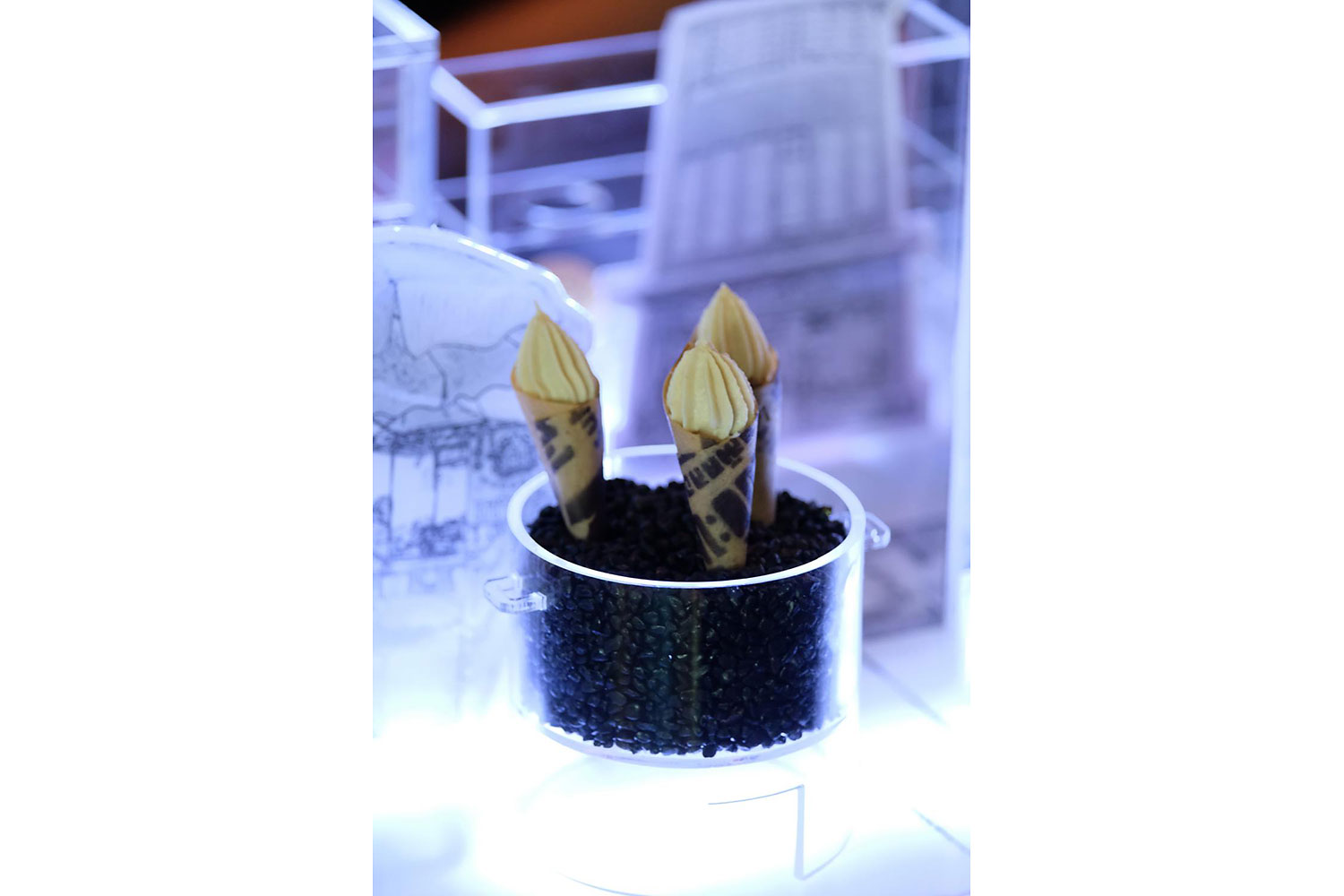 The first floor houses the Potong Sino Bar, explains restaurant manager Tor Boonpiti, though the bar may look more like a chemist shop of yesteryear with glass vats of fermentations. Not only use in the cooking process, the "kang pu cha" is also served as kombuchas. The second and third floor houses the restaurant, while the floor above has private dining and the topmost floor is a rooftop bar perfect for sundowners or nightcaps overlooking Chinatown. Both are soon to open.

Insider's tip: The bathroom used to be a bunker so don't miss admiring the thick wall. The modern elevator (this is as luxurious as a Chinese shophouse can get) used to be a dumbwaiter for the chemist shop.

The dinner menu offers 20 courses (B4,500++) and the focus is on five senses and five elements. "The elements are salt, acid, spice, Maillard reaction and texture. A lot of the dishes require diners to touch their food, there is either contrasting or mono textures. You have to touch, smell, listen and see, which when combined take diners on a spiritual memory," says chef Pam.

My journey begins with the quintessential Chinese good luck offering of oranges, in a tree no less. "It's our welcome gift," says executive sous chef Ricardo Nunes. Do make sure you pluck it swiftly and put the entire thing in your mouth. No secrets being revealed here! The next duo is an umami broth, which is representative of Yaowarat. White tea is infused with fresh Chinese roots and jing ju chai or white mugwort. The broth is accompanied by a lamb tart, meant to represent BBQ pork. The next dish is one of chef Pam's favourite ingredients -- corn. A delightful-looking dish reminiscent of crème caramel, the corn is made with corn milk and brown butter, with shavings of truffle. The cold corn silk tea has ingredients like King Solomon's-seal. The leaf is made from corn and white pepper, and adds texture to the dish. 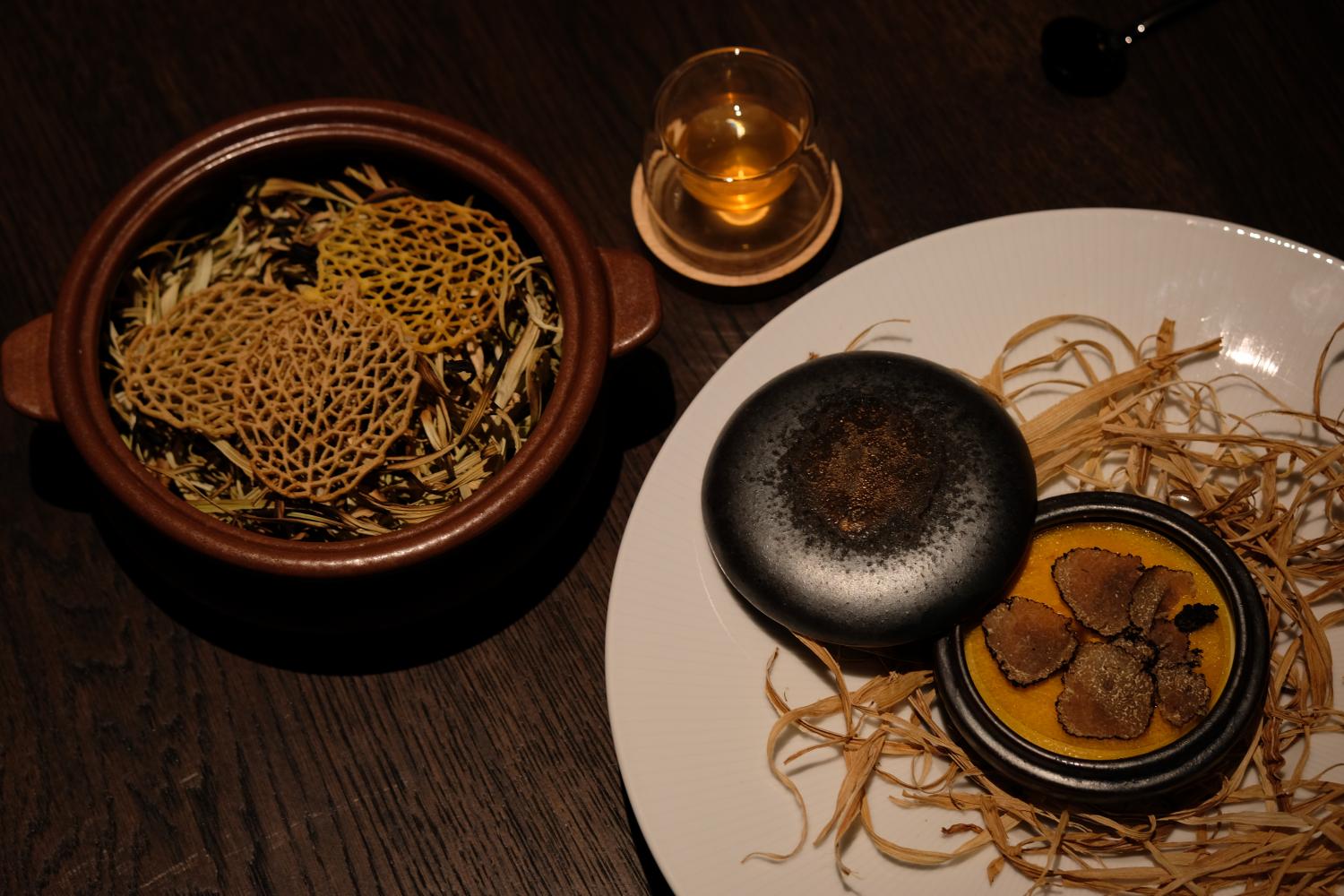 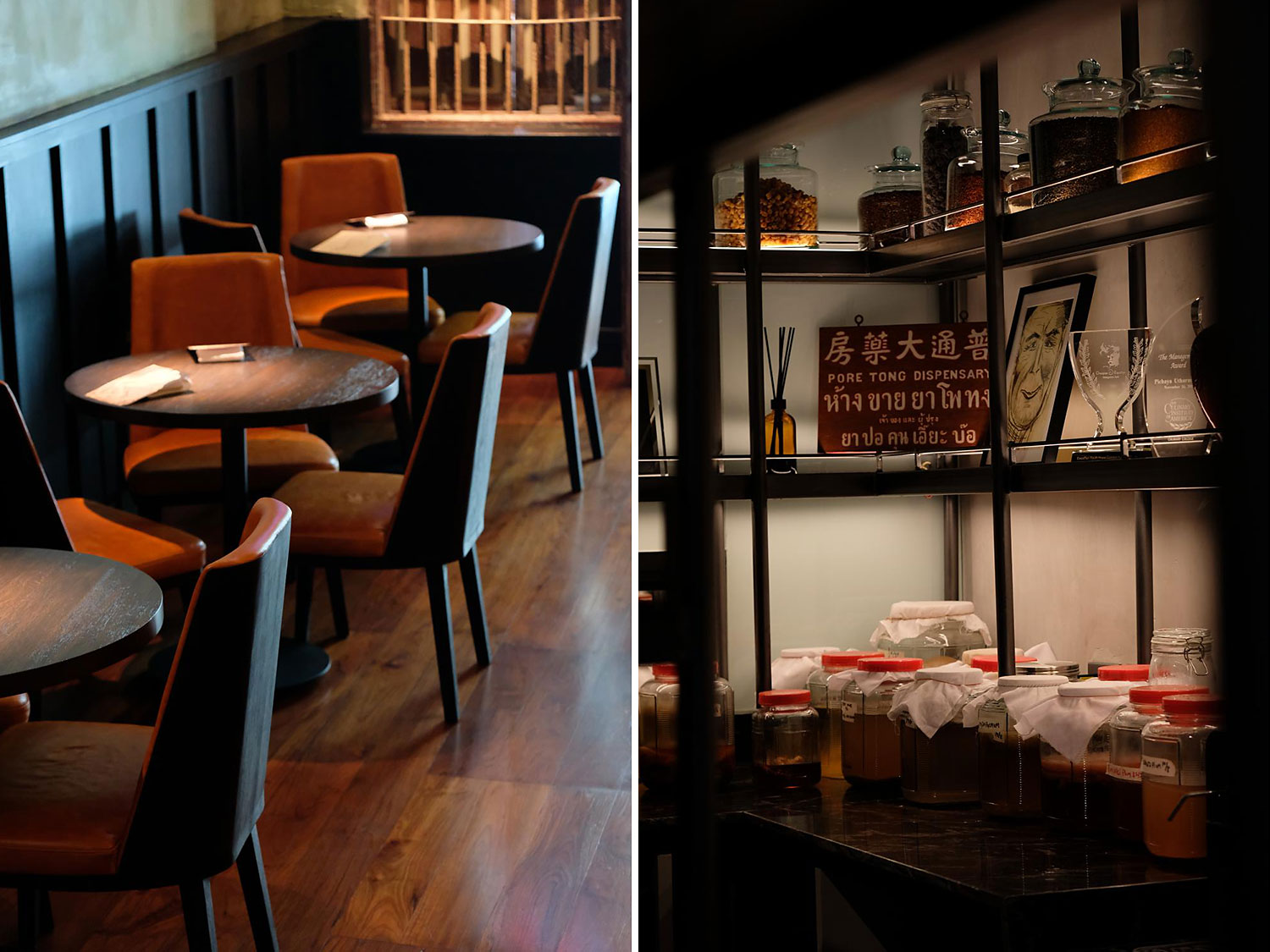 To add a touch of green, baby gem is filled with a salted egg emulsion, crab caramel and bilimbi koshu, being aged in-house since May. Finger limes from Chiang Mai are sprinkled over the top with fermented powder from the outer gem leaves. It is misted tableside with celery vinegar. Stewed duck beak and tongue is a Chinese delicacy and at Potong it is refined. Duck tongue comes on a stick and with three sauces: Green curry pesto, mussel cream and a kafir lime gel. A fun dish!

What follows is a dish that I put into my mouth rather painstakingly, and not because of what it is, but because of the hours that go into making it. It is Potong's interpretation of dim sum. A bamboo lattice is wrapped around a filling of frog and scallop meat creating a parcel. The broth is made from Chinese roots. Each lattice is constructed individually and it is a sight of beauty. But being the glutton that I am, admiration didn't last long.

If you thought frog was "exotic" enough, hold out for the next course of sea cucumber served on a handmade clay sculpture depicting sea urchin. Everyone at Potong helped to create this sculpture; not one is the same. "We are not sure whether diners are going to like or understand this dish," says chef Pam. Compressed with radish and roselle to give it colour, the sea cucumber is served with sago cooked in ginger juice and adorned with elderflowers. The accompanying squid egg is a dish that represents yin and yang, and is from chef Pam's memory of the squid eggs being grilled on sticks around Yaowarat.

What comes next is a modern version of a Chinese classic -- black chicken. Korean black rice and black chicken breast with trimmings are cooked in a pork bladder with charcoal powder. The bladder is then simmered in a chicken bone broth of aged mandarin peel, cinnamon, star anise and 20 other ingredients. The chicken is cured in kombu, blanched, steamed and glazed in jus. The presentation is not for the faint-hearted, literally. A leg is artistically placed along with the rice mix, which is revealed tableside. There is also half a chicken heart on top of chicken fat ash and a black vinegar foam. "The idea for this dish comes from Sino-Portuguese cultures. In Portugal, we have a dish that becomes almost black when blood is added to it. So we refined this dish," says chef Nunes. 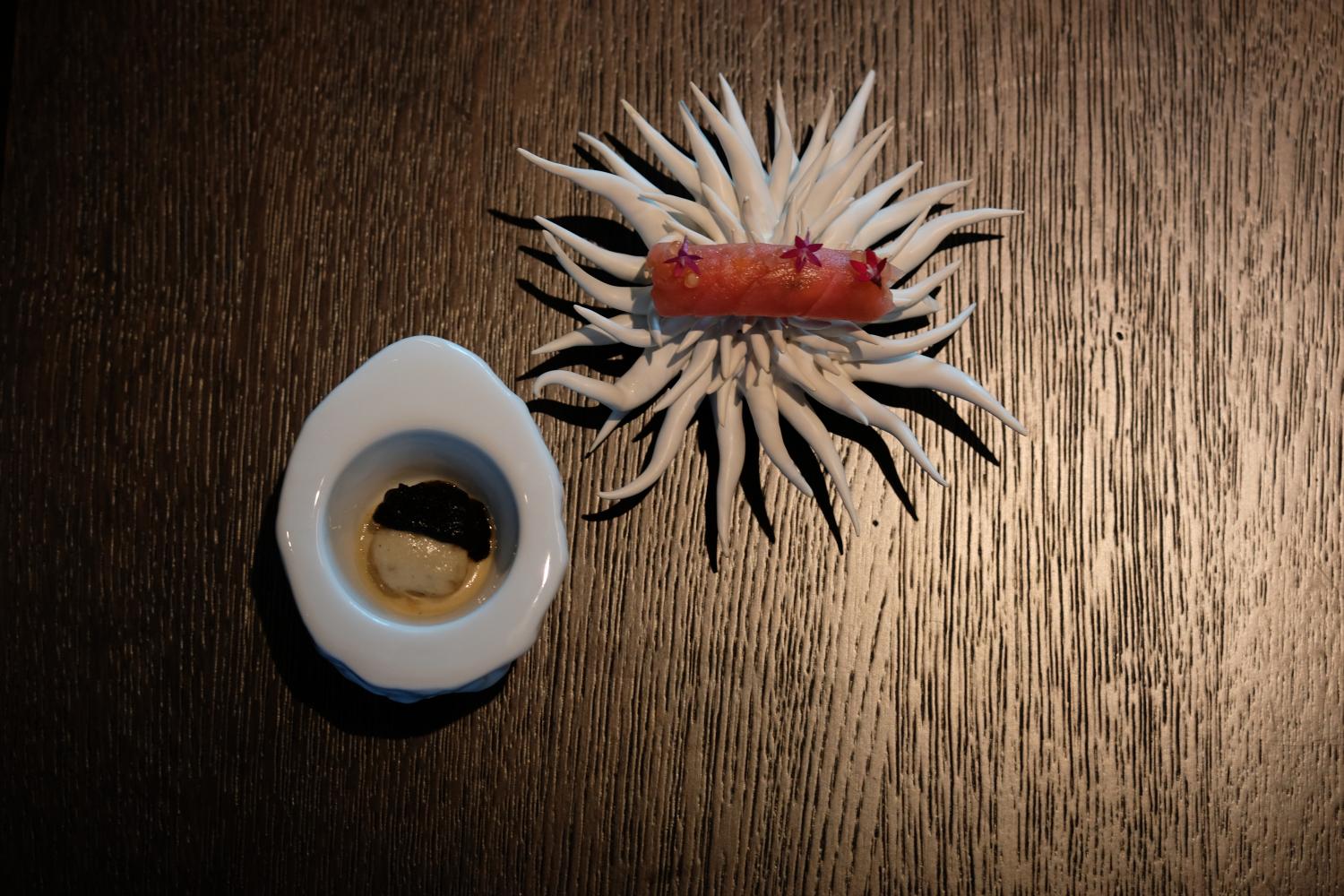 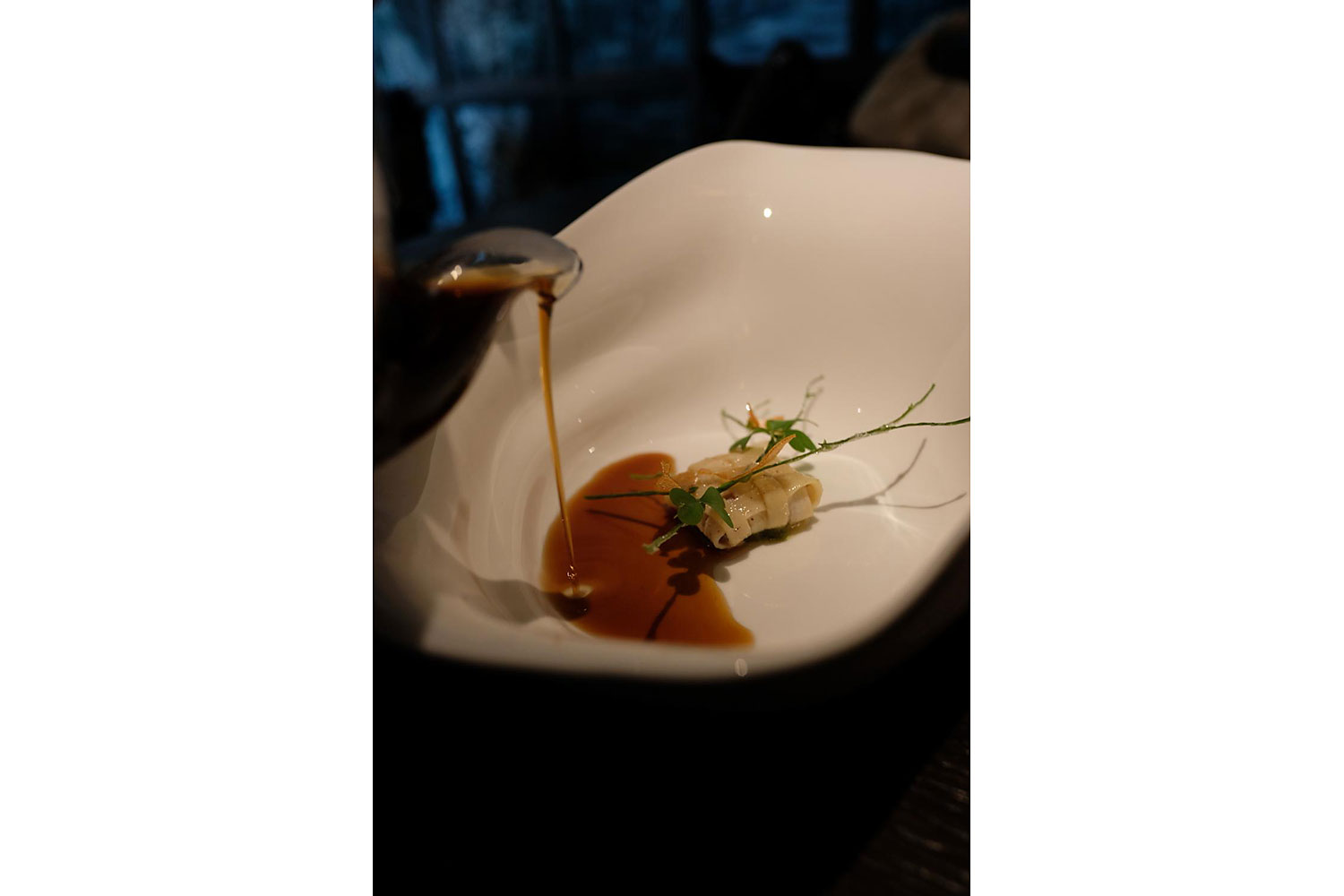 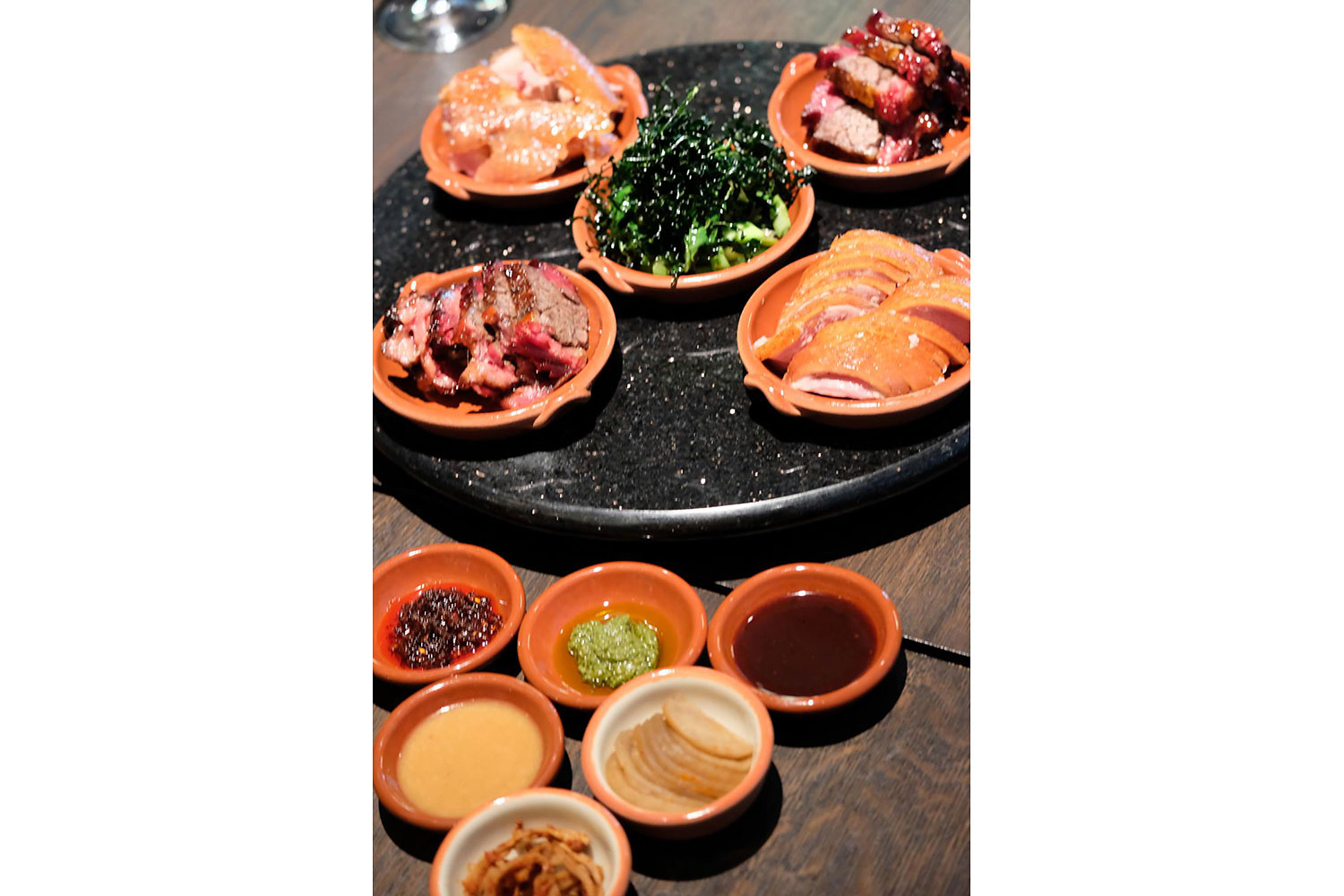 Duck and Angus beef with condiments. 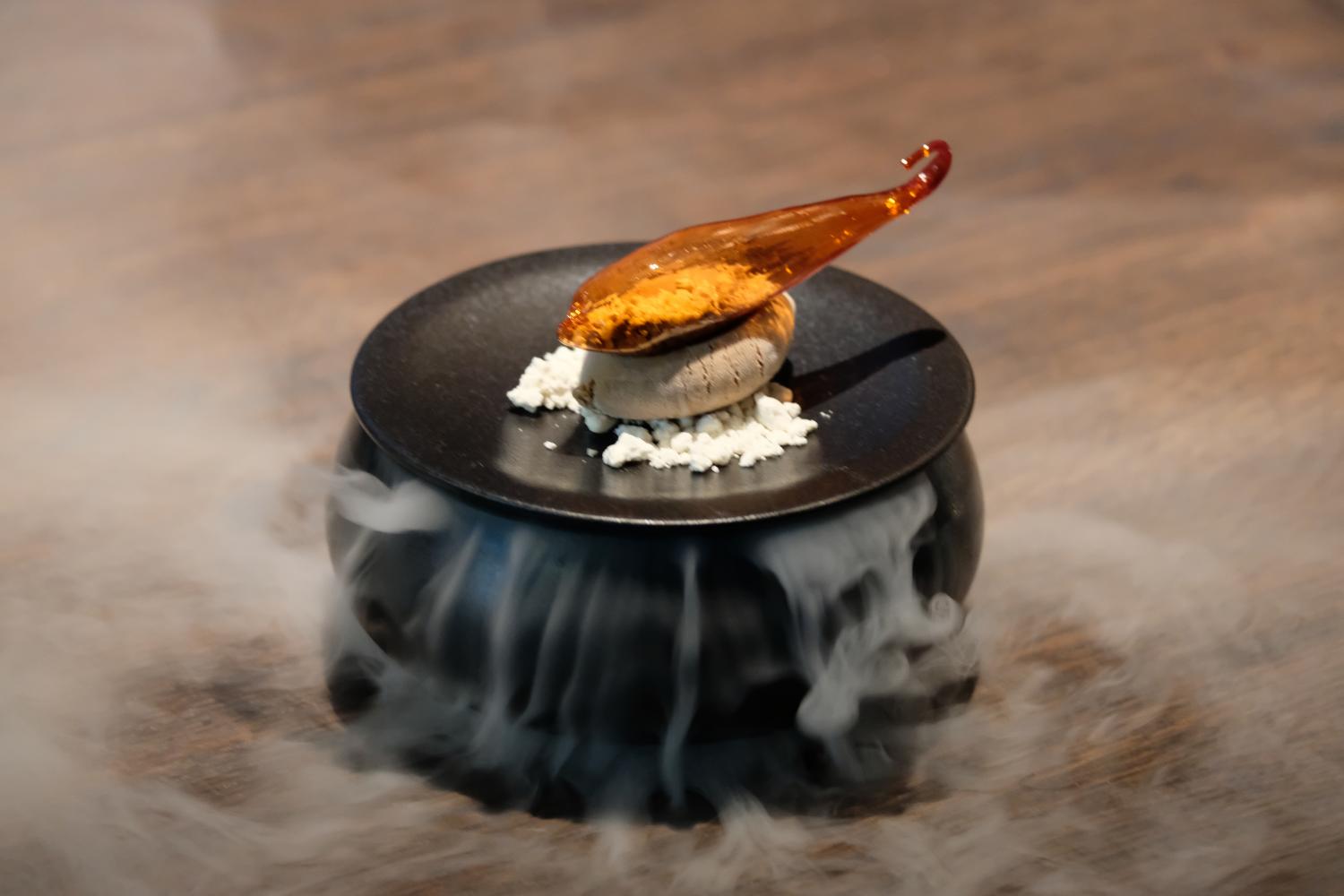 The seasonal palate cleanser is pink guava and this is followed by squid noodles and moo krob, with a side of wok-fried lettuce and a sauce to die for! The sauce is Potong's take on an XO made from conpoy, ham and dried squid from the trimmings of the squid noodles. The noodles are cut thin and dipped in brown butter, served raw.

The protein on the next dish depends on what the fishmonger supplies. I had tiger prawn, which is brined in shio koji for an hour and grilled in kombu. Served with boy choy for crunch and sea grapes. The spicy culantro sauce is incredible.

The highlight is the 13-day hay-aged, five-spiced duck, which is bathed in soy sauce. Served Chinese style on a Lazy Susan, the duck breast and legs are served along with Angus beef ribs, brined for two days and slow-cooked for another day. "It is a really long process. We brush it with Chinese barbecue sauce, so that diners get the sweet and salty flavours," says barbeque fanatic chef Pam. "The concept of a Lady Susan reminds me of Chinese-style family meals and this is an important component to finish the meal," she adds. The duck and beef are served with six sauces: chilli, ginger-scallion, BBQ sauce, mustard made of cashew nuts and two kinds of daikon: sundried and fermented.

Before heading to desserts, a refresher in the form of frozen cotton candy appears. Dessert starts off with a bang. House-made soy sauce ice cream and various Chinese spice powders are put into a sugar-blown dolphin-like sculpture. But the artwork of pastry chef Kanin "Kuang" Buntanbut doesn't end there. The dessert trolley is a mix of the old and new, and is a sight to behold. Of course, no Chinese meal really comes to an end without a fortune cookie.

The goal at Potong is to work closely with farmers so a few dishes may change depending on seasonality and availability of ingredients. All of the saltiness and sweetness comes from natural, traditional Chinese herbs, roots and other ingredients. To sum it up in a single sentence: A new generation of progressive Thai-Chinese cuisine.