Marriage up in smoke

A Yasothon man is demanding the return of a 90,000 baht dowry after he found his wife in bed with another man. 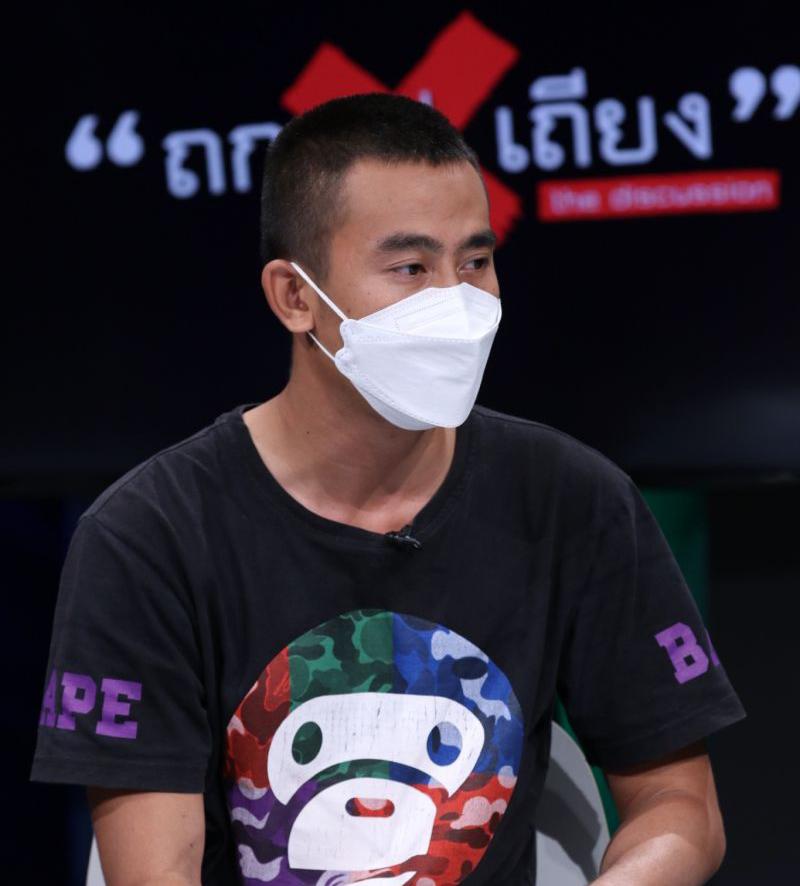 Thi wants his dowry back.

Thi, as he is known in the media, took a 100km motorcycle journey from his home in Thai Charoen on Sept 12 to see his young wife, Kee, in Ubon Ratchathani.

He left the military on Sept 1 after one year's service as a conscript. In August, after not seeing her for some time, he noticed she had started to grow distant. She rarely answered his calls and messages, and asked if they could take a break.

She proposed they discuss their future on Sept 11 but when he called that day, she didn't answer. So the next day he set off on his journey to her apartment, having already steeled himself for the prospect she had found someone else.

When he arrived outside their place in Ubon, where Kee studies at university, Thi found a man's shoes outside the door.

Letting himself in, Thi said he saw someone lying in his bed, which at first he took to be his wife. He pulled off the covers to find a young man, and shocked, started filming the encounter on his phone. He jabs the youngster's chest, demanding to know how many times he had slept with his wife. "Are you a man? Talk to me like a man!" he demands. 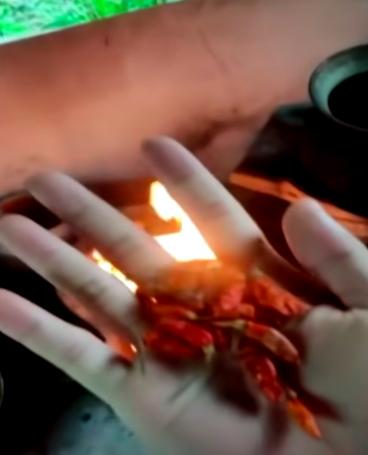 Handfuls of chilli and salt were thrown into the fire after the burning items.

The young man, who seems more interested in disguising his identity from the probing camera, awkwardly pulls on a face mask as Thi has his T-shirt in his grip. He mumbles that he had been to see Kee "once or twice".

Kee had taken shelter in the bathroom, the youngster said. In the clip, Thi marches to the door and kicks it in. He finds Kee standing in her pyjamas looking helpless and abuses her for being unfaithful.

"It was the worst day of my life, but I was able to keep my cool when I discovered the pair," he said later.

Thi took the long bike ride back home alone in pouring rain. Later, he posted the clip on TikTok of him entering the apartment and chastising the pair. Netizens offered him encouragement and praised his self-restraint.

It was shared widely, prompting a request from Kee's family to take down the clip or suffer legal consequences. Thi did as he was told, but later heard that Kee had been to see the police anyway.

Back at home, Thi could not bear to see reminders of their time together, such as photographs and matching clothes they had bought. In another clip, he tips the lot into a small coal pot and burns them.

He also throws in handfuls of chilli and salt after the burning items in line with the Thai custom, pao prik pao glua, where the person trying to banish bad things from his life usually throws in a few curses against the offending party as well.

In this case, Thi said he didn't curse his wife, but he did post the clip to TikTok as a follow-up. "I want to ask, in the past, did you ever love me?" he asked.

He told reporters who visited him in Yasothon that he wanted Kee's family to return the 90,000 baht he had given them as a dowry. The pair had been together two years and met in Ubon Ratchathani where both were raised.

While they had not registered the marriage, they did take part in a ceremony involving both families and including the tradition of tying strings on each other's wrists. 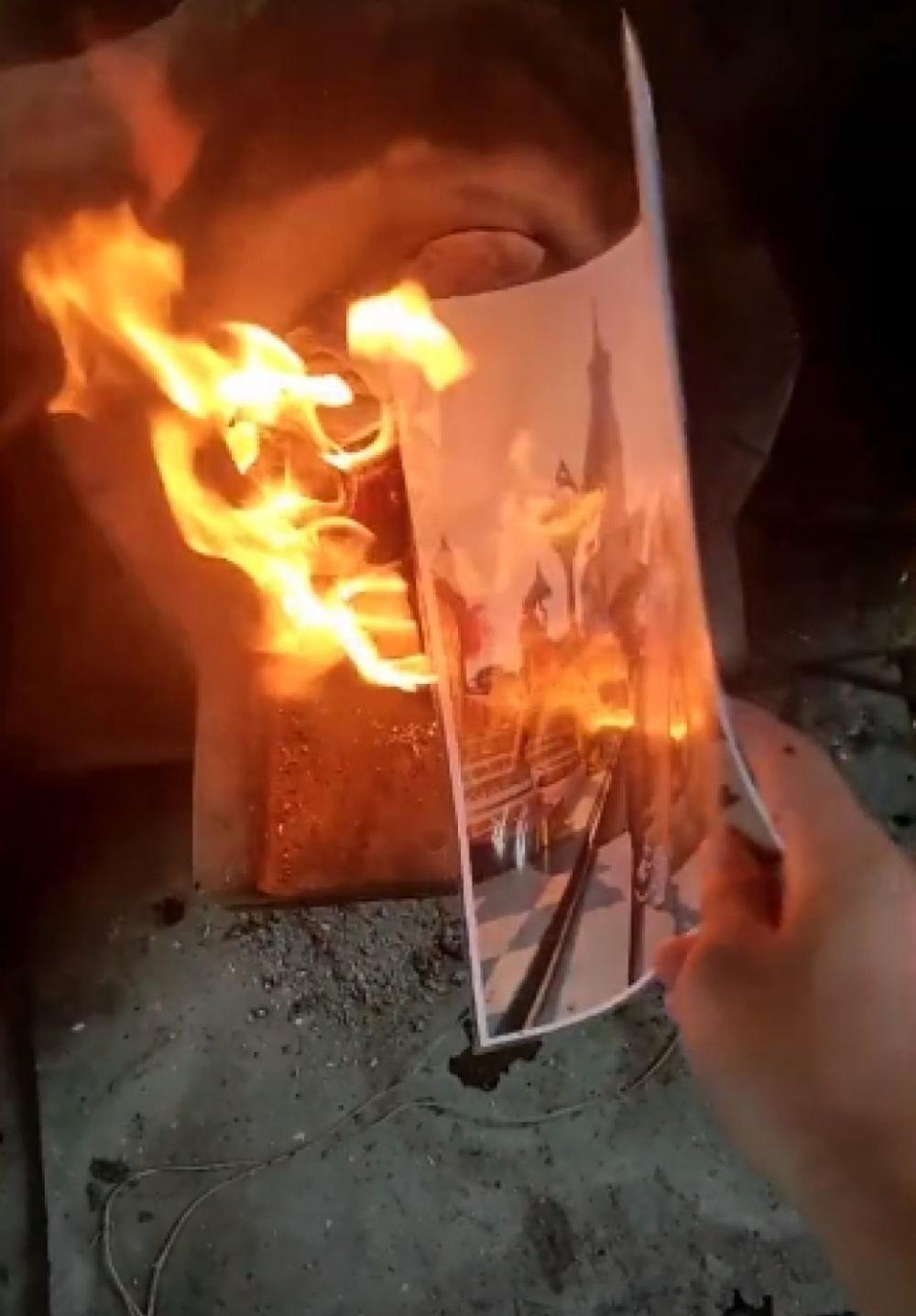 Kee's father, however, who also spoke to the media, disputes it was a dowry, saying the payment was more in line with an apology by Thi after he absconded with his daughter to Bangkok after they first met. He had demanded Thi return and marry Kee properly or they would go to the police.

Later in the week, Thi appeared with his family on the 7HD TV show, Tok Mai Tiang, to discuss the drama. His mother said if Kee did not withdraw her police complaint, she would counter-sue.

Lawyer Monchai "Kaew" Jongkrairattnakul, who also appeared, said even if Thi gave the family the 90,000 baht by way of apology, it was still part of the wrist-tying ceremony, so should be regarded as cementing the marriage. He could sue to recover it.

Thi said he wanted the whole matter to end peacefully. The show's producers called police in Ubon's Warin Chamrap, close to where Kee lives, who said no one of her description had laid a complaint.

Wrapping up the show, he sang the pop tune Moving On by Pramote Wilepana, to tell Kee there was no chance of making up.

Grievance with a gun

A security guard with a fiery temper took the life of a younger man, once a close friend, in a fit of pique after being sacked from his job. 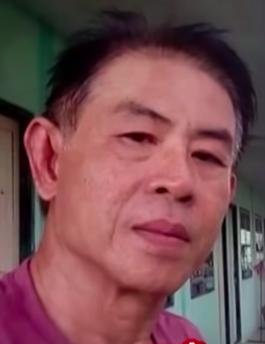 Jeerawat "Lek" Opatsathaporn, 58, former head guard at a housing village in Muang Ake, Pathum Thani, was nabbed on Sept 17, a day after slaying his former mate at work, a young man more than 30 years his junior with whom he once was close.

Ronnakorn "First" Pongsud, 21, was asleep and did not have a chance to defend himself. In full view of a CCTV camera which saw him turn up and pull a handgun from under his motorcycle seat, Mr Jeerawat calmly entered the security booth at the housing village, shot First twice as he sat in his chair, and left again.

Earlier, he told the guard sharing the shift with First not to meddle. Krungsi Apparathung, also head guard, said Mr Jeerawat arrived on his bike about 5am, strode up to their booth and said: "You, get out, or do you want problems?"

Mr Krungsi said he was aware that Mr Jeerawat and First had fallen out a few months ago, with the result that Mr Jeerawat was sacked, and Mr Krungsi replaced him in the top job. However, he thought he had come back to clear the matter. He did not suspect the older man would seek revenge in such a dramatic fashion.

"I thought they would just hit each other as I didn't see the gun," Mr Krungsi said. He walked to the rear of the booth about 8m away when he heard a sound like a firecracker going off.

Mr Jeerawat came back out to see him and said brusquely: "You are not involved, so don't meddle." With that, he returned to the booth and shot First again. Moments later, he left the scene.

Mr Krungsi said he returned to the blood-spattered booth. Mr Jeerawat had shot First in the head and the chest. In shock, Mr Krungsi contacted a guard at another village nearby before calling the police.

"I feel bad that I wasn't able to protect my subordinate, and think Jeerawat's behaviour was extreme. He showed no respect, shooting First at such close range," he told reporters.

The killer took refuge in a family-owned banana plantation for the rest of the day before giving himself up. The tragic case stunned those who knew the pair, who recall the days when they were still close. First used to pick up Mr Jeerawat from work and take him home again.

They took meals together, and also went to get their vaccine jabs at a local store. The pair also took votive vows before local spiritual deities to help First get off military conscription duty.

Speaking from First's funeral at Wat Rangsit, his mother, Lampang Daengna, said the killer evidently nursed a grievance following his argument with First in July. While Mr Jeerawat was sacked, First was able to keep his job, which the killer thought was unfair.

He had threatened First after their row. "Watch out for yourself in the news," he grumbled. However, no one saw the attack coming, as Mr Jeerawat did not make contact again.

Despite being concerned about his safety -- he even asked his mother what she'd do if Mr Jeerawat killed him -- First decided to stick with the job, which he enjoyed.

He was popular with residents of the village, who complimented him on his hard work and cheerful demeanour.

For the older man, however, they had little but scorn. Mr Jeerawat, his boss recalled, would get into arguments with residents, who complained to the manager.

While accounts differ as to what sparked their row, Mr Jeerawat admits he took a knife to the young man, stabbing him in the finger. When First told his mother, she insisted he lay a police complaint. "The police did not pursue it, which allowed the killer to come back and finish the job," she said.

The killer's elder sister, Imm, 70, said Mr Jeerawat told her that First had hit him first. She had warned her brother not to nurse a grievance, to no avail. Police have charged him with intentional killing and firearms charges.

An argument over cats led to the brutal slaying of a one-legged former army veteran on a grassy field in Trang.

Hmun "Nenmun" Thongnui, 60, from Nai Tao, Huai Yot, was found in a ditch by the side of Sai Nai Ron-Nai Tao Road on Sept 14. Nenmun had turned up to sow grass for the cows which his family raises nearby when his killer strode up from behind and attacked him with a machete.

Nenmun, who lost his leg in a bomb blast in the southern border provinces where he served as a ranger, and wore a prosthetic limb, was unable to defend himself. Suspicion quickly fell on his neighbour, Hnguan Eiadkert, 53, who had threatened to kill Nenmun in an argument over the cats which Nenmun took in from a local temple. When on heat, the cats would stray into Hnguan's place, biting his own pets.

Nenmun had taken in seven cats and two dogs from Wat Tham Phraput Kosi, or Wat Nai Tao. Mr Hnguan himself raised many animals, which also strayed into Nenmun's place. A hard-working, quiet type, Nenmun returned from the South about 15 years ago and spent his days planting grass for the cows which his younger sister raises, keeping largely to himself. 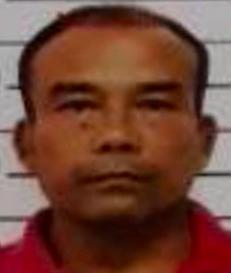 His son, Chotirot, or Nui,15, who lived with his Dad, said he was shocked to see his father's body in such a state, with deep slashes to the face. Other than Mr Hnguan, his Dad had no enemies.

"They argued over the cats about five or six months ago. He threatened to kill the animals and my Dad, but my father took no notice," he said. Police nabbed Mr Hnguan, who admitted killing his neighbour. He was charged with intentional killing.