Waiting for change at Din Daeng

With cops vying to get tough on protesters, Life spoke to some youths who revealed that they just want a better future

It was after dusk when the first bang went off somewhere in a war-like zone. "They are just warming up," said a young dropout waiting for his friends amid an explosion near the bridge at Din Daeng intersection in Bangkok.

The tussle between young protesters and crowd control officers has continued for over two months. The neighbourhood has turned into a battlefield where tear gas and rubber bullets are exchanged with fireworks and slingshots.

The clashes are sparking debates on their legitimacy. On the one hand, protesters have come under fire for vandalism, including torching traffic police kiosks and royal portraits. On the other hand, officers have been denounced for lack of professionalism in dispersal operations such as in the hit-and-run accident where an officer's car hit a young protester and crossfire shooting.

In light of this, Life spoke to three young protesters who joined a protest last week to oust the government because its coronavirus mismanagement is causing economic hardship.

Calling for a good leader

Like sitting around a campfire, a small group of protesters take turns venting their anger, citing the government's failure. Just a stone's throw, a middle-aged woman sings the folk song Ror Pee Tee Din Daeng (Wait For You At Din Daeng), which provides a romantic setting to the protests. Another teenager stares into space and smokes an e-cigarette.

"I want to be a mechanic. I want to buy and add accessories to my bike. It makes me feel happy," said Ben, 20, who graduated from high school, but dropped out of vocational college due to financial problems in 2019. If possible, he wants to continue studying.

Ben lives with his blue-collar parents in Don Muang. After leaving school, he began to sell food products online to support himself and his girlfriend. However, with the coronavirus, things have gone from bad to worse. It is very difficult to make ends meet.

"I joined the demonstrations last year to express dissatisfaction with the government's mishandling of the pandemic, including inadequate financial relief and unemployment. Above all, I don't see any future," he said.

Ben said he disagrees with violent clashes but when officers cross the line, protesters strike back. Nevertheless, he admitted that some hardliners are deliberately being provocative, which can lead to a tough crackdown. He has been hit in the rib by three rubber bullets. 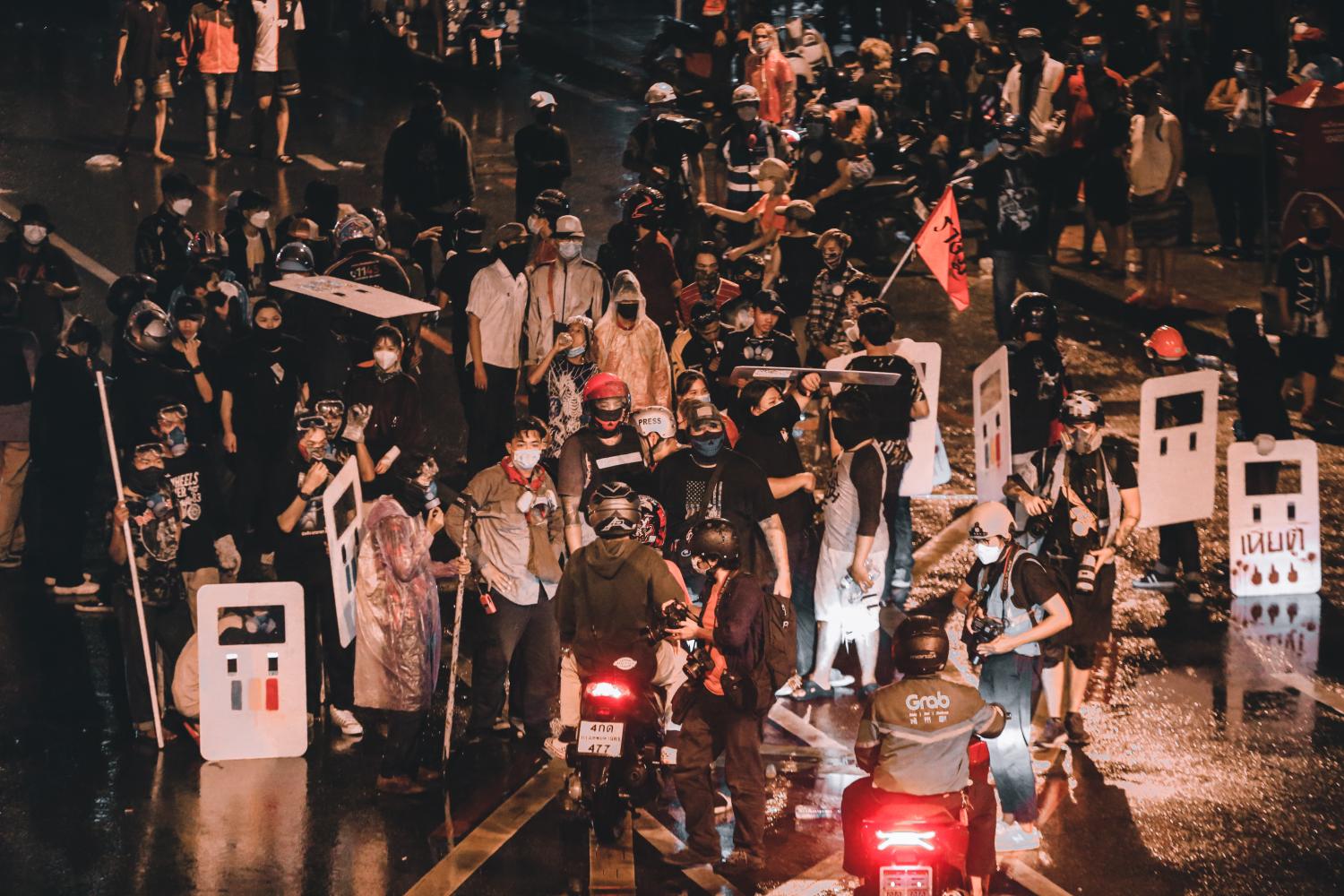 "I was arrested on Aug 18. An officer told me that he didn't want to come here but nai sang ma (my boss gave an order)," he said.

When asked how a good country should be, he said it should uphold the rule of law and respect diverse political views.

"I want the government to rewrite the charter. I don't want to interfere with monarchy reform," he said.

Following crackdowns, the number of demonstrators, most of whom are young students from vocational training colleges, has dwindled in size. However, some of the protesters are adults and seniors, including outspoken elderly protester Worawan Sae-aung or Pa Pao.

Another teenager sits casually on his bike. Petch, 20, dropped out of junior high school and became a security guard before the coronavirus led to a massive layoff. He lives with his parents in Bang Sue. When construction camps closed, his father lost his job and income. Meanwhile, his mother sells less because people are spending less.

"I come here to call for the ouster of Tu [Prayut's nickname]. I disagree with violence, but we didn't start it. However, I am worried that people will brand us hotheads," he said.

The youngest boy, 17, who asked not to be named, was a vocational student and part-time rider. However, the coronavirus forced him to take online classes, which does not provide a hands-on experience. He lives with his parents in Bang Kae, but they were laid off and are struggling to earn an income from menial jobs.

"I don't see any future here. I don't want anything lofty but at least a mediocre life. We want the government to improve. We do not want to confront officers but there has not been any negotiation," he said.

Our conversation came to an end at 7.30pm because the night-time curfew remains in place. The Thai Lawyers for Human Rights reported that crowd control officers rounded up 16 protesters, nine youths and seven adults, between 9.30-10.30pm. Since July, police have arrested over 630 protesters for breaking the law.

The Metropolitan Police Bureau has considered the protesters to be rioters and not demonstrators because they instigate unrest, damage public property, and violate laws, including the emergency decree and the communicable disease act. 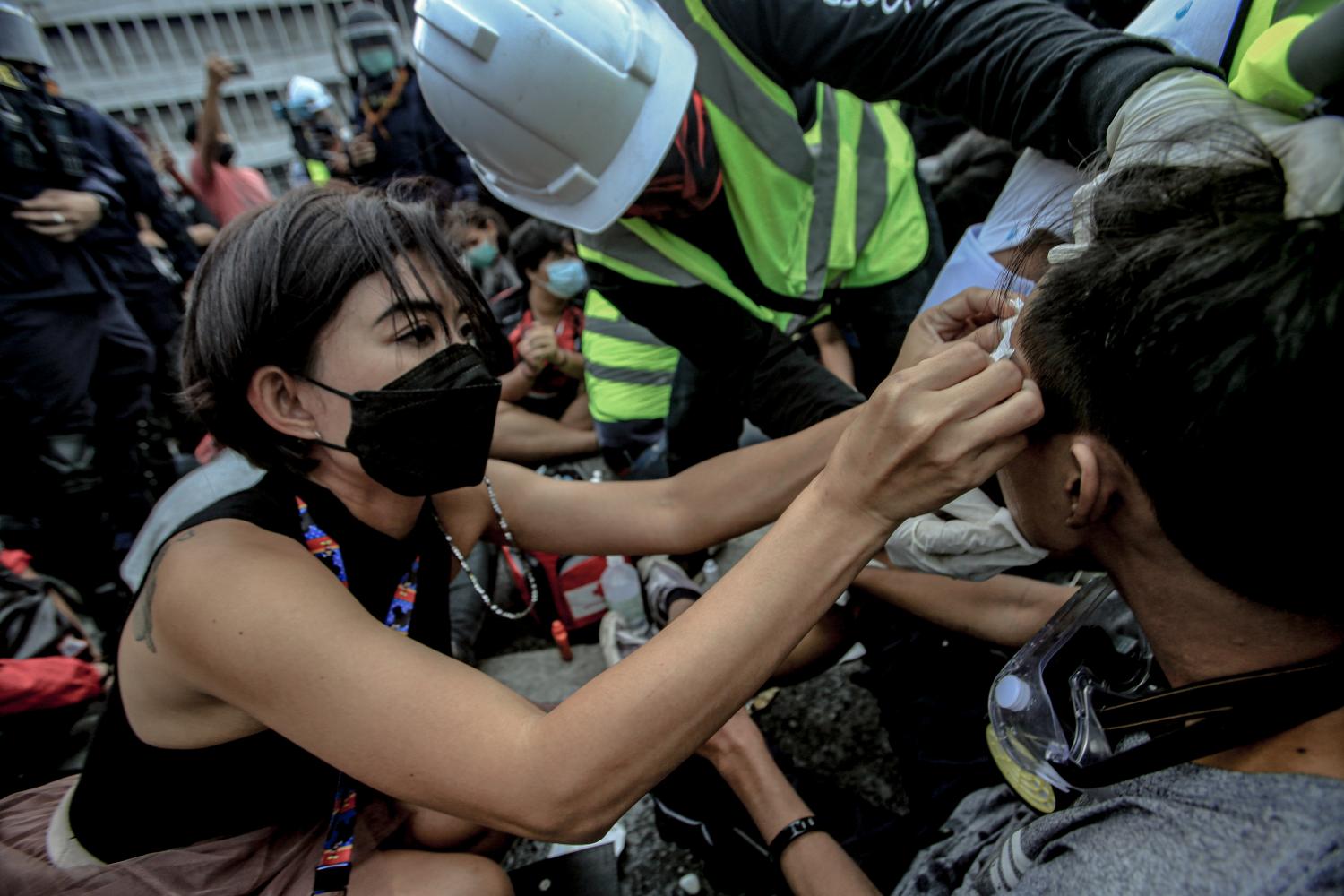 "From now on, protests are likely to occur at two places, Nang Loeng and Din Daeng, but the number of protesters will not be high. In coming days, legal action will be intensified," he said.

However, there is still controversy surrounding the case of a 15-year-old boy who was shot with a real bullet in the neck on Aug 16 who has been in a coma since. On Sept 30, police arrested a man in Kanchanaburi for allegedly shooting the teenager.

Pol Maj Gen Piya said the suspect, who stayed in a flat in Din Daeng district, was upset by demonstrators and randomly shot them.

Snowballing into tit for tat

Initially, demonstrators gathered to call for the resignation of Gen Prayut. As a result, authorities put in place containers and barricades for safety reasons as the location is close to the prime minister's residence. When protesters encroached, officers responded by using water cannons, tear gas, and rubber bullets. Since then, retaliation has ensued.

"Later on, those suffering due to the economy also joined the protests, which further led to an escalation of violence. Therefore, the area has symbolically accommodated those who are dissatisfied with crowd control officers. Meanwhile, demonstrators who have stuck to their demands have gathered elsewhere. I don't know who started the violence, but when one cracked down, the other struck back," he said.

Phichai said authorities can take the lead in de-escalating tension because they have greater potential to use violence. Crowd control officers should monitor protesters from a distance rather than confront them. Also, they should negotiate with demonstrators to find common ground.

"The situation will improve if the government has the will to resolve the problem rather than leave officers to it," he said.

Can production efficiency also be green?