All in the family, novice thief messes up, please jail me
Life
Social & Lifestyle

All in the family, novice thief messes up, please jail me

An Udon Thani man is facing serious charges after allegedly raping a 15-year-old girl whom he regarded as a relative. 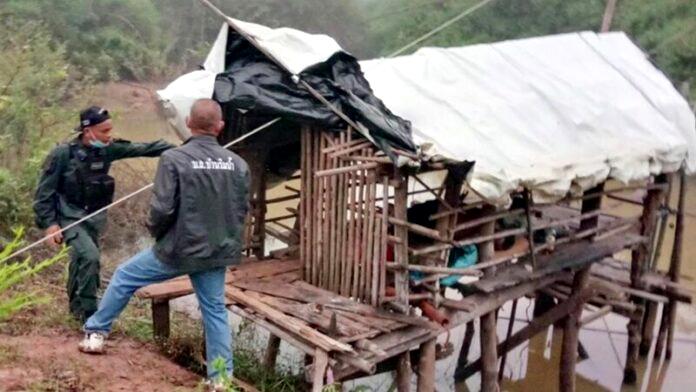 The hut where 'Taonok' took the girl

Police on Oct 2 nabbed "Taonok", aged 54, originally from Laos, following a shootout in Nong Kaem forest, near Songkram Creek, where he had taken shelter in a fisherman's hut. He was shot in the arm and cheek and is in a serious condition at Udon Thani Hospital, still unable to speak.

Taonok had taken the girl, known as "Nong A", to the hut where he forced himself on her twice. However, she managed to escape and call her mother, who alerted police.

Taonok, who has worked illegally in Thailand for 15 years, is married to the girl's grandmother, according to her mother, "Su". News reports referred to him as her "new husband", while adding they have been together for 15 years. The family feels betrayed after Taonok abused their trust by allegedly absconding with the girl and raping her.

"We gave him shelter all those years and look what he did to us," Ms Su told reporters. Taonok, who worked as a builder's labourer in Bangkok for many years, returned to the family home in Udon Thani last year. Nong A and her mother were living in Phuket until two months ago, where Ms Su worked in a laundromat, until they too moved home.

The pair's return to the family home appears to have sparked tension between Taonok and the family. "He was a slippery operator who liked to speak sarcastically, causing divisions in the family," Ms Su said.

Taonok had also taken women to sleep at the house next door, but his wife -- Ms Su's mother -- did not complain.

A man with a roving eye, he had also made no secret of his liking for Nong A, a good student who is also a drum player at her school. However, his wife forbade him from being alone with Nong A, which upset Taonok.

He told the girl at the hut that he intended to kill the rest of the family. Ms Su suspects he meant it, as on Facebook in the days before he had been counting down to the "big day".

He intended to let her go after having his way with her one more time, he told Nong A, shortly before falling asleep, when she made her escape. He said he wanted her to flee the family home. "They are trying to keep us apart," he grumbled.

Nong A, her mother said, was not interested in Taonok romantically, despite his claims to the contrary. "She simply loved him as a granddad," she said.

"He had shot his gun once in protest after relatives barred him from seeing the girl, with the result he had fled to the provinces to work."

The ordeal at the hut has left Nong A with nightmares. "When she came back home she was hiding under the bed, saying Taonok was coming to kill her," her mother said. Welfare workers and justice officials have offered the family 3,000 baht in initial compensation as well as counselling for the girl.

The saga started on Oct 1 when the family was having a meal at their grocery store at Om Kor of Ban Dung district, opposite Om Rudee Forest Park, about 7pm.

Taonok turned up in a pickup with two other women, and called out to Nong A, whom he forced into his vehicle. When she called for help, the women in the truck warned off family members who went to her aid, saying Taonok was armed. It is unclear what happened to the women, as when police found him early the next morning at the hut, Taonok was alone.

Om Kor village head Chatuwit Berkban said police, village elders and relatives searched all night for the pair until word came about 2.30am that the girl was safe. Nong A had managed to flee the hut on foot and call her mother.

The search team including Ms Su set off to the edge of a swamp where they found the girl. While her mother whisked her off home, the others ventured into the forest towards the hut, a flimsy structure with a tent draped over it.

Police pulled away the tent covering, only to hear the sound of gunfire. Taonok shot at one officer, who returned fire, hitting Taonok in the arm and cheek. The policeman was unhurt. Officers found .38 and .388 firearms inside.

Nervous robber makes hash of it

A novice thief's spur of the moment decision to rob a gold shop backfired after a security guard knocked him off his getaway vehicle. 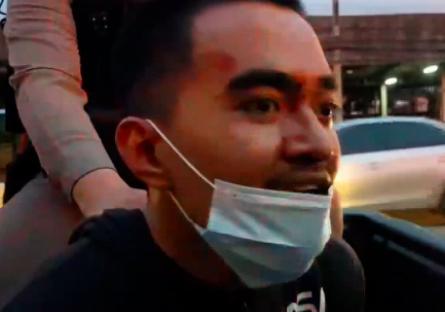 Wit Pathumyangyuen, 25, was nabbed after robbing a gold shop at the Tesco Lotus store in Samet, Muang on Sept 30. He fed the store with four gold bracelets worth 340,000 baht, armed with a paper cutter he had bought shortly before.

Moments before, he told security guard, Noppadon Thummanon, 51, that he would kill everyone in the shop if he didn't cooperate and fetch for him the gold jewellery. He was wearing a jacket with a hoodie covering his head but had still managed to scout the shop for some moments without attracting suspicion.

"He had his hand in his pocket and it looked like he would pull a weapon out," Mr Noppadon said. However, another guard saw what was happening and came to his aid.

Seized by panic, Mr Wit pulled out the paper cutter, threatened staff and jumped over the counter. He grabbed the jewellery and ran from the shop, with Mr Noppadon in hot pursuit.

He jumped on his motorcycle to escape. However, Mr Noppadon managed to grab the rear vision mirror and turn the bike on its side. Mr Wit tried to flee on foot, but the guard called on passers-by to help. They jumped on the robber and held him until police arrived.

TV footage showed Mr Wit with a heavy limp and bruised face as he was taken back to the store for a crime reconstruction. The young man told police he worked as a food deliverer in Bangkok before losing his job.

He had an online gambling addiction and made the day trip to Chon Buri on a motorcycle borrowed from a friend. He had earlier asked his parents to lend him 3,000 baht but they refused.

"I am just fed up," he grumbled. "At first I wanted to find a place to end my life but when passing the store decided to rob it and send the proceeds back to my family," Mr Wit said.

His father, who visited him in a police holding cell in Chon Buri, denied the family was poor, saying his son acted out of spite. He had exchanged angry words with his son when he asked for the loan, he said. Mr Wit, he said, was also high on Alprazolam, an anti-anxiety drug. Police charged him with theft.

Motor thief wanted to get caught

An ex-inmate in Songkhla is breathing a sigh of relief after police nabbed him for theft, saying he had wanted to return to jail for months after his girlfriend rejected him. Somchai "Bao" Kaewklab, who was jailed for theft two years ago, was nabbed on Oct 2 after stealing two motorcycles in Hat Yai. The owner of one of the bikes noticed him riding it on Suntiwithi Road and alerted police.

Mr Bao said he stole one bike from outside a house on Sept 24, and the other from a motorcycle repair shop on Oct 1. He hid one in forestland in Village 9 of Ban Phru. The other, he carried on riding about town, in the hope someone would notice.

The ex-inmate said he had decided to turn over a new leaf upon his release from jail a year or so ago, but after running into family problems decided he would like to go back behind bars instead.

Before stealing the bikes, he visited his girlfriend to see if the two could get back together. However, her mother said the young woman had since found a new man. He felt disheartened and put out, he said.

"A year passed, and I still could not accept it, so I went back to stealing," he told police.

Mr Bao said he would rather go back behind bars than have to deal with the reality that his wife had someone else. After taking the bikes, he did everything he could to catch the police's attention, with no success.

"I walked in front of a CCTV camera as I was wheeling away the first stolen bike, but no one came after me," he said.

CCTV vision, recovered since his arrest, indeed shows him walking slowly past the camera as if to advertise his crime. The only thing he didn't do was give police a wave.

After the first theft failed to do the trick, he stole another bike. Finally the owner noticed, and alerted police. When they nabbed him, Mr Bao finally got his way.

Speaking at the station, he said: "I want to tell my girlfriend that I hope they stay together a long time, and are happy.

"As for me, I'm going back to the clink as I do not want to know about her life any more." Police charged him with theft.