published : 11 Oct 2021 at 04:30
newspaper section: Life
writer: Thana Boonlert
The existing office building will be demolished to make way for a green space and a parking area for staff opposite the new annexe. US embassy

Inspired by Thai architecture, the United States is building a climate-resilient annexe at its existing embassy compound in Bangkok to upgrade consular and diplomatic activities.

Due to be completed in 2025, the 14-storey building will be a public symbol of Thai-US relations. The project will cost US$625 million (21.1 billion baht) and employ around 2,000 workers throughout the construction period.

The annexe will be added to the original US embassy building, built in the 1960s. A new chancery replaced it in the 1990s, allowing the original site to be reused to increase functional space.

"This new building is another sign of our continued commitment to Thailand," said Chargé d'Affaires Michael Heath, at the groundbreaking ceremony on Oct 7. It is a new milestone in a relationship that marked two centuries in 2017.

The new annexe will house US agencies currently located across Bangkok -- where staff have regional responsibilities -- and provide consular services for travellers and expats.

"The existing office building is about 70 years old. It has had a couple of modifications. It is pretty much at the end of its life. We are building a new one to collocate everybody," said Allan Ford, construction manager for the US State Department's Bureau of Overseas Building Operations.

Ford said two salas (pavilions) will be removed for restoration and reinstalled. Some parts, like gables and handlebars, will be kept. Also, the new water feature will replace the current klong (canal) system.

"It was built around 50 years ago. The wall panel is eroding. From a distance, it looks beautiful but when you get close to it, you will see the need for this project," he said. 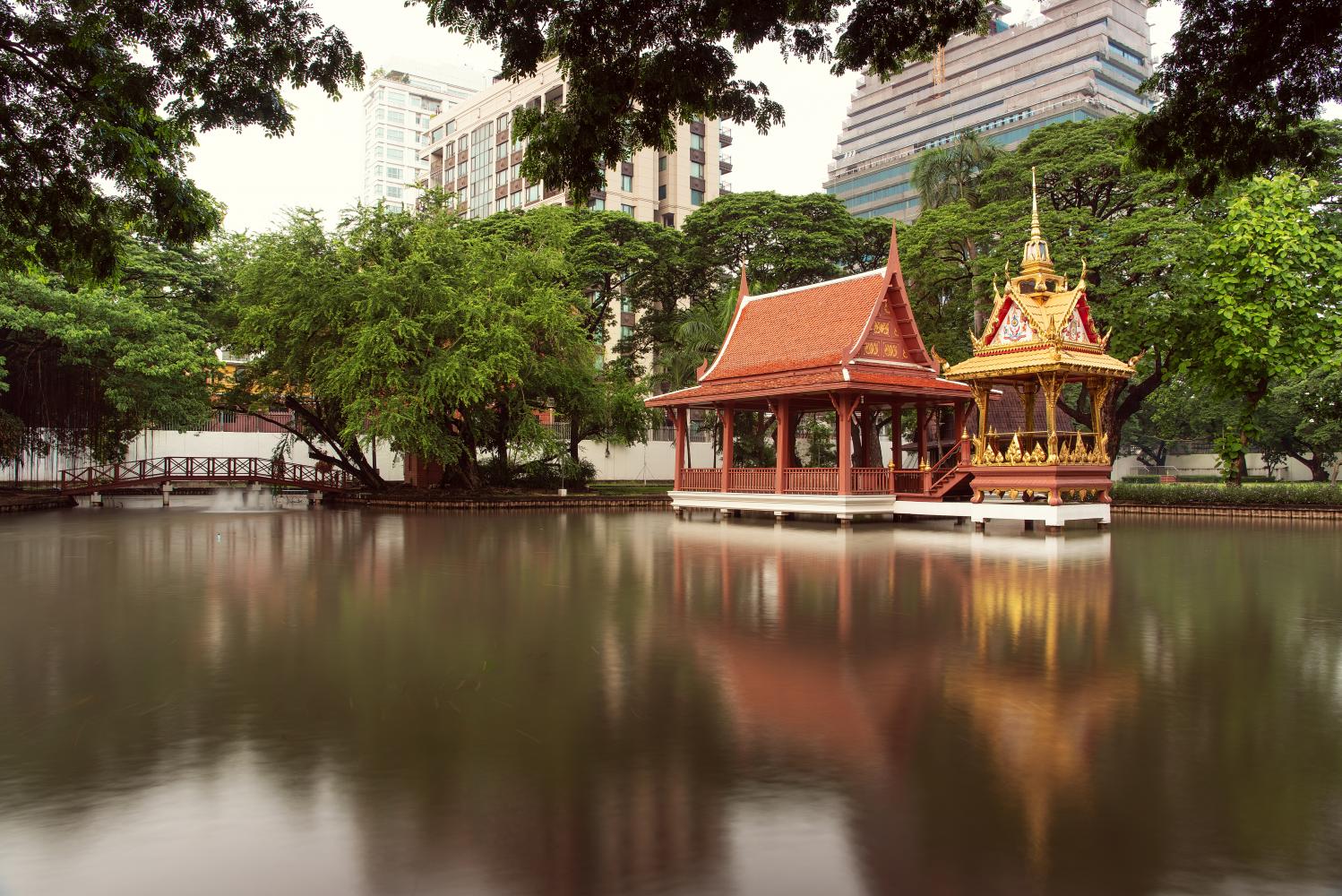 Two sala  s, or pavilions, will be removed for restoration and reinstalled. US embassy

However, the design of the new building is challenging because it must reflect American and Thai culture. Architects explored inside and outside the city many times to develop a sense of place, which is crucial for the design. They learned the vernacular style from cultural sites ranging from traditional buildings in Bangkok to the ruins in Ayutthaya.

"Even though we don't speak the language, we feel like we have a good sense of Bangkok," said Christopher Sharples, the founding principal of SHoP Architects, a New York-based design firm.

When the team first visited the city, they were struck by the symbiotic relationship between urban residents and nature in community areas ranging from lush parks and markets to mid-door space and wild animals.

"It is not the kind of energy you necessarily see in American cities. We do have nature, but it [Bangkok's nature] seems much more symbiotic with the environment," he said.

Sharples noted that Thai architecture is characterised by openness. Structures like verandas and porches can promote natural ventilation. Influenced by these vernacular elements, the team used the chain arrangement to create a self-shaded outdoor community area and divided the annexe into a public space and private offices.

"In the lower part, we have created what we call an open village, allowing for the breeze and a double-height space for workers and visitors. The first six stories are comparable to the height of the rain tree. However, as you go higher, you start to enter the skyline of the city. That is where the tower takes it the defined shape," he said.

Influenced by the northern Lanna style architecture, the entire building will sit on a plinth to keep itself safe from flooding during the rainy season. It seems to float above the landscape.

Sharples said that unlike other glass skyscrapers, the new annexe will use the facade screen with bronze aluminium columns to mitigate sun exposure and reduce energy consumption. Also, these columns can appear darker or brighter at day and illuminate at night.

"When you see temples on the hill, they just glow. We really want to capture the idea of how the city comes to life at night," he said. 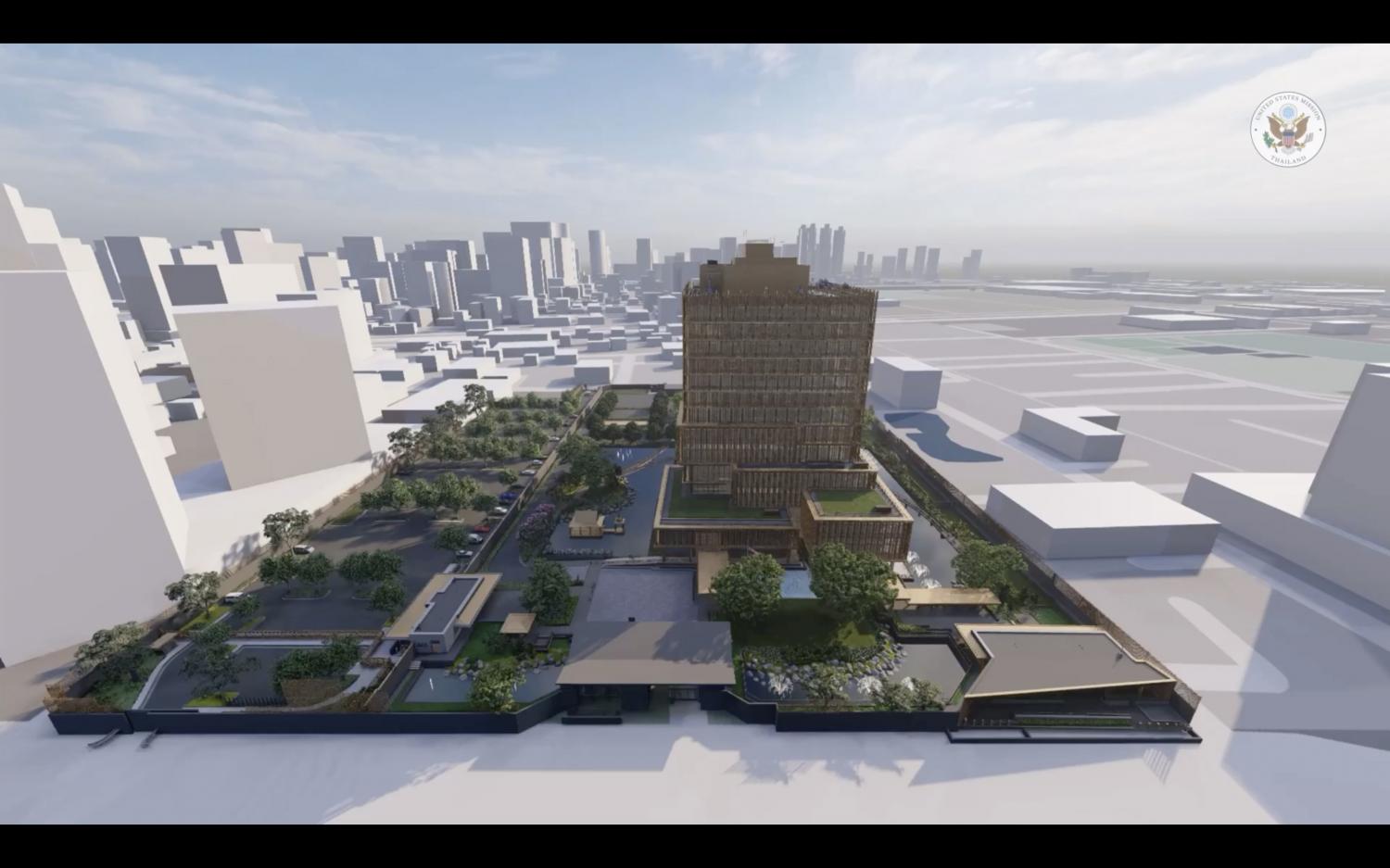 Wat Suthat is one of the temples in the capital that inspired the team. Its facade and column-supported arcade were translated into the exterior screen for the new annexe. Its warm colour shines like a translucent veil in a dramatic play of light and shadow. Up close, they come in three different shapes commonly found in the city: bells, leaves, and vines that hang from rain trees.

Nadine Berger, the associate principal of SHoP Architects, said that the design of the building must address many complex issues at the same time. The team has had to balance the need for a large space with landscape preservation and climatic conditions. Many rain trees have been preserved in the open space adjacent to the building. The klong is used for stormwater management and water reuse. While rainfall and runoff are released into the klong, greywater is cleaned and used for drip irrigation.

"You don't necessarily see them right away but they are incorporated into the design to achieve resilience and a sustainable environment," she said.

Once completed, the annexe will also be another urban wildlife sanctuary in the city, adding to neighbouring Lumpini Park. Accompanied by the sound of water, visitors will be able to walk through shaded paths that overlook the lush vegetation. "The building will showcase environmental stewardship," she added.