When gentle persuasion won't do 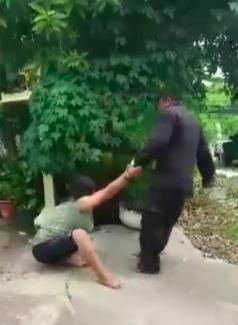 A volunteer policeman in Buri Ram handcuffed his estranged wife and dragged her into a forest to "clear the air" after she left him.

Ban Yang police arrested Amnat "Chang" Jeanrum, 48, late on Oct 7 after an eventful day in which he held Sagniam Sukor, 60, captive for several hours when she refused to let him back in her life.

Mr Amnat turned up at her younger sister's place in tambon Chum Hed, where Ms Sagniam had spent two months recovering from an illness, to plead with her to resume their relationship, without success.

Making no progress with the gentle approach, he handcuffed her, and cuffed himself to her, before dragging her down the road and disappearing into the forest. Neighbours watched passively, one even filming the encounter on a phone.

The saga sparked a lengthy search by police which ended when Mr Amnat released her about 7pm and handed himself in later the same night.

Ms Sagniam, who was exhausted, bruised and scratched but otherwise unharmed, said she deployed "psychological techniques" to persuade him to let her go.

"He told me that if I didn't let him back he would kill me. I wanted him to cool down so said I'd agree but only if he let me go first."

He had threatened her with a knife, she said, but denied media reports he had stabbed her.

Mr Amnat blew her a kiss as he let Ms Sagniam go outside the house. A neighbour who spotted him tried to stop him fleeing, without success. "I blocked his path to stop his motorbike leaving and we exchanged blows. But Amnat is much bigger than me so I had no chance," the neighbour told reporters ruefully.

Mr Amnat was able to flee before finally giving up later that night when he turned up at an emergency kiosk in Muang district, about 3km from the scene, seeking food.

Ban Yang police took him into custody and seized as evidence the handcuffs and the knife.

Ms Sagniam said she ended their 18-year relationship after Mr Amnat repeatedly beat her when she refused to hand over money to feed his drug habit.

After one nasty beating in full view of the neighbours, the village headman made them sign an agreement vowing to separate. However, Ms Sagniam's daughter, Thanaporn, (assumed name), 42, said Mr Amnat would sneak back pleading with Ms Sagniam to change her mind. He had threatened to kill her mother many times, she said.

Recounting her ordeal, Ms Sagniam is adamant he will not re-enter her life, despite what she told him in the forest.

"I don't like it when he's high on drugs. He starts hallucinating. I want police to charge him," she said, while complaining that locals did nothing to help her even as Mr Amnat dragged her cuffed along the ground.

Mr Amnat said he missed his wife and decided to take her captive after she refused to talk. "I just wanted to clear the matter and would like to apologise," he said. "It was a spur of the moment thing and I didn't mean any harm."

Police gave him a drug test, which turned out positive. They charged him initially with taking illegal drugs, and sent Ms Sagniam for a medical check-up. Further charges are likely.

The widow of a man who killed himself after stabbing to death a fling in his daughter's place says she is shocked to discover her husband was playing around. 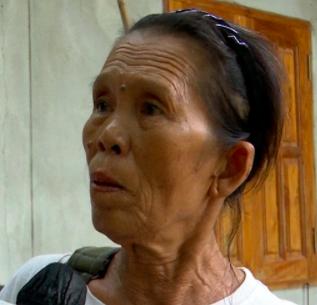 Trader Pankaew Ngampor, 68, died in a single-storey block house on his family property in Pa Sak, Wang Chin, of Phrae province on Oct 8. When his wife found him he was foaming at the mouth and still alive, though he died shortly after.

Beside him was the naked body of a woman, Sarika Peekkam, 42, who had been stabbed 15 times. While police found a 20cm fruit knife by her side, they found no sign of whatever poison Pankaew may have taken to end his own life.

They suspect he may have stabbed Sarika before taking his own life. Both bodies were sent to Phrae hospital for an autopsy.

His wife, Niang Ngampor, 66, made the shock discovery after her husband, with whom she runs an eatery, failed to turn up for lunch at their shop in the village as was his custom. The pair would normally get up at 4am, prepare food for the day, and have breakfast before her husband went back home about 8am. At midday, he would return to the shop for lunch.

On this day, however, he did not show, and Ms Niang recalled an odd comment he had made that morning when he said: "If today I die, please return the motorcycle for me. I don't know whether to die or flee."

She replied, "What's wrong with you? Why will you end up dead? Where will you flee?" He replied, "I don't know."

After Pankaew failed to show, Ms Niang went back home to look for him. He wasn't there. Next, she tried their daughter's place in the same compound, which is normally empty as she now works in Bangkok.

The concrete block cottage was locked from the inside, but she could hear a fan going. The occupant had also strung up fabric inside to stop people outside peering through gaps in the blocks.

Ms Niang called on neighbours to help and together they forced open the door. She found her husband foaming at the mouth, presumably after taking poison. The village head called rescue workers, but Pankaew died soon after.

While Ms Niang is baffled about why her husband would want to kill himself, she can grasp the remark about the motorcycle.

He had bought a black Honda Wave three months before. If he wasn't around to pay it off, he wanted her to return it.

She suspects her husband and his fling may have argued over money. Ms Niang said she knows Sarika, who moved back to the village a couple of years ago after divorcing her husband.

Her place is about 300m away, so they were virtually neighbours. However, she did not know that Ms Sarika, also a customer at her eatery, was seeing her husband on the sly.

"I suspect he went into debt to support her and when they ran into problems paying it off, they argued and it ended in their deaths," she told reporters.

Pankaew, she said, owed informal loans which he was paying off at 600 baht a day. Her husband didn't say where he borrowed the money, or why.

However, now his affair has come to light, she suspects that he was quietly supporting Sarika and may have reached the limit of his help. "I never received any benefit from that money," she said.

While she feels saddened that her husband was unfaithful, she said she will ask the spirits to forgive the pair.

"Neither gave me any cause for suspicion. My husband kept helping me as usual, and Sarika talked to me normally at the shop. I suspect they had sex first as she was found naked, which upsets me.

"However, I would like to say to their spirits that if they loved each other, I hope they are happy together and can meet again in the next life," she said.

Village head Songkram Konkuan said Pankaew and Sarika had been seeing each other for about a year.

A neighbour said there are only three houses in the street so visitors tend to stand out. Locals had seen Sarika visiting Pankaew's place often since the start of the year. She would visit during the day while Ms Niang was running the shop, often bringing food.

An ex-inmate caught thieving from city apartments would go around trying the door handles of places he targeted and let himself in if he found one unlocked. 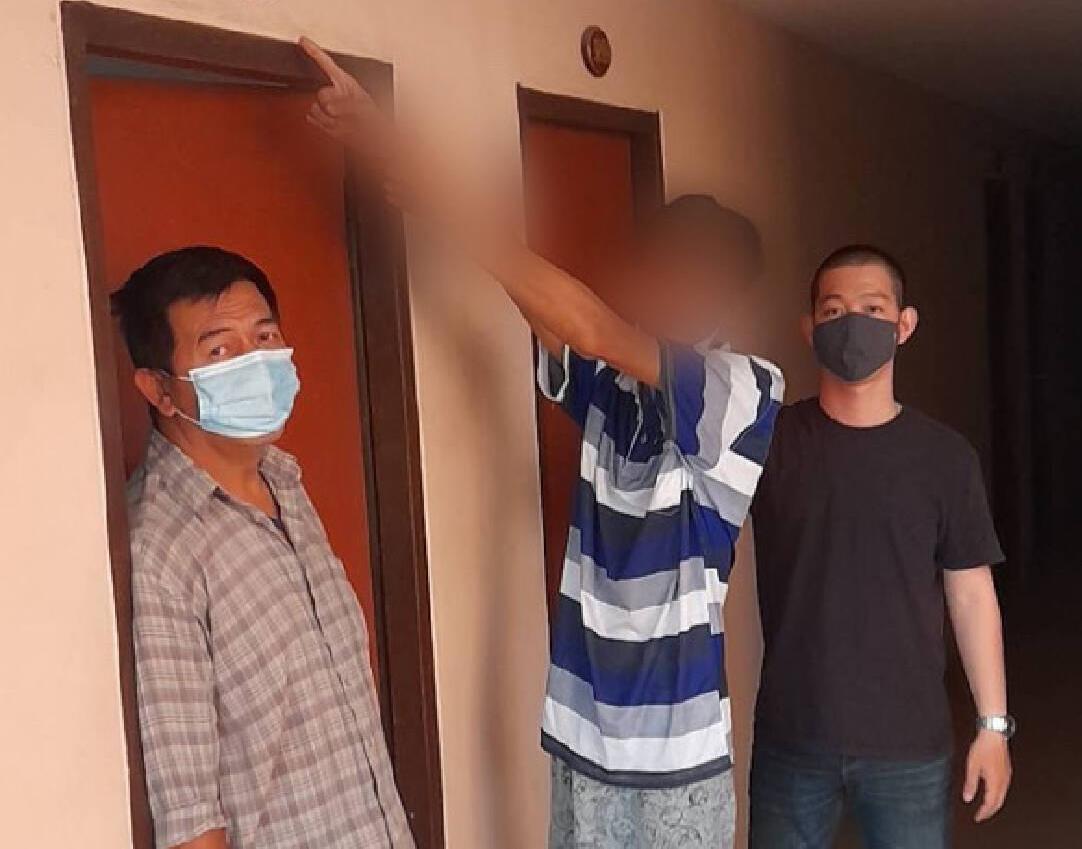 This unusual method of robbing people yielded results though also carried risks if CCTV cameras spotted him. So it was when Bang Na police on Oct 6 nabbed Thawatchai "Mack" Wongsri, 29, in Nong Bon, Prawet, where he had taken shelter after robbing his latest victim several days before.

The victim, aged 53, who contacted police on Oct 3, said she was taking a shower when a man brazenly entered her apartment and stole two gold necklaces worth 25,000 baht, a gold ring worth 6,000 baht, and 2,000 baht in cash. She lives in soi Bang Na Trad 30, and had left the door of her apartment unlocked. By the time she came out of the shower he had gone.

Police checked security cameras and identified the robber. Further clues led them to an apartment where Mack had gone into hiding. They also found some of the stolen goods. Mack, who admitted taking them, said he was released from jail late last year after serving time for trespass and theft.

"I didn't think of taking up a job but went back to stealing," he told police frankly, though he claimed to have tried the doorknob method only twice.

He would travel around looking for potential targets in the Bang Na, Phra Khanong, Prawet, and Samrong Nua areas, he said.

He preferred places with loose security arrangements but if he was stopped he would claim to have friends at the apartment.

Bang Na police are sceptical about his claim to have reoffended just twice since being released, as checks show he has been caught on drug offences more than 10 times, and for theft three times. They have charged him once again with theft.