Stuffed in a hole

The stench of rotting flesh gave away a carefully concealed murder in Kanchanaburi where the body was stuffed in a mountain crevice and entombed with a large boulder. 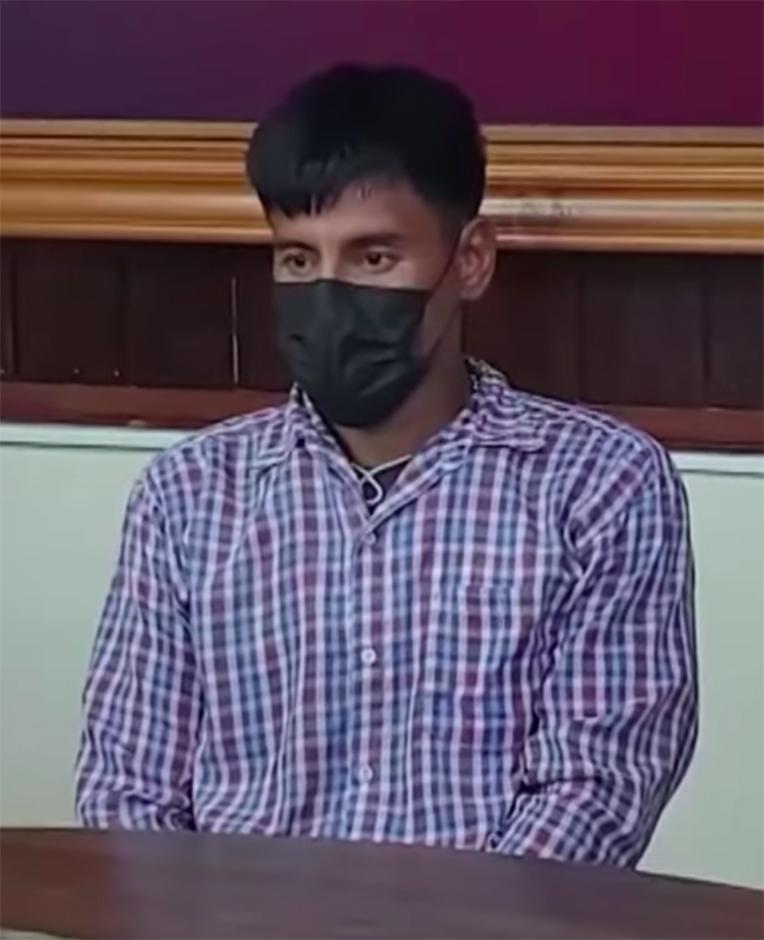 The confessed killers, brothers-in-law Thanit "Ball" Wangkum, 37 and Rung Bunmorn, 36, lured Bancha, a friend of theirs, to the base of the Ban Pong Ri mountain, in Village 6 of Nong Ri sub-district, to discuss a debt he owed Mr Rung.

While the pair called Bancha to the spot to clear the air, things didn't go well. Mr Rung said Bancha cursed and hit him, so he shot Bancha with a modified shotgun belonging to Mr Ball which they brought along in their truck. He shot him three times in the chest and asked Mr Ball to help him dispose of the body, which they hid in a crevice up the mountain.

Rescue workers retrieved the body on Oct 13 after relatives who went in search of Bancha noticed a foul smell. They found Bancha stuffed in a tiny gap about 30cm high, 1.2m wide, and 1.5m deep. The killers had placed trees, leaves and rocks over the mouth of the crevice to disguise it.

Rescue workers from the Bo Phloi Ruam Jai Association lowered themselves down the mountain on a rope to reach the spot, and asked their smallest member, Panya Kitbanjong, 22, just 155cm tall and weighing 54kg, to edge himself inside and pull out the body. He also had to remove the rocks at the mouth of the hole, including one large boulder weighing about 100kg.

Mr Panya said Bancha's body was covered with a hessian bag, and his arms and legs bound with rope. The young rescue worker said he squirrelled into the tight spot, and pierced a hole with a knife in the dead man's trousers. He put a rope through the hole and pulled him out. 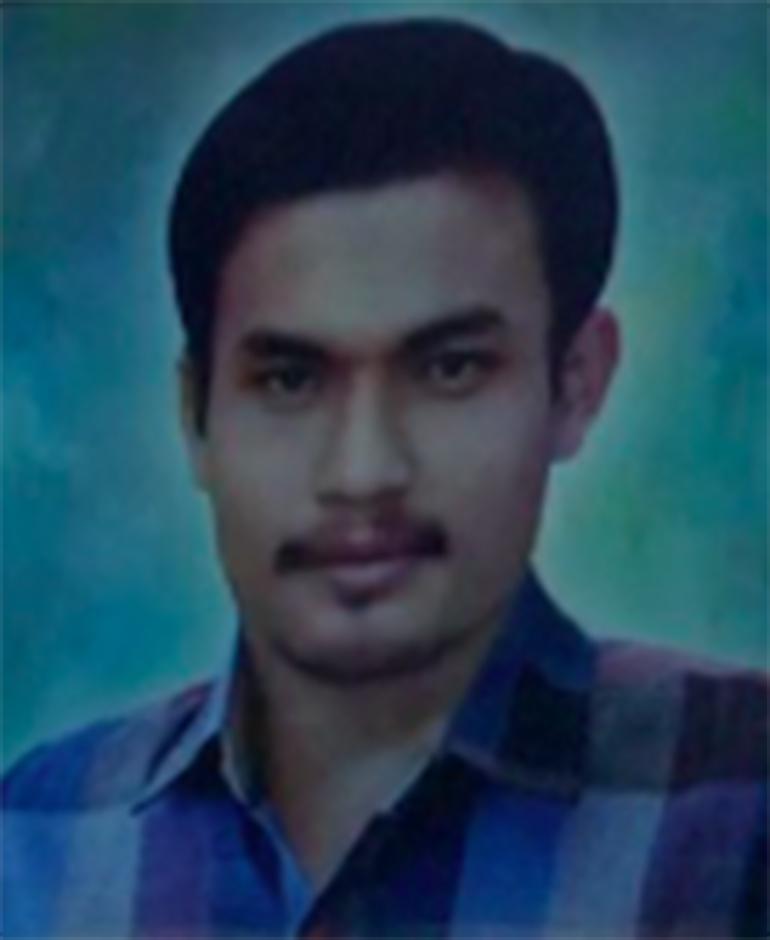 Bancha's family alerted Nong Ri police on Oct 11 to say he left home to pick mushrooms in the forest two days before and had not returned. When news of the body's discovery spread, Mr Ball and Mr Rung, who raise cattle, fled home.

Mr Ball handed himself in to police two days later, saying while he was present at the scene he did not pull the trigger. On Oct 15, police nabbed Mr Rung next to a pig sty in Lat Ya, Muang district, where he had gone into hiding. He admitted shooting the victim using Mr Ball's gun.

After disposing of the body, the pair bundled Bancha's motorbike on the back of their farming truck. Mr Ball dumped the bike in a waterway in Phanom Thuan district, and parked the truck at Don Salaep, Huai Krachao district, before the pair split.

Bancha's father, Sukkasem Klinkesorn, 60, said he suspected his son would get into trouble with Mr Ball, whom he met late last year. Two months later, he said, Mr Ball turned up at the family home demanding Bancha repay a debt of 70,000 baht. Bancha insisted the debt was just 13,000 baht, and gave Mr Ball a bundle of timber in lieu of money owed.

Mr Sukkasem said he suspected Bancha, who took drugs, may have run up a debt with Mr Ball to pay for his habit. "I warned my son to keep his distance from him," he said.

Patchya Klinkesorn, 60, Bancha's mother, said she treated Mr Ball as a family friend and is saddened to hear about the role he played in her son's death. "I offered him a place to stay some nights, and gave him food."

Reporters also visited Mr Rung's mother, Udom Chuarung, 55, in Nong Ri. She said Mr Ball and her son carried on raising their cows as normal after the victim went missing. However, when word came that police had found Bancha's body, they fled. 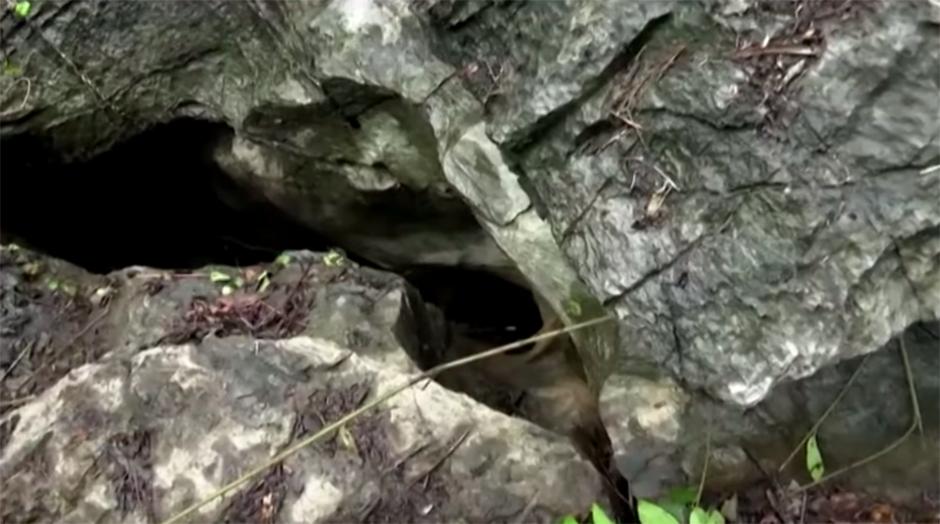 The crevice where the body was stuffed.

Like Mr Sukkasem, she suspected drugs played a factor as both the victim and Mr Rung took them. "My son may have been under the influence at the time. He's not all there anyway owing to an accident," she said frankly.

Pol Col Banjong Amrit, deputy head of Kanchanaburi police, and acting head of Nong Ri police, says Mr Ball admitted he and Mr Rung were close to the victim, but had fallen out over debts and drugs. The pair were charged with intentional killing and disguising a corpse.

Taking one for the girlfriend

A contract worker from the South who shielded his lover from gunfire ended up getting shot to death himself. 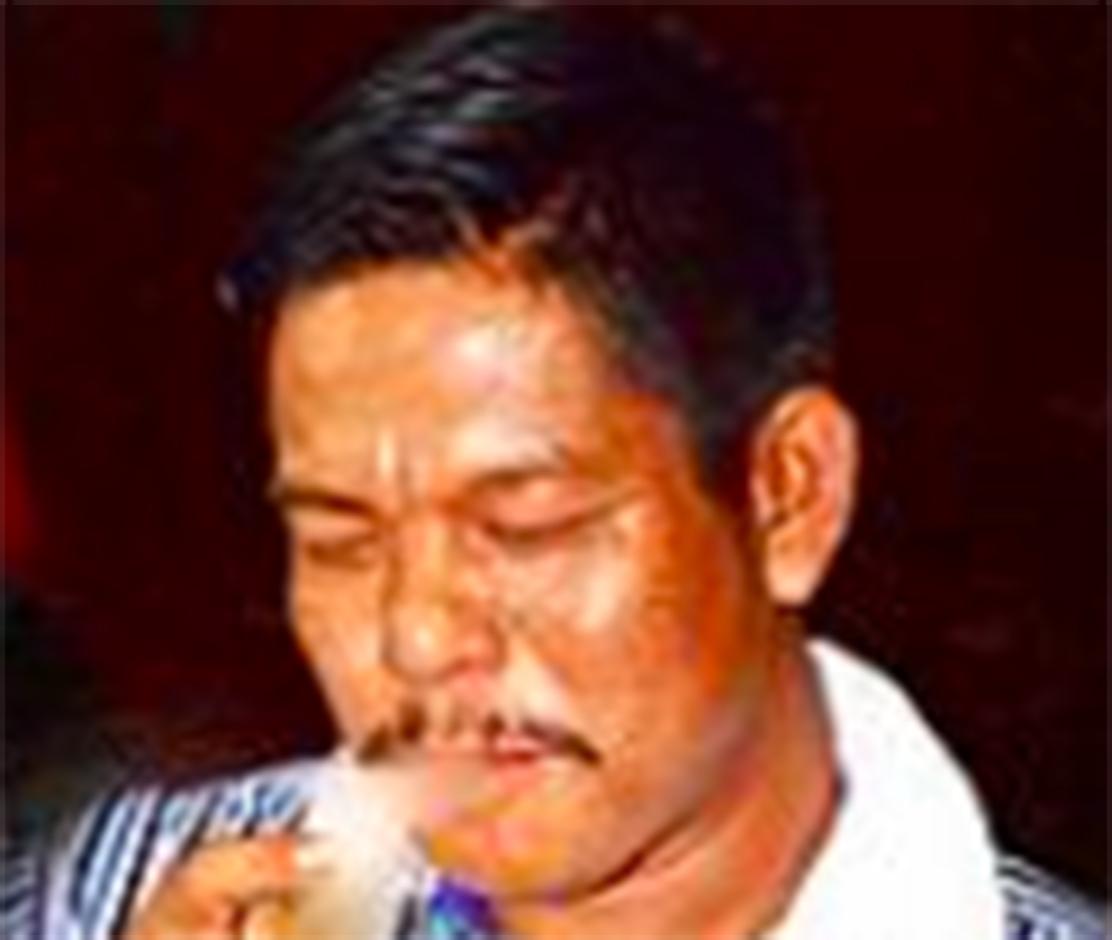 Kittipak "Don" Promduang, 45, was shot in the head as he and friends were drinking in front of a block of rental apartments in Village 3, Phu Kham, Wichian Buri of Phetchabun, on Oct 15. The alleged killer, Preecha Nuamcherm 52, a friend of the group's, had turned up at the spot fronting Highway 21 (Saraburi-Lom Sak) and started drinking with them.

After accepting a sip from someone's drink, he approached the woman in the group, known in media reports as "Kaew". Giving no prior warning of his plans, he pulled out a gun and aimed it at her head. However, Don, who saw him take aim, quickly swatted the weapon away.

Mr Preecha was no fan of Don's, as the two had laid rival claims to Kaew and are thought to have argued shortly before. Undeterred, Mr Preecha aimed the weapon at Don instead, shooting him three times in the head before fleeing, witnesses said.

Kaew, a former waitress, was sitting with the group on the tailgate of vehicles parked outside the apartment. They had just finished work and were farewelling Don, a contract worker. He had wrapped up a construction job nearby and was about to return to his home province of Phatthalung the next day.

Media reports say Mr Preecha, a local man, was upset that Don, a visitor to the area, had laid claim to Kaew. 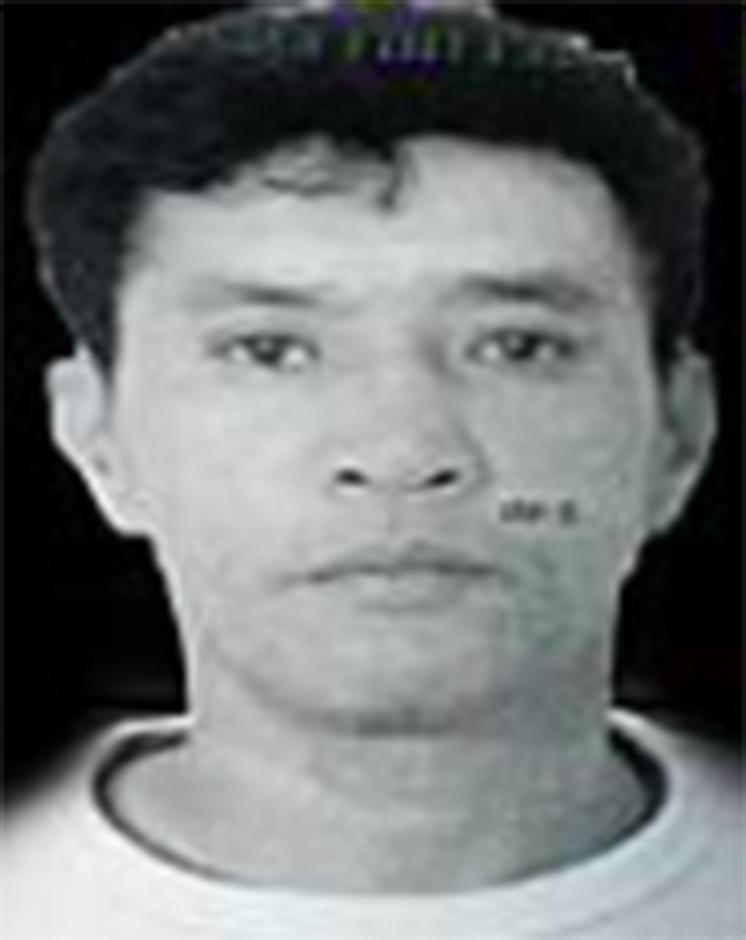 Mr Preecha, also identified as Anucha in some reports, owned a karaoke joint in Phetchabun which had employed Kaew for a couple of months. He would drink with her and also let her sleep over at the shop. His family knew of the relationship and thought he was besotted with Kaew, buying her gifts whenever he could.

Chatree Deetakob, 47, said he had just finished work on Oct 13 when he returned to his apartment. He saw Kaew drinking with Mr Preecha, Don, and another friend, identified as Pongthep Sukkasem, 46. About 7pm, he heard the sound of a gun going off, and came out for a look. "I saw Preecha aiming the gun at the victim and saying 'time to die, you bastard'."

When gunfire broke out, Mr Chatree said, Kaew fled into his place. Mr Pongthep tried to stop the killer but he paid no heed. After shooting the victim, Mr Preecha fled in his saleng vehicle. Police are looking for him.

Mr Chatree said Don had started seeing Kaew about a month ago. About two weeks ago, Mr Preecha turned up to see Kaew at Don's place, which led to a scene. "Preecha was dragged out and forced to flee in his salang," he said.

He said Don and Kaew went out for a meal before the shooting. He suspects Mr Preecha ran into them and they argued. Mr Preecha followed them to the apartment and shot Don out of jealousy and anger, he said.

Maew (assumed name), Mr Preecha's younger sister, said he had since gone into hiding, though he had returned home briefly. "He said the victim and Kaew ridiculed him for coming from a poor background. Both tried to shoo him away," she said. Her brother had known Kaew for about a year.

Phu Toei police chief Pol Col Theerapong Polnak said Kaew was reluctant to talk, as Mr Preecha had threatened to come back and kill her.

Rescue workers in Bangkok were thrown an unusual challenge -- removing a metal bottle opener stuck on a man's penis. 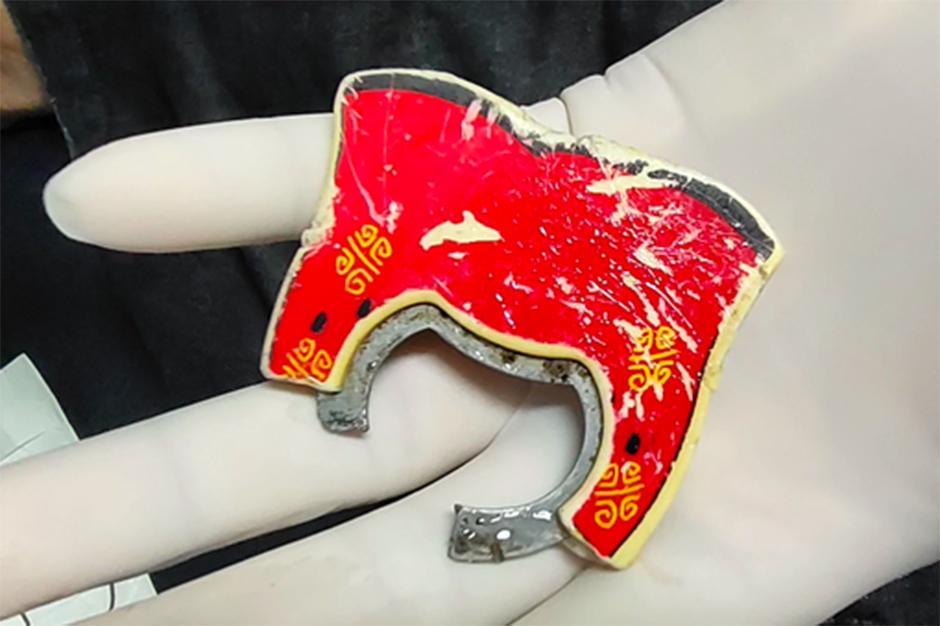 The bottle opener after its removal.

The man, aged in his 40s, sought help at Somdet Phra Sangkharat 19 hospital in Klong San on Oct 11 after he inserted the opener around his penis but the device lodged itself there.

The man said he applied the device in the hope it would make his penis bigger, which of course it did, though only through swelling as the man tried desperately to pull it off, without success.

Doctors at the hospital say none of their equipment was suited to the job. They thought rescue workers might have the cutting tool they needed so contacted Khun Rattanavudh Rescue, which sent volunteers to help.

When they arrived the man with the swollen penis was waiting anxiously on a bed.

News images showed the volunteers crouched over the patient like dedicated surgeons, as they went to work with a tiny metal cutting tool like a circular saw. After an hour's struggle, they managed to remove the device. "I put it on after a friend said a bottle opener around my penis would help boost its size," the patient said later.

Panit Srinuanchan, 20, one of the rescue volunteers, said removing the opener was a painstaking and delicate process, as the metal was pinching the man's skin and volunteers did not want to cut him by mistake. "We decided we would have to cut it off slowly, piece by piece," he said. Doctors who examined the man declared he had suffered no serious damage.