Chinatown preserves its past
Travel

It became more convenient for local folks and tourists to travel to Bangkok's Chinatown after the Wat Mangkorn MRT station opened in late 2019, giving Charoen Krung Road a sense of urban life. 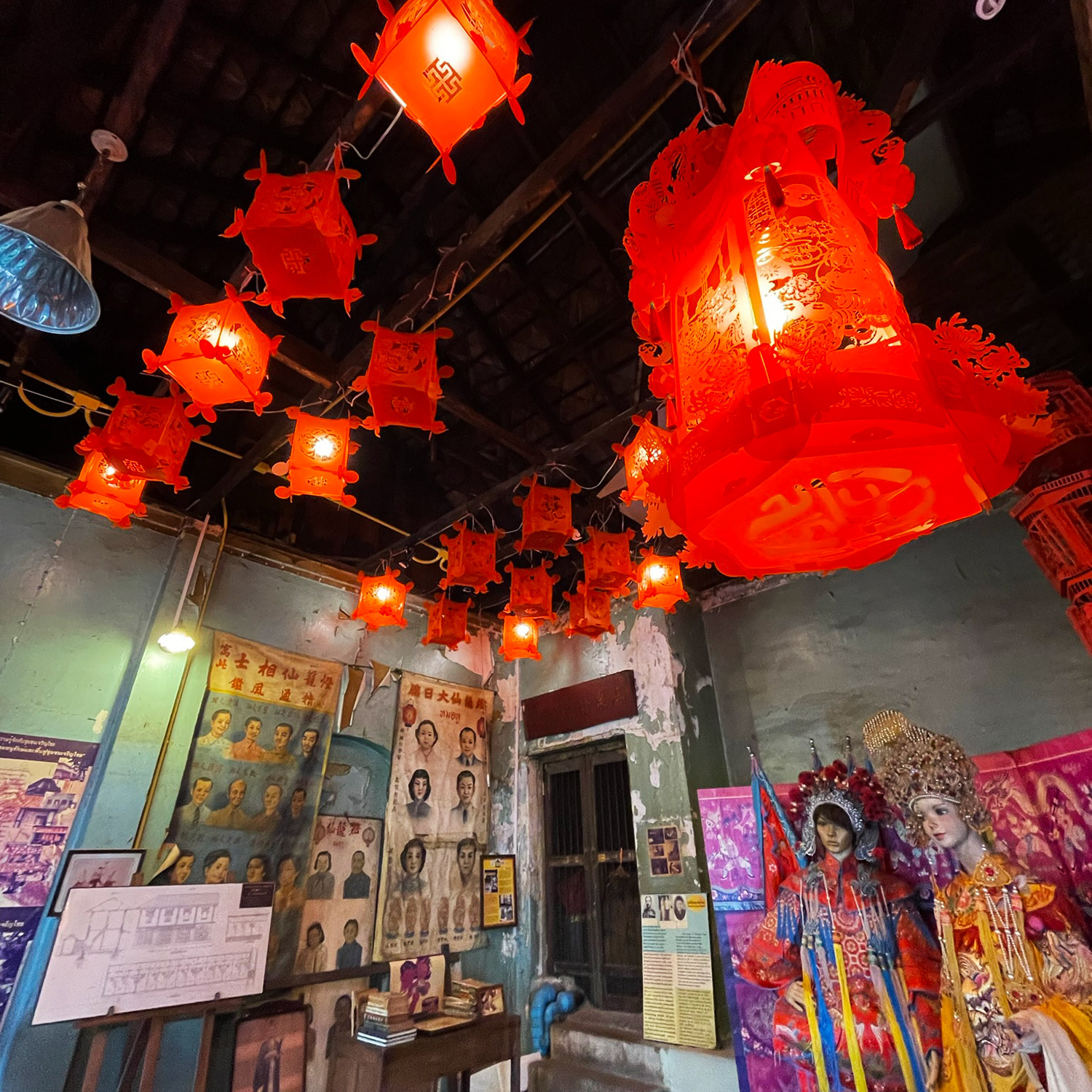 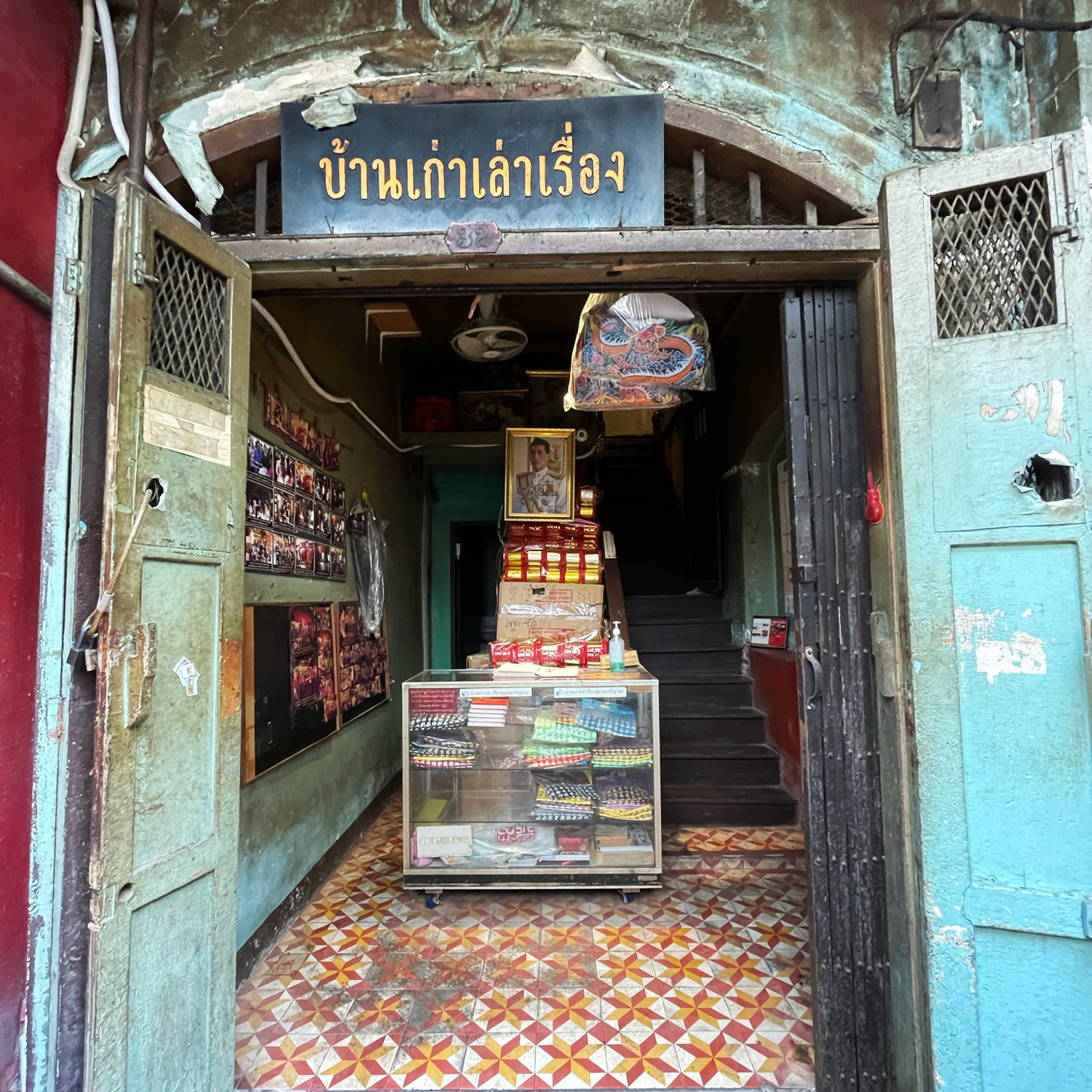 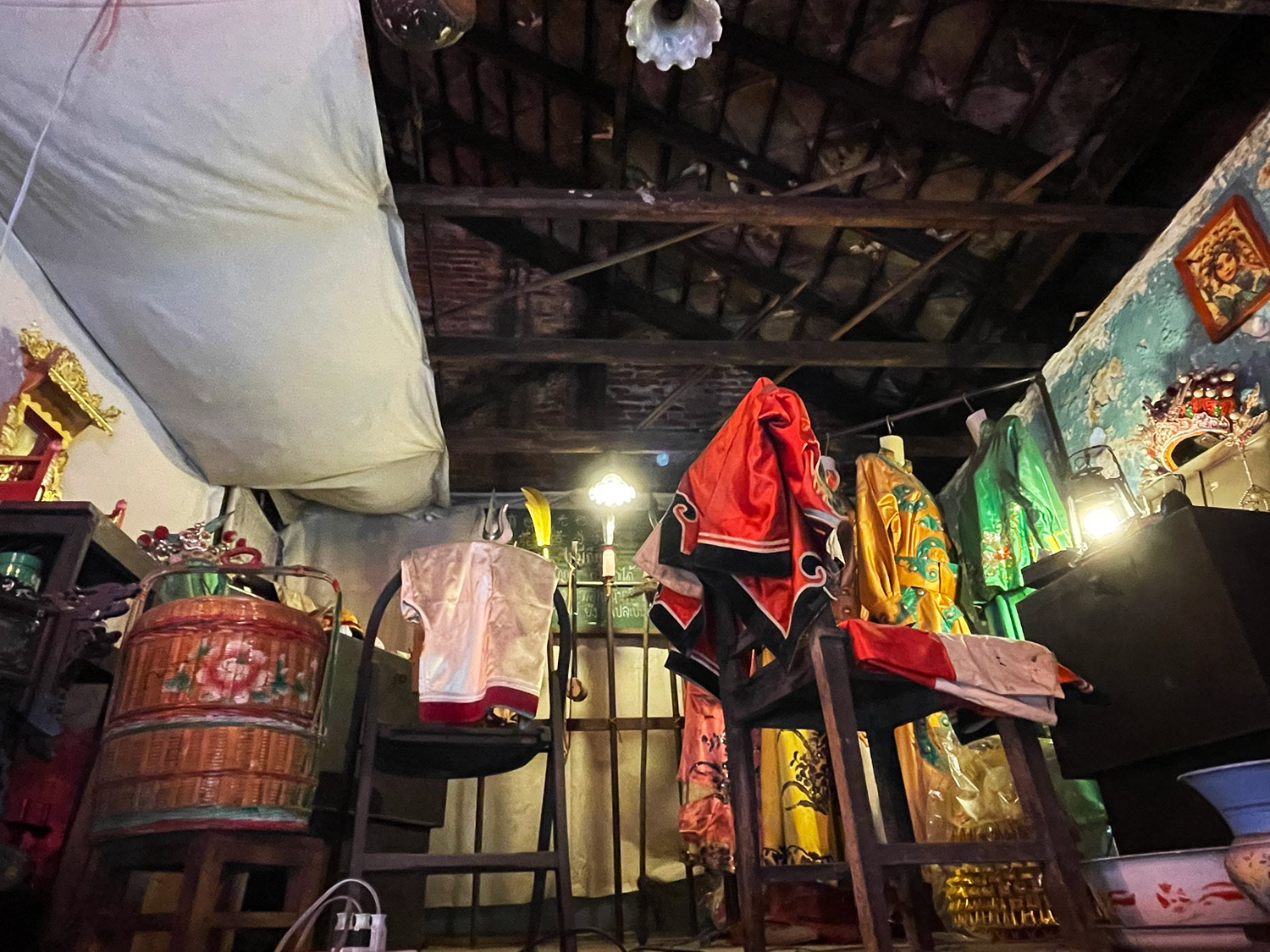 The Charoen Chai Conservation and Rehabilitation group has transformed an old shophouse into the Baan Kao Lao Rueng museum to recount the history of the Charoen Chai community.

Some of the original shophouses have been replaced with a community mall and others were converted into chic Chinese-retro cafes, modern Chinese-style eateries and sleek hotels. While the neighbourhood is becoming contemporary, the century-old Charoen Chai community has managed to maintain the attractive Chinese-Thai traditions.

Tucked away in a narrow lane of the joss paper stores and street food stalls, an old house has been transformed into the Baan Kao Lao Rueng museum, where young descendants can trace their origins.

During the reign of King Rama V, this land handed to HRH Prince Paribatra Sukhumbhand was surrounded by brothels. When Charoen Krung Road was completed, Chinese migrants moved to the area and built many sacred Chinese shrines before turning this area into Thailand's largest wholesale market for joss paper and ritual-related goods.

Now, this site is in hands of the Chumbhot-Pantip Foundation. Local residents are concerned about land development after the MRT line expanded to their area. In 2011, the Charoen Chai Conservation and Rehabilitation group set up this small two-storey museum and came up with the annual Charoen Chai Moon Festival to raise awareness of the worth of Chinese-Thai cultural heritage among new generations and foreign visitors. 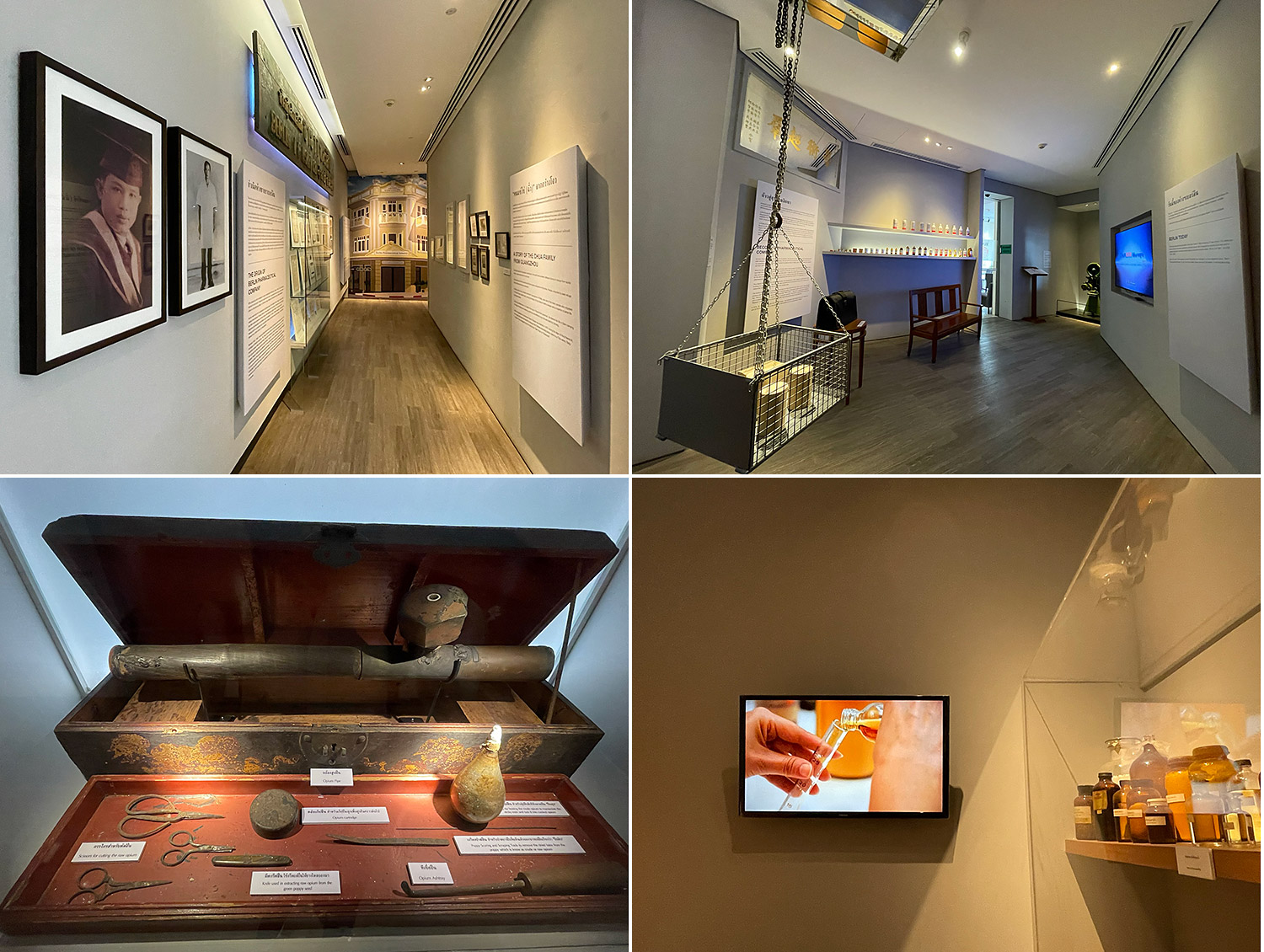 The Berlin Dispensary has been turned into the Berlin Pharmaceutical Museum to educate people about the development of Western medicine in Thailand.

"Everyone is from the third to fifth generation of their family. In the past, our forefathers erected five Chinese shrines around the neighbourhood to pay homage to deities and that was the start of our joss paper market. Before the advent of digital cameras, this area used to be home to a lot of film stores," said Phumsith Purithongrat, a member of the Charoen Chai Conservation and Rehabilitation group.

"Since the Chumbhot-Pantip Foundation terminated the lease contracts and a leasing period is now given on a year-to-year basis, there has been some uncertainty. We acknowledge that people's lifestyles have changed, yet we still want to protect our homes and businesses for future generations. Creating a community museum is a group endeavour to tell the stories of the area's rich heritage."

Walking past a registration desk and up to the 2nd floor, a corner of legendary fortune teller Pung Teng Lung Xian is designed to resemble a reception, with a board depicting good physiognomy. The wall is covered with a giant map of iconic tourist sites, popular food shops and bakeries as well as other shopping options for pilgrims.

The ceiling is adorned with an eye-catching thread of red handcrafted lanterns in various designs, while a vibrant altar table holds a full set of joss paper to celebrate Chinese paper cutting arts. Here, it was formerly the home of a Chinese opera troupe; guests can tour an imitation dressing room and admire a collection of Chinese opera costumes and props. 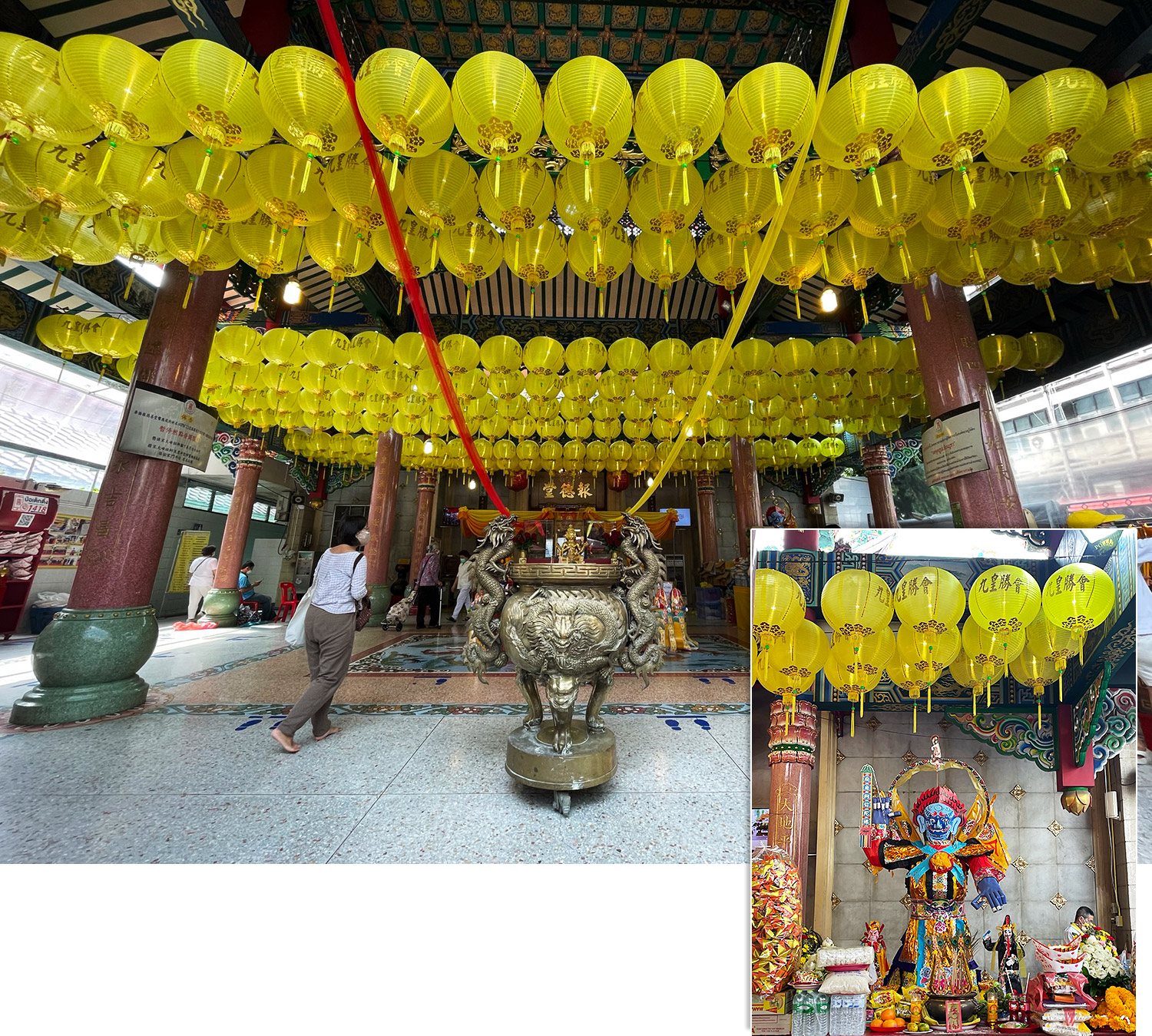 The Tai Hong Kong shrine is a popular place to ask for good health, protection and wealth.

"In recent years, many Chinese temples have encouraged people to minimise the burning of joss paper and incense due to the PM2.5 dust pollution. However, this situation has impacted our businesses. In December, Yaowarat is usually packed with both local and foreign shoppers in December as they are gearing up for the upcoming Chinese New Year celebration," Phumsith said.

Located 200m from the museum, the Tai Hong Kong shrine on Phlab Phla Chai Road was constructed in 1909 by Chinese merchants to pay homage to Tai Hong, a monk who lived more than 900 years ago in Guangdong, China.

He repaired a temple and raised funds for the impoverished and catastrophe victims in various locations, as well as assisting in the burial of the deceased with no family. His benevolence led his disciples to start various charitable organizations, such as Thailand's Poh Teck Tung Foundation. People flock to the shrine to pray for good health, protection and wealth thanks to the sacred Tai Hong Kong statue brought from China.

Wat Khanika Phon is right next door. Yai Faeng, who operated a brothel in Trok Tao, gathered cash from the girls in her house to establish this temple in 1833 before it was renamed and underwent a massive renovation during the reign of King Rama V. Its name relates to the prostitute's earnings.

The monastery's historic structures and architectural elements such as the main statue of Luang Poh Thong Kham, a preaching hall, corridor, a miniature stupa, a bell tower and many lacquered gold leaf painted closets have been preserved to showcase Thai artistry. 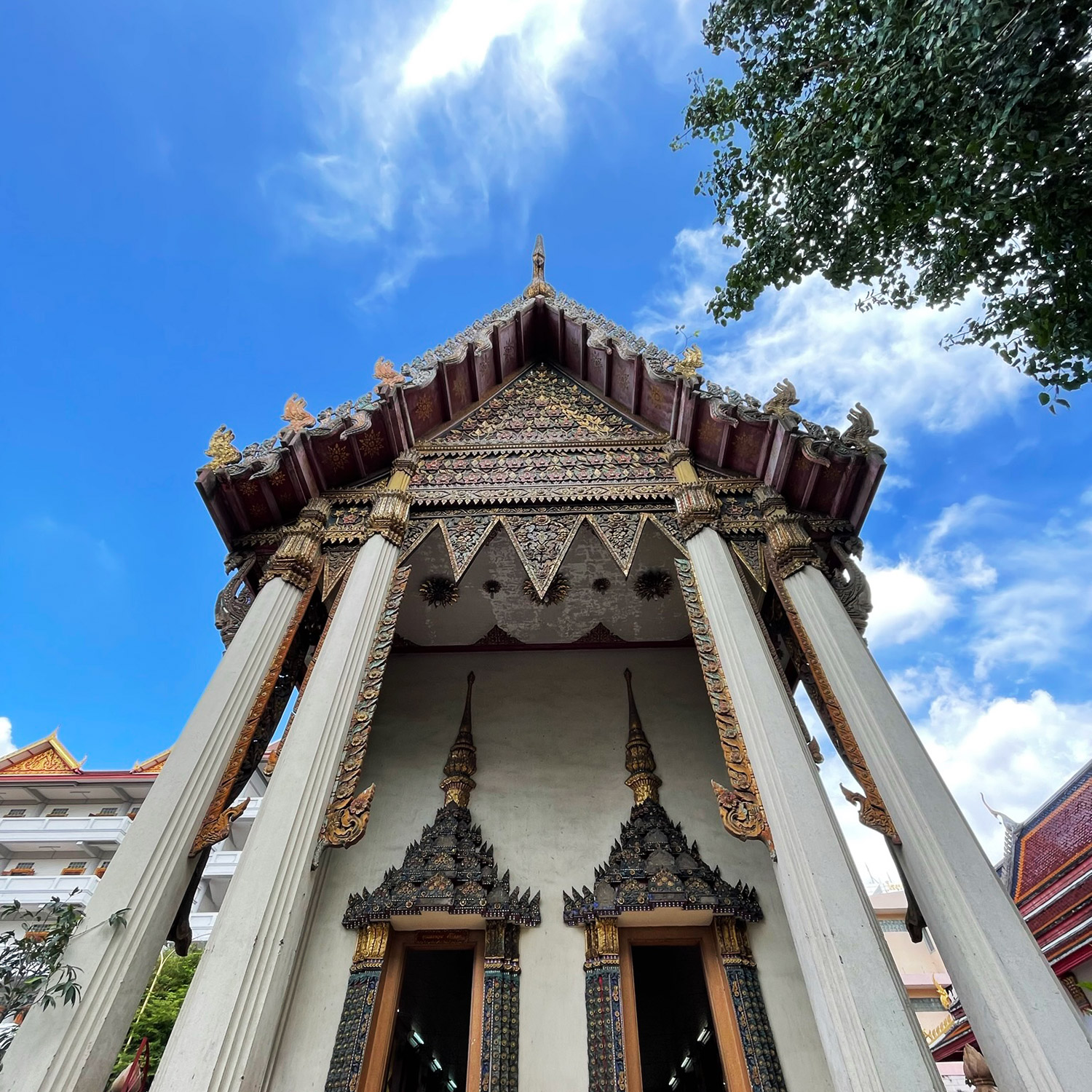 Wat Khanika Phon was built during the reign of King Rama III. 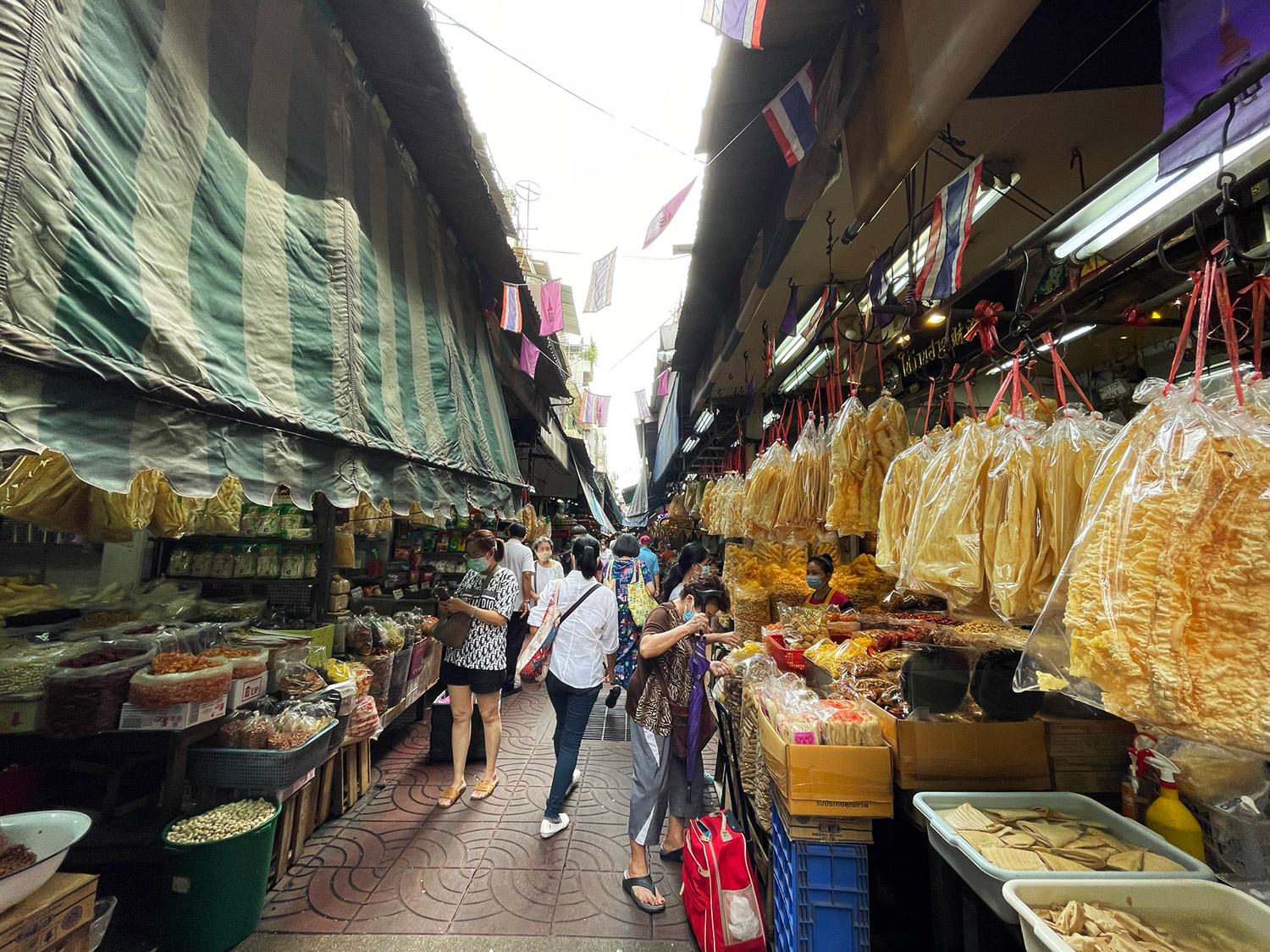 Standing opposite the Charoen Chai community, the Yaowarat Old Market on Soi 6 is the most popular shopping destination, with visitors able to dive into a sea of cooking ingredients ranging from dried food and fresh seafood and Chinese herbs.

If you're looking for something for a light meal, there's a variety of street food such as freshly steamed dim sum, noodles with homemade fish balls, hoy jor (deep-fried crabmeat and shrimp dumplings), pickled cabbages in sesame oil and egg noodles with shrimp dumplings on offer.

Sitting in the heart of the market, the Leng Buai Eia shrine is a peaceful place to take a break and pray for wealth and good health. It was erected in 1843 and underwent multiple restorations before the Teo Chew Association of Thailand spent 10 million baht renovating it as a tribute to the dragon god.

A pair of two dragon pillars serves as a guardian at the gate and the roof is graced with two dragons capturing a crystal ball. Inside, the shrine houses statues of Leng Buai Eia, Guan Yu (the God of War), and Tain Hou (Queen of Heaven).

It's about 600m from the MRT station to the Taixia Hukzhou shrine, which stands on Rama IV Road. Built during the reign of King Rama II, its colourful walls depict scenes from the classic Chinese novel Journey To The West, while a 200-year-old statue of Sun Wukong, the Monkey King, sits on a lotus from China, and draws crowds of local residents who pray for luck, protection, prosperity and career success throughout the year. 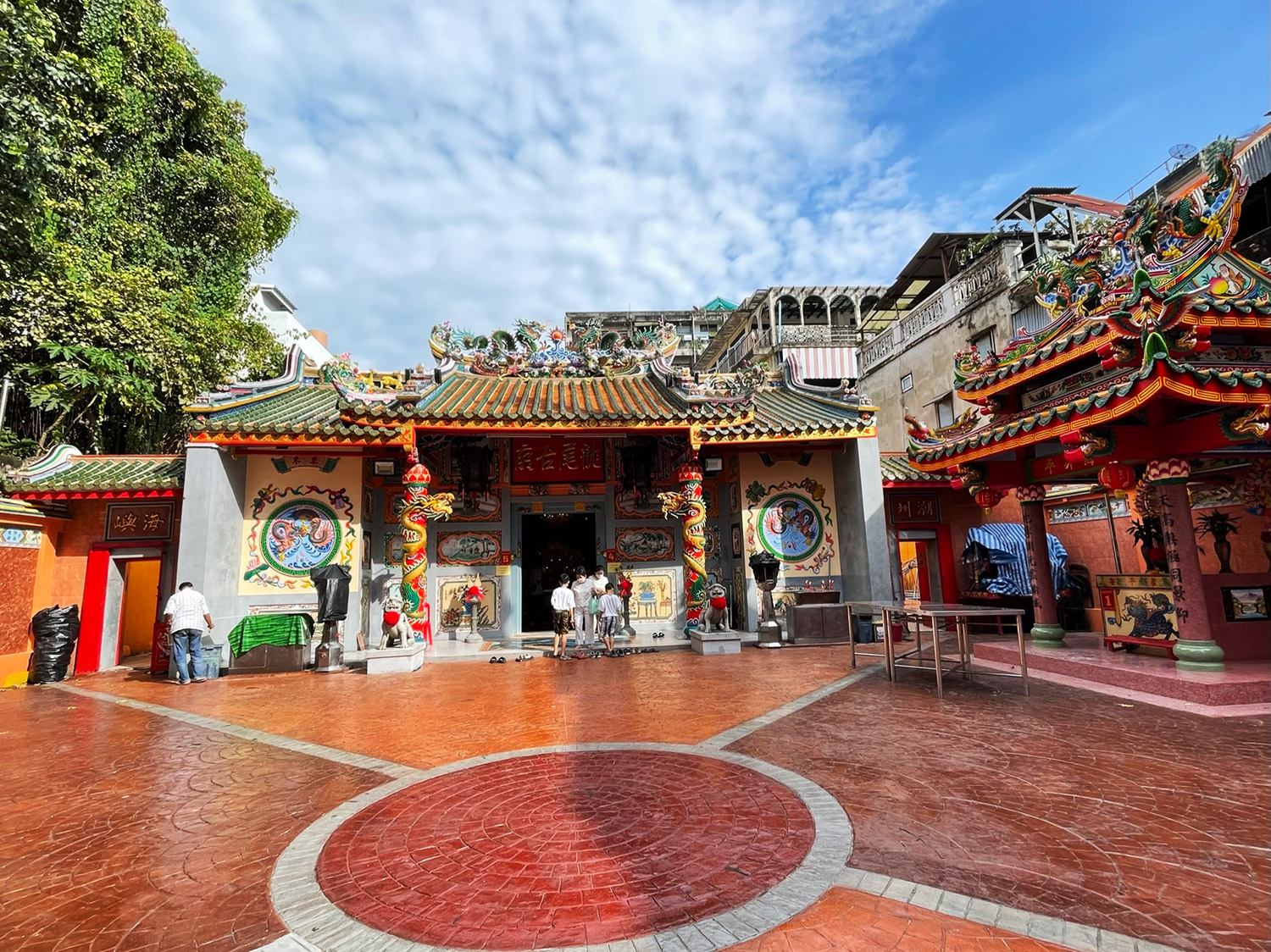 The Leng Buai Eia shrine is dedicated to the dragon deity. 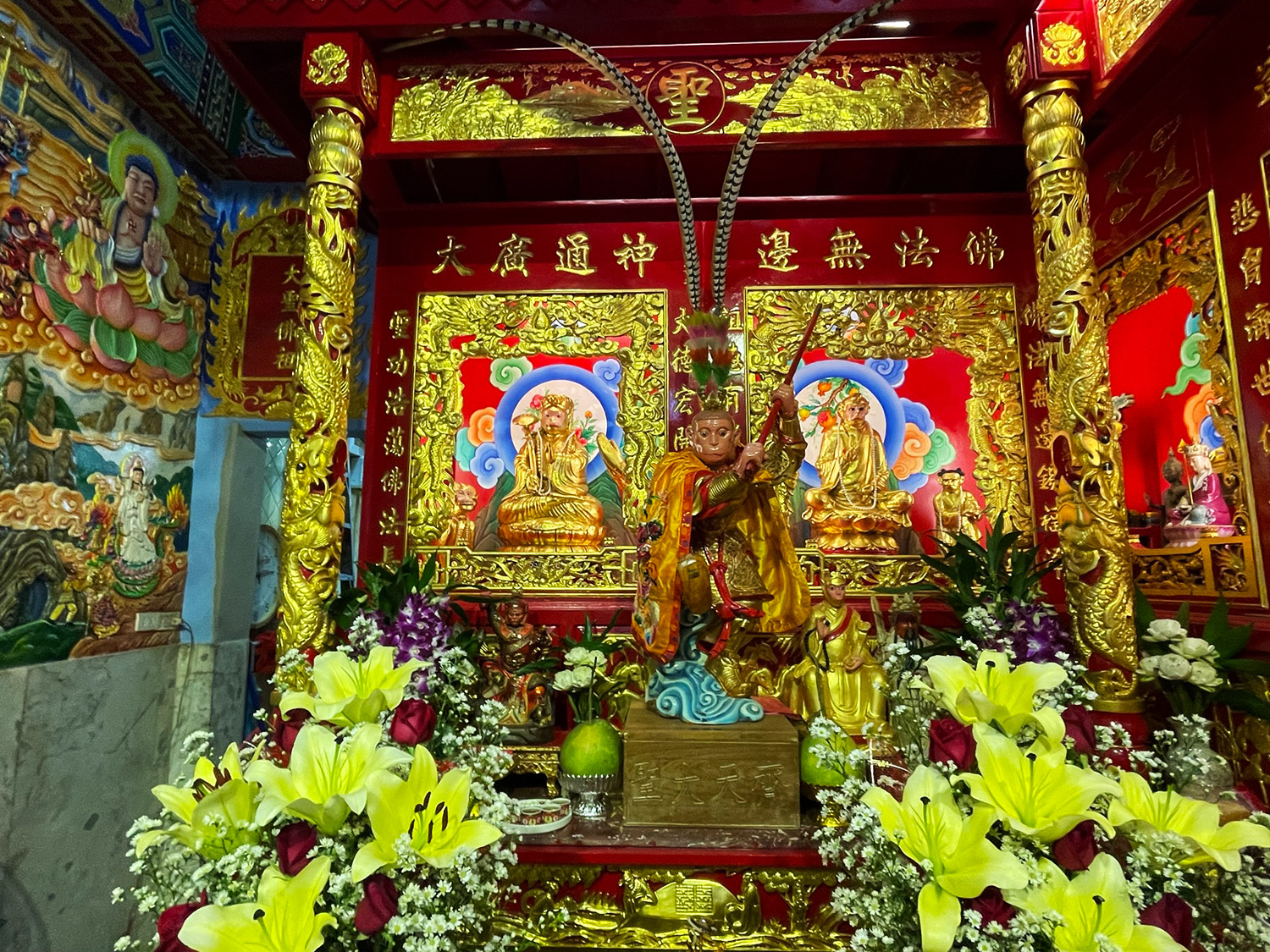 The Taixia Hukzhou shrine is home to a 200-year-old statue of Sun Wukong, the Monkey King. 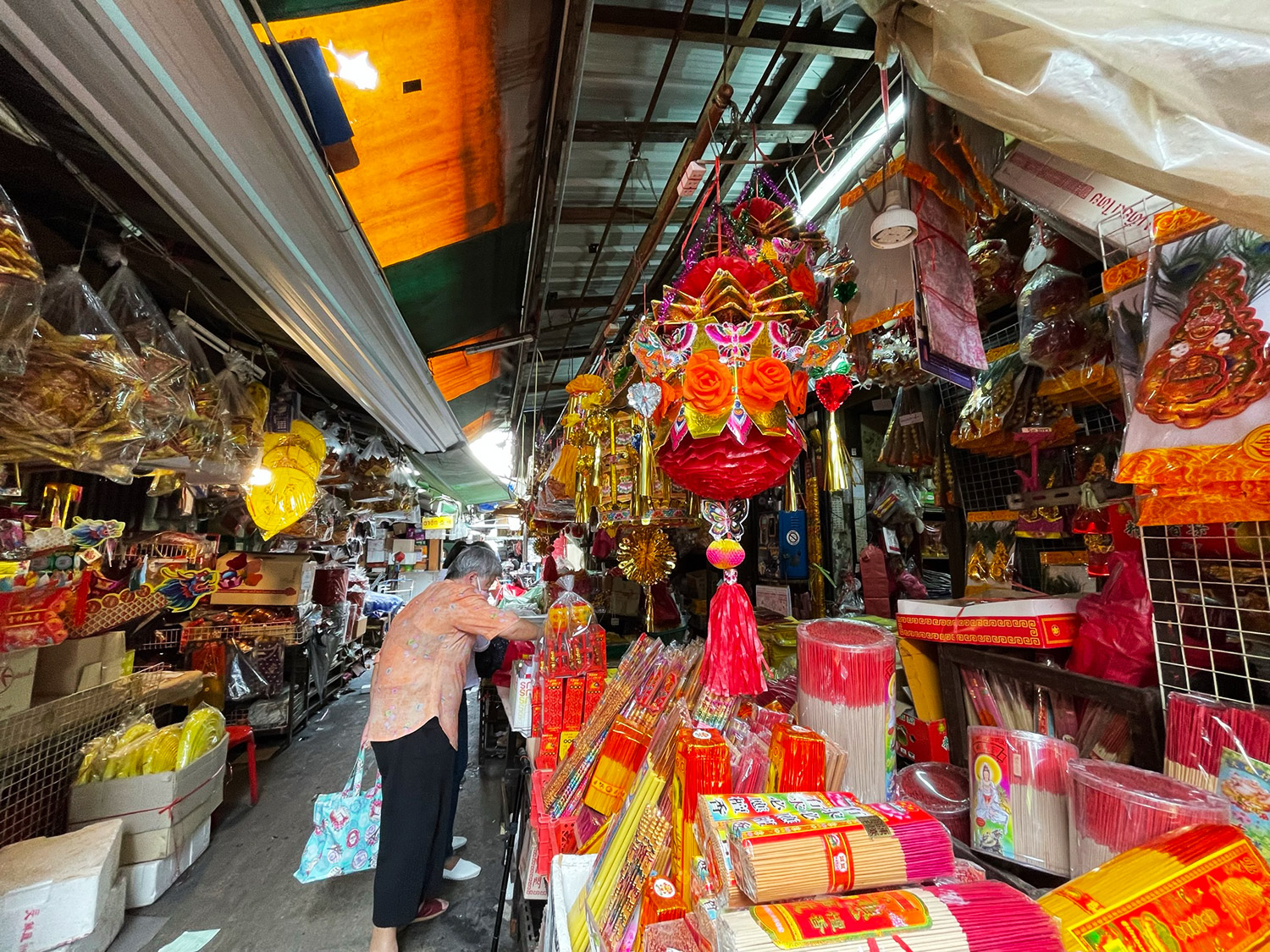 Just 250m away from the old market, a tour comes to the end at the Berlin Pharmaceutical Museum, where visitors can learn about the Chinese diaspora, the history of Charoen Krung Road, the rise of Western medicine and drug-making industry in Thailand.

During the reign of King Rama VII, Dr Chai Chainuvati used this classic yellow building as the Berlin Dispensary, one of the first private clinics delivering Western treatment in the Chinatown neighbourhood. His son transformed it into a museum in 2017.

The exhibition can be divided into three zones. Sumitra Chakhriyanuyok provides tours in Thai, Chinese, English and Japanese. A narrow walkway is designed to resemble a time capsule that takes visitors back to the reign of King Narai when a group of missionaries brought Western medicine to the Ayutthaya kingdom.

To narrate Chinese immigration, some old documents and Chinese-style daily utensils from the Chainuvati family's private collection are displayed on the walls, including a wooden basket, an oil lamp with ancient candle holders, a Chinese-style ceramic pillow for opium smoking, and an opium chest packed with a pipe, cartridge, knife, ashtray and other tools.

The next room simulates Dr Chai's office and showcases a reproduction of his examination table, handwritten patient records, old prescriptions and a variety of medical supplies. In 1954, Dr Chai launched his own drug-making firm, using the 2nd and 3rd floors for manufacturing and the 4th floor for storage.

Berlin balm, the cough syrup Houstonin, a purple liquid medicine to enhance appetite, and Begesic cream for muscle and joint pain relief were among the earliest pharmaceuticals created here. Also on view is a replica of the hoist used to carry ingredients from the 1st floor to the processing unit upstairs.