Alzheimer starts in the gut

We have all heard of gut health and understand that it impacts our overall health in some way. But did you know that poor gut health has been linked to mood disorders and brain diseases like dementia?

Do you know what the gut or microbiome is? As a reminder, it's simply all the bacteria and microorganisms found in the gastrointestinal (GI) tract. And it has a huge impact on our health.

There are trillions of bacteria in the human gut, and they live in a symbiotic way to help us stay healthy. The average person will have about 30 trillion cells in their body. They will have around the same number of gut bacteria, give or take a few trillion. The point is that we are made up of bacteria, at least 43%. So, we are only half-human. We have our own human genome, and common wisdom is that our human genes determine and impact our health. In reality, the bacteria that reside within us also have a genome, and it is the interaction between the human genome and the bacterial genome that makes us human and healthy.

To illustrate just how impactful our gut bacteria can be on our health, Prof Rob Knight from the University of California San Diego took the bacteria from obese and lean people and transplanted them into the sanitised gut of lab rats and observed the outcome. What happened was that the rats with the gut bacteria from the obese human got fat. And the rats with the lean human bacteria remained lean. Another example is how Helicobacter pylori (H. pylori) bacteria break through the gut defences against stomach acid, resulting in stomach ulcers.

Our gut bacteria have a pivotal role to play in our health. They manufacture vital chemical compounds, protect against diseases, regulate the immune system, and help with digestion. Over the last two decades, scientists have observed the link between gut health and various immune and metabolic functions, autoimmune disorders, and brain and mood disorders. For example, we know that a gut diverse in microbiota promotes health and prevents chronic diseases, whereas poor diversity is a characteristic of obesity, diabetes, asthma, and gut inflammation. Recently, science has begun to figure out that gut health is linked to diseases like multiple sclerosis, inflammatory bowel disease, colon cancer, dementia, Alzheimer's, anxiety, and depression. Research in these areas continues.

THE SECOND BRAIN AND THAT GUT FEELING

The gut has been called the second brain, and for good reason. The enteric nervous system is found in our gut and relies upon the same neurons and neurotransmitters as our central nervous system. A lot of cross-talk goes on between our brain and our gut using this nervous system, but our immune system and hormones also participate in this communication. Due to this communication, the "brain in our gut" plays a key role not only in physical diseases but also in our mental health.

If you have ever felt "butterflies in your stomach", you have experienced this brain-gut connection. It really brings new meaning to having ever had a "gut feeling" about something.

BUT HOW CAN GUT HEALTH IMPACT BRAIN FUNCTION?

The brain and mental health is a massively complex field, so don't think that gut health is the only cause of diseases impacting these areas. However, as microbiome research progresses, we find that people experiencing anxiety and depression might be helped through dietary changes (using probiotic and non-probiotic foods and supplements) that support the growth and proliferation of the correct type of bacteria. Such steps help to sustain the microorganisms in the gut. These microorganisms help to regulate brain function via the gut-brain axis, impacting functions in the immune system and metabolism by providing essential inflammatory mediators, nutrients, and vitamins. Additionally, poor gut health can contribute to anxiety and other mood disorders because of the gut-brain link. Mental stress can also impact the health of gut bacteria, which also feeds back into the health of the brain-gut axis. 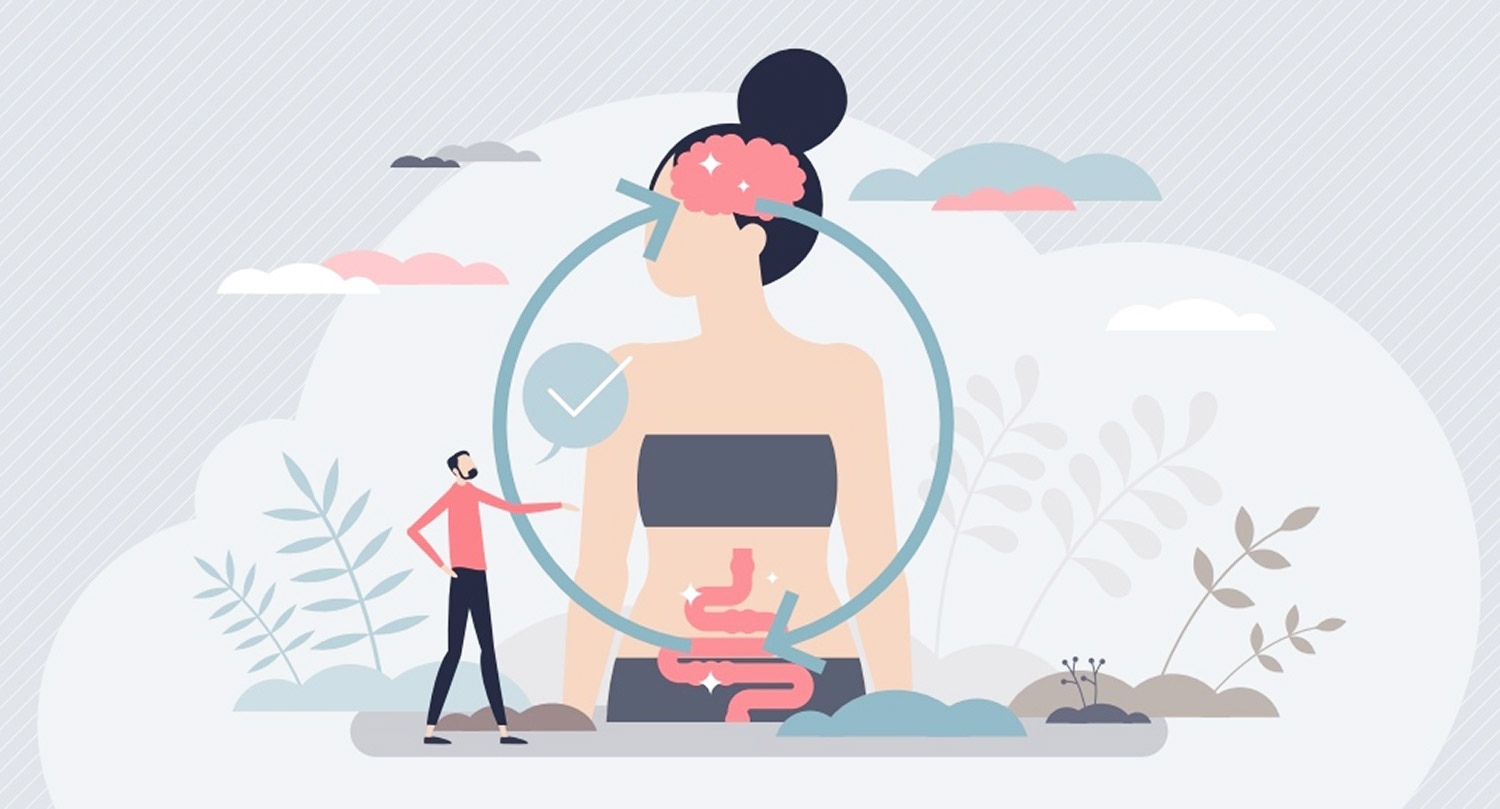 In another surprising finding, researchers have confirmed a link between depression and stomach ulcers. So we know there is a link between gut (H. pylori) bacteria and ulcers, as previously stated, and now also a link between stomach ulcers and depression. Such research absolutely supports the holistic approach to caring for patients with gastrointestinal diseases. Additionally, new research by UQ's Institute for Molecular Bioscience (IMB) and Queensland Brain Institute supports the idea of a feedback loop where gut health impacts brain and mood health and where those undergoing psychotherapy or psychiatric treatment have been observed to exhibit positively-impacted gut symptoms. This could indicate that the mood state can influence gut health as well as gut affecting mood.

THE LINK BETWEEN THE GUT, THE BRAIN, AND DEMENTIA

Alzheimer's is the most common form of dementia, and the scientific community has long suspected that gut microbiota play a role in developing this disease. Researchers have now shown that the gut bacteria composition in Alzheimer's patients is altered and has reduced microbial diversity. There is also a real correlation between an imbalance in the gut microbiota and the development of amyloid plaque in the brain. Scientists now believe that gut bacteria can influence cerebral functioning, promote neurodegeneration, and modify the immune system's interaction with the nervous system. This is very promising for research into innovative neuroprotective strategies in brain disease treatment.

THE GUT AND SLEEP

We all know that not getting enough sleep is detrimental to your health, with many and varied health problems resulting (cardiovascular disease, cancer, Parkinson's disease, autoimmune diseases, and psychological issues such as chronic stress, anxiety, and depression). But did you know that poor sleep can negatively affect your gut microbiome? Researchers have found that those who slept well had a better diversity of gut bacteria, and we know that the more diverse someone's gut bacteria is, the better their overall health. So this finding might indicate that gut microbiome-focused treatment protocols may help reduce the risk or severity of brain diseases and promote a good night's sleep.

THE GUT AND ANTI-BIOTICS

One of the most significant things that kills off our internal gut flora is the modern miracle of antibiotics. Ironically, we take them due to illness, only to kill off our good bacteria, which then causes other health problems. Antibiotics can upset your microbiome for more than six months if the good bacteria isn't replaced after taking them. This can cause health effects that may go unnoticed and untreated for a long time until the cause is no longer evident. So, if you're taking antibiotics, make sure you talk to your doctor about it and understand why. They aren't bad; they serve a purpose, but taking antibiotics needs to be followed up with good probiotic replacement therapy if you want to avoid getting gut health-related issues later on.

WHAT IMPACTS GUT HEALTH, AND WHAT TO DO ABOUT IT?

Besides anti-biotics, eating the wrong foods can also cause gut problems. Food allergies and intolerances, genetics, poor lifestyle choices, chronic stress, and lack of sleep all impact the gut, the brain, and your overall health.

HOW DO YOU KNOW IF YOU HAVE A GUT HEALTH PROBLEM?

The best way to find out is to have a microbiome test performed by a gut health expert. However, the following symptoms may indicate that you have a gut health issue:

Naturally, if you notice any of these chronic symptoms, you should seek immediately medical attention to ensure you do not have a serious condition. Your gut health has a significant impact on your overall health. As a result, keeping your gut healthy is definitely a priority.

Authors: Miskawaan Health Group (MHG). For further information please visit us online at Miskawaan.com or contact us via: contact@miskawaanhealth.com or call (0)2086 8888.