There's hardly been a time when I could say with all of my heart that a meal was "beyond criticism". 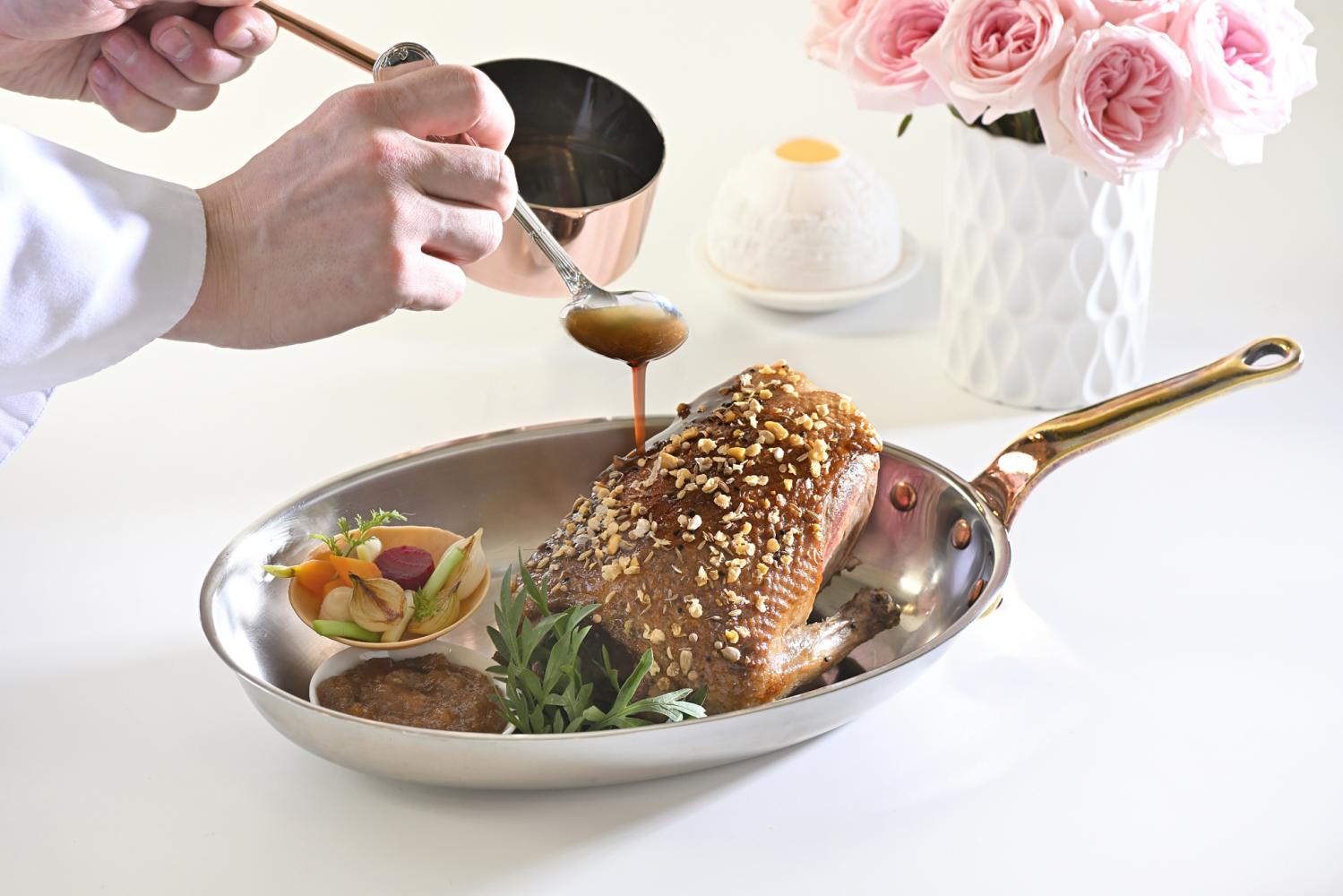 But a couple nights ago during my dinner at Le Normandie by Alain Roux, the question of "who am I to criticise this superb food?" kept popping up in this food writer's mind.

Yes, the meal was above reproach, as a matter of fact.

It was, after all, an experience offered by the chef-patron of a globally acclaimed restaurant that has continuously been awarded three Michelin stars for more than 38 years. Very few restaurants in the world have achieved such a distinctive glory.

And for Bangkok to have a profound affiliation with such culinary extraordinaire not only is great news for gourmands but also a momentous milestone for our dining scene.

Launched on Wednesday, Le Normandie by Alain Roux is a partnership between the Mandarin Oriental, Bangkok's 63-year-old French restaurant and England's three-Michelin-starred Waterside Inn restaurant in the Bray village of Berkshire. 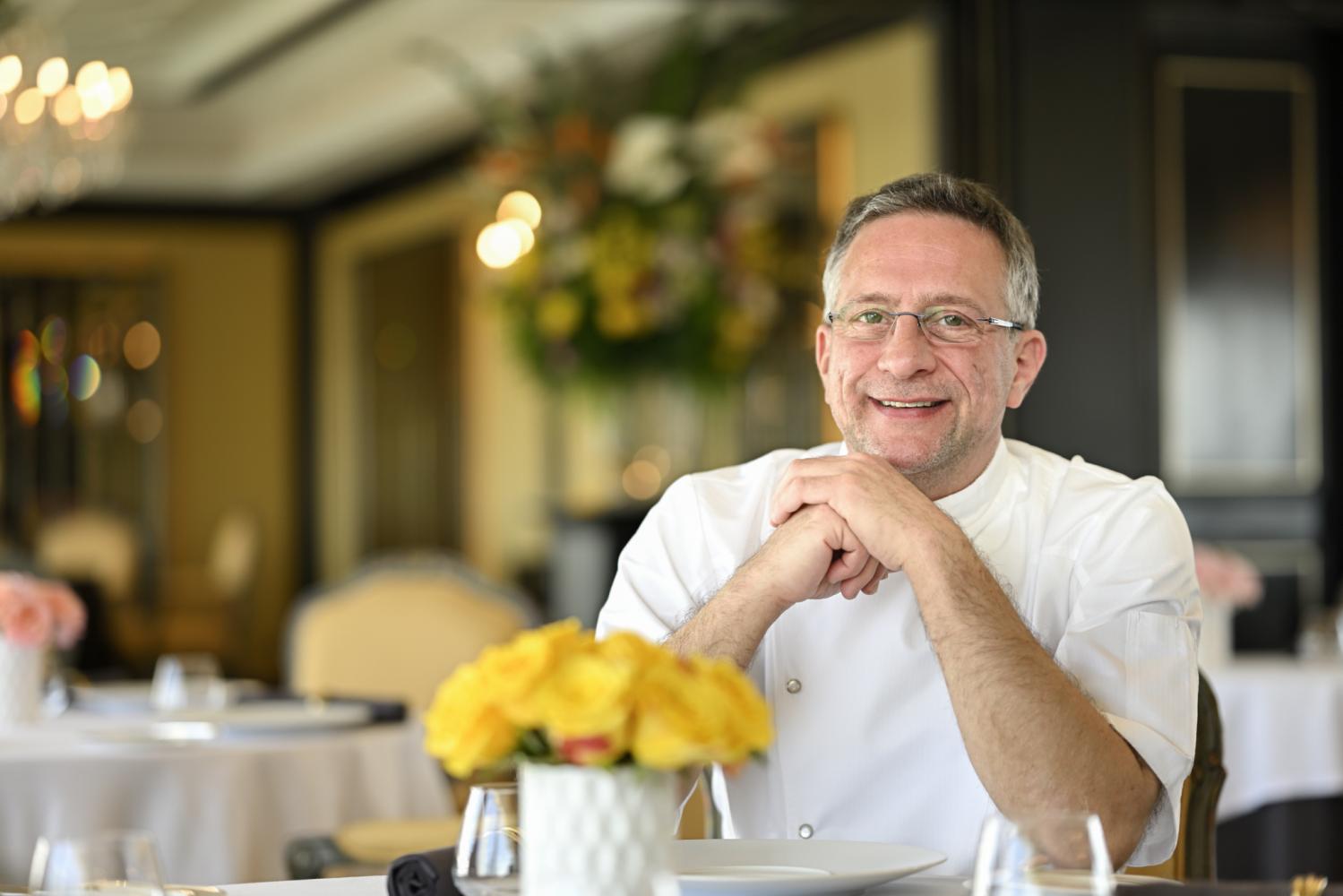 Located on the banks of the River Thames, the Waterside Inn was founded in 1972 by French-born chef brothers, Albert and Michel Roux. The family business was handed over to Michel's son, Alain, in 2010.

This collaboration between the two legendary establishments on the Thames and the Chao Phraya River was a dream the late Michel and his son Alain shared.

"We had discussed the project for 20 years. It's something my father and I would have loved to do together," Alain said.

In fact, the Roux family is no stranger to Le Normandie. Michel Roux OBE, who passed away in March last year, had presided over Le Normandie's kitchen many times as guest chef since 1985.

"Le Normandie by Alain Roux is a new addition to our family. I'm enjoying every minute of it and am sure my father is watching," he said. 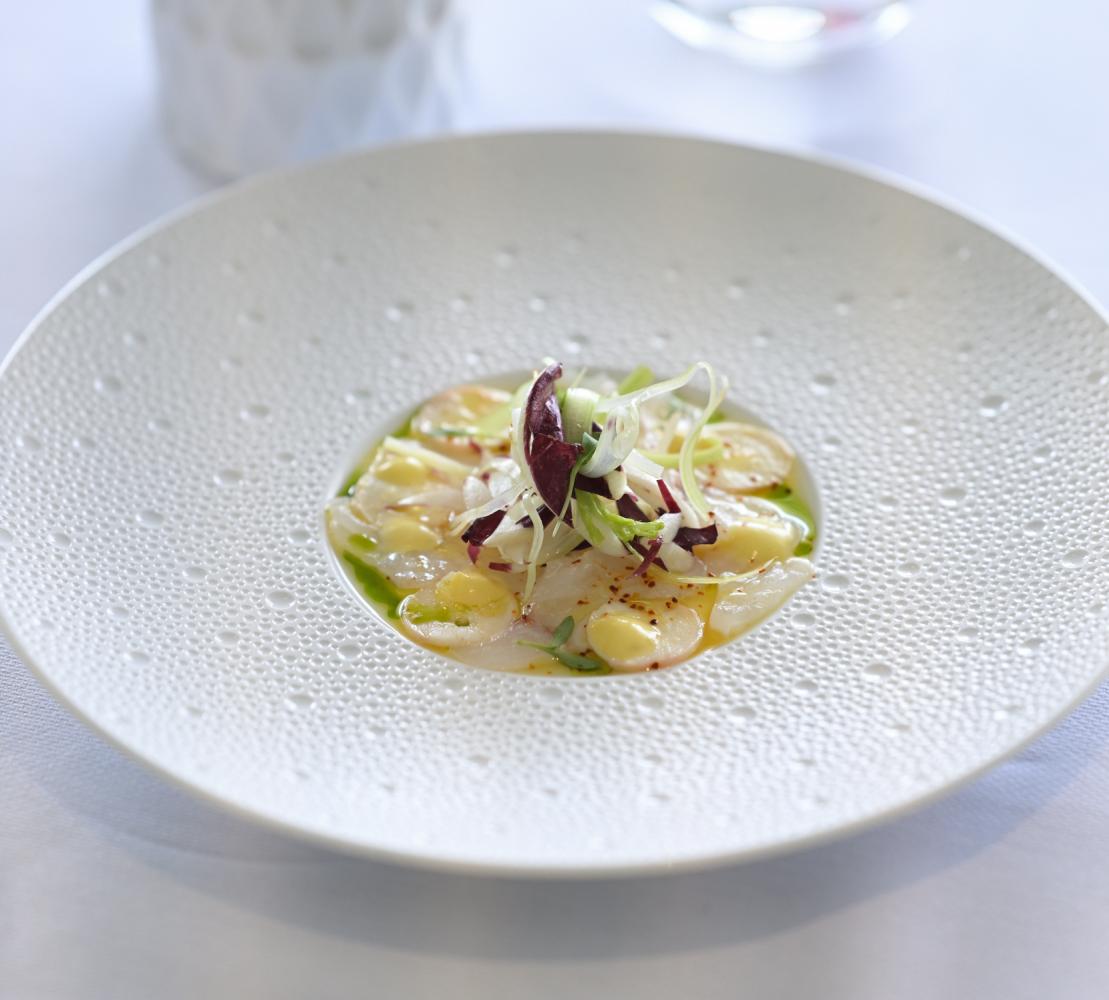 The ceviche of sea bass and octopus in passion fruit juice with crisp vegetable salad.

Just like his restaurant in Bray, the cuisine showcased in Bangkok is rooted in classic French cooking yet lighter in consistency and more refreshing in taste. Dishes, which are very comforting with a delicate and somewhat adventurous touch, are prepared with respect to the ingredients, their producers and their origins.

Phil Hickman, a native of Wales, was appointed as the restaurant's head chef. A product of Roux mentorship, Hickman is armed with more than 20 years of culinary experience, half of which has been spent working alongside Alain at The Waterside Inn. Hickman's career profile also includes years at Noma, the world's best restaurant in Copenhagen.

Meals at Le Normandie by Alain Roux are presented through a series of degustation menus that change every three months upon seasons.

A six-course "Le Menu Exceptionel", which I had, was structured to showcase some of the Waterside Inn's all-time treasured dishes that celebrate also the season's best ingredients. 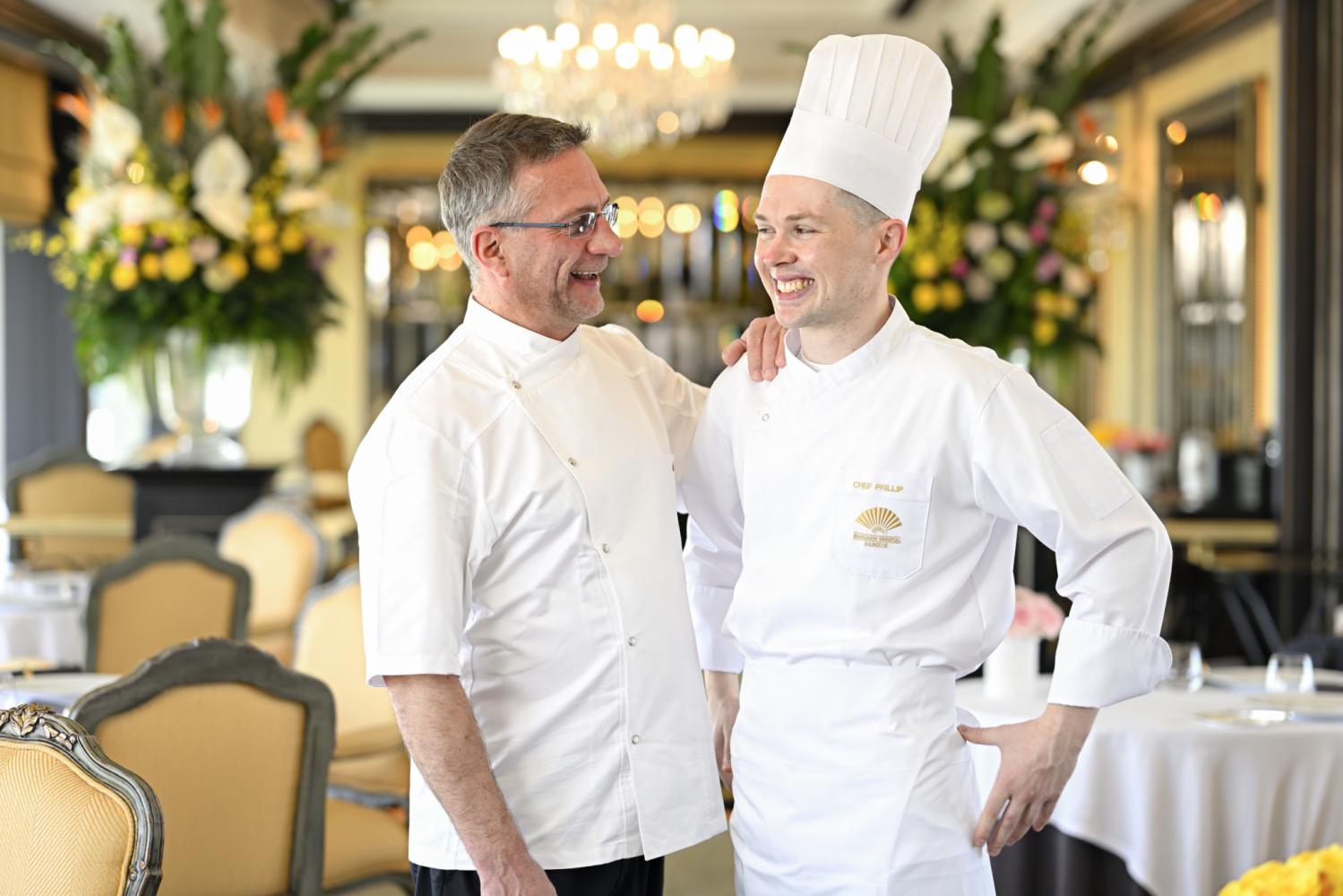 Dinner began with complimentary amuse bouches: a smoked eel custard on dill scone, a mascarpone-tarragon tart and a French oyster with cucumber pearls. Each provided a delicious glimpse into the chef's masterly approach to cooking.

The official first course was represented by a neat rendition of sea bass and octopus ceviche in passion fruit juice with crisp vegetable salad.

This was the second time I've had the dish prepared by Roux. The first was in Jan 2020 during a special food promotion he, as guest chef, hosted here at Le Normandie.

The ceviche proved as much enchanting to the taste buds as it did two years ago.

But this time it looked more visually aesthetic, almost like a watercolour painting that breathed through delicate slices of Brittany seafood, sang through crunchy strips of celery, fennel and radicchio and beamed through dollops of ambrosial passion fruit cream. 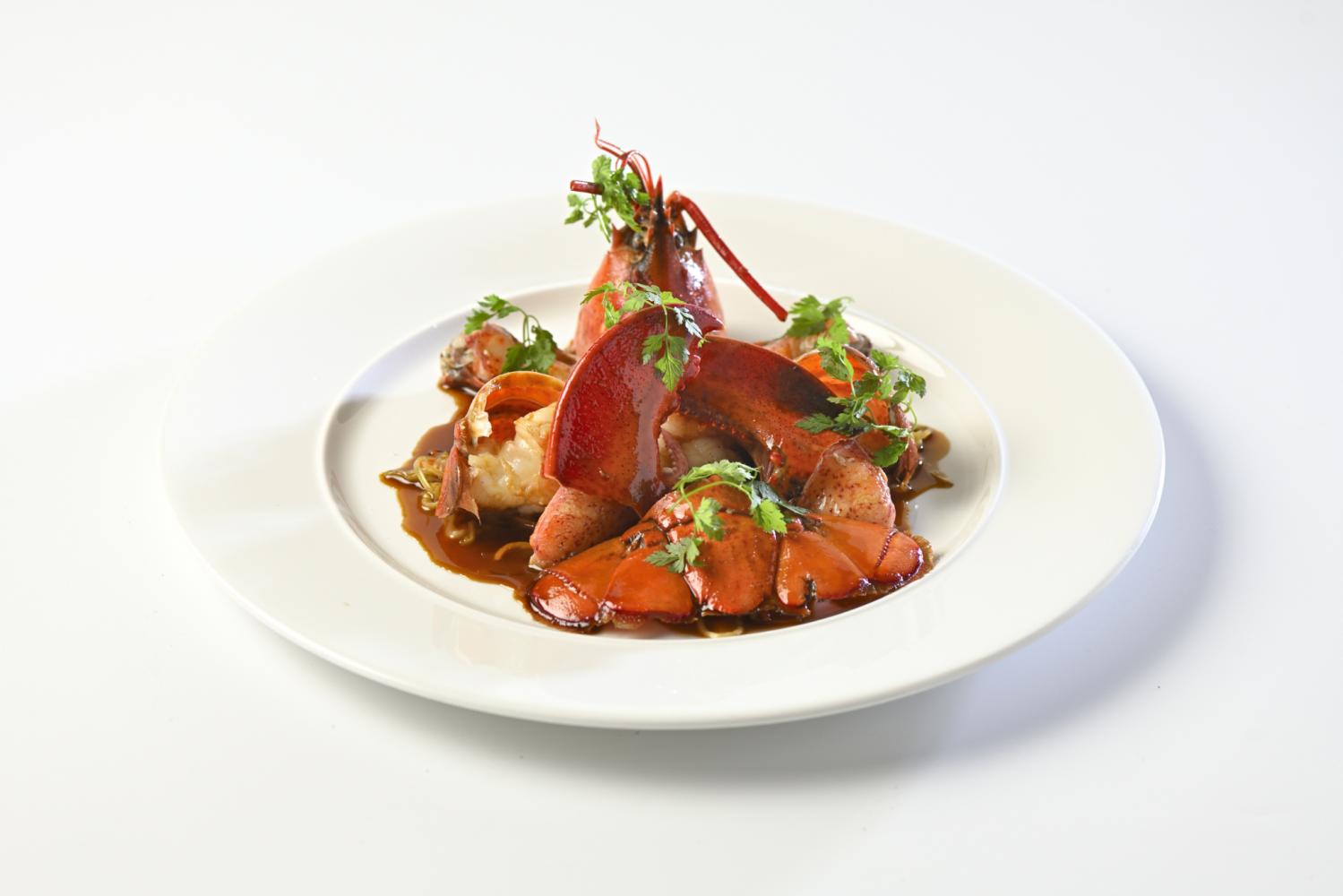 Aficionados of pan-fried foie gras know we can bank on the fatty liver for gastronomic contentment.

But a good rendering of the dish done by a true master will always raise us to culinary cloud nine and perhaps beyond the universe.

Certainly, it's the case here.

Roux's pan-fried foie gras with Gewurztraminer sauce was a very distinctive yet comforting unification of a thick firm chunk of perfectly-cooked duck liver, delicious white wine grape sauce and an array of ingeniously synchronised garnishes. They included a spicy fruity puree of capers and raisins; juicy sultana grapes soaked in jasmine tea until voluptuous and aromatic; and a crusty finish of deep-fried capers and toasted cauliflower.

The evening's seafood and main courses were represented by two iconic dishes of the Waterside Inn: the poached halibut and the roasted Challandais duck.

The radiant fillet of cottony white halibut, cut into a neat rectangular portion, came topped with a frothy and fragrant emulsion of lime and vodka on a bed of fine shreds of blanched Chinese cabbage.

It was difficult to pick a favourite dish because they were all superlative.

My lingering praise on the halibut to my dining companion was interrupted with the tableside presence of a food trolley. 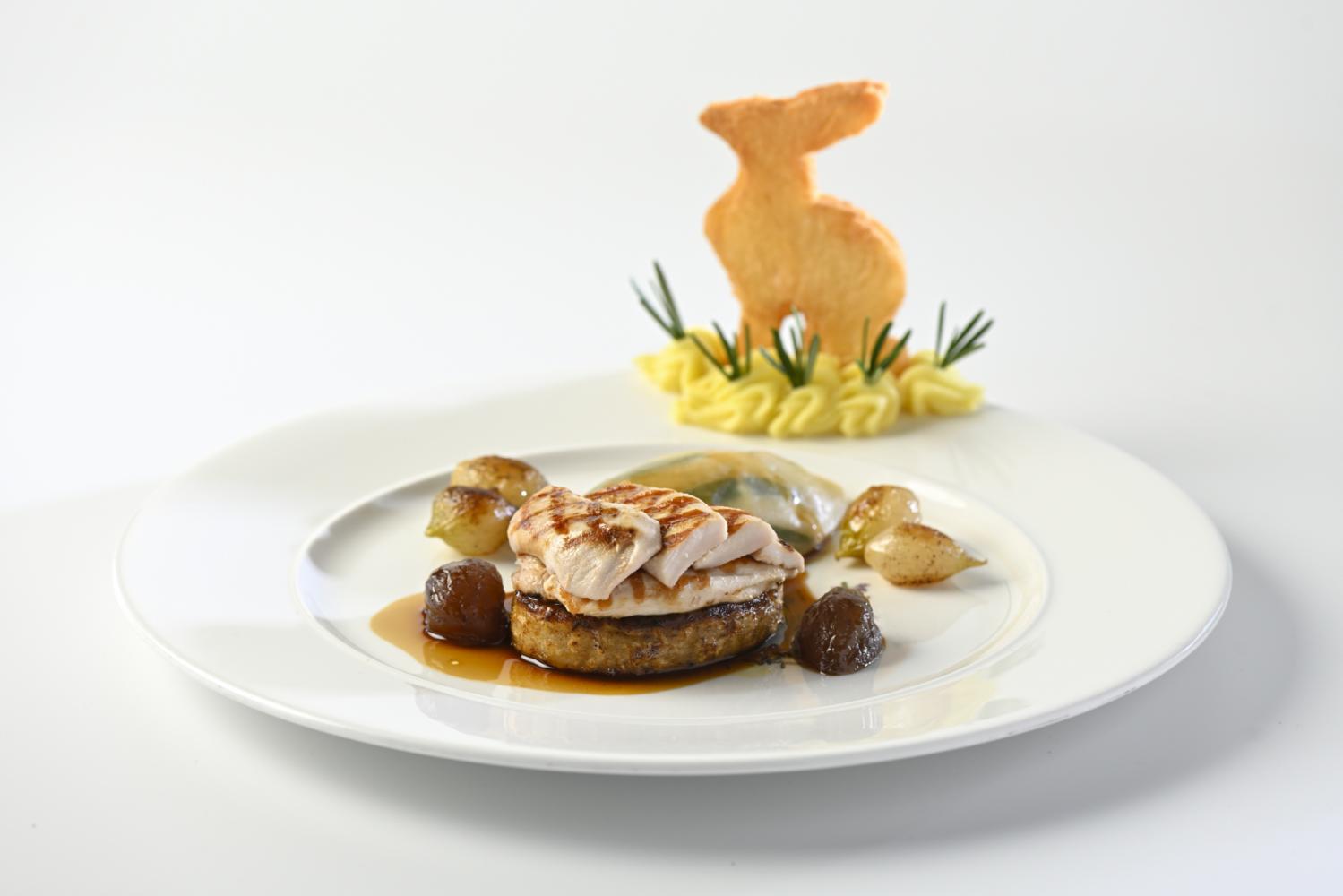 It's now the Challandais duck's turn to entice.

The dish has been greatly treasured for being cooked slowly and meticulously to take out the fat while retaining its flavourful quality and supple texture, and for a skilful style of serving.

The golden-skin, dukkah spice-rubbed bird is carved at the side of the guests' table with awe-inspiring swift upward strokes that requires a super sharp knife.

The neat, thin and tender slices of duck meat were then dressed with its rich jus from deglazed pan and accompanied by a briny vegetable tartlet, a sweet thick plum chutney and a drizzle of toasted crushed chickpea, cardamom, lentil and fennel seeds.

Of a truly-glorious dining establishment, even a palate-cleanser and mignardises will live up to the chef's reputation.

With the fact that Roux is also a Master Pâtisseier in the International Association Relais Desserts, which ranks him one of the top 100 best pastry chefs in the world, diners at his restaurants are always guaranteed with an impeccable sweet finale.

The pre-dessert course of lychee sorbet with cardamom and blackberries exhibited, in its frosty manner, a silken mixture of full-flavoured fruit puree with a complementing whiff of spice. 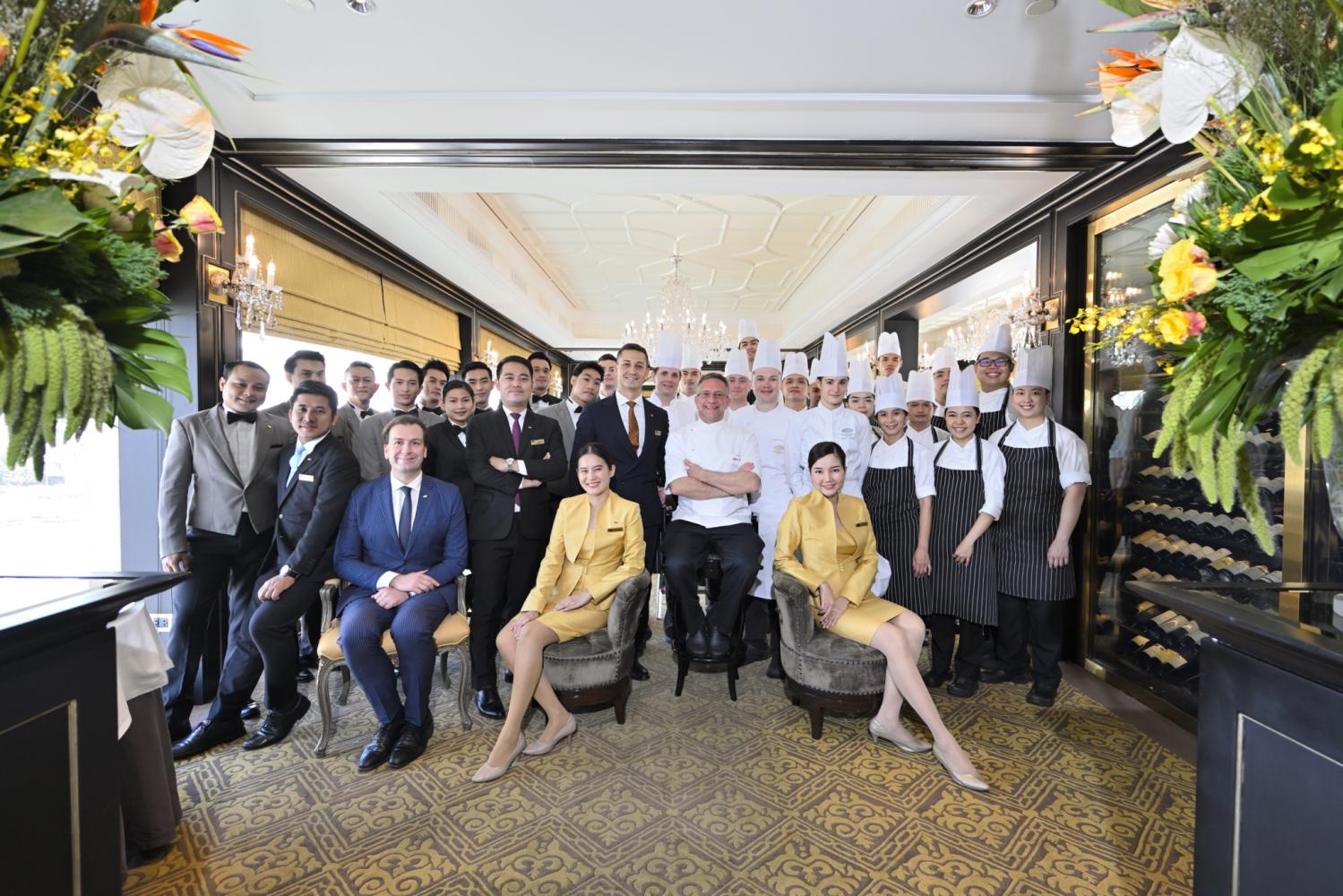 The unparalleled team of Le Normandie by Alain Roux.

Our dinner came to a monumental ending with a warm, airy and perfectly-puffed up golden Lorraine plum souffle. This signature dessert is served here in Bangkok exactly the same as how you would find in Bray.

Other of the Waterside Inn's iconic dishes, such as pan-fried Canadian lobster medallions and ginger flavoured vegetable julienne with white port sauce; and grilled tender rabbit fillets served on a celeriac fondant, glazed chestnuts and Armagnac sauce, are also available from a 16-item a la carte menu.

However, for an ideal dining experience, a tasting menu is always best recommended.

A weekday's three-course tasting lunch costs 2,500 baht, or 3,400 baht with a platter of four French farm cheeses. More extensive lunch is offered on Saturday and Sunday at 7,500 baht for an eight-course, or 8,400 baht inclusive of a cheese course addition.

Guests at Le Normandie by Alain Roux are attended to by Mandarin Oriental Bangkok's team of scrupulous service staff under the guidance of restaurant's manager Federico de Luca who ensures the dining experience is orchestrated with a seamless blend of five-star efficiency and genteel cordiality. Wine pairings are curated by veteran chief sommelier Antoine Simonnet. 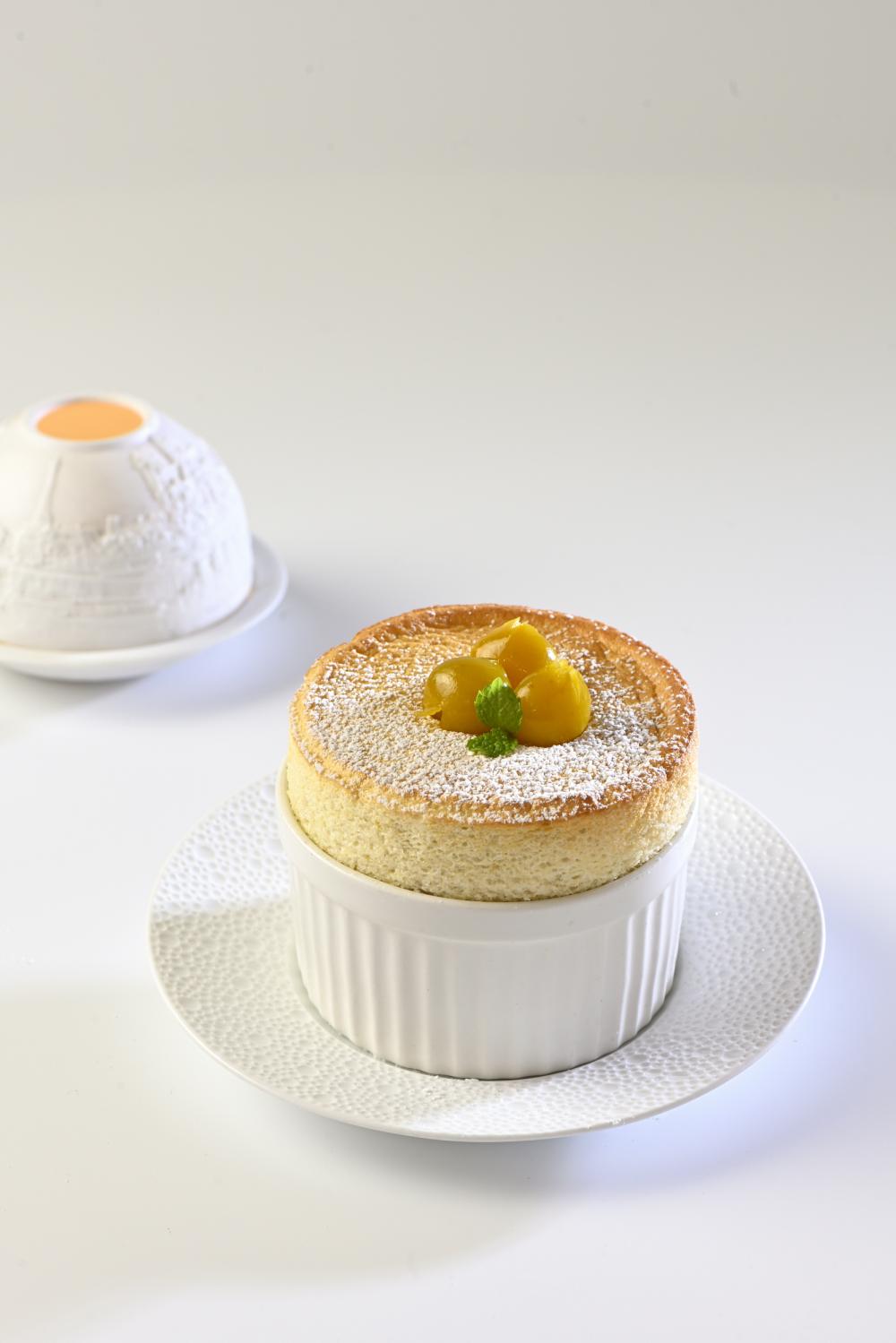