The last supper of the year, on high at Red Sky, is one mouth-watering Michelin-laurelled menu after the other

New Year’s Eve at the breathtakingly elevated restaurant and bar brings on the stars from all directions.

Amid a million twinkling pinpricks, beneath the vaulted heavens, the 8-course “Extravagant New Year’s Eve Gala Dinner” segues a succession of menus behind the Michelin stars of some of the world’s most storied chefs and restaurants.

Indeed, all courses are inspired by Chef Christian’s and Chef Andrea’s past collaboration with some of the finest 3-Michelin Star Chefs ever to throw a kitchen tantrum.

Superlatives barely do justice to the flavours and textures, the views and verve — all very much as has come to be expected of Red Sky which, strange to say, will be swinging into its 15th year holding court at the pinnacle of the undisputed epicentre of the sprawling capital.

There’s no doubt that those who reserve tables in time, whether in the plush panoramic interior or chic cabriolet terrace, will be ensconced in some of the best seats in town, especially now that the all-clear has been sounded for what promises to be a phenomenal fusillade of fireworks.

Soaring 55 floors over the terrestrial cosmos, every mouthful and sip is to be savoured, all the way through to an ample sense of satiation with barely enough tummy space for the dainty mignardises.

The culinary voyage of discovery begins fittingly with the finest caviar: Beluga. But not just any old Beluga caviar dish. This is the iconic caviar in a martini glass recipe created by the late great French chef and restaurateur Joël Robuchon aka “Chef of the Century”. Created while cooking at Café Jamin in Paris shortly before he began the Atelier phenomenon, the recipe was available throughout his international restaurant empire, including Bangkok. The recipe was always the same: a generous 15 grammes of caviar filling the bottom half of the glass topped with lobster jelly and finished with cauliflower cream with sour cream and a dab of curry powder. Perfection! 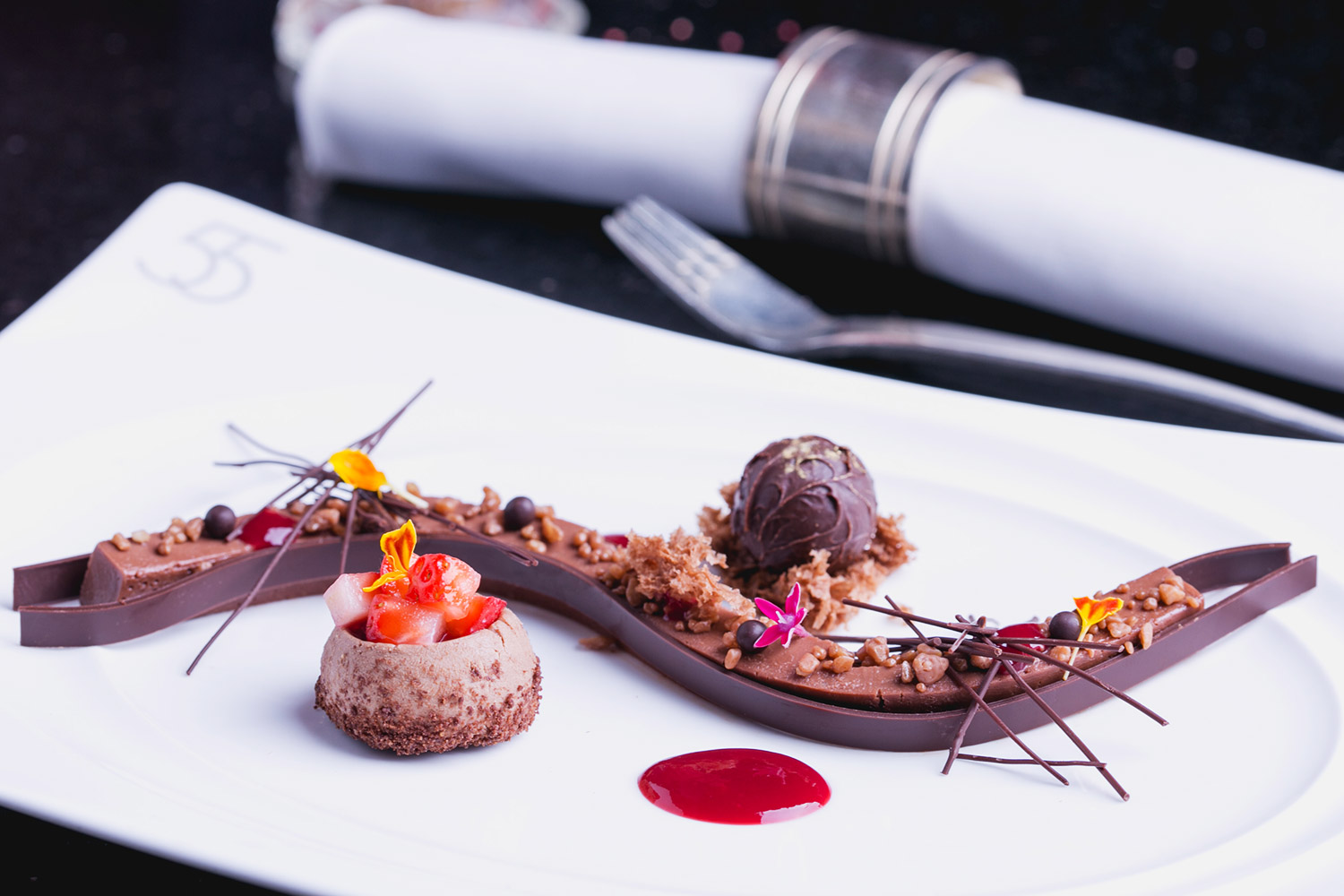 And that’s just the amuse bouche. Following on are three appetizers, a palate cleanser, two main courses, dessert and mignardises, all similarly featuring premium imported ingredients from around the world melded with creative French influences.

It being, hopefully, the New Year’s Eve that puts the pandemic once and for all in the rear-view mirror, there is no room for restraint and so the first appetizer is the classic foie gras dish created by Emile Jung who achieved three stars in the Michelin Guide for his restaurant Au Crocodile in Strasburg. Small farm French foie gras is pan fried and demi-glazed with caramelised orange reduction with a touch of ginger and Beurre d’Isigny, a type of cow’s milk butter made in the valleys of the rivers running into Veys Bay. Surrounding the grand perfectly turned gland are florettes of Pomme Reinette (little queen) sweet apple also caramelised with Beurre d’Isigny and a port wine reduction with a touch of ginger. Savory beyond umami, this, too, is exquisite.

The next dish returns to the sea for lobster medallion or “trottinette” by the late great Michel Roux of Le Gavroche the first three Michelin starred restaurant in Britain, and The Waterside Inn. A large lobster tail is boiled then sautéed in butter. The port wine reduction melds lobster stock and beef stock. A little red current jelly is added just before serving. Underneath is a julienne of leak, carrot, celery and endive with a hint of ginger and red current sauce. 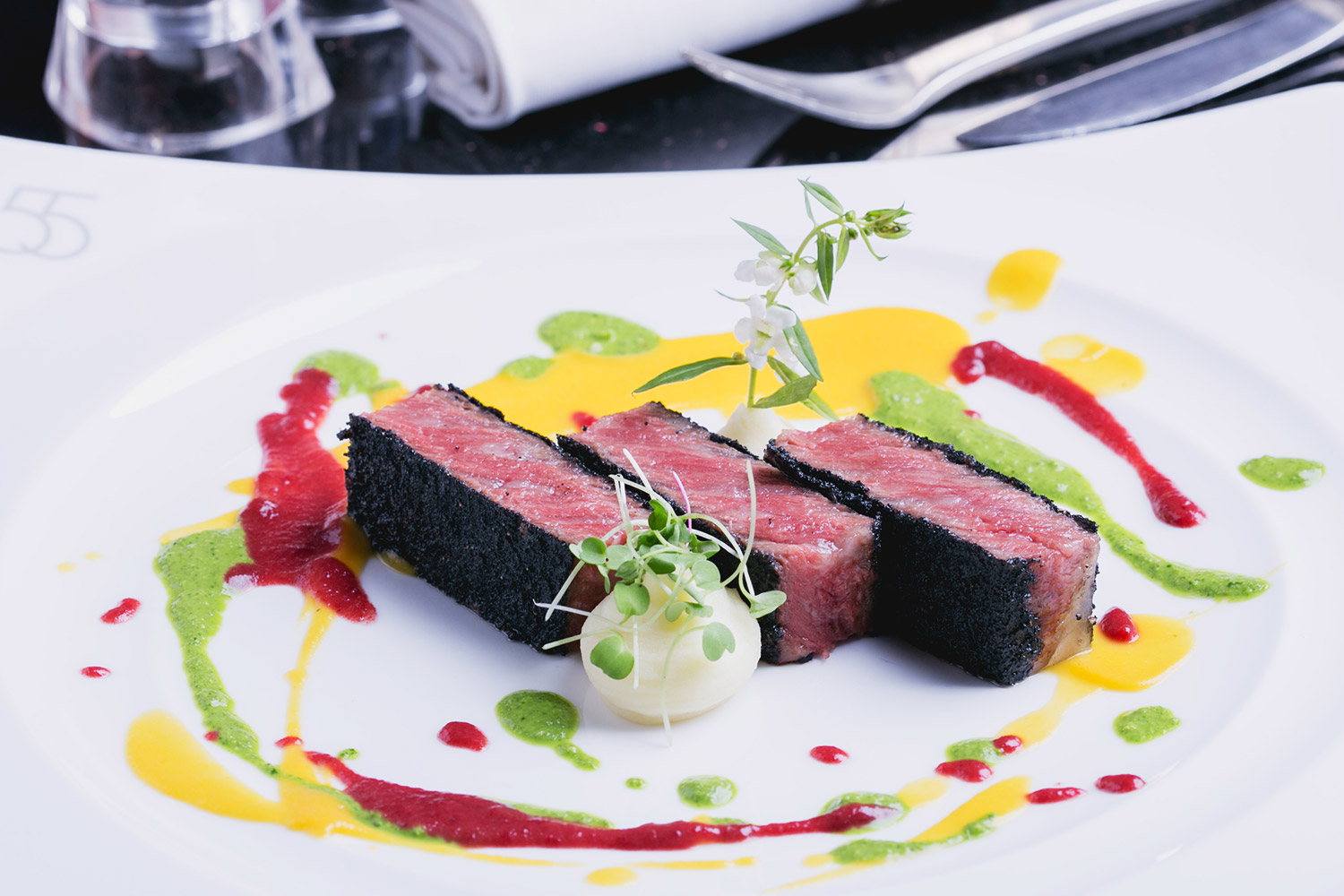 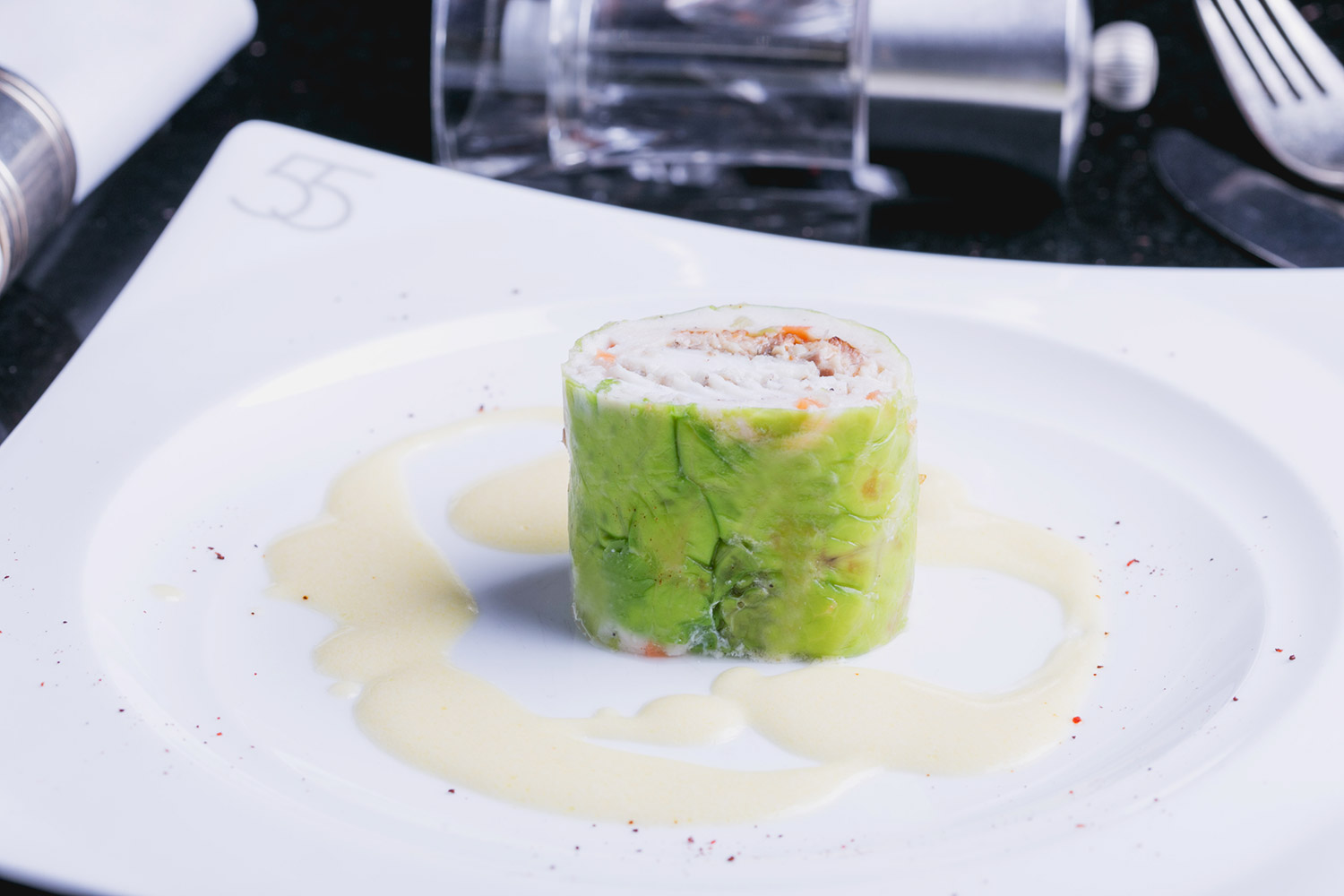 A truly extravagant epicurean delight follows featuring fresh white Alba truffle — a beautiful specimen of the rarest and most expensive kind, with a simply heavenly texture and aroma. The fresh fragottelli pasta is infused with parmesan sabayon buried beneath the exorbitant truffle shavings. This was originally created by three Michelin-starred chef Heinz Beck, founder of The Order of the Knights of Italian Cuisine.

The palate cleanser follows to prepare for the main courses. A perfect lemon sherbet is doused in nothing less than G.H. Mumm Olympe Rosé N.V. Champagne which does indeed set things up nicely for the finales.

First, a fish dish, courtesy of Italian-German chef Heinz Winkler, who in 1981 became the youngest chef ever to receive 3 Michelin stars. Atlantic turbot fish is steamed and wrapped in savoy cabbage, turbot mousse, and butter sauce with fresh horseradish, and juxtaposed with unagi smoked eel. This is creamy French fish cookery at its very finest.

Recognising that beef isn’t in everybody’s diet, a choice of Hitachi Wagyu marble score 5 beef or Kurobota pork is offered for the final main course.

Both are served in a ‘psychedelic way’ with a hint of Jackson Pollock. 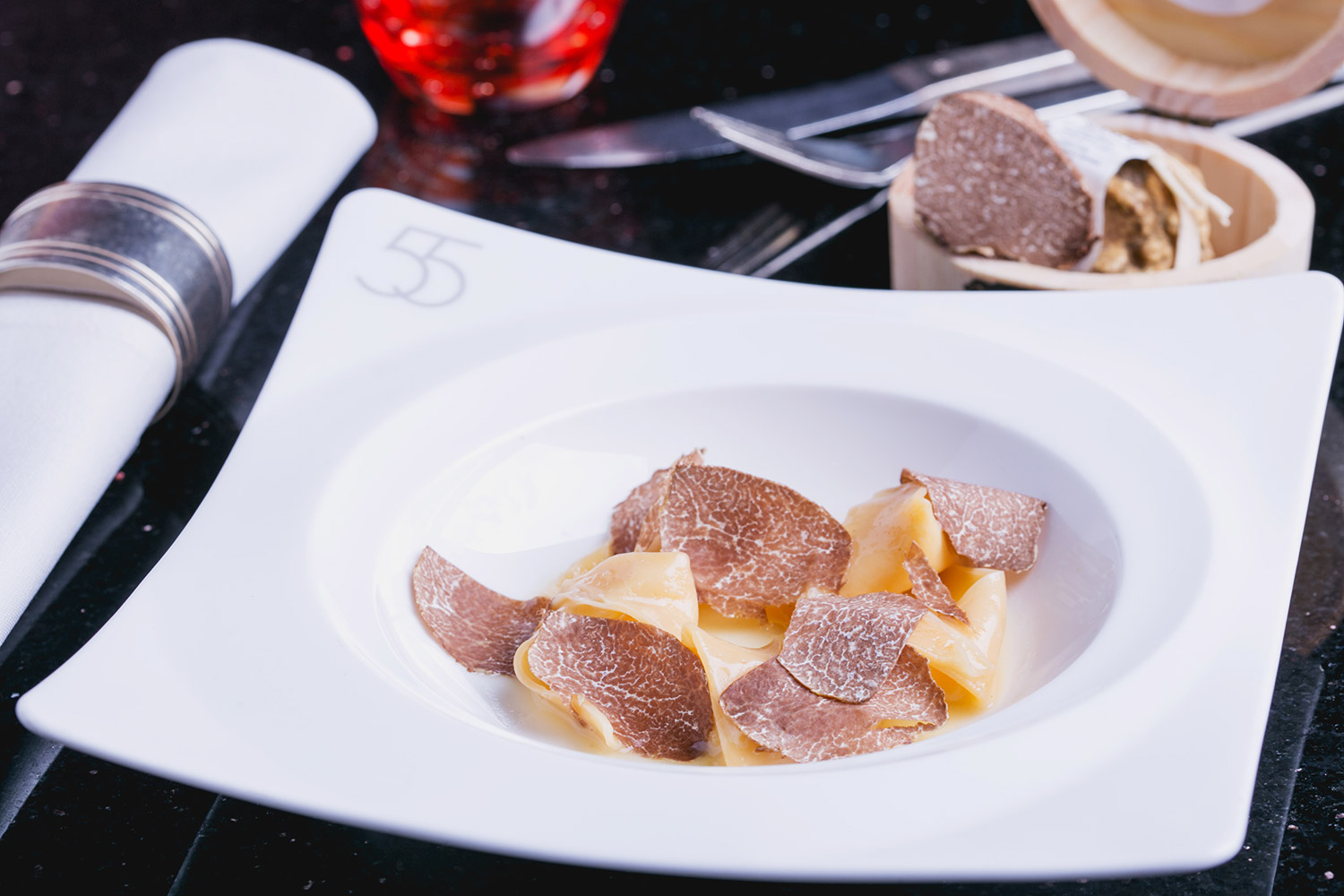 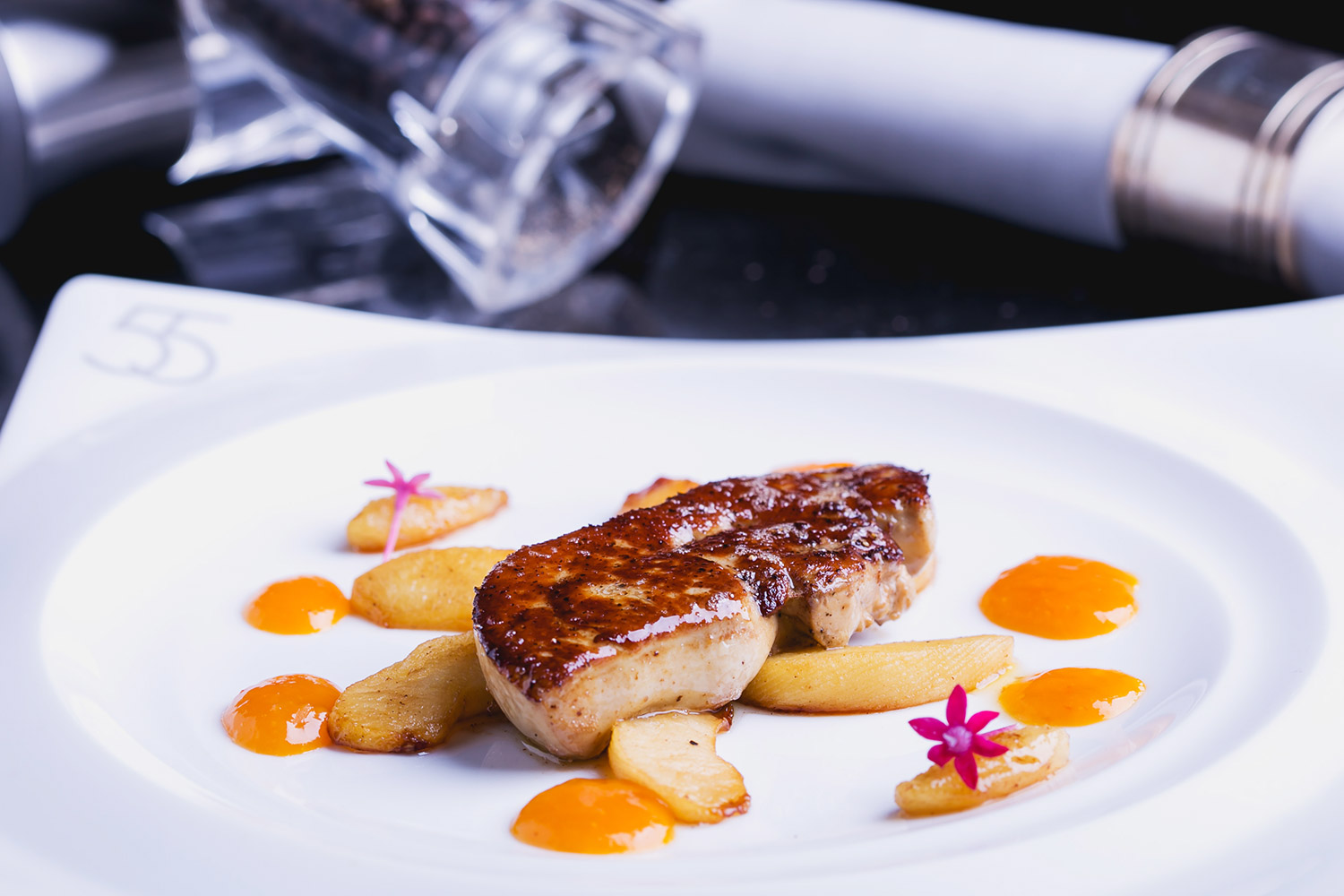 The colourful collage is composed of green pesto with pinenuts and butter; orange butternut and red beetroot. Red wine jus is served on the side so you can pour on as much or as little as you like.

The dish was originated by another great chef, Massimo Bottura, chef patron of Osteria Francescana, a three-Michelin-star restaurant based in Modena, Italy which has been listed in the top 5 at The World’s 50 Best Restaurants Awards since 2010. Say no more!

And so to dessert for which Executive Pastry Chef Thawat takes over with “Valrhona Manjari 64%/Jivara 40%/Raspberry Explosions”. Here the inspiration is Jordi Roca i Fontané, the pastry chef of El Celler de Can Roca, who in 2014 won the inaugural “World’s Best Pastry Chef” award from Restaurant magazine. It’s all about contrasting different chocolate forms so you really sense their individual qualities with a kirsch-filled ganache and tart raspberry sauce taking things to another level.

What better way to truly hit the roof this New Year’s Eve.

For more information or to make reservations, please contact Centara Grand at CentralWorld by calling 0 2100 6255 or email: diningcgcw@chr.co.th.