A teenager has apologised after misleading her former boss into thinking she had taken her own life in a dispute over her cake-making skills.

Ploy, 18, was feeling put out after her boss suspended her from work at a dessert shop. She decided to get back at her by spinning a tale, via her boyfriend's Line account, that she had taken her own life, supposedly out of stress from losing her job. 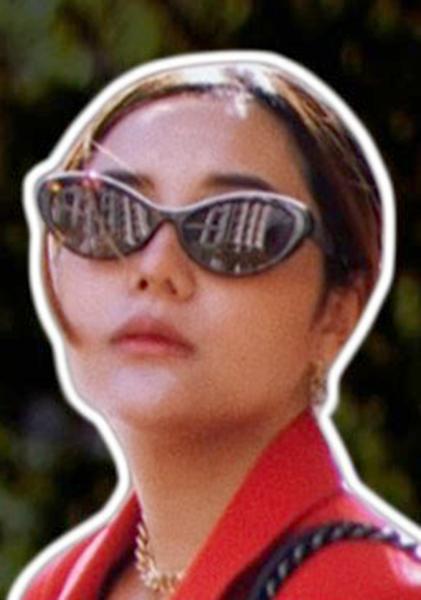 Her boss, Pornnapha Khaisang, owner of the Mango House dessert shop in Muang, Khon Kaen, sent her home on the afternoon of Dec 21. At 10pm that night, she received a message from Ploy's "boyfriend" saying Ploy had decided to end it all. The message asked if she knew what had upset her.

Ploy admits the message was intended to make Ms Pornnapha feel guilty for sending her home. However, the episode rebounded on her, after her employer started digging around and discovered Ploy had fabricated the story. She was exposed on social media as a liar, drawing media attention.

Her inquiries also revealed that Ploy has lied to her boss before. She told a donut shop owner which employed her in February that her mother had died, after her boss criticised Ploy for turning up late for work.

This lie resulted in her sympathetic employer paying 1,500 baht to help Ploy with funeral costs. Exposed by Ms Pornnapha in the cake saga, Ploy denied she had hatched a funeral scam as a means to dupe her bosses.

"I have no problem with money. I sent the message because I felt put out that my cake-making skills were unappreciated. I was also upset that I would have to start looking for work again," she told reporters.

In a lengthy FB post, Ms Pornnapha said she hired Ploy on probation to bake cakes. However, her work wasn't up to it, despite Ploy's boasts of having taken a course.

"From buying supplies once every three days, I was having to go every day, as Ploy wasted ingredients. I said I have no time to train a newbie. Ploy started to cry and walked off. I transferred her wages and that was the end of it, or so I thought," she said.

Later that night, however, she received the Line message saying Ploy had taken her own life. Ms Pornnapha said she and her staff were shocked. She lost sleep over the coming days as she figured out how to help.

"The lies started to unravel when I asked if I could pay for the funeral myself," she said.

She asked Ploy's "boyfriend" where the funeral was being held, and was given the name of a local temple. However, when she looked it up she found there was no temple by that name.

"I also called Khon Kaen hospital, citing the name on Ploy's bank account, but they said they hadn't received anybody by that name," she said.

"When I asked for the mother's number, I was given the number of her own boyfriend.

"I started to wise up, so said I would look after the funeral but her family would have to send the death certificate. It never arrived, and the other side went silent," Ms Pornnapha said.

The boyfriend, she said, posted an image supposedly taken from Ploy's funeral. The young con artist admitted later she copied the image from someone's FB account.

"Finally I had a youngster at my shop call Ploy's number. Ploy answered, which was perhaps her biggest blunder," she said.

Inquiries by Amarin TV suggested Ploy had spun tales to her bosses before. Donut shop owner "Bow" said she saw Ms Pornnapha's post and realised she was talking about the same Ploy, whom she had hired in February.

"She turned up late for work from her first day, and made excuses about her health. On the second day didn't come in at all and didn't bother telling anyone," she said.

"When I warned her, she burst into tears and said she had just lost her mother in an accident in Kanchanaburi. I told her to take some time off, and gave her 1,500 baht for the funeral," she said.

When Ploy returned she carried on as indifferently as she had before, until Bow finally let her go.

Ploy's boyfriend said the first he heard about her con when reporters got in touch. He has been with Ploy for four years and together they have a one year-old son. Ploy said she was sorry for misleading society and pleaded for another chance.

Police are investigating after two men were electrocuted in a Samut Prakan canal following a power leakage from an overhead light. 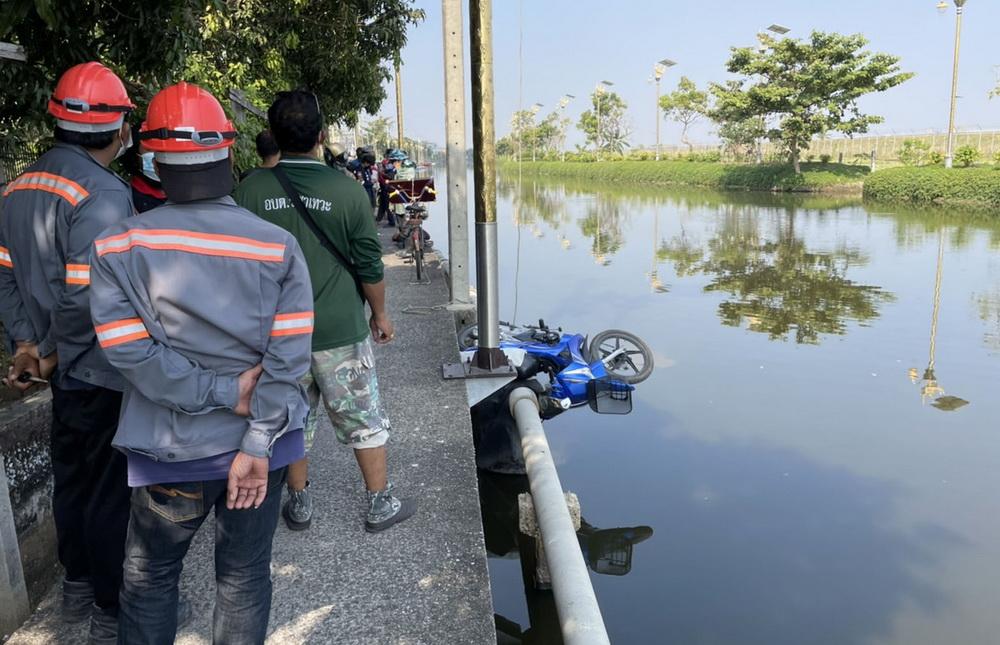 The scene where the motorcycle fell in the canal.

A young man on a motorcycle, Sukkawee Kwakhirun, 27, lost his balance and fell into the Lat Krabang canal at the end of soi 48, King Kaew Road, Village 5 of Bang Pli's Rachathewa on Dec 22.

Sukkawee was electrocuted, as an overhead light had fallen to the base of the pole, which sits in the water. The current passed through the water to his body.

Sukkawee had swerved on the narrow concrete path along the canal to avoid a lottery trader, Assawin Seesalap, 36, who parked his bicycle and jumped in to help the young man.

However, he too perished in the water, likely also the result of an electric shock. The bodies were sent to Samut Prakan hospital for an autopsy.

Sukkawee's uncle, Sonthaya Bangthettham, 57, narrowly escaped the same fate himself after a local turned up at his place nearby to say a motorcyclist had plunged into the canal. He went to help, not suspecting it was his nephew, and had put one foot in the water when he received a shock. He quickly pulled back again and alerted the authorities.

Officials from the Metropolitan Electricity Authority cut the power supply. Yasothon Sukprasong, director of the MEA in Bang Pli, said the leakage of current came from the street light, which is normally switched off during the day.

At the time of the accident, however, it was still on. "Sukkawee went into the water close to the base of the power pole, so was electrocuted, followed by Assawin. The pole sits on a ground column, and the power leakage passed to the water. We have contacted both families," he said, while expressing regret for the loss of life.

The double fatality has highlighted a potential gap in light maintenance in the district, with the MEA and tambon Rachathewa reluctant to accept responsibility.

The MEA's Mr Yasothon said the light is the property of the tambon. "We have to talk to them again and tell them they are not supposed to be on in the daytime," he said.

However, Songchai Nokkamin, CEO of tambon Rachathewa, said his staff replace the lightbulbs if they are faulty, but that's it. "We ask the MEA to put up the wiring, install and buy the lights. We have to decide whose property it is, ours or theirs. We pay for the work, but they do it for us," he said, adding it would be churlish for the MEA and tambon to pass the buck where locals lives' are at stake.

"We maintain the lights across the district, but in all the years we have had street lighting we have done nothing but buy new bulbs. We don't get involved if the lights are worn out or the wiring needs replacing," he said.

The concrete pathway where Sukkawee and Assawin came upon each other is only 1.5m wide. It is the main route for locals living in the canal community to get out and about.

Sukkawee's mother, Surattha Kwakhirun, 57, said the pair should not have died in such a tragic manner. "I am sure my son would not have died if he had merely fallen in. If the electric shock killed him, authorities should take responsibility," she said.

The MEA said later on its FB site that the current leakage stemmed from a steel lighting rod which holds the lamp, and insisted it came under the tambon's care. Bang Kaew police are investigating.

Blinded by the lights

Two men on a motorcycle who chased after a motorist in a car while wielding a large knife say they merely intended to send a warning, not take his life.

Suwan Sripirod, 31, and Pradit Bamrungin, 33, handed themselves in to Pak Kret police in Nonthaburi on Dec 27 after a clip of the chase was shared on social media.

They say the car owner they chased spoke brusquely when they complained that he had blinded them with his headlights outside a 7-11.

The encounter occurred outside the store on Chaeng Wattana Road in Bang Phut about 11pm on Christmas Eve.

Thammarat Bunjongmuang, 25, who lodged a complaint with police, said he put on his lights while waiting in his Toyota Yaris for his friend, who was inside the store. A Honda Wave motorcycle also had turned up in front with two occupants.

As they prepared to go, one of the men on the motorcycle tapped on his window and said: 'Your lights are shining in our eyes. Didn't you think to switch them off?"

Mr Thammarat said he apologised and drove off. As he was heading home, the motorcycle suddenly appeared, pursuing his vehicle and shouting at him to pull over.

He sped away as he did not have a weapon, unlike the pair on the bike. The clip shows the pillion passenger holding up a large wood cutting knife. In shock, Mr Thammarat's friend in the car filmed the encounter on his phone.

As Mr Thammarat rounded a bend, his motorcycle pursuer lost his balance, tipping his friend off the back and onto the road. However, such was his rage that he kept chasing the Yaris until Mr Thammarat arrived at his condo. He quickly told the security guard to put up the wooden barrier to stop the motorcycle gaining access.

A work friend of the motorcycle pair, "Chat", said Mr Thammarat had spoken brusquely when they warned him about the lights. "Why...what's it to you?" he is said to have replied.

This angered the suspects, who gave chase. Both had wood cutting knives handy as they use them to put up signs at work. However, they did not mean to take their lives, just to threaten them. Police were planning to charge them with having a weapon in a public place.