Swiss watchmakers have joined in the revelry of the Lunar New Year, which begins next Tuesday, with the tiger taking over from the ox as per Chinese astrology. Based on a 12-year cycle, the Chinese zodiac associates each year with an animal possessing different personality traits.

The powerful, strong-willed and daring zodiac animal has been captured through various artistic crafts on mesmerising dials of limited editions that serve as a talisman as much as a timepiece for those born in the Year of the Tiger. 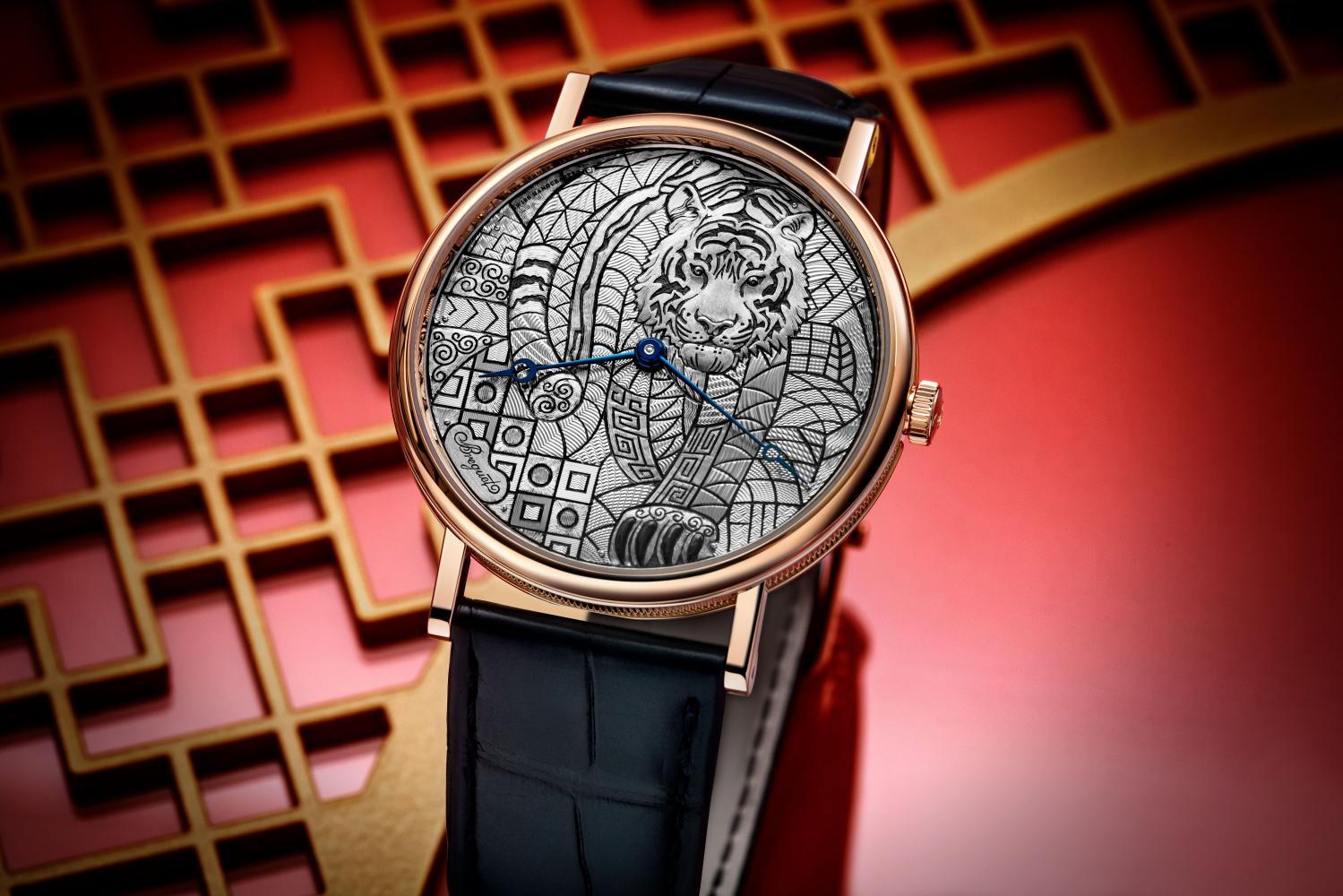 Breguet pays tribute to the power of the tiger through its in-house guilloché and engraving expertise.

The dial motif is created in three stages for a play on perspective. First, the work begins with engraving the separation contours, part of the decoration and the tiger on the gold using the bas relief technique, which consists of carving motifs in extremely small dimensions.

These sculpted sections then need to be coloured in black to provide the desired depth and contrast. Finally, the rest of the motif is created using guilloché work. This artisanal method, which requires great dexterity, consists of working with a burin on the areas to be hollowed out according to an extremely precise motif.

The guilloché work to create the geometric patterns is carried out using machines with the latest ergonomic, lighting, optical and precision equipment.

The 40mm rose gold timepiece is available in only eight pieces, a lucky number in Chinese culture.

Since 2013, Chopard has celebrated the Chinese New Year with the ultra-thin L.U.C XP model boasting a lacquered dial with the sign of each Chinese zodiac year, rendered by the ancestral Urushi Maki-e technique combining lacquering and gold dust.

With 88 pieces available, the model is housed in a 39.5mm case carved from rose gold, sourced from an ethical supply chain. The slim bezel allows more room for the dial, handcrafted in the workshops of the century-old company Yamada Heiando by master lacquer artist Minori Koizumi.

In accordance with the Japanese ancestral craft, gold flakes are placed between layers of lacquer made from the sap of the Toxicodendron vernicifluum tree, to light up the background of a bay surrounded by cliffs. Claws out and jaw turned sideways, the third Chinese zodiac animal appears to be deliberately flaunting its strength and majesty on the dial. 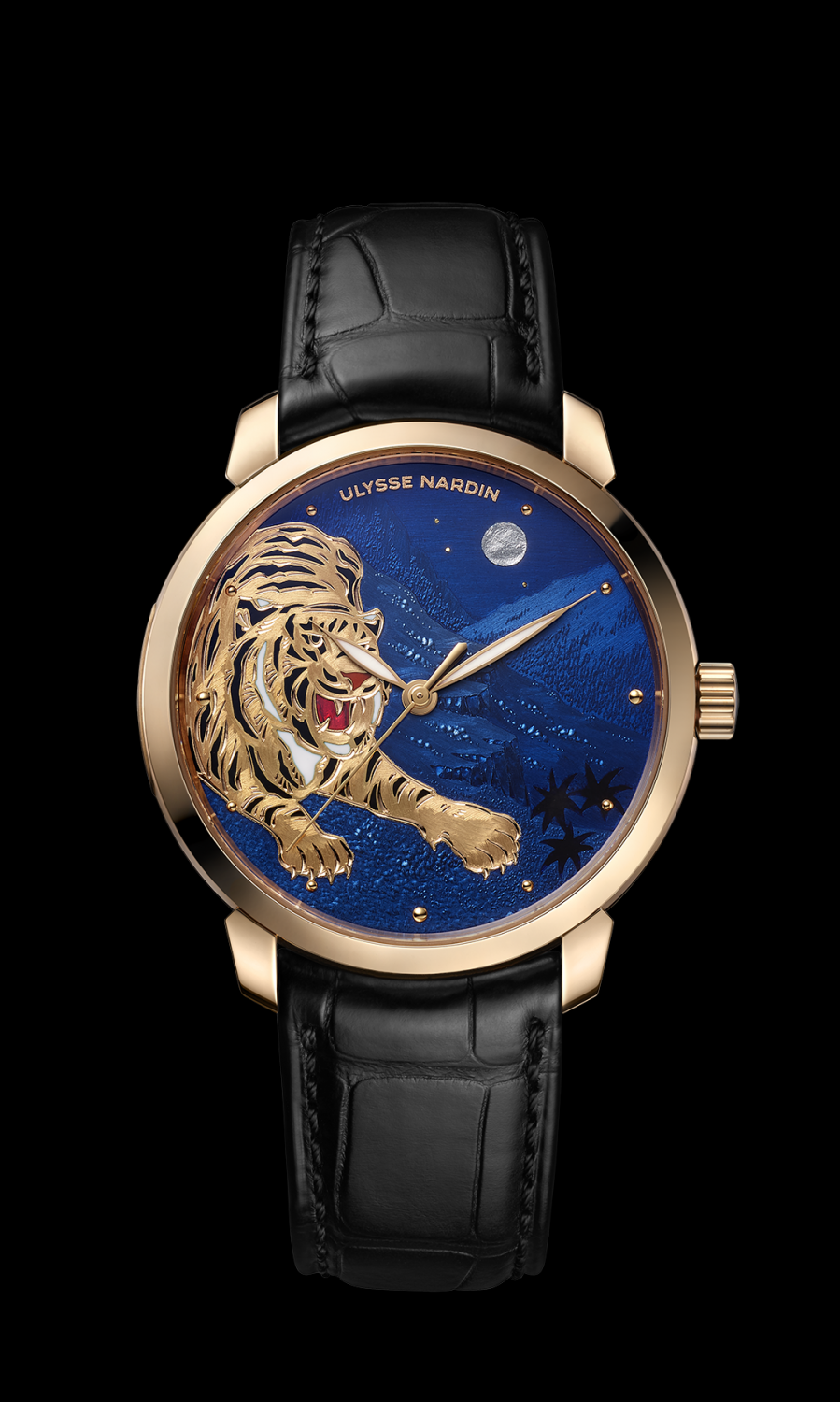 A limited-edition series of 88 pieces, the 40mm rose gold Classico Tiger charms with a dial featuring champlevé and paillonné enamelling, executed by Donzé Cadrans acquired by Ulysse Nardin in 2011.

The champlevé technique involves carving directly onto the dial, creating individual "cells" that are then filled with enamel, whose colours come from a careful blending of different metallic oxides. The dial is fired until the enamel melts before being smoothed and polished. In the final and most meticulous step, metal elements are chiselled onto the surface to enrich the motif.

Cut from a thin gold or silver leaf, paillons or strips are placed by hand one by one in the art of paillonné enamelling. On the dial of the Classico Tiger, the moon is made with silver strips and the stars are made of three gold strips. The paillons are covered with enamel before firing to achieve a translucent coat that will protect the motifs. 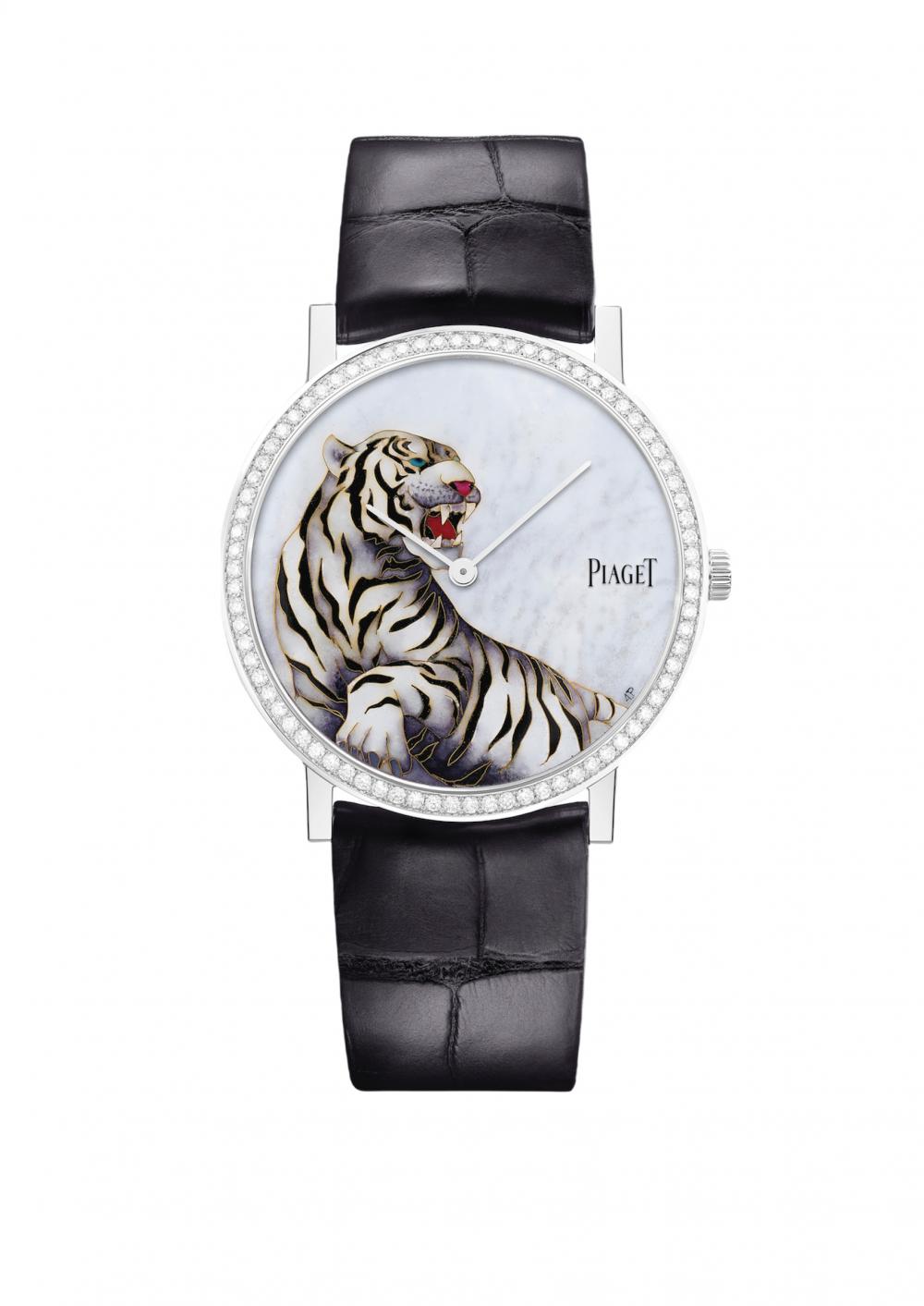 This limited-edition of 38 timepieces showcases a dial featuring cloisonné grand feu enamel, illuminated by the diamond-set bezel of the 38mm white gold case.

Master enameller Anita Porchet employs the cloisonné technique, which involves transferring the design onto the surface of the dial using gold ribbons to create miniature partitions, or cloisons, in which the different enamel pigments are placed.

The dial is then fired in the kiln multiple times at temperatures between 820-850C. Once finished, the dial is varnished, capturing the tiger with open jaws to roar in the Lunar New Year. 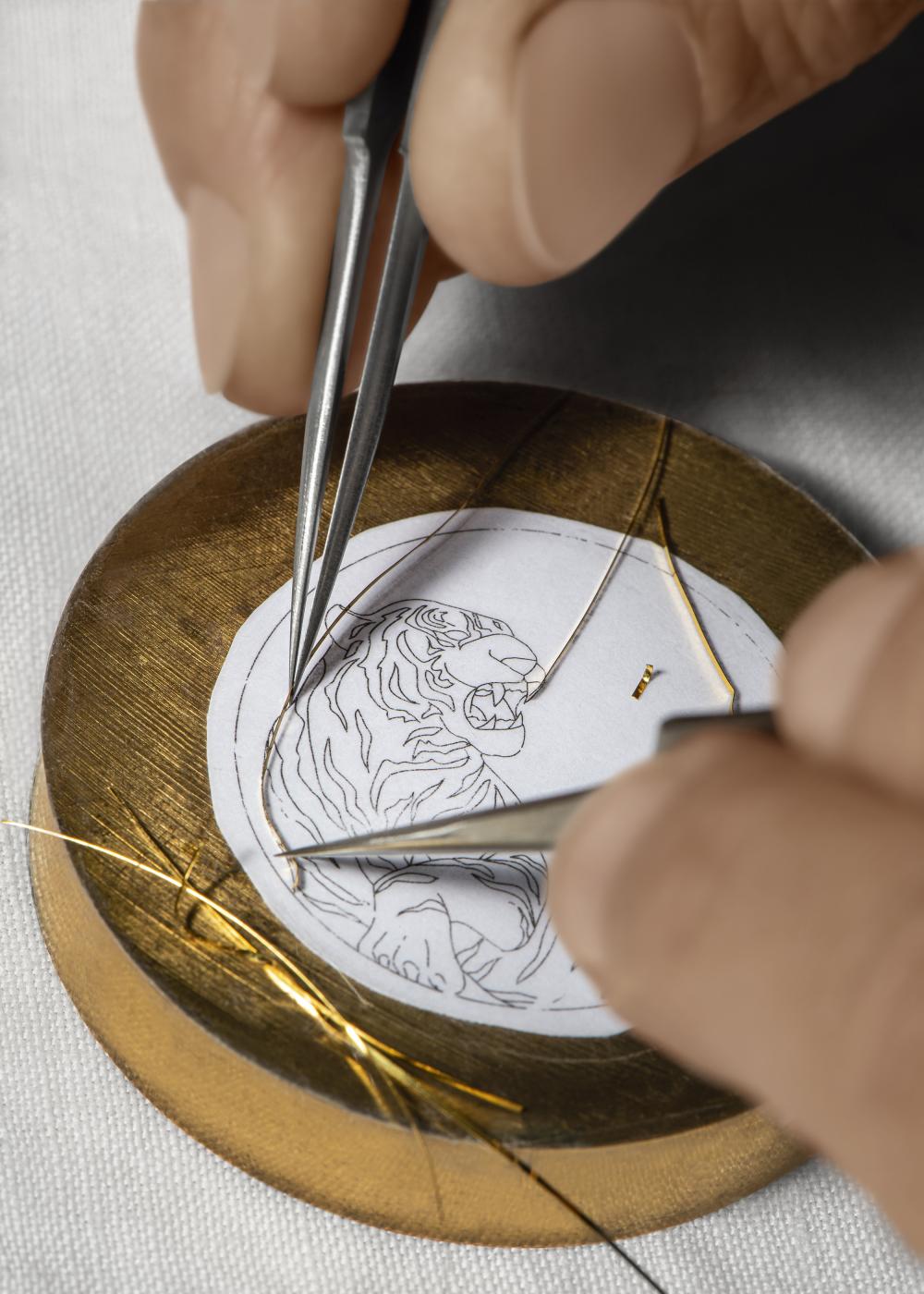 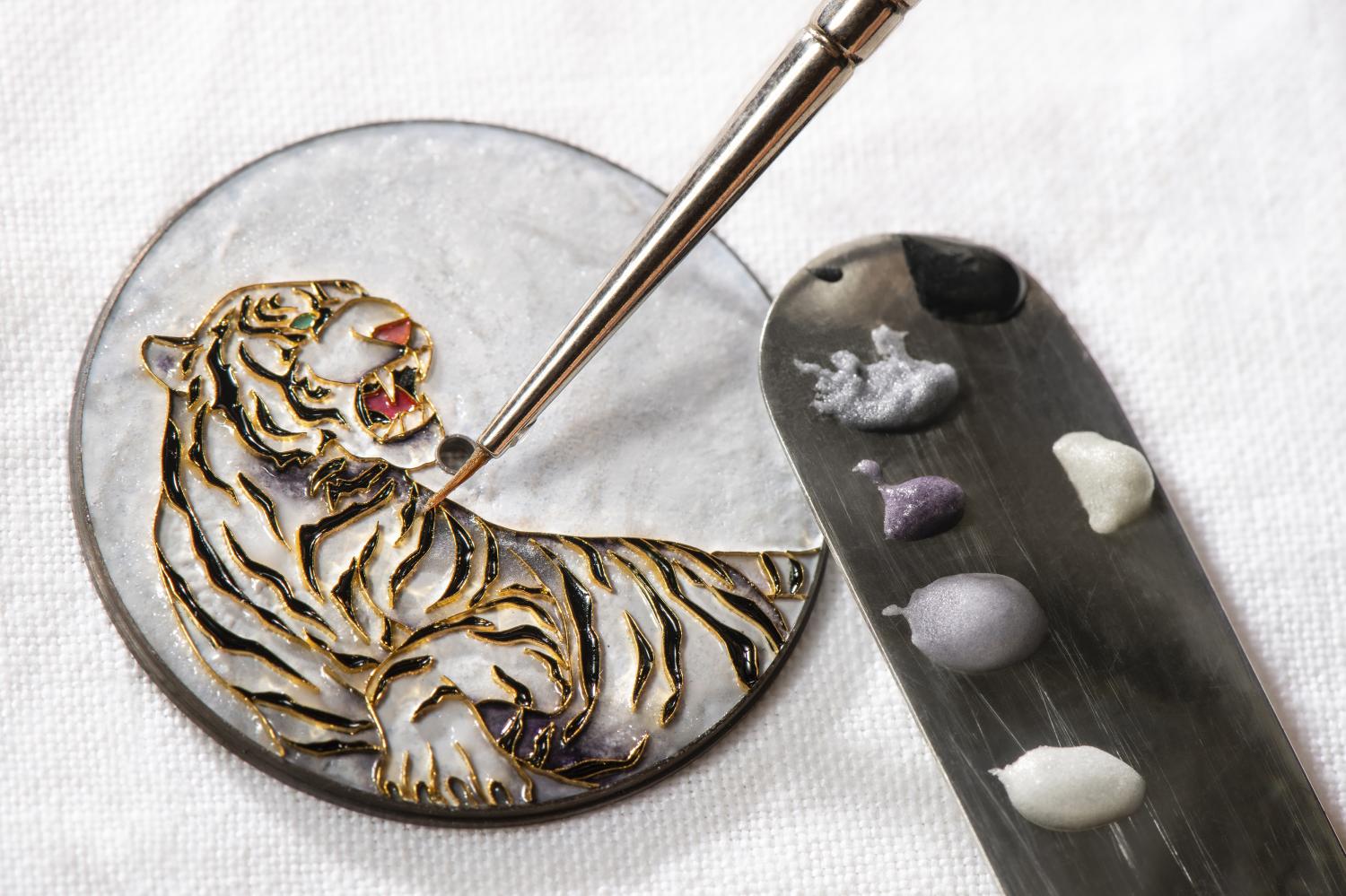 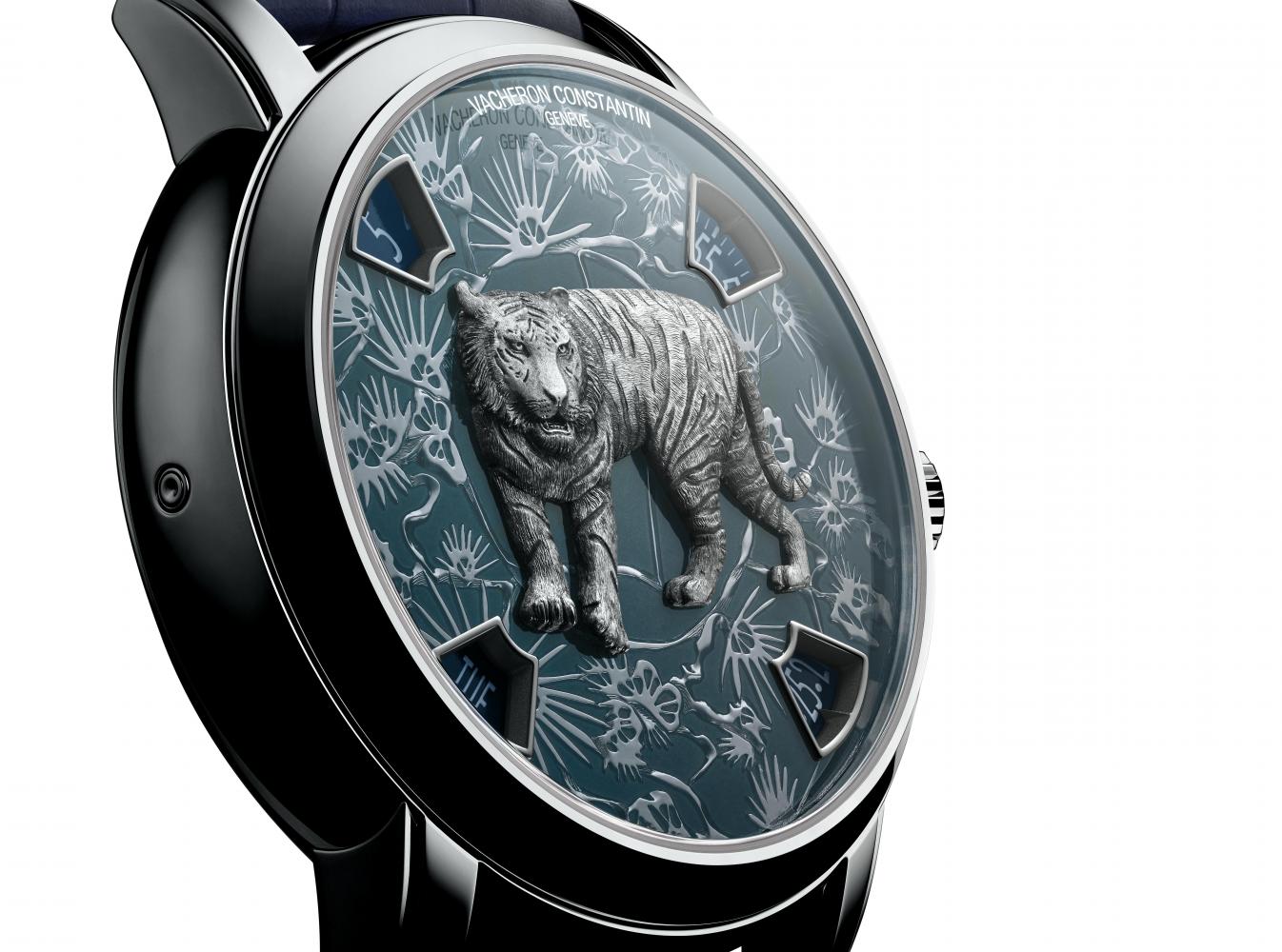 Vacheron Constantin Métiers d'Art The Legend of the Chinese Zodiac.

Métiers d'Art The Legend of the Chinese Zodiac

The artistic approach is an interpretation of Chinese paper-cutting known as Jianzhi, echoed in Swiss culture through its Scherenschnitt paper-cutting.

Based on classic Chinese iconography, the vegetal motifs are etched directly in the metal, with the pattern remaining semi-embedded and standing out from its gold base by a subtle stage-setting of accentuating reliefs creating a depth effect.

The following grand feu enamelling involves applying the enamel in successive layers and firing at temperatures between 800C and 900C. The hand-engraved tiger is applied to the centre of the dial of the hands-free timepiece housed in a platinum or pink gold 40mm case -- each version is a limited series of 12 pieces. 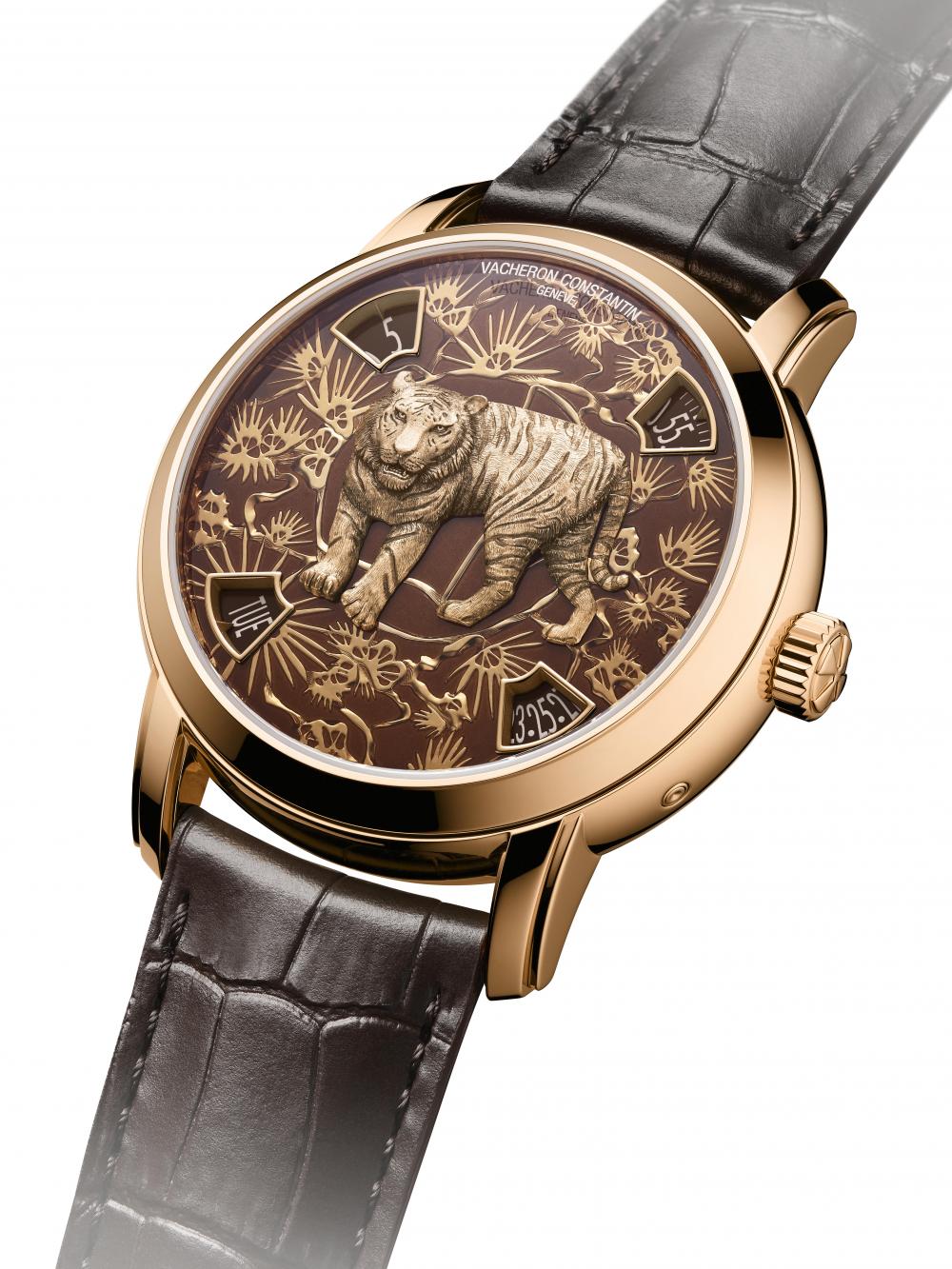 Vacheron Constantin Métiers d'Art The Legend of the Chinese Zodiac. 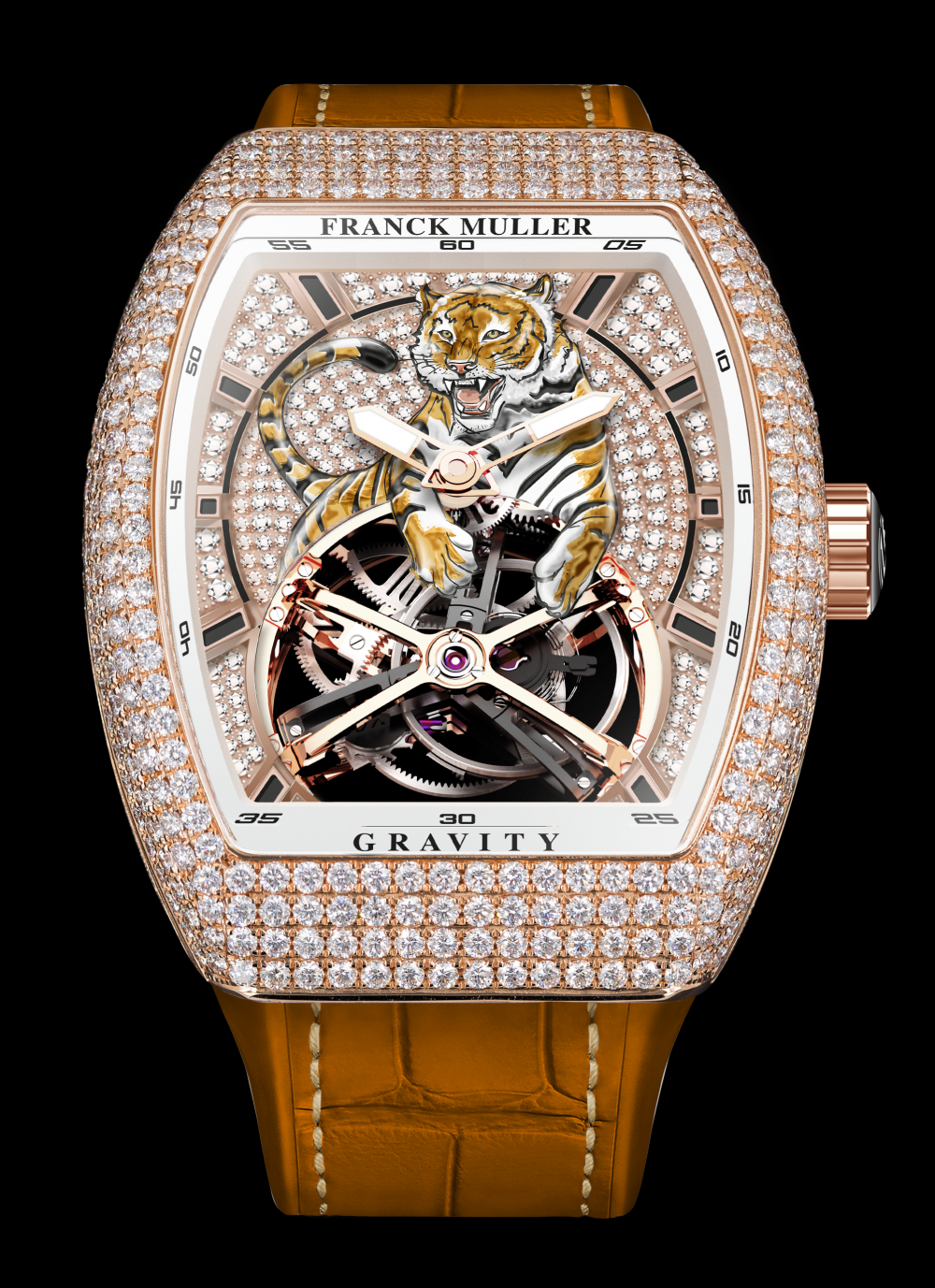 Amid a background of glittering gemstones, the tiger leaps over the Gravity tourbillon which occupies more than half of the dial. The oversized tourbillon has an elliptical carriage, with its bridges and pillars arched in convex and concave forms, echoing the design of the case and dial and lending a three-dimensional appeal to the watch.

The large case allows more space for the miniature sculpture of the pouncing tiger, struck on a thin piece of brass, shot-blasted to smoothen out the surface, and then hand-painted with lacquer, layer by layer, to create the exact shades on the majestic feline.

A total of 36 layers of tinted, translucent lacquer are applied to bring the Asian tiger to life, with 10 layers just for the eyes alone.

Each of the three variations is limited to only three pieces, as a reference to the third Chinese zodiac animal. 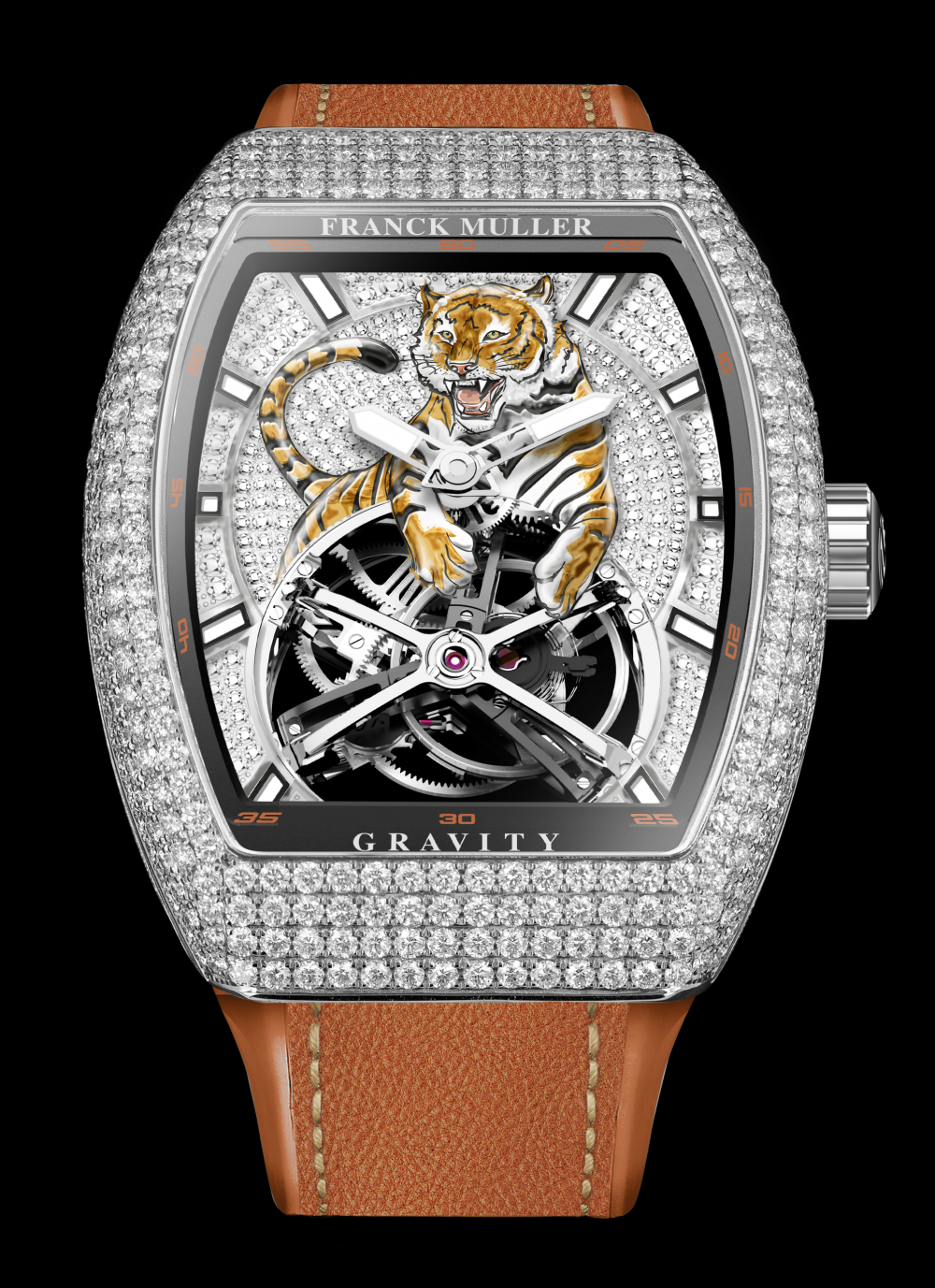 Explore the benefits of studying in EU