published : 16 Feb 2022 at 04:00
newspaper section: Life
writer: Punsita Ritthikarn
'I am You' exhibition at Number1Gallery.

In the solo exhibition "I Am You", Prawit Lumcharoen brings back his signature fat boy character with hilarious facial expressions, known as WIT, in a new version of original artworks. Inspired by his bright, bubbly personality, the Thai painter depicted himself as this chubby boy in a metallic-coloured body stepping into the world of his favourite artists.

"I previously applied foil to create this fat kid, who looks funny with a cheeky grin, similar to me. However, this time, I used less foil to make his body smoother and cleaner for other versions," he said.

For this new series of oil-on-canvas paintings, now on view at Number1Gallery, his design process began with sculpting a WIT model.

"Generally, other artists make sketches, but I carved a real model and then painted him in the way of my favourite artists' works. I created simulated situations and adapted his gestures so that he could fit into artworks I like," he explained.

In this collection, Prawit recreated and replaced many famous characters with WIT, such as in Auguste Rodin's bronze sculpture The Thinker, Banksy's mural painting Girl With Balloon and Michelangelo's David. Unlike those world-renowned masterpieces, Prawit's collection is, however, ridiculous and features a sense of playfulness and humour. 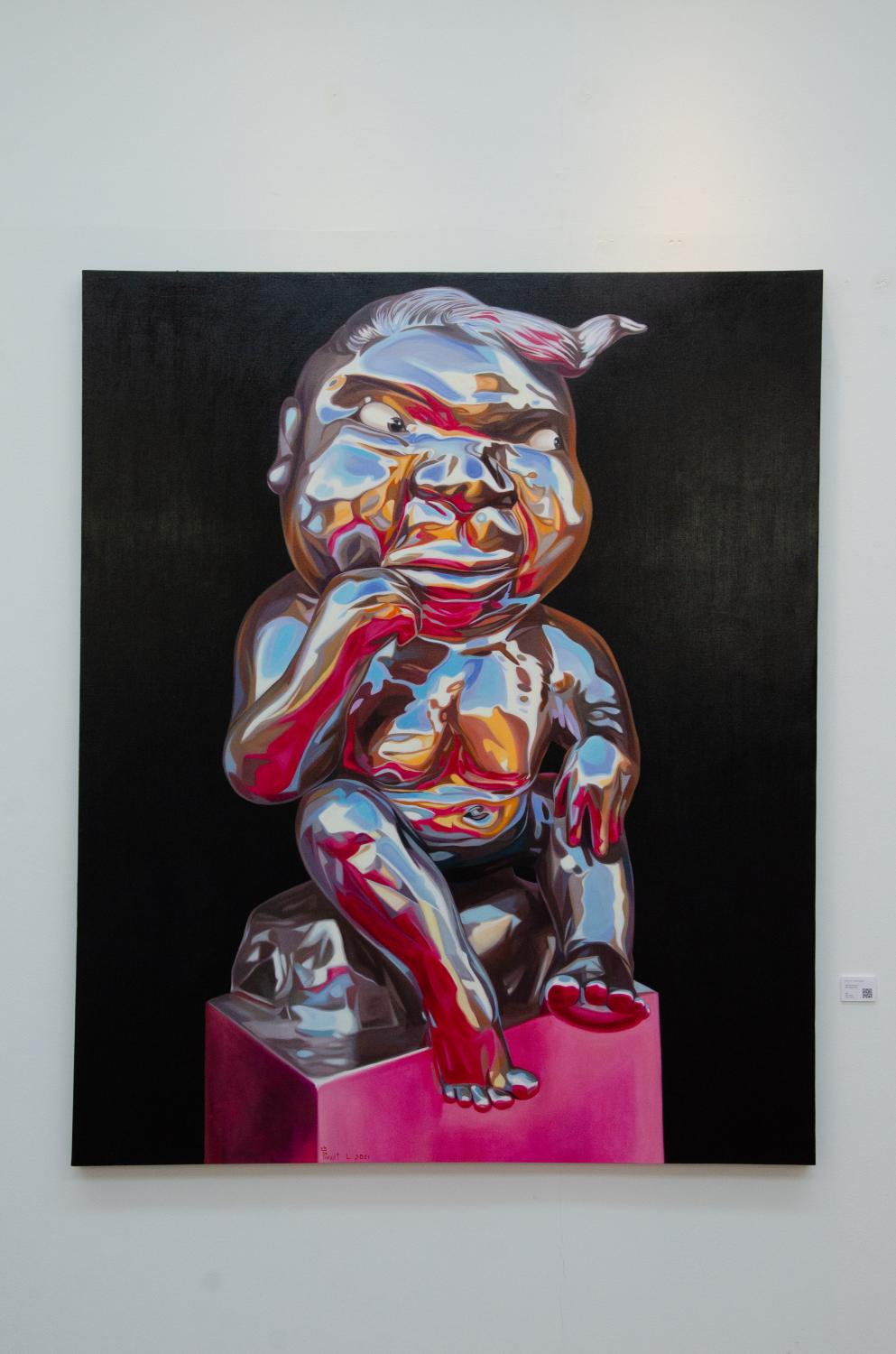 In his original work Fake The Thinker, the painter added Keith Haring's barking dogs as it was funny to see them growl and snap at fat boy WIT who sits still on a rock and pretends to think. Similarly, WIT in the painting Stop is surrounded by Haring's dogs. The American graffiti artist's pop-art imagery led to Prawit's simple line drawings, vibrant design and visual language in the latest collection.

Since Prawit is also a fan of Jean-Michel Basquiat's artwork, his painting The Last Monster features a Pez dispenser and a dinosaur wearing a crown. Like Basquiat's unique style, Prawit's is more figurative, combining the elements of street art style with neo-expressionism.

"I really love Basquiat's dinosaur icon, so I compared myself to a monster and then came up with the idea of creating a land of monsters, encircled by WIT," he said.

Prawit illustrates another tubby boy trying to catch balloons and bring them back to a girl. In his set of two paintings known as My Balloon, the artist imitated Banksy's work by relating to the story of the same girl who lost her love, innocence and dreams. Instead, he conveyed a lighter tone in this sad story to evoke a feeling of hope and kindness. 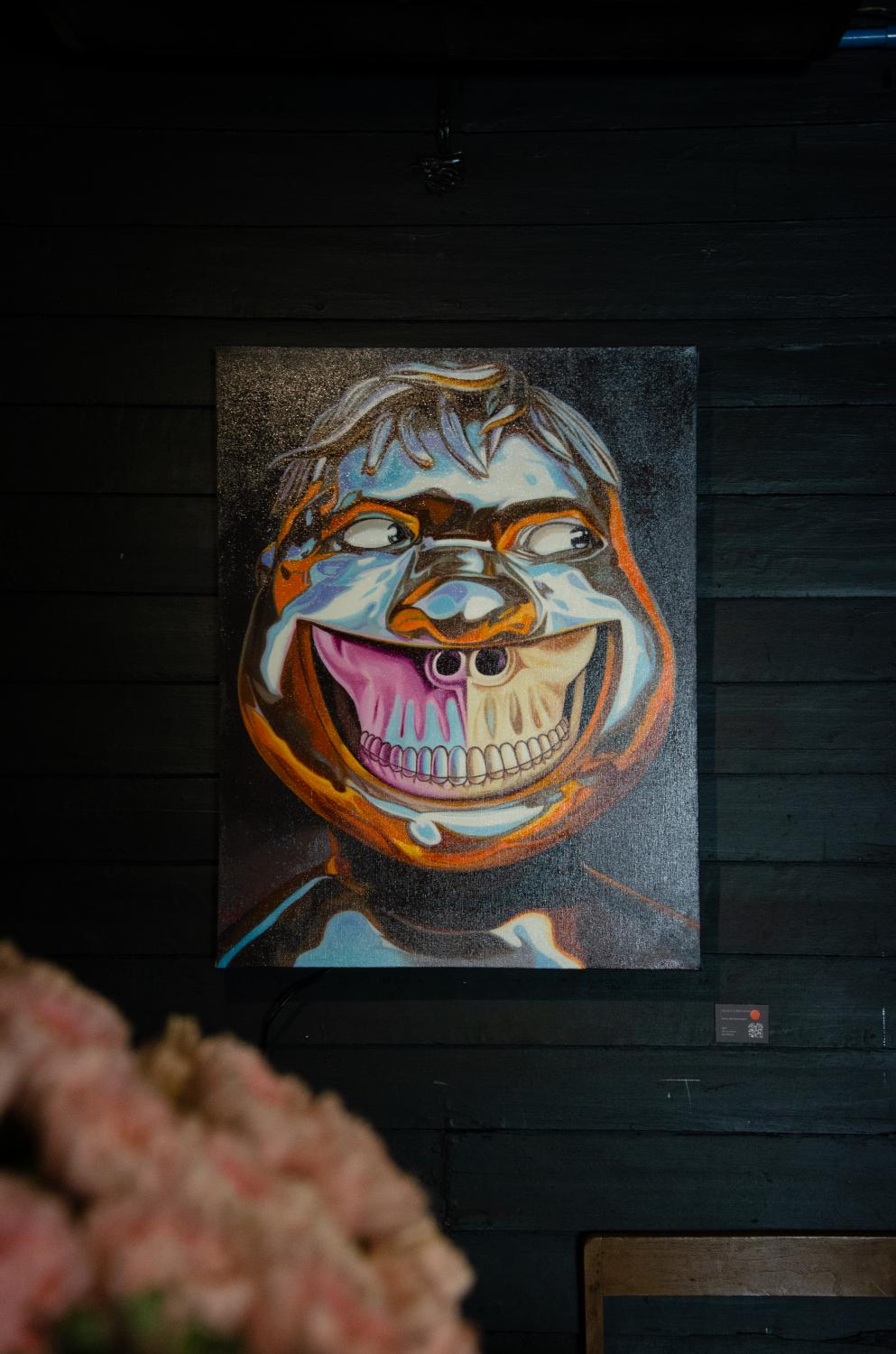 Prawit also emulated Andrew Wyeth's painting Christina's World, telling the tragic story of Wyeth's neighbour, Anna Christina Olson, who suffered from a degenerative muscular disease but refused to use a wheelchair and dragged her body with two arms to crawl to her farmhouse. However, his work Single Mum has sad vibes about a woman and a village atmosphere, full of loneliness and isolation, as Christina is replaced with an Asian female lying down in a big field and desperately looking up to her children.

The painting Moon Walk is one of Prawit's favourites as he personally likes and admires all iconic 90s artists, especially the King of Pop Michael Jackson.

"I created a WIT model performing a concert. I made him dance and act like Jackson. I also carved WIT standing like David," he added.

Comparing to the original statue's height, the artist selected a very large canvas size for the painting David Is Dead. In this way, his WIT sculpture could be sizeable enough in order to be visible from below.

"I Am You" is on view at Number1Gallery, Silom 21, until 26 Feb. Visit number1gallery.com for more information. 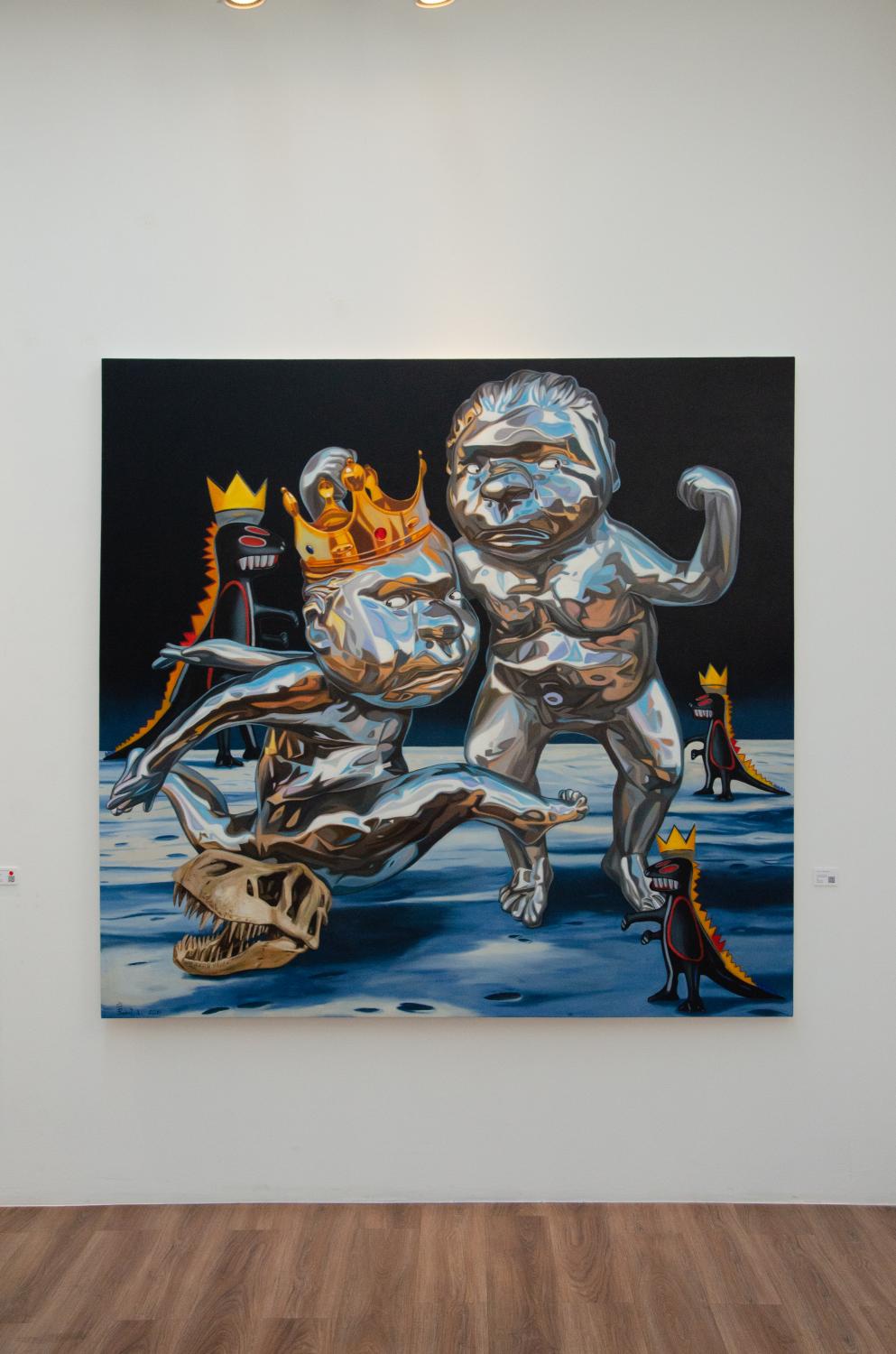 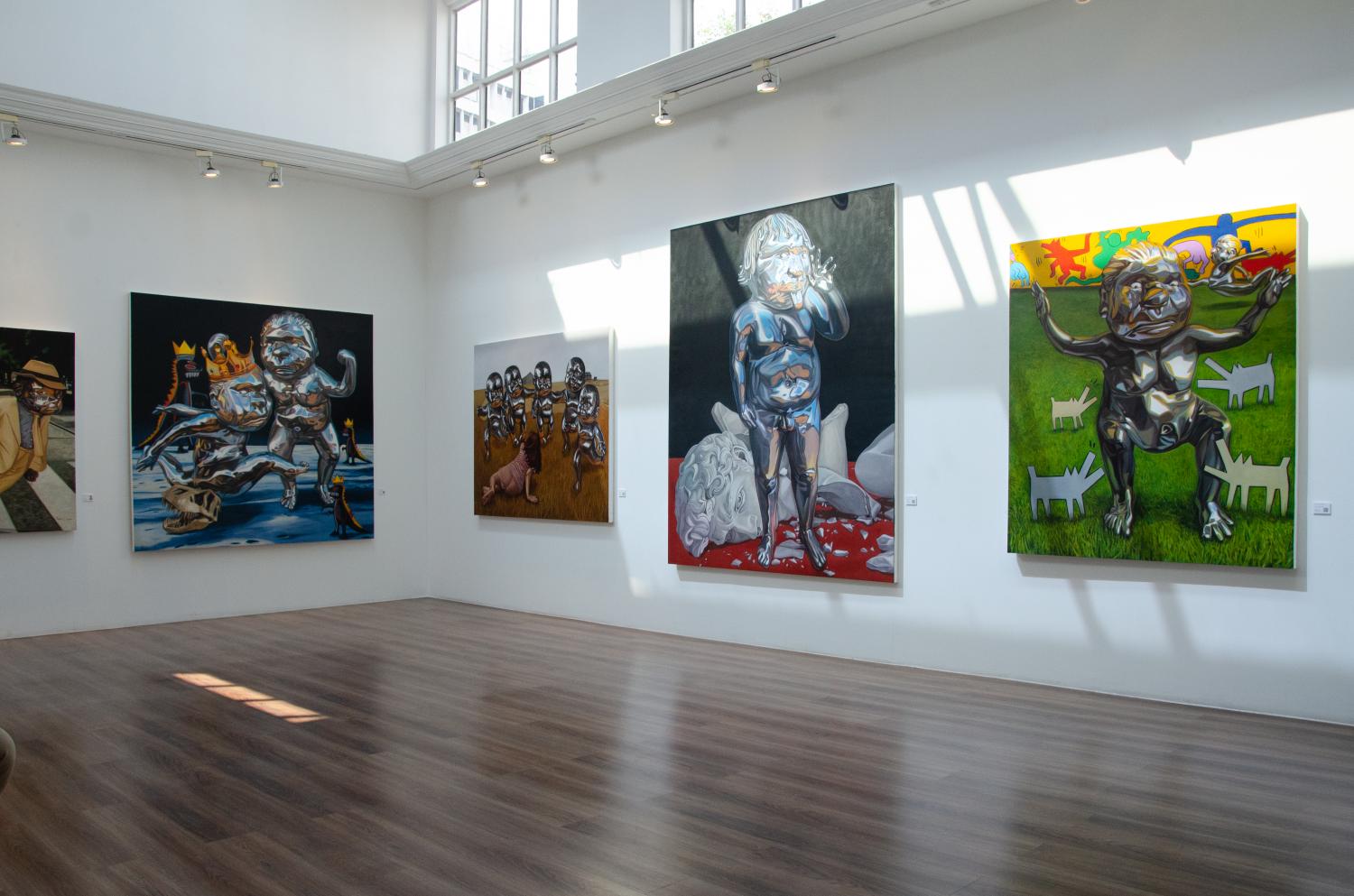 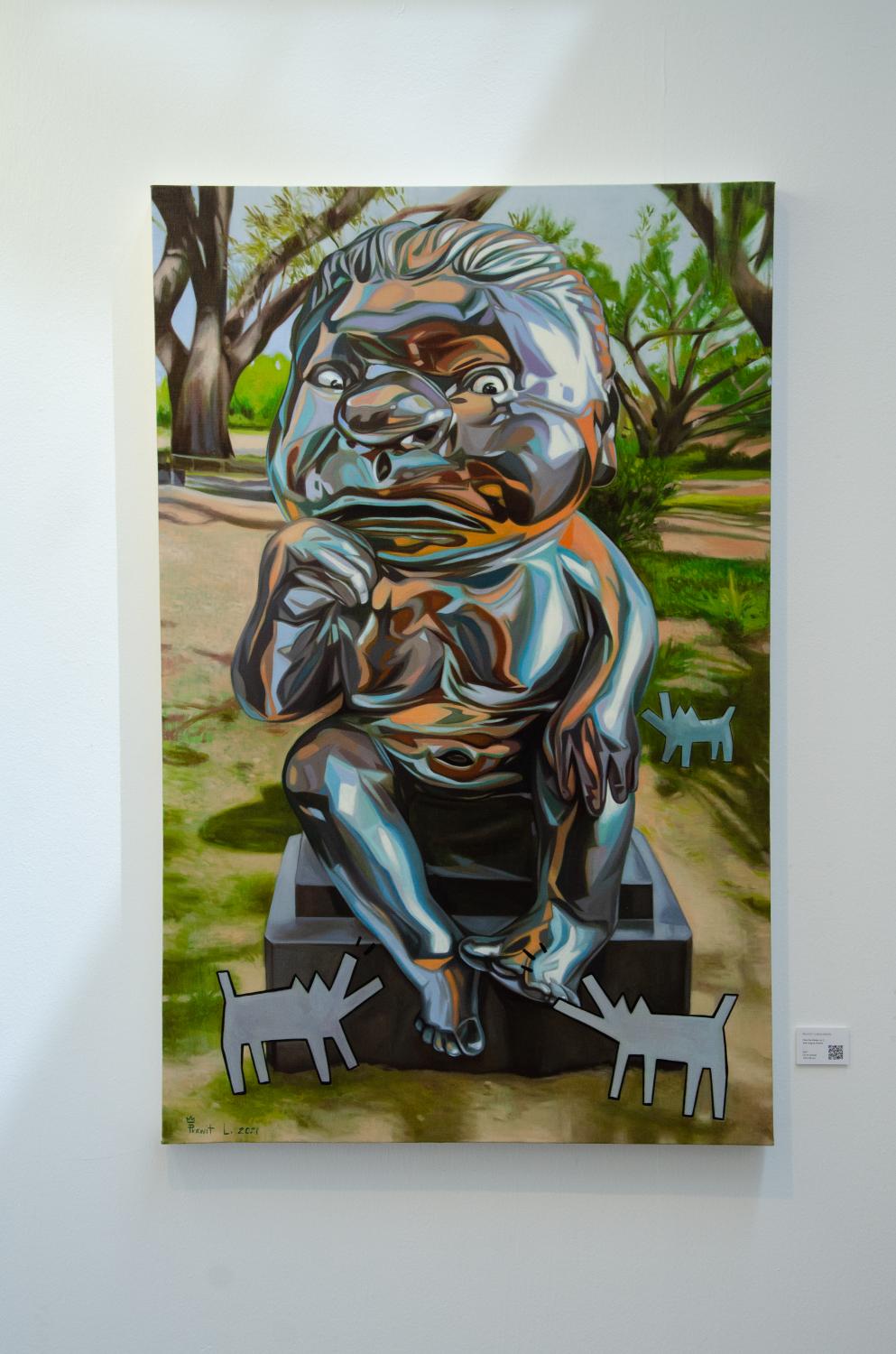 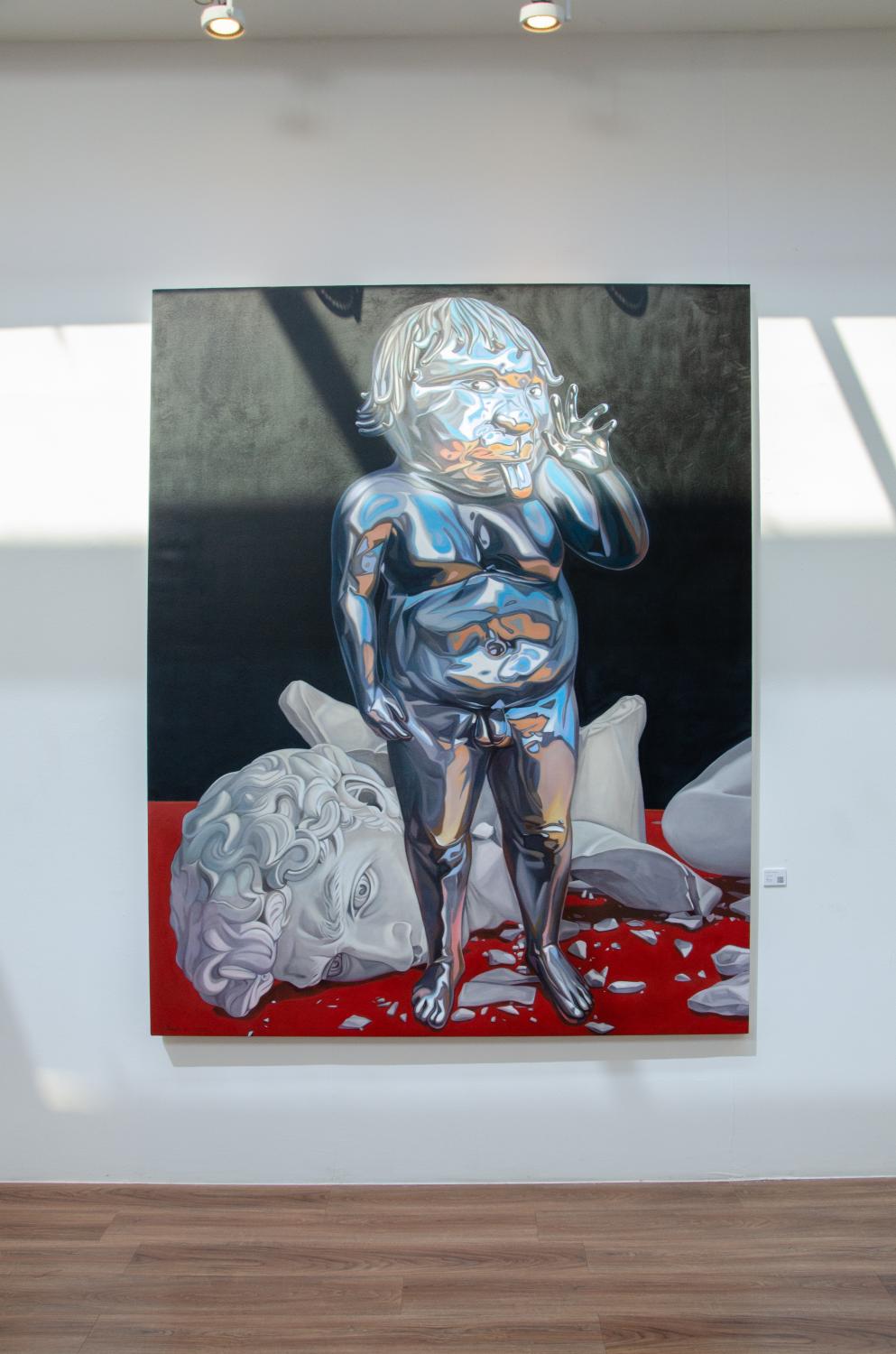 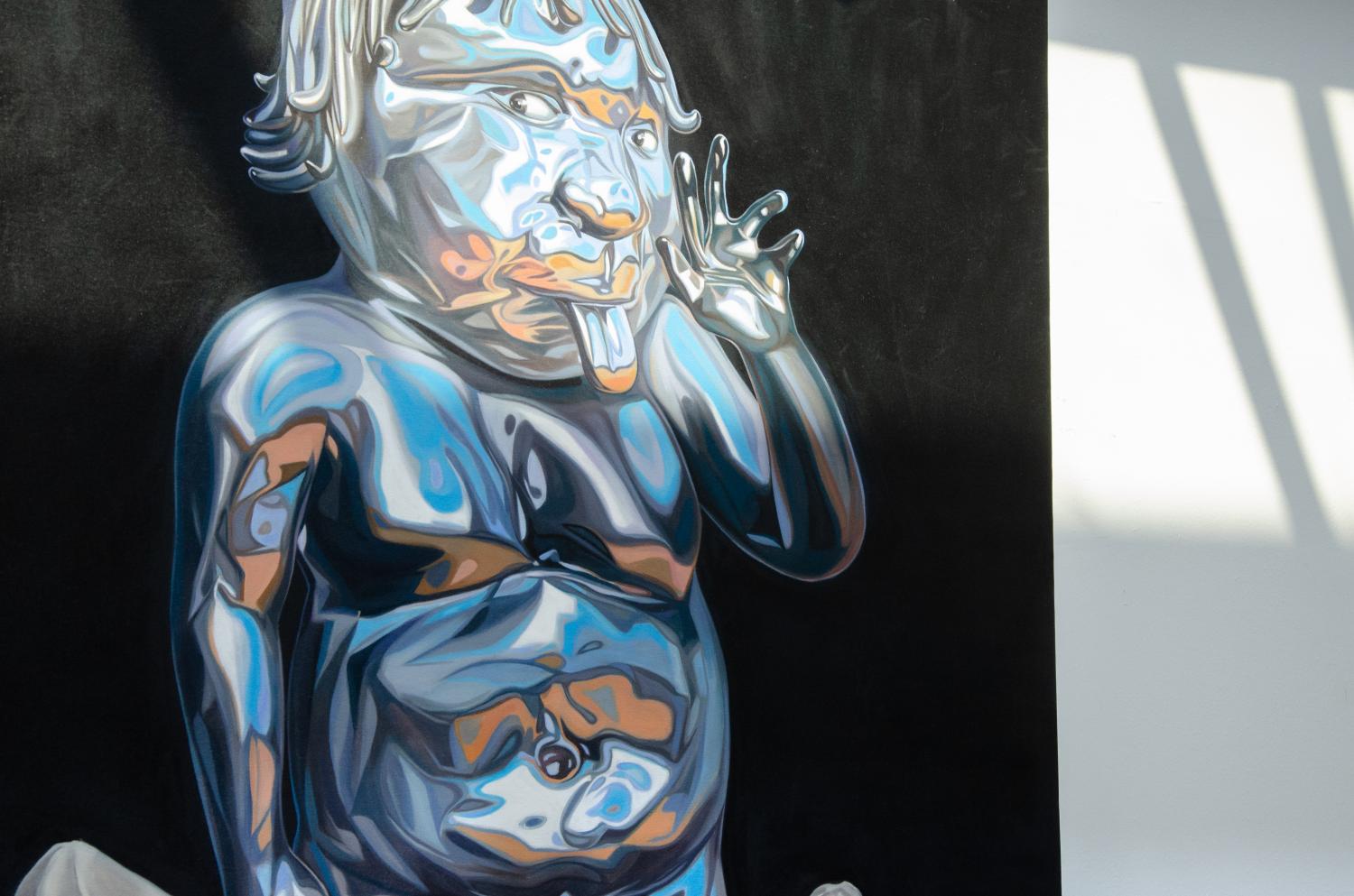 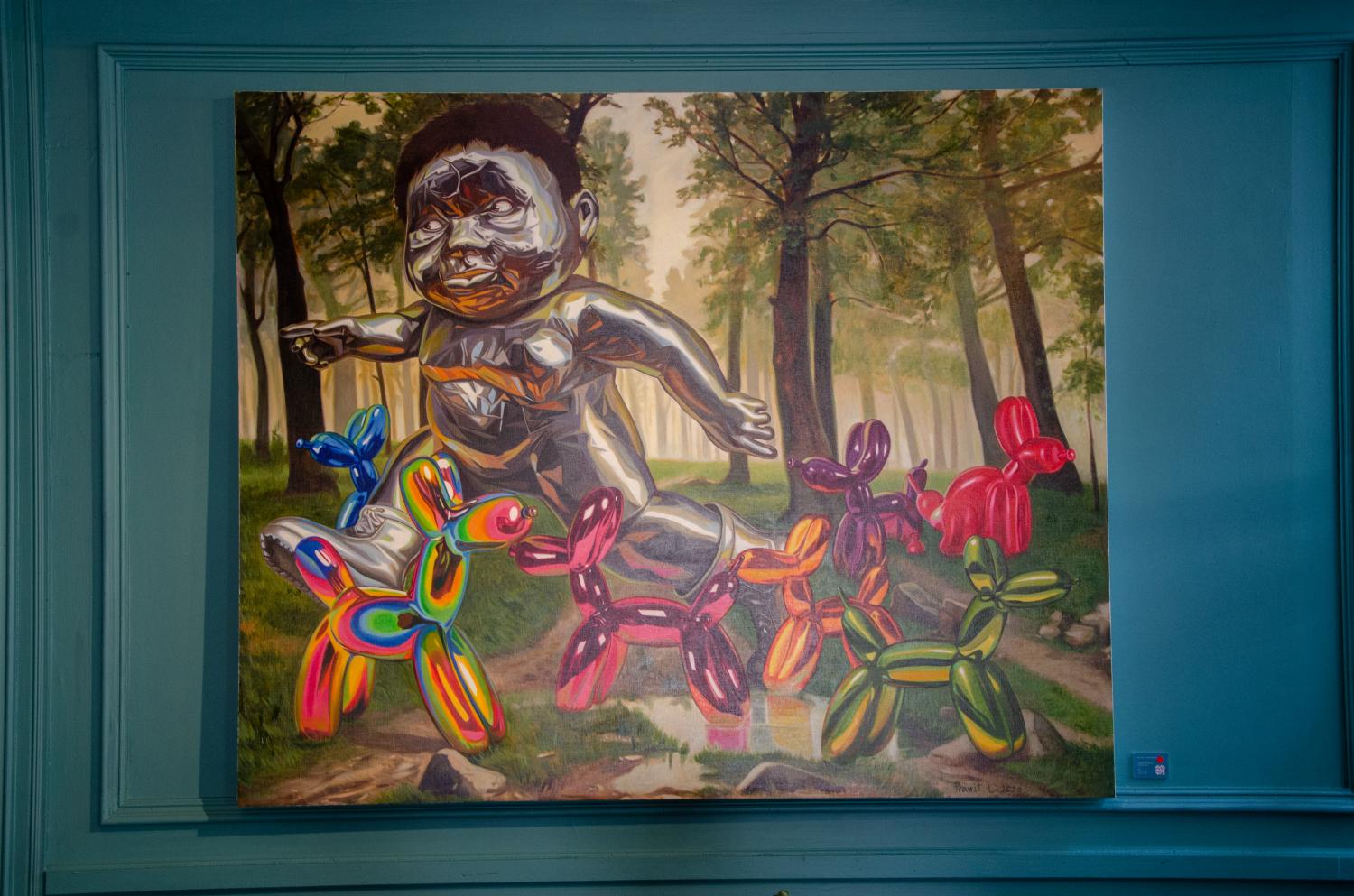 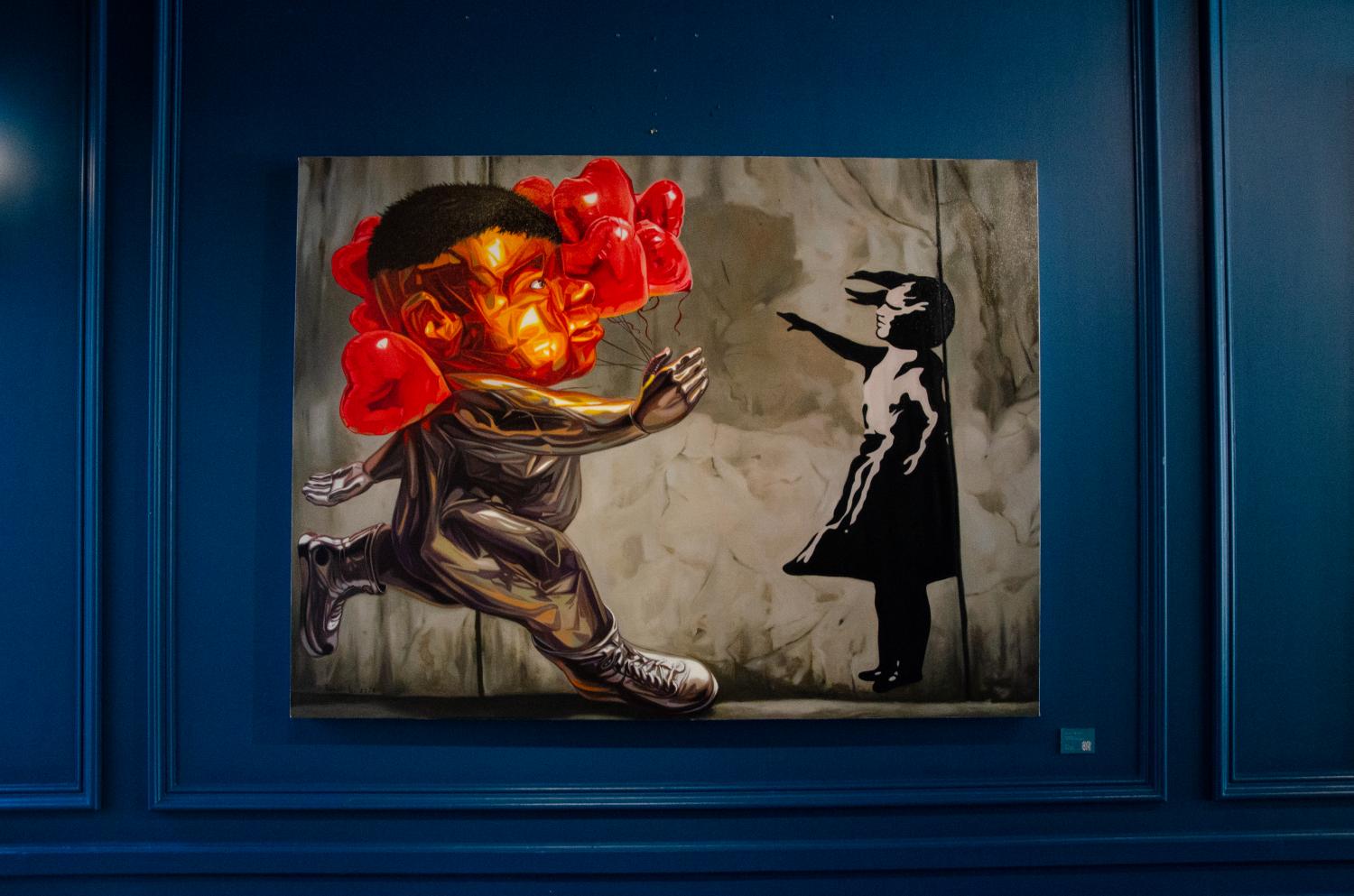 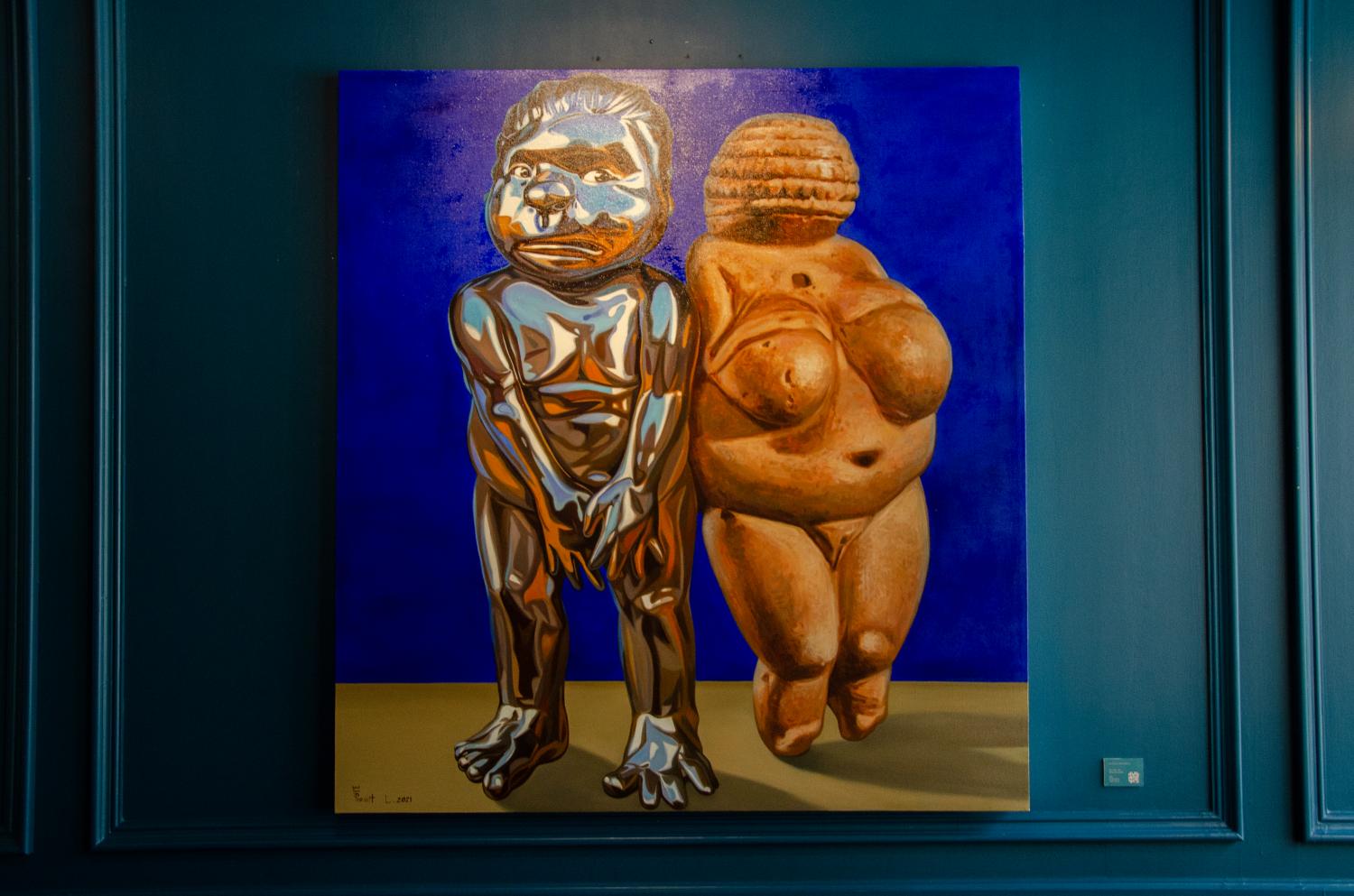 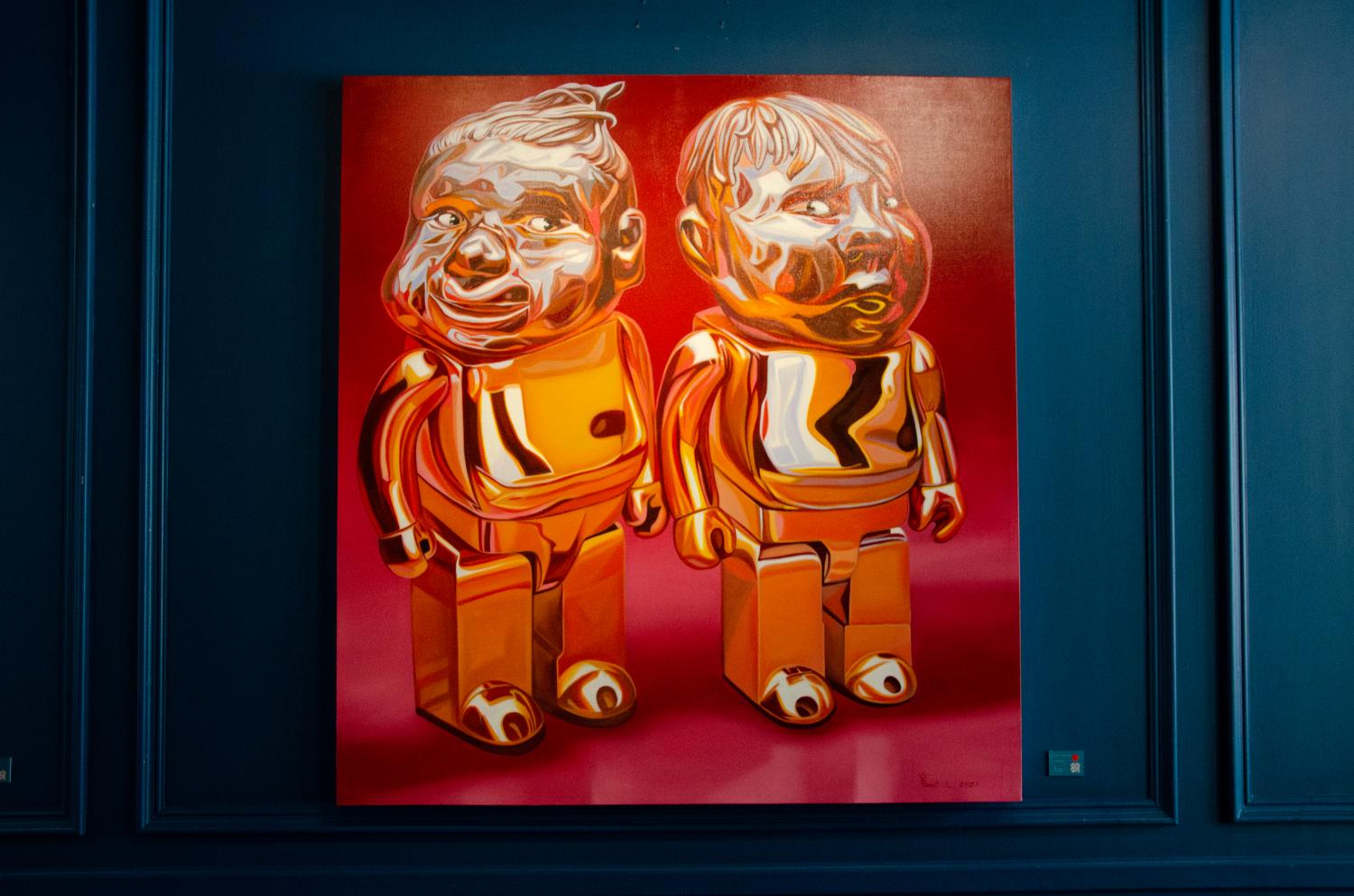 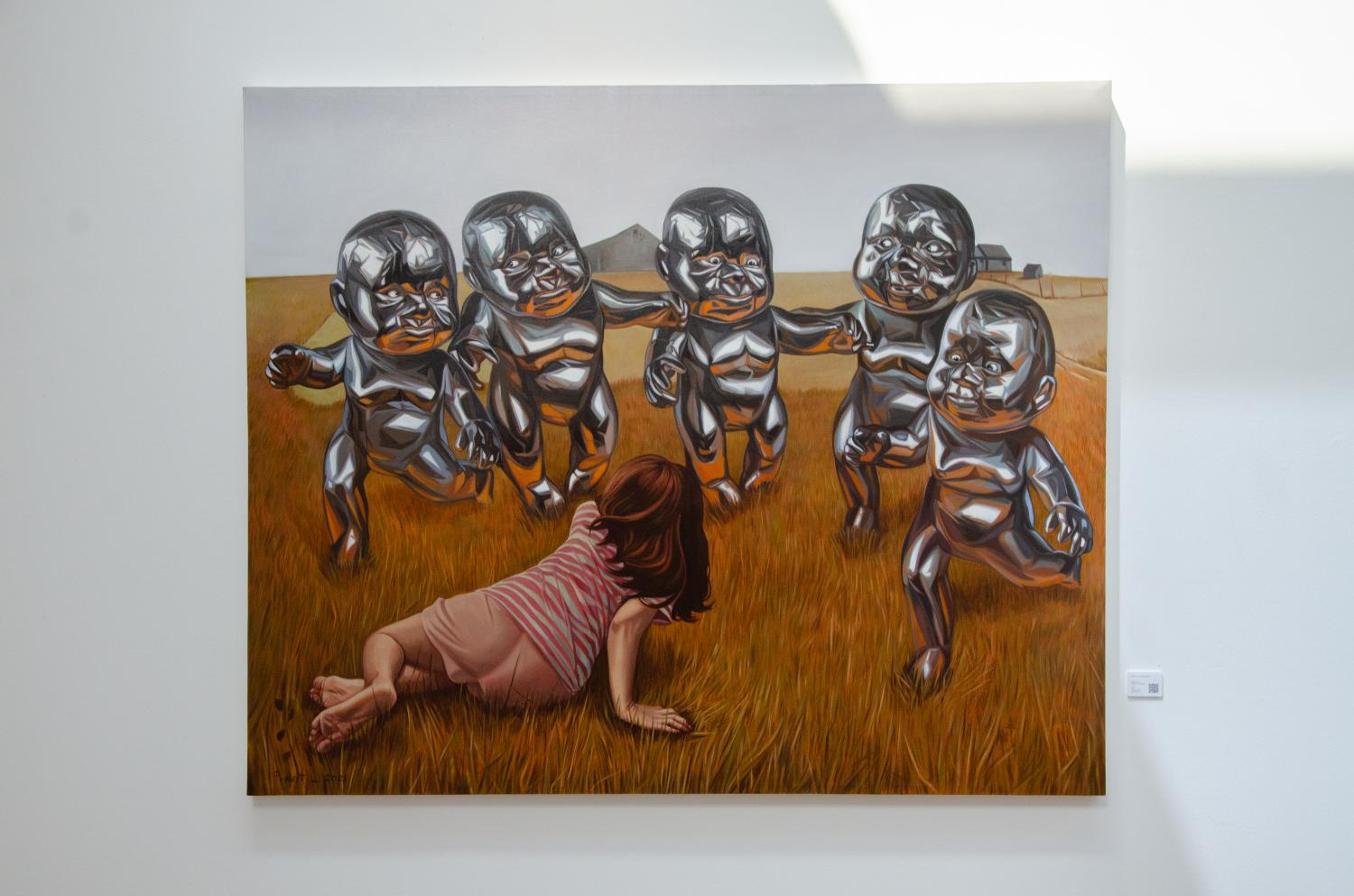 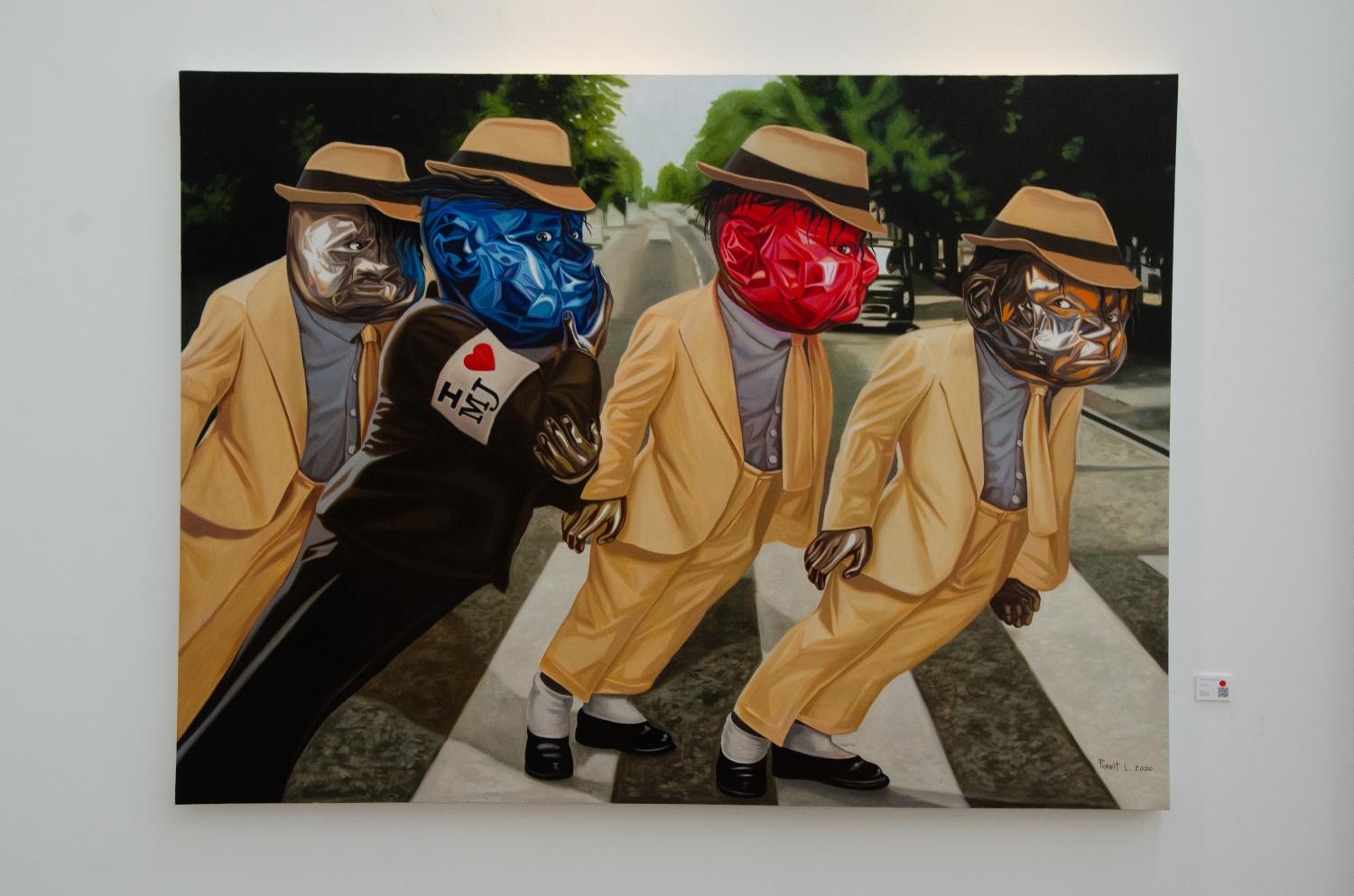 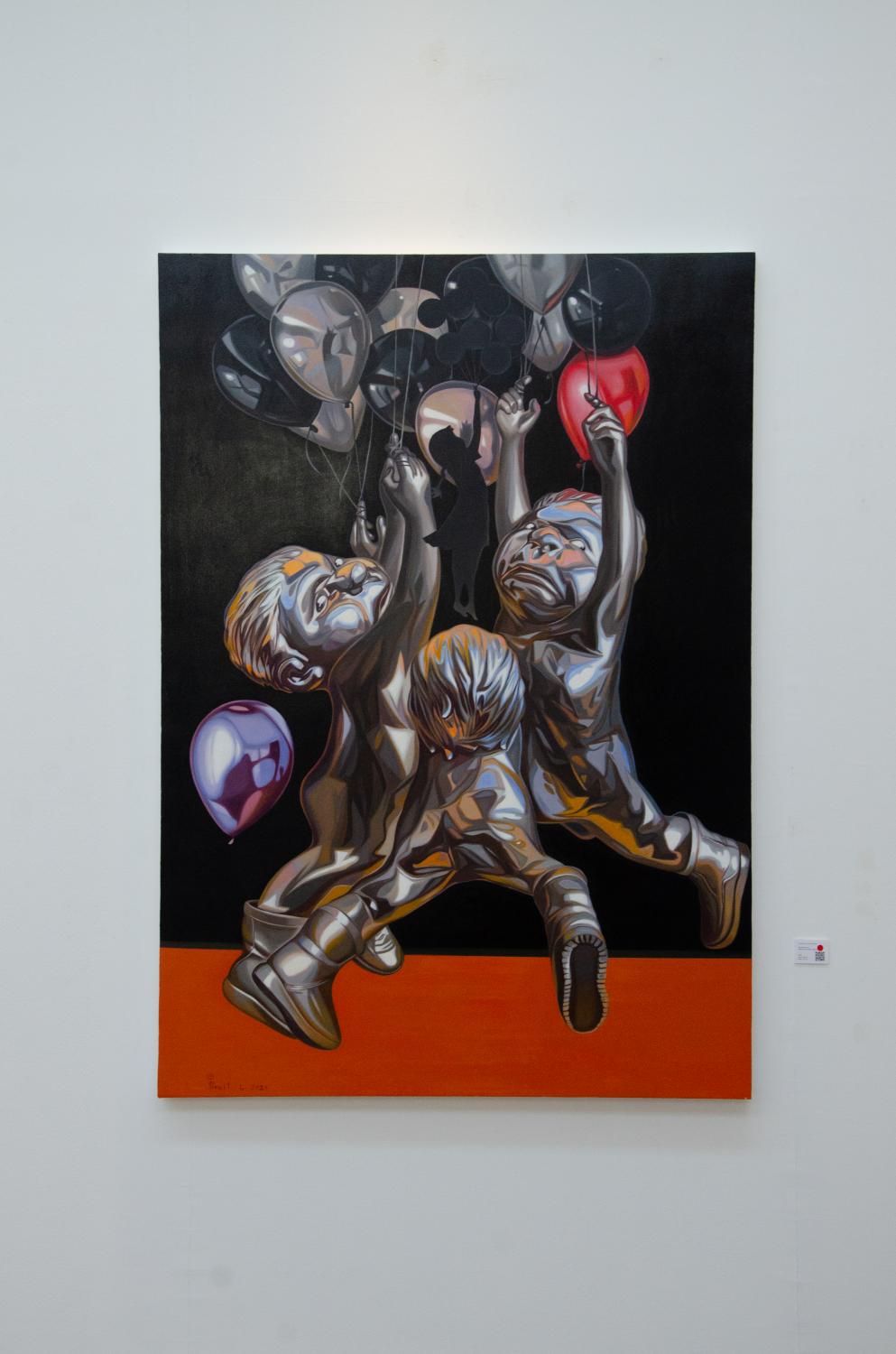 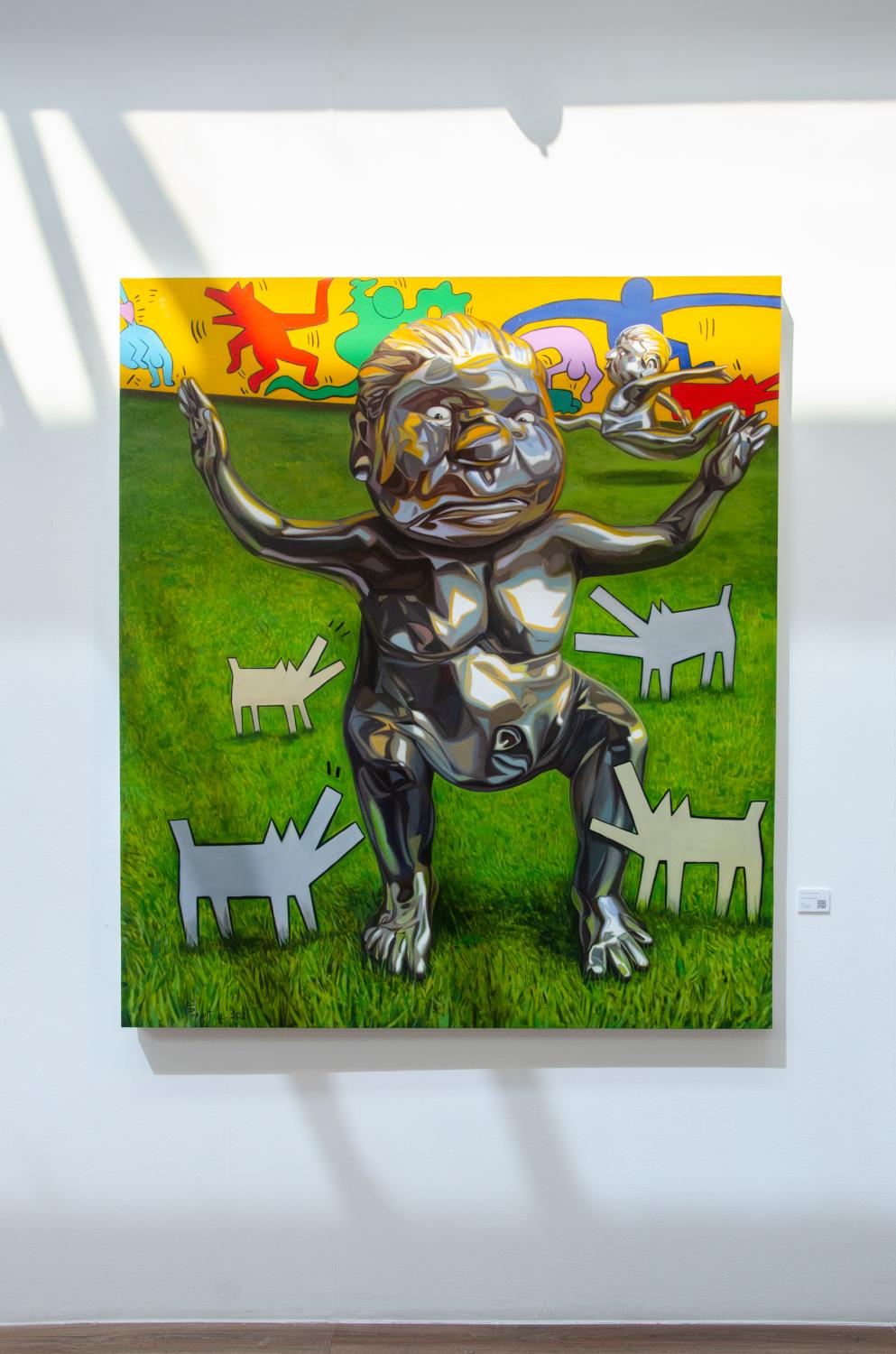