On Feb 1, Ulysse Nardin marked the Lunar New Year with the launch of Blast Moonstruck -- a sequel to earlier astronomical timepieces created by engineer and master watchmaker Ludwig Oechslin.

His academic background further includes receiving a doctorate in philosophy, theoretical physics and astronomy from the University of Bern in 1983.

From that year until 1990, Oechslin developed for Ulysse Nardin, first, the Astrolabium Galileo Galilei and then two other watches for a trilogy that has remained a benchmark in terms of astronomical complications. His studies on monumental astronomical clocks earned him the Prix Gaïa in 1995.

Like all watches incorporating elaborated astronomical information, the Blast Moonstruck serves as a miniaturised extrapolation of formidable turret clocks constructed towards the end of the Middle Ages.

Instead of a Copernican representation of the solar system, its geocentric display is easy to understand, even for people clueless about astronomy. Blast Moonstruck reproduces as faithfully as possible the lunar cycles and the Sun's visible trajectory.

"Why an astronomical watch? Because everything that has regular cycles can be reproduced mechanically and so be read on a dial," said Oechslin. "Encapsulating time is the watchmaker's art. Freeing it is that of the philosopher. In a way, the Blast Moonstruck encapsulates, but above all it liberates the mind. It's that simple."

Founded in 1846, Ulysse Nardin initially developed navigational marine chronometers and complex pocket watches, for an era of ocean exploration and international trade. Based in Le Locle and La Chaux-de-Fonds, the company advances its haute horlogerie through four pillars: Marine, Diver, Blast and Freak.

In 2001, Oechslin also created the Freak -- the very first watch to incorporate silicium into its mechanism. His latest project with the Swiss brand incorporates a worldtimer in Blast's geometrical case sized at 45mm and made of black ceramic and black DLC-treated titanium.

The resulting Blast Moonstruck also poetically portrays the dance between celestial bodies, by tracing the Moon's rotation and lunar cycles, the apparent movement of the Sun around the globe, not to mention the tidal chart. 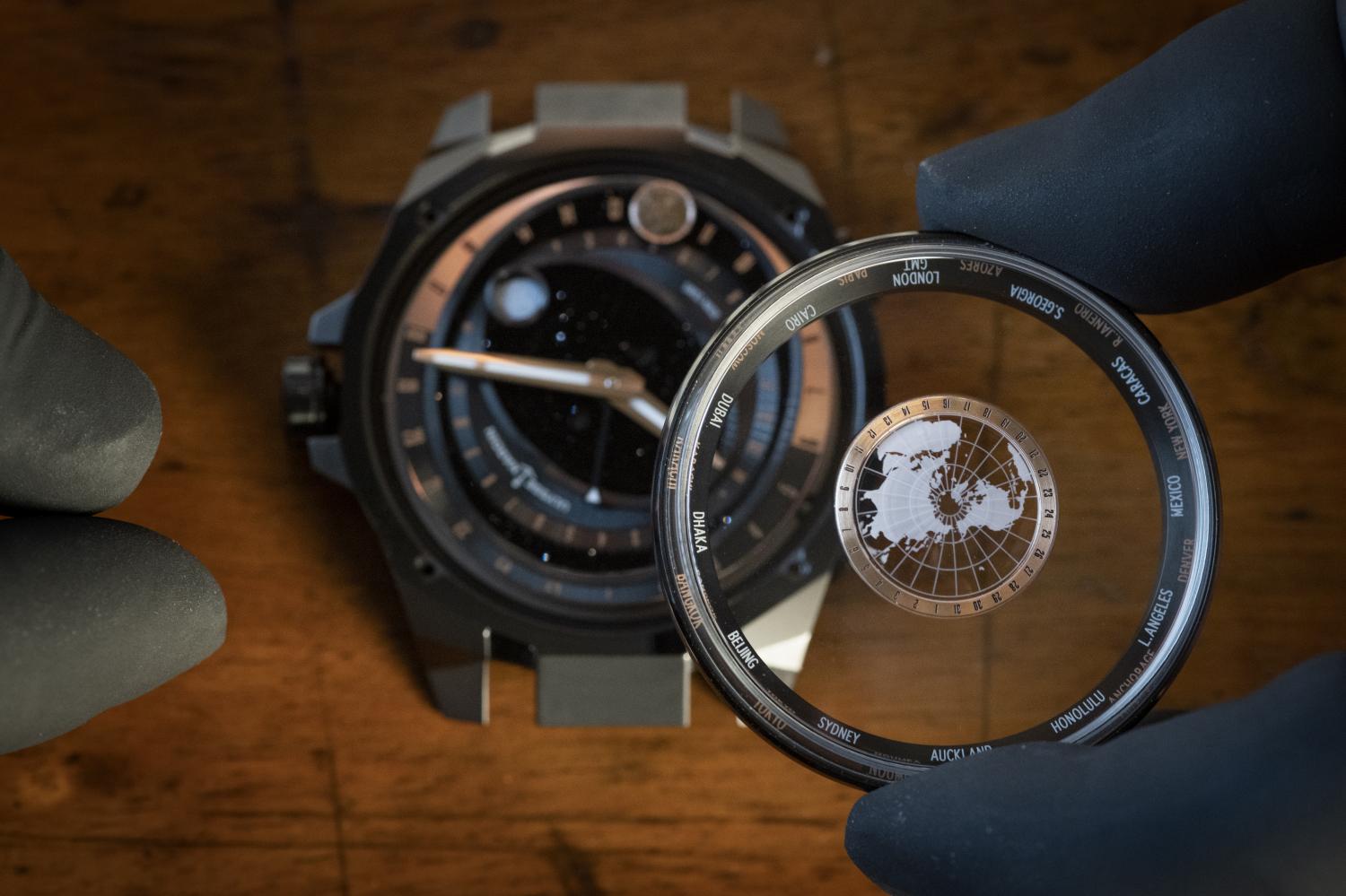 The land masses are micro-engraved on the inside of the domed crystal.

"The Sun has a force that creates and destroys life. The Moon influences the tides but also our nocturnal music and dreams," said Oechslin.

The representation of the Moon phases appear in a round aperture located at the apogee of an ellipse portraying its orbit, which is depicted as being in the same ecliptic plane as Earth for practical reasons.

An elaborate gear train drives the indicator to make one complete rotation per day to follow the course of the Sun, the source of the Moon's brightness.

Its accuracy is conserved by engineering the aperture to retreat every 24 hours on its circle of revolution by an angle corresponding, in degrees, to 1/29.53 of a lunar month to occupy a new position in relation to the Sun. At the same time, the representation of the Moon magically evolves to appear a little brighter or dimmer in line with the lunar calendar. 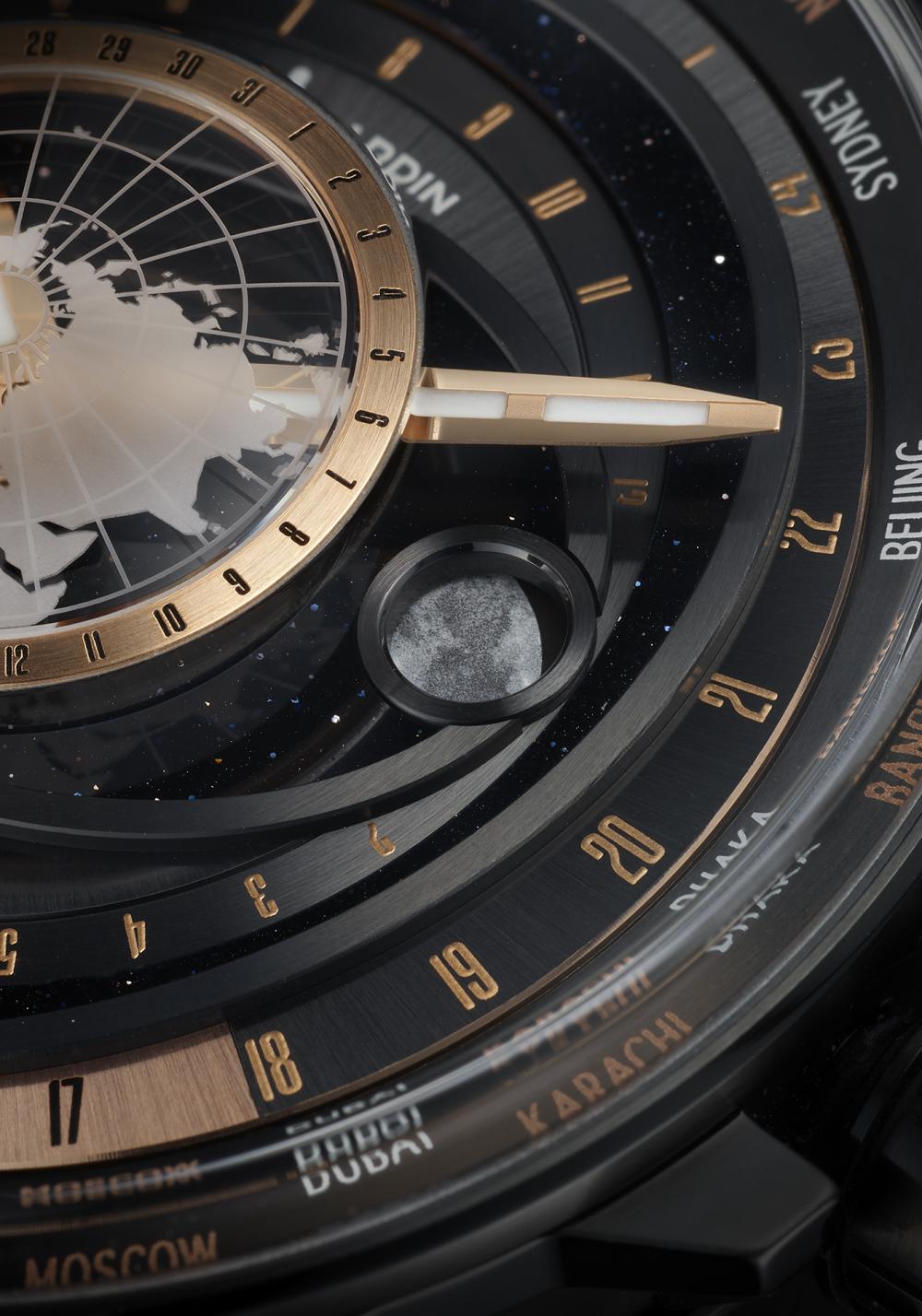 A miniature Moon shimmers in an aperture located at the apogee of an ellipse portraying its orbit.

The moon phase indicator along with the complication allowing real-time tracking of the Sun add relief and life to the dial. From day to day, the dates of the spring tides can be predicted at a glance by observing the Sun and Moon aligning on their respective ellipses.

"What you see in the sky, the course of the Sun: that's something you experience with your senses," said Oechslin. "With the Moonstruck, I wanted to create something that everyone can see in the sky, namely the correct display of the Moon and the correct light guidance. Today I know how it works and can make it myself, and it's still an absolute bomb."

Oechslin together with Ulysse Nardin's designers chose to place the part of the northern hemisphere seen from the North Pole at the centre of the sapphire crystal.

To increase the 3D effect, the domed crystal, with the land masses micro-engraved on the inside, is set in the protective sapphire crystal box encircled by an 18 carat rose gold ring engraved with the 31 days of the month. Loaded with luminescent material, a small triangle serves as a pointer of the date.

The advanced astronomical complication is complemented by the worldtime function, which thanks to its sophisticated mechanism, assures the display of the time in a place chosen from among the 24 principal time zones.

A three-dimensional representation of the Sun on a rotating disk.

The time is displayed against a background of the night sky portrayed by an aventurine disk. Times around the world can be read with the aid of the fixed flange bearing the names of cities and the rotating disk on which a three-dimensional Sun shines at 12 o'clock.

The Dual Time mechanism allows changing of the main display in leaps of full hours with the aid of two pushers located on the left side of the case middle to show the time in a given country on the dial while keeping the initial time alongside the reference city.

As long as the watch is worn, the Manufacture Caliber UN-106 subsequently manages all of the displays on its own. Blast Moonstruck comes in a box with an automatic winder that ensures its precision and accuracy of the calendar information when not resting on the wrist.