Watch what you eat 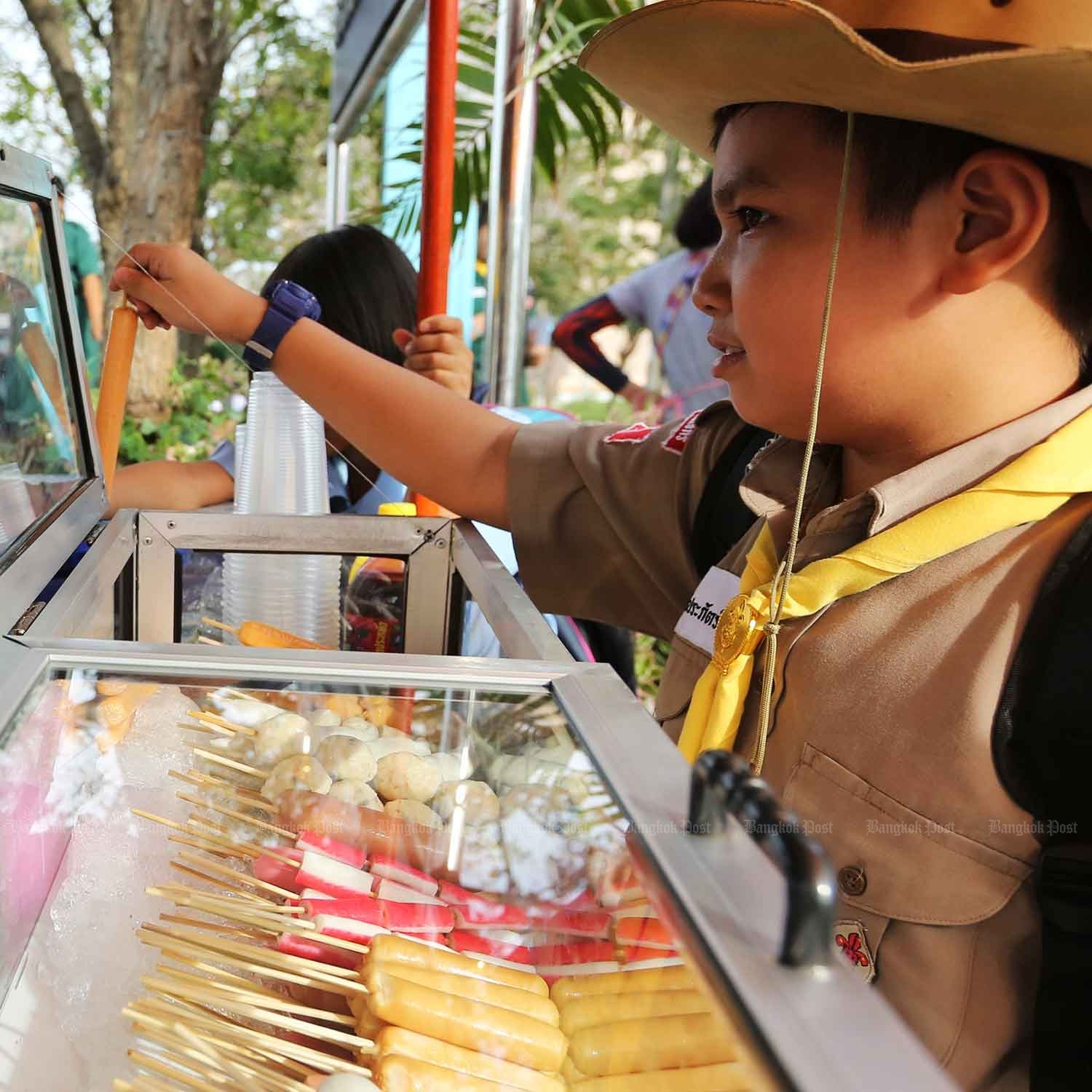 Local healthcare authorities should monitor food sold in public places especially in front of schools where children can be at risk. (Photos: Wichan Charoenkiatpakul)

An investigation traced the source of the problematic sausages to a factory in Chon Buri. The factory -- which also made moo yor (pork sausage) and meatballs -- was found to have no certification from the Food and Drug Administration (FDA) and to have not met the Good Manufacturing Practice (GMP) standard. Law enforcement and the FDA seized 32 substandard products worth over 700,000 baht.

Processed meat products such as sausages, moo yor, naem (fermented pork sausages), kun chiang (Chinese sausages) and meatballs are all-time favourites among many Thais given their convenience, good taste and affordable prices. However, such an incident serves as a wake-up call among consumers with regard to the safety of familiar food they eat.

Last week, the FDA revealed further lab analysis of the seized products. Some of them contained nitrite -- a chemical used for food preservation -- 35 to 48 times above the maximum contaminant level allowed by the law. The raid at the Chon Buri factory also led to other investigations at processed meat plants in many other provinces including Saraburi, Uthai Thani and Ayutthaya, while random examination will soon be carried out at 66 locations across the country.

Asst Prof Wenika Benjapong of Mahidol University's Institute of Nutrition said that the use of chemical food preservatives, namely nitrate and nitrite, is allowed in Thailand but in limited quantities as stated in the notification of the Ministry of Public Health (No. 281 and 418) concerning food additives. These chemicals are usually used by food manufacturers to preserve the texture, taste, smell and colour of processed meat. Nitrate and nitrite are also used to prevent the proliferation of bacteria Clostridium botulinum, which grows well in zero-oxygen conditions and is thus able to extend the shelf life of processed meat products especially canned, vacuum-packed or cured meat.

"The stipulation with regard to how much nitrate and nitrite is allowed to be used varies according to different products," said Wenika. "For processed meat like sausages, bacon, ham, naem and kun chiang, a maximum of 80mg of nitrite is allowed per one kilo of meat. As for nitrate, the maximum limit is capped at 150 to 200mg per one kilo of meat." The Joint FAO/WHO Expert Committee on Food Additives has set the acceptable daily intake (ADI) of nitrate and nitrite at no more than 3.7mg and 0.07mg respectively per one kilo of body weight. In general circumstances, the body has a natural mechanism to get rid of the chemicals. Nonetheless, nitrate and nitrite intake that is more than the ADI threshold can be detrimental to health, Wenika said. The severity depends on the amount of chemical intake and the frequency in which the foods are consumed.

"Nitrite and nitrate can transform haemoglobin into methemoglobin, which affects the ability to transport oxygen. This can result in a condition called methaemoglobinemia where inadequate oxygen is delivered to cells. Symptoms include fatigue, shortness of breath, headaches and bounding pulse. Excessive consumption of both chemicals can be fatal especially in small children," she explained.

Nitrite also can react to compounds in the meat called amines. Together they form nitrosamine which, according to the World Health Organization's International Agency for Research on Cancer classification, is categorised as possibly carcinogenic to humans. Certain cooking processes especially grilling and frying can potentially make meat even more carcinogenic.

Manufacturers of processed meat products that fail to keep their hygienic standards are most likely to end up using food preserving chemicals way beyond the maximum limit, Wenika added.

"When the places, environment, people and containers are not clean, there is a high likelihood of food contamination. And to prevent products from spoiling faster, manufacturers tend to add even more nitrate and nitrite which can be harmful to consumers."

To ensure food safety, the government's efforts alone might not be enough, Wenika said. All parties involved including food manufacturers, the private sector, local healthcare authorities, even schools, parents and consumers in general must make sure food is safe to eat.

While the FDA is doing their job in certifying, monitoring and randomly examining products, food manufacturers must be equipped with correct knowledge and understanding of how to use chemical food additives only as necessary and ensure the manufacturing process is hygienic.

At the same time, local authorities should have food and nutritional experts on their team and should play a pivotal role in overseeing food available in public places especially street food.

"Think sausages sold in front of schools," said Wenika. "If they are of poor quality, children are all at risk. And when the little ones buy these sausages, they do not think through. So adults need to step in. Local authorities can start by checking if, say, sausages sold in front of schools are certified by the FDA. The schools themselves must ensure products sold inside their premises are FDA-certified and are of good quality.

"While school operators take care of food inside the academic institutes, parents should pay attention to food brought into the family. Processed meat products are convenient but it is not a good idea to stock them all the time. Meanwhile, people who operate or own fresh markets and supermarkets should do more than just receive monthly rental fees. They should also check and monitor products available inside their areas if they are up to standard."

Finally, Wenika strongly believes that consumers are the ones to dictate how food is manufactured. They should therefore eat and decide wisely for the sake of their own health.

"Eating a wide variety of food is one way to prevent an excessive intake of hazardous chemicals. After all, everything comes with risks, some bigger than others. So in the end it is up to consumers to learn, understand and decide to take or not to take those risks," Wenika said.