Transgender beauty queen's immigration trouble in Dubai is yet another reminder of how Thai law has failed. 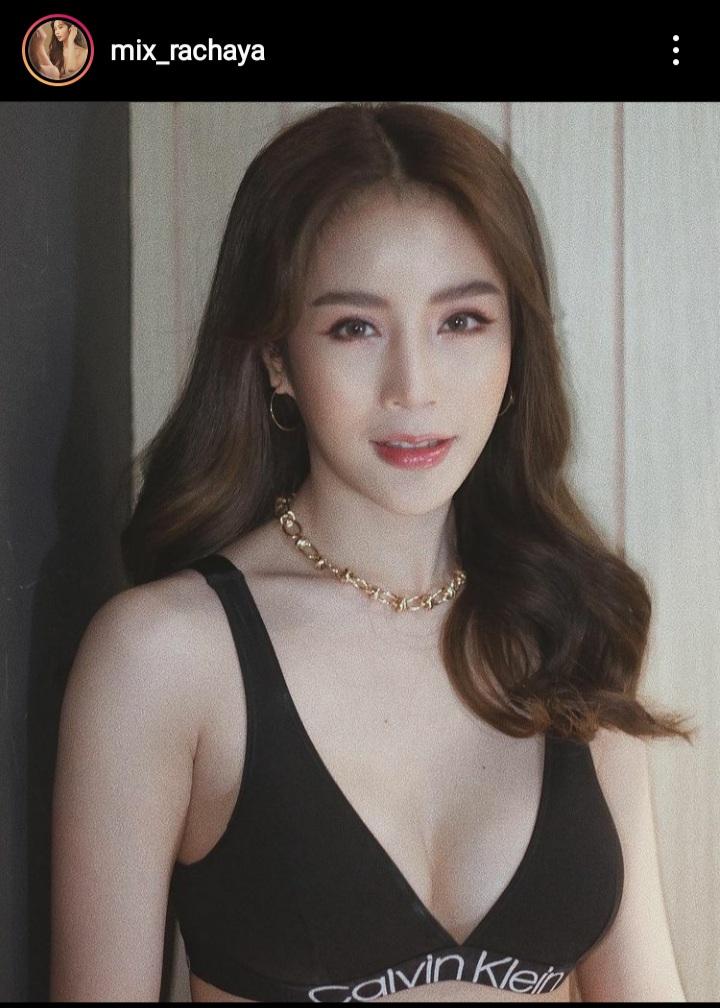 Earlier this month, Rachaya "Mix" Noppakaroon -- Miss Tiffany's Universe 2014 runner-up -- was barred from entering Dubai where she was slated to perform at the Expo 2020 event. Upon her arrival, immigration denied her entry and she was eventually sent back to Thailand. As a Thai transgender woman, her passport, documents and title remain as "Mister" -- her sex at birth -- while her appearance clearly suggests otherwise. This situation has long posed complications for transwomen, both in daily situations and when they go abroad. To cross the border, they must carry tons of documents to prove their gender identity, and even doing so they are always met with scrutiny. Invasive questions and prejudice are just an inescapable constant in their life.

When Rachaya recounted her experience on Facebook, she said she was angry at the treatment she received in Dubai, although she didn't blame the staff there. The blame, to her, was all on Thai law since Thai transgenders are still unable to change their gender or title legally. Some netizens commented that she should've known better that she was entering a Muslim country, which isn't really open to LGBTI people in general, instead of blaming the law. Some went as far as suggesting she should just pass as a man, donning a disguise for a day just to get through. But is that really a way to solve the problem? Must people hide who they are and retreat back into the closet in order to get by?

Advocating for legally changing one's title according to their gender identity has, unfortunately, never really been met with enthusiasm here. From discrimination to loss of opportunities, Rachaya's case is one among countless situations that transgender people have been facing and will continue to face should the law remain unchanged. 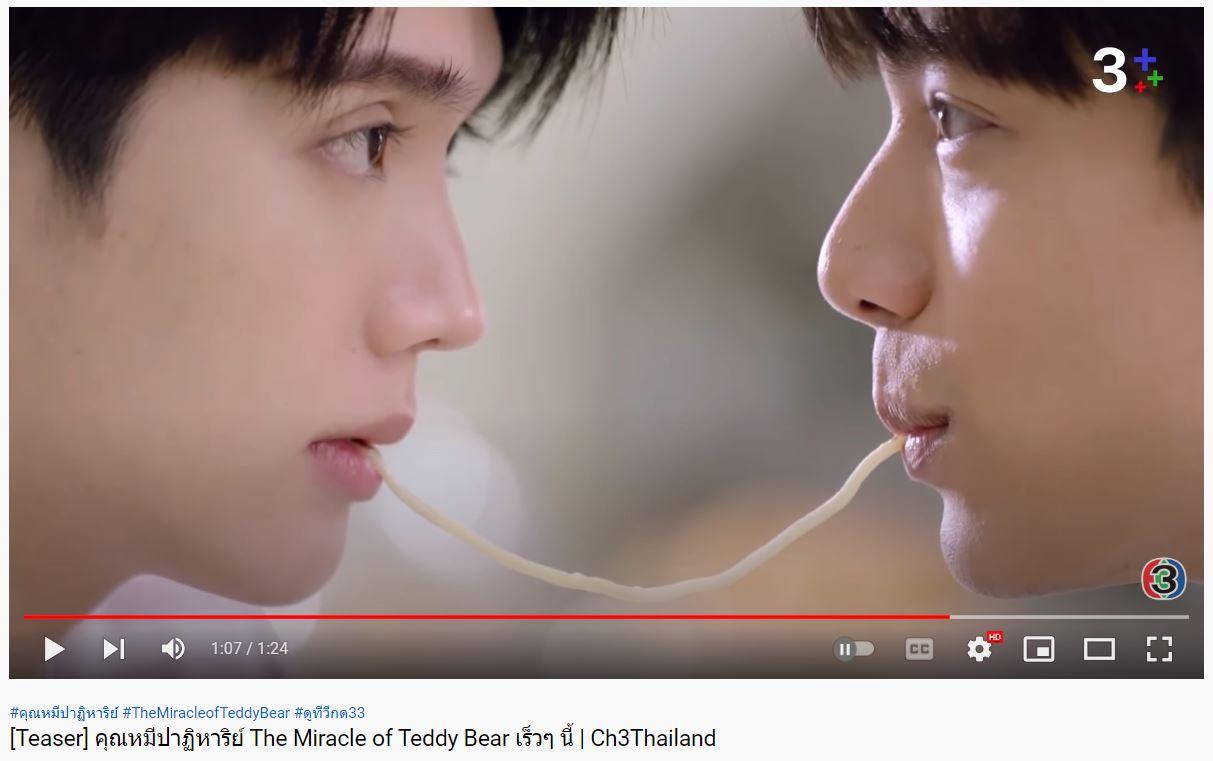 Miracle Of The Teddy Bear is the first Boys' Love series by Channel 3. Photo: youtube.com

The introduction of yet another Boys' Love (BL) series into the Thai market should be nothing new. After all, the market segment for these series has grown considerably over the past few years. Why, then, are people making a fuss about the Miracle Of The Teddy Bear?

Released yesterday, this new drama is the first BL series to be broadcasted on Channel 3 -- the big "free TV" channel that has long been a fixture of home entertainment for Thais over the past few decades. Additionally, the series has also made its way onto the prime-time slot -- the evening time slot from Fridays to Sundays. Audiences and fans of the genre have long anticipated the series as it marks the first time Channel 3 has dabbled in this genre that has pulled traffic to digital TV channels and streaming platforms. And while many may perceive Channel 3 as more conservative, they clearly don't shy away from romantic scenes and kisses between two male leads, as apparent in the drama's teaser.

The series is about a teddy bear that, one day, turns into a human. In his human form, the bear gets closer to his owner while mysteries that surround the owner's family and bear's miraculous transition unfold. Since the teaser was released, it has been quickly embraced by fans, and equally quickly (if not quicker) criticised by "concerned" (well, homophobic) parents who reasoned that the time slot the series is in means many children are still watching TV. And this exposure, according to their most logical reasoning, will make kids gay.

What leads them to think this particular TV series is the only source of exposure to BL content young people have is beyond me. And whether or not kids choose to watch it, this won't make them gay, in the same way that consuming and growing up with straight content can't make gay people straight. It remains to be seen how audiences will receive this series in the long run and if there'll be further opposition to it. If anything, Channel 3's move in embracing this genre is sending a signal to showbiz and we may potentially see a surge of BL content in the future. However, I wouldn't go so far as to say it's any indication that our society is becoming more accepting of same-sex relationships because, more often than not, it's just about investors recognising business potential and nothing more. 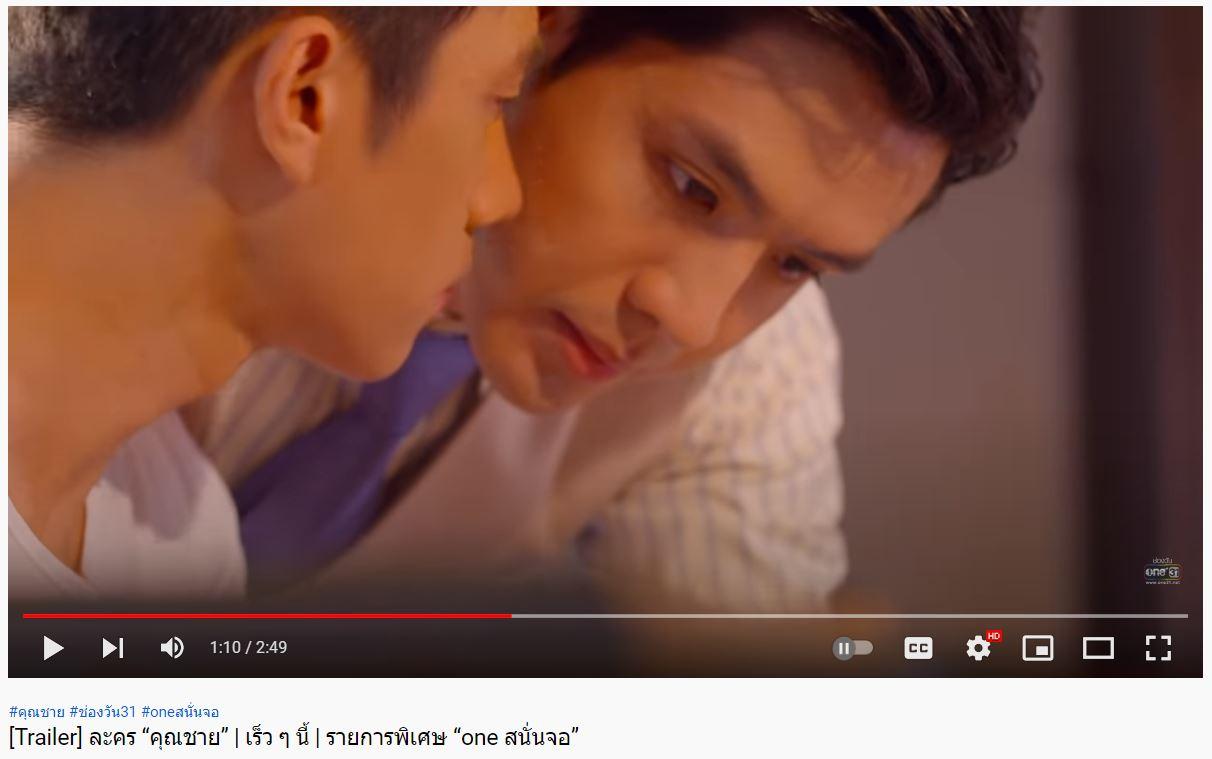 And as for the "nothing more" case mentioned above, let's turn to Khun Chai as a case in point. It's a new TV series on Channel One 31 that promotes itself as a forbidden period love story in Chinese-Thai households. To the horror of his family, the son who's expected to inherit his family's legacy is actually effeminate and likes another guy. Played by straight actors, the series looks to be yet another tear-jerking drama about the struggle of LGBTI people.

Recently, cast members of the series appeared on a TV show to promote their work and attracted much criticism from the public. One was directed at the show's hosts whose reaction to the trailer was so over the top, as if the existence of gay people is so abnormal. Secondly, the criticism was directed at cast members themselves when they began acting stereotypically effeminate when referring to the role of a gay man or when one actor pretended to get romantically close to another and the other acted scared.

When this clip was released online, it drew angry criticism from the public for the cast's lack of respect and understanding of the population group they take this story from. Since BL content has begun to flourish, there has already been criticism about how it serves merely as a space for straight actors to cash in while remaining ignorant to the struggles gay and gender non-conforming people face. We hope they can prove us wrong, although we won't hold our breath for it. 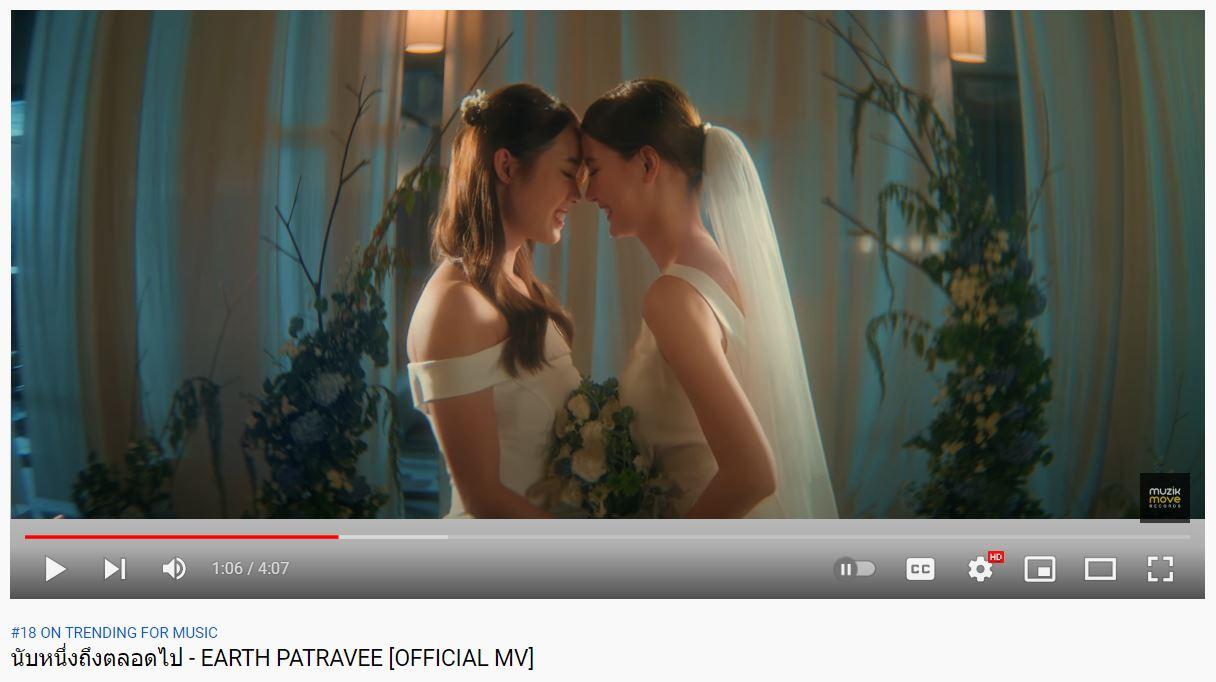 Take a break and listen to Nub Nueng Thueng Talod Pai (Counting One To Forever) -- a new song by Earth Patravee that comes with a music video depicting two women getting married.

There was no drama, which was new. It's just two women embracing each other lovingly, surrounded by plenty of flowers, and exchanging rings to a love song. It was just a couple being in love with no conflict, and really it's not the easiest thing to find in the sea of sapphic content that tends to end in heartbreak and/or death. This change was very welcome.

But then there was nothing else at all. There was no one else in the music video. It was like the happy couple were locked in a world where only they and their love exist. A dreamy imagination with no friends and family in sight. And in that interpretation, the story suddenly turns bittersweet and it speaks volumes about how lesbian relationships are still not widely accepted.

Have you watched it? What's your take on this music video?