At 'Bangkok Model Railway 2022', hobbyists share their creations and the journey of the pastime in the country

At the exhibition "Bangkok Model Railway 2022", train enthusiasts can enjoy model trains from different countries, such as the high-speed Amtrak Acela from the United States, a diesel locomotive from the Deutsche Reichsbahn in Germany, and a diesel-electric from Alsthom in France. These trains run on landscapes that include railway stations, cities, bridges and tunnels. Some railway stations are miniature replicas of real places such as Hua Hin and Baden–Baden in Germany.

Sujin Keuysuwan, a member of the Model Railway Club, said the purpose of the exhibition was to introduce the hobby to the public.

"Many people have never experienced model railroading before. Model trains are built to accurate scale and run exactly like real trains, so people are excited to see them. This is a hobby and is not child's play since the accessories are delicate, which makes it unsuitable for children," said Sujin.

"In the middle of the room, there are five railway lines. I asked other collectors to bring their international trains to run on them. On weekends, we release five trains at the same time and give visitors information about each one, such as its country origin, type and route. The exhibition is informative."

One of the exhibition highlights is a 6-metre by 2.1m model created by Sujin. The modeller said he created this railway specifically for the exhibition.

"I usually build models to order for clients, but this one does not have an owner. I wanted to showcase a curved wooden bridge because I have never seen any Thai modeller build one before. The bridge was difficult to build since I had to make a curve in the wood and glue it layer by layer. I had to ensure the model had a strong base and secure pole bridges. Also, I had to test if the trains could run smoothly on the tracks. It took me a month to finish," said Sujin. 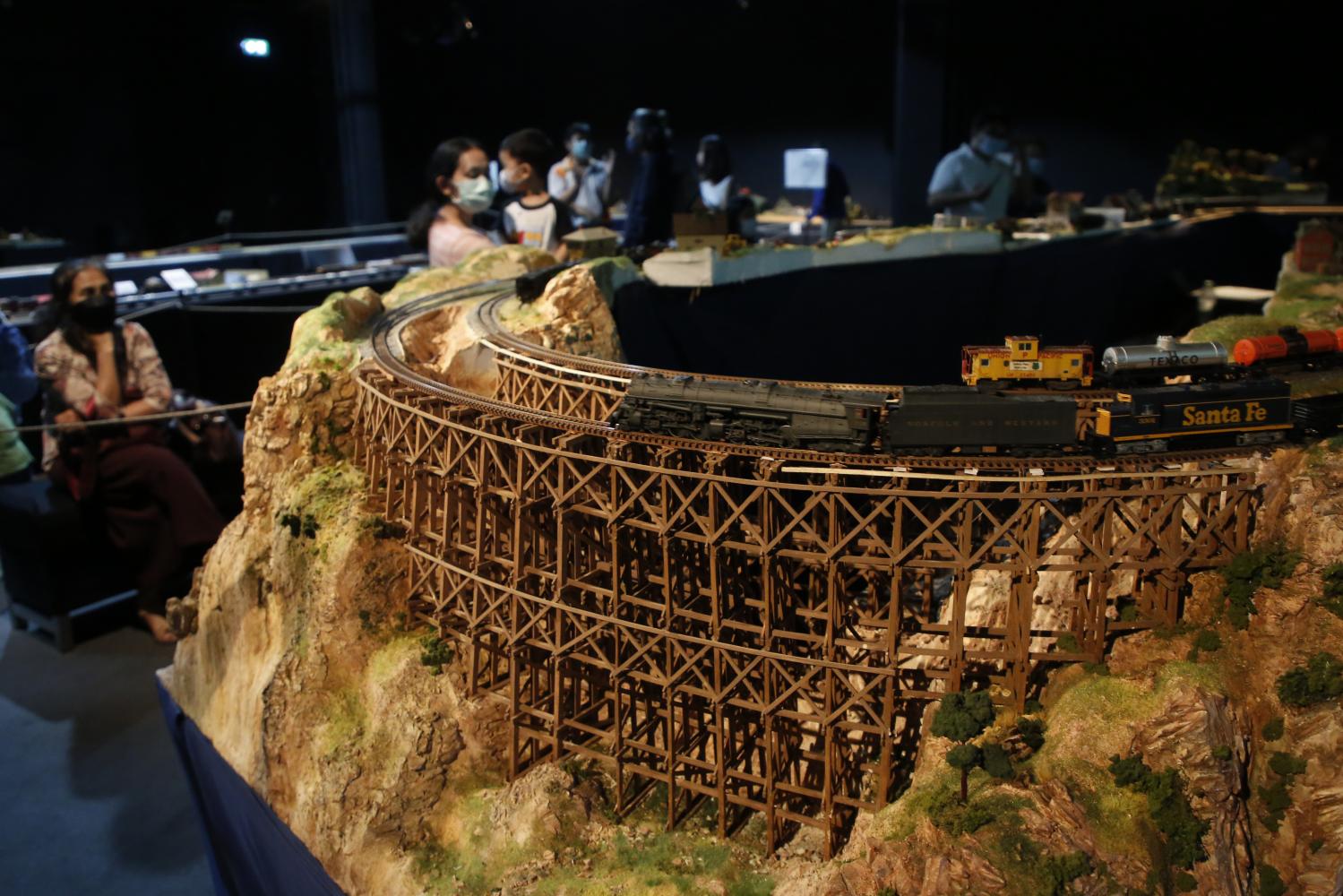 One of the exhibition highlights is a curved wooden bridge built by Sujin.

Growing up with his father who worked at the State Railway of Thailand, Sujin enjoyed following him to stations and watching trains as well as travelling on them. At the age of five, Sujin was thrilled to see model railways at Central Chidlom for the first time.

"I was excited to see model trains running. They looked just like real trains. Over 40 years ago, one model train cost 100 to 200 baht, which I could not afford. But when I was a junior high school student, I purchased my first model train and track for 170 baht with money I earned from a part-time job. It was an Italian train. However, model trains in the past were not elaborate, but I was happy with the one I had," he said.

Central Chidlom had stopped selling model trains by the early 90s, to the dismay of enthusiasts. Sujin and other collectors had to order trains from Austria which took about three months to arrive. So when a store called Train for Thai opened in Phutthamonthon around 2006 or 2007, Sujin did not hesitate to visit. This place was the beginning of his love for American model trains and his career in making model railways.

"At Central Chidlom, there were European models, but Train for Thai imported trains from the US. They brought affordable models to Thailand. A starter set had one locomotive, a couple of containers and one track. At that time, it cost 500 baht while European versions cost 1,200 baht. As a result, I started collecting American models, but I focused on trains from the 1930s to 1970s. These trains are classic, featuring diesel-hydraulic and steam locomotives," Sujin said. 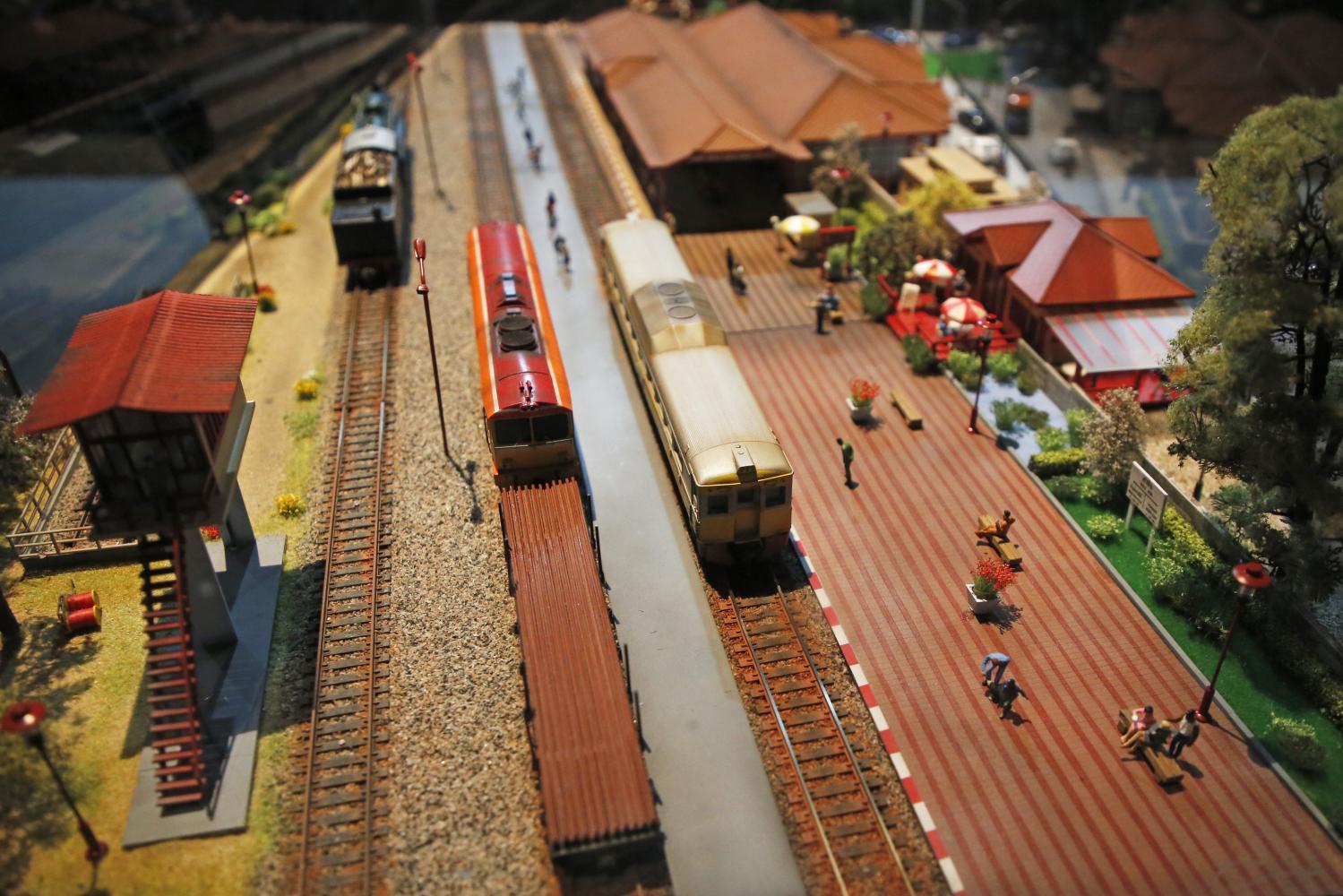 "Train for Thai was a hangout place for collectors. At one point, several of us decided to build a small railroad layout there. Thirteen years ago, no one knew the techniques of building layouts. Some collectors read tips in English magazines and told us what to do. I graduated from Pohchang Academy of Arts and worked in commercial design at a printing house, so I had artistic skills. The layout was adequate and is still on display at Train for Thai's showroom," he said.

His second model layout was for the BTS.

"BTS officials came to Train for Thai because they wanted someone to create model railroads. During the early years of the BTS, they did not have a simulator that replicated the driving desk. They needed model railroads of main stations such as Mochit, Ari, Phrom Phong and Saphan Taksin. A 14m model railroad helped BTS drivers learn routes, directions, switching and splitting tracks and the signal system," he explained.

Currently, Sujin owns over 30 locomotive models and 300 containers. He quit his job at the printing house and became a full-time modeller. He said that in Thailand, there are less than 10 modellers. The price of a layout designed by Sujin starts from 50,000 baht, but at this price, there are not many details and it features only two tracks. Sujin must know how many and what type of tracks his client requires before he designs a layout. "Since most clients own American model trains, I design landscapes inspired by scenery in the US. Many American trains run through the desert, but Thai clients do not like desert landscapes. One client told me that he did not want dry landscapes, so I had to add more grass to the layout. Some clients own both American and European trains and did not mind putting them together. I put both American and European houses and settings in the same layout, but I tried to make other things such as trees, streets and hills look realistic," he said.

Asked what are the benefits of collecting model trains, Sujin said: "Some people envy me and say I am lucky because my work is like playing with toys. Many people understand that I work on what I love and what makes me happy. In the future, I would like to create a model layout of Thon Buri Railway Station because I have childhood memories of it. I took many photos of the station, but my layout will not be exactly the same as the real station since it requires a lot of time and money. I will work on it when I am ready."

"Bangkok Model Railway 2022" is running at TCDC's Gallery Room on the 1st floor and ends today. Admission is free. For more information, visit facebook.com/tcdc.thailand and facebook.com/sujin.keuysuwan. 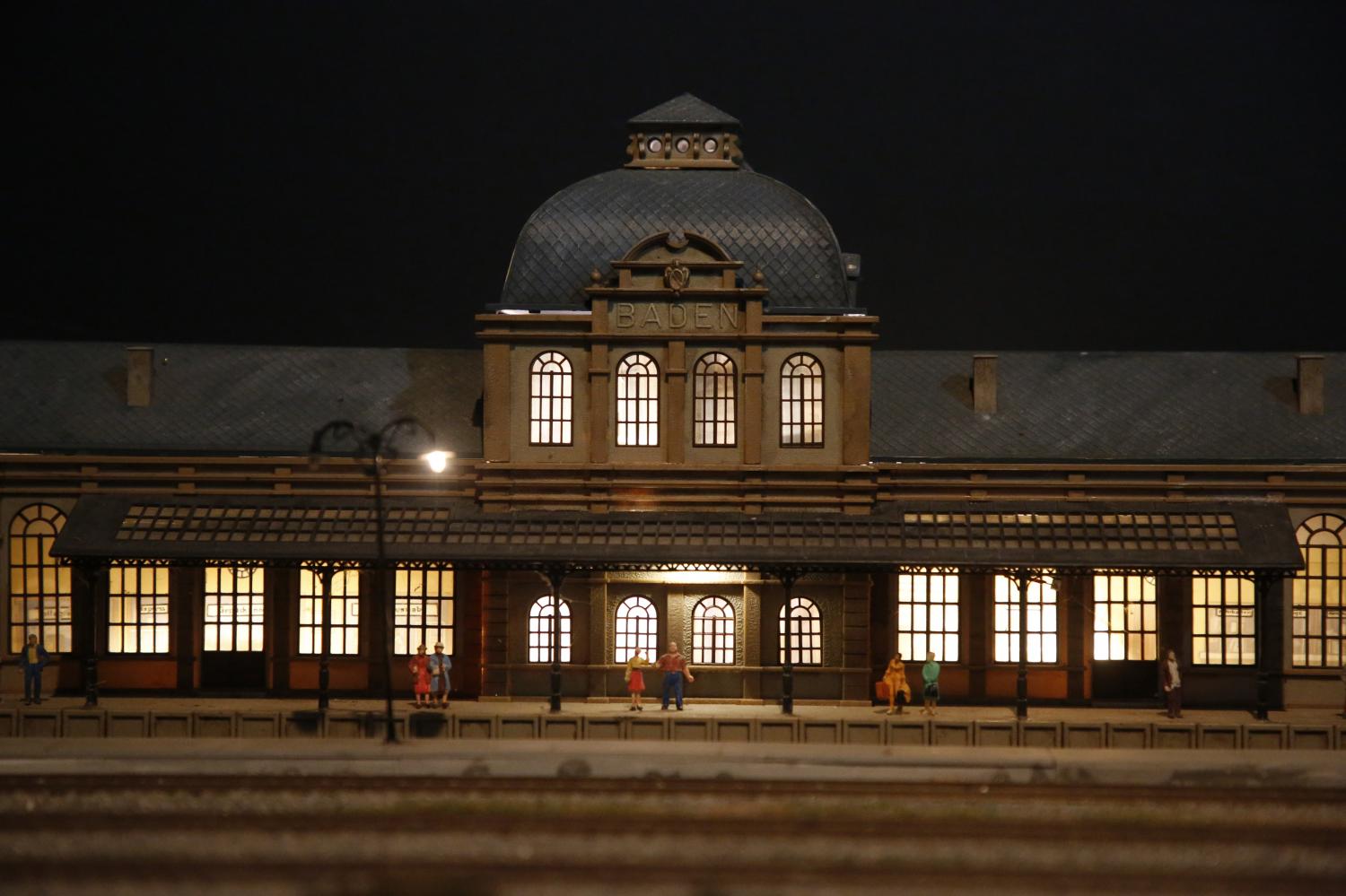 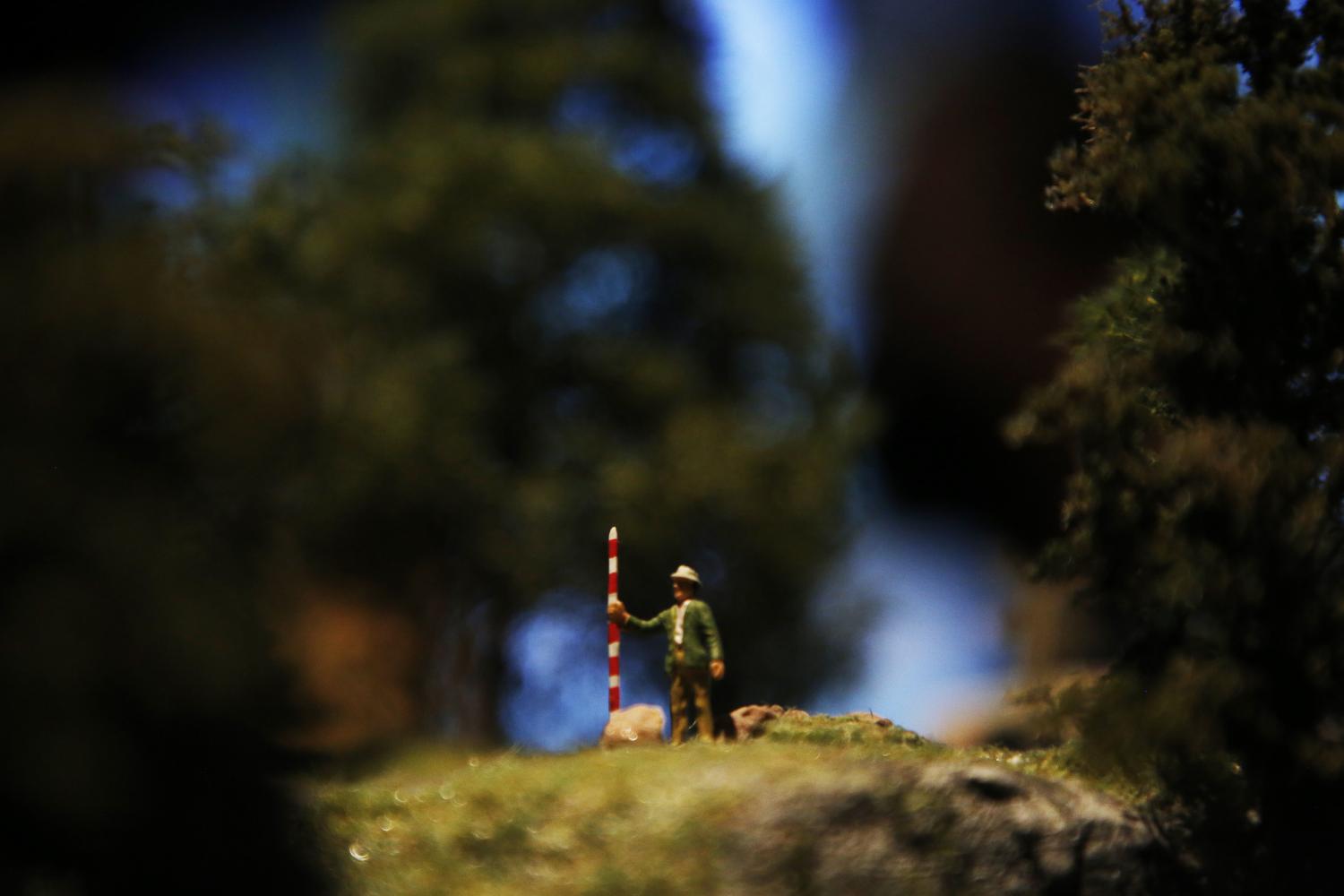 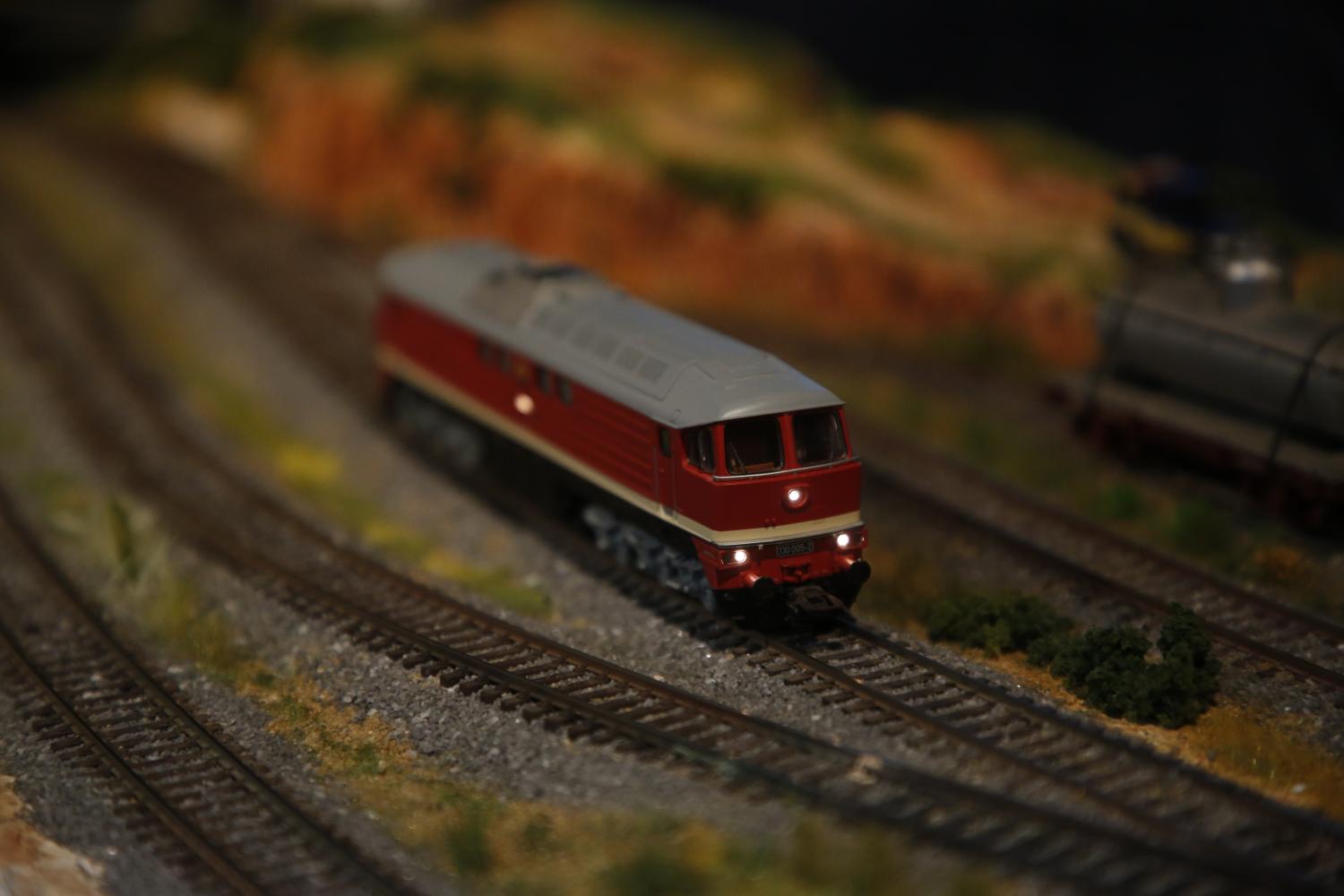 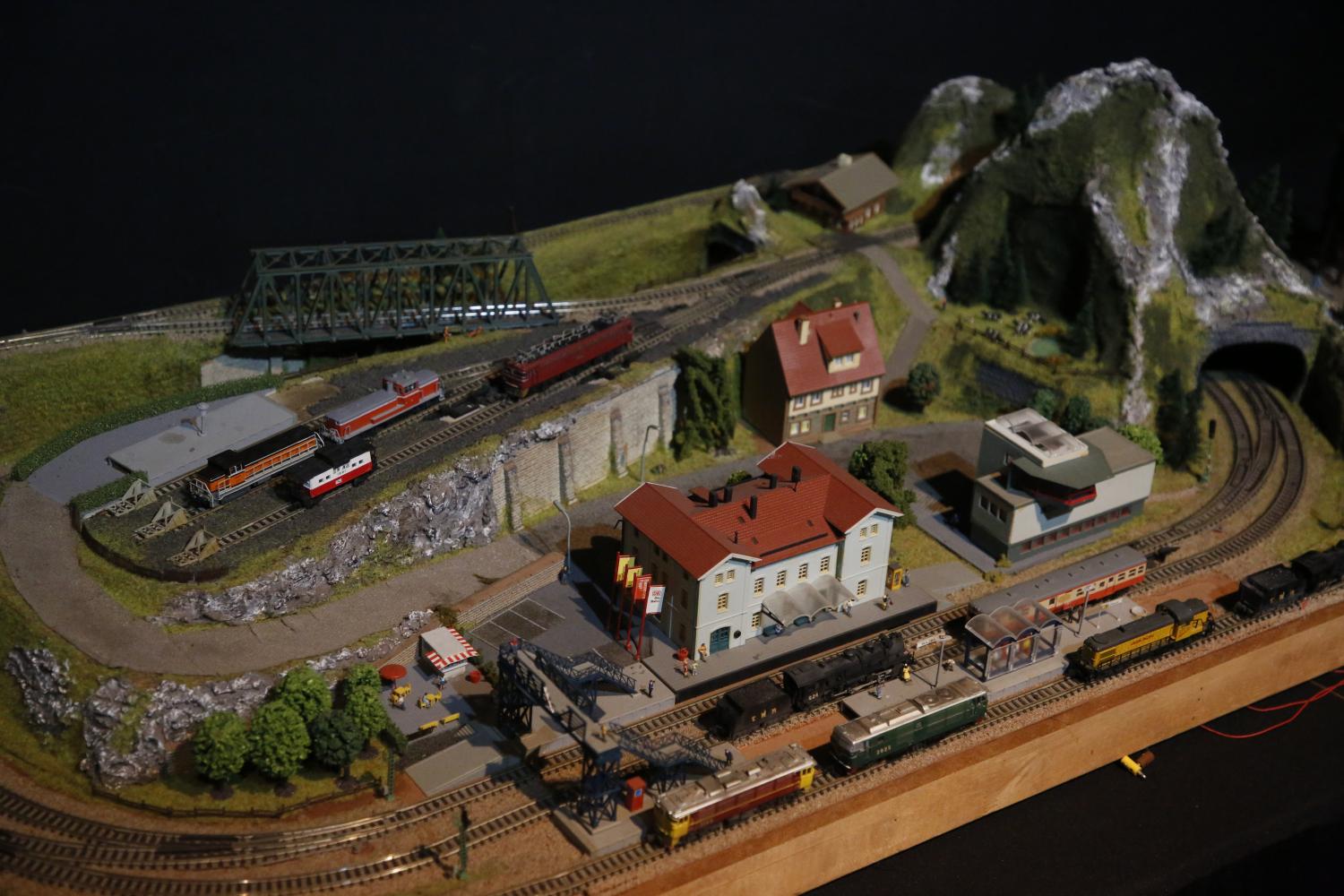