MB&F bulldogs its way to the head of the pack

MB&F and the British bulldog share a certain attribute -- the stubbornness that makes the horological concept laboratory blaze new trails in high-end watchmaking.

The first Horological Machine, HM1, was unveiled in 2007, two years after Maximilian Büsser founded MB&F, based in Geneva, Switzerland. The F in the brand name stands for Friends, referring to the team of professionals with specific skills involved in each project.

Büsser envisioned the playful bulldog model while he was travelling in Japan. A long list of friends is behind the HM10 Bulldog and Dark Bulldog, such as Through the Looking Glass founder and watch designer Eric Giroud, and Les Artisans Boîtiers casemaker Riccardo Pescante.

Since 2005, MB&F has turned traditional watchmaking of the highest craftsmanship into futuristic timekeeping machines. The Swiss brand has explored space, sky, road and the animal kingdom for creating idiosyncratic timepieces under the Horological Machine series, which include the HM3 Frog and HM4 Thunderbolt -- winner of the Design Watch Prize at Grand Prix d'Horlogerie de Genève 2010. 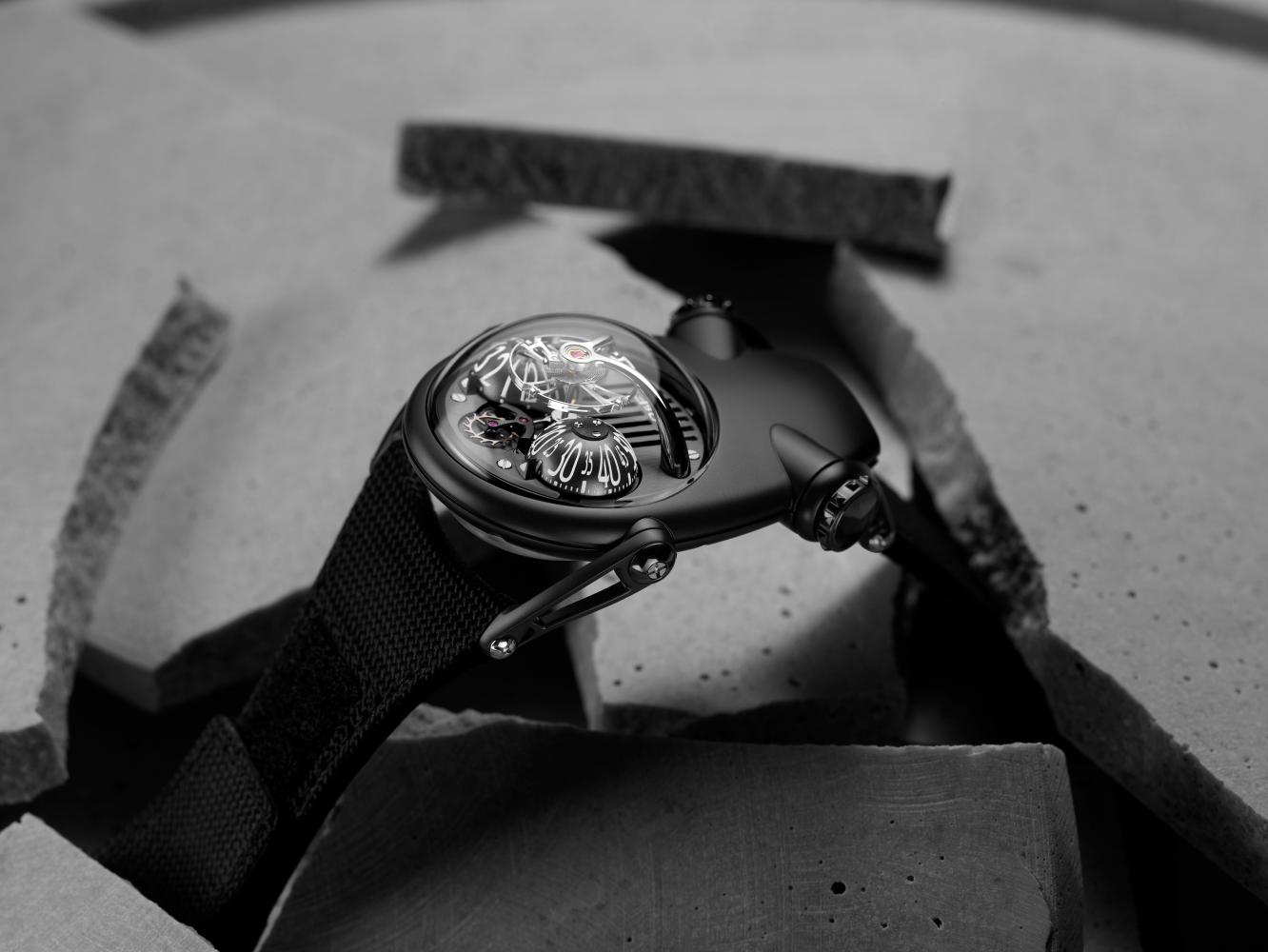 The sprung strap attachment 'legs' allow the case to fit closely around the wrist.

The following year saw the launch of the round-cased Legacy Machine collection, which pays tribute to 19th-century haute horlogerie by reinterpreting various complications. MB&F celebrated 10 years of the Legacy Machines with the LMX, which won the Men's Complication Watch Prize at the Grand Prix d'Horlogerie de Genève 2021.

The expertise honed over the years is embodied in the HM10 Bulldog, whose manual-winding engine comprises 301 components.

Beneath a bulging sapphire crystal dome, the oversized 14mm balance wheel with four traditional regulating screws flies high above the movement. Since its debut in the Legacy Machine N°1, the technically challenging "flying" balance wheel has become a signature of MB&F, appearing in the majority of Legacy Machines, HM9 and now HM10 Bulldog.

Evoking the pooch's eyes, the revolving time-telling domes originated from the conical hour- and minute-modules of the first Horological Machine N°3, which cemented MB&F's reputation as a disruptive watchmaker. 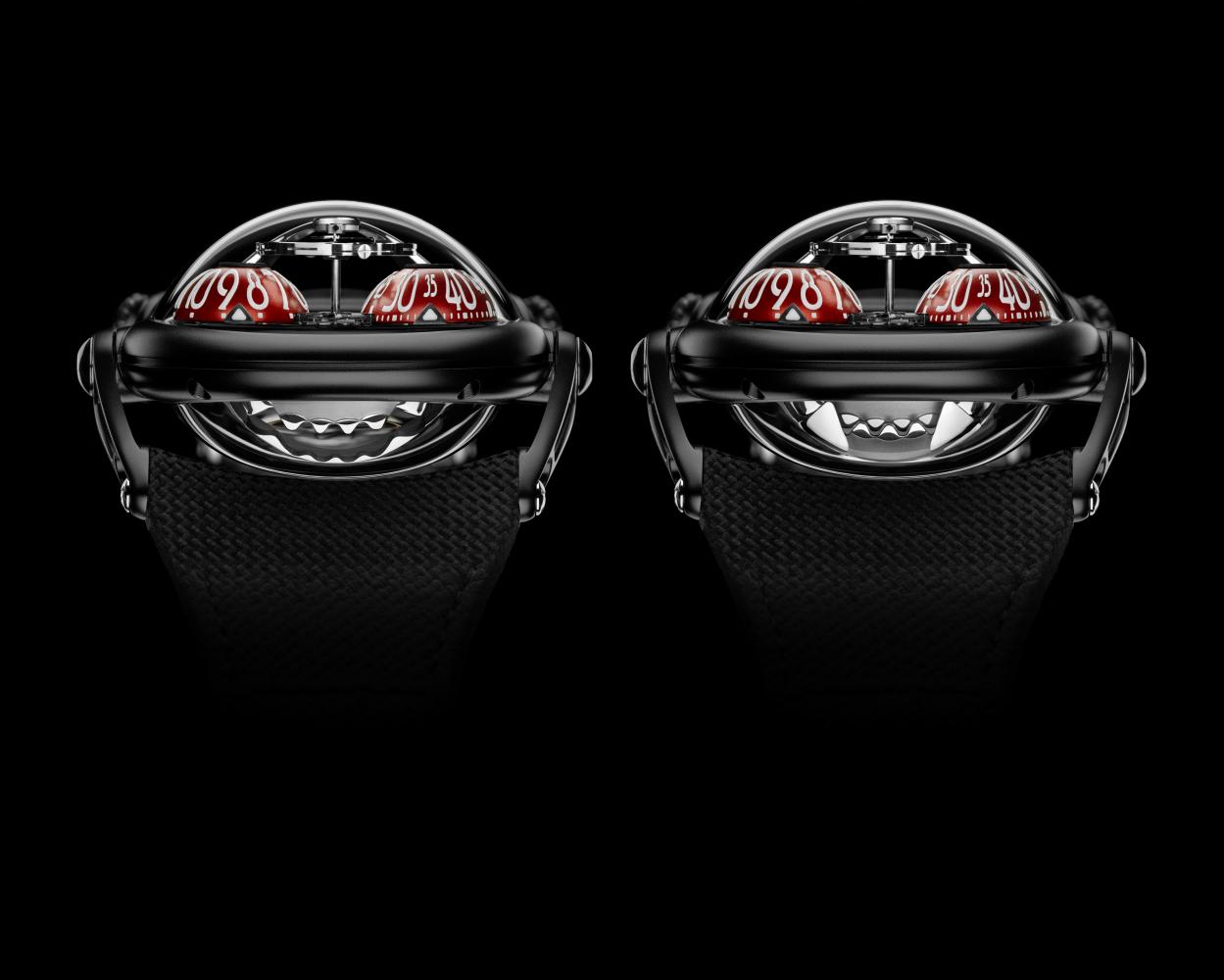 The power reserve is indicated in 3D by the opening and closing of the jaws.

Subsequently, the cones took on rounded forms in HM3 Frog, but there was an urgent need to make them as light as possible in order to place minimal stress on the rest of the engine.

Indicating hours and minutes, the paper-thin domes are machined from solid aluminium, chosen for its optimal strength to weight ratio. They weigh in at a micro-light 0.5g, reducing energy requirements to an absolute minimum.

Likewise, the massive "jaws" power-reserve indication has been carefully designed and calibrated to consume the least energy possible, allowing HM10 Bulldog to direct its considerable mainspring torque solely towards its suspended balance and its revolving hour and minute domes.

The single barrel imparts 45 hours of power reserve, indicated by the opening and shutting of the external hinged jaws. A fully closed mouth signifies that the model is wound down while seeing the rows of shining teeth means that the horological machine is charged.

The grillework motif in the "ribs" set beneath the balance and in the tail-end of the body echoes the automotive-inspired HM8, HMX and HM5. Located towards the rear of the body, separate crowns are actuated for winding and time-setting, 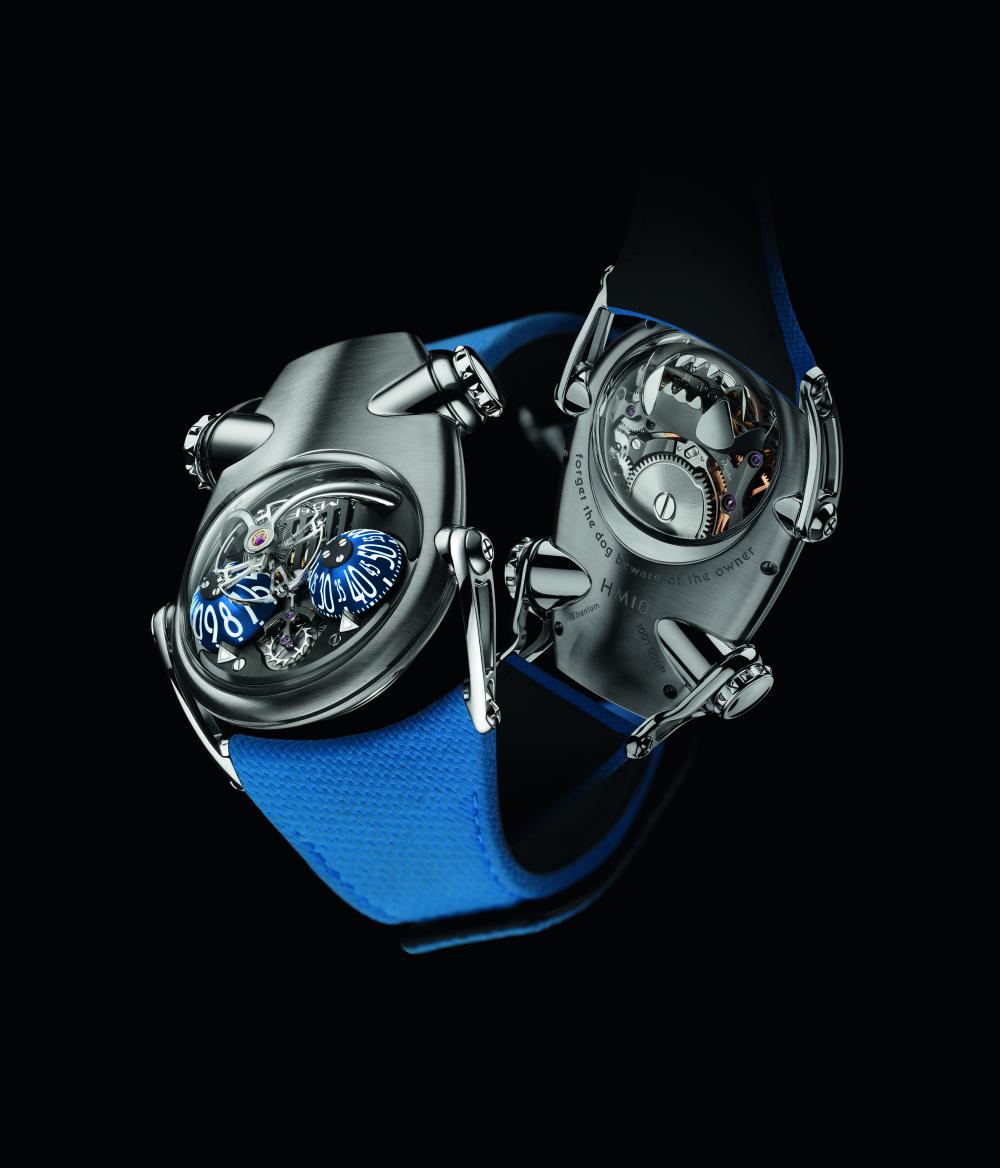 The rounded and compact case is made of grade 5 titanium or red gold and titanium for the launch editions of the HM10 Bulldog, while the Dark Bulldogs are housed in a microblasted stainless steel body with black PVD coating. Limited to eight pieces each, the dark renditions feature black, blue or red eyes.

Despite its outsize dimensions -- measuring 45mm across, 54mm from nose to tail and with a maximum height of 24mm -- HM10 Bulldog is a wearable watch.

Its sprung strap attachment "legs" allow the case to hug closely around the wrist. Like a cautionary message one might find on the collar of a feisty tail-wagger, the body of the HM10 Bulldog is whimsically engraved with "Forget the dog, beware of the owner". 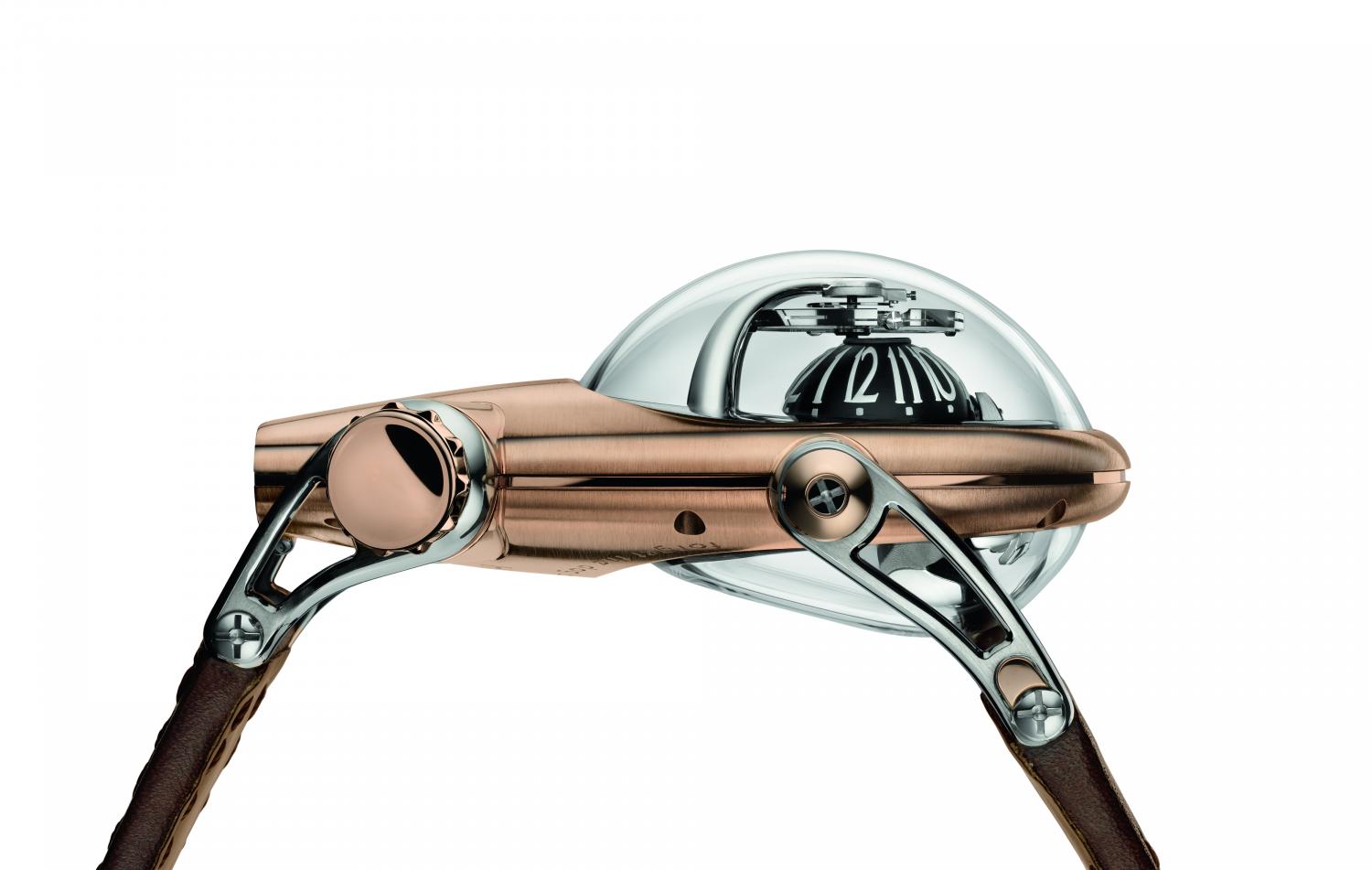