Sightseeing of a different kind

We eat with our eyes before we indulge our palate and to whet your appetite, here is a small list of original Easter creations from around the world.

TEA WITH THE QUEEN 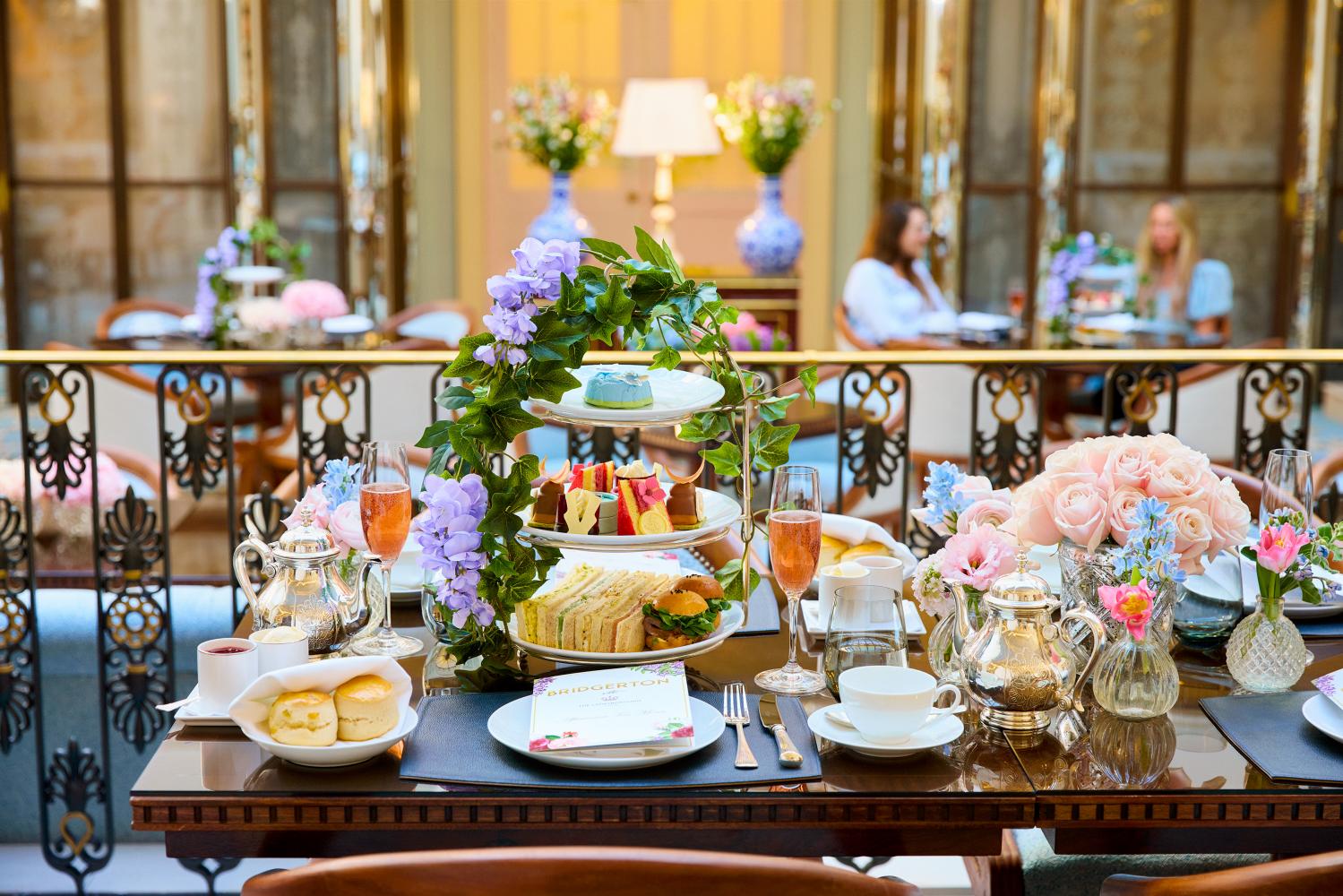 My word, dearest reader, happenings about the ton are heating up, indeed…

On good authority from Lady Whistledown, a social event not to be missed is coming to the ton this season. Dust off your Regency best, as The Lanesborough partners with Netflix and Shondaland to launch London's first, exclusive Bridgerton-themed afternoon tea.

The latest in its innovative series of seasonal afternoon teas, the tea pays homage to the Regency era, with a contemporary twist. The Bridgerton Afternoon Tea is crafted by head pastry chef Kevin Miller, who pays tribute to the key families in the hit series, in addition to "Lanesborough House", built in 1825 in the fashionable classical style by William Wilkins at the highpoint of Regency era and today, London's quintessential Regency building. Finger sandwiches and brioche sliders will comprise Coronation chicken, Clarence court egg mayonnaise, Smoked salmon and Rare roast beef. To accompany savoury flavours, scones with cream and jam, Miller's curated cake and a sweet treat concept that includes five signature highlights, the main one being "The Queen's Diamond", a nod to Edwina Sharma, this season's diamond. The Lanesborough's Bridgerton Afternoon Tea is priced from £65 (B2,846) per person. 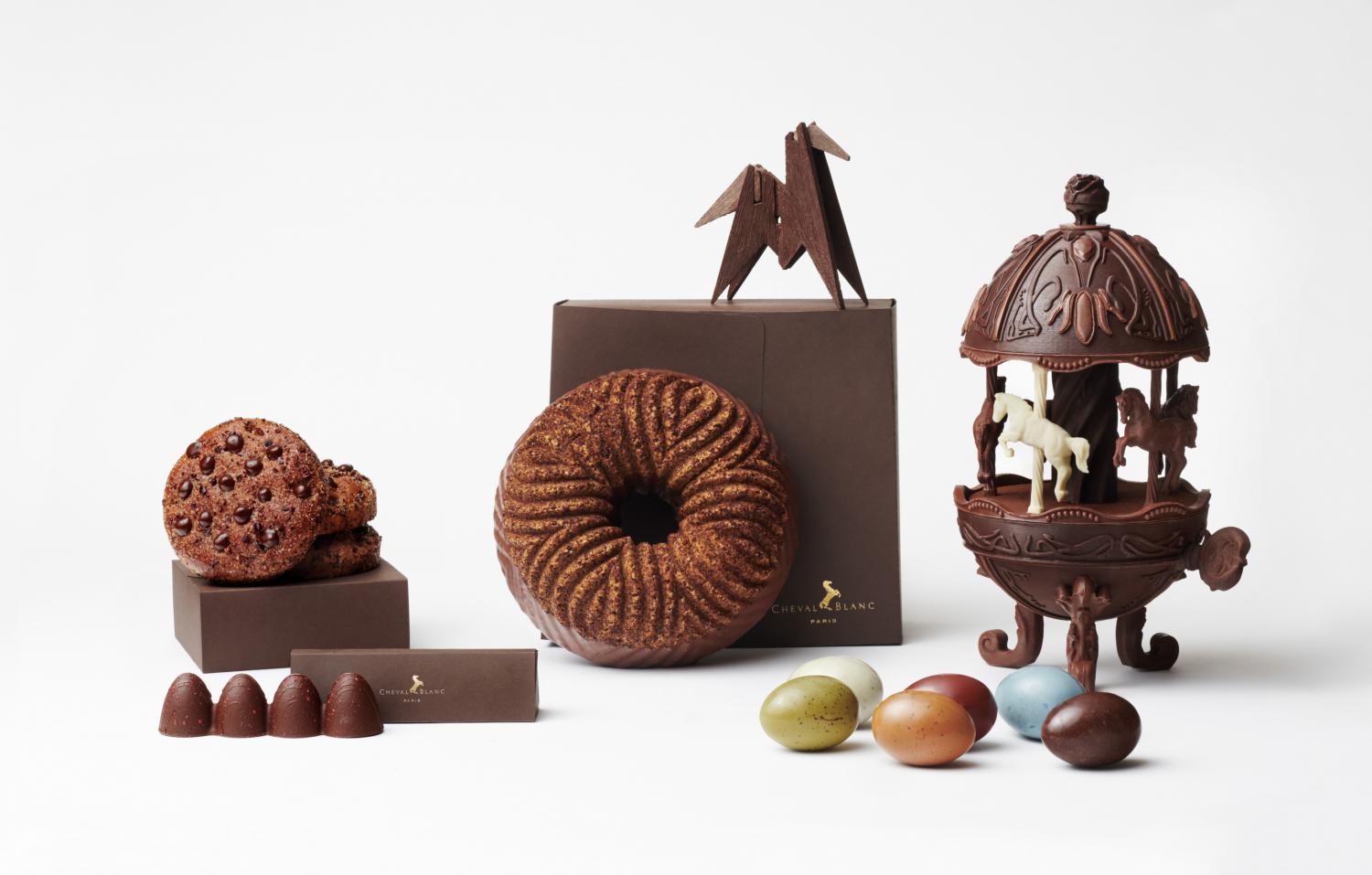 Until April 30, pastry chef Maxime Frédéric will conduct a series of chocolate creations to celebrate Easter. Special chocolates and desserts will be available in an ephemeral pop-up Chocolaterie at Limbar café in the Cheval Blanc Paris. Frédéric's emblematic signature egg, often referred to as the "Fabergé" of chocolate eggs, pays tribute to his Norman roots. Known as the "Carrousel Egg", it is built with a clever mechanism that sends the horses of the merry-go-round into a motion, fascinating one and all with its animated team of horses and the lone cheval blanc or white horse, twirling on a cocoa shell filled with crunchy hazelnuts. The smaller eggs take the form of colourful ones from the family farm, laid by its ancient line of chickens with fanciful plumage. The Carrousel Egg of Cheval Blanc Paris' limited edition costs €85 (B3,154) and is available from April 15-17.

CAT IN AN EGG 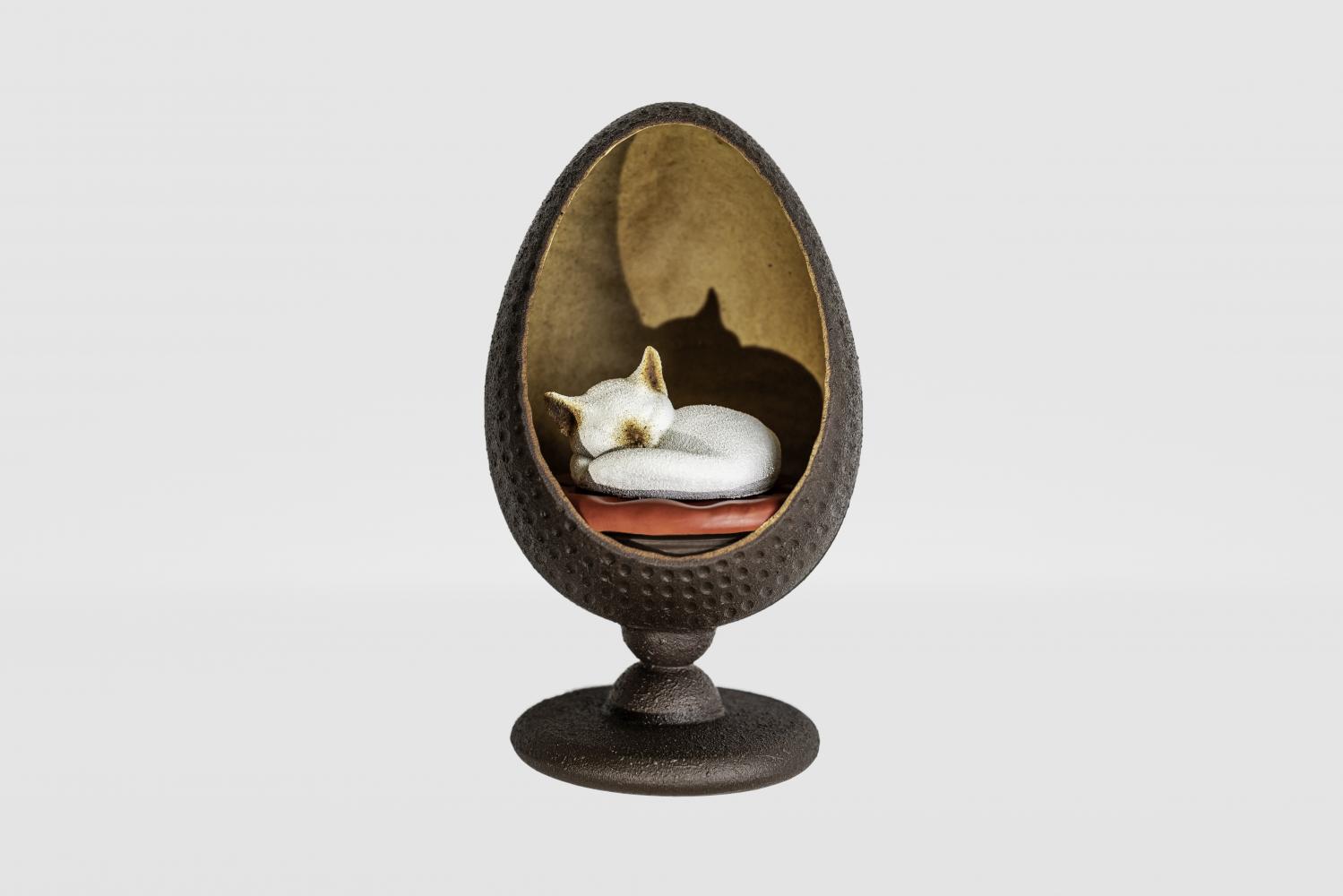 Le Bristol Paris is partial to furry friends and has been home to a male Birman cat named Fa-Raon. Last year, Fa-Raon's son, Socrate, was born allowing Fa-Raon to retire, leaving Socrate to take the reins as his successor. In honour of Socrate, head chocolatier, Johan Giachetti has crafted a dreamy chocolate egg. Open to one side, the egg is crafted from 70% dark Venezuelan chocolate and lined in caramelised white chocolate. A peek inside reveals the beautiful Birman cat made of milk chocolate with hazelnut and toasted brown rice, napping upon a silky red cushion made from white chocolate. Le Bristol Paris' Easter egg limited edition costs €65 and is available until April 24 by order from Les l'Epicerie des Ateliers du Bristol. 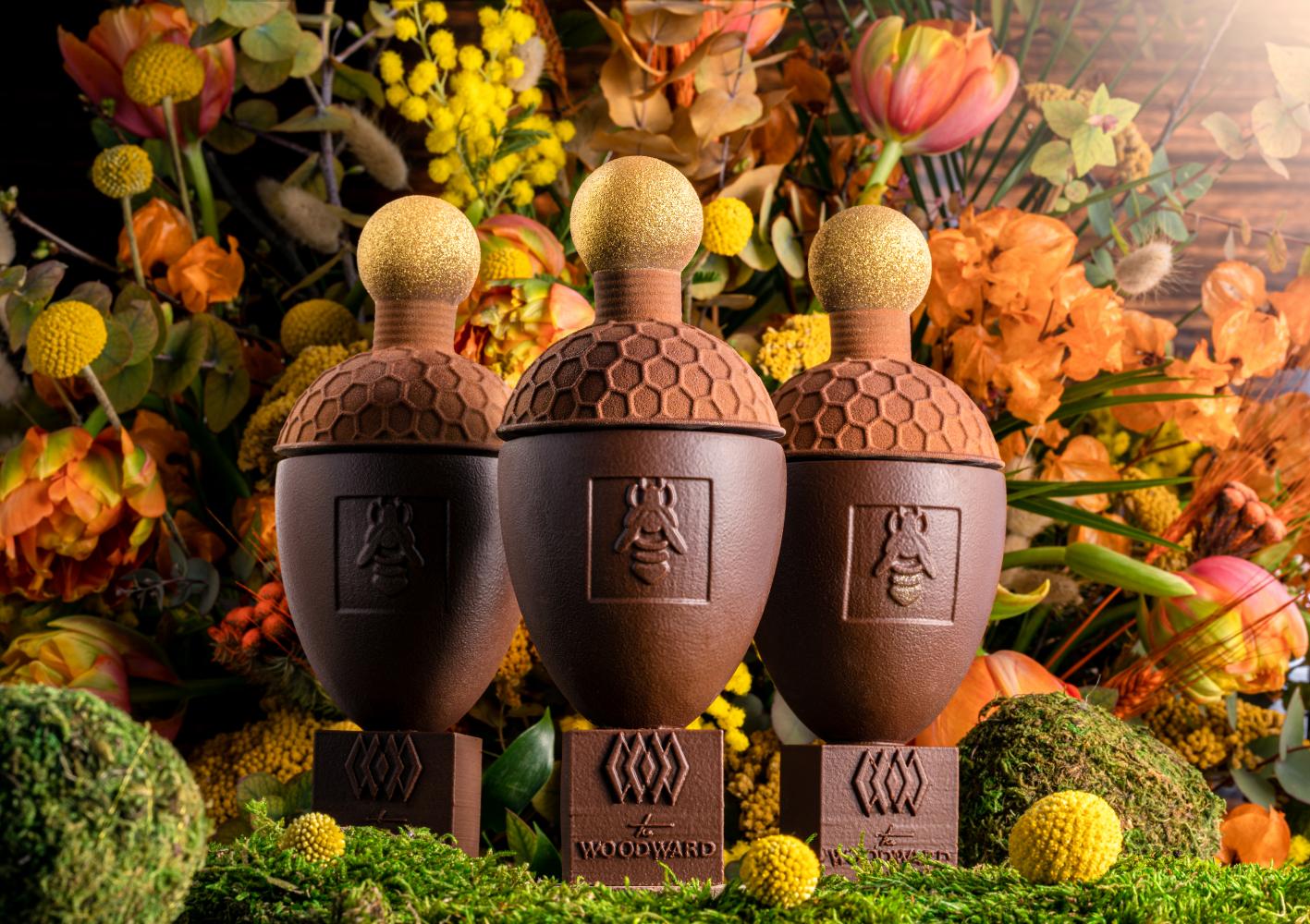 The Guerlain Bee. (Photo: The Woodward')

The Woodward's head pastry chef Titouan Claudet has drawn inspiration from La Maison Guerlain's glamorous eau de toilette. Original and delectable, the chef's chocolate egg creation takes on the elegant shape of the Aqua Allegoria bottle. Made of grand cru chocolate from wild Criollo cacao beans sourced in Beni, Bolivia, standing on a square pedestal of chocolate with fleur de sel, the egg is filled with caramelised hazelnuts and salted butter caramel, revealing infinitely decadent flavours in the spirit of chocolate mendiants. This limited edition creation will be available by order only from April 10-18 April for CHF98 (B3,528). Spa Guerlain also at The Woodward is offering special, sensorial moments for two, designed to be shared with one's mother, a friend or a special someone. The perfume consultation is available by appointment only, from 10am-7pm, daily for CHF 100 for 30 minutes. 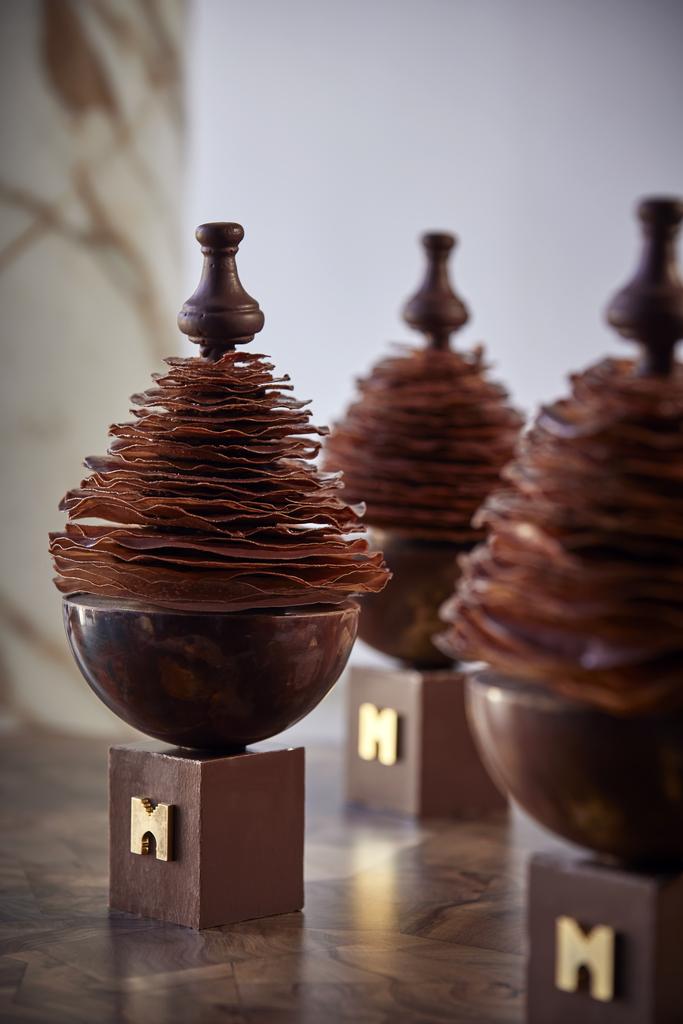 For Easter, Jean Lachenal, the pastry chef of the Royal Mansour Marrakech has designed a chocolate egg inspired by the delicate Moroccan pastilla. The Royal Mansour Marrakech is a showcase of Moroccan know-how. Every room, every nook and cranny, reflects the tribute that this hotel pays to the great talent of Moroccan artisans. Chef Lachenal, celebrates this ancestral know-how every year, through his original creations. At the heart of his egg, he slides a few chocolate-coated leaves, sprinkled with caramelised sesame seeds, with the base revealing a treasure of praline eggs.