Since arriving in Thailand under a year ago, Israel's ambassador to Thailand HE Orna Sagiv has felt at home in the Land of Smiles, often opting to experience the nation's rich culture and traditions through hands-on experience.

Besides acclimatising to new surroundings, she hopes to use this tenure to cement closer ties and goodwill between both nations by sharing knowledge and local wisdom through foreign policy strategies.

Having first visited Thailand as a backpacker over three decades ago, she has come full circle with her current posting.

On her list of to-dos are initiatives to encourage outbound tourism from Thailand to Israel as well as to get Israelies to explore business opportunities in Thailand and vice versa.

Although Thailand is popular with Israeli tourists, she said that Israel, despite being a small country, has much to offer Thais beyond just culture and history, such as leisure activities.

The ambassador voiced her desire to strengthen existing platforms for collaboration and build new ones in the form of a free trade agreement which would play a pivotal role in helping businesses in both countries work together.

"Israel is very strong in a couple of sectors, which both countries can benefit from, such as water management, agri-tech and energy. Water, agriculture and energy are global challenges," said Sagiv.

"Israel is number one in the world in water solutions. Today we recycle 90% of the water we use and about 75% of Israel's water is desalinated. As we are a semi-arid country, we have developed our system and centres for this. Israel is also one of the global leaders in agritech. We have close to 300 related companies, and a few hundred exporters of agritech services and products. There are so many Israeli start-ups. Israelis have a knack for seeing a problem and coming up with a technological solution to solve it." When Sagiv was asked what made Israel a resilient nation despite the numerous crises it has faced throughout history, she said much of can be traced back to the Holocaust, what led up to it, and the aftermath of the systematic slaughter of 6 million Jews.

"For Jewish people, the Holocaust is and will always be a national tragedy that left many traumatised for life. We had no place to call home for 2,000 years. During World War II, when the Holocaust was happening, we had no Jewish state," she said.

Sagiv remarked that weathering the aftermath of the Holocaust had taught Israel self-dependence and created a sense of humanitarian awareness and responsibility towards people suffering from national disasters and war.

"Many new innovations and technologies have been created in Israel largely because of a need to survive." 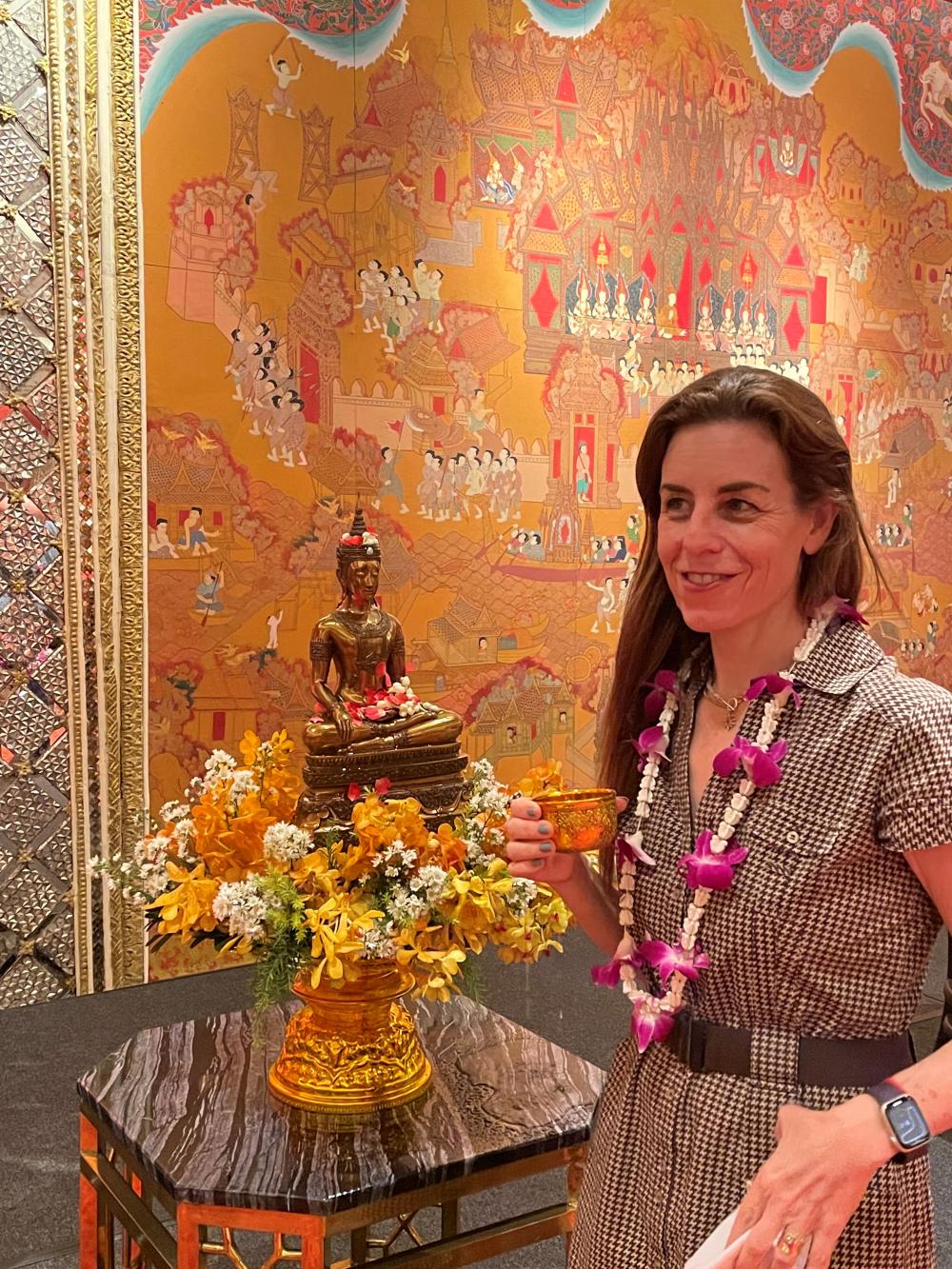 Ambassador Orna Sagiv is always happy to explore and Thai culture has made her time here fulfilling.

Despite frequent droughts, poor rainfall, sandy soil and arid conditions in most of our country, Israel's innovativeness has helped us become the region's breadbasket through agricultural technologies such as micro-drip irrigation and the reuse of treated wastewater for growing crops.

"We have had to depend on ourselves for everything from the beginning and that is why our people have continued over the generations to build creative technology to make our country thrive. Humanitarian aid is also part of our DNA," said the ambassador.

"Besides building field hospitals for Ukrainian refugees [fleeing Russian aggression], Israeli diplomats have been helping rescue Jewish orphans over there without thinking of their own safety. We have also welcomed refugees from Ukraine. The Jewish people know first-hand what it feels to not have a roof over their head, and we know how it feels to have nowhere to escape. Thus, it comes naturally to us to lend a helping hand when a need arises."

The Holocaust holds great significance for Israel and that is why when some people deny the genocide of Jews by Nazi Germany as a historic fact, the need to share this history is pivotal to establish mutual respect.

On the topic of "Nazi chic", Sagiv believes the practice of using Nazi-era style imagery and paraphernalia in clothing and popular culture does not just occur in Thailand but in other Asian countries as well, largely due to misinformation and ignorance about the Holocaust since it is not taught in high schools and universities.

Sharing what often happens when people are misinformed about such historical events, she remarked: "We see the word Holocaust loosely interpreted to mean something bad happening to you, but Hitler and Nazi symbols tend to symbolise strong leadership, being a visionary, and even power.

"It is also rather unsettling to see some countries encourage the sale of the [propaganda] book written by Hitler."

Sagiv said learning about the Holocaust is important not just because it is part of history, but also because propaganda can instigate people to do regretable things. "Being mindful of this is crucial, especially in today's age of social media. The young generation has to be encouraged to be careful to not fall into the trap of using harmful words to instigate, incite and support xenophobic behaviour which can lead to terrible consequences."

Leading up to International Holocaust Remembrance Day each year, she said efforts have been made to raise awareness through various activities that concludes with a ceremony held at the UN Building in Bangkok.

Due to the pandemic, this year the Israeli embassy in Bangkok decided to change it up.

"At the building where I live we invited around 25-30 people from all walks of life. The German ambassador to Thailand, media and a Thai university lecturer were present. We all gathered on the rooftop of the residential building to share a round table discussion of what we Jewish people call 'memory in the living room'. It is basically an informal setting where people talk about the Holocaust.

"I spoke about my mother, who was born during the Holocaust, and what happened to her family. Among those in attendance was a popular Thai blogger who shared his experience with us on his popular platform. The message received a lot of likes. In my opinion, this played a pivotal role in raising awareness about the Holocaust in a manner that reached a much larger audience than we would otherwise have expected."