Taking education into their own hands
Life
Social & Lifestyle

Taking education into their own hands

Many Thai children learn the alphabet by rote memory -- A for Ant, B for Boy, C for Cat and so on. But for Wasin Pathomyok and Plengmontra Bubphamas, parents of a two-year-old daughter, they created an A to Z poster using a human rights theme. The idea of the ABC human rights poster came after Wasin and Plengmontra read English children's books such as A Is For Activist, An ABC of Equality and F For Feminism.

"We purchased several international children's books which teach A to Z using different themes. It looked fun to learn and we wanted to have more books like that, so my wife Plengmontra suggested we should create one. Before we decided to create a human rights poster, we were thinking about different themes such as democracy, media literacy and online safety. We decided to go ahead with the human rights theme because we did not have an opportunity to learn about it when we were young. Understanding human rights is important. It helps people respect themselves and others as well as understand diversity and freedom of expression," explained Wasin.

Wasin and Plengmontra came up with the A to Z vocabulary in the poster together, but their final version was different from the draft. Wasin consulted with people at Amnesty International Thailand, where he previously worked, about the vocabulary they should use.

"In our draft, we had words like U is for Universal Design and Z is for Ze or gender-neutral. We were not sure we had come up with the best words. I decided to talk to people at Amnesty International Thailand and they helped us find words that fit best," Wasin said.

"In the current poster, we have U for Universal Declaration of Human Rights and Z for Zero Tolerance for Hate. I drew an elderly person for D is for Diversity after Amnesty International Thailand commented that our poster did not have enough representation of elderly people. I also changed L from representing LGBTI to LGBTQIA+ because Amnesty International Thailand wanted to cover more groups. LGBTQIA+ refers to lesbian, gay, bisexual, transgender, queer, intersex and asexual," Wasin added.

As a graphic designer, Wasin designed the colourful and attractive poster himself. It took him one year to make changes and complete. The letters A to Z on the poster represent human rights. For example, A is for Assembly, B is for Bias, C is for Consent and D is for Diversity. After launching the posters on shop.amnesty.or.th and facebook.com/tukta.tubby, the parents received both positive and negative feedback. 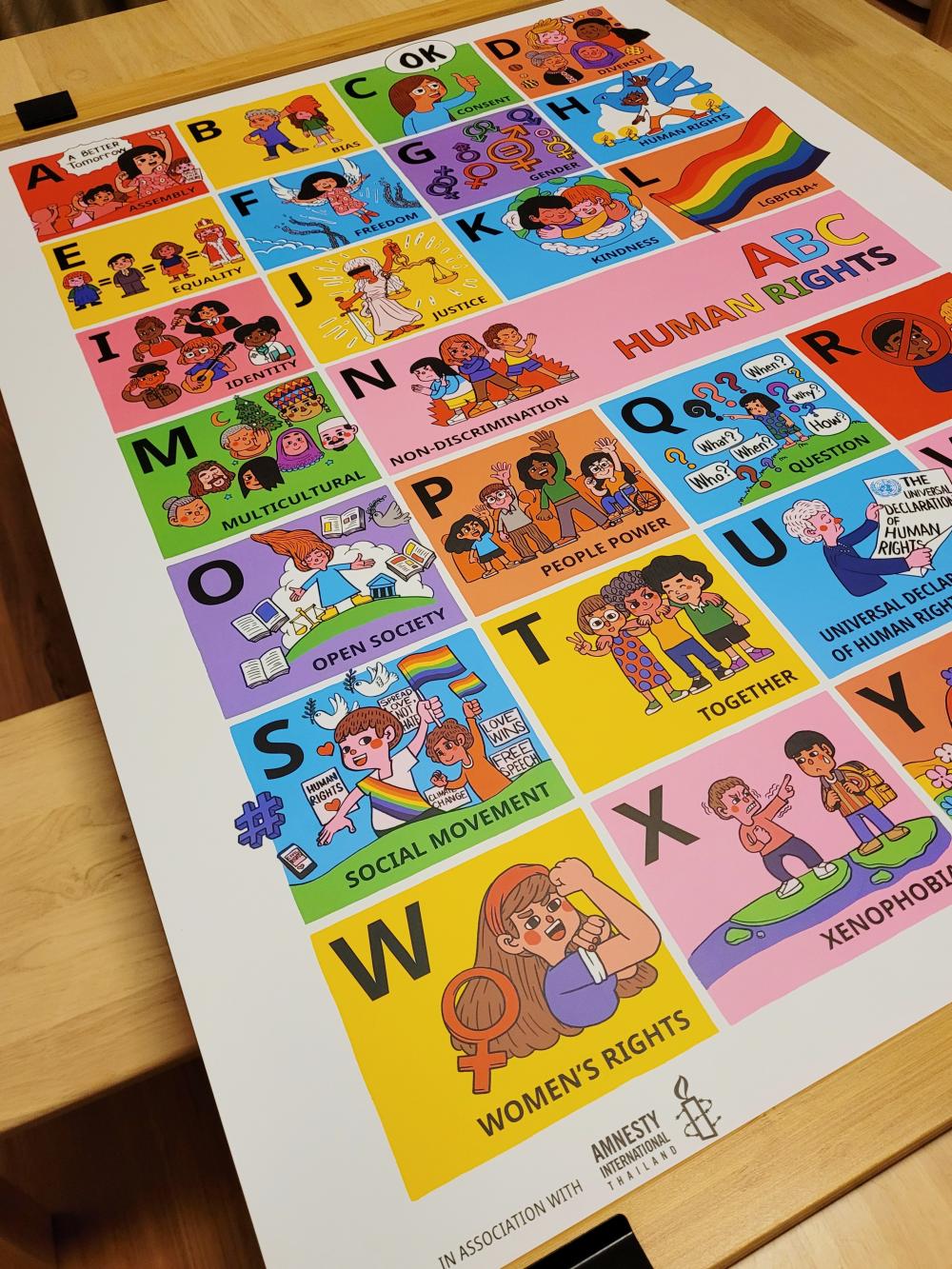 "People shared our poster on social media. Positive comments thanked us for making the poster. We were glad to receive those comments and understood these parents wanted to provide this basic knowledge to their children," said Wasin.

People who gave negative comments criticised the poster had difficult words for children and it may affect their development.

"Some people criticised difficult words in the poster may slow development in children. I disagree with those comments. I believe developmental delays are caused by forced schooling or blocking imagination or unreasonable punishment. Developmental delays have nothing to do with the human rights poster. This poster is a beginning to discuss vocabulary and human rights. The poster does not force anyone to learn," explained Wasin.

When asked about the age-appropriateness of the poster, Wasin said it is suitable for all ages. In the poster, there are difficult words for children such as X is for Xenophobia and U is Universal Declaration of Human Rights. Wasin explained that he can tell stories related to the vocabulary to his daughter.

"According to a dictionary, xenophobia means dislike of or prejudice for people from other countries. I can explain this by telling my daughter that in an international school, there are teachers of different races, and different eyes and hair colours, but we all are human. We do not hate one another because we have different skin and hair colour. For Universal Declaration of Human Rights, I can tell my daughter that it is a contract or a written agreement in which many countries promise to protect human rights," said Wasin. 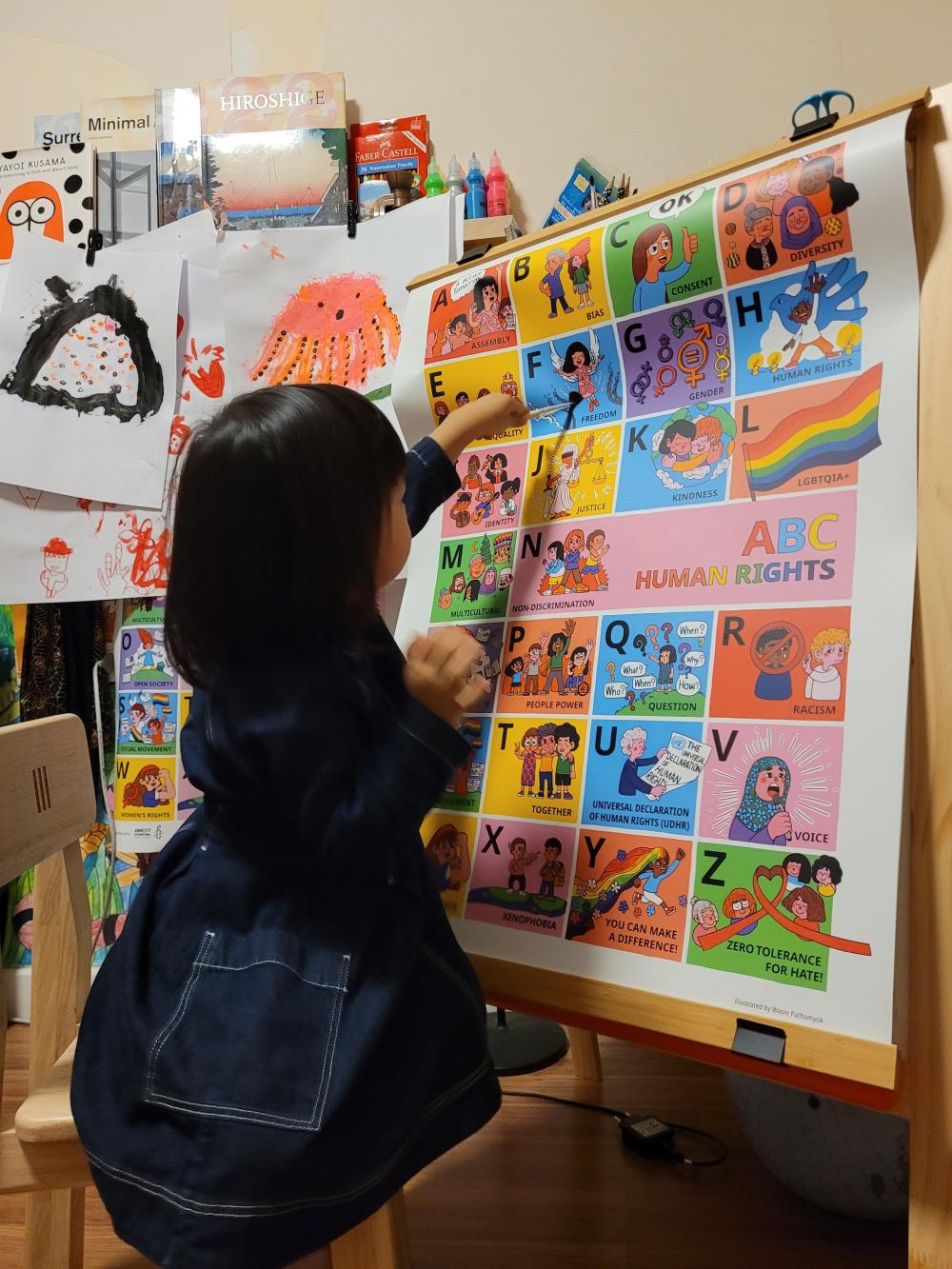 The daughter of Wasin and Plengmontra is only two-and-a-half, so she is too young to understand the meanings of the vocabulary in the poster. Her reaction to the poster is to imitate the cartoon characters.

"There is a character of a child with a wing in F for Freedom and my daughter was flying or jumping along with it. When I said K for Kindness, she hugged me like the people on the poster. I did not create the poster to make my daughter memorise the vocabulary. Human rights are based on love. The more we discuss human rights, the more we understand it," he said.

While developed countries have created textbooks for children, Wasin found that textbooks in Thailand lack variety.

"As a parent, I would like to see media help children develop their analytical thinking. Most textbooks in Thailand emphasise memorising content which makes them lack variety. Our society should have more questions than answers. For example, Thai Buddhism textbooks are too specific. There is no mention of freedom of choice in religious belief," said Wasin.

Wasin and Plengmontra use both traditional and new media to help their daughter learn new things. Wasin said traditional media such as books and posters allow children to use their own imagination while new media such as tablets and social media have sounds and moving images that can help children learn pronunciation accurately.

The human rights poster has been well received by progressive parents. Is it possible that these posters will make a change in society?