"We are ready. This marks the first time that we're doing our own tour in 16 years, and we will bring the party to the front of your doors. Along with a cool band, our friends Hariguem Zaboy will be joining and filling in for the fun this time. There will also be local bands in each location, we will keep you posted. We will do 16 provinces from North to South in over 40 days of travel. So we would like to invite everyone to be a part of this special event," said the group on their official Facebook page.

Desktop Error consists of Lek Kongphaibun (guitar, lead vocal), Adisak Poung (guitar, keyboard, vocal), Wuttipong Leetrakul (guitar, keyboard, vocal), Chanarong Jamkow (bass) and Phatharhaphon Thongsuka (drums). They were one of the first Thai rock bands to introduce local audiences to subgenres like post-rock, dream pop and shoegaze. The group have released a handful of successful singles and albums, including their 2014 critically acclaimed second album Keep Looking At The Window. The band have played at many sold-out shows across the country and abroad and have headlined numerous festivals, including the Fat Festival, Big Mountain, Stone Free Music Festival and CAT Expo. 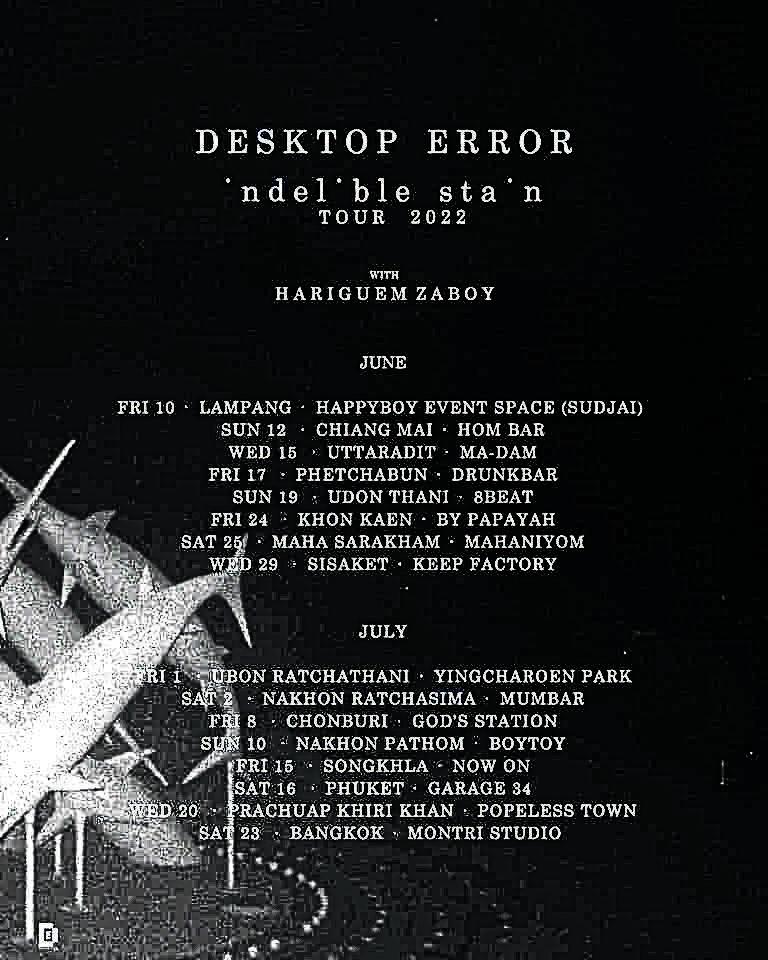 The band's latest tour kicks off in the northern provinces of Lampang, Chiang Mai and Uttaradit beginning on June 10, and then multi-night stands in Isan including Udon Thani, Khon Kaen, Maha Sarakham and Si Sa Ket. They then go south to play at Hat Yai and Phuket in July, before concluding with a July 23 show at MonTri Studio in Bangkok.

Stay tuned for any further updates on their Facebook page. For more information on the tour schedule, as well as ticket sales, visit desktoperror.com, or add Line chat lin.ee/R8GvoMM.