Plot your own course

Breitling's modern-retro timepieces revolve around air, land and sea themes. This year the Swiss watchmaker takes to the sky by celebrating the Navitimer's 70th anniversary with a redesigned collection, recently launched on a Zurich-to-Geneva flight.

By providing flight instruments, Breitling's ties with aviation began in the early 1940s.

In 1952, Willy Breitling developed the Navitimer as a wrist-worn instrument featuring a circular slide rule that enabled pilots to perform all necessary flight calculations, such as average speed, distance travelled, fuel consumption and rate of climb or descent.

He actually adapted the logarithmic slide rule of the 1940s Chronomat for aviation purposes and integrated it into the Navitimer's rotating bezel, surrounded by small beads to make it easier to manipulate.

A word blend between navigation and timer, the Navitimer was originally created for the US Aircraft Owners and Pilots Association (AOPA), whose members received the 41mm model in 1954. Considered large at that time, the diameter of the flight tool accommodated all the easy-to-read information on a black dial, with the AOPA logo positioned prominently at 12 o'clock. 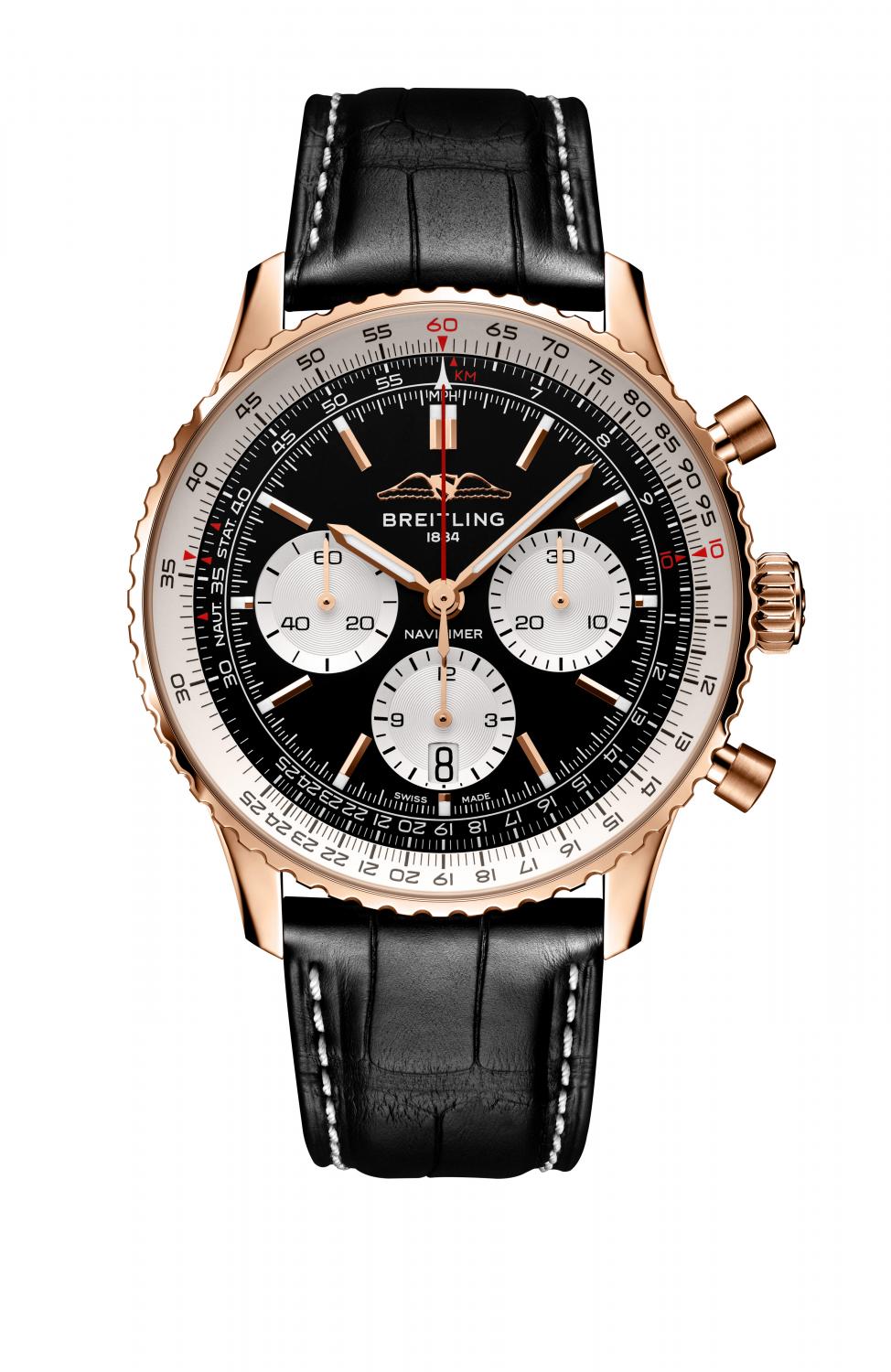 In late 1955, the Breitling brand name above a stylised winged logo appeared on the dial of models available to non-AOPA customers.

The Navitimer grew up alongside the burgeoning civil aviation industry, and became a mainstay in cockpits, sitting on the wrists of pilots flying overseas in the late 1950s.

The 70th anniversary collection boasts dials in bold colours and enhanced styling, while AOPA wings make a comeback at 12 o'clock.

The original is further characterised by the circular slide rule, baton indexes, chronograph counters and notched bezel. The new Navitimer B01 Chronographs carry the DNA, but a closer look reveals modern refinements.

A flattened slide rule and a domed crystal create the illusion of a more compact profile, while alternating polished and brushed finishes give the metal elements a lustrous yet understated quality. 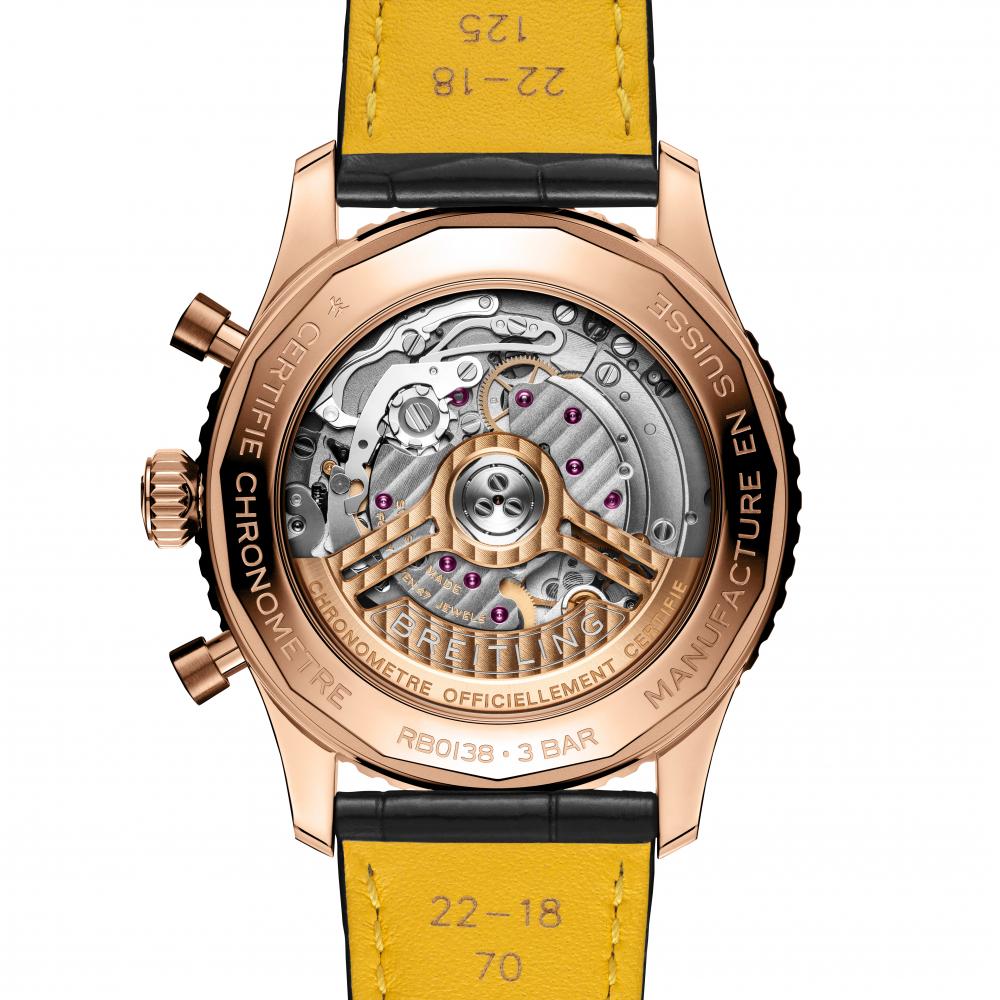 Breitling has fashioned the new Navitimer for both men and women, in stainless steel or red gold cases in three sizes, 41, 43 and 46mm, matched with straps in semi-shiny alligator or seven-row metal bracelet.

The date is indicated in a discreet window in the subdial at 6 o'clock.

This year Breitling also celebrates 60 years of the Navitimer in space.

Following a request from astronaut Scott Carpenter, the pilot's watch was modified and named the Cosmonaute, for his Mercury-Atlas 7 mission in May 1962. 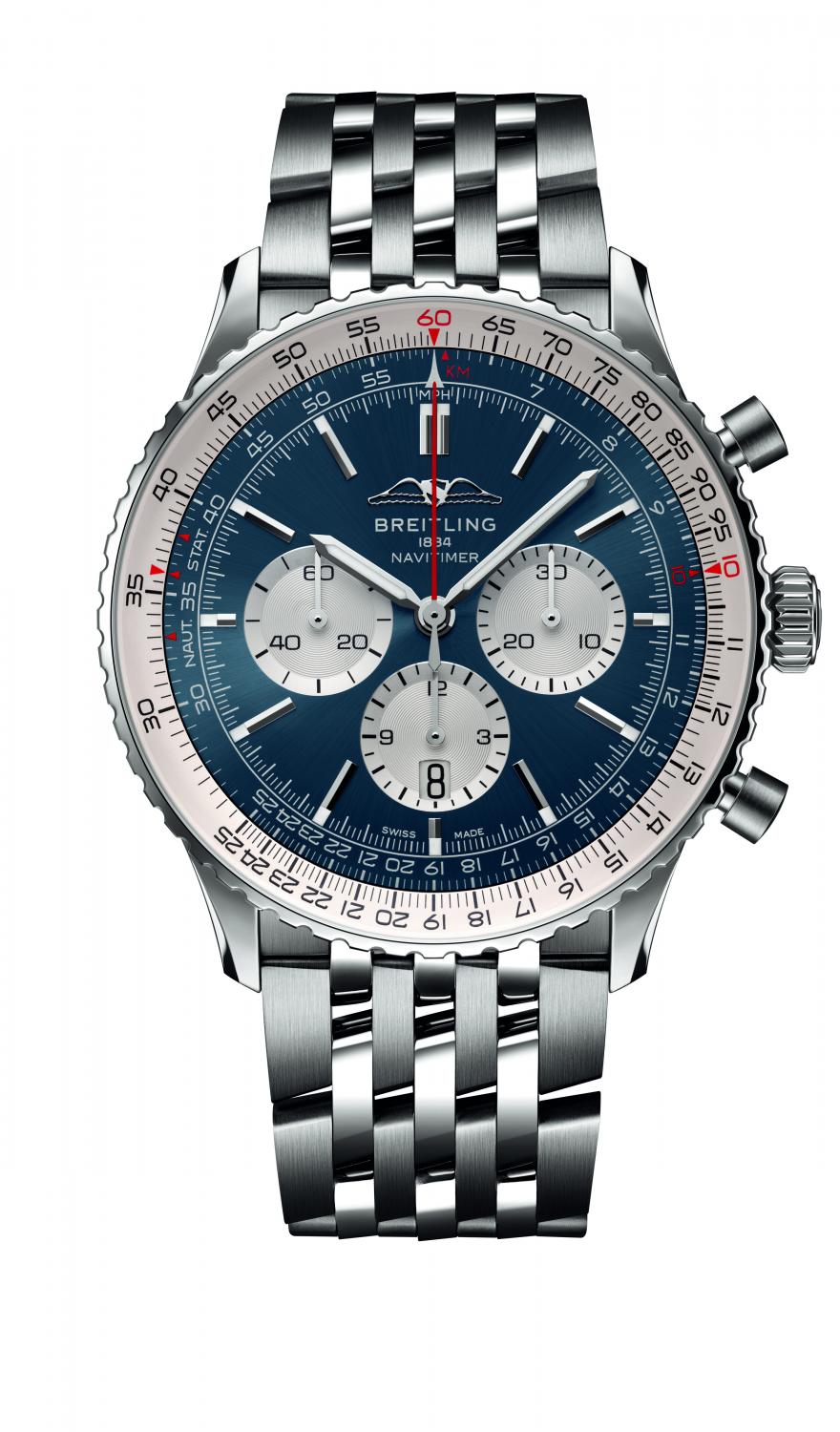 Steel Navitimer B01 Chronograph 46 matched with a seven-row bracelet.

Other iconic models include the Navitimer Twin Jet with a logo comprising two superimposed aircraft from the mid 1960s; and the mechanical-wound Navitimer Reference 81600 with a new winged Breitling logo, introduced in 1985.

The company was founded a century earlier in 1884, when Léon Breitling opened an atelier in Saint-Imier, located in the French-speaking Bernese Jura.

Breitling became notable for chronographs from the beginning of the 20th century and played a pioneering role in the development of the modern chronograph, which is the very essence of the Navitimer.

Other incorporated complications include the rattrapante (from the French rattraper meaning to catch up), which measures two elapsed times simultaneously, via two superimposed central chronograph hands.

After seven decades, beyond being a flight tool the model has become a symbol for those plotting their personal journeys through life. 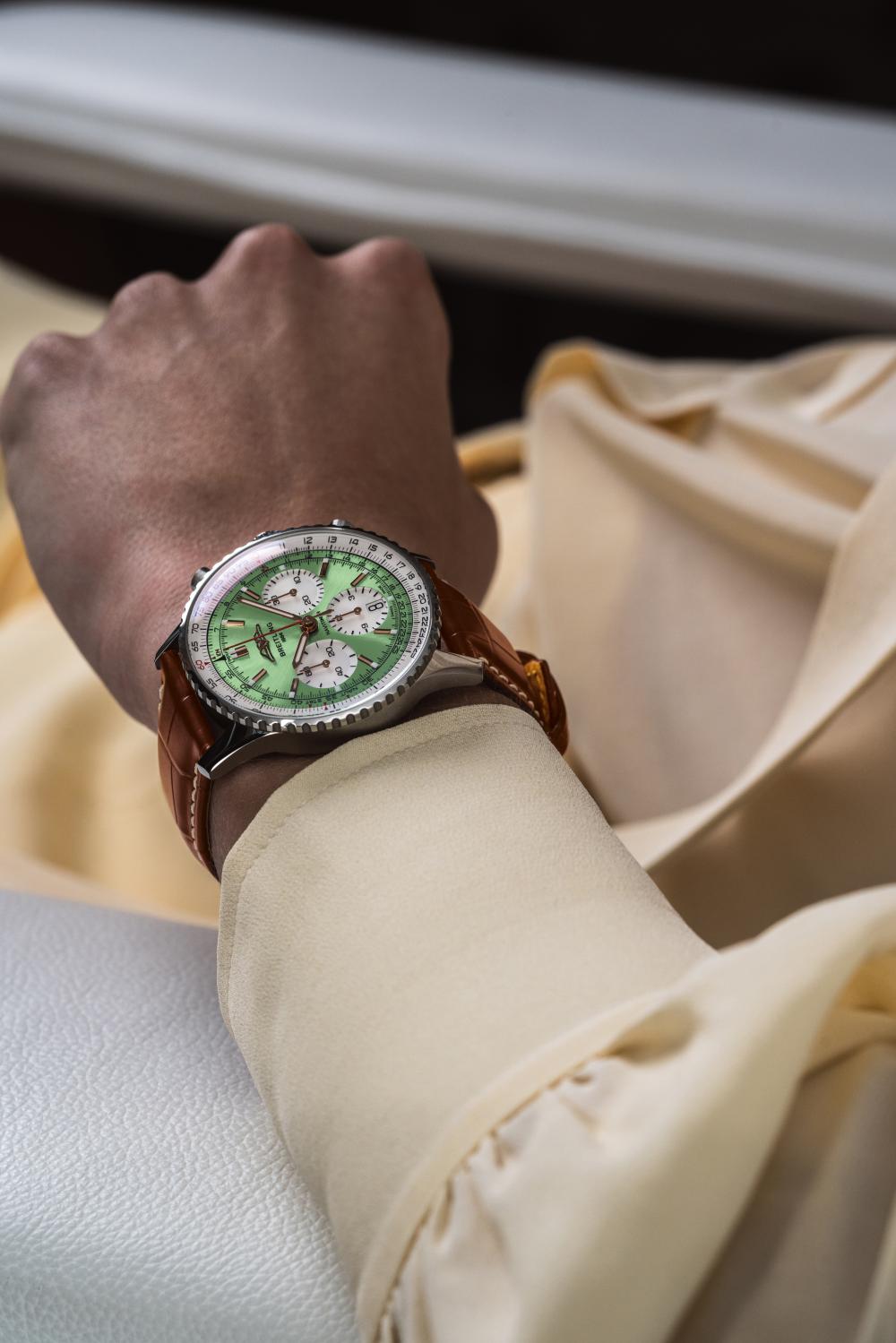 Navitimer B01 Chronograph 41 with a mint-green dial.

Each member of the Navitimer Squad has been on an incredible journey to get to where they are today at the top of their fields. They have charted a course and stayed on it through sheer determination, to achieve their next set of ambitions.

Through powerful visuals and their own narration, the campaign gets to the heart of these moving journeys. 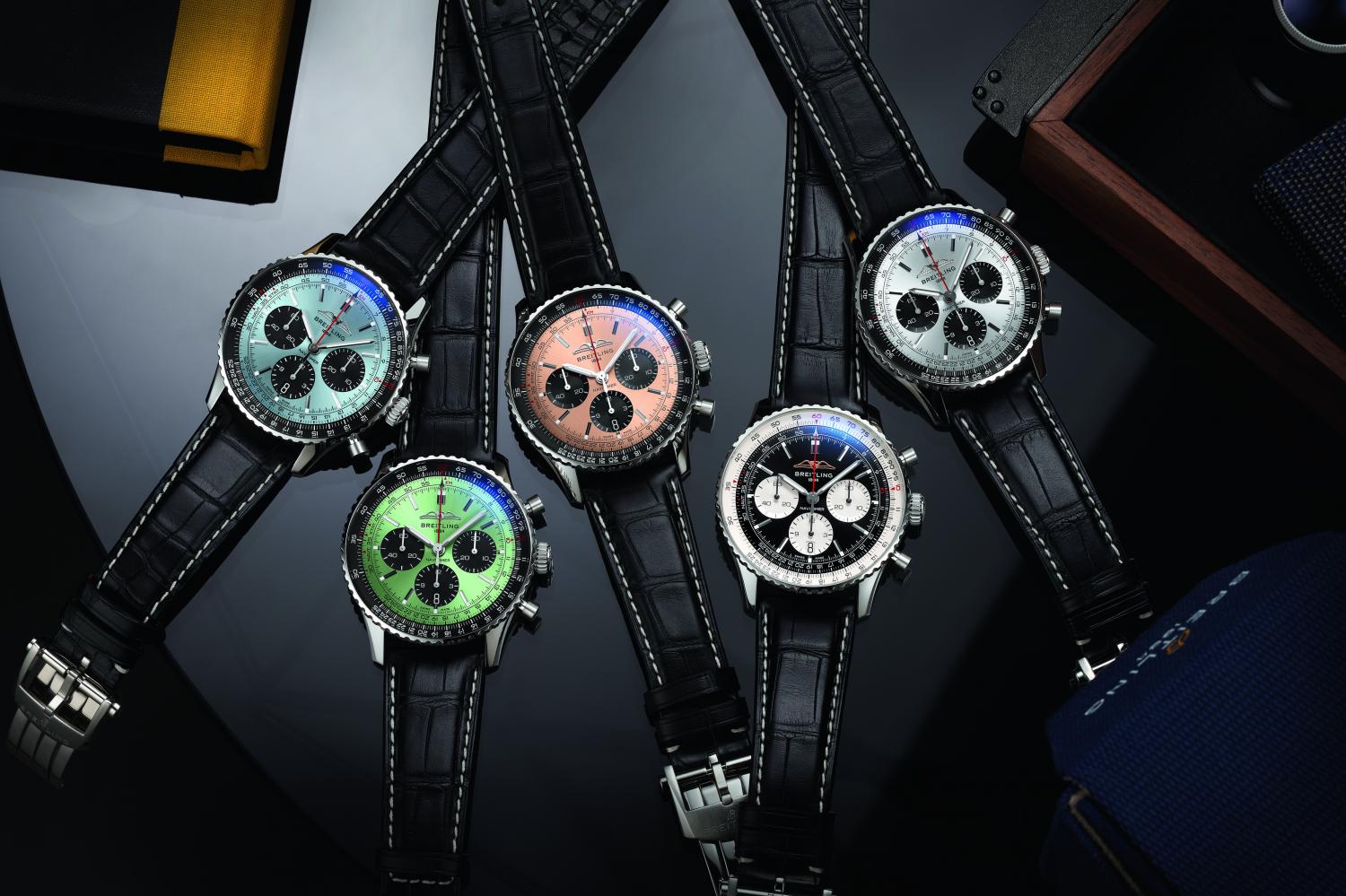