Why are there so few women in top managerial roles in Japan?
Life
Social & Lifestyle

published : 15 May 2022 at 13:48
writer: DW News
A participant holds a banner at a march to call for gender equality and protest against gender discrimination on International Women's Day in Tokyo on March 8, 2022. (Reuters photo)

TOKYO: Despite decades of promises that women would have the chance to "shine" in Japan's corporate and political worlds, the country lags behind other industrialised nations in gender equality.

Japan's financial services watchdog is introducing a new regulation designed to encourage companies to employ more women in senior management positions, although women are divided on whether the change will have an impact on the nation's male-dominated business world.

The Financial Services Agency will require firms listed on the stock exchange to reveal the ratio of women in senior positions within their organisations in their annual securities report.

The new regulation will affect around 4,000 companies and is expected to become mandatory in reports from April next year, the start of the financial year.

The plan also requires companies to disclose average pay by gender and the ratio of male employees who take child care leave, with the intention of providing investors with a better picture of how companies are performing on gender equality metrics.

Aware of deepening structural imbalances in the population and the need to get more women into the workplace, successive Japanese governments since the turn of the century have passed legislation designed to assist women to stay in employment after having a family and to climb the corporate ladder.

In 2014, then Prime Minister Shinzo Abe went as far as to say that his administration was going to make Japanese women "shine" in the workplace, in the political world and broader society.

That ambition, however, has failed to materialise.

According to the most recent statistics released by the Switzerland-based World Economic Forum, Japan ranked 120 out of 156 nations in the world for overall gender gap, and an only narrowly better 117 in economic participation and opportunity. Japan ranked significantly lower than other G-7 nations.

The country also fell short of its own targets. In 2003, the government announced that it wanted to see 30% of all management positions filled by women by the year 2020. Official statistics released in 2021, however, revealed that just 13.2% of managers were female, well below the average of 30-40% seen in European and North American companies.

"The agency's regulations are a very positive thing, we believe, especially when Keidanren [The Japan Business Federation] is making similar requests of its member companies," said Tsumie Yamaguchi, an executive of the Tokyo-based pressure group Women in a New World Network.

Yamaguchi said she had been encouraged when previous prime ministers announced targets for women in both the workplace and Japan's political world, but was subsequently disappointed at the lack of progress.

And for that, she blamed the men of Japan's traditionally male-dominated society.

"The number of men in politics and business in Japan is much larger than women and those men have a strong desire to keep their positions," she told DW. 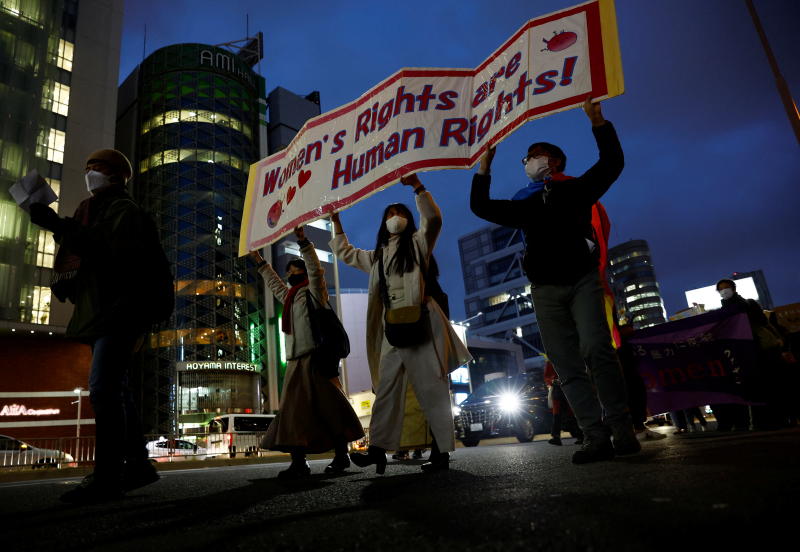 Participants call for gender equality during a rally on International Women's Day in Tokyo on March 8, 2022. (Reuters photo)

A traditional place in society

"Historically, Japanese men were told by their parents and society that their responsibilities lay outside the family, but women were taught that they had to stay home and care for the household," she said.

"Even today, that kind of attitude exists in many people's minds."

Chisato Kitanaka, an associate professor of sociology at Hiroshima University, agreed that the Financial Services Agency's new regulation was a "positive development," albeit long overdue.

"Japan lags behind other developed countries badly and even today it is rare to find a woman who is a department or division head at a corporation," she said.

"Old attitudes and stereotypes still linger in too many workplaces," said Kitanaka, who specialises in workplace issues. "Lots of companies do not hire as many women as men, even when they have the same qualifications, and then they are slow to promote them."

A major part of the problem is that while legislation was enacted as far back as 1986 to guarantee employment equality between the genders, the law is toothless because it contains no sanctions on any companies that fail to abide by the rules, she pointed out.

The only punishment for firms that ignore the law is publication of their name, a measure designed to shame companies into compliance. To date, Kitanaka said, two companies have been named for breaking the 1986 law.

And she is not optimistic that meaningful change is on the horizon for Japanese women.

"It is difficult to change laws, but it is even harder to change attitudes," she said. "It is easy for men in the business and political worlds here to do nothing instead of doing the right thing."

Women in a New World Network's Yamaguchi, however, is more positive about the future.

"I am positive because more and more young women today have all the skills and abilities that they need to do well in business environments, plus they are bringing other attributes to the workplace," she said, adding that "many are more efficient, for example, than men and I think that senior managers are beginning to recognise that."

"More companies will slowly realise that having women in leadership positions is a benefit to their organisation and I see young women graduating from universities today as being more positive about their futures."