Hidden in an alley near a train station, Kongleechongsun School had been out of use for years. For outsiders, it could easily go unnoticed. Founded over a century ago by merchants of Chinese descent, the school experienced many interruptions including state control. It was not until the end of World War II that descendants rebuilt the now-defunct school.

Located on the same piece of land, the Tuek Din Shrine dates back two centuries. In those days, Chinese immigrants built it in honour of the god of commerce, Pueng Thao Kong, and other divine figures. Despite their dilapidated condition, they have been a spiritual anchor for local residents, especially old-timers, in Talat Phlu.

Recently, they held a cultural festival at their community school to raise awareness of the neighbourhood, featuring a wide range of activities from performances and workshops to a local fair and a seminar. In the near future, the old school will be renovated and transformed into a museum to preserve the roots of the community. 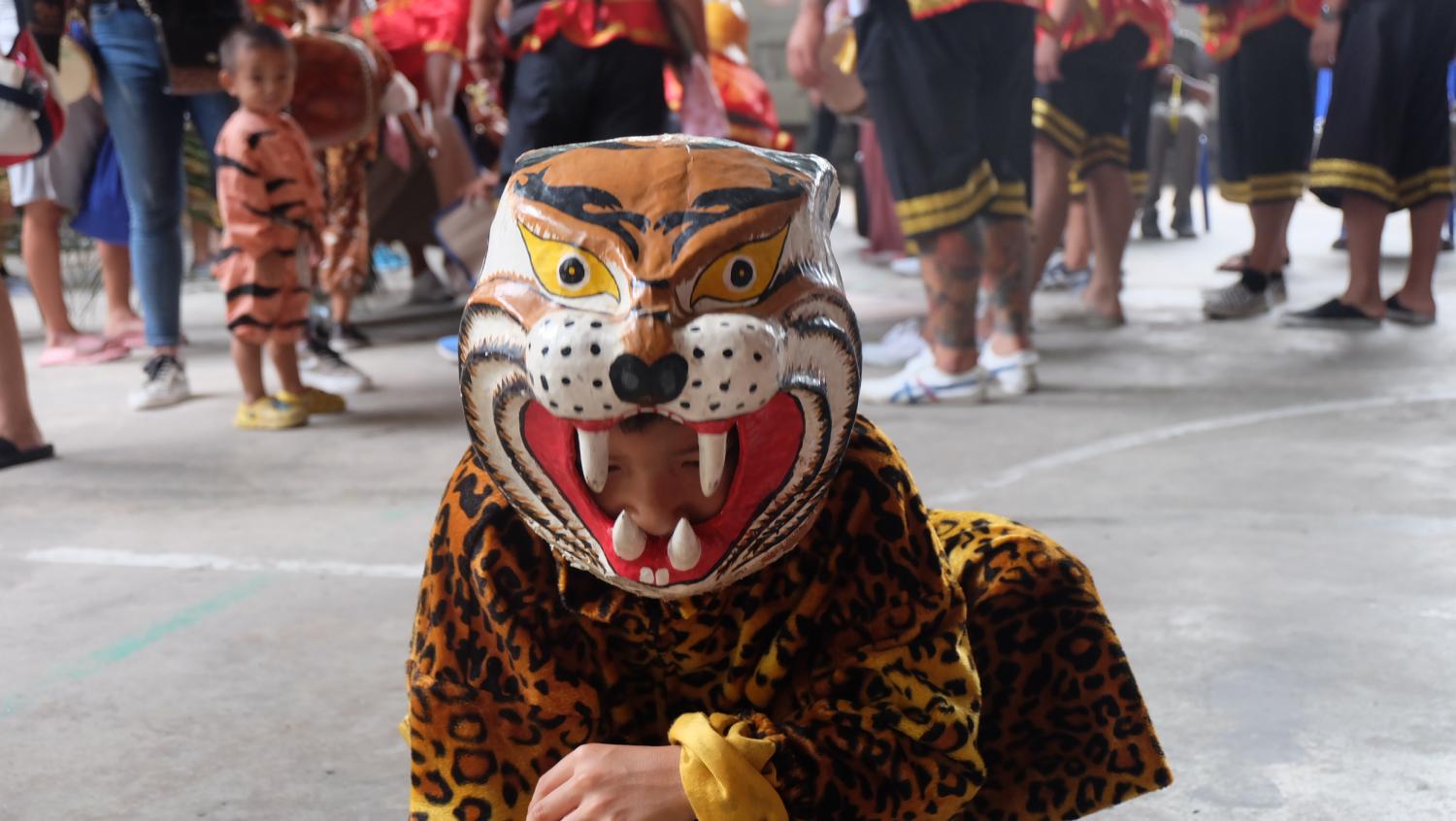 After performing a wai kru ceremony, two teenagers faced off in a schoolyard. Shouting, a boy in red sprang to his feet to charge his opponent in black, who warded off the attack and kicked him like a crocodile thrashes its tail. Undaunted, the boy in red fought back. They took turns until the boy in black caught his rival's left hand and stabbed him to death.

It is part of a krabi krabong performance by students from Thon Buri Woratapee Palarak School. Phatcharaphon Banditketmala, the instructor, inherited mentorship from his late teacher. The vanishing martial art originated in the era of Thon Buri. When King Yotfa (Rama I) moved the capital from Thon Buri to Phra Nakhon, armies were left there, hence the name Wang Lang.

"As time has gone by, martial art has become a spectacle, but it is still a real fight because students can use it for self-defence. Our style can be traced to Luang Rak in the court. It was passed down to my late teacher," he said. "When I was young, I learned it just for fun, but now I want to preserve it."

Phatcharaphon said practitioners are required to pay respect to spirits, which are believed to protect them from harm or, in case of misconduct, punish them. Basically, they must undergo an initiation rite to become students and perform the wai kru ceremony. Even weapons must be revered. Other rules, however, have been relaxed.

"In the past, they were not allowed to learn from other teachers or practise in public. These rules prevented the dissemination of martial arts. Now, students are very creative because they pick up poses from movies and gymnastics and adapt them. If we stick to the same old thing, it won't get us anywhere," he said.

The performance was followed by a tiger chase show. In the story, a hunter, his wife and two children are assigned to chase a pack of wild tigers ravaging a town in exchange for a reward. Paisarn Suwannachai, a performer of the 50-member troupe at Wat Bang Sakae Nok, said they recently inherited the show from their late teacher.

"Kratua taeng suea is mentioned in historical records. It is an adaptation of the buffalo hunt performance in the court [since the Ayutthaya period]. In the reign of King Rama IV, foreigners had tigers jump through hoops, hence our adaptation," he said. "There are now only 30 troupes [in Thon Buri]. Performers are giving it up."

Also joining the cultural festival were kite makers. Soi Bang Sakae is home to famous practitioners who master the art of controlling chula and pakpao kites skilfully. However, urbanisation is encroaching on open fields where they fly kites. Seree Sudjinda, a veteran of World War II, founded a conservation group in the 1980s and is one of the last bastions of kite culture today. 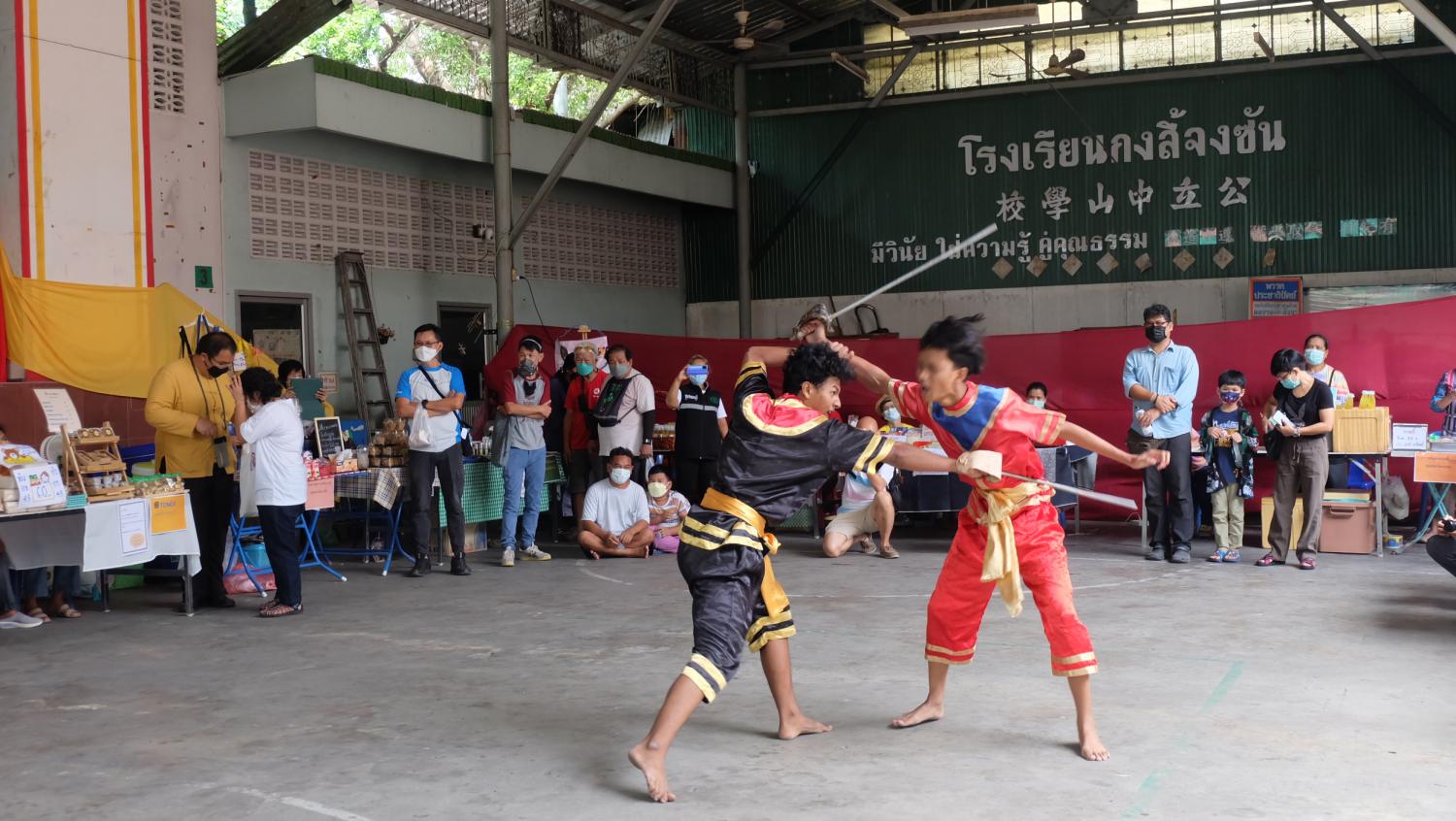 While performers were in the yard, Chanokwan Thumtieng, director of the new Kongleechongsun School, recalled her early years when she taught here. She said people revere Pueng Thao Kong because he comforts them and fulfils their wishes.

"From the outside, the school is so small that nobody could imagine teaching activities. Students gathered in this yard to sing the national anthem in chronological order to avoid the traffic. Before we moved, there were around 700 students, double from when I started my job [two decades ago]," she said.

Chanokwan said alumni play a crucial role in subsidising the school. When it planned to relocate, they raised funds to build the new school. It does not charge tuition fees but collects only donations of 1,000 baht per semester for utility bills. Currently, there are around 1,150 students.

"We are working for the benefit of the community and students come from middle and lower-income backgrounds. Inspectors once told me, 'This school is impoverished because it doesn't have any facilities'. However, they were surprised to find that, when a bell rang, students came out of every nook and cranny," she said.

Many alumni revisit their alma mater. "I studied here for eight years," said Arton Poonsiri, a veteran of the Vietnam War, who encapsulated his memory in a wide range of wooden toys for sale, such as nai lert ships and two-deck cargo ships that sailed between Pak Khlong Talat and Suphan Buri. 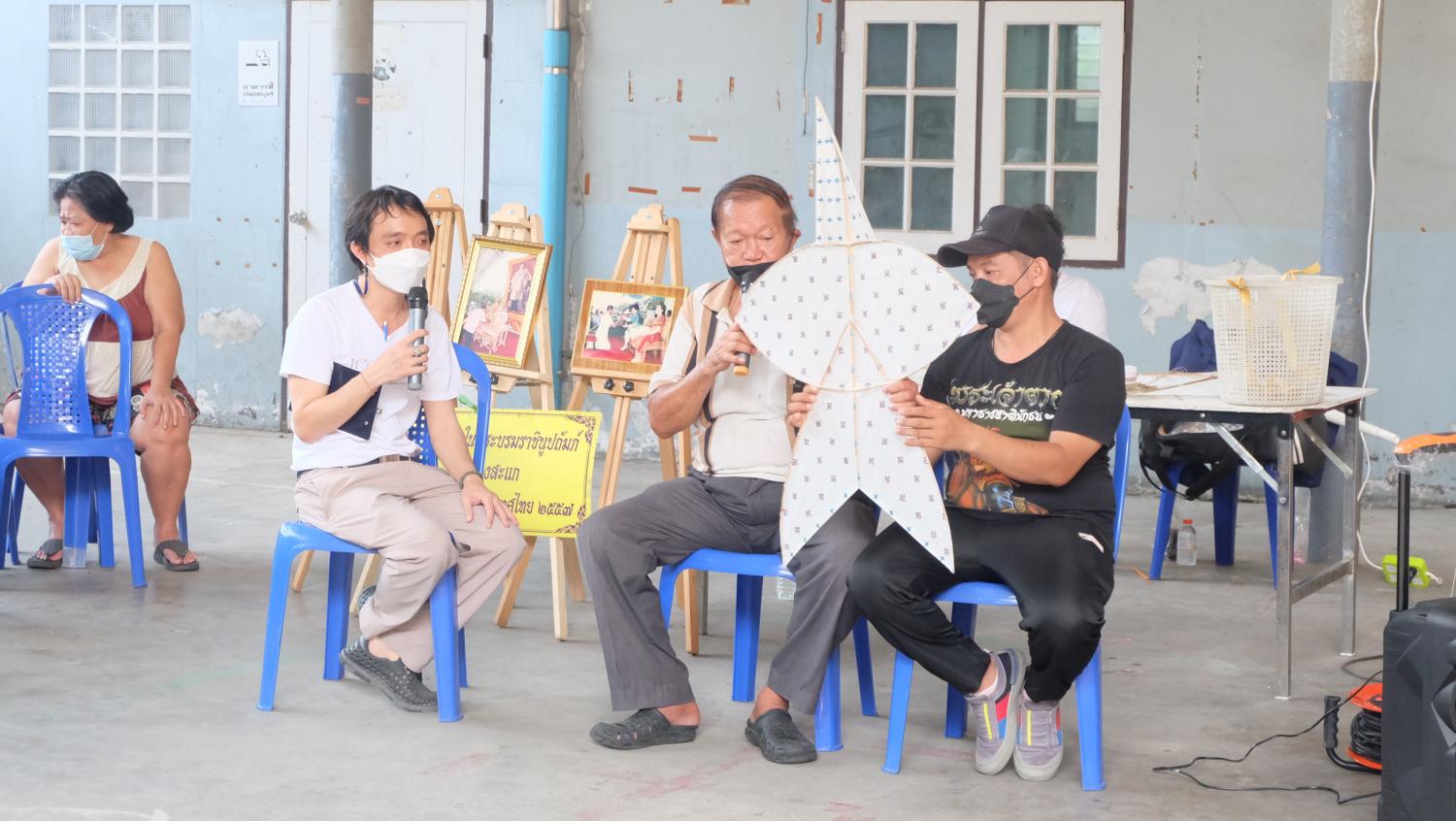 From old school to museum

"Our community is a cultural hub," said Charlidar Tanhakarnjanakun, a member of the Talat Phlu Doodee Group founded by community residents four years ago to promote cultural heritage in the neighbourhood. It organises a wide range of activities from workshops and performances to walking tours.

"Born here, I was just going through life until I returned home permanently. There are temples, mosques and food. For example, Uncle Teedum makes charcoal-grilled kanomkhai [egg cake], which will come to an end in his generation because his descendants don't want to continue it. I began writing about them on Facebook and opened a page," she said.

The cultural festival receives support from the Thon Buri Mee Khlong Project, a collaboration between the Arsom Silp Institute of the Arts and other development networks. Wanmai Niyom, manager of the project, said the old Kongleechongsun School will be renovated and developed into a museum because community residents are strongly attached to the place.

"It is a suitable place to tell stories. Talat Phlu is more than kui chai [steamed Chinese chive dumplings]," he said. "However, renovation won't affect surrounding buildings. It will be decorated in a clean modern style and blended with the shrine." 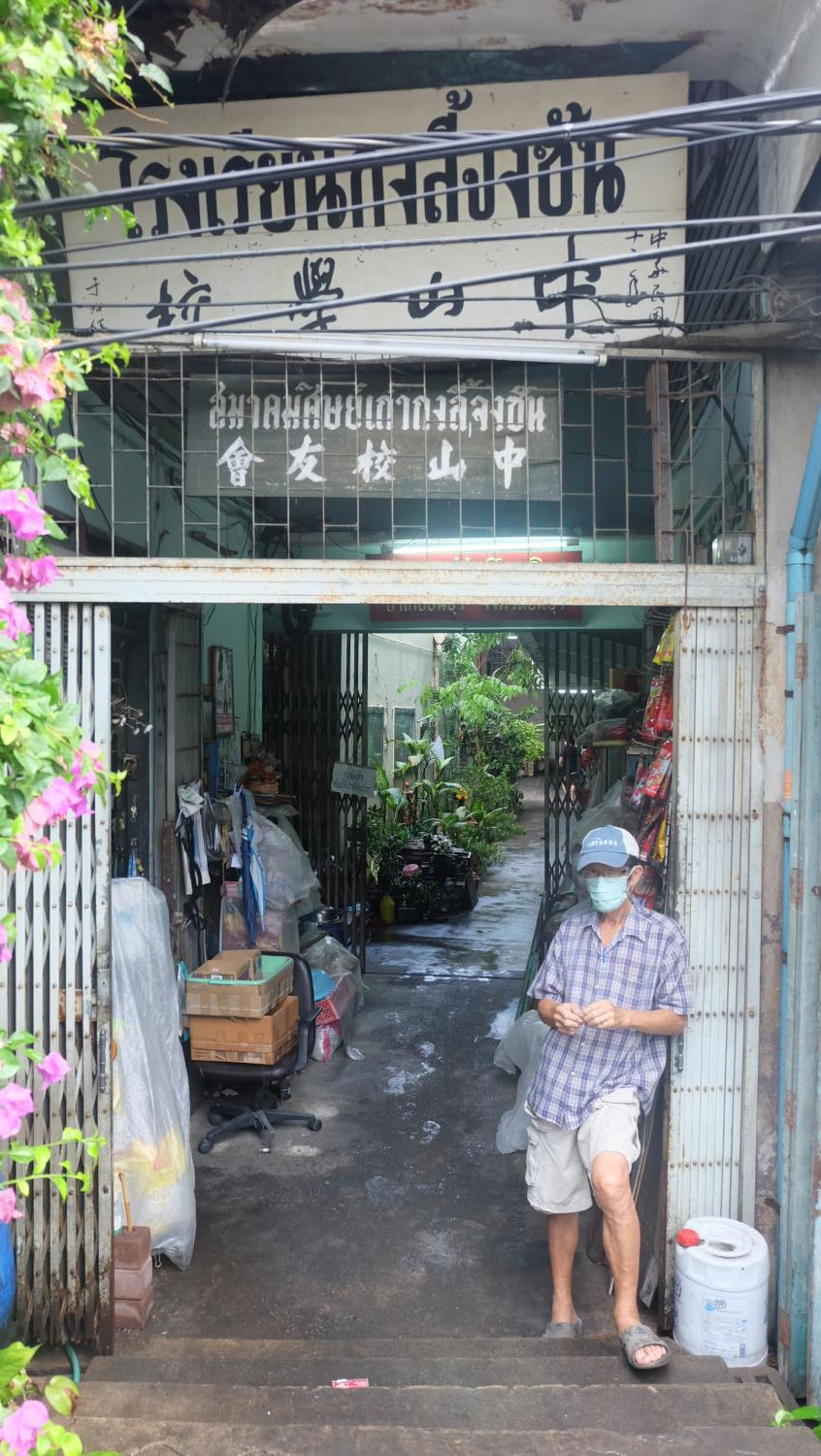 An entrance to the old Kongleechongsun School. (Photo by Thana Boonlert) 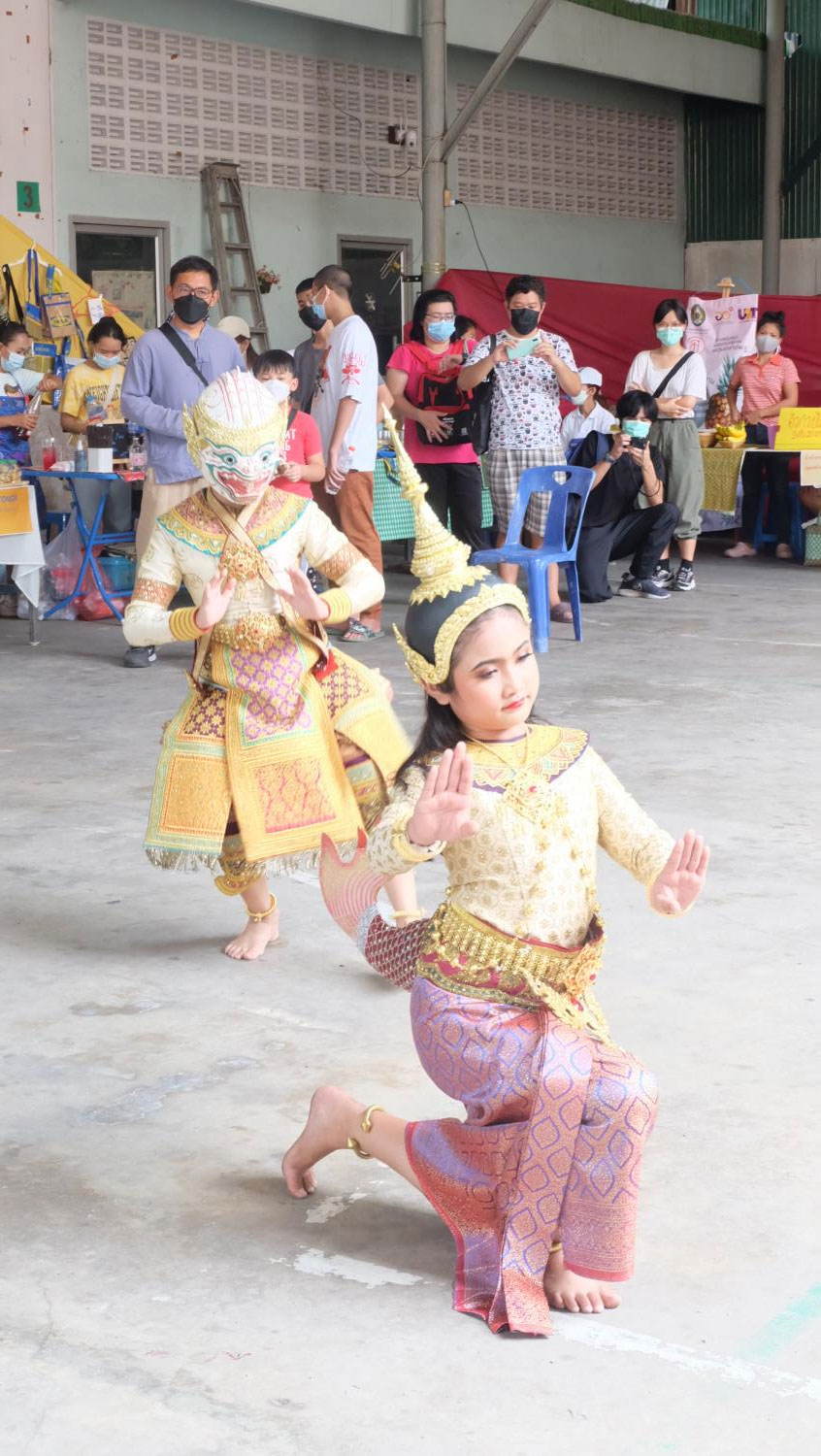 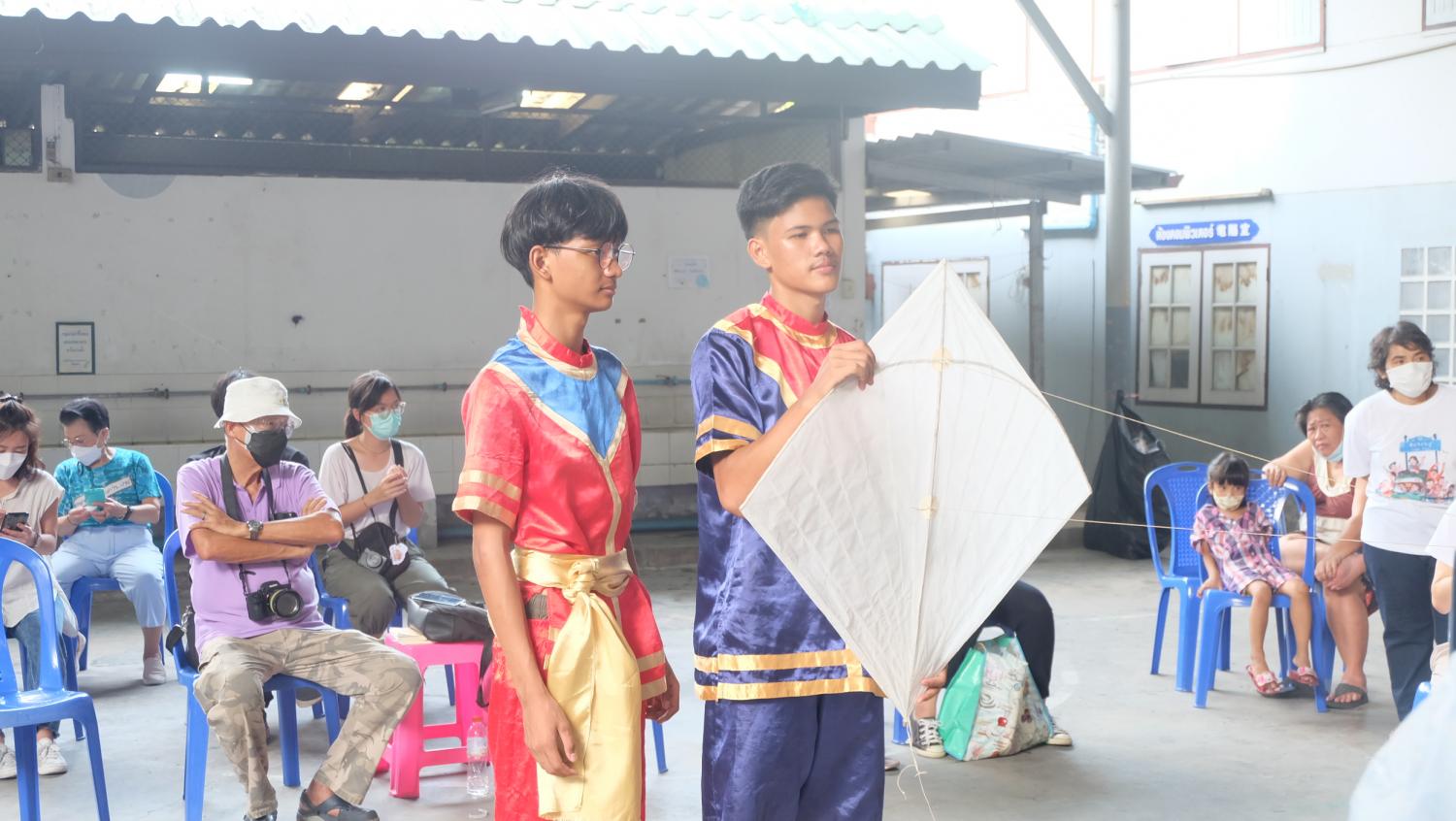 'Like a dream': Japanese grandpa draws in following as art YouTuber