A conscript in Nakhon Ratchasima has been nabbed for a cold-blooded killing of a customer outside a hairdresser's shop.

Chokchai police arrested Pvt Saharak Kortrawut, 22, after he shot Anuwat Kuanhat, 35, in the face on May 14. Both men had been waiting for a haircut when an apparently innocent exchange between the pair set off Pvt Saharak into a murderous rage. 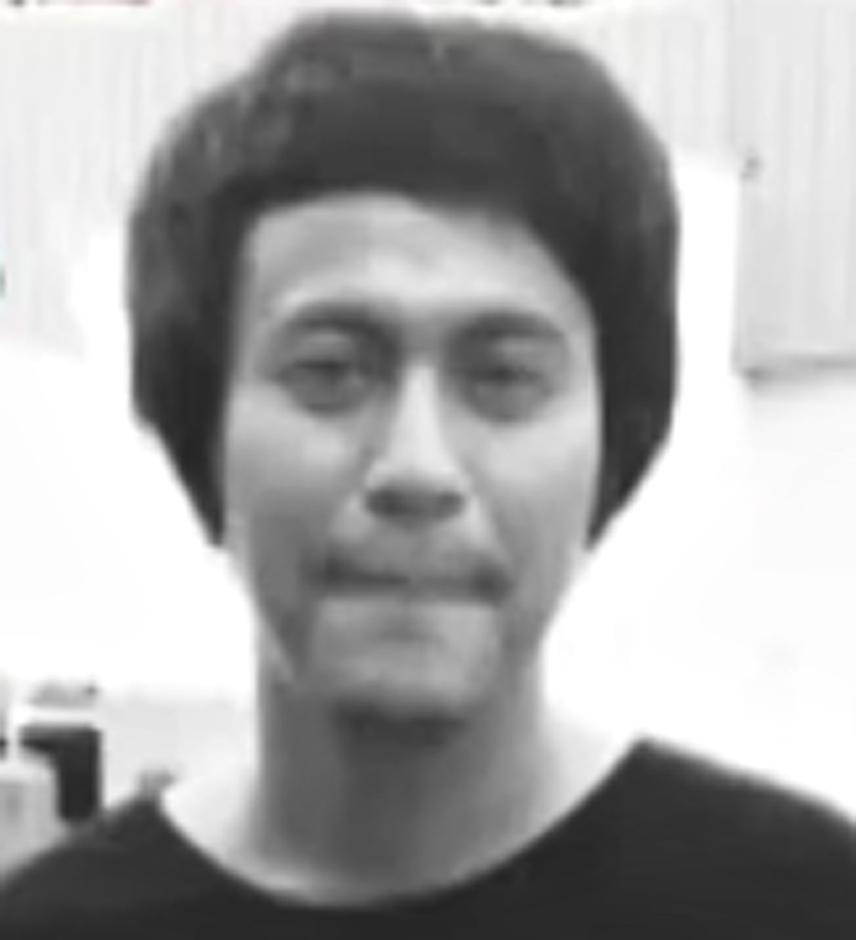 Anuwat told him he could park his vehicle in front of the shop, only to be contradicted later by the hairdresser, who was worried his black Ford would obstruct traffic. Witnesses say this upset the conscript, who went to his vehicle, fetched a gun, and shot Anuwat twice in full view of his girlfriend.

Anuwat's girlfriend, who was not named in news reports, said Anuwat spoke politely to the conscript, who was initially content with the answer, as both men waited their turn to have their hair cut.

Both were regular customers, with Pvt Saharak getting his haircut there since he was a child. However, they did not know each other. Witnesses say he parked his vehicle in front of the shop, and asked Anuwat if he could leave it there safely. "He replied that he could but warned him that the shop is next to a narrow crossing and the vehicle might get hit. Pvt Saharak decided to leave it there, bought a beer and sat in front of the hairdresser's as he waited," the witness said.

Later, the hairdresser came out to tell Pvt Saharak to park opposite because leaving it there would hamper traffic. "He did as asked but was clearly angry. He parked the Ford opposite and got out holding a rifle, shot the victim and drove off," the witness said.

The victim, originally from Lop Buri, worked as a tradesman at a nearby factory. He initially came for a haircut the day before, but the shop was busy so he turned up again the next day. "He and his girlfriend went for a noodle and when they returned they sat and waited. Pvt Saharak turned up later," he said.

While he was attending to a customer, he saw a cloud of black smoke enter the shop. "I heard someone ask Pvt Saharak what was wrong with his vehicle and he said he forgot to release the handbrake. Shortly after that I heard the gunshot. That was followed by another shot, and I saw Anuwat hit the ground."

The owner of a dried goods shop next door where the shooter bought his beer, Prapapat Padkratork, 44, said she was standing by the counter when the first shot rang out. "My customers and I ducked behind the counter or hid inside the shop," she said.

Pranee Maikratoke, 48, who sells noodles nearby, recounted the scene following the shooting. She said she saw Pvt Saharak throw his gun into a rubbish bin in front of the hairdresser's shop, and sit on a school wall across the road as he surveyed his handwork. "A few minutes later he came back to retrieve his gun and drove off. I was worried when he came back that he would go on a shooting spree like the Terminal 21 Shopping Centre massacre," she said.

Pvt Saharak's grandmother, Hong, 75, said he had been a conscript for the past 3-4 months and comes back at weekends to see his parents. "We knew he had a gun, but I didn't know he was carrying it in the vehicle. I don't know why he did it but Saharak has been treated for a psychiatric condition in the past," she said.

Pol Col Boonprod Prasertsak, head of Chokchai police, said Pvt Saharak was upset after being told to park somewhere else. He was charged with premeditated killing and a firearms matter, and consigned to a military court holding cell at the 21st military circle infantry battalion to await further action.

Navy Seal gets his own back

An aggressive debt collector was shot dead for his troubles after punching the husband of a debtor in Chon Buri. 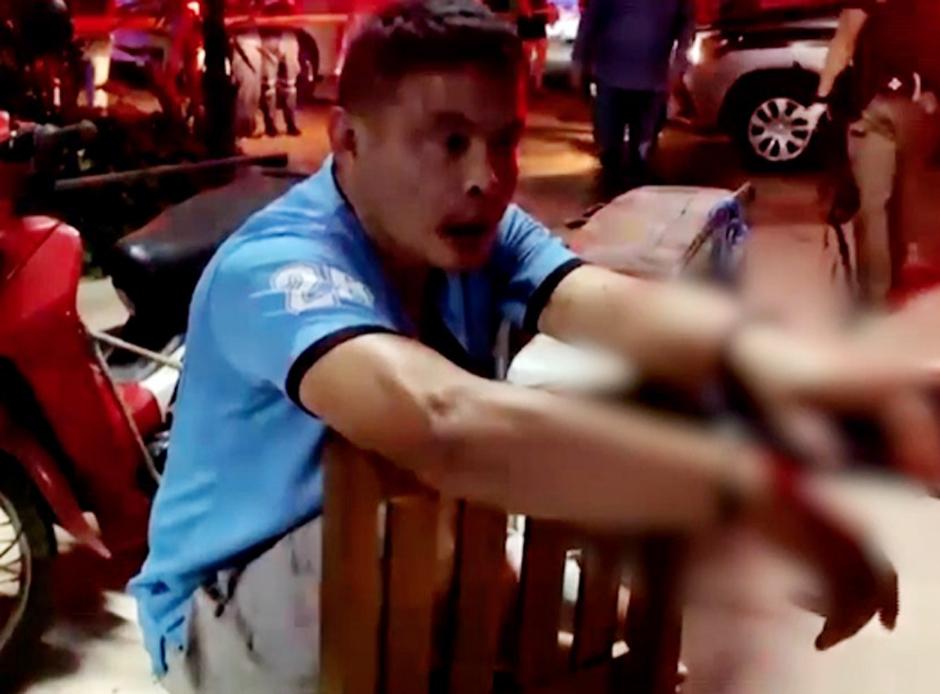 Sattahip police nabbed trader Kanpongpisut Yaichaingnua, 45, also a Navy Seal, after he shot Prairat Rungroj, 50, in a dispute over an outstanding 10,000-baht debt. Prairat turned up at his som tum/steak shop in Soi Rungrot, Bang Sare, with a bunch of heavies on May 15 to demand repayment of the debt owed by Mr Kanpongpisut's wife, who was not present.

He demanded Mr Kanpongpisut pay up immediately, brushing aside his offer to arrange a loan from his navy employers. His stepdaughter, Bongkot Pinta, 22, said Mr Kanpongpisut said he could not find the money straight away. This upset Prairat, who abused and punched him, even though he was holding a one-year-old relative at the time.

Ms Bongkot said she took the boy from her father's lap when she saw the exchange turn sour. Mr Kanpongpisut, she said, headed inside, grabbed his Derya semi-automatic, and shot the victim in the head, neck and hand. The heavies who had accompanied Prairat fled, but Mr Kanpongpisut stayed put until police arrived. He was charged with intentional killing.

Somporn, 85, (assumed name), the victim's mother, said she sold a plot of family land two years ago and divided the money up among her children, including Prairat, who received 1.5 million baht.

"As a generous man he was often approached by locals wanting to borrow money, and I suspect Mr Kanpongphisut's wife was one of those," she said. "The shooter went too far; they should have talked it out first. My son was a good man, although he could speak strongly to people," she said.

Intruder never had a chance

A Chaiyaphum woman can thank security cameras for saving her younger sister from a potentially hazardous encounter with an ex-convict who had served jail time for rape.

Chompunut Pimsin, 27, posted to social media clips taken from a CCTV camera at her home on May 17. They show an intruder, Chokdanai Luesaen, 33, letting himself in while her younger sister, 26, was inside alone.

Chokdanai, from Nong Bua Yai in Chatturat district, was recently released from jail on theft charges but had also served time for the rape of a woman, aged 60, in Nakhon Ratchasima three years ago, police say. The clips show him entering through a sliding door, and covering his face as he prepared to confront Ms Chomponut's younger sister, who was in an adjoining bedroom. The other occupants had gone out; Ms Chompunut to work nearby, and her husband on an errand.

In a fortunate coincidence of timing, Ms Chompunut said she checked the CCTV inside her home remotely via her phone to see if her husband had left yet, only to see Chokdanai entering her living room. She called the police and her husband, and also alerted her sister.

The clip shows her sister entering the main room with her phone in hand. Chokdanai tells her his motorcycle has run out of fuel and the young woman suggests he waits outside instead. 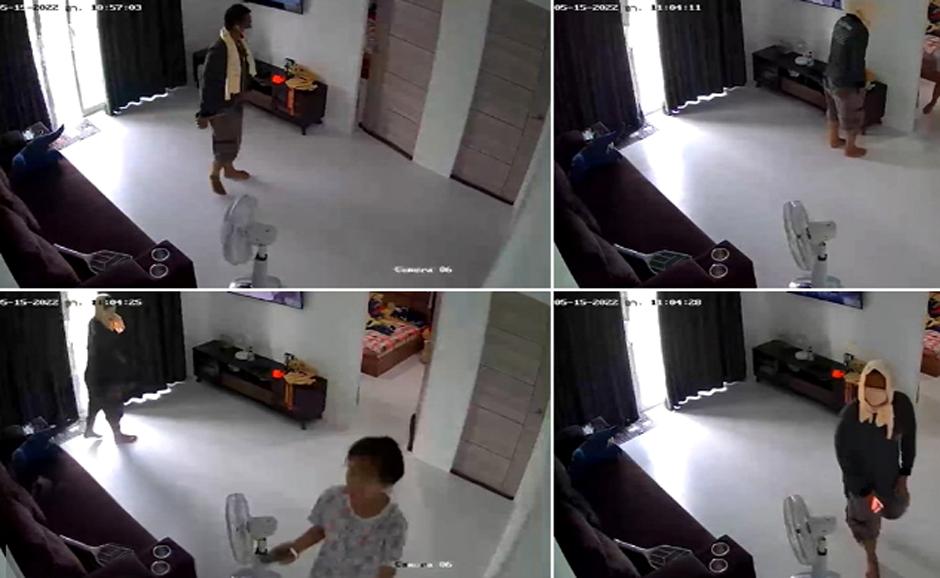 CCTV vision taken earlier from outside the house, which Ms Chompunut reviewed later, showed Chokdanai targeted the place. He was seen smoking drugs as he waited for her husband to leave. When he was sure the male occupant had gone, he let himself in through the unlocked door.

Ms Chompunut, who posted the clips to serve as a cautionary tale, said they live on a private road, with relatives on both sides. One relative was holding a wedding at the mouth of the soi and guests may have assumed Chokdanai was invited. In fact, he had been thieving goods from the area since his release from jail, police say.

Ms Chompunut's husband and father turned up to subdue Chokdanai before he could do any harm. A clip shows her husband, arriving back home after getting the alert from his wife, launching an acrobatic head kick at the intruder as he was wheeling his motorcycle away.

The two struggle briefly before Chokdanai, who complained feebly that he was putting up no resistance, was brought to the ground. News reports say that while waiting for police to arrive, Chokdanai, who knew the fate which awaited him, asked if he could smoke drugs under the tree.